An investigation reveals multiple attacks on the Ikhwan Thabit Complex in the Al Hudaydah Governorate, from March 2015 until December 2020.

On the evening of December 3, 2020, the Ikhwan Thabit Commercial and Industrial Complex, located in southern Al Hudaydah, was subject to an attack by Katyusha missiles, killing and injuring 16 workers.

Since the outbreak of the war in Yemen in 2015, the Complex has been targeted approximately 53 times. 52 of the attacks occurred in the last two years by the Forces affiliated with the Ansar Allah movement “Houthis.”

These attacks have killed 102 people and injured 60 others. Most of those killed and injured in the attacks were workers, making the Ikhwan Thabit Complex one of the most affected Yemeni institutions from the war.

The Ikhwan Thabit Complex has more than 5000 workers and employees, most of whom work at the headquarters of the complex in Al Hudaydah. It consists of several commercial and industrial facilities for the production of dairy and various foodstuffs. The complex is one of the most prominent factories in Yemen. 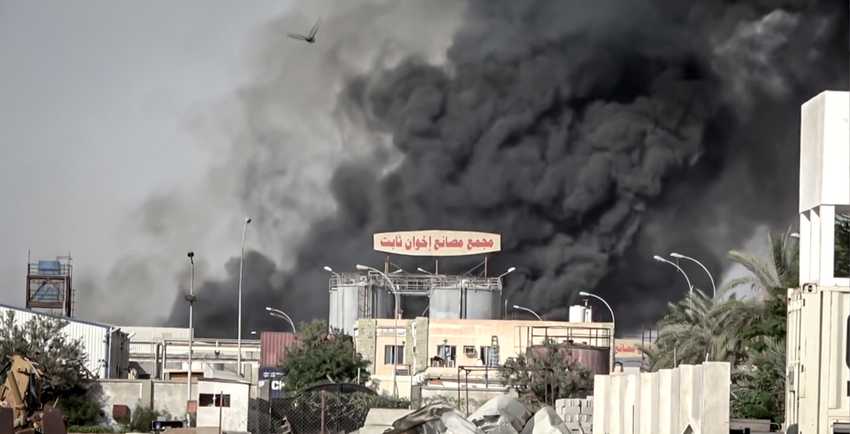 Background on the Ikhwan Thabit Complex

The Ikhwan Thabit Complex is located in southern Al Hudaydah city, which lies at the center of the Al Hudaydah governorate,adjacent to the road to the Sanaa and is considered one of the sites closest to the frontlines. These demarcations were agreed upon at the signing of the Stockholm Agreement in December 2018 between the Ansar Allah movement “Houthis” and the joint forces on the western coast.

The Complex has been under the control of the “Joint Forces on the West Coast” of the Yemeni government since November 2018. The Redeployment Coordination Committee (RCC) uses the complex as its headquarters.

The frontlines of Al Hudaydah city and along the western coast face continuous clashes and violations of truces between the parties of the conflict in Yemen. Mutual bombing between both parties is common as shelling often hits the houses near the complex, the May 22 Government Hospital, and the Red Sea wheat mill. 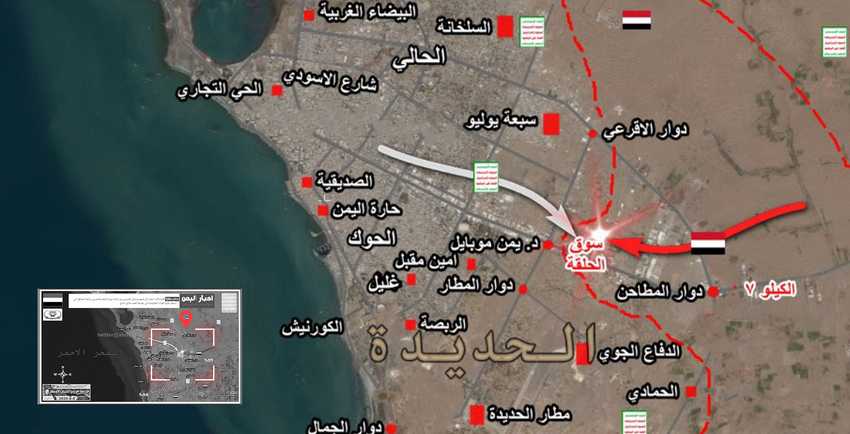 An illustrative map showing the areas of control and points of fighting in Al Hudaydah from the ”Maps of the Middle East Wars” Twitter account.

Before sunset on December 3, 2020, Social media posts, news websites, and TV reports circulated news of an attack on one of the warehouses in the Ikhwan Thabit Complex. The attack killed and injured workers in the warehouse.

Paragraph from the December 2 news site

A picture of the first claim on Twitter about the incident by a local source “West Coast twitter”.

According to open source information, the latest bombing is the 52nd attack since November 2018 by the Ansar Allah movement “Houthis” on the complex. The complex was targeted for the first time by Saudi-led coalition warplanes at the end of March 2015. These attacks significantly damaged and destroyed the Ikhwan Thabit Complex facilities as well as killed and injured workers, making the complex the most impacted economic facility in Yemen throughout the war.

A local Journalist “Bassim Al-Janani”, from the Al-Hudaydah governorate, published pictures from the recent attack showing visual information that can be used, along with scenes of prominent incidents published earlier during the past two years, to get an initial understanding of the targeted locations.

For example, videos and images from an attack on March 9, 2019, where one of the factories were hit with mortar shelling that caused fires at the front of the complex, can be used to locate imagery from the most recent attack allegedly of the complex.

After analyzing visual information from videos posted by the ”Alweyaat Al-Amaliqa Media Center” and from Yemen Today TV and matching them with satellite imagery from Google Earth, a distinct building located to the east of the factory can be seen and located at the coordinates 14.782941, 43.001385. 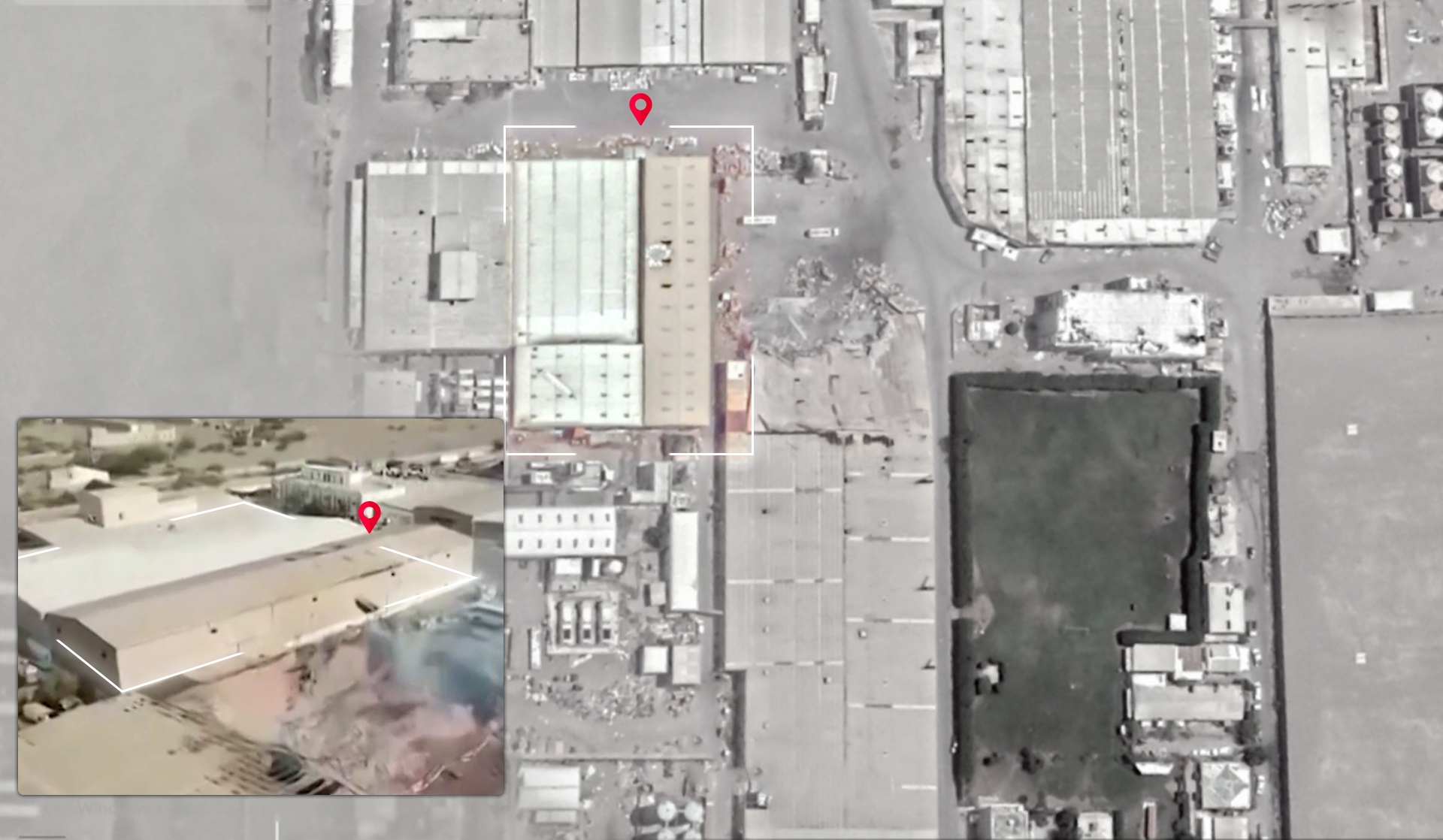 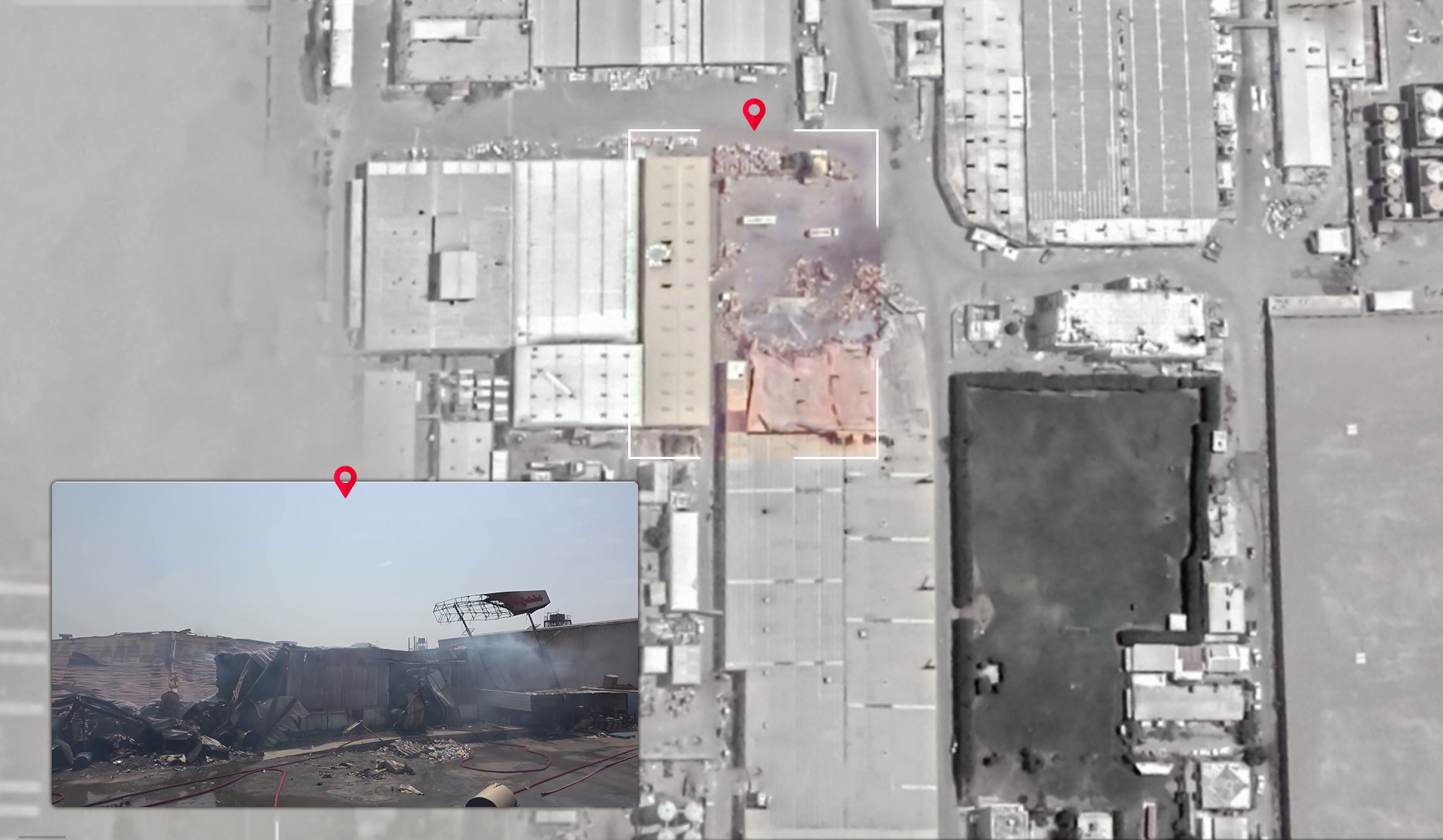 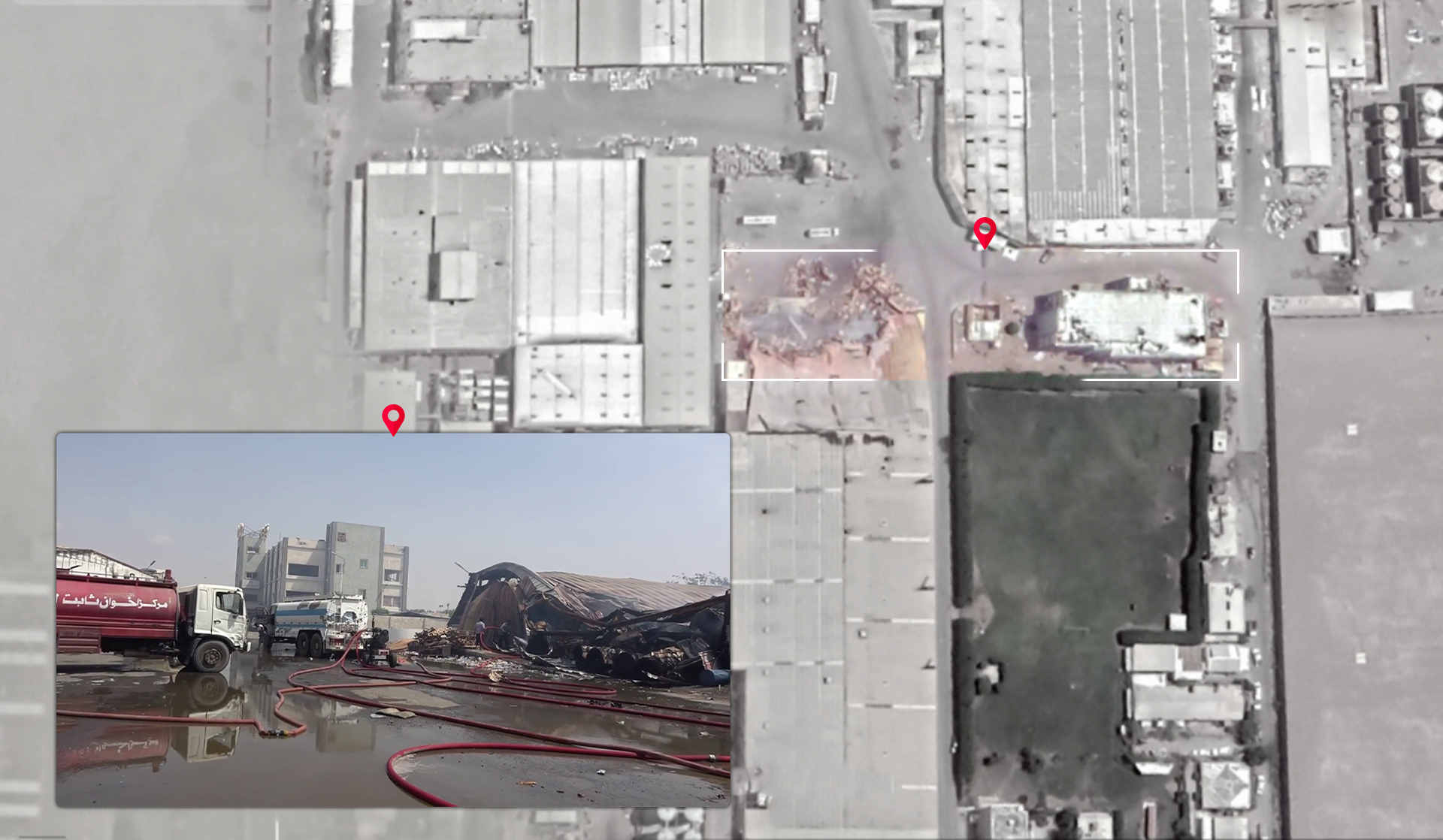 By comparing the details of the building and the texture of the stones on the outside of the building shown in the previous footage with the building that appeared in the pictures from the most recent attack shared by “Basim Al-Janani” on Facebook, a match can be made between the buildings that are shown in videos from different angles. 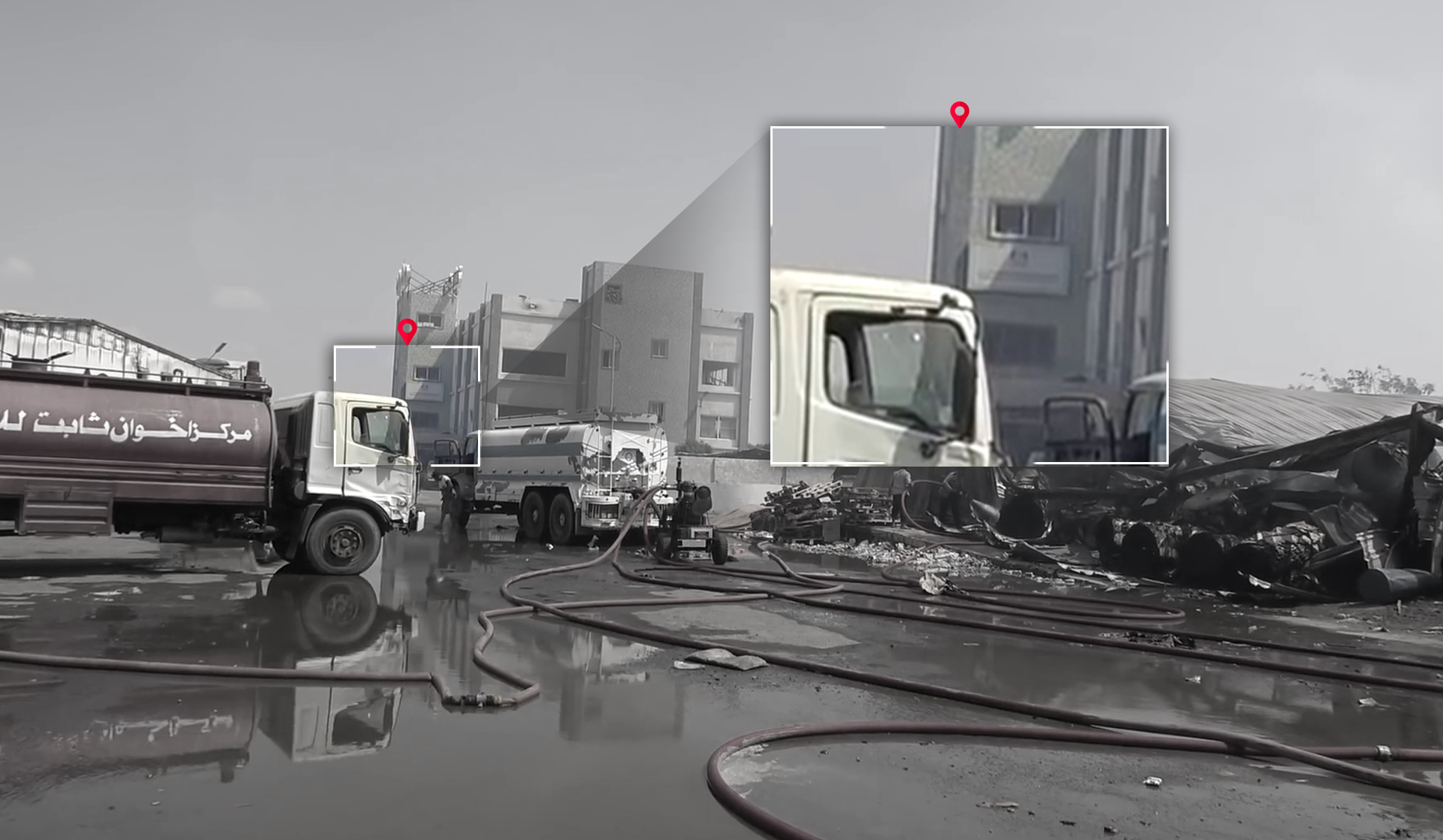 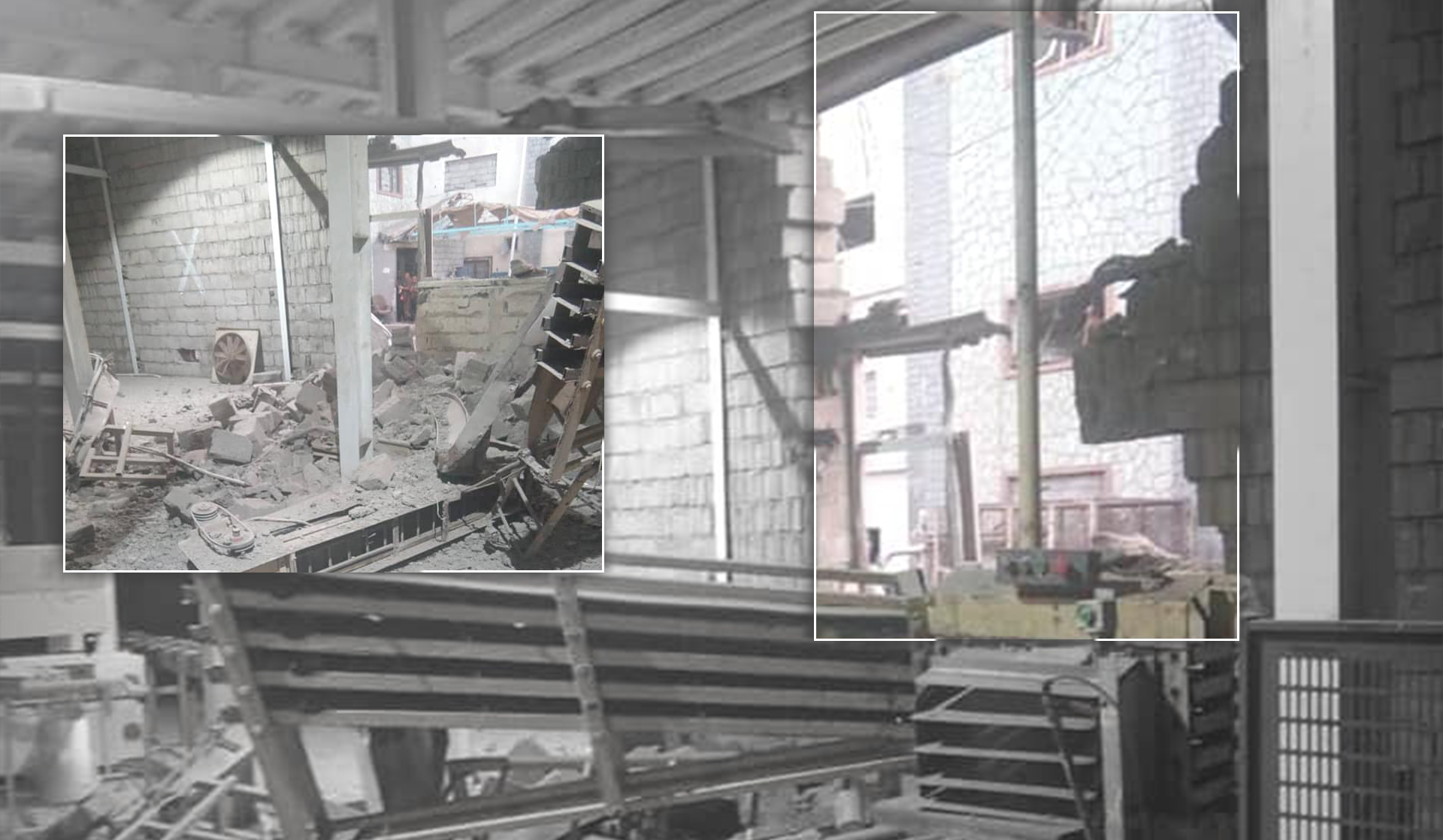 Pictures from “Basim Al-Janani” on Facebook and a screenshot from the “Alweyaat Al-Amaliqa Media Center” video.

Landmarks shown in new and old videos and pictures of the complex reveal that the targeted factory is located just opposite the building identified by a sunshade that was torn by the bombing. This matches what’s shown on satellite imagery from Google Earth, which places the building at the coordinates 14.782994, 43.002367. 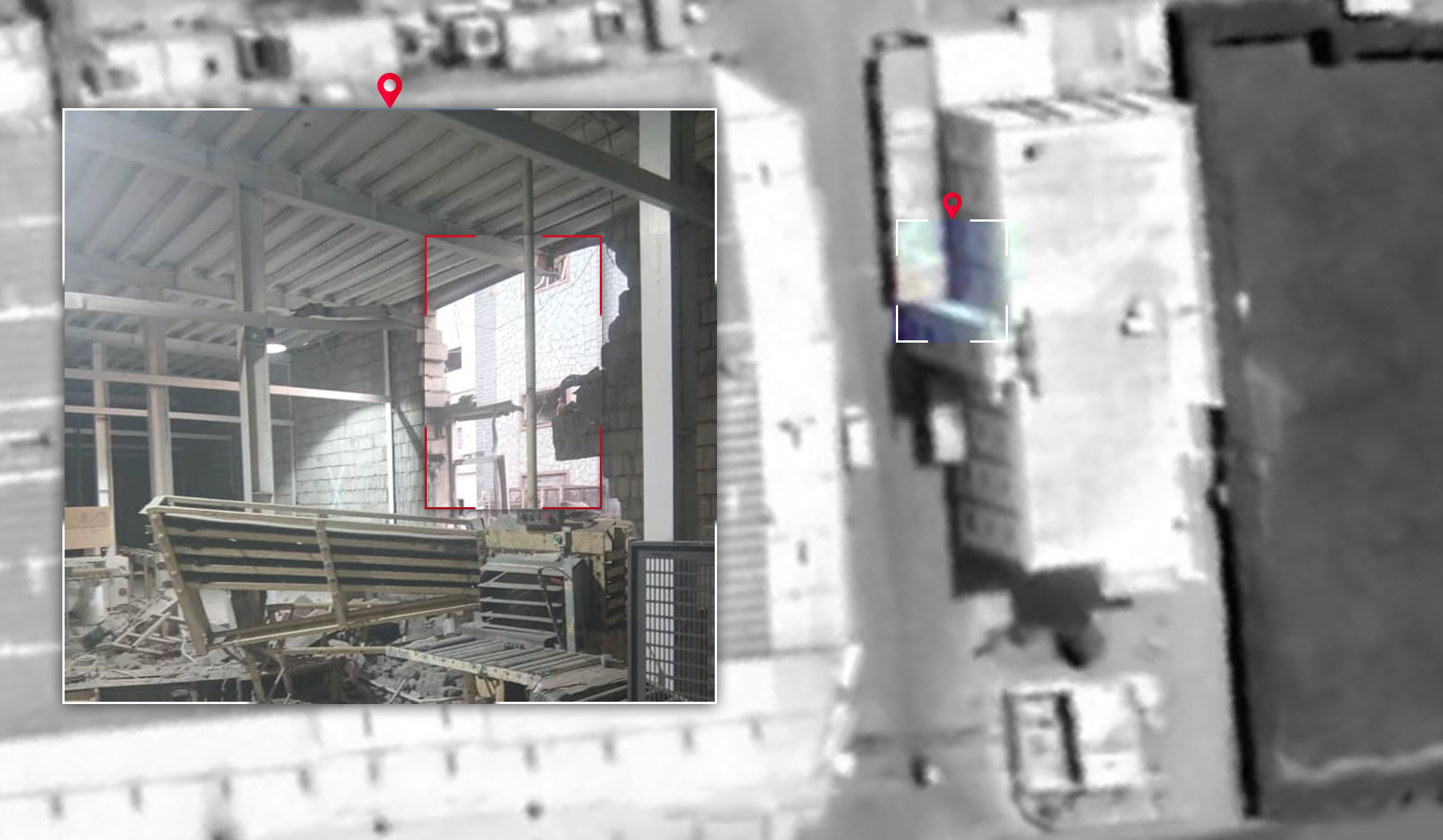 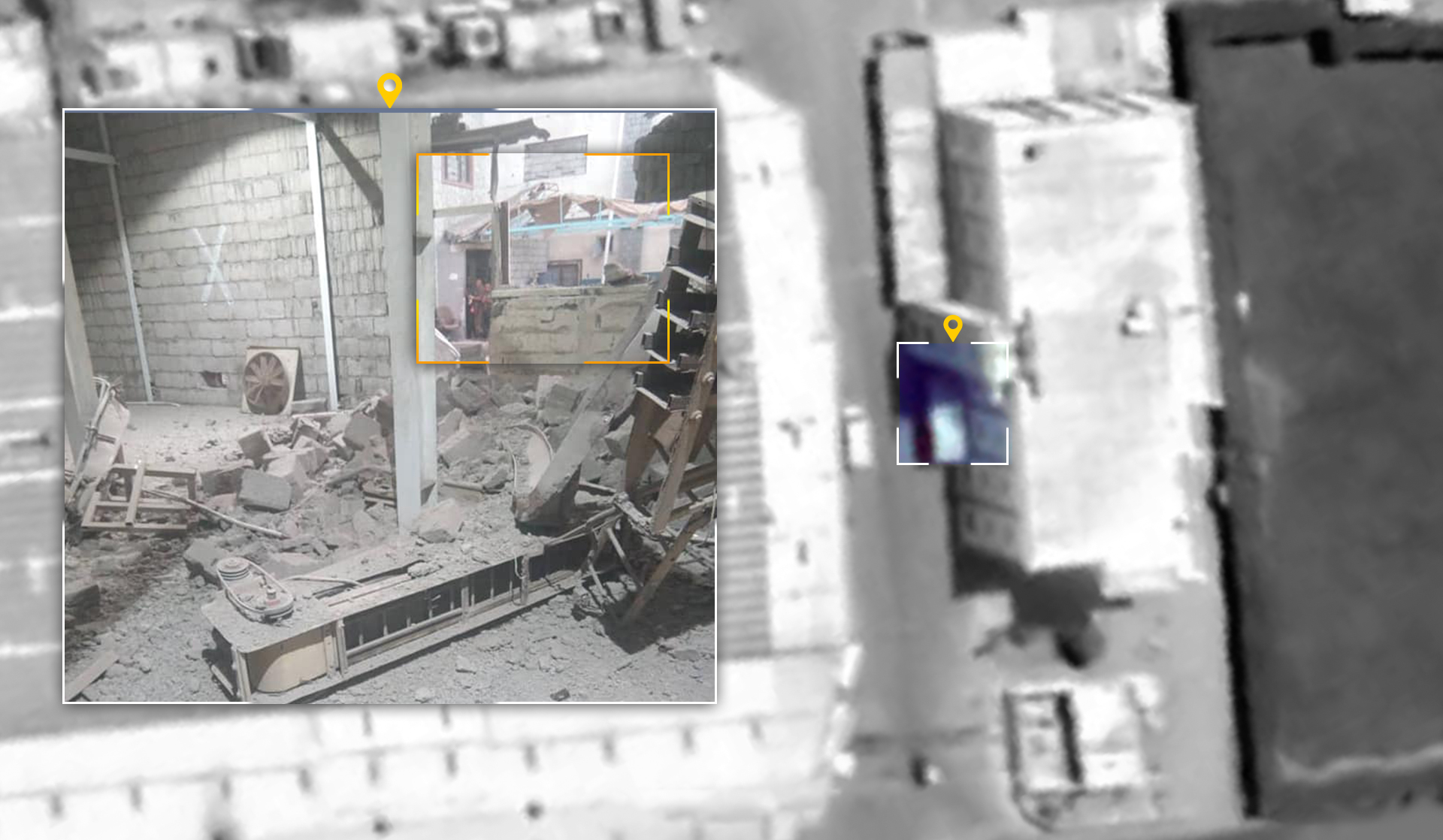 Pictures from Basim Al-Janani on Facebook page, and a satellite image from Google Earth.

On the night of October 6, 2020, in the period between the aforementioned attacks, another bombardment caused fires to the largest warehouse of the factory as is shown in “Muhammad Ibn al-Yaman’s” video on YouTube.

Although landmarks are difficult to identify in the video because it was taken at night, Satellite imagery captured two days after the date of the attack at the coordinates 14.782628, 43.004958 shows smoke rising from the area as well as other visual evidence indicating an attack on the warehouse as shown below.. 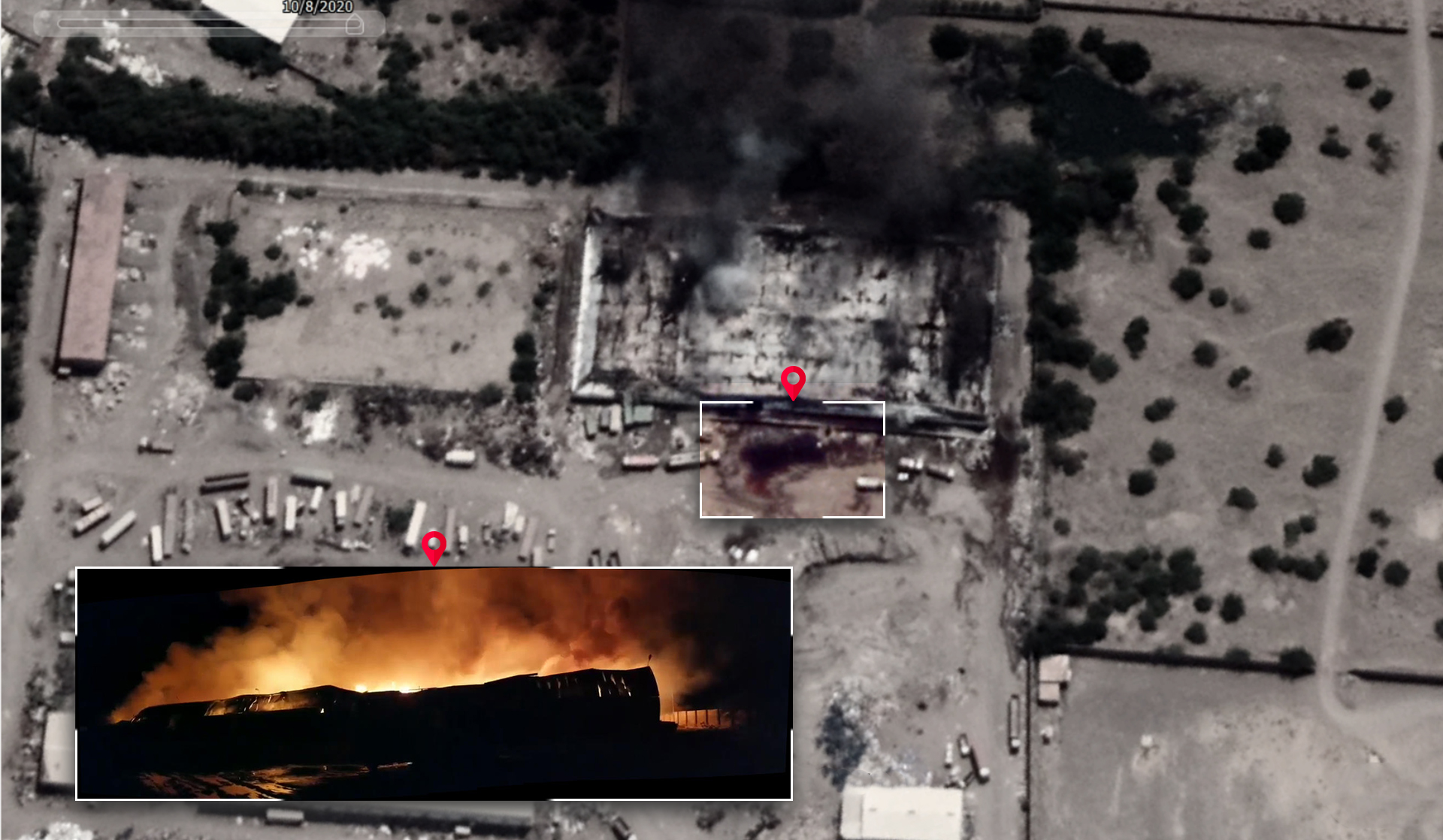 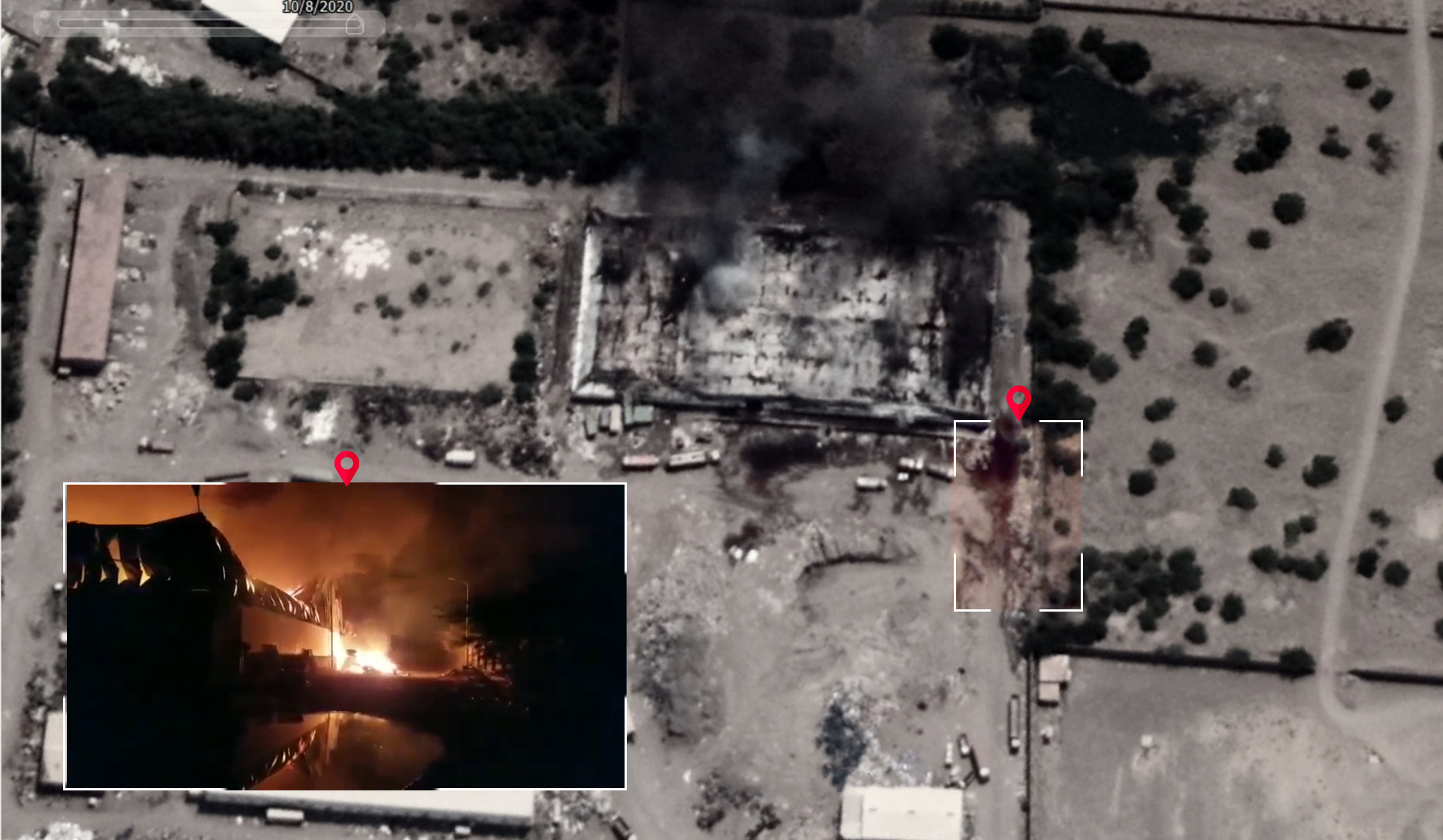 A Screenshot and panoramic image from the video shared by “Muhammad Ibn al-Yaman” on YouTube, and a satellite image from Google Earth.

A video shared by “Alweyaat Al-Amaliqa Media Center” on YouTube shows smoke rising from the industrial complex. After analyzing landmarks in the video and comparing it to the satellite imagery from Google Earth, Yemeni Archive was able to identify that a fire of several burning boxes which were collected near the complex fence can be seen at the coordinates 14.781932 , 42.997501. 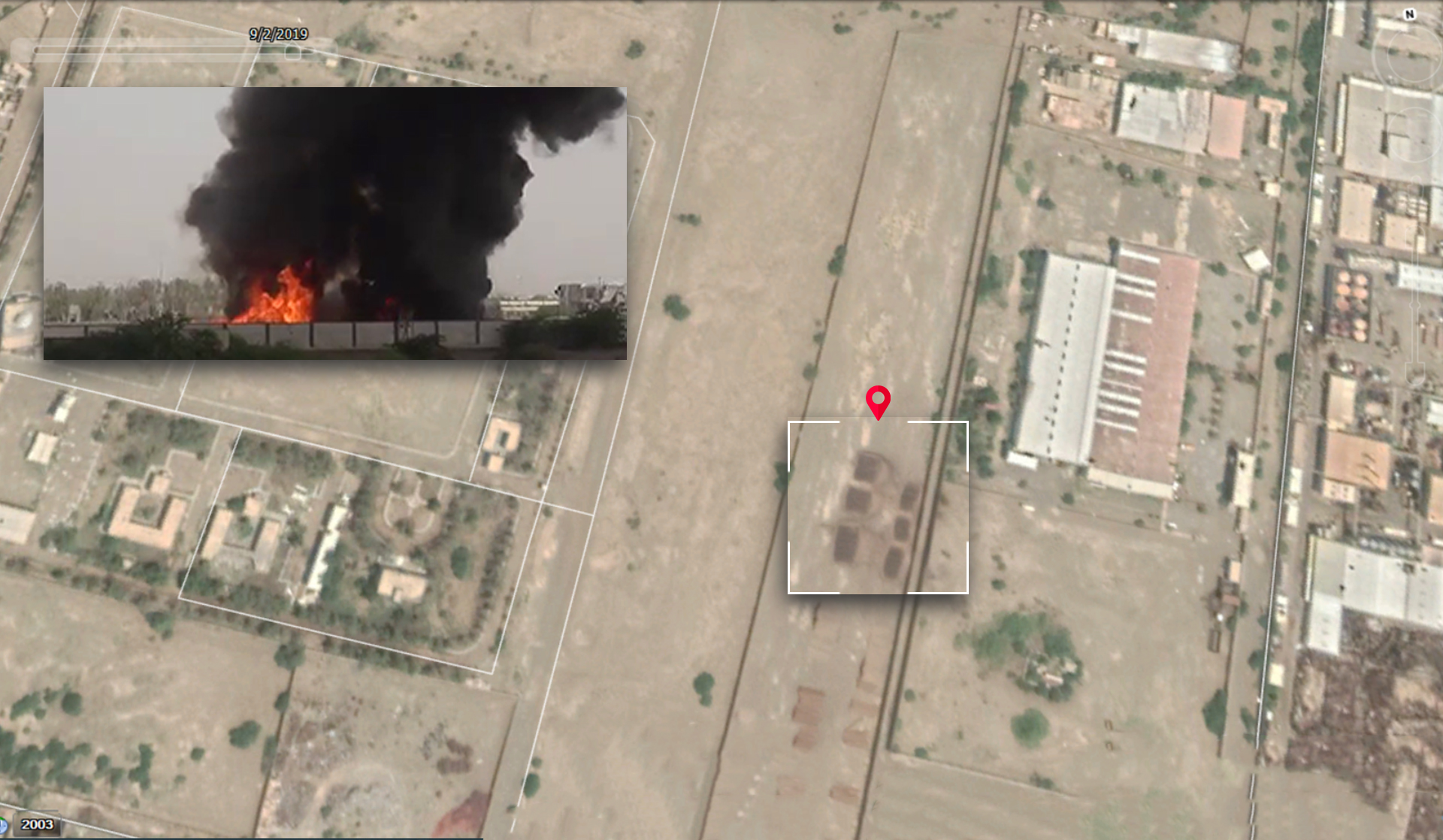 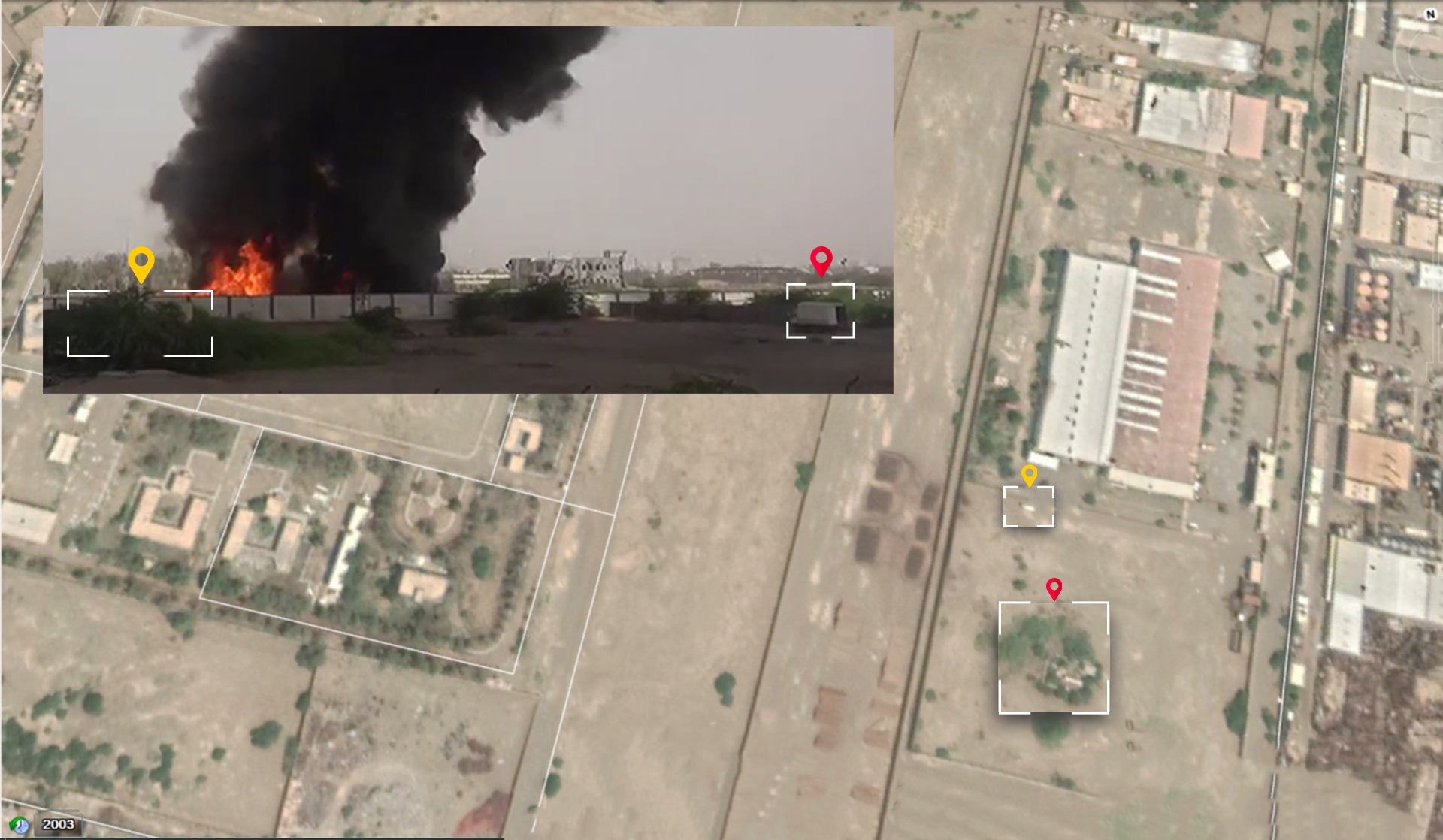 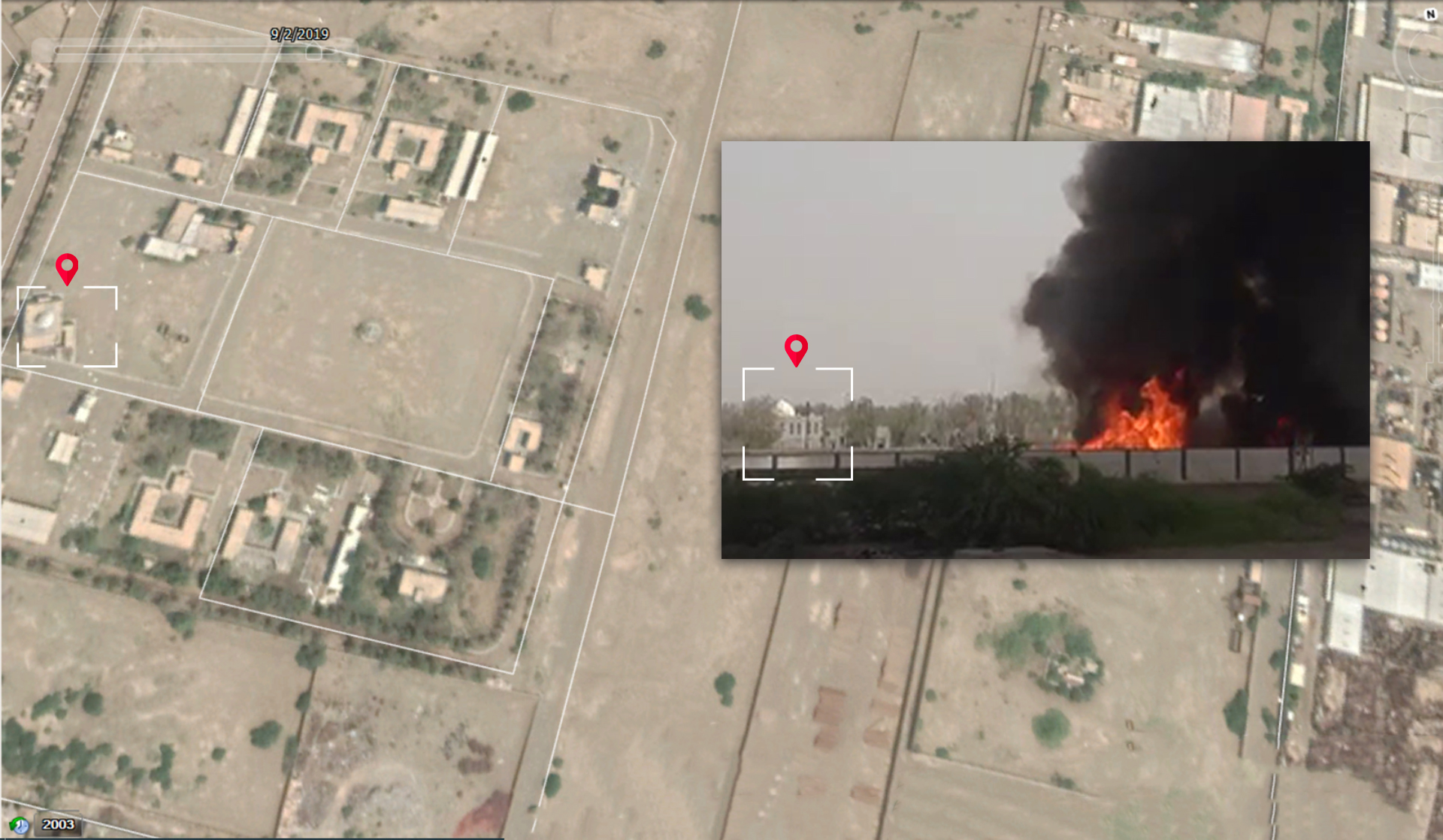 A video from the “Alweyaat Al-Amaliqa Media Center” on YouTube and a satellite image from Google Earth.

It should be noted that the first attack that caused severe damage to the complex by ground-to-ground shelling was on November 16, 2018, a few days after the “Joint Forces on the West Coast” of the Yemeni government took control of the area, which was previously under the control of the Ansar Allah movement “Houthis” since 2015.

Local websites and satellite channels circulated a video showing smoke billowing from the targeted warehouse where a fire broke out in different areas of the facility.

After analyzing a video from Yemen Today Channel showing multiple angles of the location and matching the landmarks with what’s shown in satellite imagery from Google Earth, Yemeni Archive was able to determine the location of the attack as at the coordinates 14.785018, 43.001642. 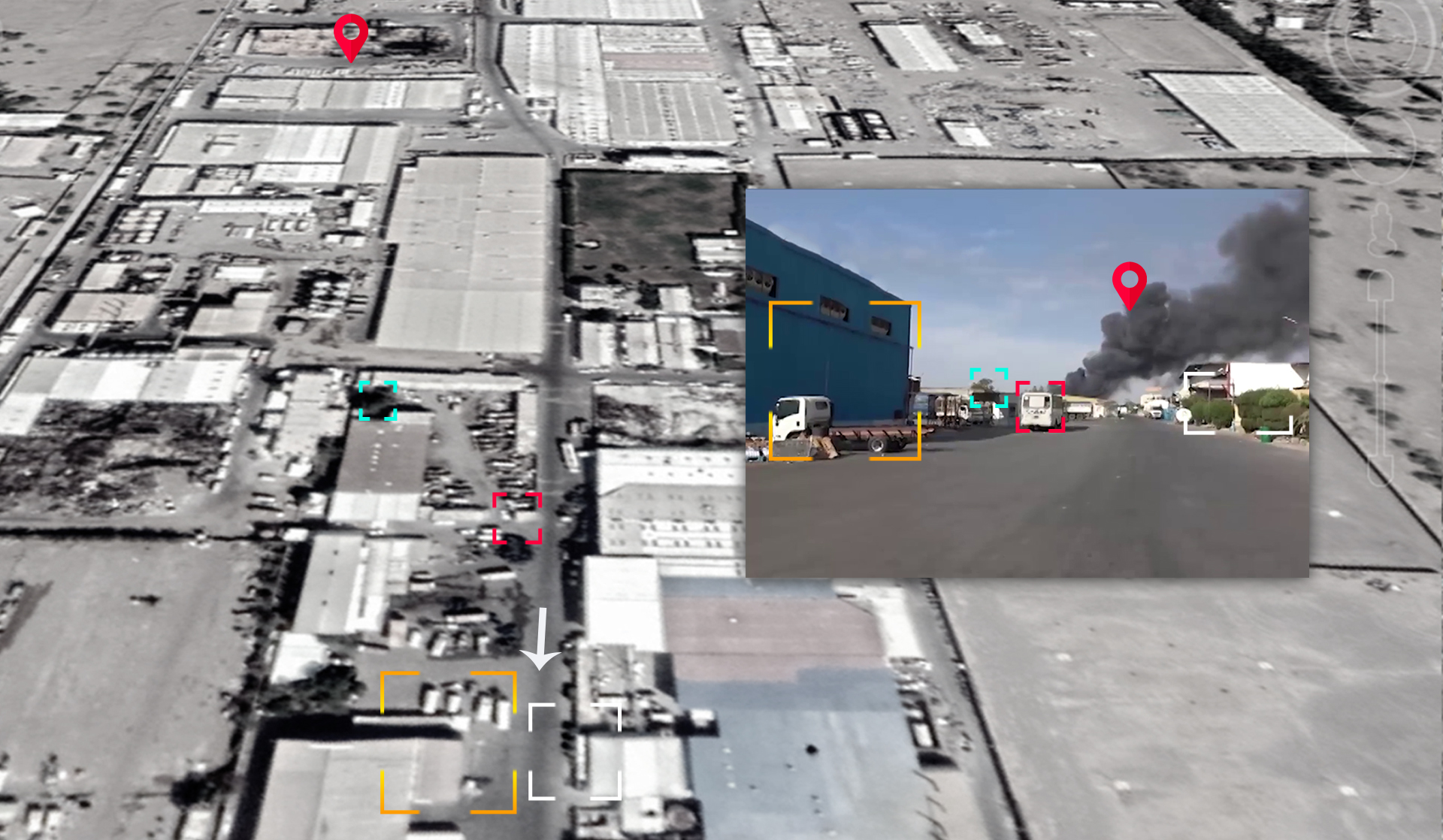 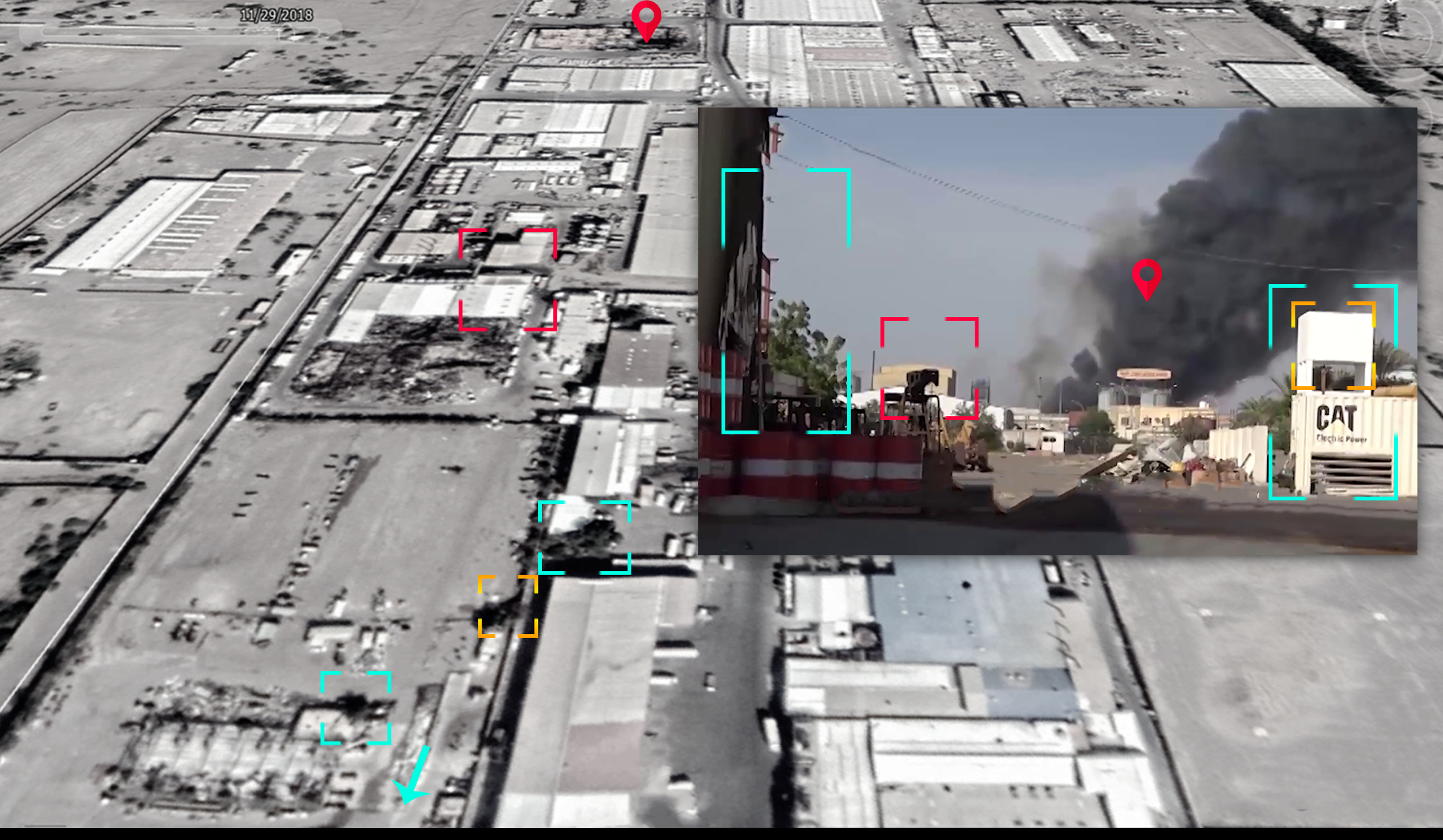 Footage from the Yemen Today Channel video and a satellite image from Google Earth. 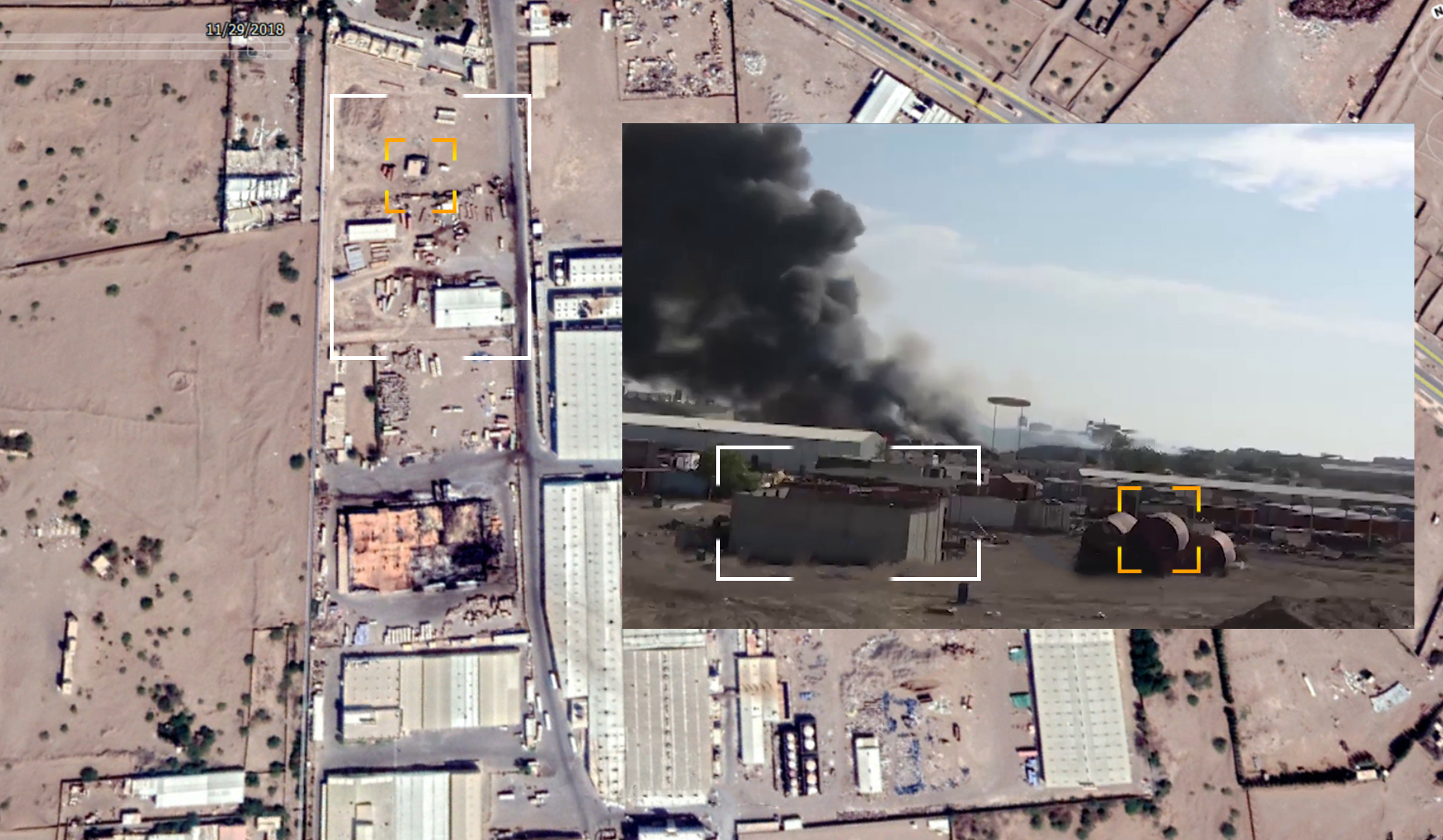 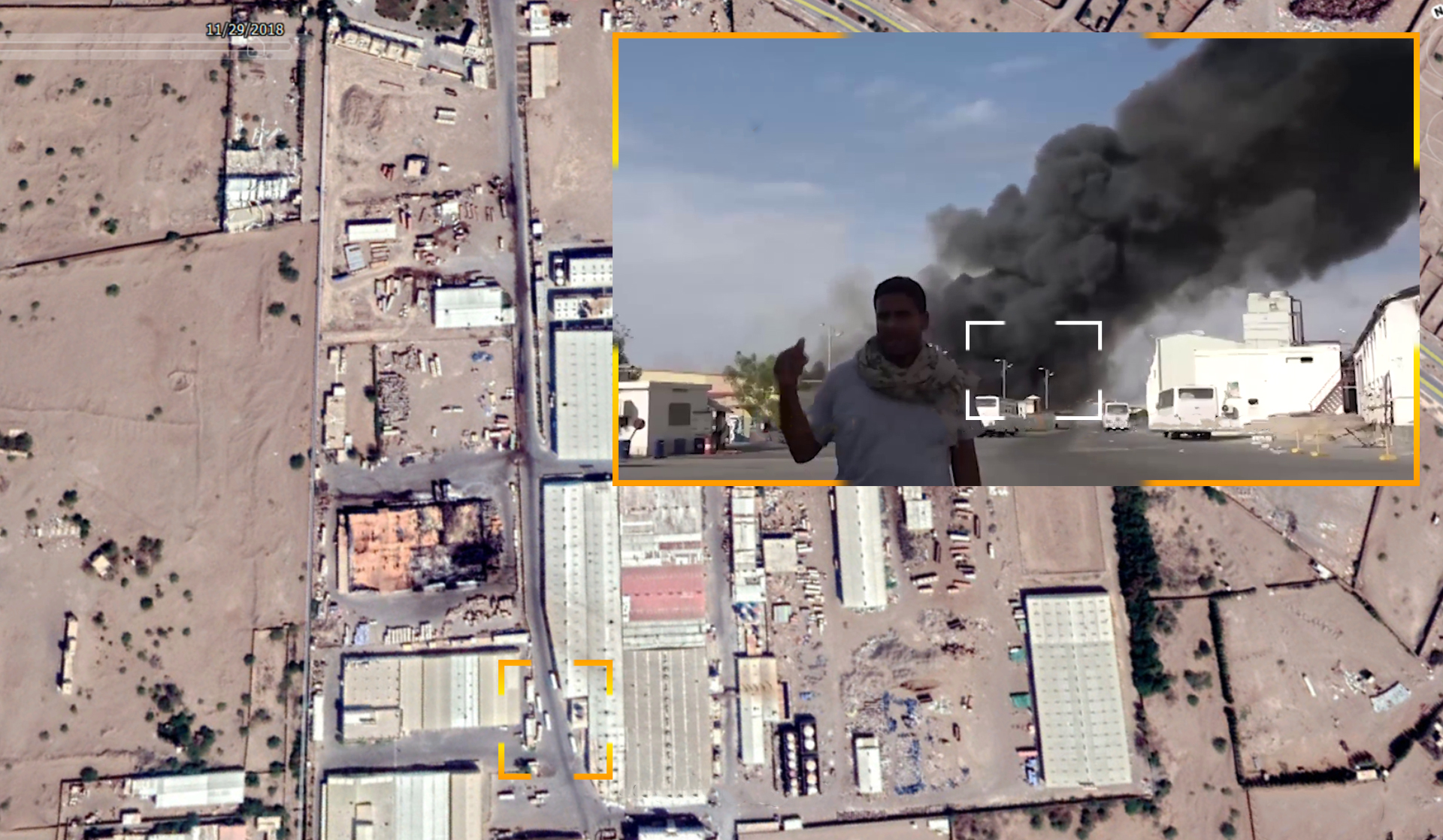 Footage from the Yemen Today Channel video and a satellite image from Google Earth.

In the first week of the Saudi-led coalition’s intervention in Yemen, the Ikhwan Thabit Complex was subjected to several airstrikes. At 23:00, before midnight on March 31, 2015, one of the complex’s factories was attacked by several airstrikes resulting in casualties of more than 40 workers.

Using visual content published after the attack by the ”Yamanioun” news site and the report from “Yemen Satellite TV” in addition to satellite images from Google Earth, Yemeni Archive was able to determine that the targeted factory was located at the coordinates 14.780936, 42.999582.

Yemeni Archive analyzed these previous attacks on the complex based on the images and videos available through open source content that can be analyzed to corroborate reports of the attacks and their locations. 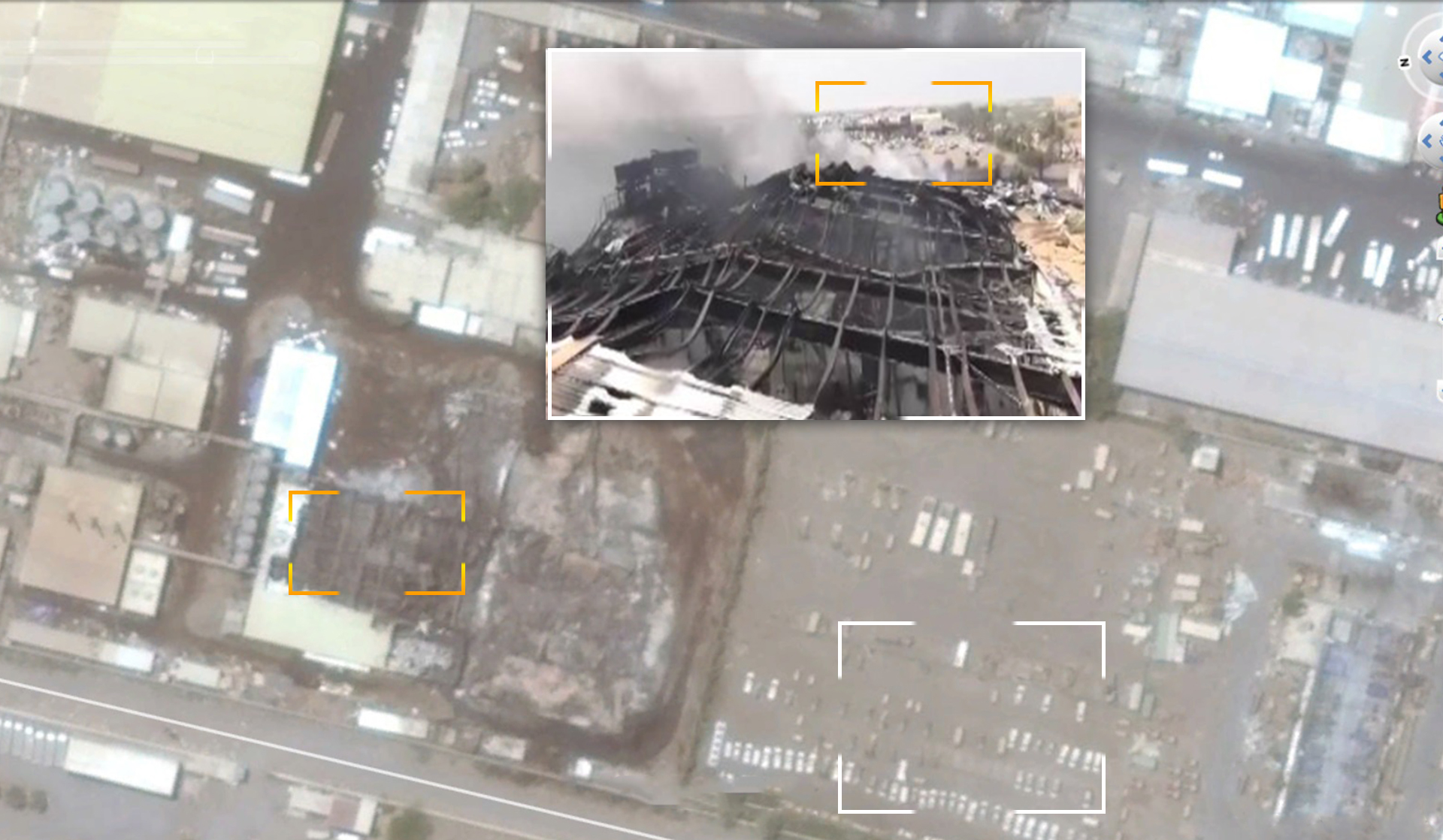 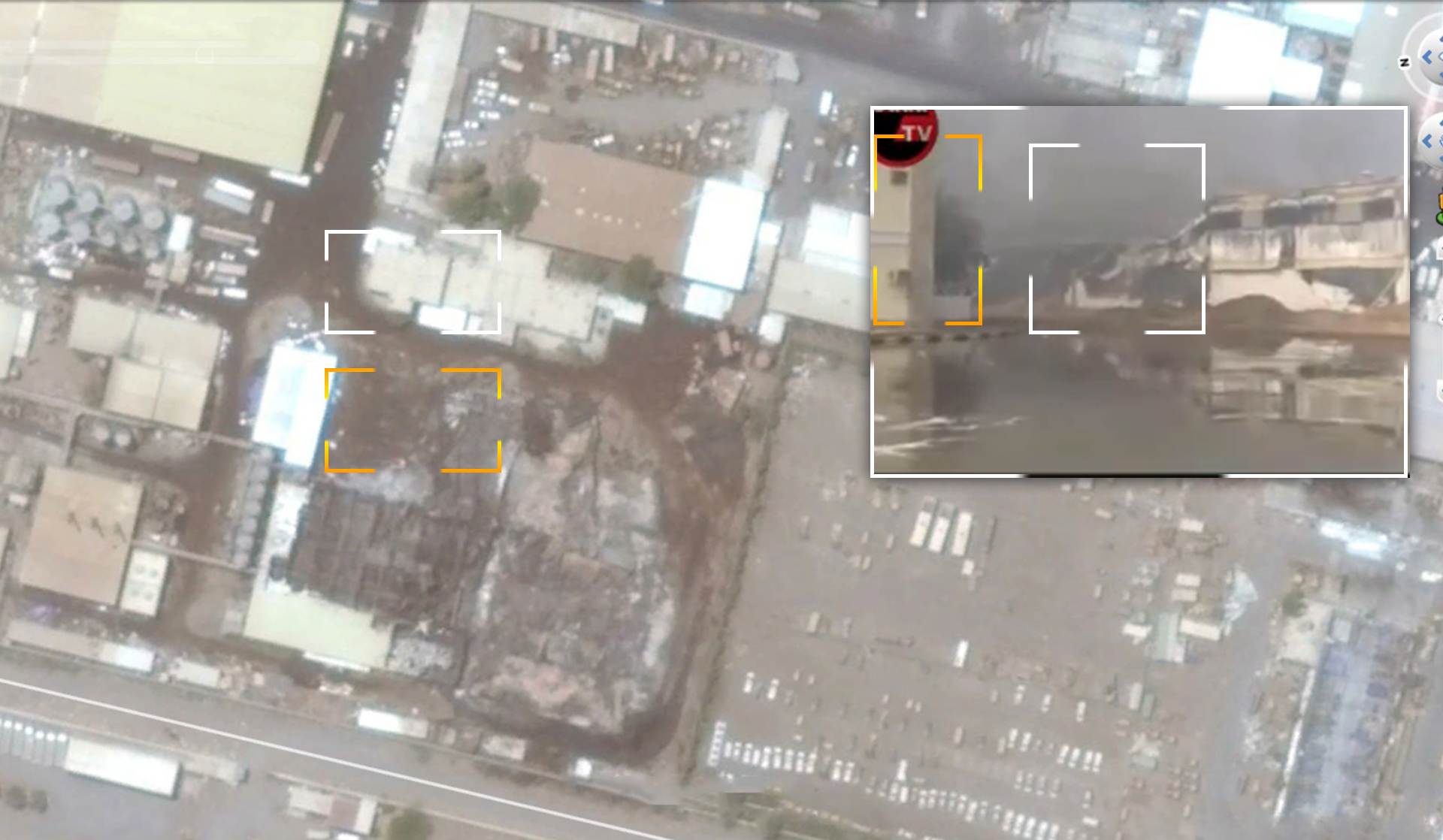 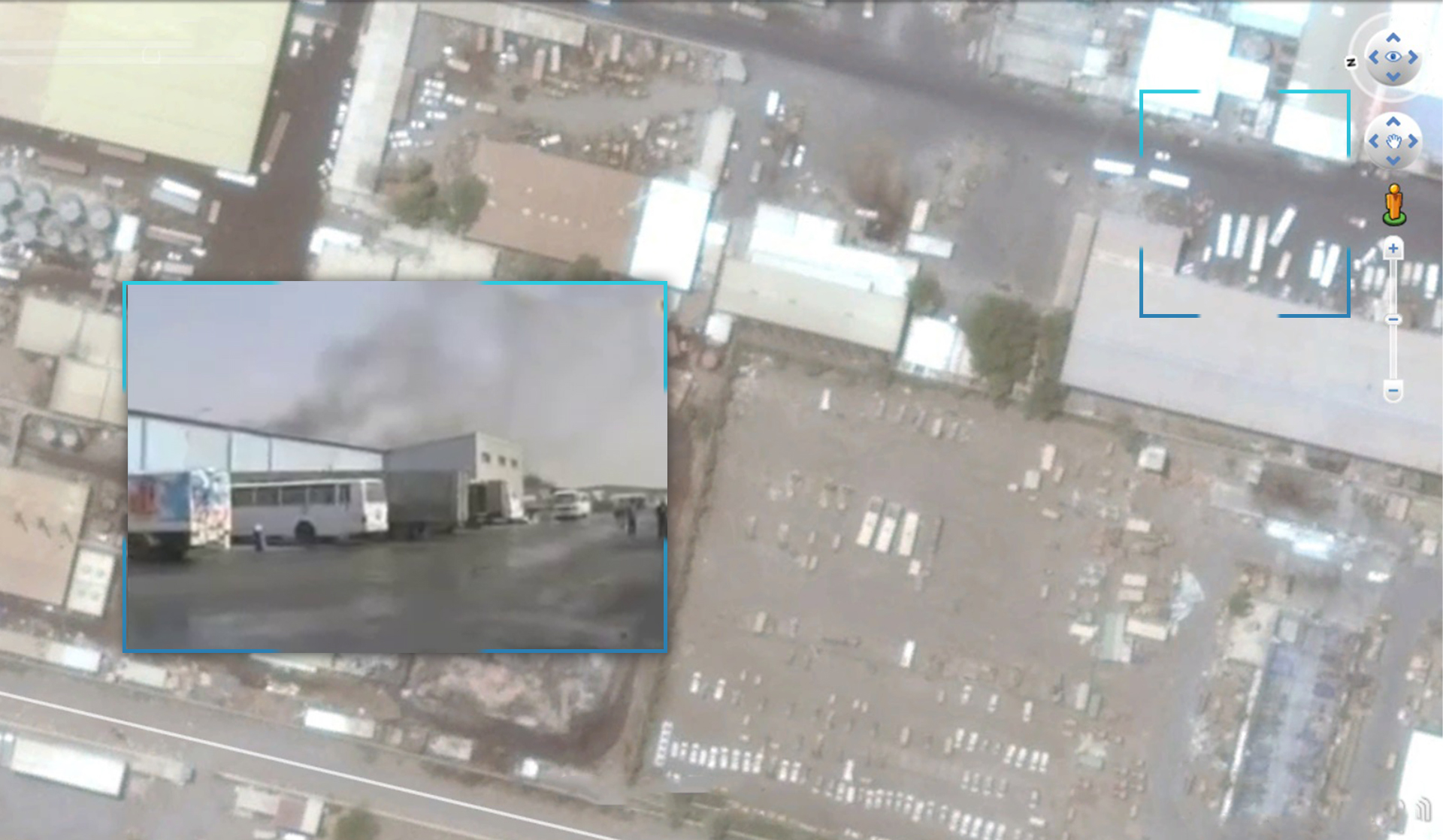 During the war in Yemen, seven warehouses were completely burnt. One warehouse, used for cardboard production, was partially damaged. The approximate area of destruction is estimated at 2,600 square meters, including the cardboard blocks stacked next to the complex’s outer fence wall.

Archived satellite images from Google Earth, of the complex before and after the attacks, show the damage to each warehouse separately, as well as the partial damage to the rest of the factory’s facilities. 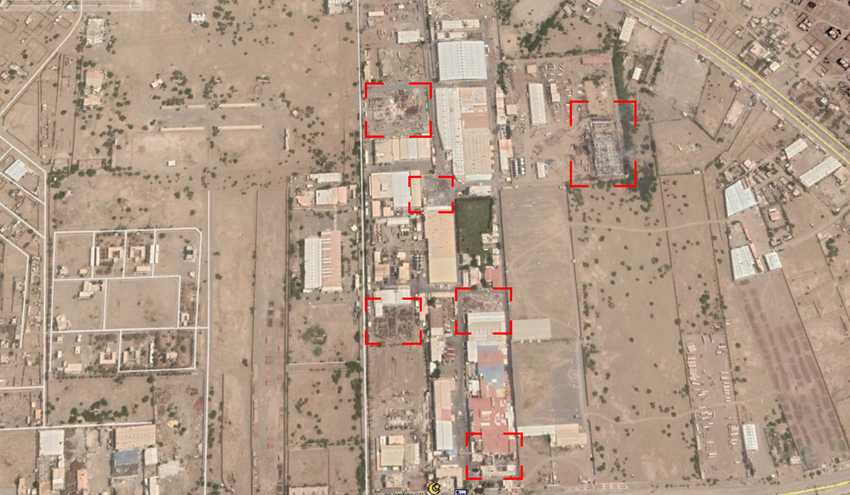 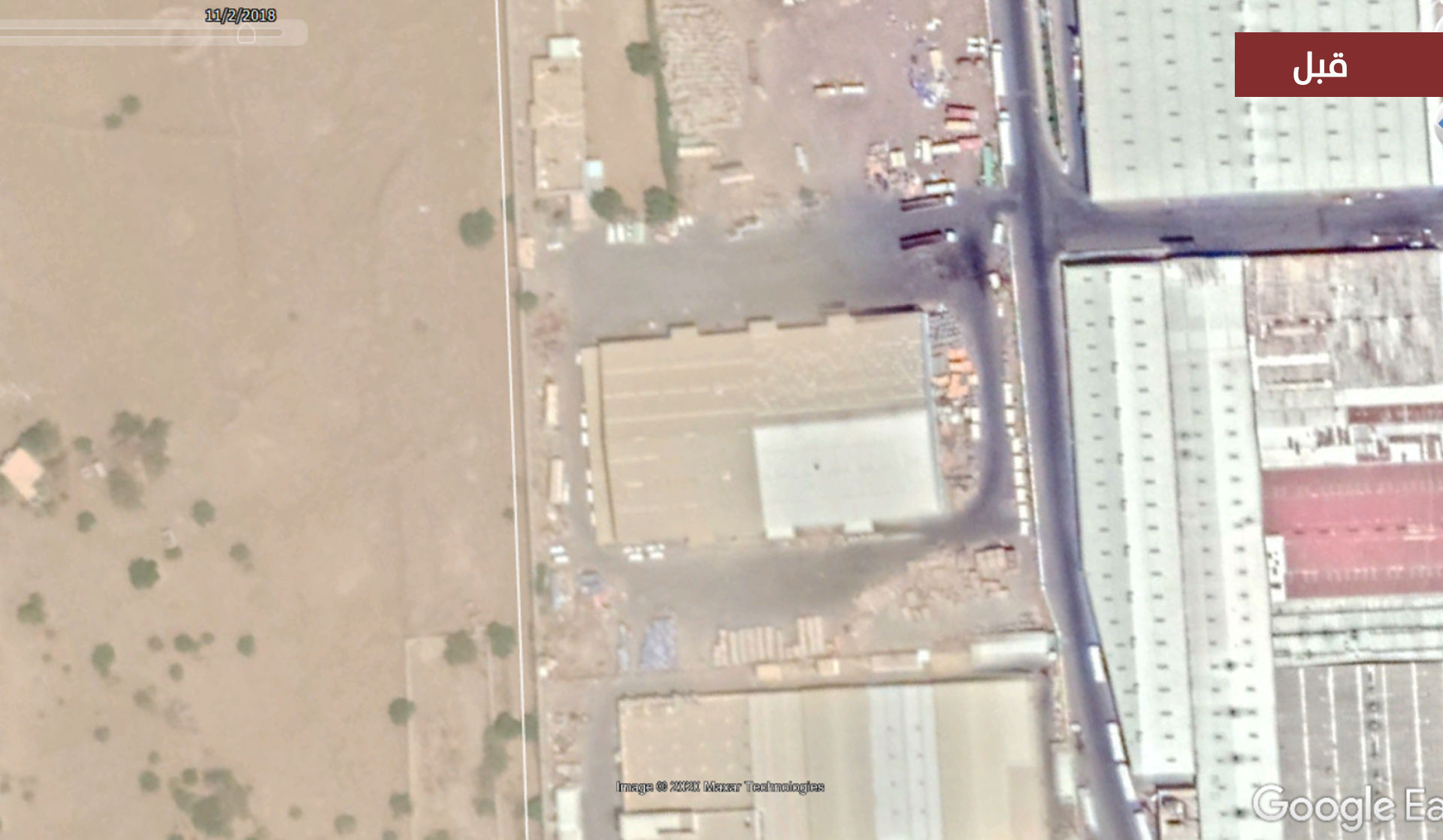 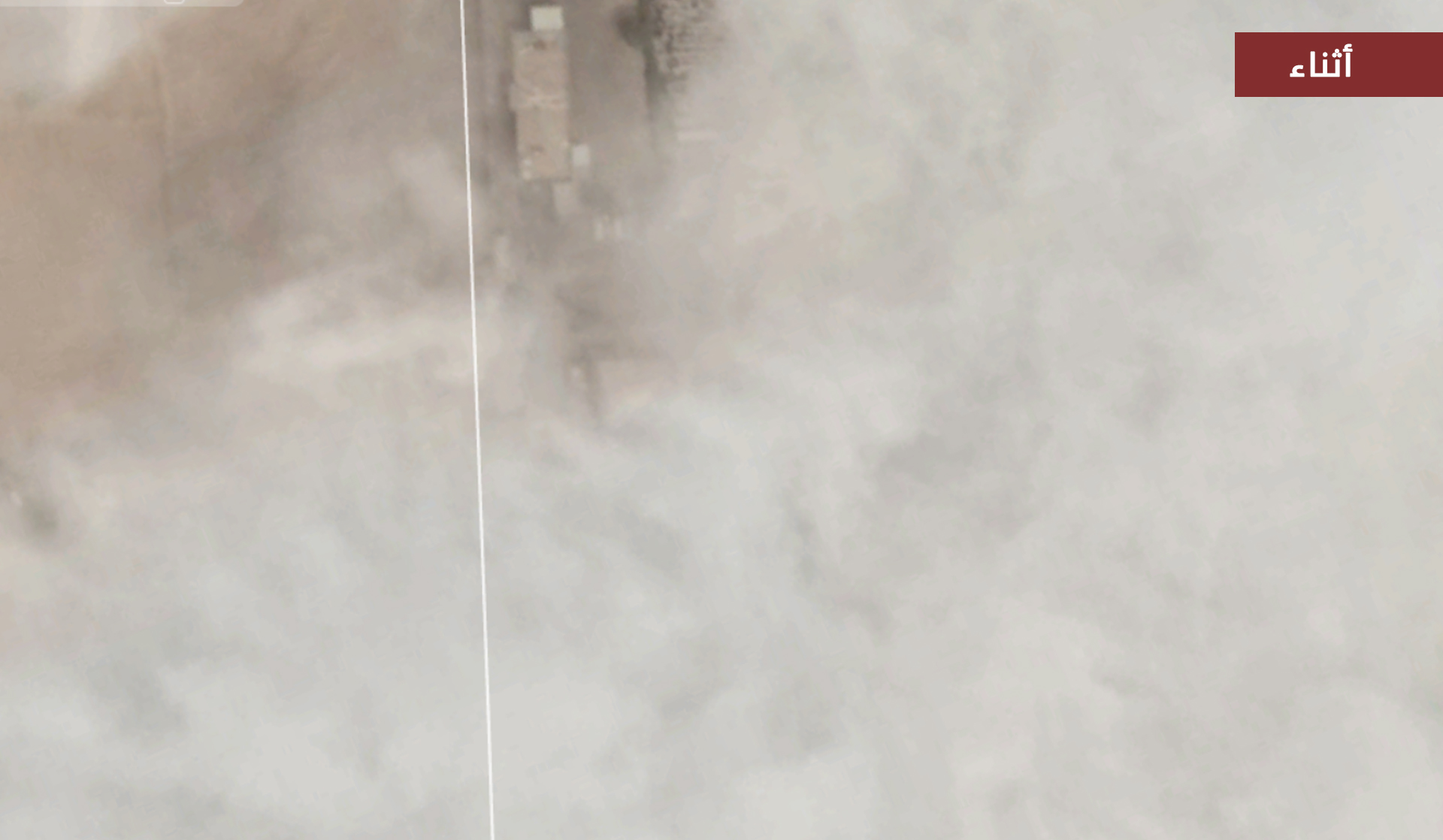 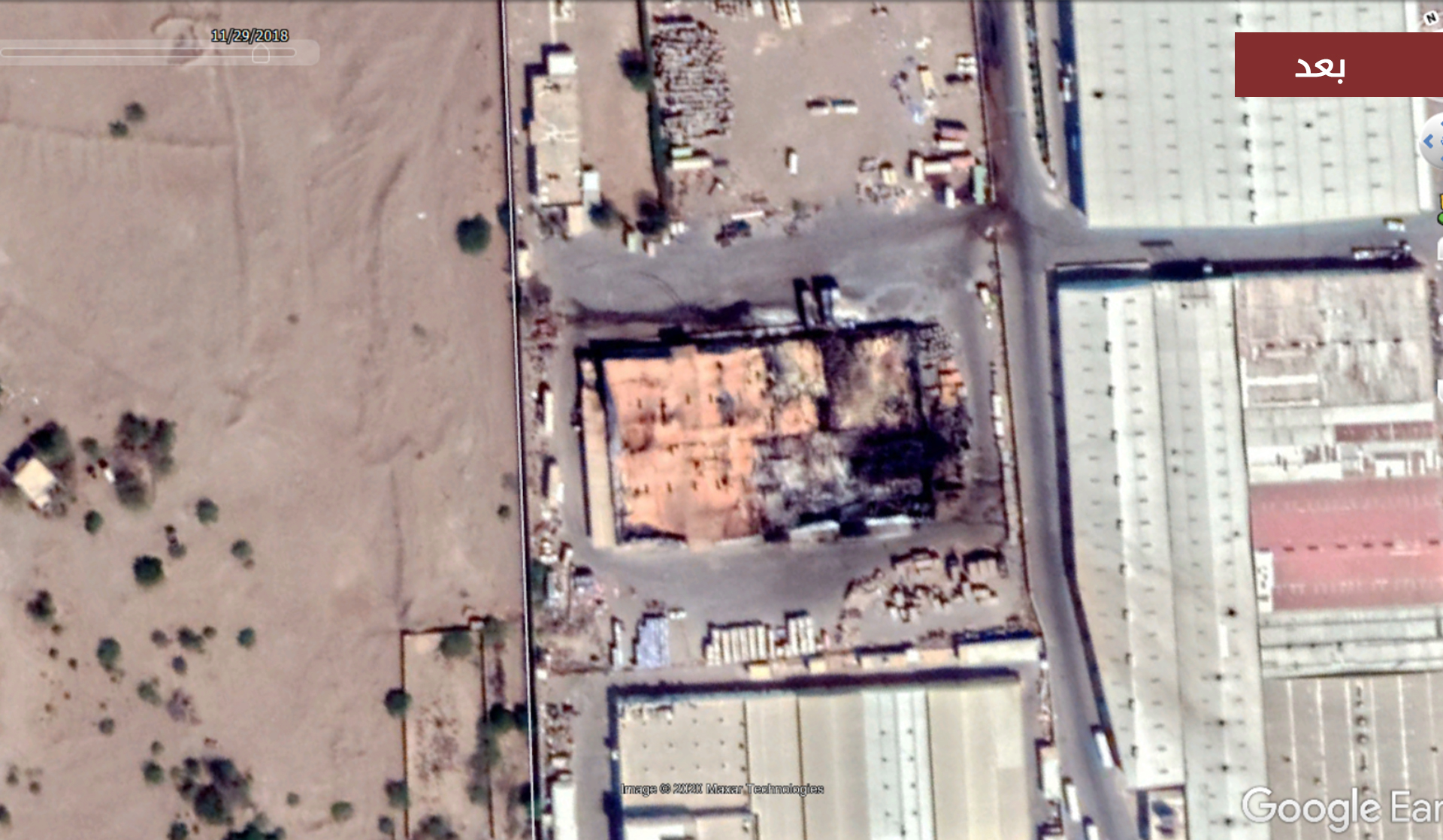 Weapons used in the attack

In photos shared by “Basim Al-Janani” on Facebook, two pictures showing remnants of an ammunition that fell on a warehouse on December 3, 2020, match news reports stating that the attack was carried out using Katyusha missiles.

Days after the attack in March 2019, the “Alweyaat Al-Amaliqa Media Center” published a video near the cardboard box factory, showing remnants of a mortar fired by the Ansar Allah movement “Houthis.” During the filming of the video, another mortar fell meters away from the cameraman. This confirms the use of this type of weapon in the bombardment of the complex. 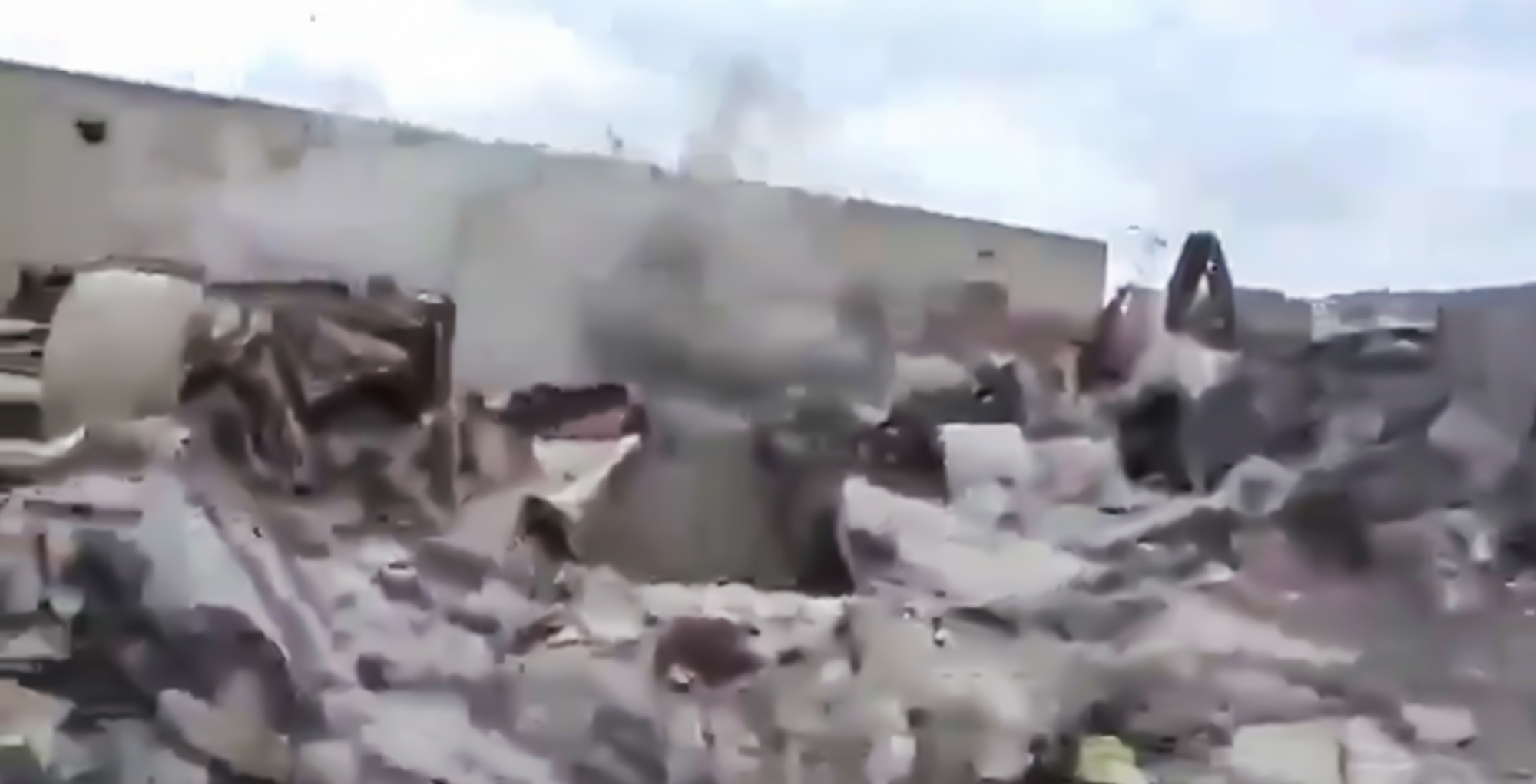 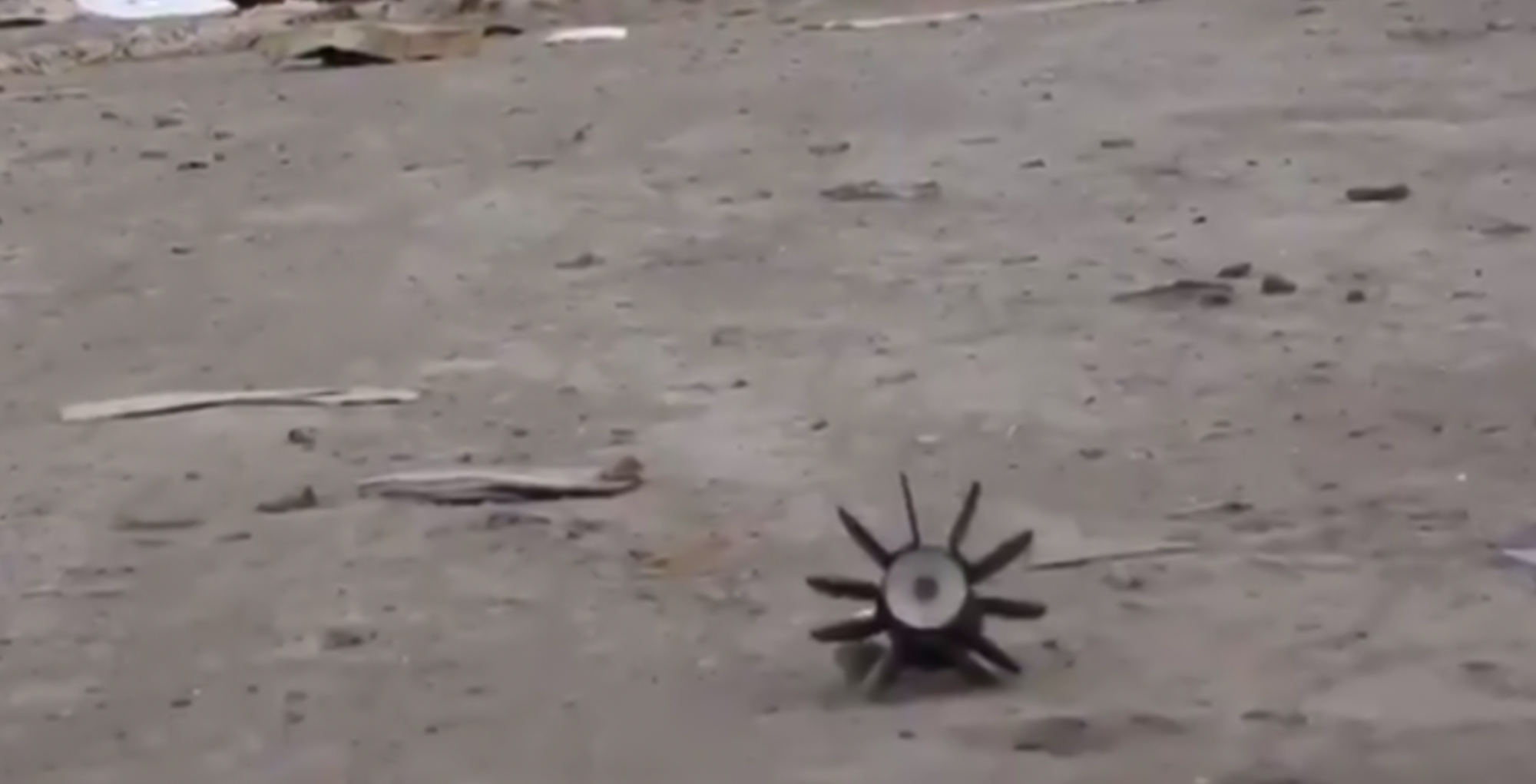 Statistics from local and international reports, including the victims of the December 3, 2020 attack, indicate that attacks on the complex killed 102 people and injured 60 others in total. The majority of those killed and injured were workers. 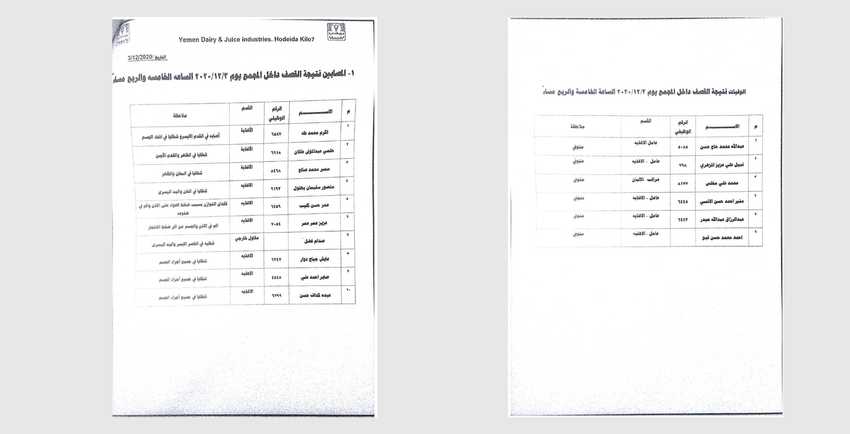 Documents released by the local source “Musab Afif” on twitter, mentioning the number of victims of the attack on December 3, 2020.

After collecting and analyzing images and visual evidence that were published on social media and news networks, Yemeni Archive verified that the Ikhwan Thabit Complex was targeted more than 53 times since the beginning of the war (2015) in Yemen. The attacks killed 102 people and injured 60 others, most of them workers. This is in addition to the material losses of 7 warehouses burning down (factories - raw materials).

The bombing has doubled during the last two years (2018-2020), after military clashes near the vicinity of the industrial complex between the “Joint Forces on the West Coast” of the Yemeni government on one side and the Ansar Allah movement “Houthis” on the other.These attacks also come after the use of the complex as the headquarters of the The Redeployment Coordination Committee (RCC), following the Stockholm Agreement which called for an immediate ceasefire. The ceasefire was not followed. 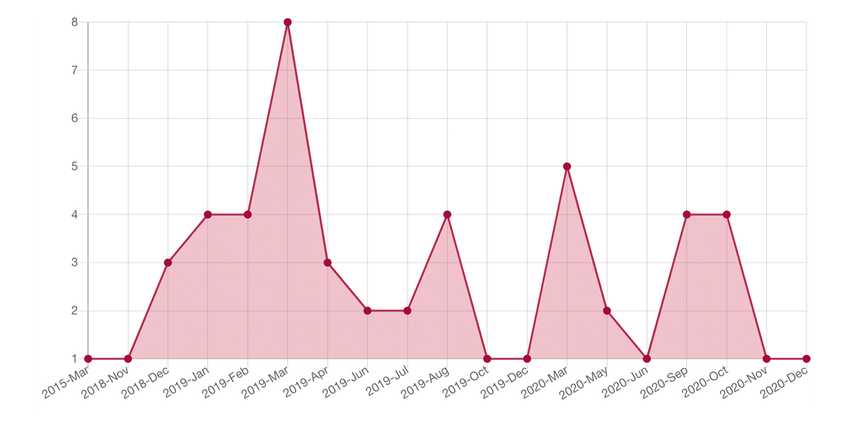 An investigation by the journalist Abdullah Al-Mamre | Yemeni Archive