The five-year-old girl Nisma Saber Amin was killed with her father and brother, in addition to other civilians, after midnight on Sunday, February 28, 2021. Nisma and her family were killed by artillery shelling. Two mortar shells of the three fired on her neighborhood, hit a car parked in the courtyard of Nisma’s family home, and the sidewalk outside her home. The third mortar shell hit a nearby building.

News websites and social media users circulated the news of shelling a civilian house and building in the Al Rabsa neighborhood south of Al Hodeidah. The two sides of the conflict blamed each other for the attack. The Houthi group “Ansar Allah” accused the Saudi-led Coalition of targeting the area by a drone strike. At the same time, the Coalition forces accused Ansar Allah of shelling the neighborhood with mortar shells.

About the incident and its timing:

After midnight on Sunday, February 28, 2021, social media users and news websites affiliated with Ansar Allah circulated news of drone strikes that targeted a house in Al Rabsa neighborhood killing five civilians, including a child, and injuring three others.

Conflicting reports about the nature of the attack emerged after websites affiliated with the Saudi-led Coalition and the Joint Forces on the Western Coast published reports of mortar shells fired by Ansar Allah, hitting a house in Al Rabsa neighborhood. According to reports, armed men from Ansar Allah arrived at the impact site, collected remnants of the munition, and took victims to a military hospital in the city.

In a Facebook post, Abu Shahid Al Ghanim, who identifies himself as the Media Director of the Al Hawk district, alerted that planes were flying above Al Rabsa, while also mentioning a nearby bombing that killed and injured civilians. In response to Al Ghanim’s post, local sources in Al Hodeidah city commented that the city was hit by mortar and artillery shells.

A screenshot of Al Arabiya’s tweet on the attack.

Time of the attack:

Muhammad Odeen, one of the locals, was the first to report the incident in a Tweet at 1:49 am, on Sunday, February 28. After that, the news was circulated, most of which shared Odeen’s report, Determining the exact timing of the shelling based on the timing of the Tweet is not possible.

The analysis of the visual content, and tracking the UN Committee in the documented scenes of the area that were published by Aden channel, Al Yemen channel, the Ansar Allah website, Al Masirah channel, and September 21 channel reveal that two locations were shelled.

Comparing the distinctive features and visual evidence in the footage broadcast by Aden channel with satellite imagery from Google Earth, Yemeni Archive was able to identify the other location that was shelled in the attack -in addition to the house- at the coordinates 14.777541, 42.969425. 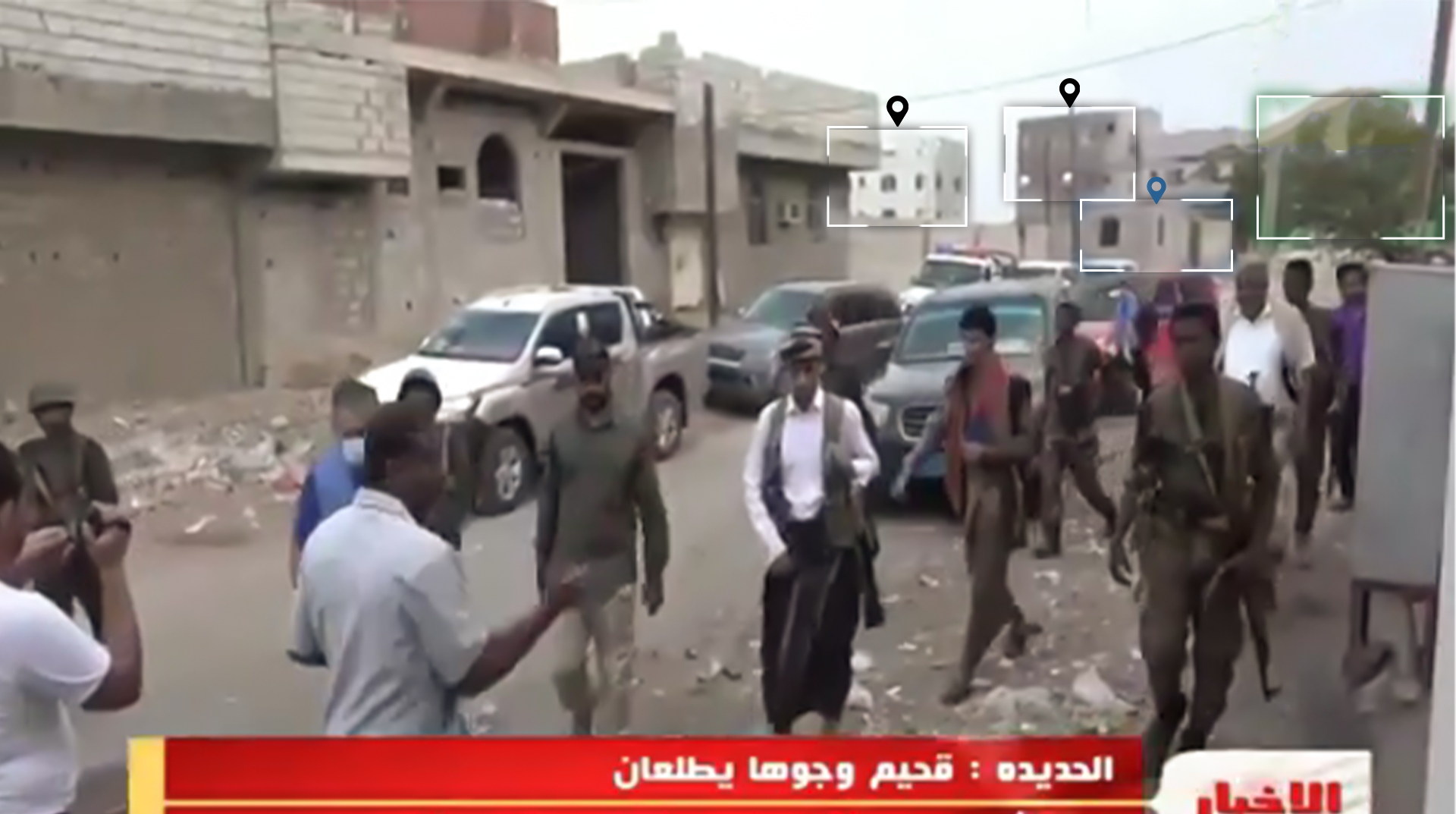 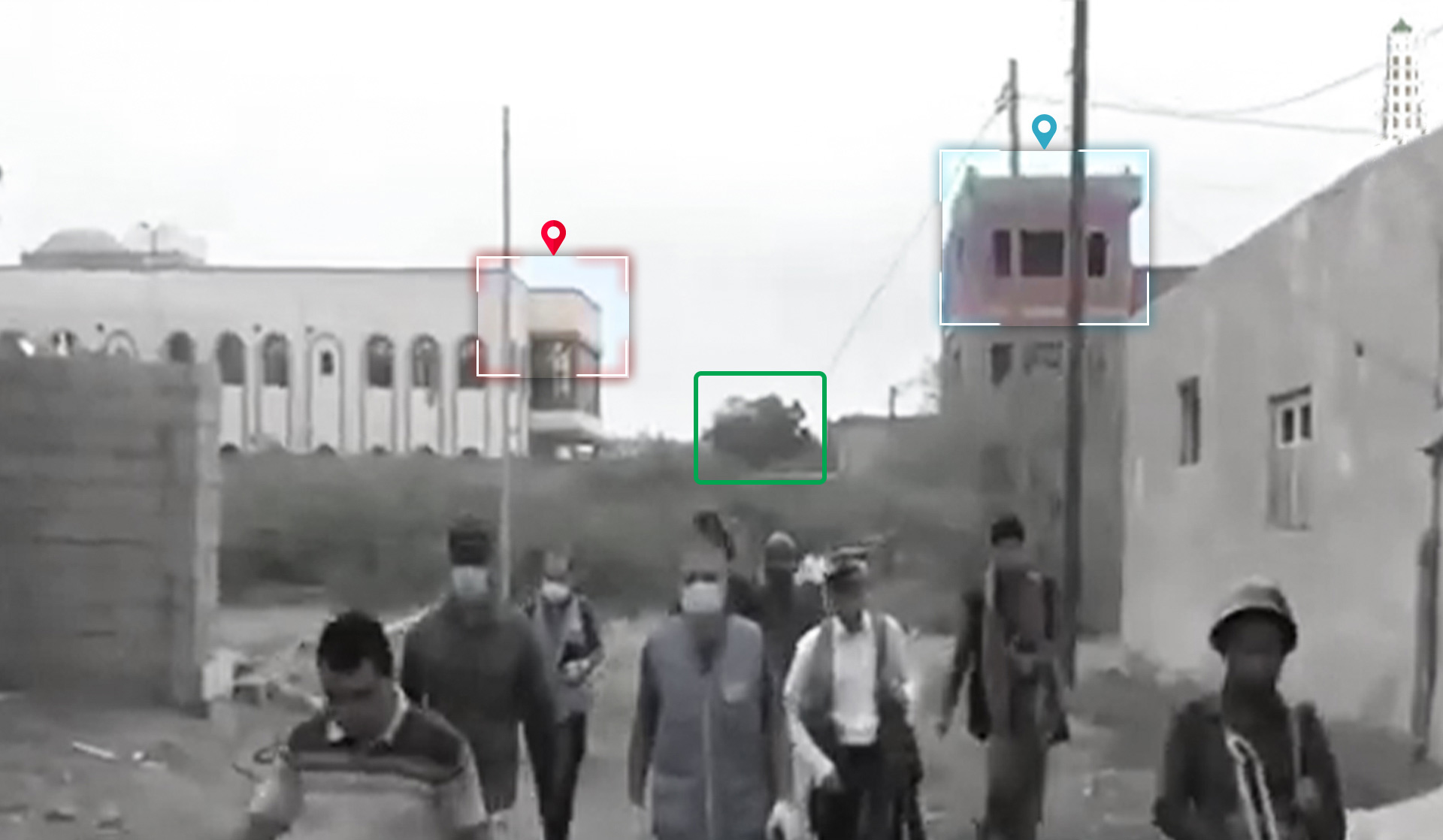 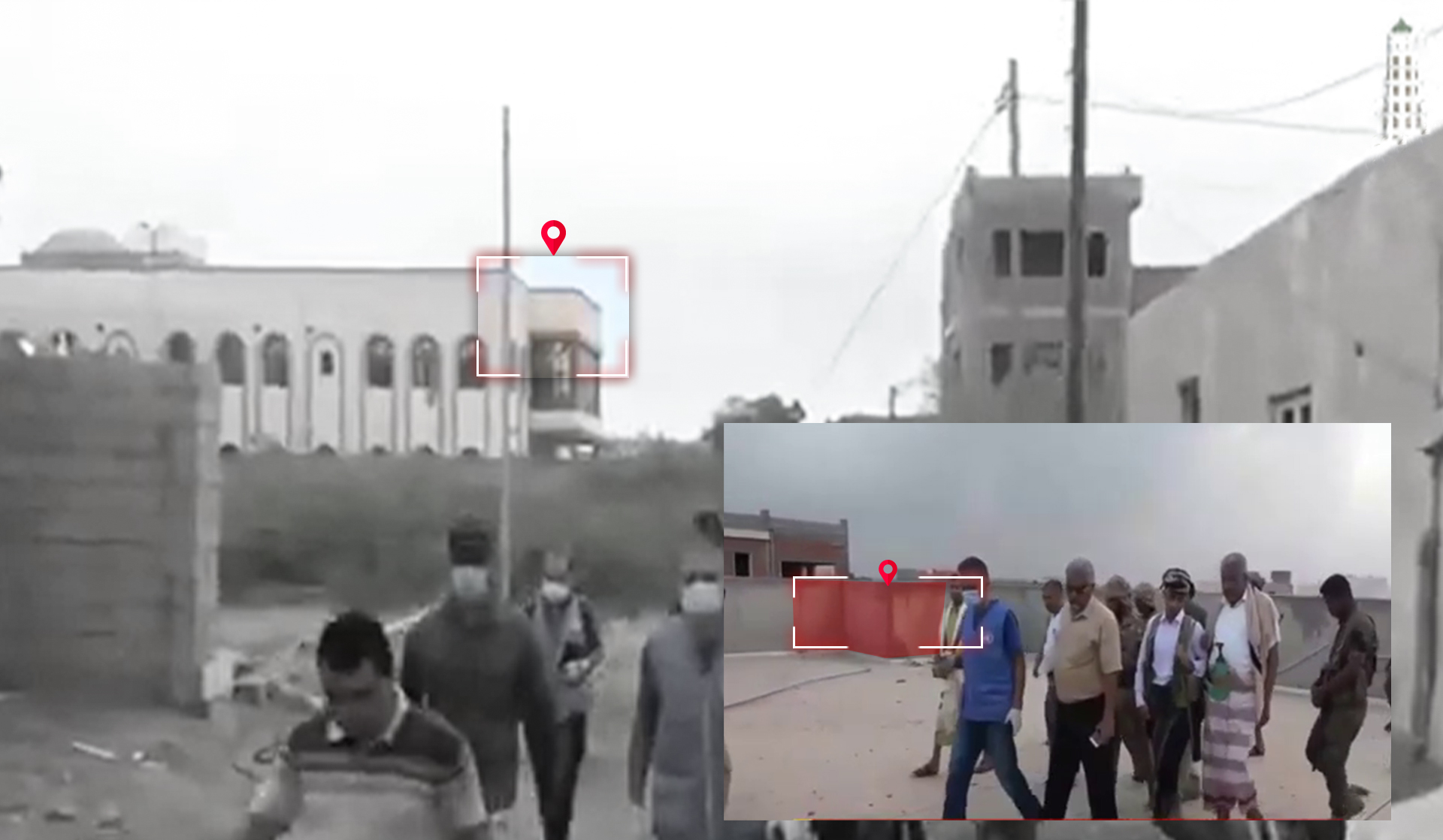 A screenshot from a video posted by Aden channel. 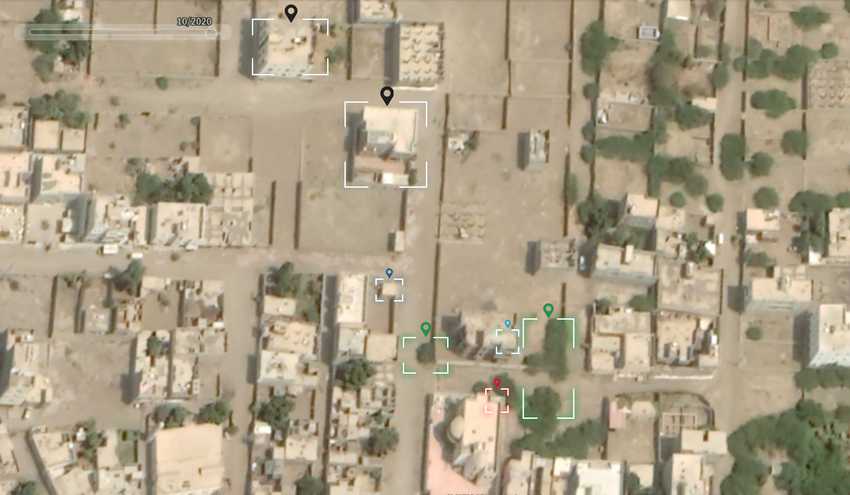 The video shows the UN Committee, after visiting the impact site, heading east on foot through a side road and entering the house hit in the attack. This indicates the close proximity of the two impact sites. 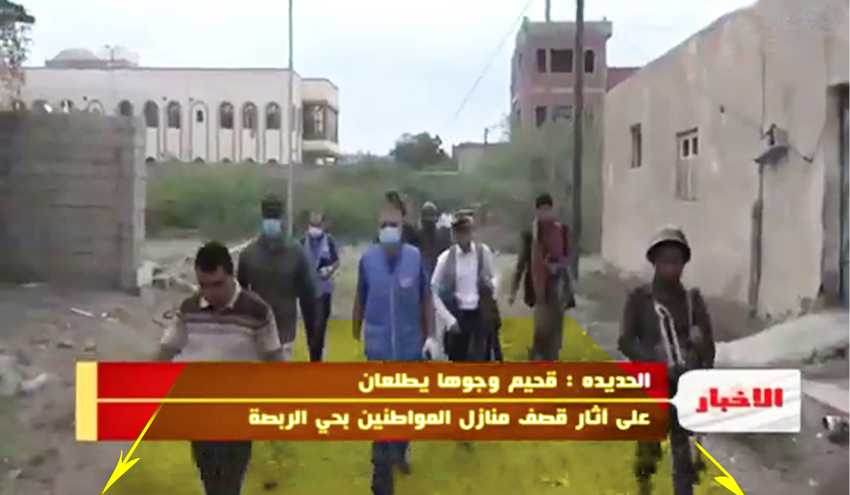 Screenshots from a video posted by Aden channel.

The documented scenes, at day and night, showed several visual evidence of the house’s structure, the surrounding landmarks, and the path of the committee’s entry to it, which made it easy to locate the house at the coordinates 14.777750, 42.970612, around 200 meters from the building that was visited first by the UN Committee. 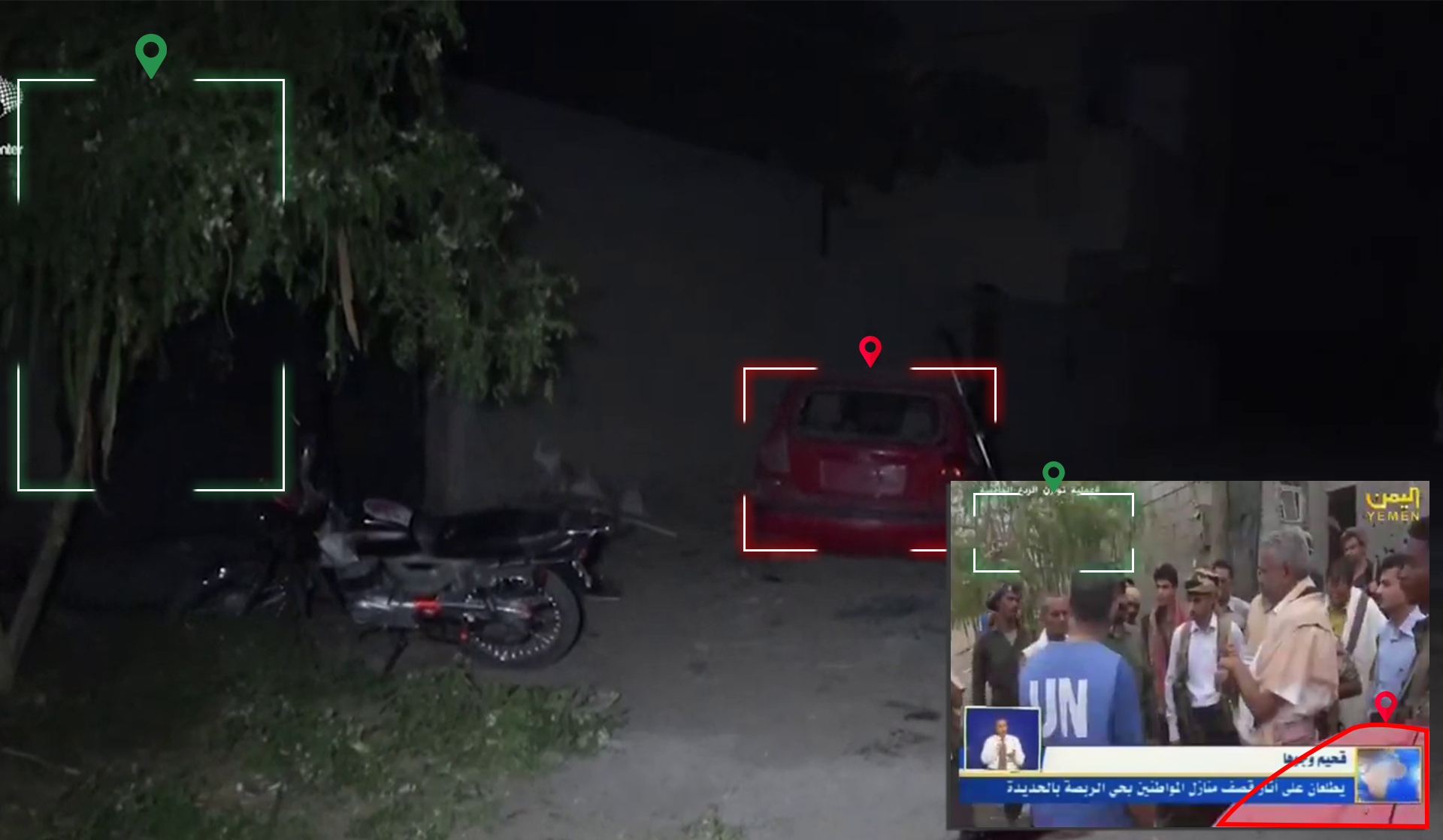 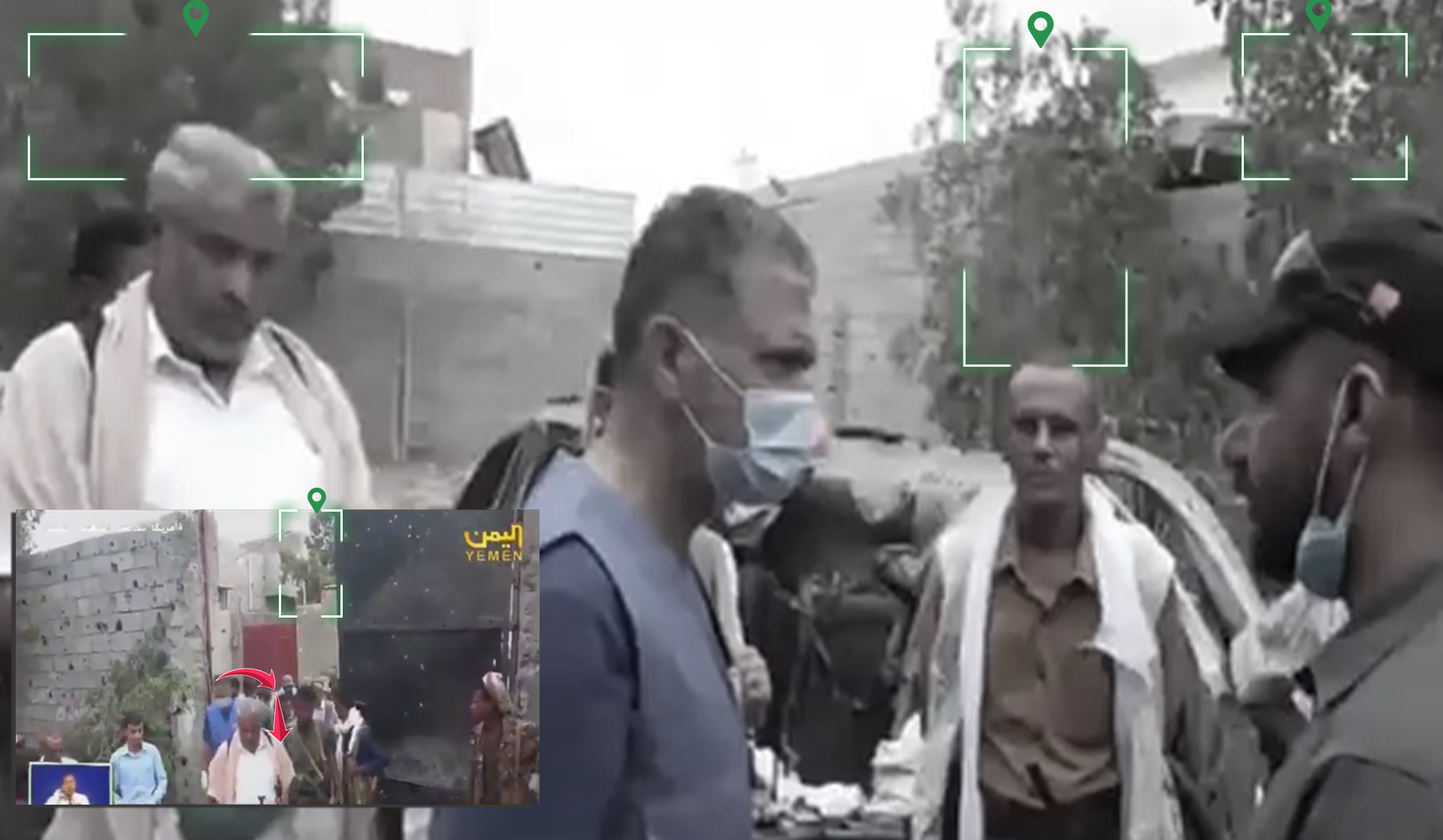 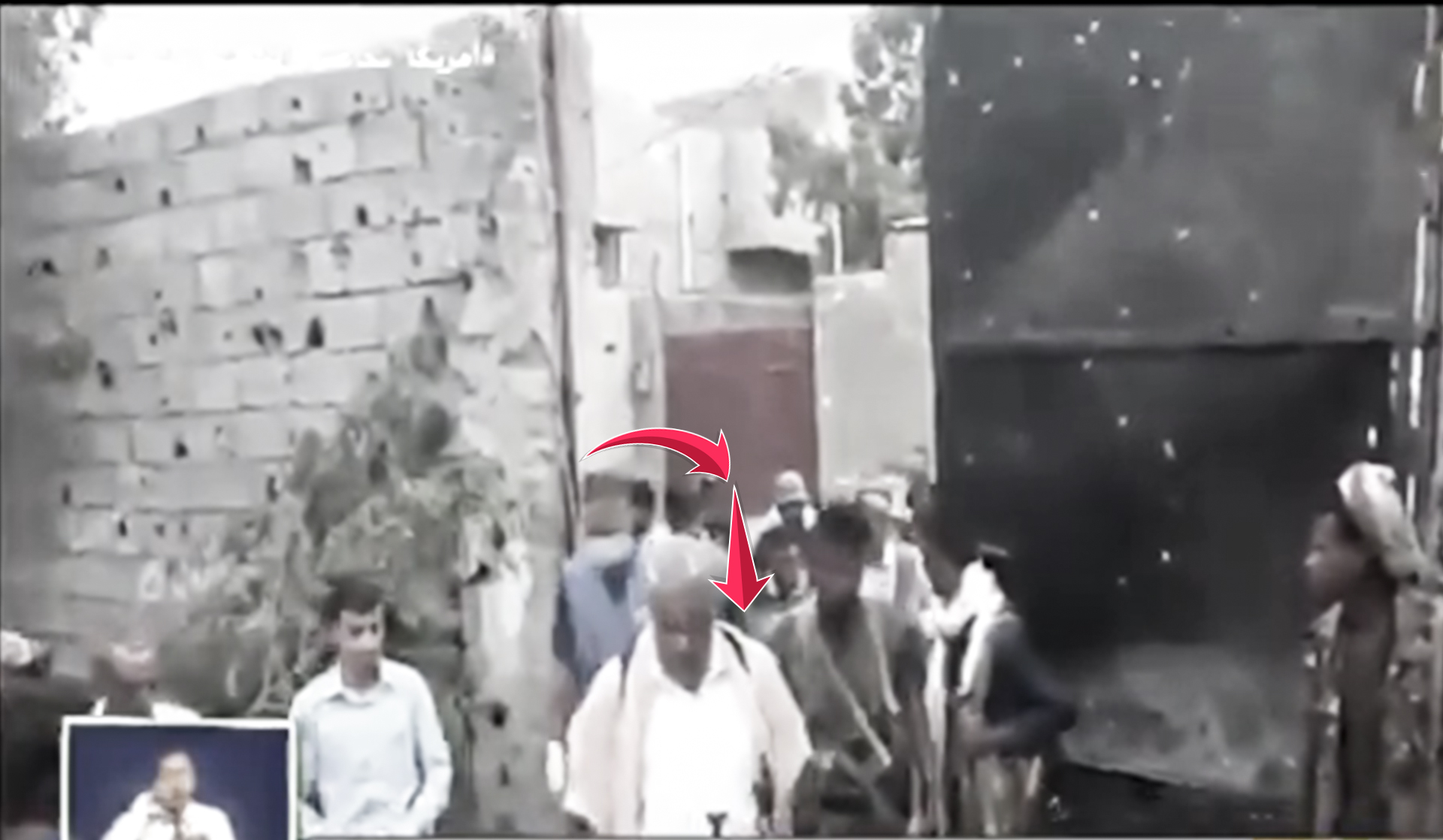 Screenshots from video reports by the Ansar Allah website and Al Yemen channel. 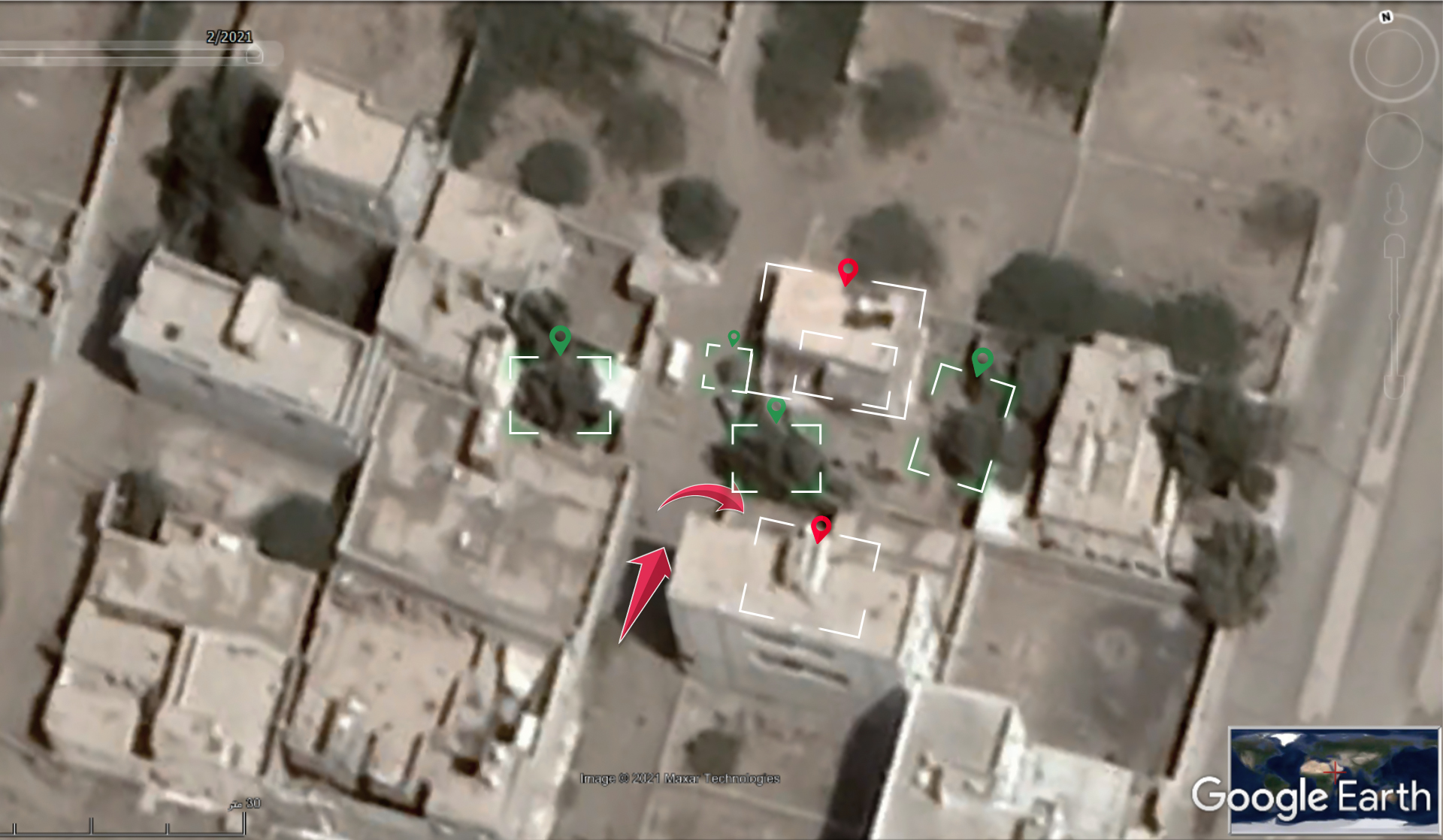 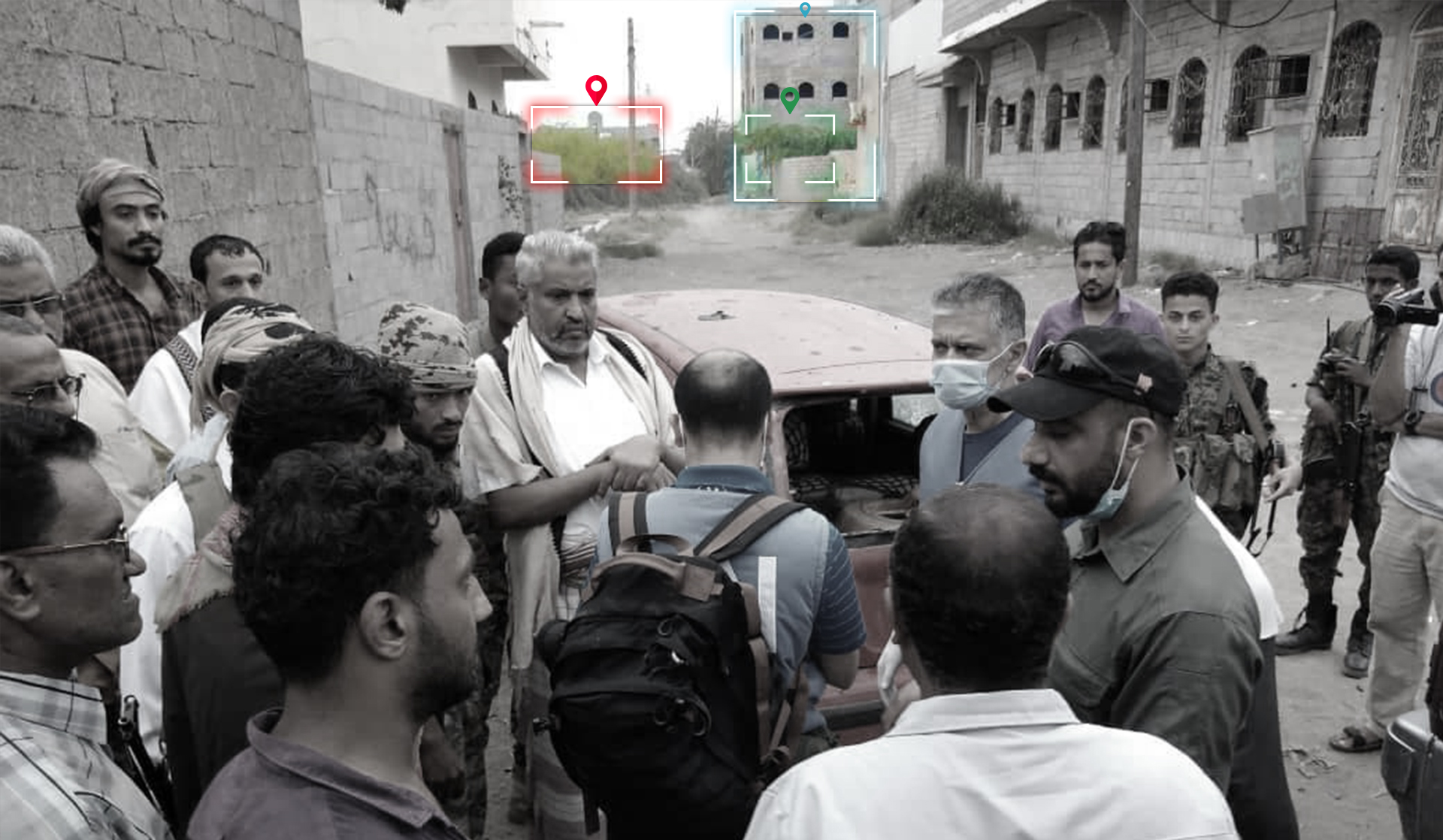 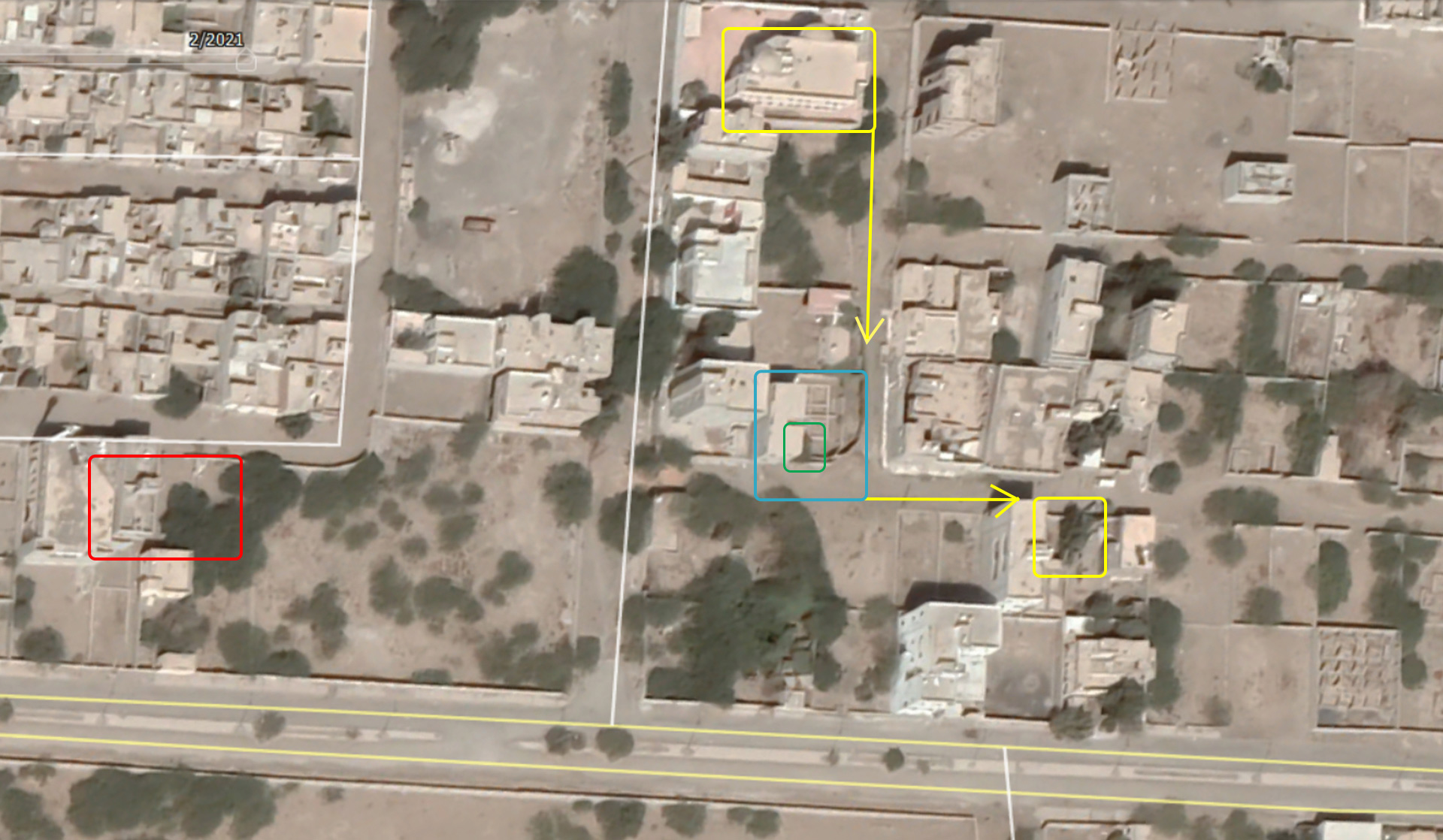 Videos and pictures posted by Qasim Al Baisi on Facebook and Al Yemen channel show a circle of damage by shrapnel around the impact site. This type of damage is usually caused by mortar shells. The use of mortar shells in the attack was also confirmed by a munition remnant that fell on the roof of a nearby building, shown in a video posted by the Aden channel. The remnant appears to be the tail-end fan of a shell that is covered in rubble. 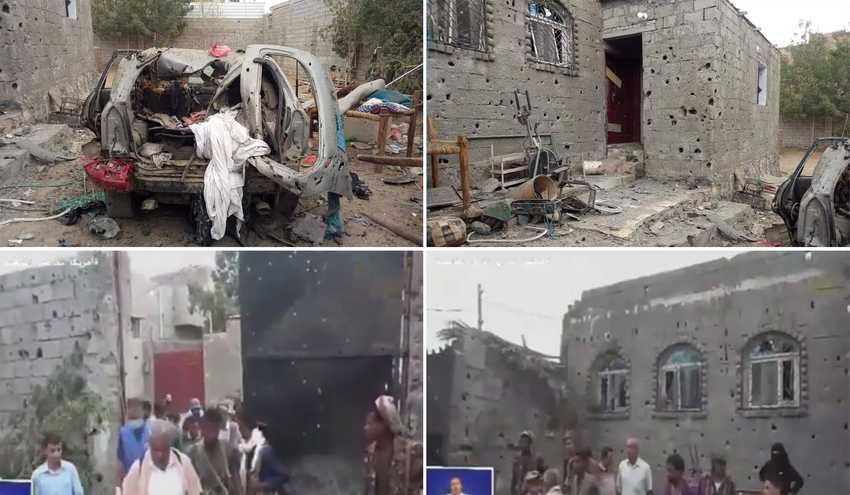 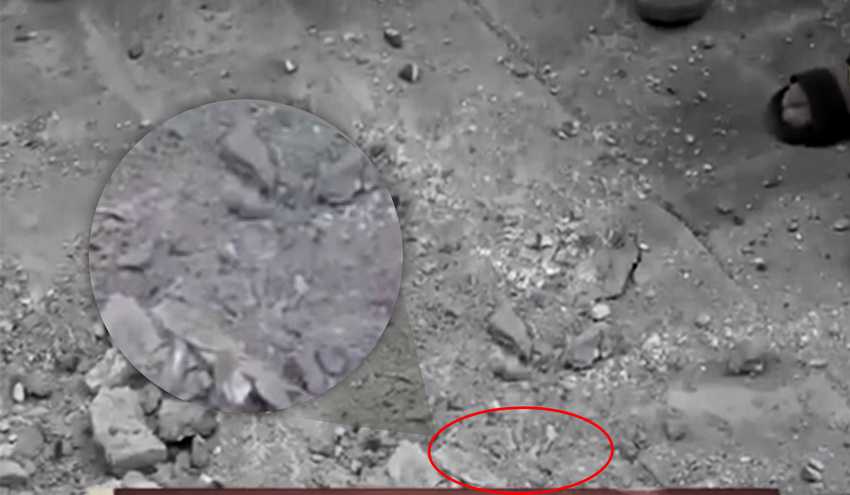 A screenshot from a video posted by the “Aden channel””

The sizes of the shrapnel holes throughout the house indicates the large size of the mortar used in the attack. It was likely 120 mm. The mortar remnants found on the roof of the nearby building, most likely from the first visited attack site, appear slightly smaller.

The process of determining who fired the mortars at the two identified impact sites required an extensive analysis of the visual evidence. This was conducted through two phases:

Determining the direction of the mortar’s path. The remnants of the mortar tail significantly help in identifying the munition’s direction.

In a video posted by Aden channel, people are heading towards the location where the shell fell. The video shows their eyes focused on that location. On the ground, lines separating concrete blocks appear next to the people in the video. 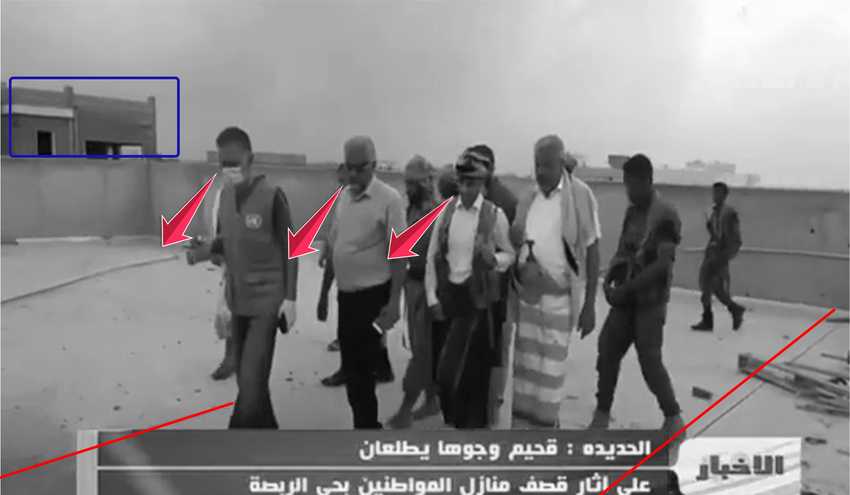 A screenshot from a video posted by “Aden channel””

In the following screenshots from the same Aden channel video and pictures posted by Abu Shahid Al Ghanim, we see at the feet of one of the armed men accompanying the committee, a horizontal line connecting the two vertical lines between the concrete, next to the gap left by the shell, which is the line east of the shell. 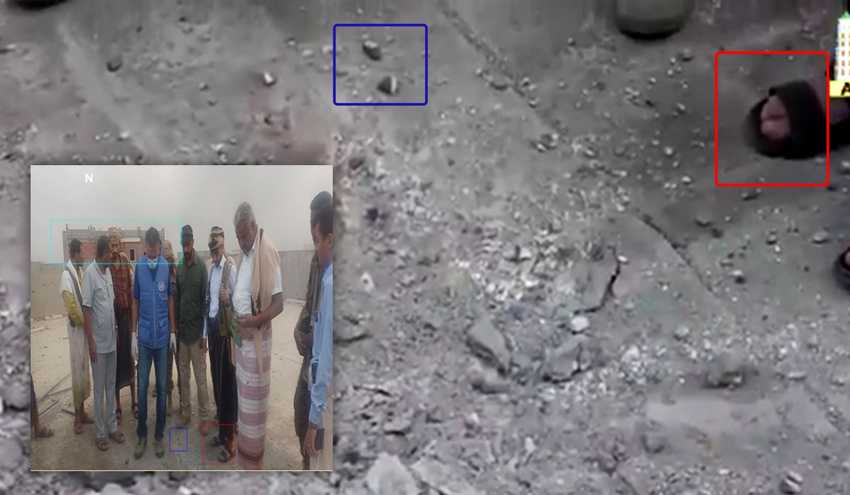 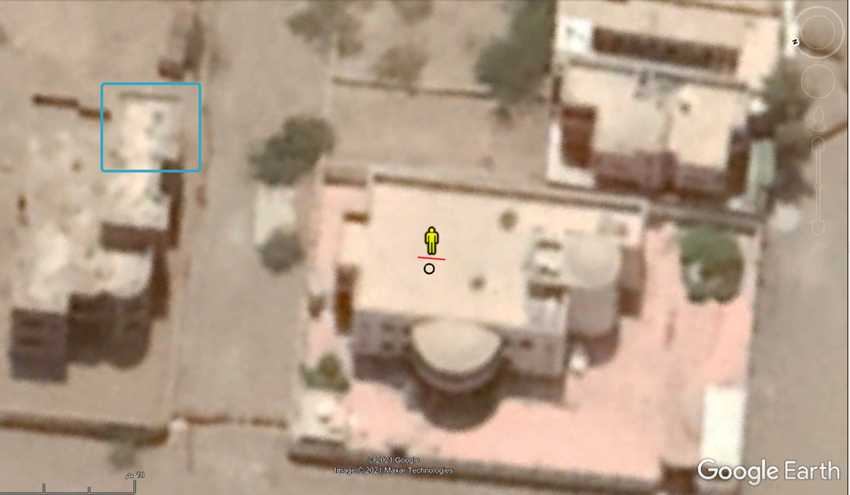 By zooming in on the mortar tail shown in the video, we see 6 blades out of the usual 10 bladed mortar shells. The other four blades are inside the concrete. This indicates that the mortar’s oncoming trajectory was from the southwest side of the city towards the University of Al Hodeidah and the Red Sea. 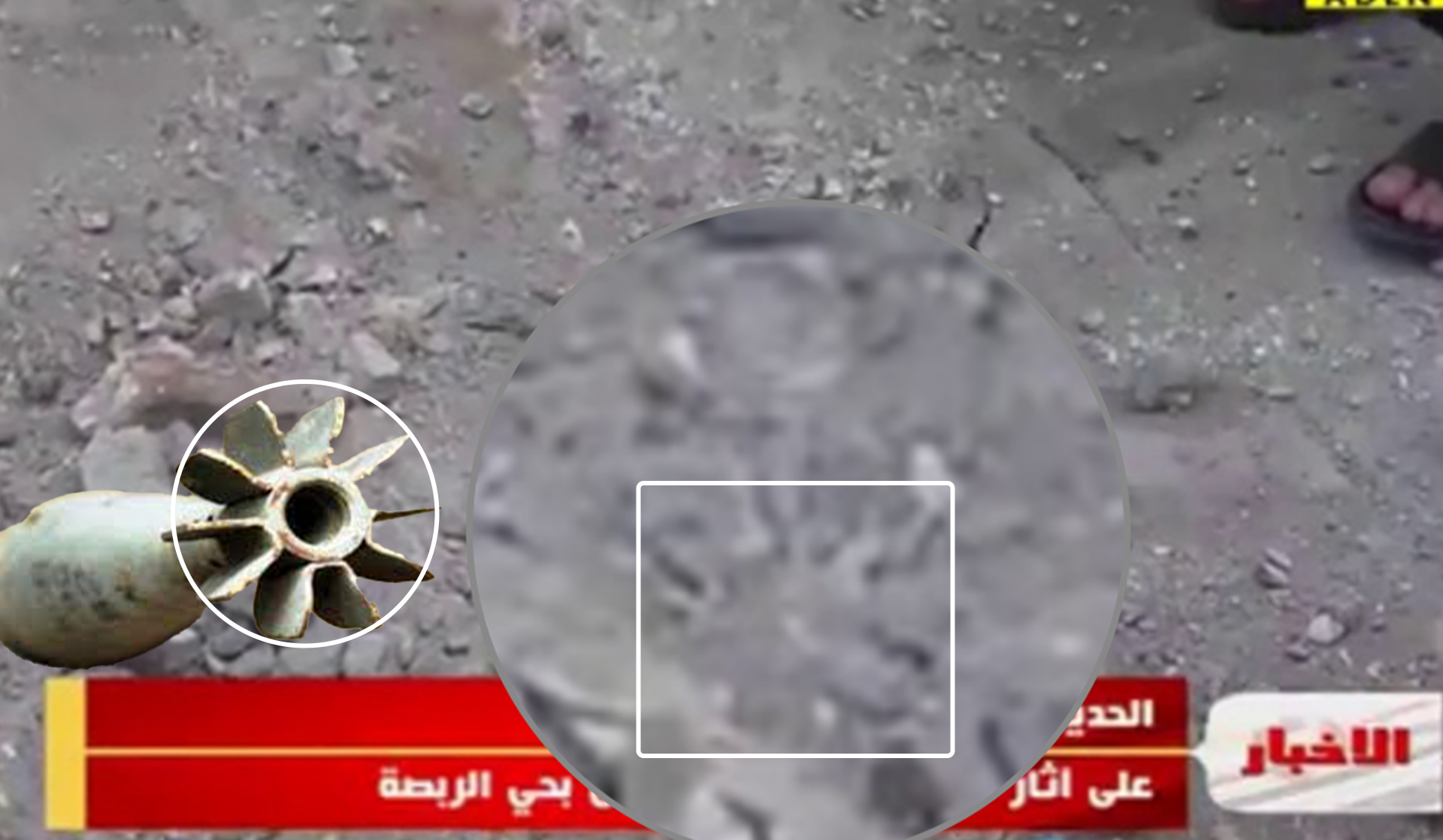 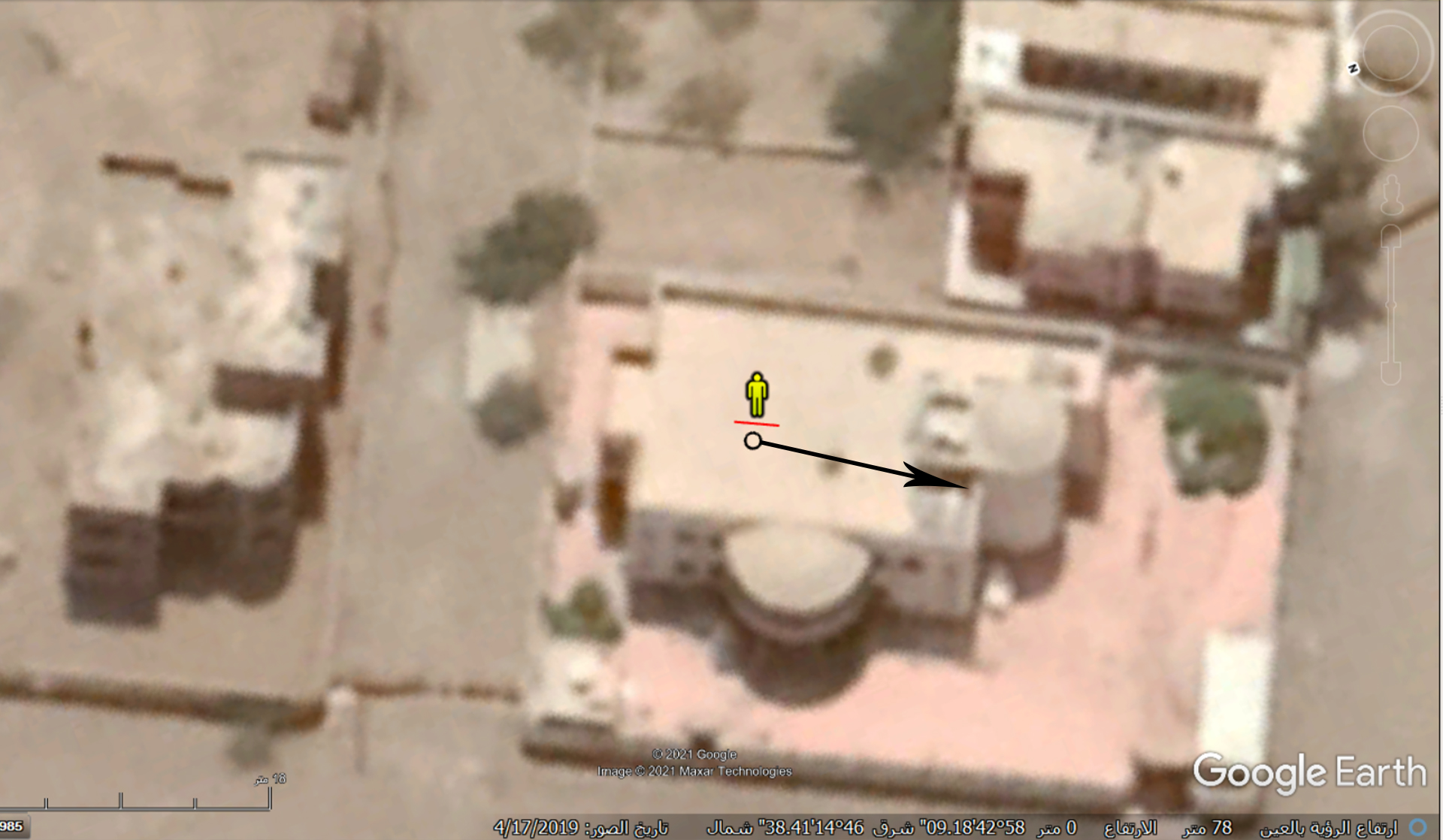 A screenshot from a video posted by Aden channel and satellite imagery from Google Earth. 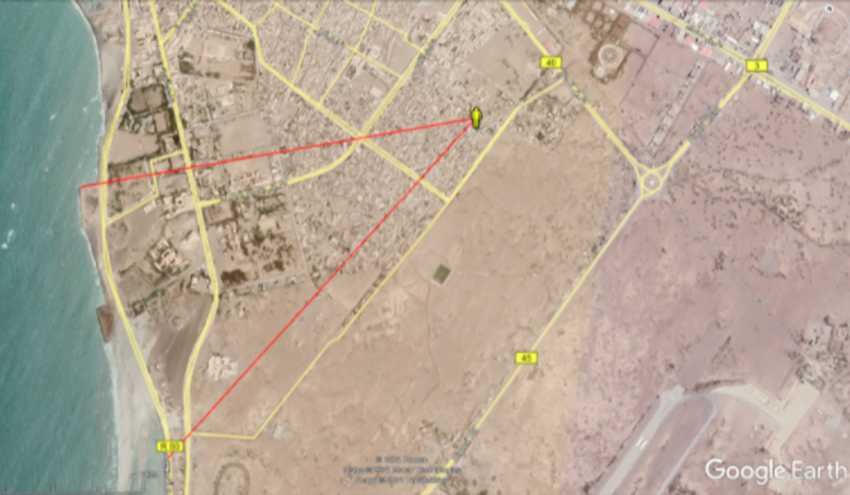 Documented scenes from the house show that the shell hit the rear top of the vehicle from the driver’s side, blasting its rear door. The vehicle’s roof turned inward suggesting that the munition came from the front of the vehicle, which was parked facing east. 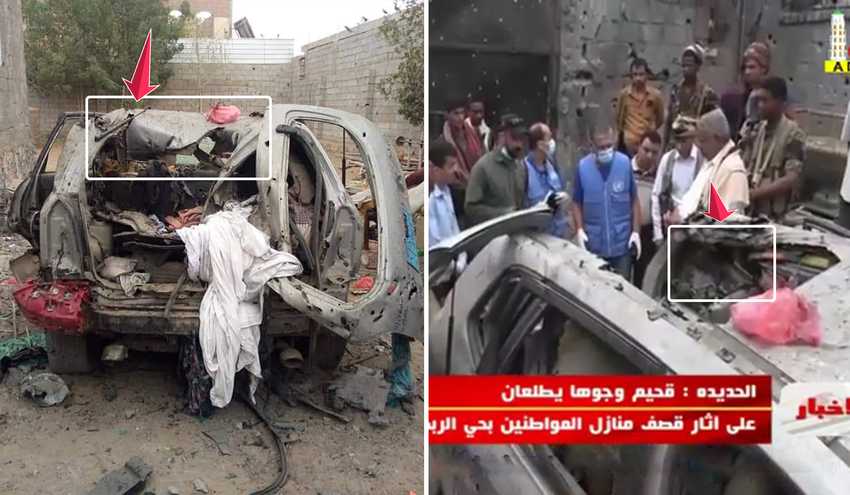 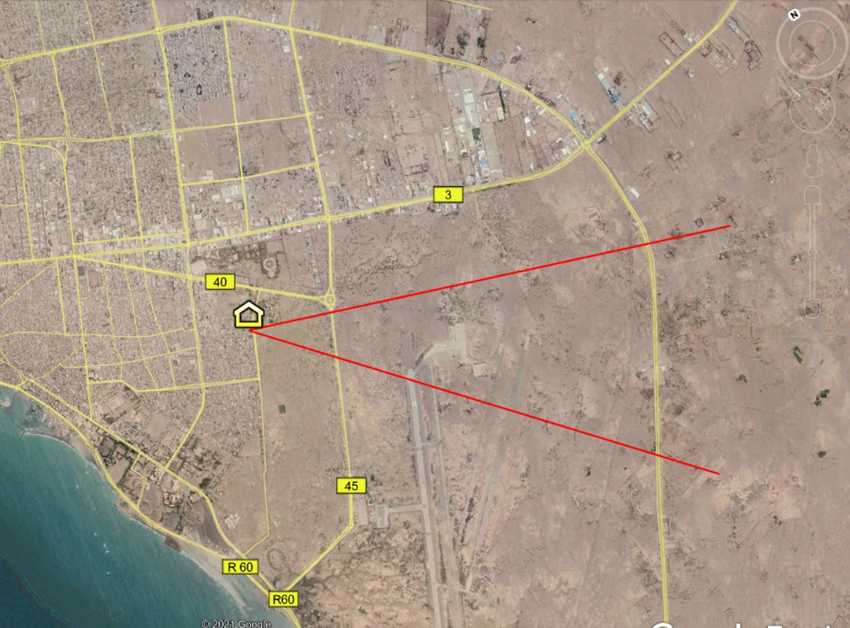 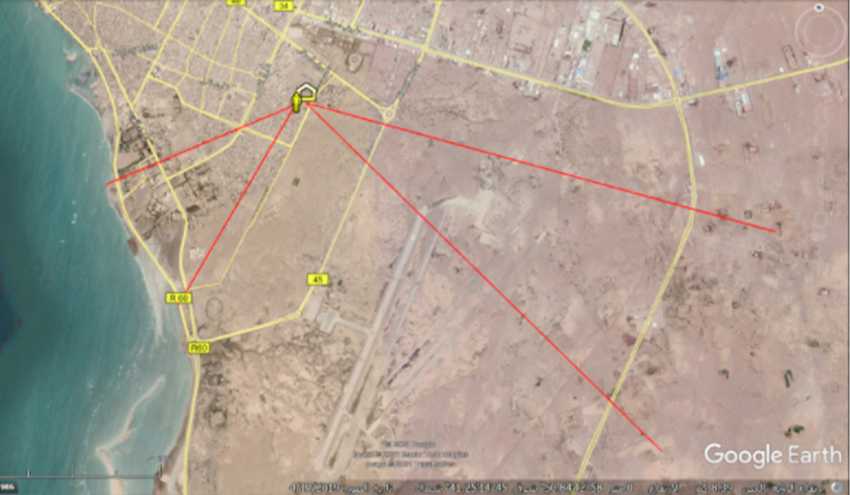 To determine who is responsible for the shelling it required both identifying the distance travelled by the shells and the forces in control of the area where the launch points are located. Yemeni Archive was able to determine the horizontal range of the missiles through Ballistics Law and physics, specifically through the angle of incidence.

Following a parabola, the missile when launched travels to its peak and then falls at the same angle as it’s launch. The distances between the launch and peak as well as the peak and the landing are the same.

Yemeni Archive used an engineering protractor to measure the probable angle of the projectile’s fall into the car and the roof of the building. Visual content shows that their angles are relatively close at 72 degrees. Using 70 degrees as a potential angle of fall as well, the Yemeni Archive calculated the maximum distance the munition travelled.

A picture posted on Facebook by user Qasim Al Baisi.

A screenshot from a video posted by Aden channel.

In addition to the angle, we needed to know the initial velocity of the projectile when exiting the mortar tube. For the 120mm shell that fell near the house, the maximum probable velocity is at 341 m/s. The shell that fell on the large building was smaller in size and impact and was likely 81 mm with a maximum velocity of around 194 m/s.

To further corroborate our findings, we simulated the munition’s angle of incidence into the vehicle by analyzing the motion of the munitions using the PHET tool. We used three different angles (65, 70, and 75) for the launch and incidence in order to obtain accurate results.

A video of thePHET tool

The 120 mm mortar reaches its maximum range (5.7 km) when the mortar tube is set at an angle of (45) degrees. We set the PHET tool to the same angle to reach the value of 100, which represents the maximum percentage of range when the projectile was launched. We then calculated the percentage of the range reached for each of the three angles and extracted those percentages from the maximum range to get the exact distance.

A screenshot of the PHET tool

The distance of each angle with the maximum range of the projectile at 5,700 meters:

After determining the direction of the incoming munitions and the likely distance from which they were fired, we placed the identified distances of the mortar shells’ launch onto satellite imagery using Google Earth’s scale feature and narrowed the potential launch site to a 2.8 square km area.

Using satellite imagery to identify the terrain of the area as well as the fortifications in place by the two parties to the conflict, shows that the Ansar Allah controls 70% of the potential launch area. The remaining 30% is a sandy area separating Ansar Allah from the Joint Forces site along the road leading to Sanaa Street in Al Hodeidah city. 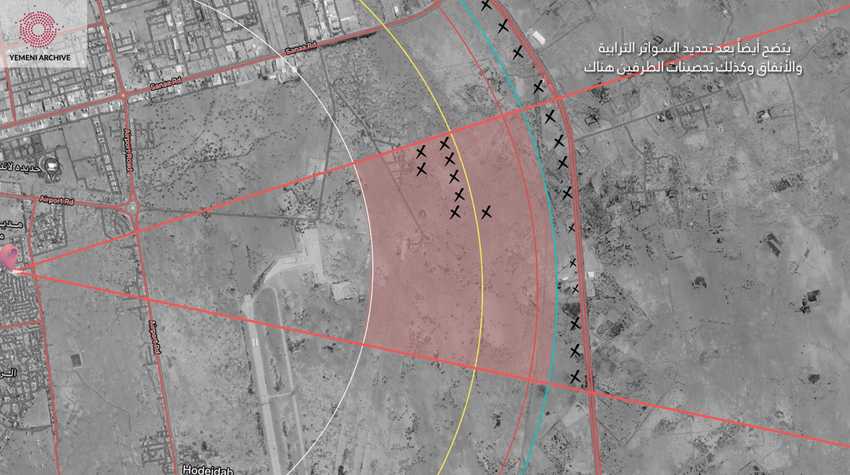 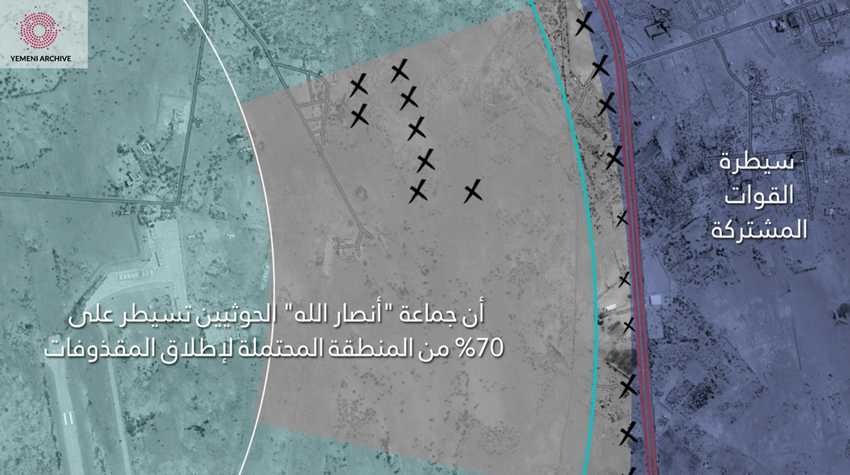 For the second munition, we did not need to follow the previous method to determine the potential launch site as it’s confined to a 2.4 square km area bordered by the sea. Half of the identified area includes civilian houses in Al Rabsa neighborhood making the potential launch area 1 square kilometer. This area includes tunnels and fortifications between buildings, some of which belong to the University of Al Hodeidah as identified in satellite imagery. 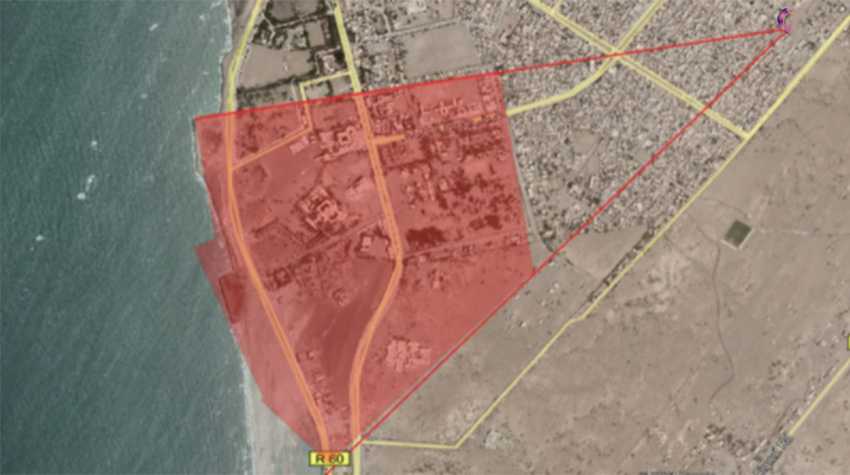 As shown in a video clip from Al Yemen Al Youm, the location of monitoring points implemented by a ceasefire agreement in Al Hodeidah—specifically the fourth point installed between Hodeidah Airport and the Al Mandhar neighborhood near Al Arda’s square at coordinates 14.738547, 42.956521 —confirm the potential launch point as also within Ansar Allah territory. The concentration of forces on the frontline south of Al Hodeidah further corroborates this conclusion. 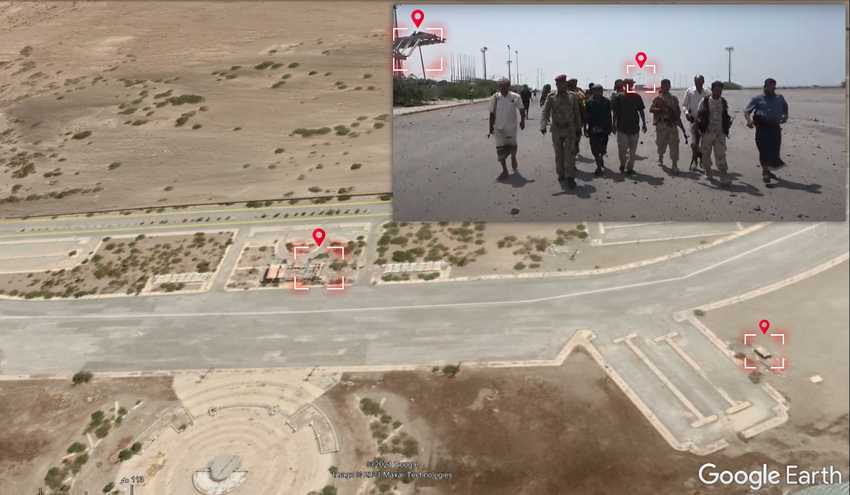 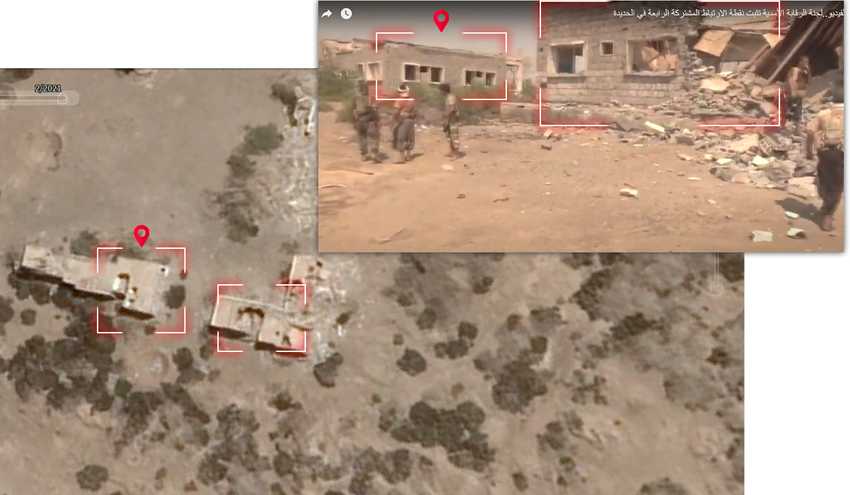 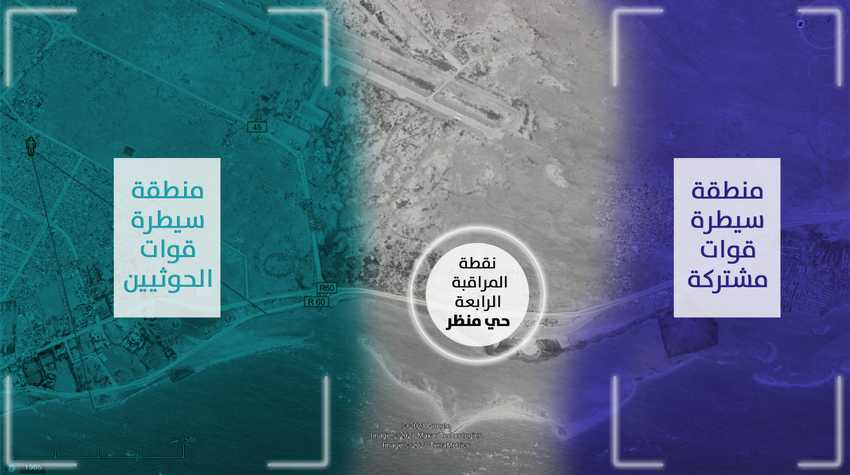 Although there is no conclusive evidence confirming the exact location of the missile’s launch, visual content analysis of the incident indicates that Ansar Allah was most likely responsible for the bombing.

Reports from both sides match on the number of victims of the shelling. Eight people, most from one family, were reported killed by the attack. Their names were published on Ansar Allah website: 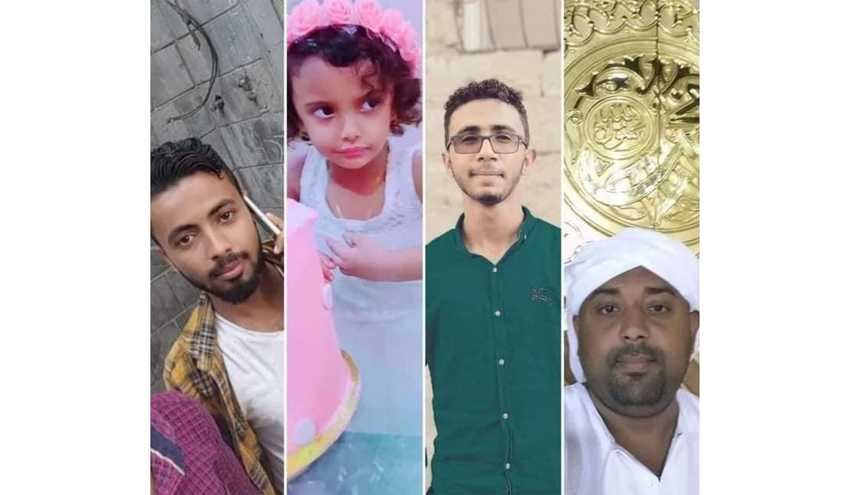 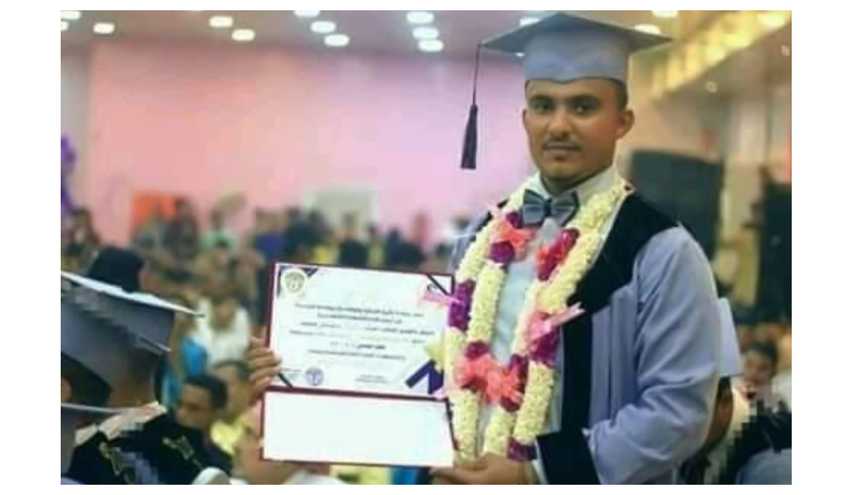 Through the information detailed above, the Yemeni Archive concluded that three mortar shells hit a house and building in Al Rabsa neighborhood in Al Hawk district south of Al Hodeidah city. The shells landed after midnight on Sunday, February 28, 2021, killing 5 people, including a young girl, and injuring 3 others. Most of the casualties were from the same family.

Analysis of visual content of the damage by the mortar shells on the roof of a building and a vehicle parked in the yard of the house shows that the angle of the mortar shells’ launch ranged from between 65 - 75 degrees. The shells approached their targets from different directions; one from the east and the other from the southwest. By analyzing the possible angles and velocity of the mortar’s launch, it is likely the mortar shells were launched from areas within the Houthi group Ansar Allah’s control.