According to reports published on social media and news networks, on May 2nd of this year, the Saudi-led coalition carried out an air raid on a parking lot for trucks at Afar Customs in the Al-Bayda Governorate, in the center of Yemen. Trucks were coming from the port of Aden in the south, with the Yemeni-Saudi borders in the north, to the Al-Houthi controlled areas. The trucks were carrying special food for local merchants. The attack resulted in the deaths and injuries of several drivers, including foreigners from different nationalities, as well as the destruction of a number of trucks belonging to  drivers arriving in Yemen from abroad. To prevent the spread of COVID-19, authorities in Sanaa designated the parking lot of trucks as a customs point and quarantine center for those entering from outside the country.

At the beginning of March, this year, the authority in Sanaa designated three quarantine centers in the Al Bayda Governorate, for foreigners entering Yemen, to combat the virus One of these quarantine centers  was previously a school in the Afar area now serving citizens with COVID-19 and foreign trucks entering the country.

Before this recent attack, the Saudi-led coalition announced a two-week ceasefire, which was extendable at the request of the UN envoy, Martin Griffiths, while Al-Houthi forces refused to abide by it, in a tweet by Al-Houthi forces’s spokesperson, Mohamed Abdel Salam. While Media reports detail previous air attacks by the Saudi-led coalition on sites near the two centers at different times. Satellite imagery show the effects of extensive damage to the center’s buildings suggesting the location has suffered from repeated attacks. However, several media reports (report 1, report 2 and report 3) report that the attack targeted an Al-Houthi military camp in the Al-Sawadiyah district and resulted in a burning of equipment. The footage which were attached in these reports, which were verified, that they belonged to trucks at the Afar customs port, while the Saudi-led coalition has not issued any comment on the incidents

The Afar customs center is located in the Al-Sawadiyah district of Al-Bayda governorate in central Yemen, connecting the north of the country to its south. It is settled in one of the most important land corridors for travellers and goods passes between the areas controlled by the two parties of the conflict.

What happened and when?

At dawn on May 2, several news sites and social media accounts circulated information reporting of an attack on Afar customs in the Al-Sawadiyah district of the Al-Bayda Governorate in central Yemen. An airstrike by a Saudi-led coalition warplane targeted trucks of local merchants carrying food and electrical supplies that were quarantined.

Al Masirah Breaking news Twitter account tweeted at 3:06 am first alerting of the incident. Shortly after, the YouTube channel (ZBJ Action) shared a video from directly after the attack showing burning cargo trucks allegedly from the shelling on Afar customs.

This video’s post time, found by inputting the link into Amnesty International’s YouTube DataViewer tool, was at 04:34, 28 minutes after the tweeted news on the attack. 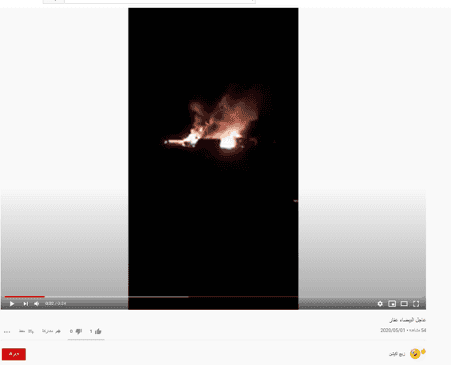 A still from a video posted by the YouTube channel ZBJ Action. 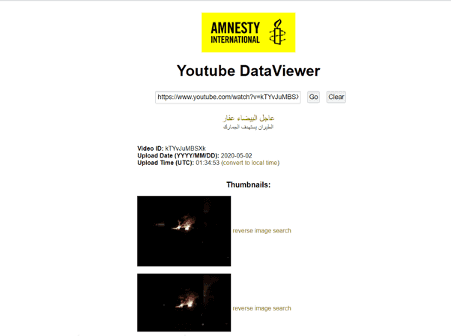 A picture of Amnesty’s DataViewer with ZBJ Action’s video of the attack..

Nabaa news agency, which belongs to Al-Houthi forces, released on its website a statement issued by the Customs Authority on the attack. The Authority confirmed that, when established in November 2019, the attack’s customs yard site’s coordinates were shared with the United Nations. The statement emphasized the importance of Afar for transporting food and medicine across borders especially after the closure of Al Hodeidah port. Given the importance of the customs station, it is likely that hundreds of trucks loaded with food were parked in the center.

A paragraph from the Customs Authority statement, published by Nabaa news agency, stating that the Saudi-led Arab coalition aircraft targeted, at dawn today, the Afar customs center, in Al-Bayda governorate, with several strikes

Later, the same day of the attack, a video was published on YouTube of a recorded voice claiming to be an Egyptian driver at customs. Speaking to someone on the phone before the accident, the driver said, “We all escaped from the place because the warplane was hitting above us, I will sleep in the car. If I die, don’t forget to take care of my children in Egypt, everything here is being targeted, everything here is being targeted. I will sleep in the car.” In this same video, a voice of one of the Yemeni officials in customs can also be heard speaking to the driver saying, “we didn’t receive any order to allow any authorized or unauthorized trucks to leave customs.”

In a video report by the Almasirah YouTube Channel on the attack (at 08:55) an Egyptian driver named Mohamed Abdel Aziz whose voice and accent matches the one from the man calling someone on the phone, in the video above. In the interview, Mohammed Abdel Aziz states, “The distance between the bombing and the truck was 10 meters. I stood scared, I felt as if the truck and the earth were electrified. 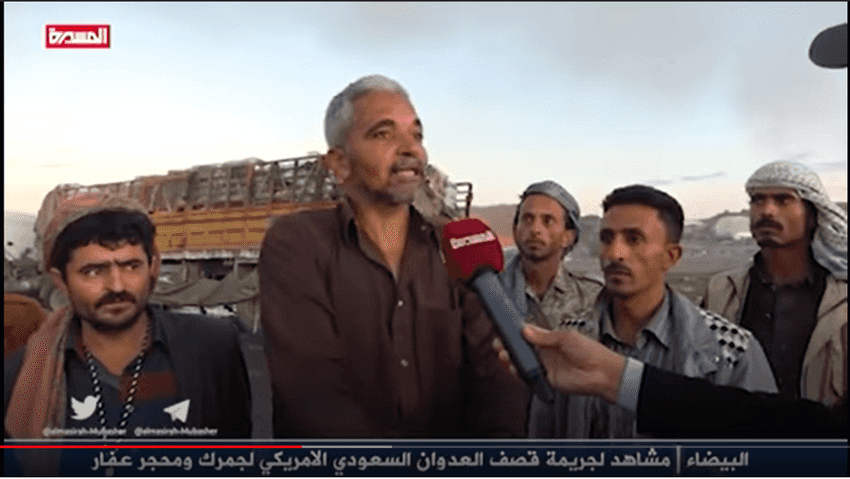 An still from Al Masirah TV report, showing the Egyptian driver at the 8:55 minute.

The statement from a driver who witnessed the attack, in a video report by Al Masirah TV, and claimed it occurred at 3:15 AM, before Suhoor, matches and further confirms YouTube videos and other posts reporting on the attack specifically, Al Masirah Breaking’s tweet alerting of an attack posted at 3:06 AM.

The timing from the content available on social media and news channels is identical to the fact that the warplane was around 3:15 at dawn, 2 May 2020.

Al Bayda governorate is witnessing military conflict between Yemeni government forces and Al-Houthi forces. Yemeni government forces are supported by Saudi-led coalition warplanes, which target locations and reinforcements of the Al-Houthi forces. This is most notably seen in the Wahhabiya area of the Qaniyah front west of Al Bayda. The ongoing battle in this area stands only 30 km away from Afar customs.

The Middle East Wars Maps Twitter account tweeted a photo taken from a satellite image one day before the attack. The image shows areas of fighting, including the Al Awada tribe area, which has recently witnessed rising military tension and the mobilization of tribal militants, and distanced about 20 km from the customs. The main road, which Al-Houthi forces pass through towards the areas of fighting is about 4 km away from Afar customs, making it vulnerable to attacks from Saudi-led coalition warplanes. 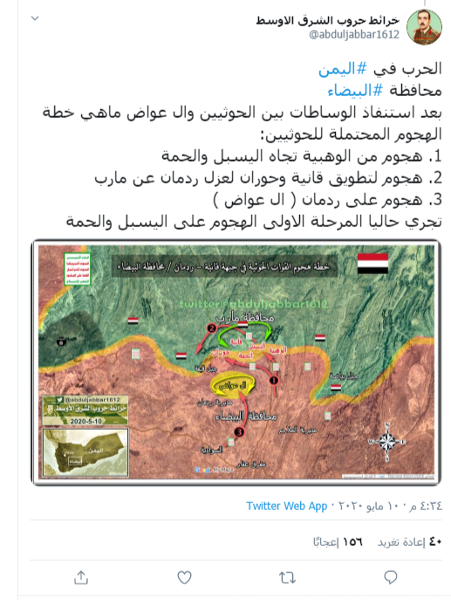 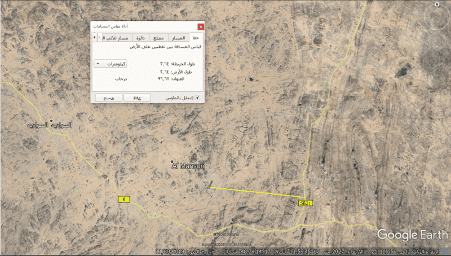 An image from Google Earth, showing the distance between the areas of fighting from the targeted customs.

Yemeni Archive analyzed landmarks appearing in open-source content published after the targeting of Afar Customs in Al Bayda Governorate matching them with satellite imagery from Google Earth. Yemeni Archive was able to determine the target location as matching the visual content that appeared in the previously mentioned Al Masirah TV Report. 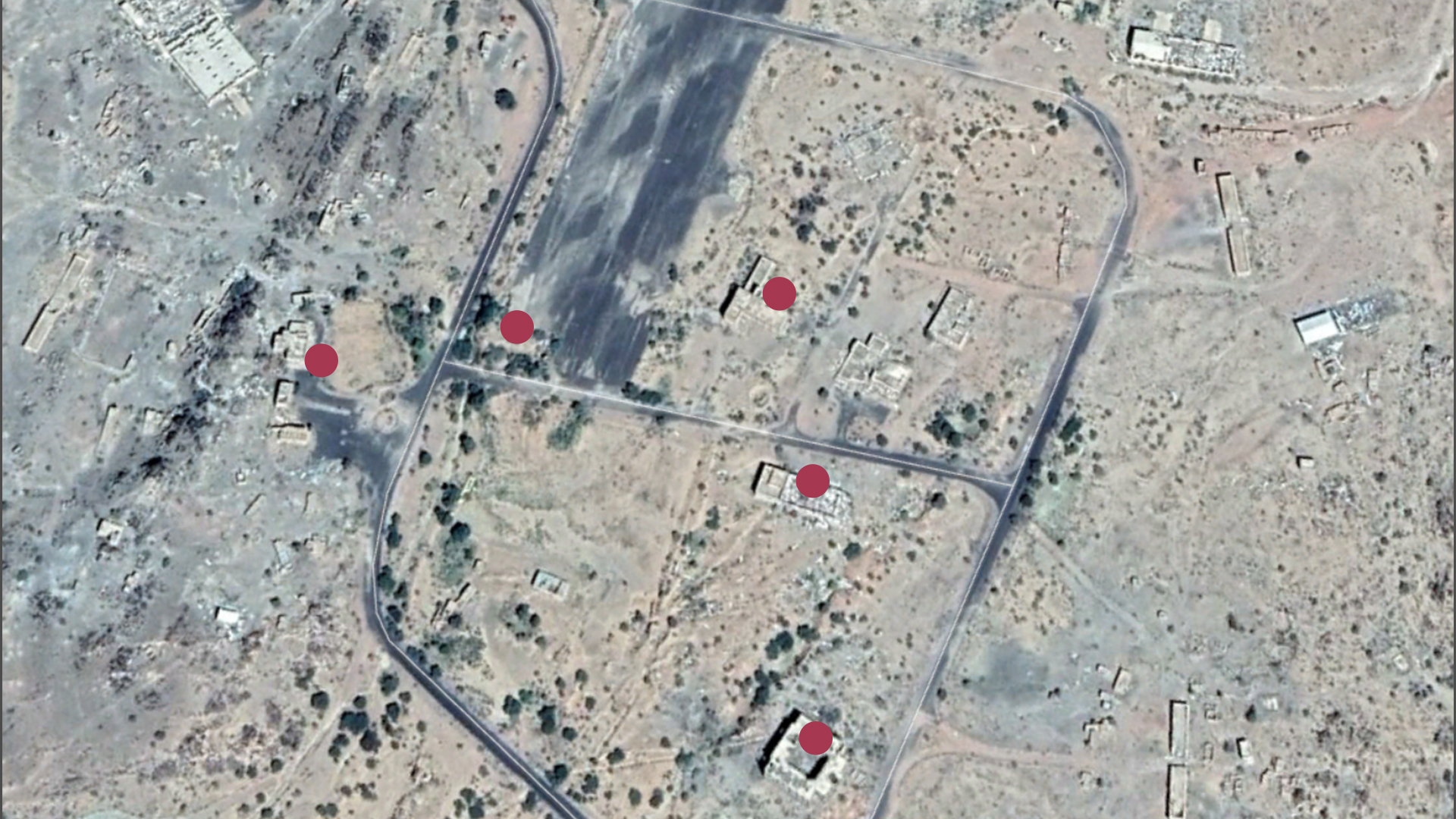 A Satellite image from Google Earth, which was compared to still from Al Masirah’s TV report to determine the location of the targeted area 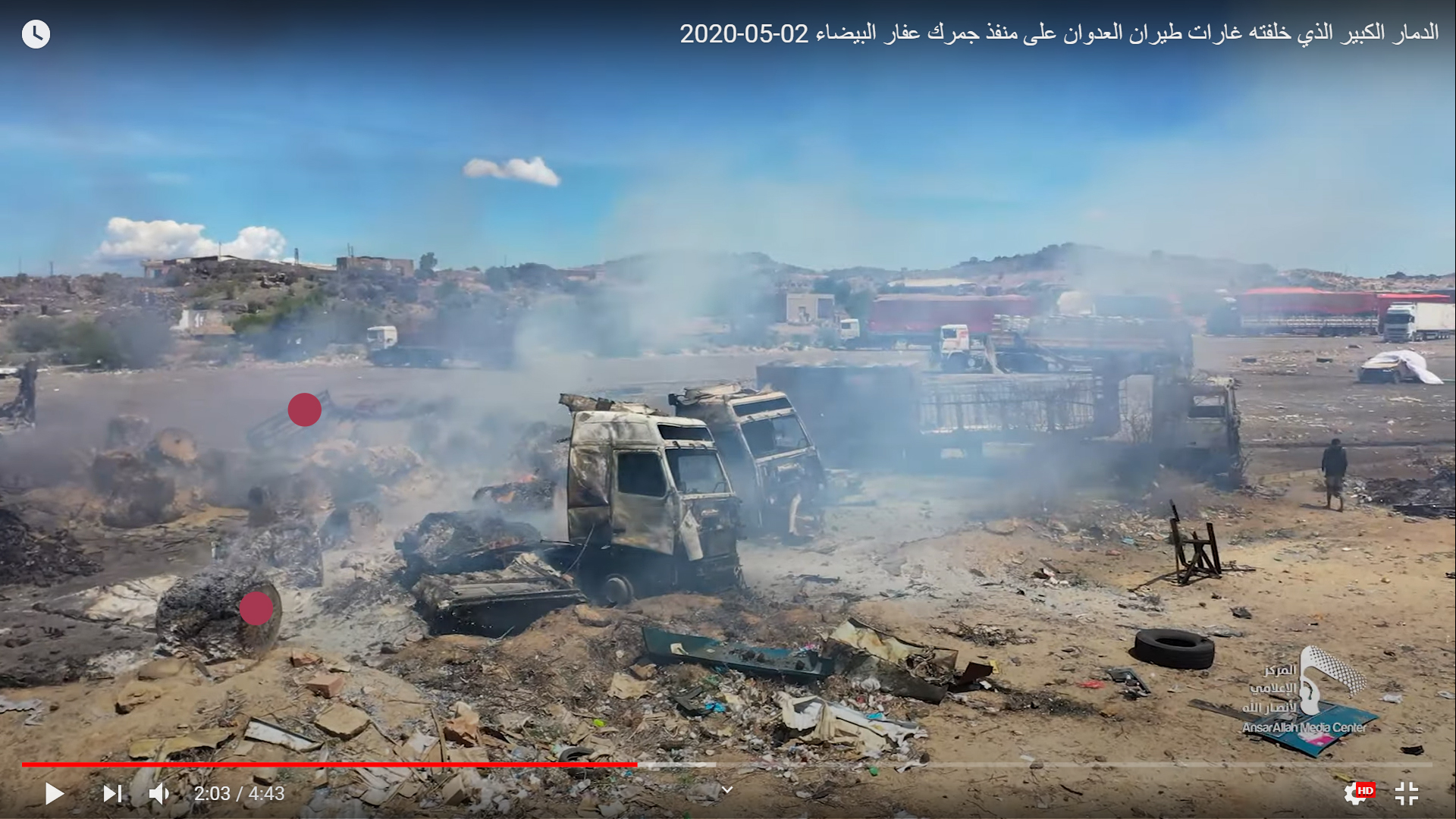 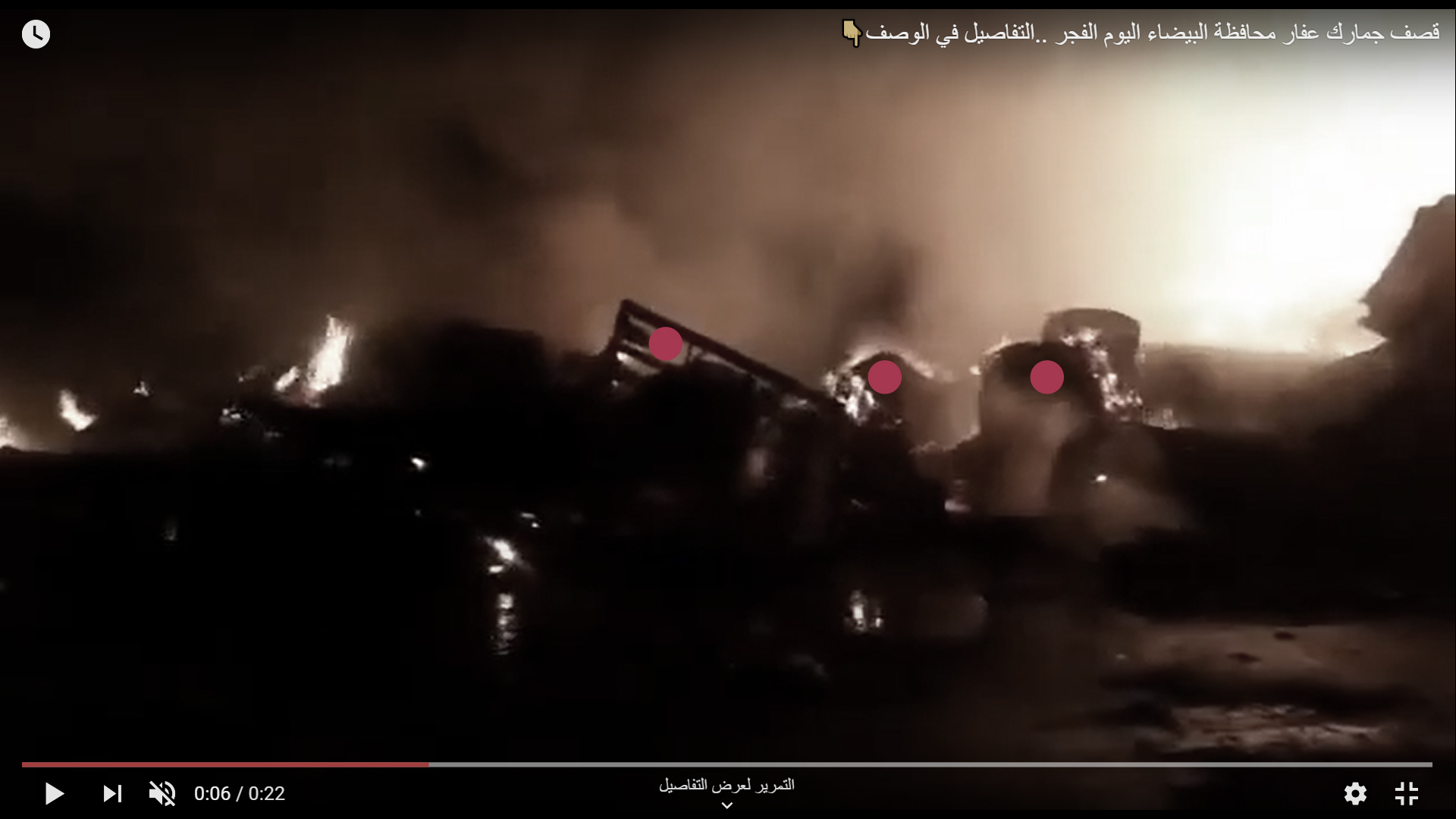 Still images from Al Masirah’s TV report, which was compared to A still from a video posted by the YouTube channel ZBJ Action

As shown in open source media, the airstrikes on Afar customs resulted in the destruction of nine trucks, including its cargo, in addition to partial damage to a nearby truck and SUV vehicle.

This damage is clearly shown in a video report titled “Detailed scenes of the Saudi-American aggression crime of bombing the Afar Customs and Afar quarantine in Al-Bayda Governorate” posted the day of the attack. In the report, aerial footage shows destroyed trucks that match the trucks shown in citizen media taken at night, directly after the attack. 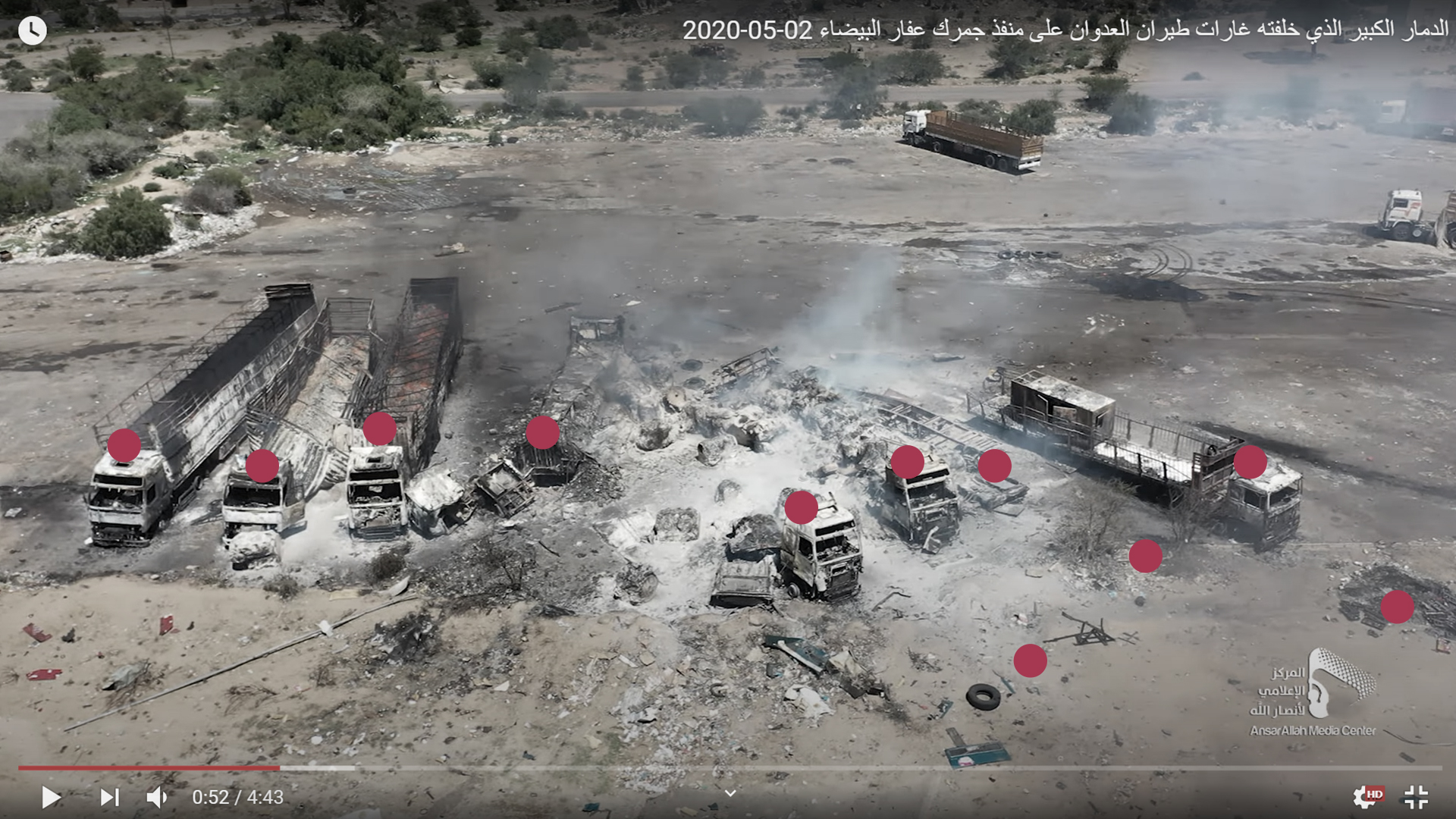 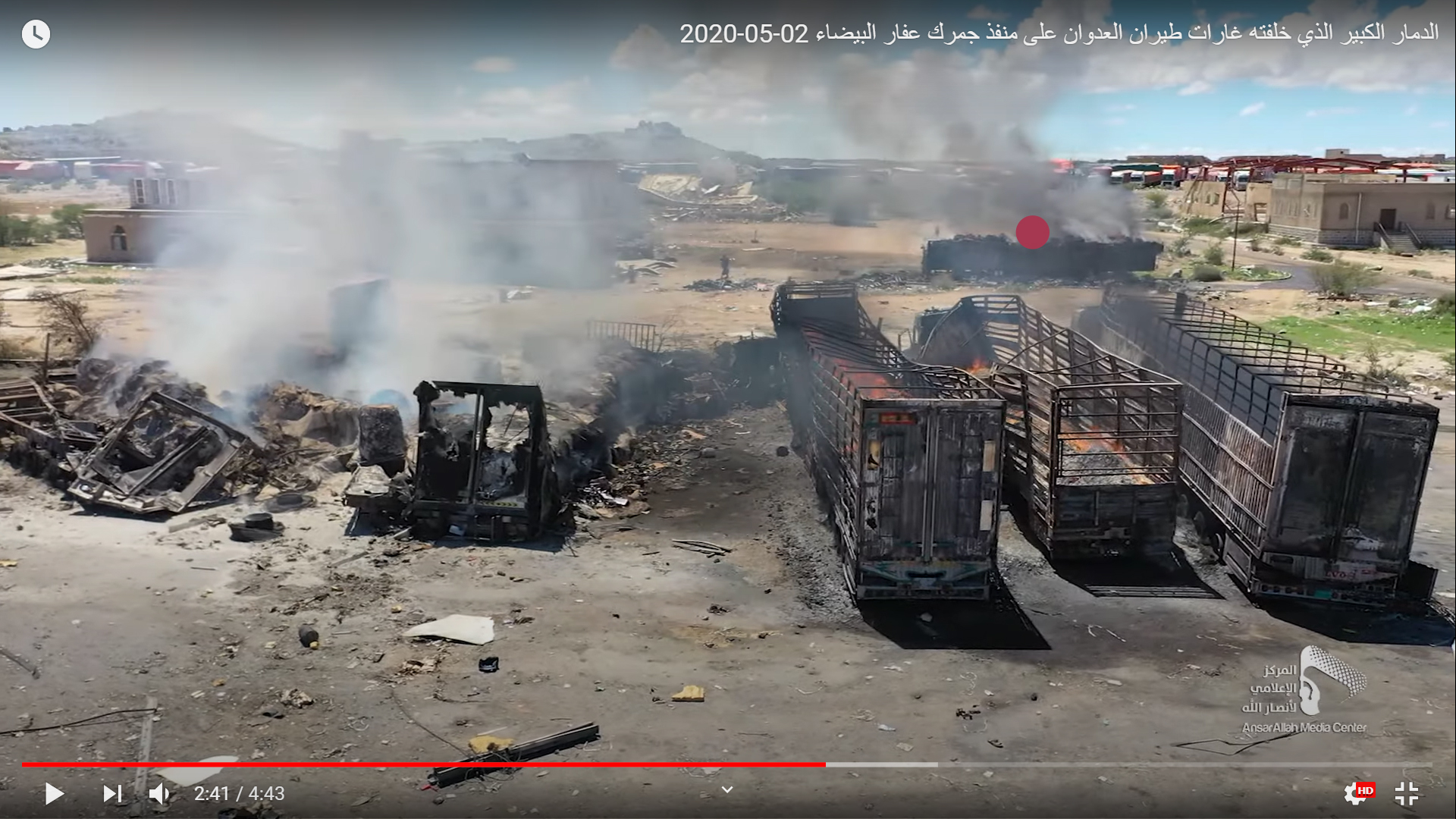 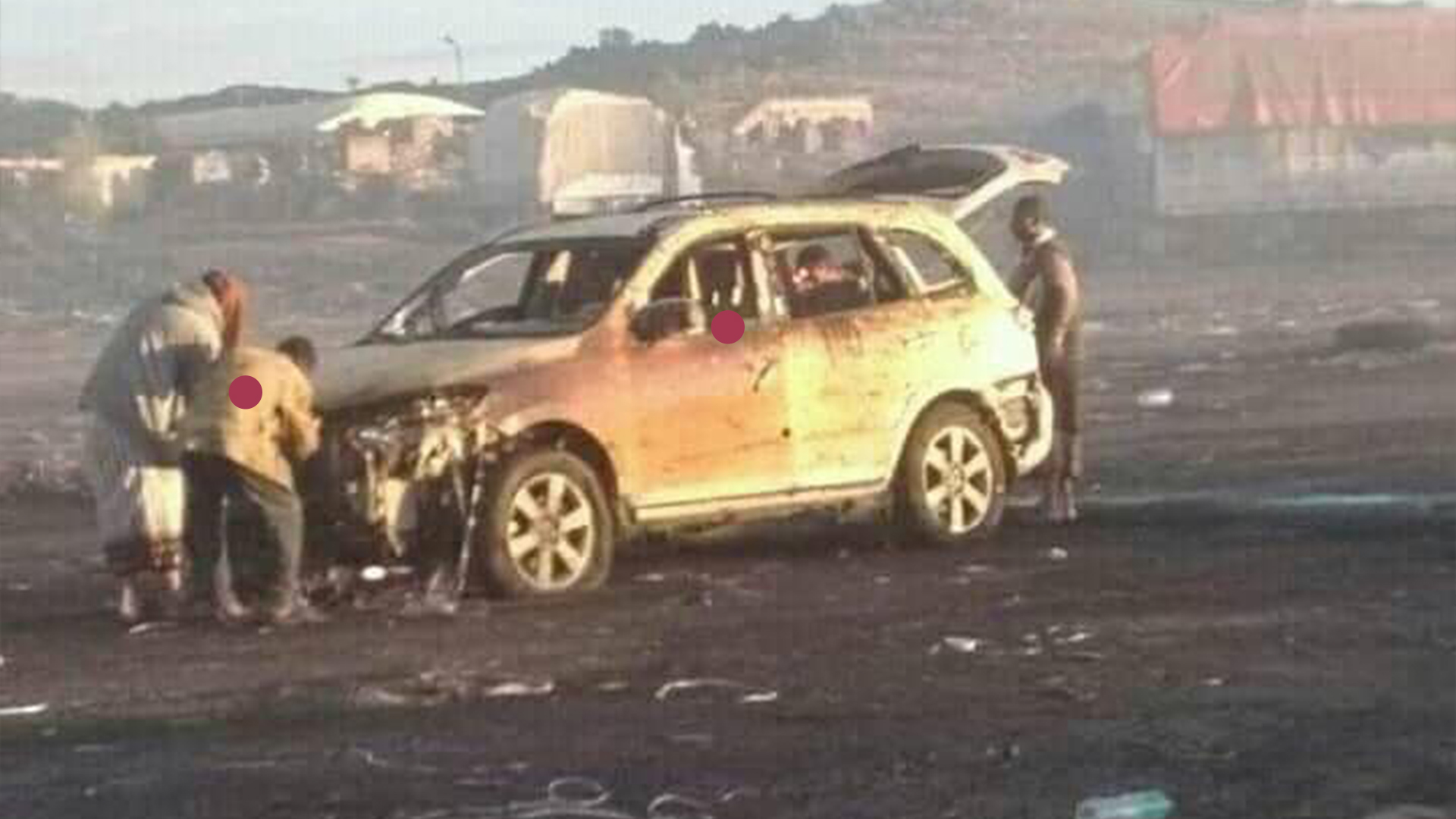 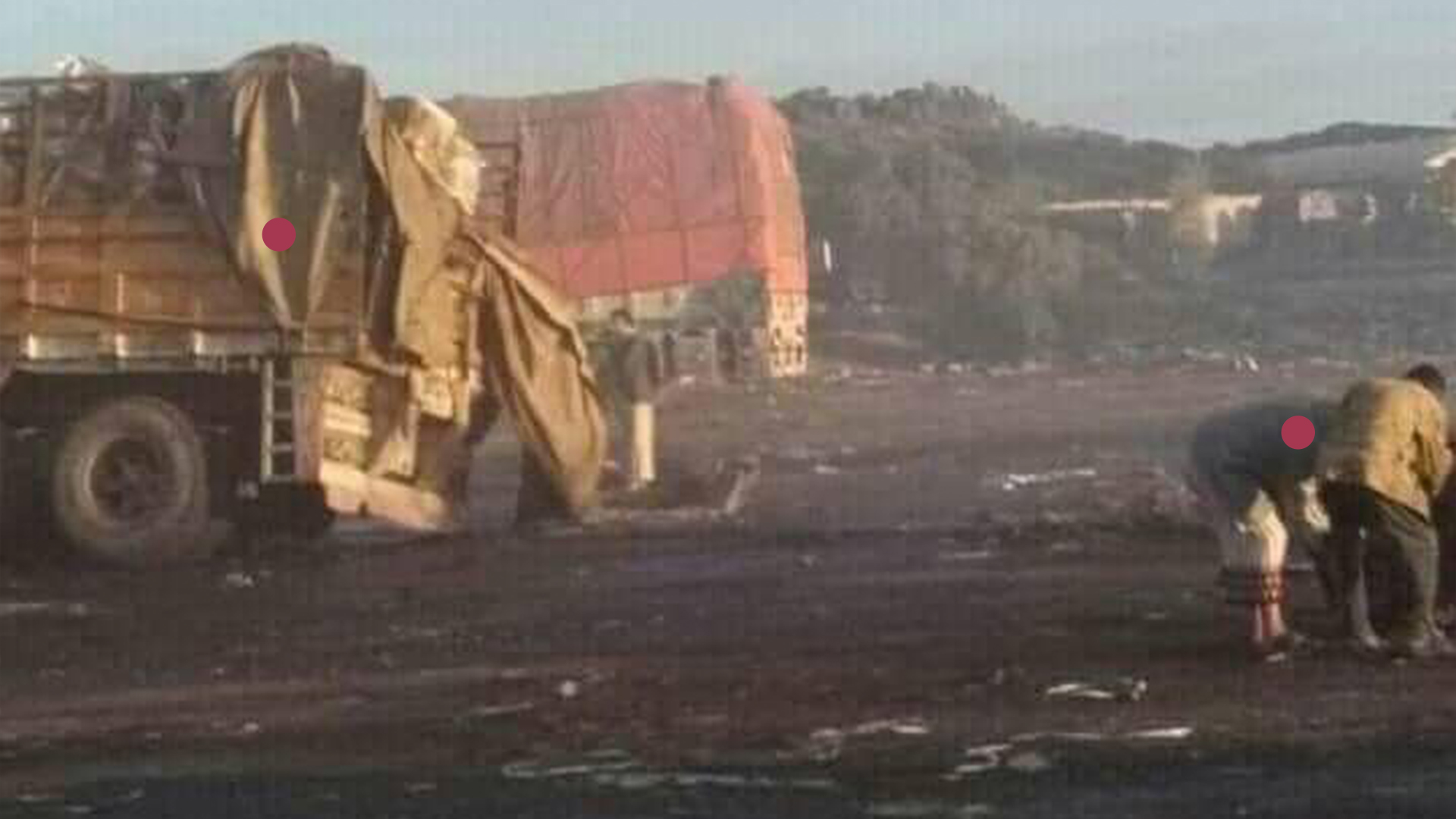 Still images, which were taken from a video published by Al Masirah TV, showing the burning of nine trucks, in addition to the partial damage of a truck and an SUV.

According to the testimonies of truck drivers and customs workers in the Al Masirah TV channel report, as well as the audio posted on YouTube of the Egyptian driver, that the attack was carried out by Saudi-led coalition warplanes, and for several hours, warplanes flew above the area before and after the attack.

Yemeni Archive, were not able to find pictures showing the remains of potential munitions used in the attack. However, based on corroborating testimonies from citizens in the area and drivers at Afar customs, including foreigners, as well as the size of the destruction at the attack site, Yemeni Archive were able to confirm that the attack was by an airstrike. 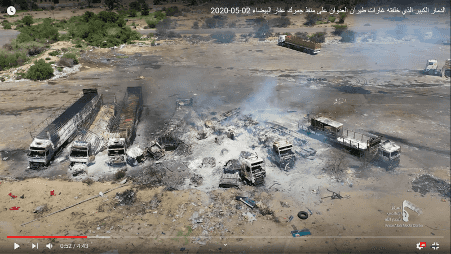 A still taken from a video of Al Masirah TV report, showing that the attack was caused by an airstrike

There are conflicting reports about the number of the victims from the attack. Yemeni Archive were not able to get any official and documented numbers of victims. While a doctor working in Afar customs, who was interviewed in a report by Al-Masirah channel, confirmed saying (at minute 15:10) “the injured people who were placed on an ambulance to the hospital were four people, from different nationalities, along with a number of missing people, while no accurate official statistics are available.

In the same report, another witness stated (at minute 07:13) in the same report that “there were injured workers and customs brokers who were transferred to Sanaa. There were three with small injuries and, so far, they are stable. The number of drivers missing so far is three. We do not know if they were in their trucks or out during the attack.”