After gathering, verifying and analysing visual content published on social media and news networks,Yemeni Archive has concluded that Al Sabeen Maternal Hospital, located to the south of the Yemeni capital Sana’a, was directly impacted by intensive airstrikes carried out by the Saudi-led coalition on the area neighboring the hospital and in particular the headquarters of the Special Security Forces (formerly known as the Central Security). The bombing killed two children and injured medical personnel. 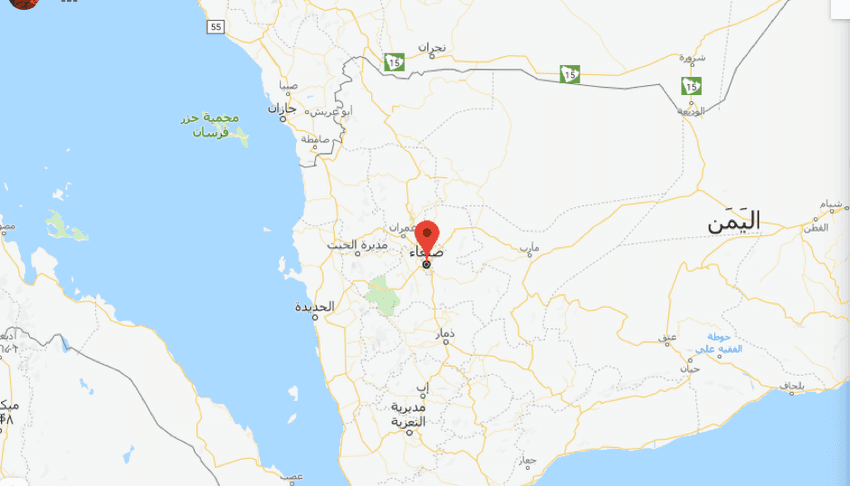 According to evidence and the sources analysed, it has been determined that the attack on the hospital and its surroundings began and continued through the night on Saturday September 5, 2015, and went on until the next morning. Activists began circulating news of the shelling around 8:30 am.

Reports and visual documents compiled by Yemeni Archive confirm the responsibility of the Saudi-led coalition for severe damage to the hospital which forced it to go out of service. Airstrikes also damaged the blood bank, which is the blood bank on which all public and private hospitals in the capital depend.

On the morning of Sunday, September 6, 2015, activists and media circulated information about the targeting of the headquarters of the Special Security (formerly known as the Central Security) and Al Sabeen Maternal Hospital, as well as the neighboring residential neighborhoods. News was also circulated about Al Sabeen Maternal Hospital putting out a distress call because the medical staff were unable to evacuate children and patients from the hospital which was being bombed by the Saudi-led coalition air force. 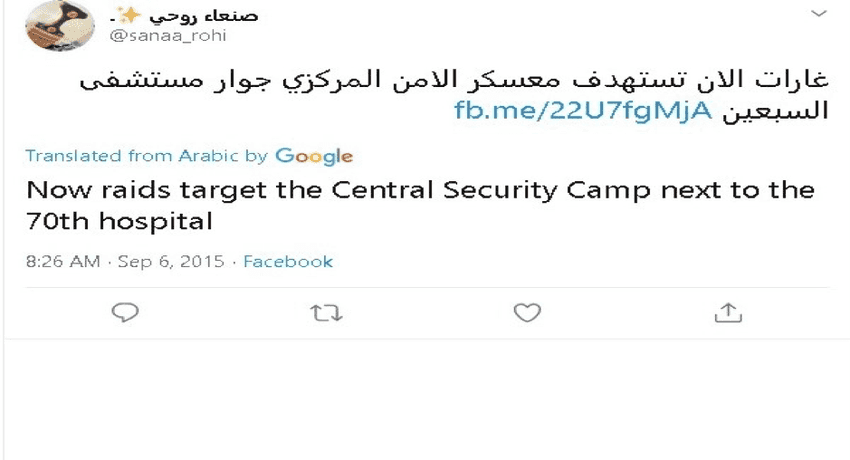 On the same day, Khabar news agency, published a special news report, in which it was said that the Ministry of Public Health & Population had announced that Al Sabeen Maternal Hospital went completely out of service due to the intensive shelling that targeted the nearby neighborhoods. The spokesperson of the Ministry of Public Health and Population, Dr. Tamim Al Shami, explained to Khabar News Agency that Al Sabeen Maternal Hospital was severely damaged by airstrikes that targeted neighboring residential neighborhoods, in addition to the airstrikes on the headquarters of the Special Security Forces.

At 10:05 am local time, Boabt Al Yemen Facebook page (YNG) published a post saying, “After the bombing of the Central Security, the tunnel in Al Sabeen Square was bombed, the tunnel which leads to the presidential house, and we are still seeing rockets falling on the capital.” 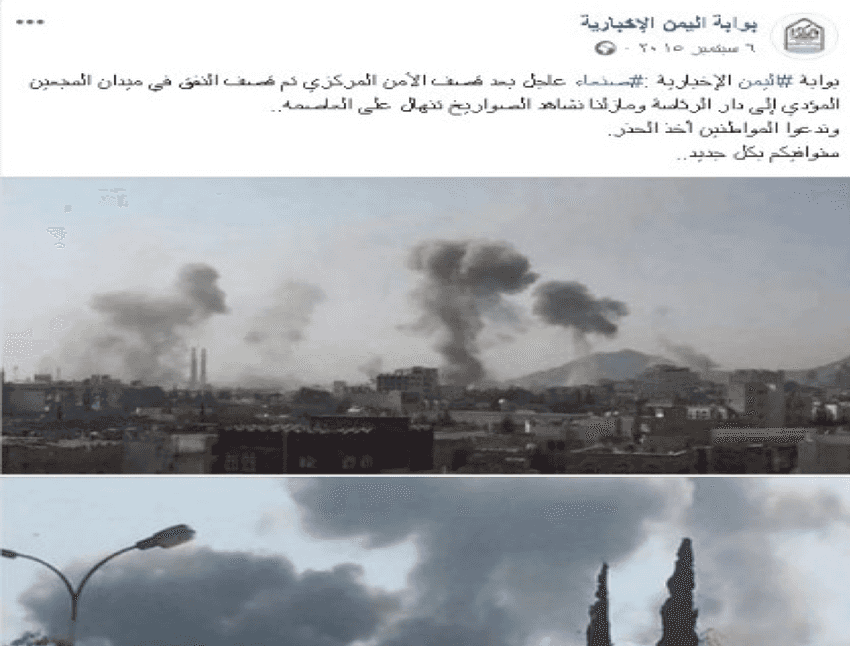 At 2:15 pm on the same day, human rights and political activist Hadi Al Radaei posted a video on his personal Facebook page documenting black smoke rising from the location of the incident. In the video two airstrikes are heard, the airstrikes which bombed the Special Security Forces building, and 27 seconds after the two airstrikes, a third attack is heard. The location of the third airstrike does not appear in the video.

EREM NEWS published a news update saying “Saudi-led coalition launched more than 30 intensive airstrikes on the sites controlled by Houthi forces in Sanaa from Saturday night until this moment. Huge explosions were heard in each of these locations: The First Armored Division camp, the Yemeni presidential building, the Ministry of Defense and Attan Mountain. These are targets that Saudi-led coalition are bombing consistently. Observers said that these airstrikes are the most violent attacks since the launch of the Operation Decisive Storm.”

Mansour al-Faqih posted on his personal Facebook page at 11:08 am local time “Students are fleeing their school after submitting their final exams when Saudi-led coalition air force bombed the Central Security Camp at Al Sabeen in Sanaa this morning.”

In reports published by Al Riyadh newspaper, as well as the Saudi Press Agency SPA, the Saudi-led coalition admitted their responsibility for the attack through statements by the spokesperson of the Joint Incident Assessment Team in Yemen and its legal advisor Mansour bin Ahmed Al-Mansour given at a press conference held on November 19, 2017. The reports read that “the team investigated this incident, and reviewed all documents including procedures and rules of engagement, a schedule of daily tasks, and evaluated the evidence. It was revealed to the joint team based on intelligence collected that there was military activity by the Republican Guard loyal to the former President and supporters of the armed Houthi militia at the headquarters of Special Security Forces Command Camp. The activity was for the purpose of using the command camp to plan military operations. The coalition air force targeted locations inside the aforementioned camp as legitimate military targets, and using targeted bombs, accurately struck the intended targets 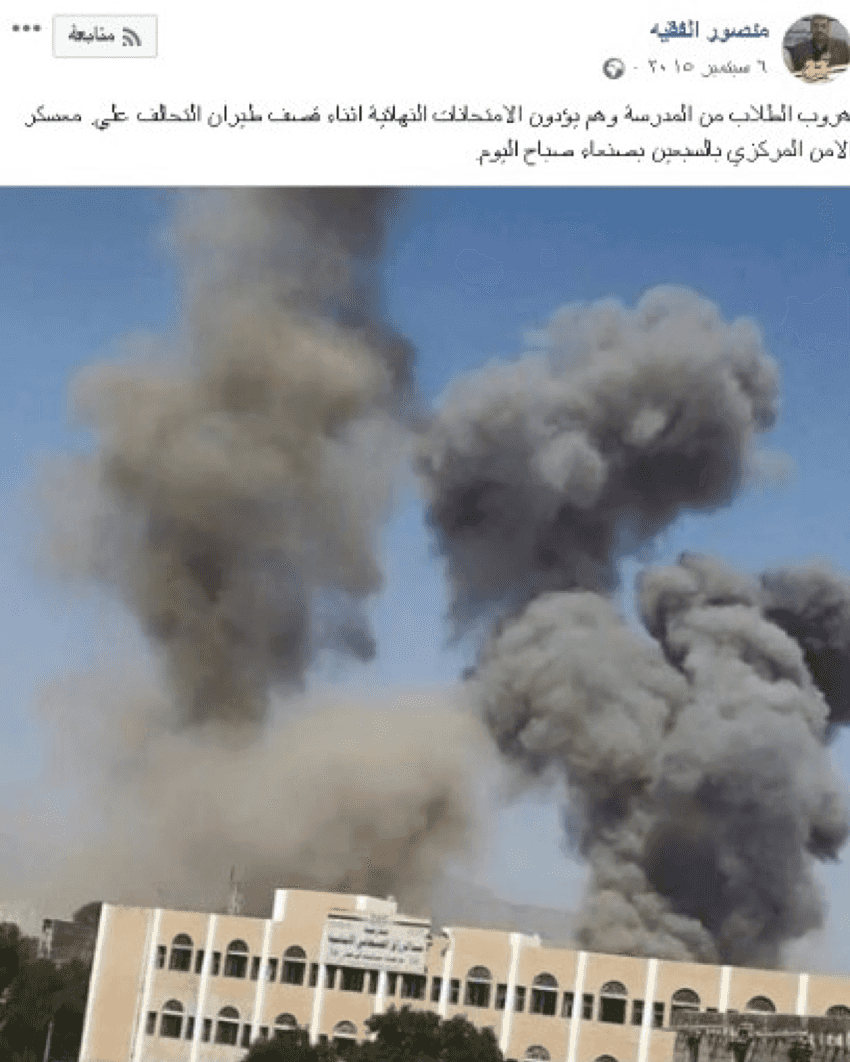 [Al-Mansour] stated that the hospital was exposed to collateral damage due to its proximity to the target (the command camp) with a shock wave that resulted from the aerial bombardment of the legitimate military target. He pointed out that the investigation concluded that the aforementioned hospital was not subjected to any direct attack by Saudi-led coalition forces. It was also indicated by the Joint Incident Assessment Team that coalition forces were providing adequate assistance in accordance with international humanitarian law and its customary laws in dealing with military objects.”

When and where did the attack occur?

The targeting of Al Sabeen Maternal Hospital was part of airstrikes that targeted the Central Security building and nearby residential neighborhoods. The airstrikes lasted from Saturday night September 5, 2015 until the following afternoon. Social media posts were first published about the attack of the Central Security building, located in the vicinity of Al Sabeen Maternal Hospital. The first post was a tweet by a Twitter user @sanaa_rouhi at 8:26 am. At 10:05 am, Boabt Al Yemen Facebook page (YNG) published a post on their Facebook page about the incident, mentioning information about the bombing of the Al Sabeen tunnel which leads to the presidential house. There was further verification of the local time of the attack by Yemeni Archive through analysis using the Timestamp tool which helped determine the time news was first posted to Facebook. News was published on Facebook at 7:05 am GMT which is 10:05 am local time Yemen. 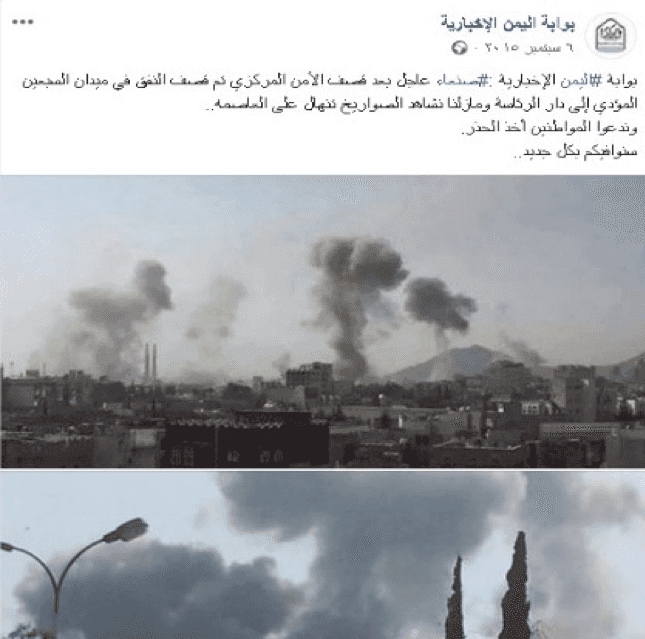 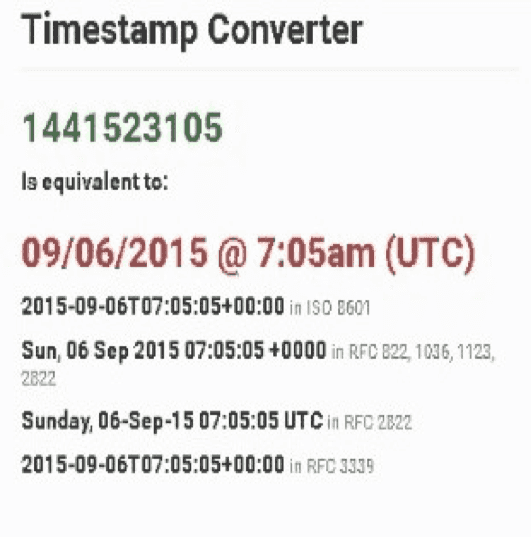 Facebook user Roza Hossin, posted on her personal Facebook page on the same day of the accident, at 10:19 am local time, saying, “Al Sabeen Maternal Hospital in Sanaa put out a distress call to get assistance in evacuating sick children from the hospital due to the intensive bombing of enemy planes in the area.” Facebook user Yahya Al Samawi published a picture of Abdurrazaq Al Sana’ani Primary School, commenting: “Students fleeing their school after Saudi-led coalition air force bombed Sanaa this morning as they were sitting their final exams.” 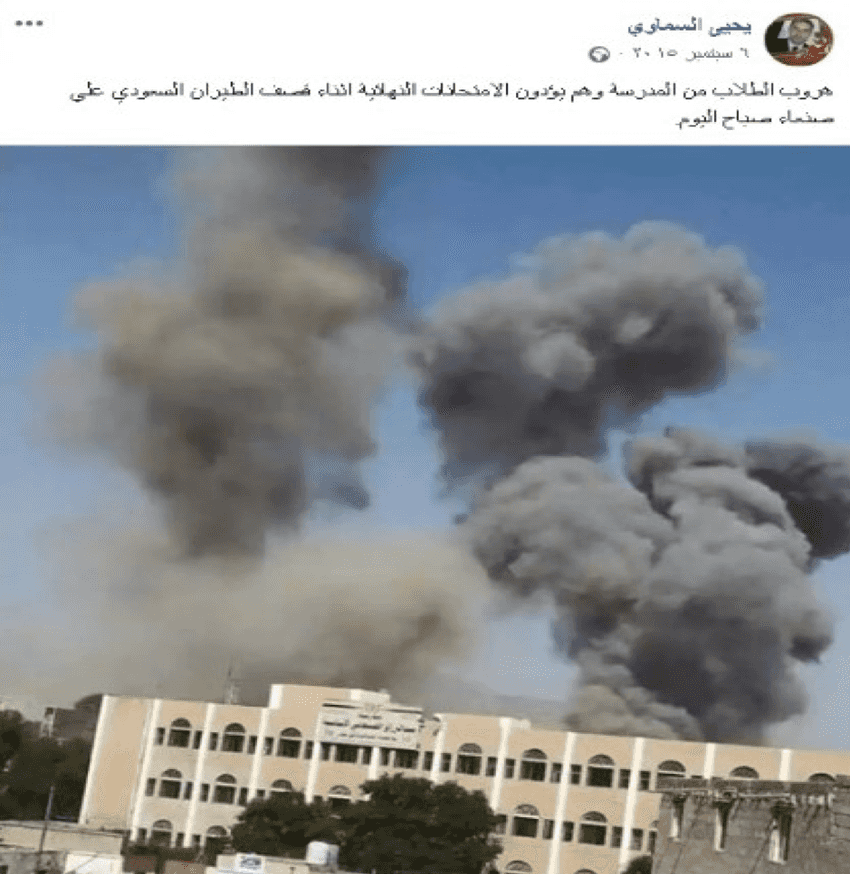 To precisely locate the attack site, Yemeni Archive collected visual content related to the incident, investigated it, identified key markers at the location and compared and matched them with the satellite images taken for the area of the Al Sabeen Maternal Hospital. 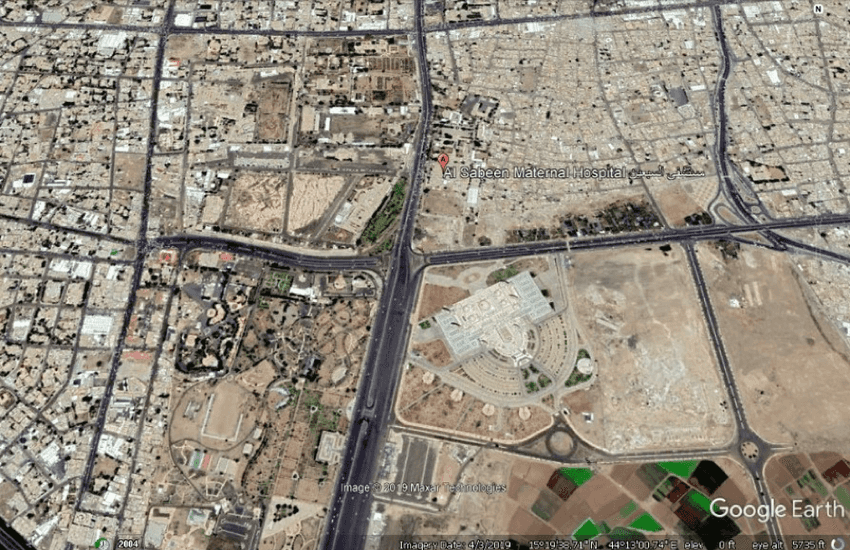 Markers appearing on satellite images of Al Sabeen street, where the hospital is located, matched details found in visual content related to the attack.

In the image above, Al Saleh Mosque (recently renamed to Al Sha`b Mosque), is a few meters away from the Al Sabeen Maternal Hospital. The mosque’s location on Google Earth was matched with images of the attack site documenting the moment of the explosion. 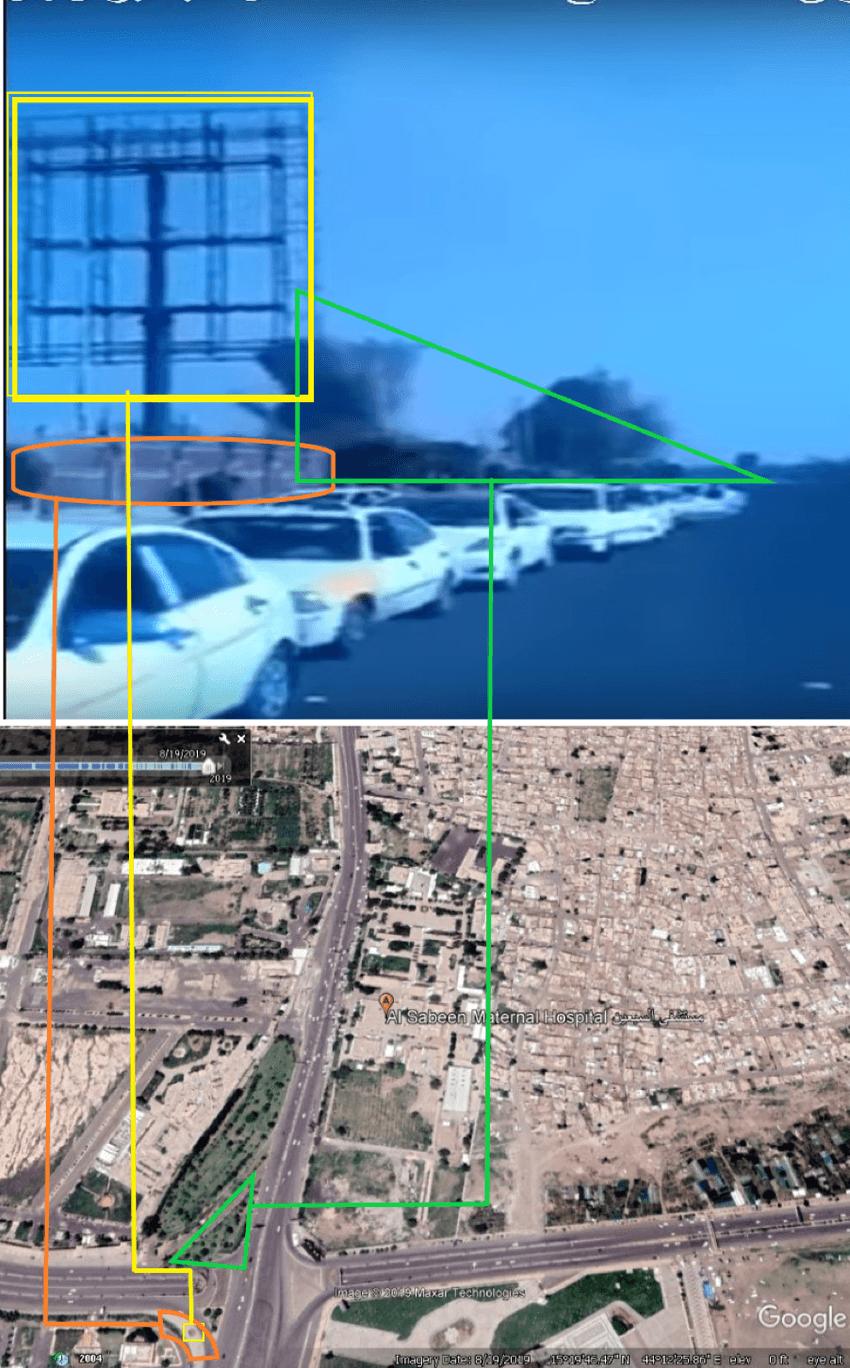 In the image above, a billboard which was captured in a video posted by Mandab Press YouTube channel, matches one to the right of the headquarters of the Special Security Forces shown in yellow, along with a group of trees at the front of the centre. 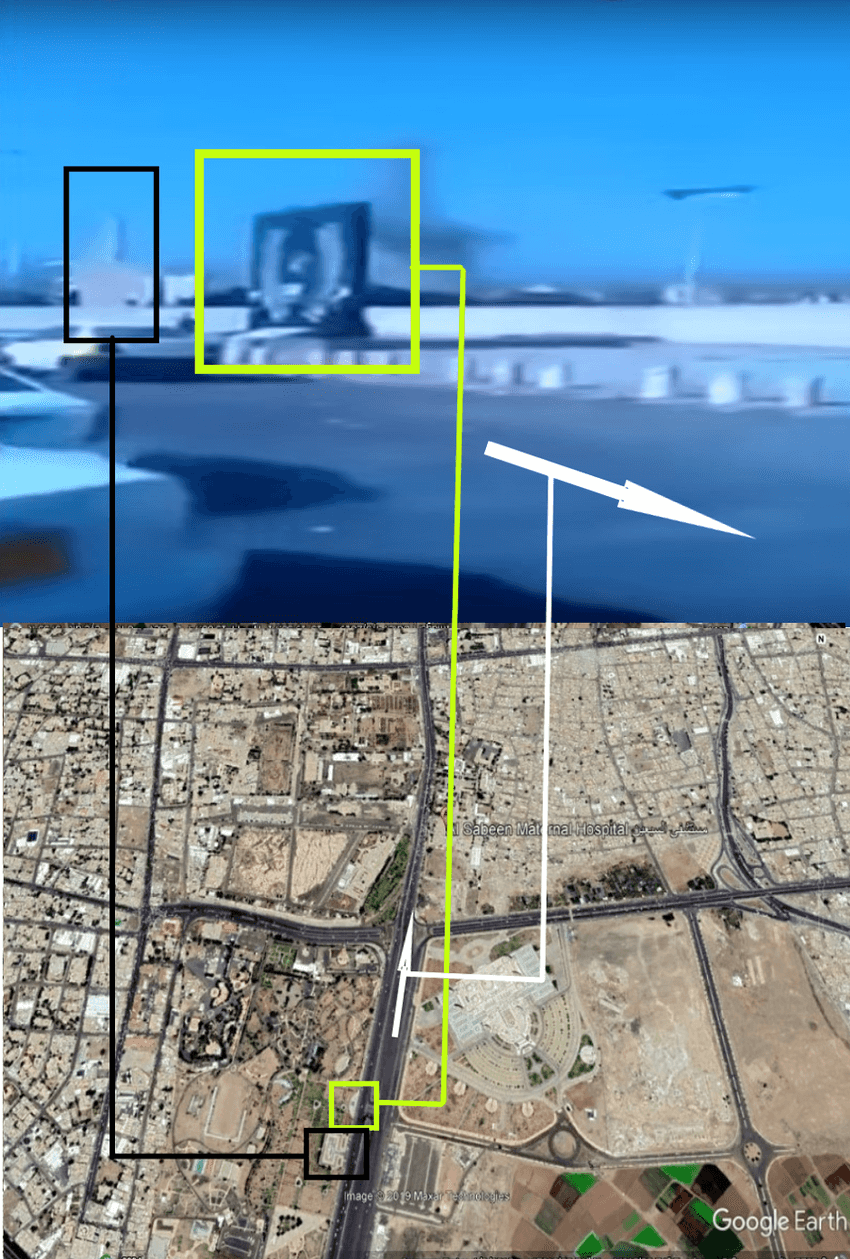 The top image shows the Al Sammad Tomb located on the Al Sabeen Street in front of the Al Saleh Mosque, marked in black, and the Martyrs’ Patform, located about three meters away from the tomb, marked in yellow. The photo was taken from the same video that was published on the Mandab Press YouTube channel which documents the airstrikes. The white color determines the direction of the street going towards Al Sabeen Maternal Hospital.

Determining the impact of the attack

The airstrikes lasted an entire day and shook all parts of the city. The area surrounding the hospital was targeted intensively, and not all of them were military targets according to testimonies by residents. The hospital suffered severe damage due to these airstrikes, most notably was the blood bank which went out of service, which is the only central blood bank that provides various private and government hospitals with blood. The following photos document damage to parts in the hospital. These images were taken from a report published by France 24 on the incident, and from resident Shaima Abdullah’s personal Facebook page. 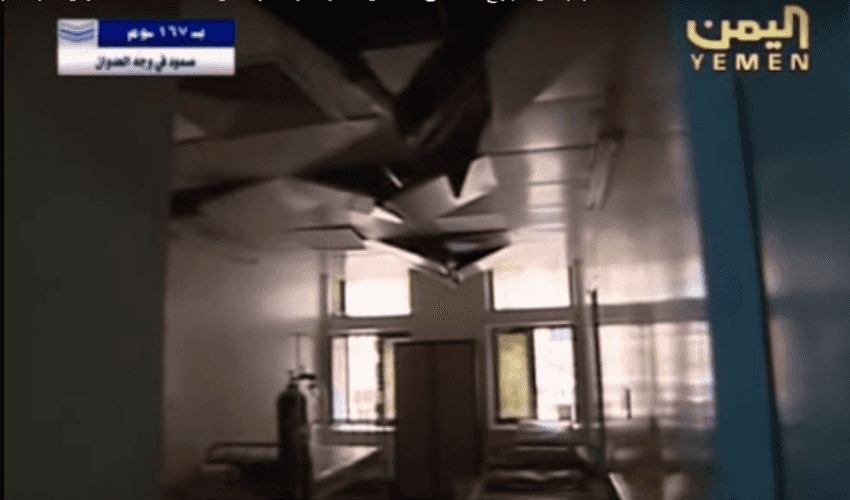 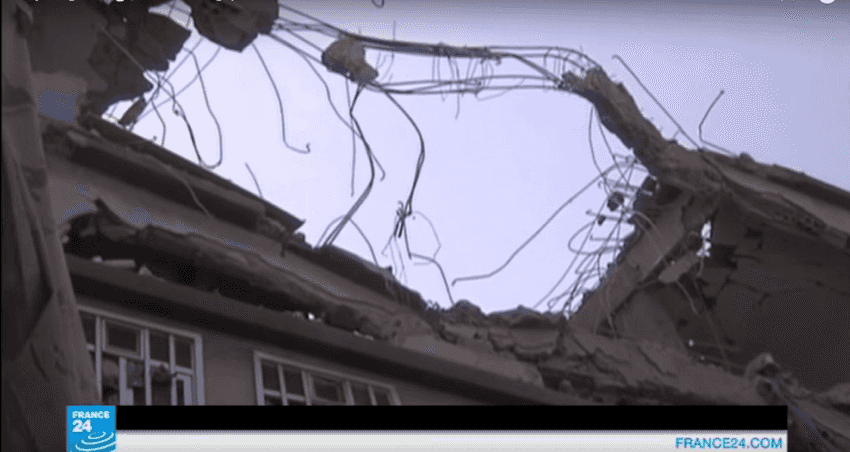 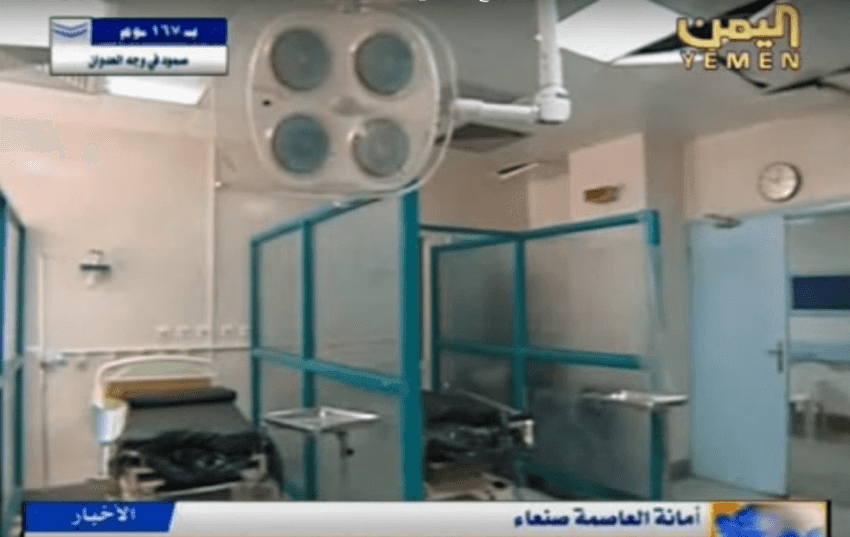 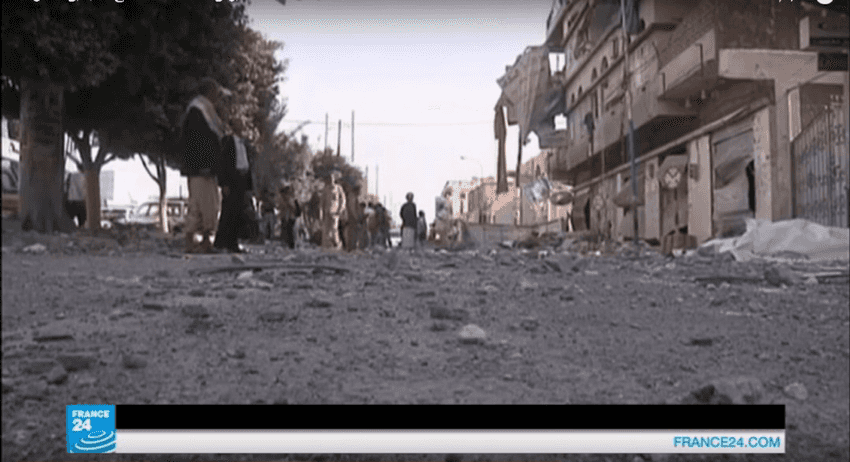 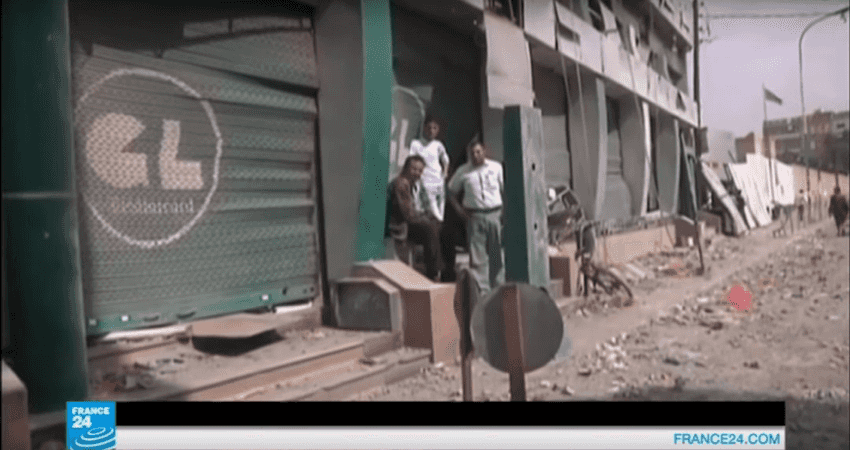 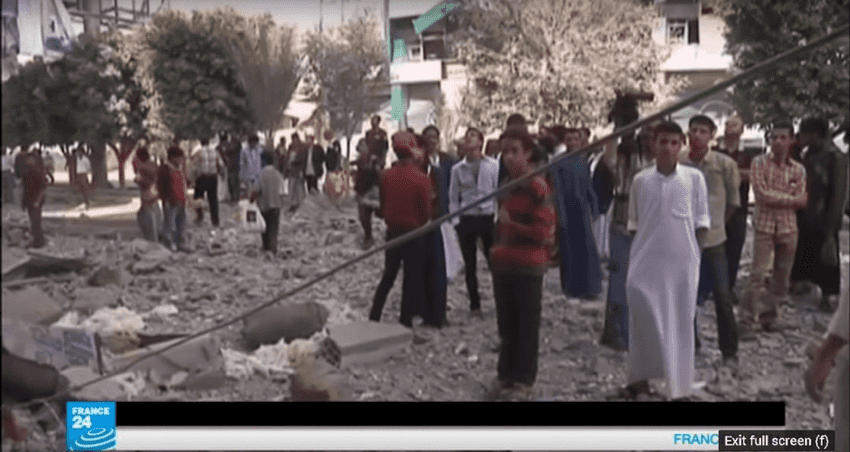 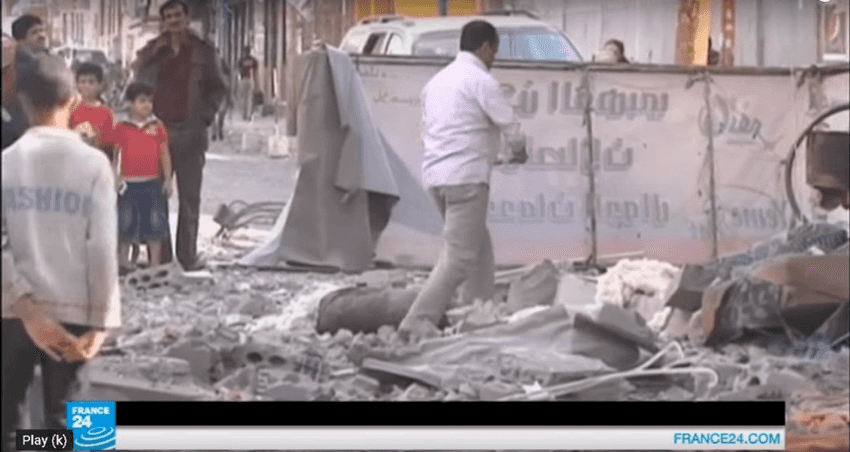 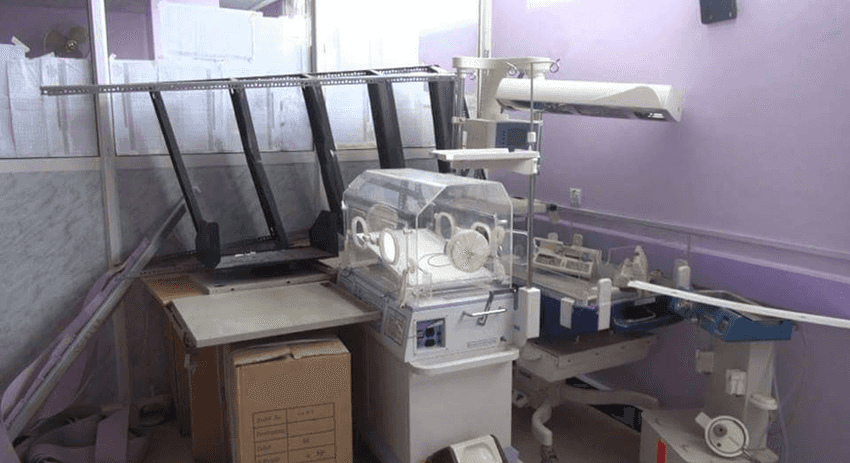 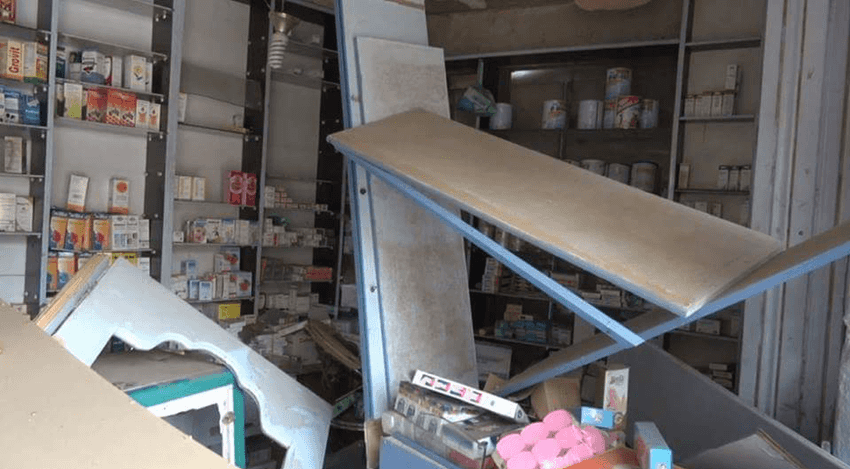 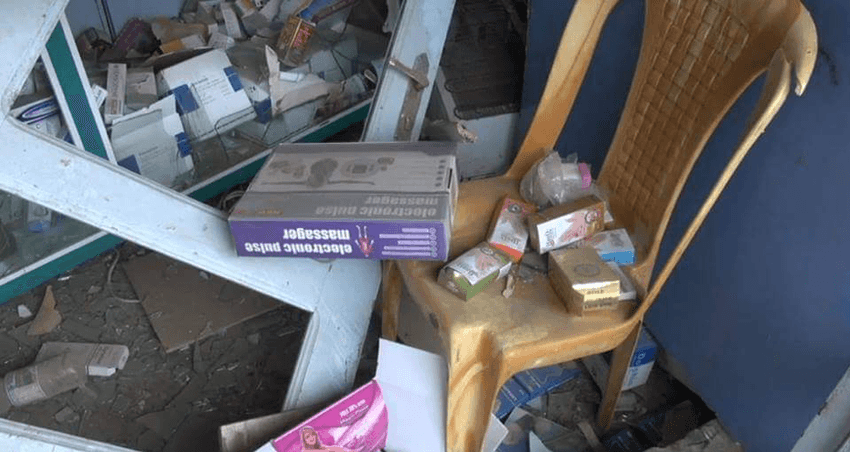 The satellite image below shows the hospital site before and after the attack, where the extent of damage of the surrounding buildings as a result of the airstrikes appears. 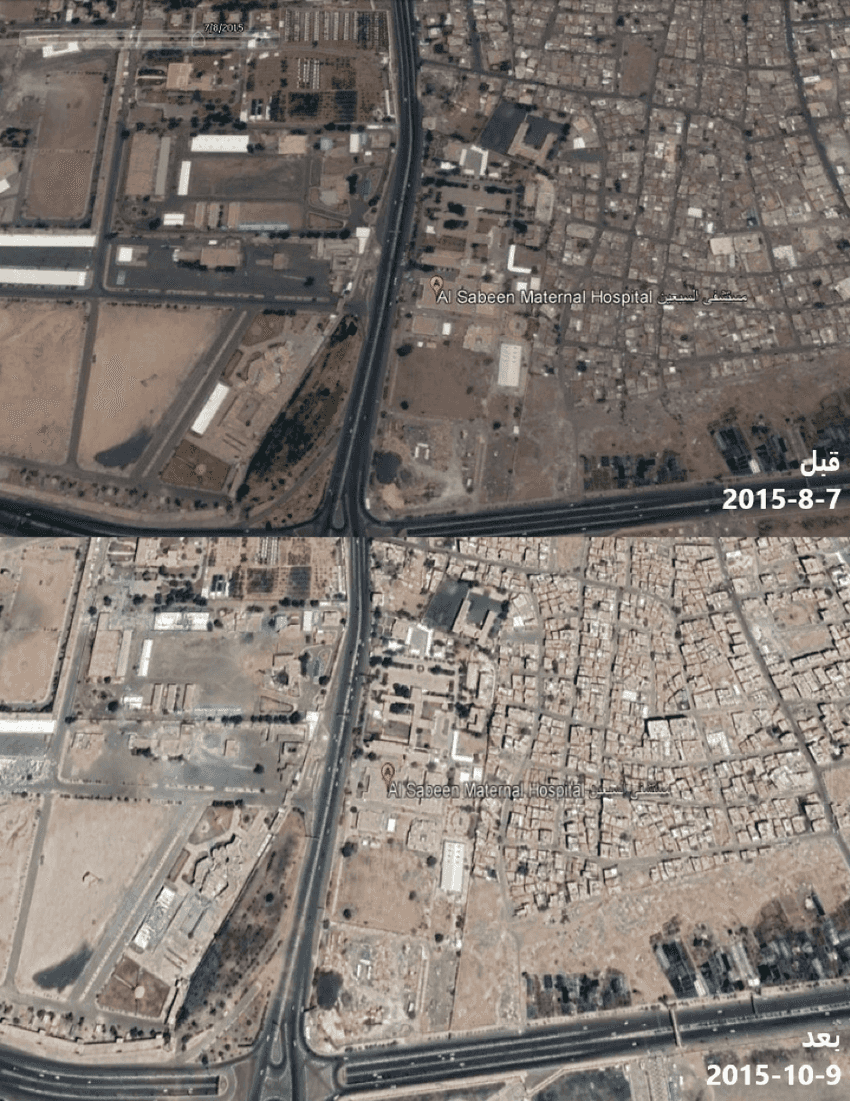 One of the hospital employees, Ammar Al Tam, stated to the The New Arab media outlet that “The hospital was damaged due to its proximity to the headquarters of the Special Security Forces, which led to broken windows in the hospital and smoke and shrapnel coming. Everyone had to be evacuated from the hospital, including patients in intensive care and babies in incubators.”

Civilian casualties due to the attack

At 11:03 am, Al Motamar website published an article reporting the death of two infants, one of them two days old and the other three weeks old. It also reported that a number of other medical staff working in Al Sabeen Maternal Hospital were injured as a result of bombing by Saudi-led coalition forces on the Al Sabeen area in the capital, Sanaa, which was targeted by 12 missiles.