A projectile damaged Al Sabeen tunnel in the capital Sanaa

A projectile damaged Al Sabeen tunnel in the capital Sanaa

On 22-23 December, the Saudi led Coalition air raid dropped a projectile on Al-Sabeen Tunnel in Al Sabeen District, south of the capital Sanaa, as part of a series of raids targeting military sites near the tunnel. The projectile caused partial damage to the main road and the tunnel.

The Saudi led Coalition air raids targeted separate sites within an area of ​​​​a circle with a radius of 1.5 km in Al Sabeen District. The targets included the presidential palace and the Central Security Camp, in addition to the tunnel leading to the presidential palace, at the end of the southern end of Al Sabeen Square. All previous sites except for the tunnel were destroyed (totally or partially) with air strikes during previous years.

On 22-23 December 2021, the Saudi led Coalition launched air strikes on separate locations in the capital Sanaa. One of the strikes hit a tunnel in Al-Sabeen district, causing partial damage to the tunnel and the main road.

According to the features that appeared in the visual content related to the incident published by September 21 website and Muti Al Tawqi Facebook, the damaged site is at the intersection of Al Sabeen Square and Al-Sitteen Street, south of the capital Sanaa, at the coordinates: 15.318600, 44.203794 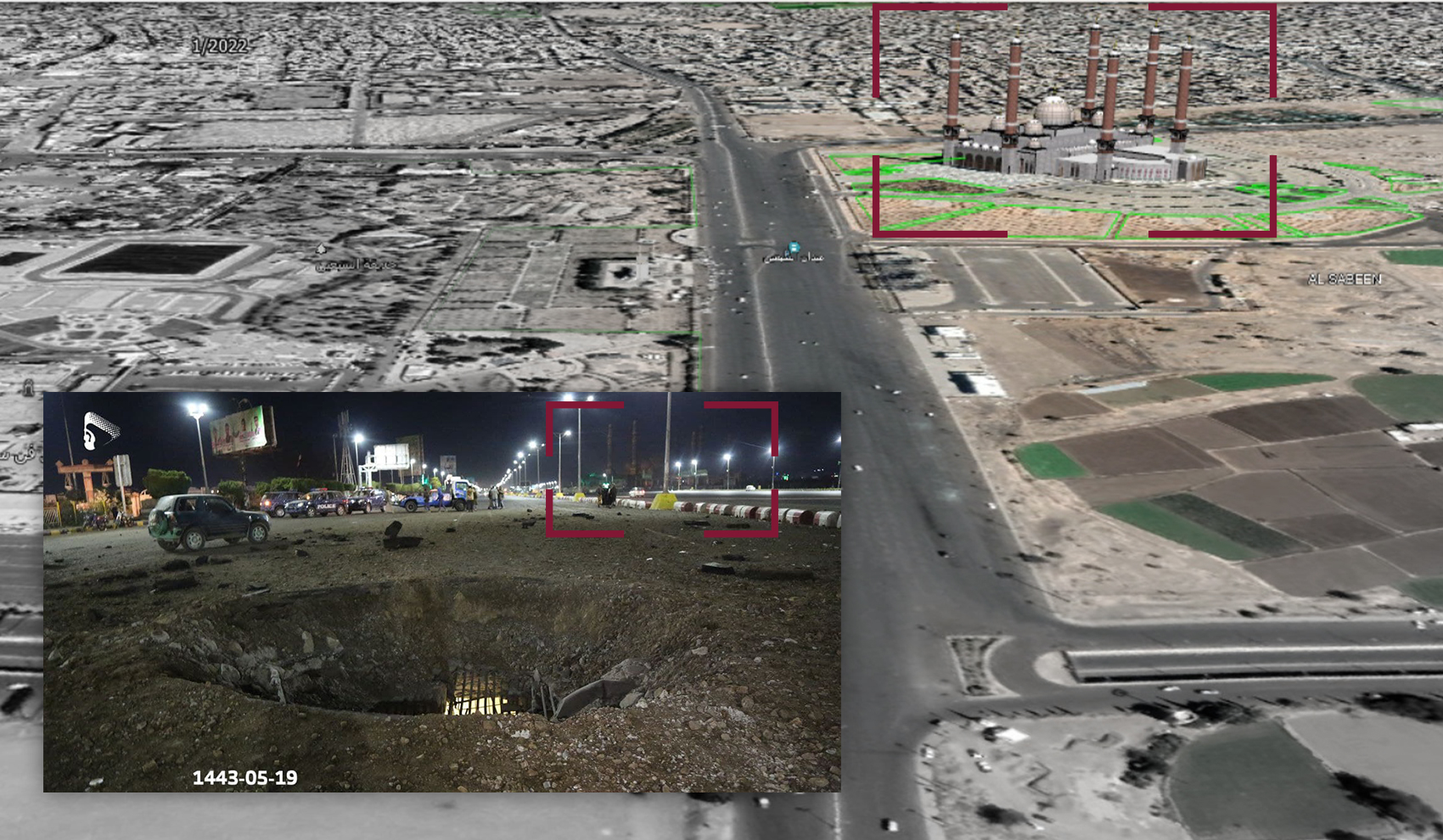 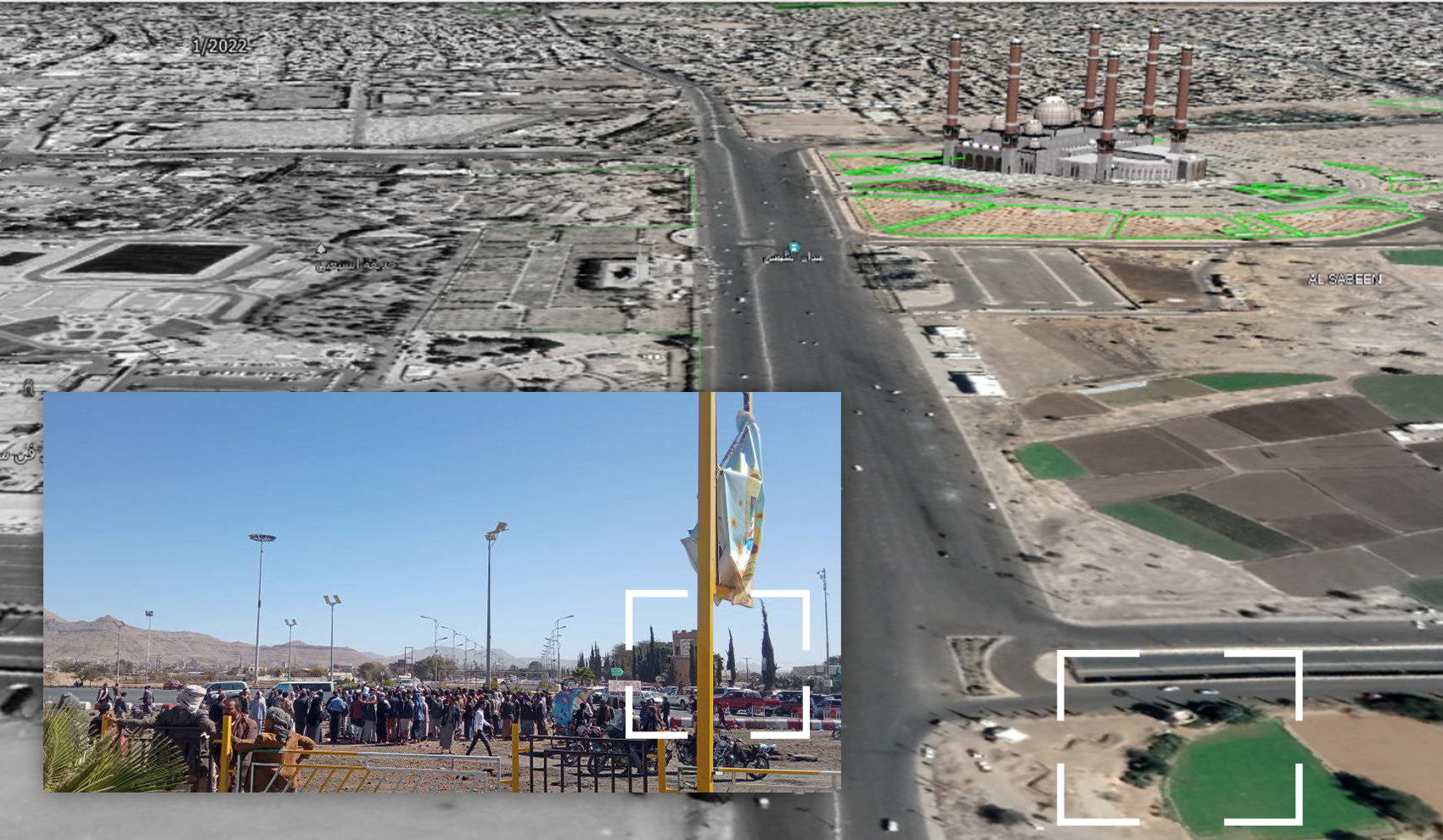 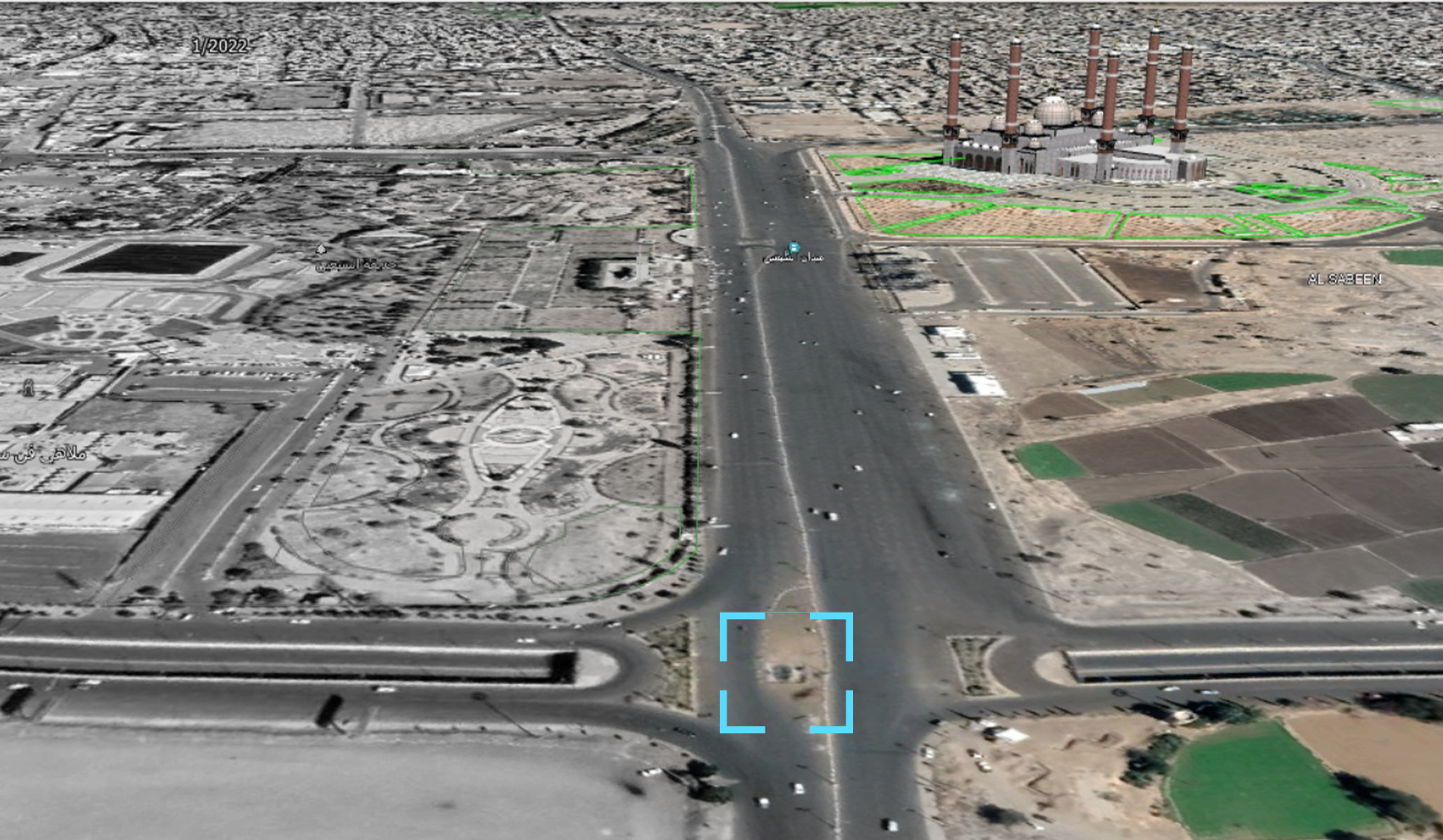 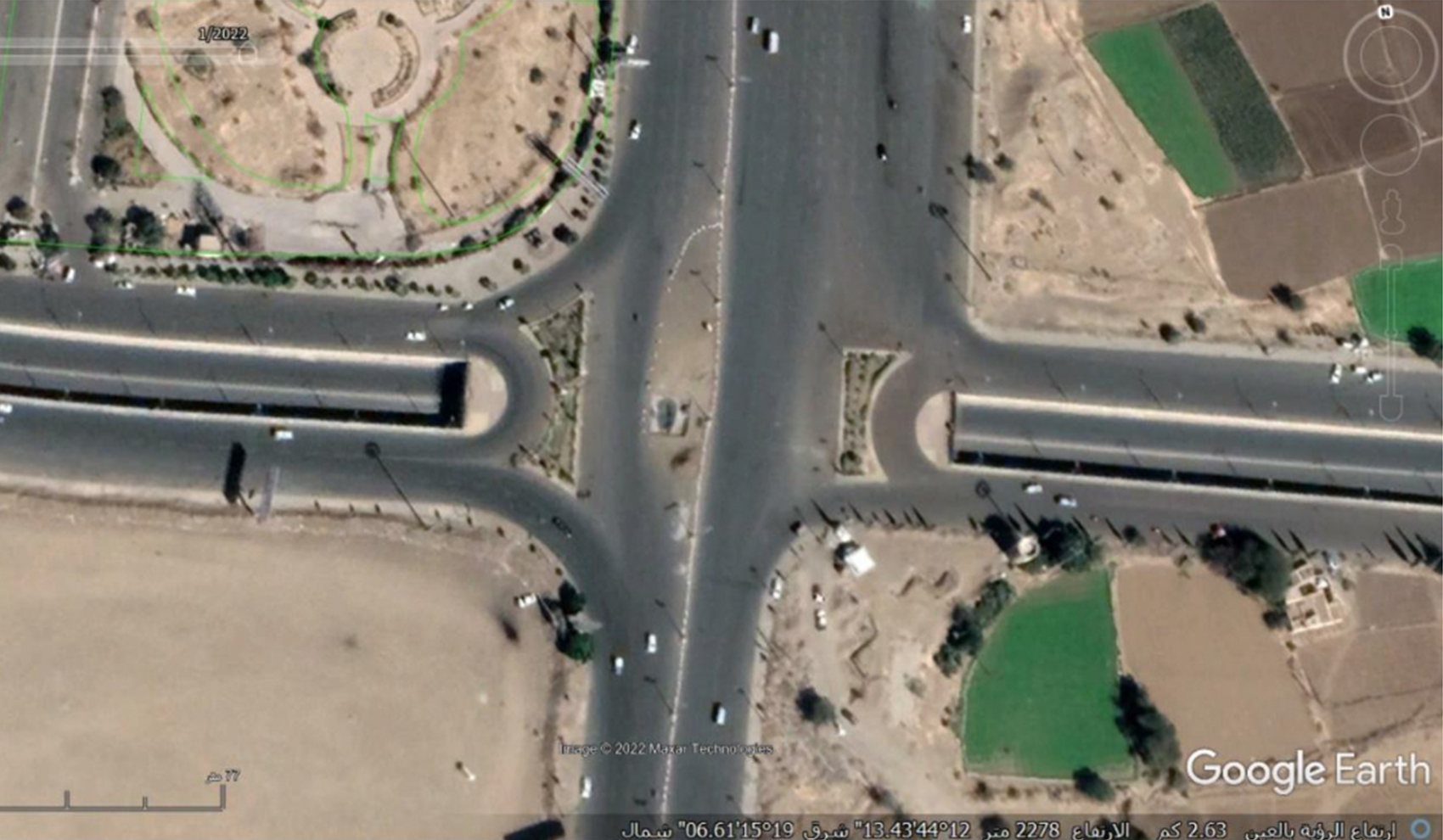 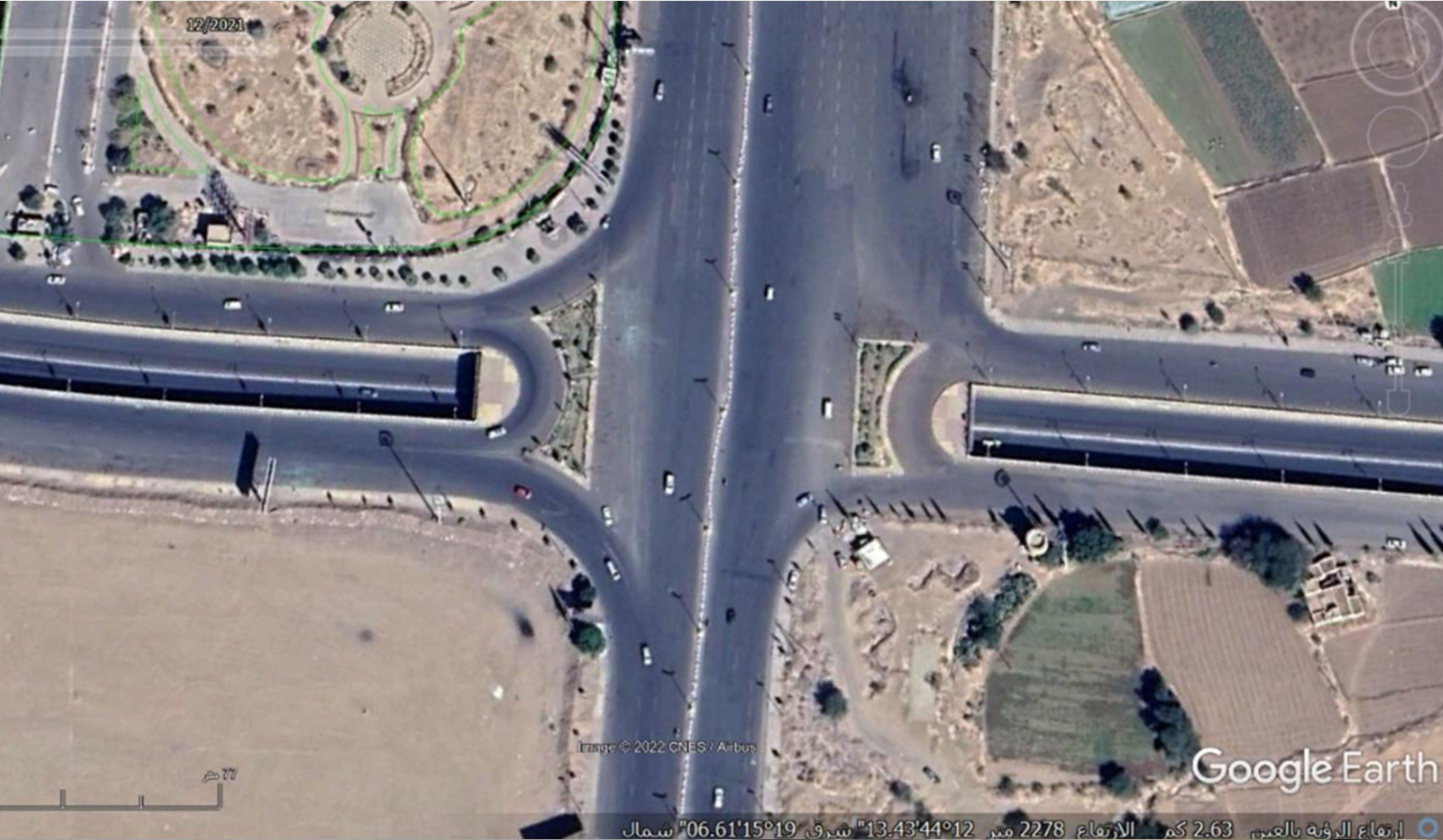 Archival satellite images from Google Earth, before and after the bombing, showing the air strike crater in the tunnel

Hours after the bombing, the Coalition stated that the air strikes on Sanaa were in response to a drone launched by the Houthis towards the Saudi city of Jazan. The Coalition targeted the Central Security Camp and other locations near Al Sabeen tunnel. Saudi 24 anchor Mamdouh Al Rafeed posted a tweet in which he said that the news indicated that the convoy of the leader of the Houthi group, Mahdi Al-Mashat, had been targeted in the tunnel.

A screenshot of tweets by Al-Hadath Al-Yemeni, which is affiliated with Al-Hadath satellite channel

A screenshot of Mamdouh Al Rafeed, the anchor in Saudi 24 TV

We found a piece of ammunition remnants used in the bombing that appeared for only three seconds in Al Masirah Mubasher videor on Telegram, but it does not contain any features that would enable us to accurately determine the type of ammunition.

A screenshot from Al Masirah Mubasher video in Telegram

The bombing caused partial damage to the main road, creating a hole in the road after the roof of the underground tunnel was breached. One of the concrete pillars supporting the roof, as well as the electrical system for lighting the tunnel near the explosion were damaged

A screenshot from Ansar Allah Media Center video on YouTube

A screenshot from Al Masirah TV video on Telegram

No civilian casualties were reported.

The damaged tunnel did cause a sharp traffic jam, as there are multiple options for vehicles to travel on the asphalt road, as well as one of the tunnel lines. The traffic stopped in the other line until the debris was removed. A video posted by Abu Al-Regal YouTube shows civilian vehicles traveling on the line to the site of the projectile shortly after the strike, which makes it the most serious direct threat on civilians caused by the attack.

A screenshot from Al Masirah TV video on Telegram 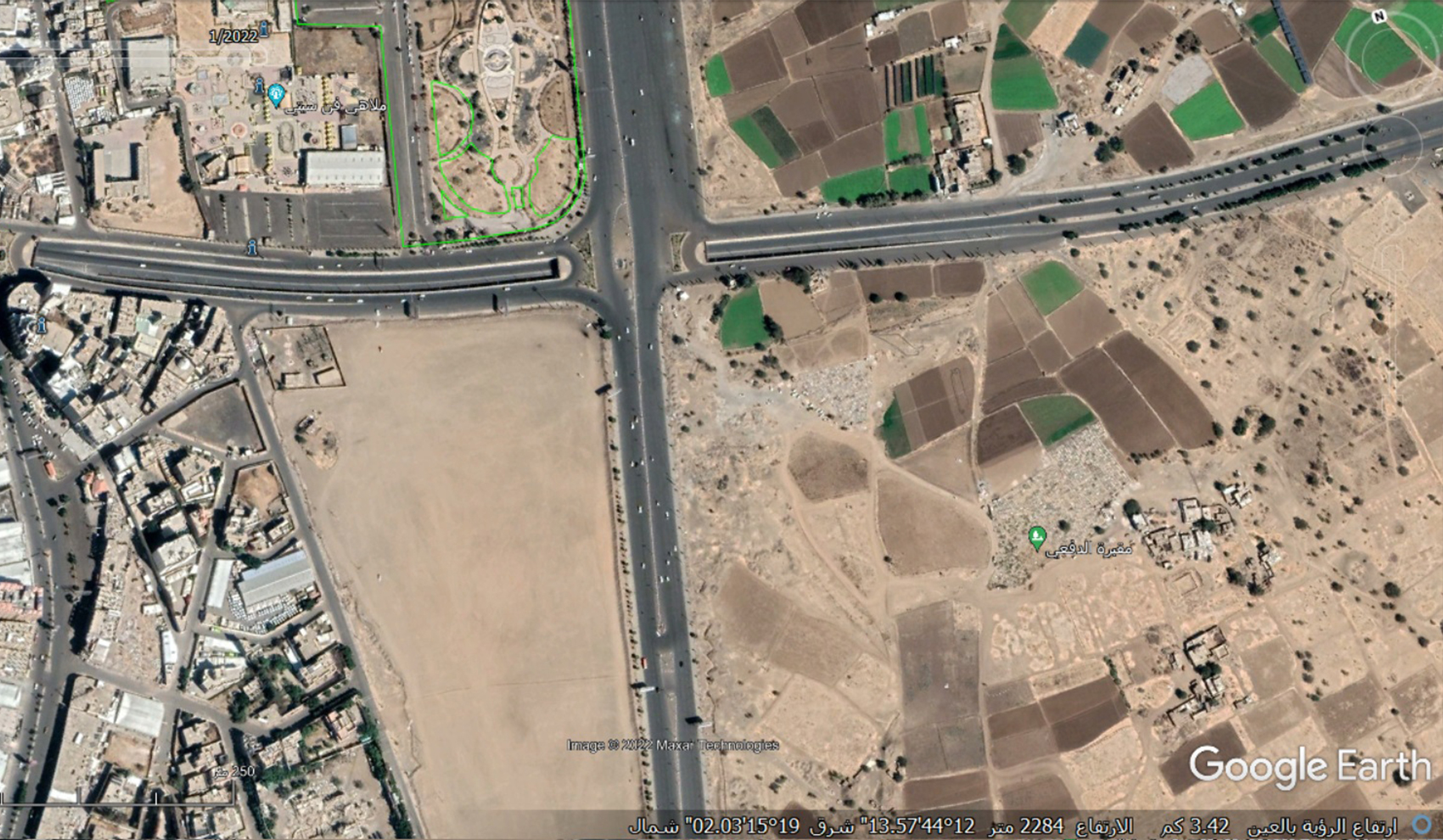 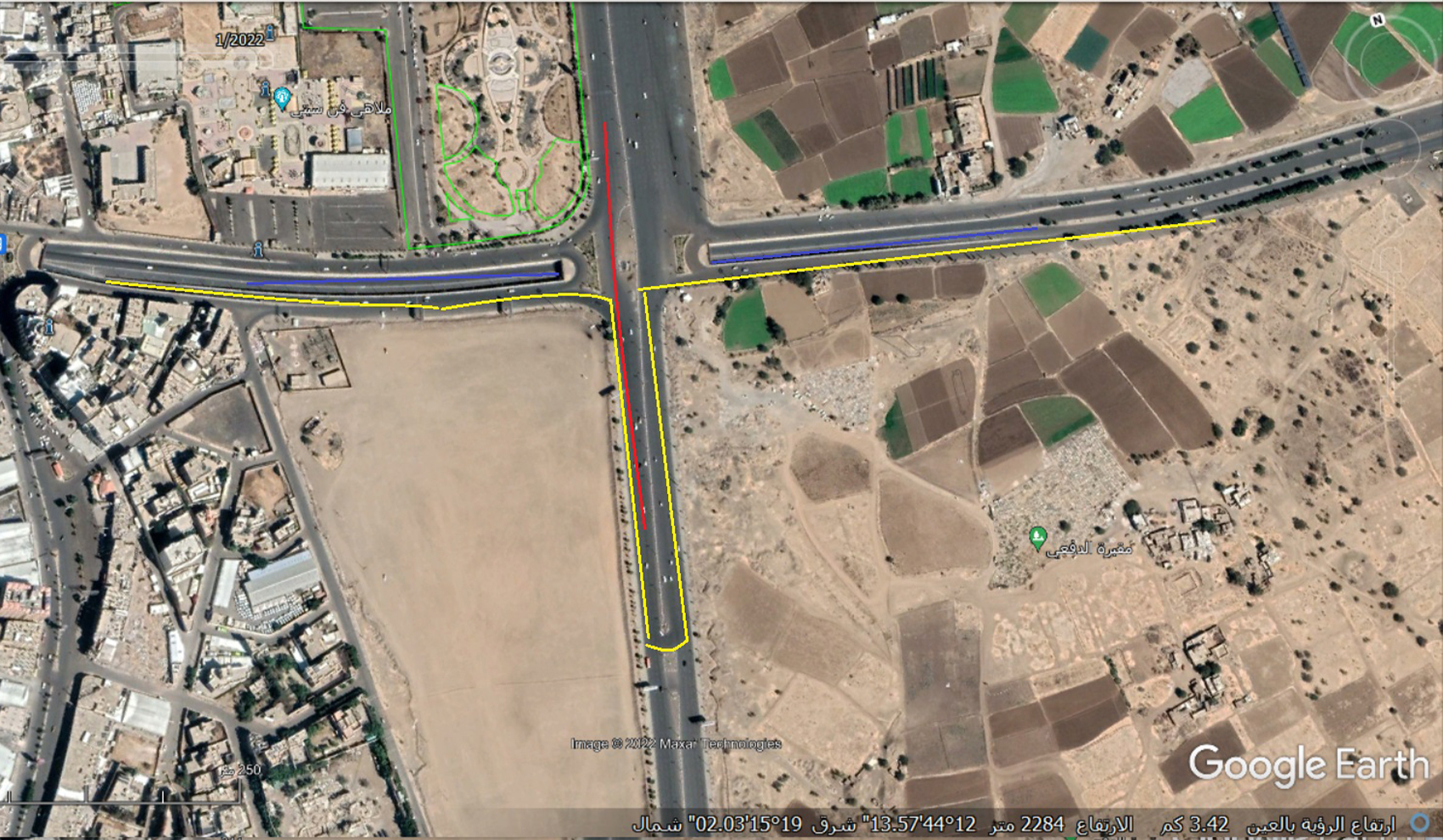 A satellite image from Google Earth of the location of damaged tunnel and the impact on civilian vehicle traffic. The road to Al Sabeen Square (red). The yellow line is the alternate route to the tunnel before removing the rubble. 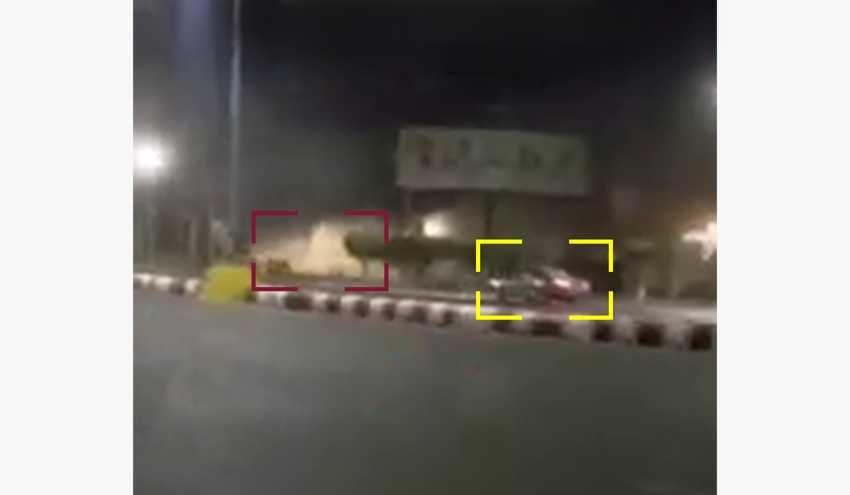 A screenshot from Abu Al-Regal YouTube video, showing a vehicle driving towards the damaged site moments after the tunnel was bombed (vehicle is in yellow- the smoke of the projectile is in red)

Yemeni Archive concluded that the Saudi led Coalition aircraft dropped a projectile on a tunnel at the intersection of Al Sabeen Square and Al Sitteen Street in the Al-Sabeen District, south of the capital Sanaa, after midnight on 23 December 2021. The projectile caused partial damage the tunnel and the main road to Al Sabeen Square. No civilian casualties were reported.