Al-Mazraq camp is located in the Al-Mazraq area: next to the Al-Mazraq market in Haradh district of Hajjah governorate. It was established in 2009 by the United Nations to accommodate civilians displaced from areas of conflict in the Sa’dah governorate due to the many attacks taking place in the area. The camp houses roughly 12,500 displaced people, mostly women and children. At the end of March 2015, and due to the escalation of the situation in the north - especially in Sa’dah governorate as a result of multiple incidents between the Houthis and the government many families (roughly 500) fled the area and arrived at Al Mazraq Camp. 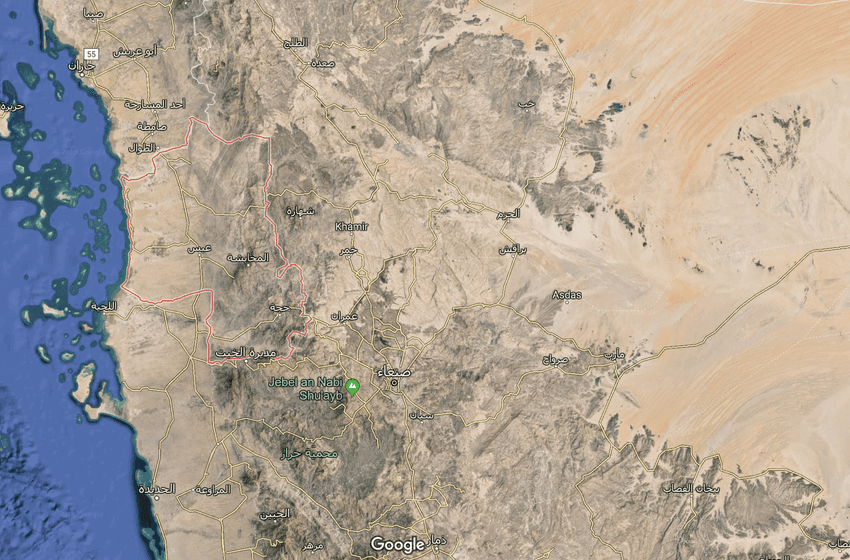 On 30 March 30 2015 after 11:00 Yemen time, several news networks and activist pages 1, 2, 3, 4, 5 reported that Saudi airstrikes targeted the main gate of al-Mazraq 1 camp and the room where IDPs were registered, resulting in deaths and injuries among the displaced persons who were gathering at the gate. 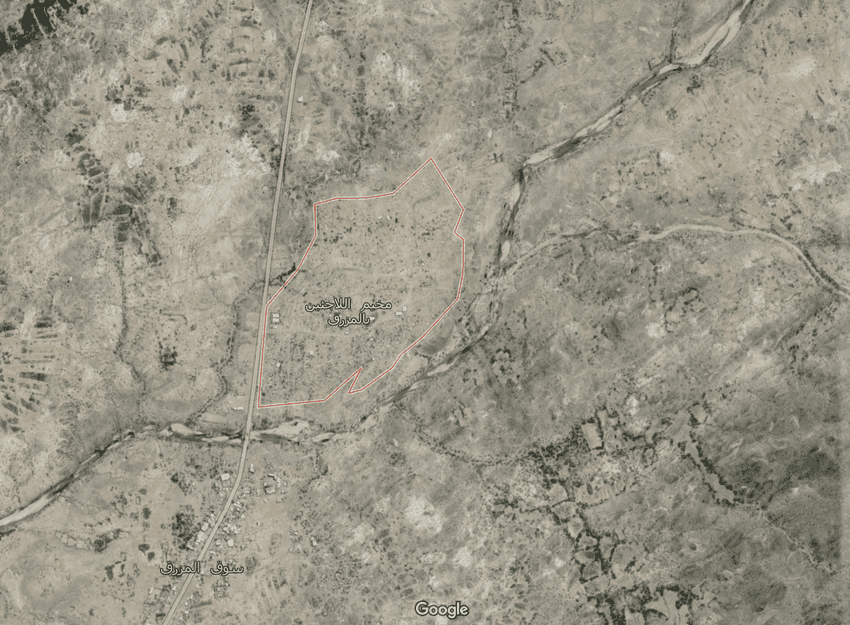 That same day, the Yemen Today TV channel published pictures on Facebook showing individuals killed as a result of the airstrikes on the Al-Mazraq camp.

Doctors Without Borders also published a statement on its Facebook page that same day indicating that its medical staff had provided treatment for more than 30 individuals injured as a result of the airstrikes, and had seen more than 29 others who were dead on arrival.

On 31 March 2015, Yemen Today TV channel published a video report on the targeting of Al-Mazraq IDP camp by Saudi air strikes on their YouTube page. The report indicated that the airstrikes took place on Monday (30 March) and resulted in dozens of individuals being killed or injured, among them women and children. The video also includes footage recorded from a car which was driving toward the impact site. Destroyed buildings and those killed can be seen on the road, alongside footage appearing to have been filmed at a medical centre showing the people that are being treated as a result of the airstrike. 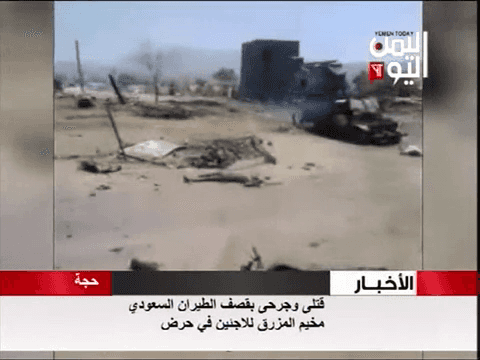 In the same video at 0:49, another witness stated: “The Saudi air force flew over, then launched the first air strike here at the gate of the camp, resulting in more than 50 killed people. Women and children fled. Some people were killed while others fled. The aviation flew again and hit AL-Mazraq bridge here, and hit two cars of unarmed civilians who were passing through looking for their livelihood.

Another witness testified at 1:50 in the same report: “Now we are all displaced in Wadi Haradh, our children are lying on the ground, some of us are killed, and we are still looking for them, we have found them neither in mortuary nor in the same cemetery where they were buried by the aviation. Where can we go? There is no power or strength save in Allah, this coalition has no right, and we have no power to be fought for no reason, we are civilians.”

When did it happen?

News networks and activist pages started reporting on the attack on 30 March 2015, after 11:00 am Yemen local time. At 11:22 am, Ahmed Obeid Sa’dah published a post on his Facebook page describing the targeting Al-Mazraq IDP camp by Saudi aircraft.

On 4 April 2015, the Legal Center for Rights and Development published a report on the Al-Mazraq camp attack, in which many testimonies state that the airstrikes took place around 11:00 am on 30 March 2015, including the testimony of one of those injured, Mohammed Shua’i Jamil Amina. In his statement, he said that shelling of Al-Mazraq camp started at about 11:00 by an airstrike on the gate of the camp, “Muhammad fled with the displaced people from the camp next to the bridge on the main road, then another airstrike took a place and Mohammad escaped with the others toward a hotel, where they were attacked again. Mohammad’s right leg was injured and amputated, and he also received many wounds to his body.“

To verify the time and location of the published videos and images, Al-Mazraq weather analysis was conducted on 30 March 2015 between 12:00 and 22:00 Yemen local time, using the WolframAlpha tool. The weather specified by the tool is consistent with the weather in videos and photos posted via social media related to the incident, reinforcing what has been reported. Below is a screenshot of the WolframAlpha analysis: 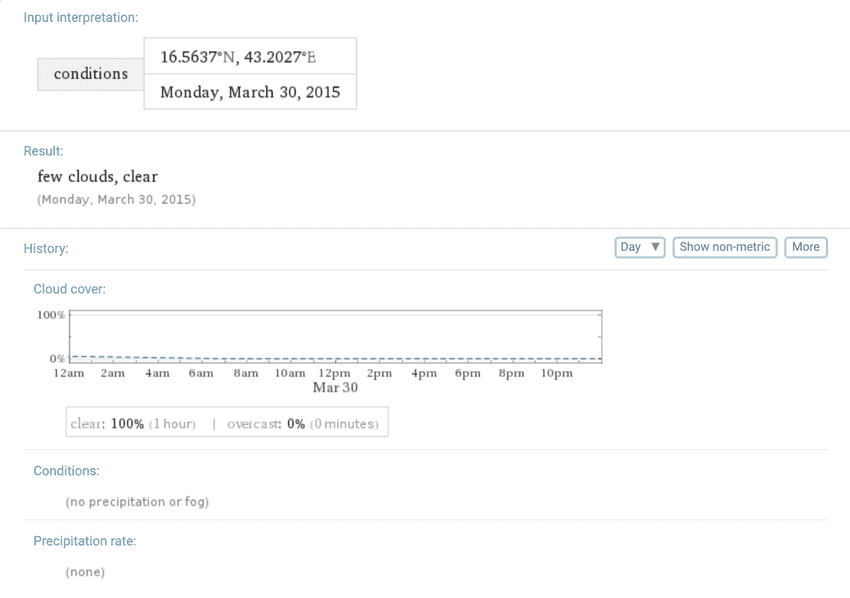 Where did it happen?

To determine the exact targeted location, Yemeni Archive identified the landmarks in the incident-related visual documentation, and matched them with satellite images taken to the Al-Mazraq area.

Below is a picture that was published by several news networks showing transferring of victims’ bodies by Red Crescent paramedics in front of the camp gate. In the background, two buildings used as landmarks have been marked in green and yellow, as well as a nearby mosque minaret which has been marked in red. 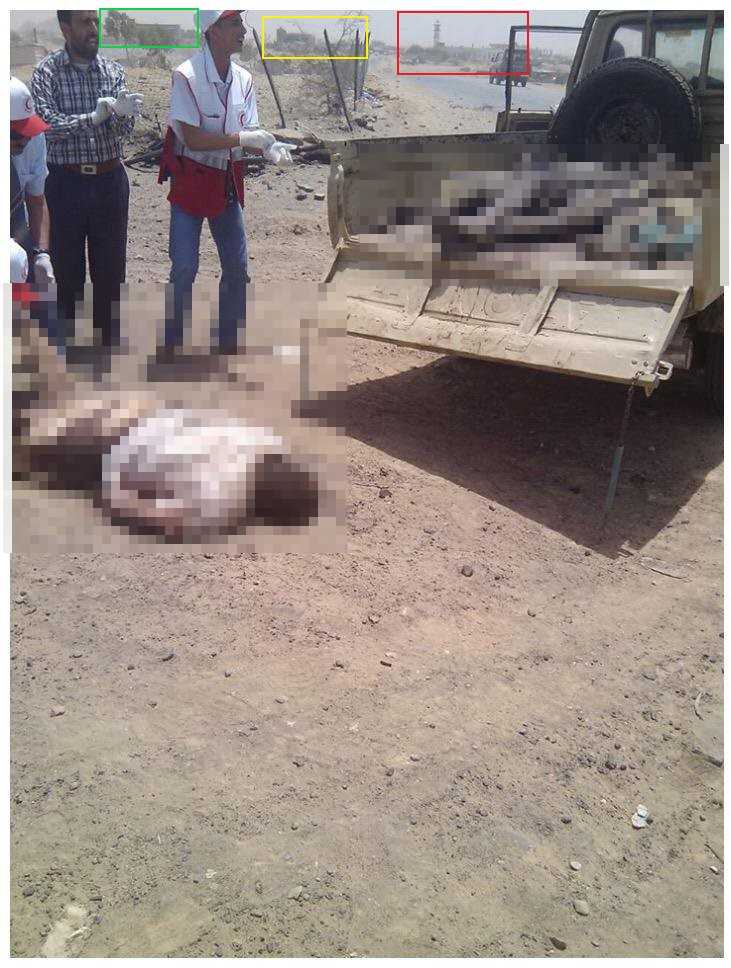 Photo published on social media of a group of Red Crescent paramedics transferring victims’ bodies from the camp gate. The picture contains many landmarks of the area, Source: Yasser Al Awar 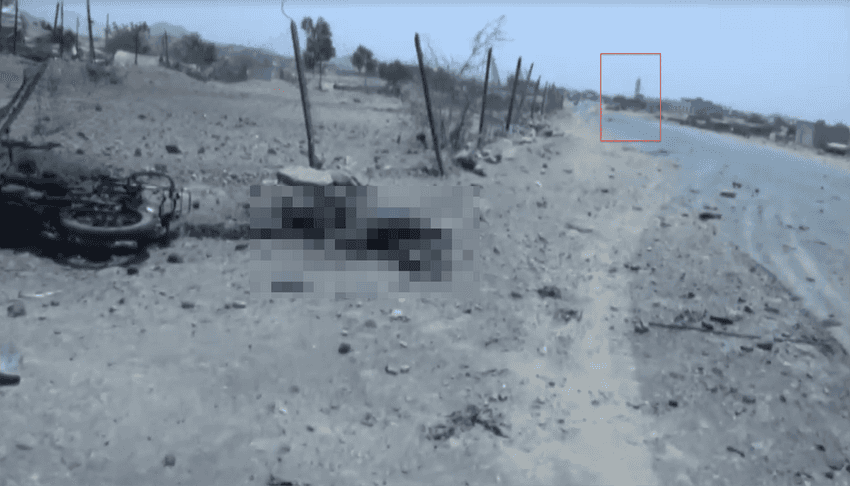 Footage from a video published on the NCTP YouTube channel shows the body of an individual killed at the entrance to the camp gate. The minaret, one of the identified landmarks, can be seen in the background.

In the video published by Yemen Today, the same identified landmarks are observed. After analysis, it was ascertained that the footage below was taken from inside Al-Mazrak Camp No. 1, where the tents of the displaced people and the marked landmarks can be seen, matching features observed in the satellite images. Yemeni Archive evaluated the location of the camera as well as the direction of the photographer (towards the impact site) using Google Earth. 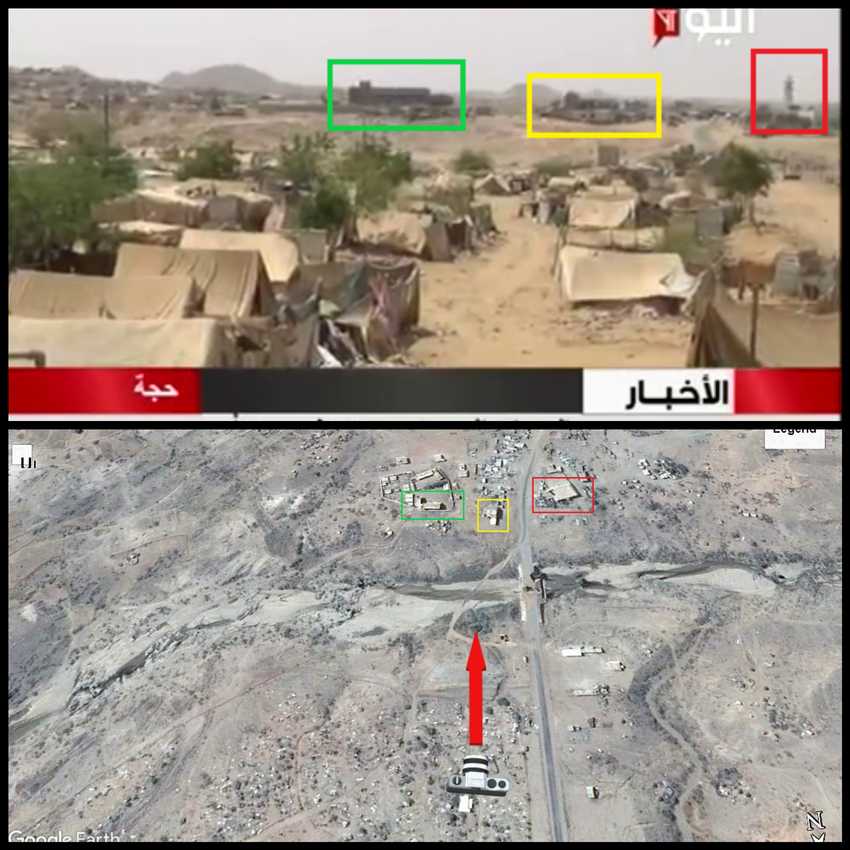 Footage inside the camp from Yemen Today’s report on YouTube

In the same report, Yemeni Archive was able to confirm that the following footage was recorded from above the Al-Mazraq Road bridge, which is very close to the camp. The location of the camera and the direction of the photographer ware determined using Google Earth. 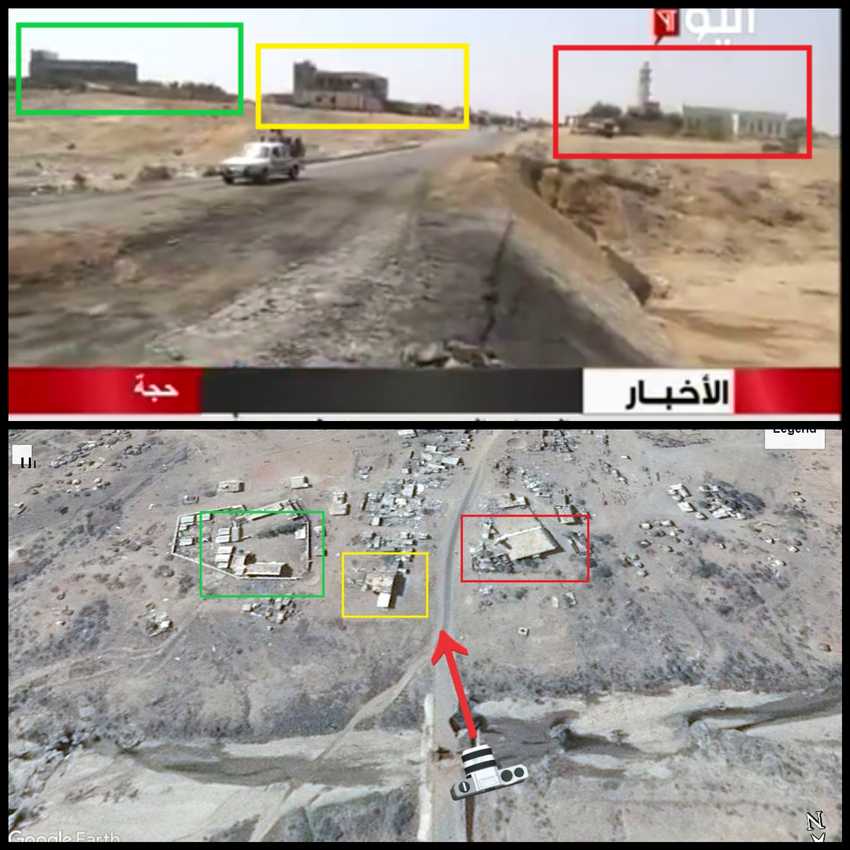 According to reports published about the incident, witnesses statements, and after matching the landmarks appeared in the incident-related visual documents and satellite images, Yemeni Archive was able to determine the exact targeted location - the main gate of the Al-Marzaq camp no.1, as well as the guard and registration room of the camp administration. This location is bordered on the north by an International Health Organization (WHO) clinic. 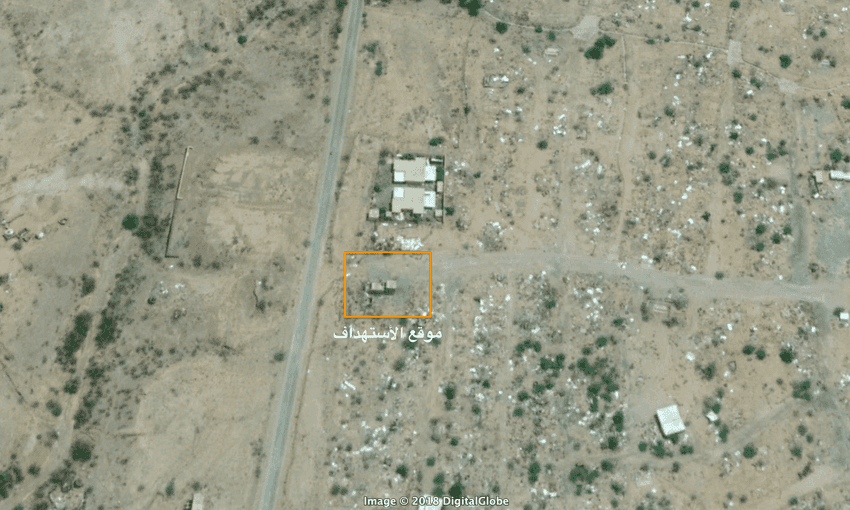 Damage and injuries caused by the attack

Save the Children said in its 2 April 2015 press release that more than 29 displaced people, including 11 women and 14 children, were killed in the attack on the Al-Mazraq camp in Haradh.

The Legal Center for Rights and Development published a report documenting the names and photos of the Al-Mazraq IDP camp’s victims. The organisation reported that the number of casualties identified by the name was 42. It also indicated that some of the medical equipment of the clinic was damaged, and that cars and motorcycles of civilians nearby were burned, which can be observed in the published videos.

Names of the civilians killed due to targeting Al-Mazraq camp

The following is a list of names of the civilians that has been killed as a result of this attack, according to the report of the Legal Center for Rights and Development:

To assess the structural damage in the camp, Google Earth’s historical imagery was searched for photographs of the targeted area before and after the incident. The closest photos to the attack date in Google Earth were on 18 September 2013 (before the air strike) and 29 January 2016 (after), where the camp gate and the administration building of the camp appear in both pictures. By comparing these two images, the destruction caused by the attack in the area can be observed. 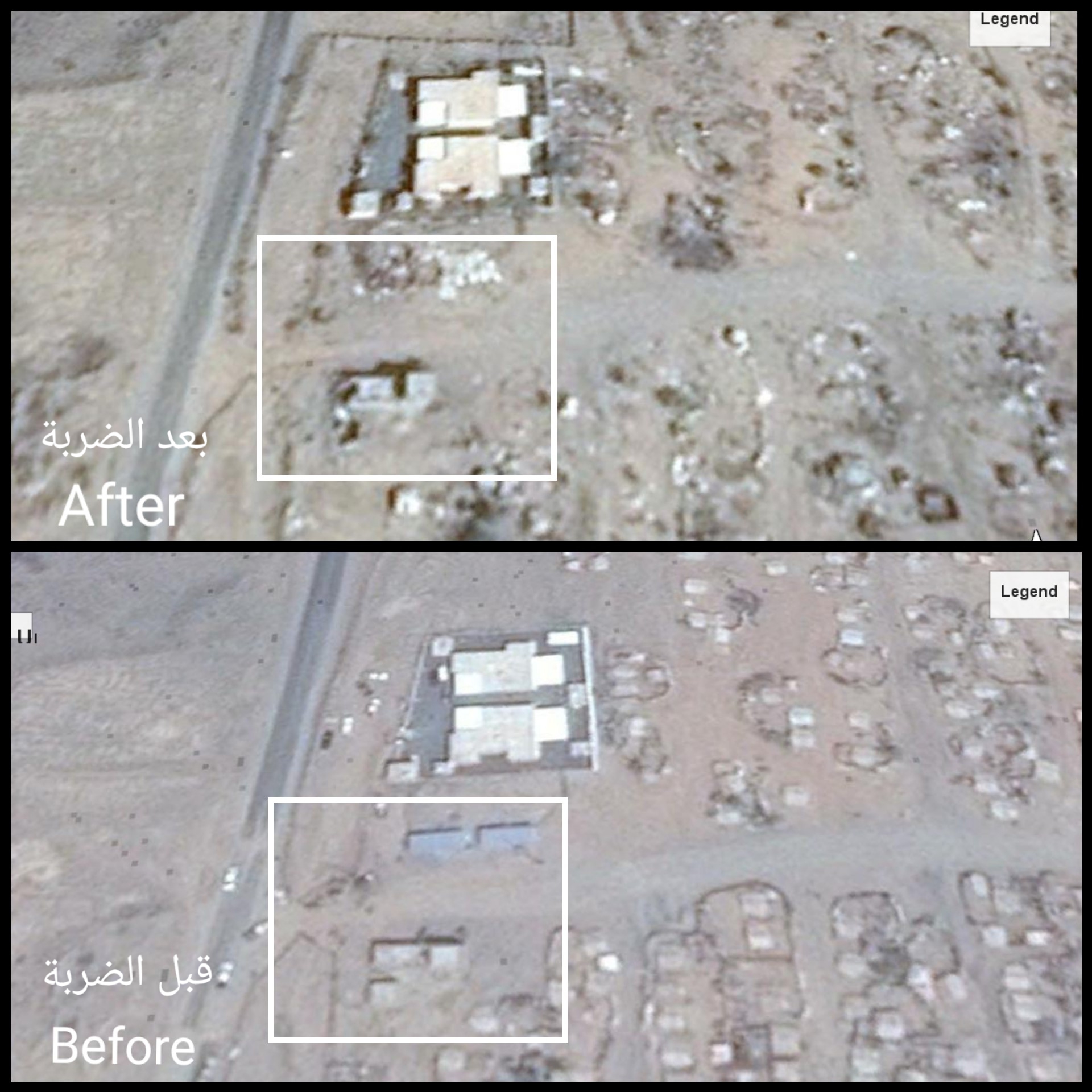 The gate, and the guard and registration building in Al-Mazraq camp before and after the airstrike. The first picture was taken after the strike on 29 January 2016, the second was taken before the attack on 18 September 2013, Source: Google Earth

Footage showing the destruction of the registration room as a result of the strike that targeted Al-Mazraq camp, Source: Yemen Today's Report on YouTube 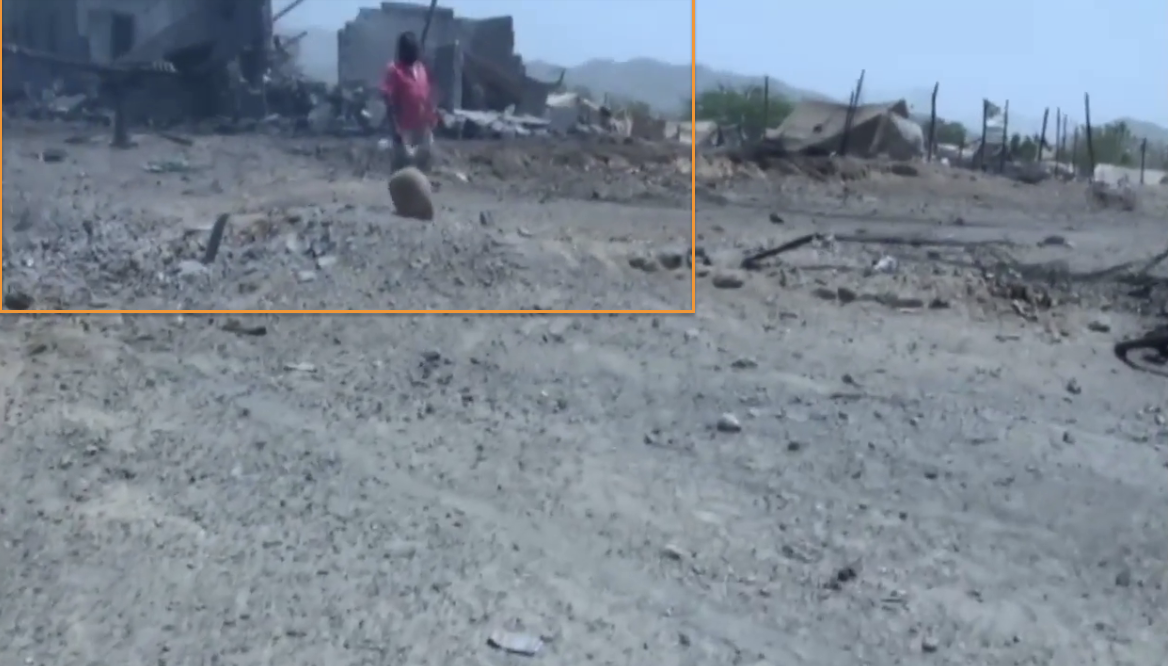 Below are two images from videos published by two different sources. They both show the same landmarks that were targeted. 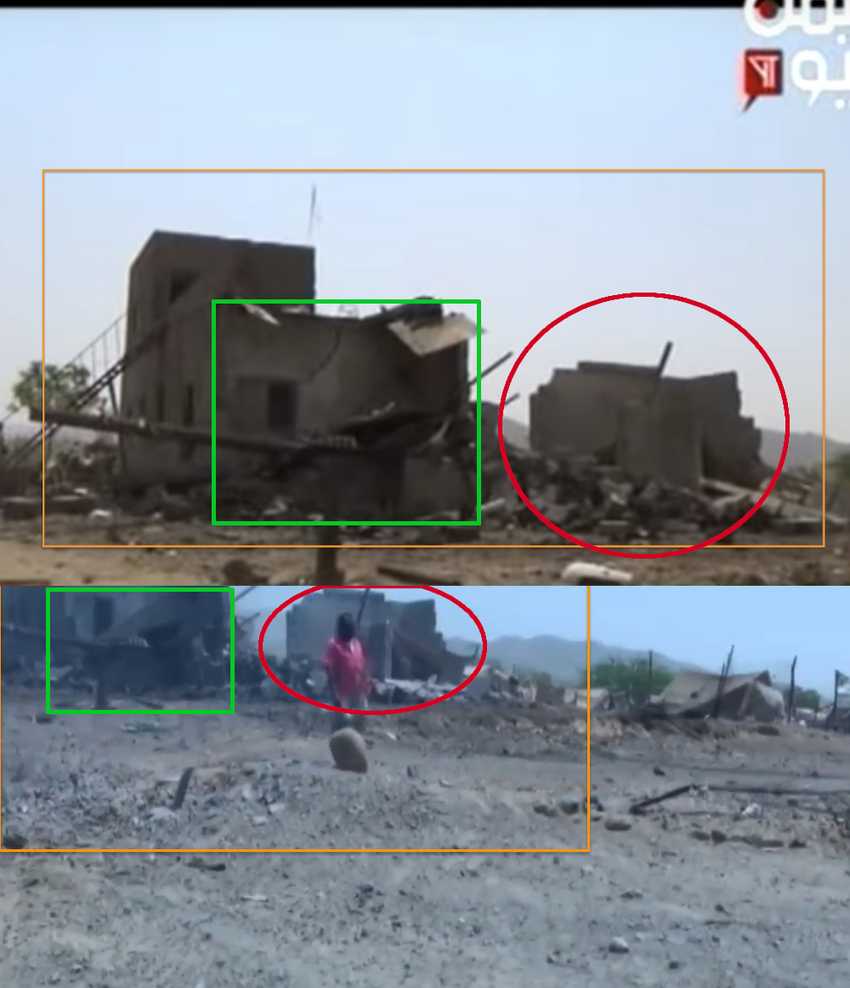 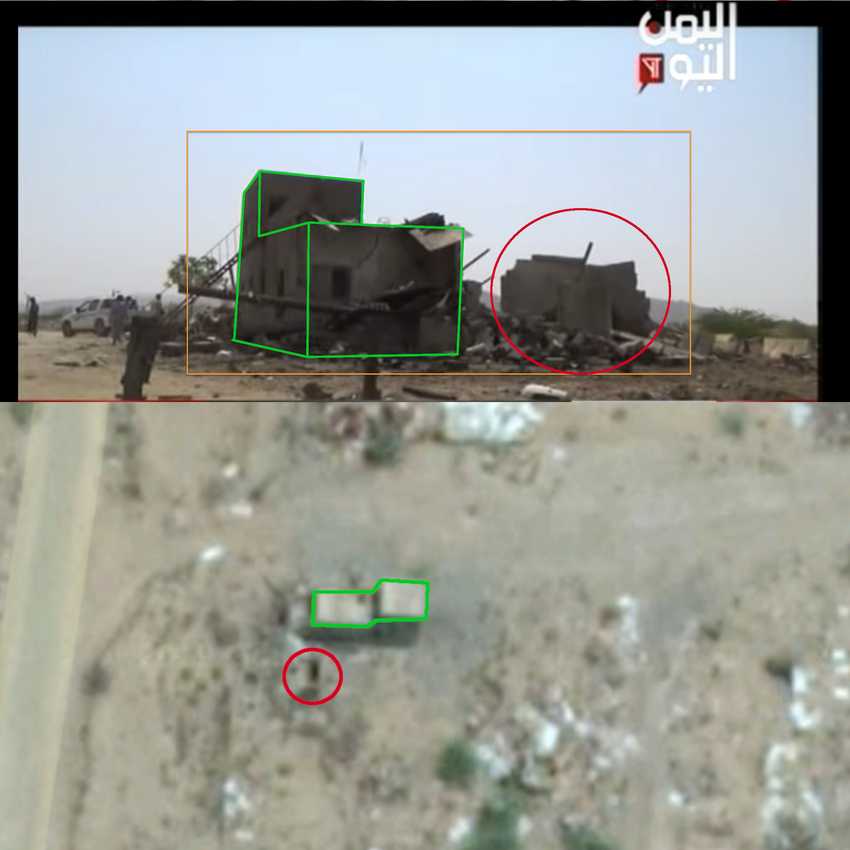 Statements of different parties about the incident

In a press conference held on 1 April 2015, Major General Ahmad Asiri, spokesperson for the coalition forces, denied that the coalition was responsible for targeting the camp. He confirmed the coalition’s knowledge of both civilian and military locaitons. Al-Asiri blamed the attack on mortar shelling by the al-Houthi group.

In an interview with Al-Hadath TV channel, the Yemeni government, represented by the then Yemeni Foreign Minister Dr. Riyad Yassin, also denied the responsibility of the coalition for the attack. Instead, it blamed the targeting the camp on al-Houthis.

In turn, The al-Houthi group and the forces loyal to former President Ali Abdullah Saleh, through their official channels, accused the coalition of targeting civilians in the Al-Mazraq camp.

The United Nations High Commissioner for Human Rights said in its report on 7 September 2015 that the information gathered by OHCHR indicated that on 30 March 2015, the coalition forces launched a number of air strikes that hit the Al-Mazraq IDP camp, resulting in many killed and injured civilians, and that the information provided to OHCHR did not identify the presence of any military objectives in that area.

The response to the UN report, which condemned the coalition of targeting al-Mazraq camp, was made by Mansur al-Mansur, head of the Coalition Accident Assessment Committee in Yemen, at a press conference held in Riyadh on 23 February 2017. He said that Al-Mazraq was an area prohibited from being targeted by coalition forces, and that based on the intelligence of the coalition forces, there is no military activity in the camp. Al-Mansour pointed out that at the time, coalition forces targeted a gathering and observation point belonging to the Houthis in Jabal Haidan, overlooking the Saudi city of Khouba (35 kilometers away from the Al-Mazraq camp). He additionally attached a satellite image of the mountain site, which Mansour said was targeted at the same time of the camp attack.

Image used by coalition leadership to deny its targeting of the Al-Mazraq camp, 23 February 2017

According to the analysed evidence and sources, several air strikes targeted the main gate of the Al-Mazraq camp and the registration room between 11:00 am and 11:30 am on March 30th, 2015, resulting in 29 killed and 42 injured, including women and children. Camp buildings, the nearby medical clinic, and civilian properties were additionally destroyed.

Coalition forces and Houthis have accused each other of responsibility for targeting the camp. Several reports have indicated Coalition forces’ responsibility for targeting, including one by the UN High Commissioner for Human Rights. Despite Yemeni Archive not finding open source content indicating the forces allegedly responsible for the attack, the coalition led airstrikes and destroying of Houthi controlled airports and aircrafts several days earlier strongly indicates that coalition forces are responsible for the attack.

This investigation was supported through the MENA-Investigative Fund