The attack on Al-Masafah in the Al-Jawf province

The attack on Al-Masafah in the Al-Jawf province

On July 15, 2020 at 6:30 in the morning local time, three airstrikes carried out by the Saudi-led coalition hit a residential area in the Al-Masafah region of the Al-Hazm district in the Al-Jawf province in northern Yemen. The attack killed ten civilians and injured four others, mostly women and children.

Yemeni Archive gathered, verified, and analysed open source visual content, geolocating the attack and confirming the time of the strike, as well as collected testimonies through field interviews with witnesses to investigate this attack. Yemeni Archive used social media posts, satellite imagery, and a shadow calculator tool to determine the exact location and time of the attack.

The Al-Masafah area is located about fifty kilometers east of the center of the Al-Hazm district in the Al-Jawf governorate in northern Yemen. It’s a small desert town with a small number of residents. There are no more than 40 houses in Al Masafah. Satellite images show the small town, which the local tribe refers to as Al-Marazeeq. 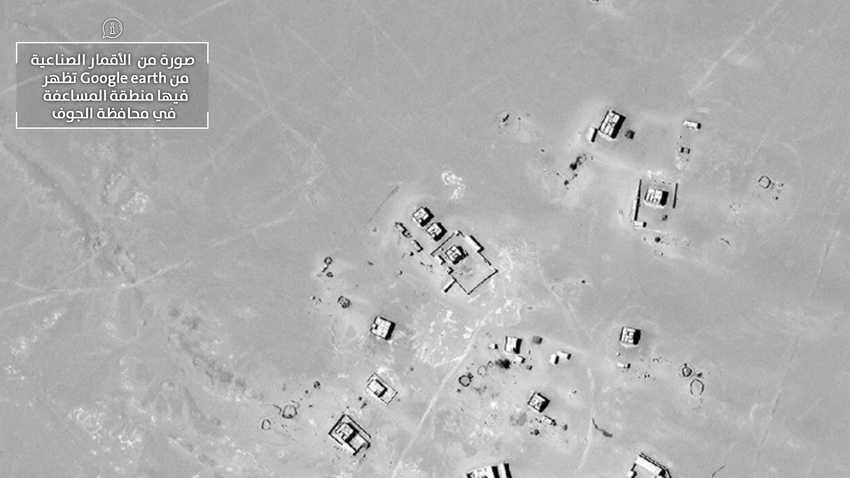 The region was under the control of the recognized Yemeni government forces beginning in 2014 and until early March 2020 when the “Ansar Allah” Houthi group, after several long military battles, took control of most of the vital areas in the Al-Jawf Governorate. These areas include the Al-Hazm Directorate, which It is located in the area of Al-Masafah. An image from the Middle East Wars Map Twitter account shows the Al-Masafah Area as now close to the frontlines. 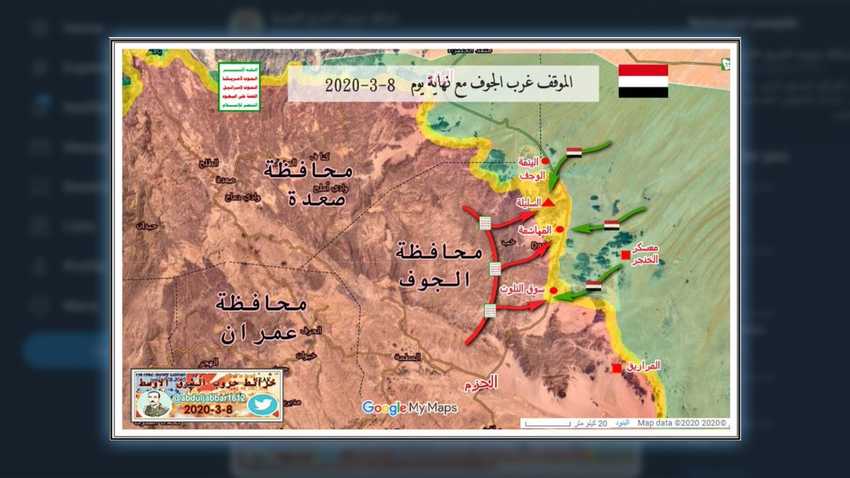 After analyzing open source content from multiple sources that feature similar landmarks and matching them with satellite images, Yemeni Archive found that the attack hit two houses in the Al-Masafah area of the Al-Hazm district in the Al-Jawf province. The coordinates of the first house are (15.988599 45.200613) and the coordinates of the second house are (15.989, 04545.202087). The distance between them is approximately 200 meters. 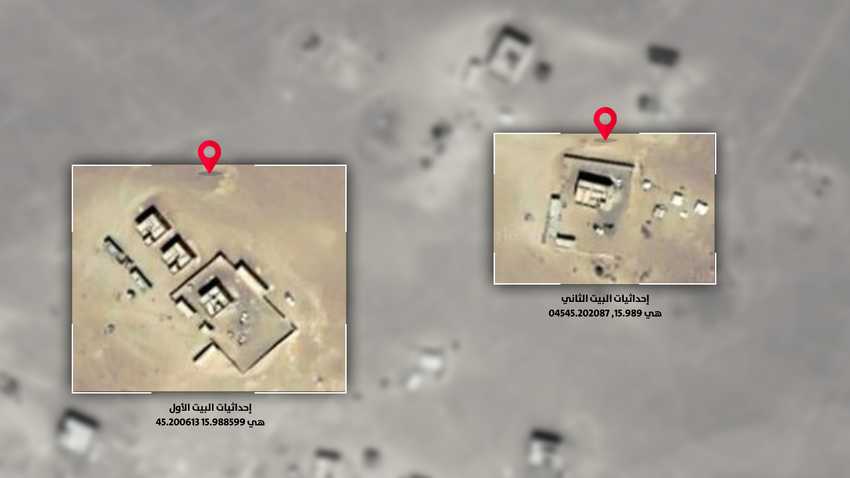 Determine the timing of the attack

The witness testimonies featured in open source content match in determining the time of the attack. At 01:05 minutes in a video on “Yemen Satellite Channel ” published on YouTube, “Naji Mabkhout,” one of the families of the victims, details that the attack took place between 06:30am and 07:00am local time. Another person who appeared in the Alaraby TV report at 00:30 seconds, mentions that the bombing of the Al-Masafah area occurred at 06:30 am local time. This information is additionally supported by an infographic, issued by the Statistics and Information Department of the Ministry of Public Health and Population and posted by the “Ahmed Jahaf” account on Twitter, showing statistics of those injured and killed in the attack. 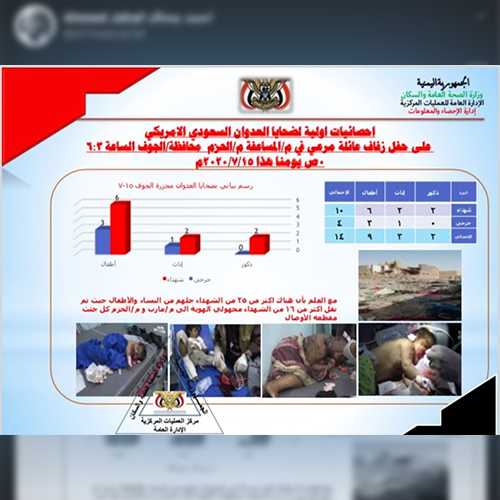 News related to the attack

Several social media accounts, news sites, and news networks circulated posts, photos, and videos showing the civilian victims, mostly women and children, as well as the destruction of some houses. These publications indicated that, on the morning of July 15 of this year, the Saudi-led coalition air force carried out an attack hitting a gathering in one of the houses in the Al Masafah area of the Al-Hazm district in the Al-Jawf province. The attack targeted a child’s circumcision ceremony and killed and injured a number of civilians.

The first reports of the attack was published at 10:13 am local time by “Saleh Hizam Al-Nofi’s” account on Facebook where the post indicated that coalition aircraft targeted civilian homes in the Al-Marazeeq area (Al Masafah) in the Al-Jawf Governorate. The post mentioned that women and children were among the victims injured in the attack. 15 minutes after this initial post, the Masirah TV Twitter account tweeted about the attack.

More news began circulating about the incident, Sabaa News Agency (which is affiliated with the Sanaa government) published on its official page about the incident with pictures of the victims. The Anatolia News Agency and Sputnik News Agency also published news related to the attack. Several News channels including Yemen Shabab TV, Al Mahriah TV, Yemen TV, Al Araby TV, Belqees TV and the Syrian TV mentioned the attack in their TV reports and broadcasts. 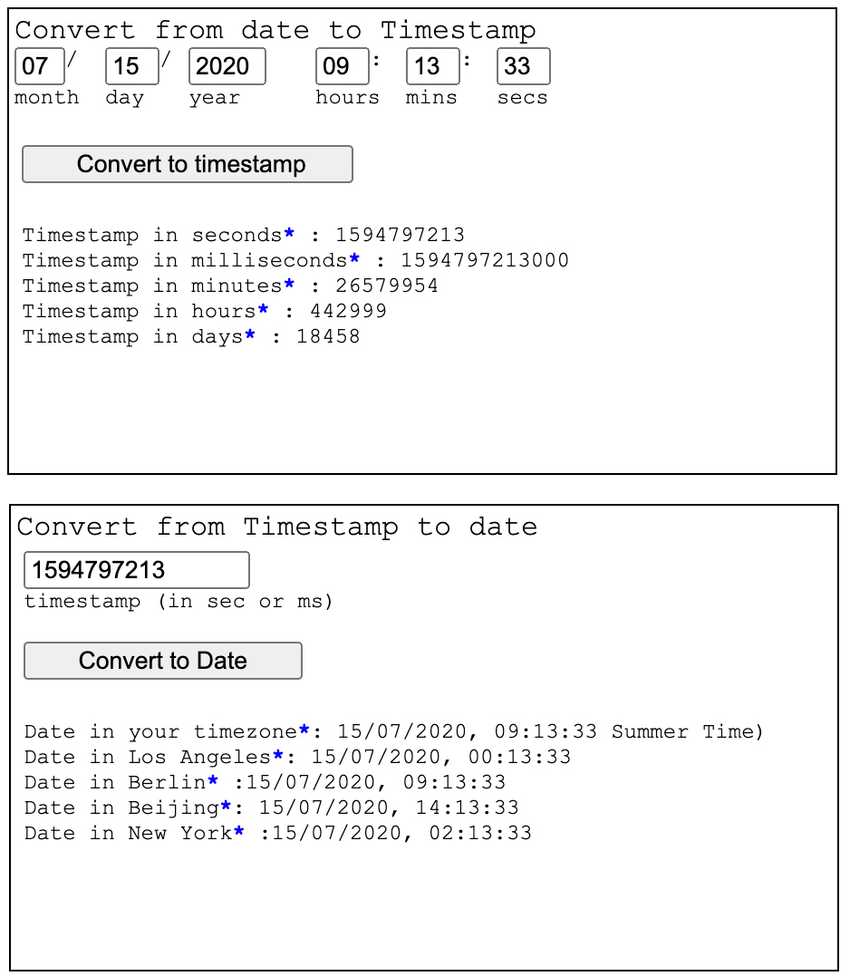 On the same day about 50 minutes after his first post on Facebook regarding the attack, “Salih Nizam al-Nofi” posted a video showing one of the houses targeted and destroyed in the attack.

By analyzing the shadows featured in this video taken on the  day of the incident using the shadow calculator, Yemeni Archive was able to confirm that the video was taken at 10:30 am local time on July 15, 2020, about 30 min before it was published on Facebook and hours after the strike.

The first house appears as inhabited by civilians in many of the videos and pictures showing the aftermath of the attack. It is frequently featured in media covering the attack such as in the video posted by Saleh Huzam Al-Nofi’s on Facebook, Russia Today’s channel report, Al Masirah TV and Houthi group media center on YouTube and other reports and photos. The second house appears for a minute and five seconds at the beginning of another video by Houthi group media center on YouTube, the speaker in the video remarks that the second house was hit with two airstrikes leading to its complete destruction.

In the following pictures, Yemeni Archive compared documentation taken by a field team of  the first house marked in the red square, with video reports posted on social media by Russia Today TV and Al Masirah TV on YouTube with aerial footage from a Houthi Group Media Center, a panoramic photo created from a video posted by “Saleh Hizam Al-Nofi”, and satellite imagery.

The comparison confirms and matches landmarks visible from the front and to the right of the first house, a number of buildings of different sizes. 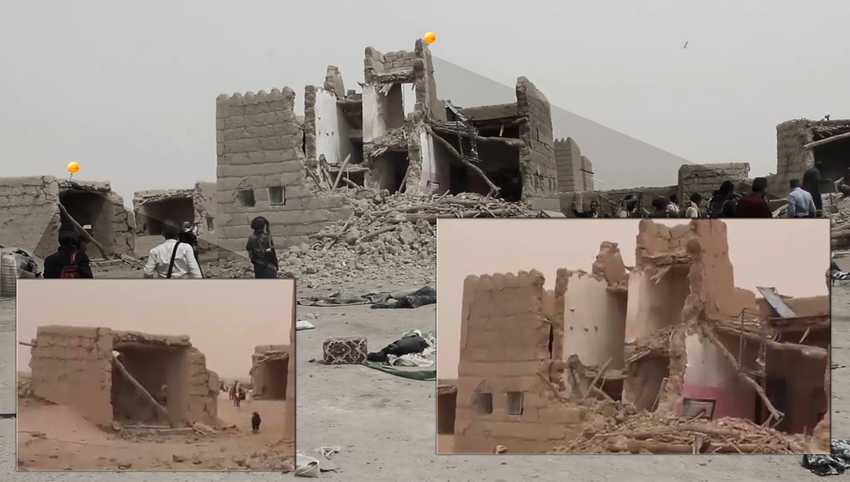 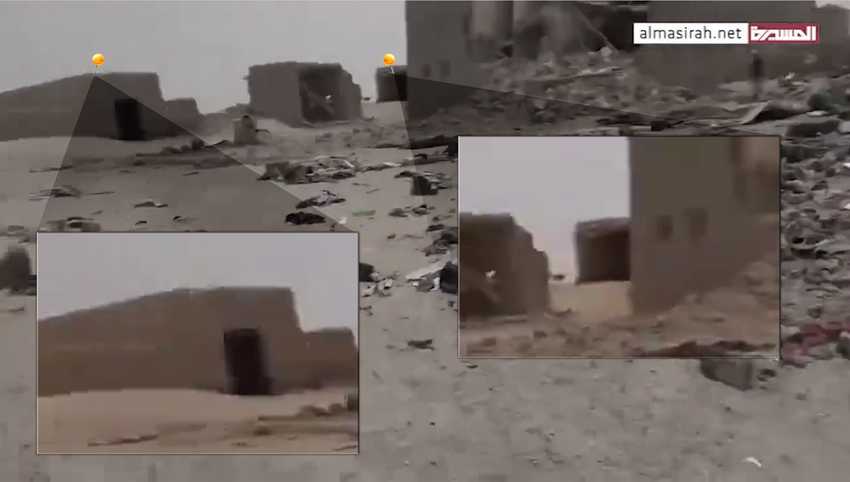 Additionally, buildings located behind the houses targeted in the attack can be seen in online footage and media taken by the field team featured in the images below. 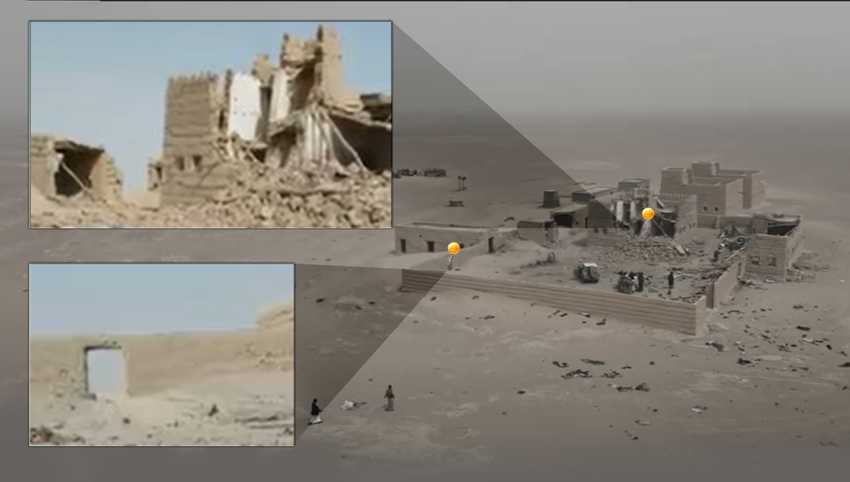 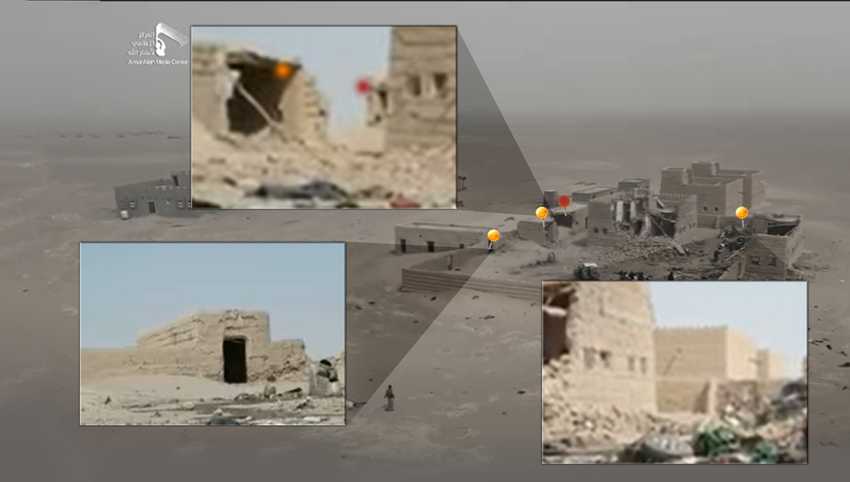 To the north of the first house marked in the blue square, there is another house that was almost completely destroyed in the attack.t’s shown in the documentation by the Yemeni Archive. It also appears in the video reports by Russia Today and Al Masirah TV. 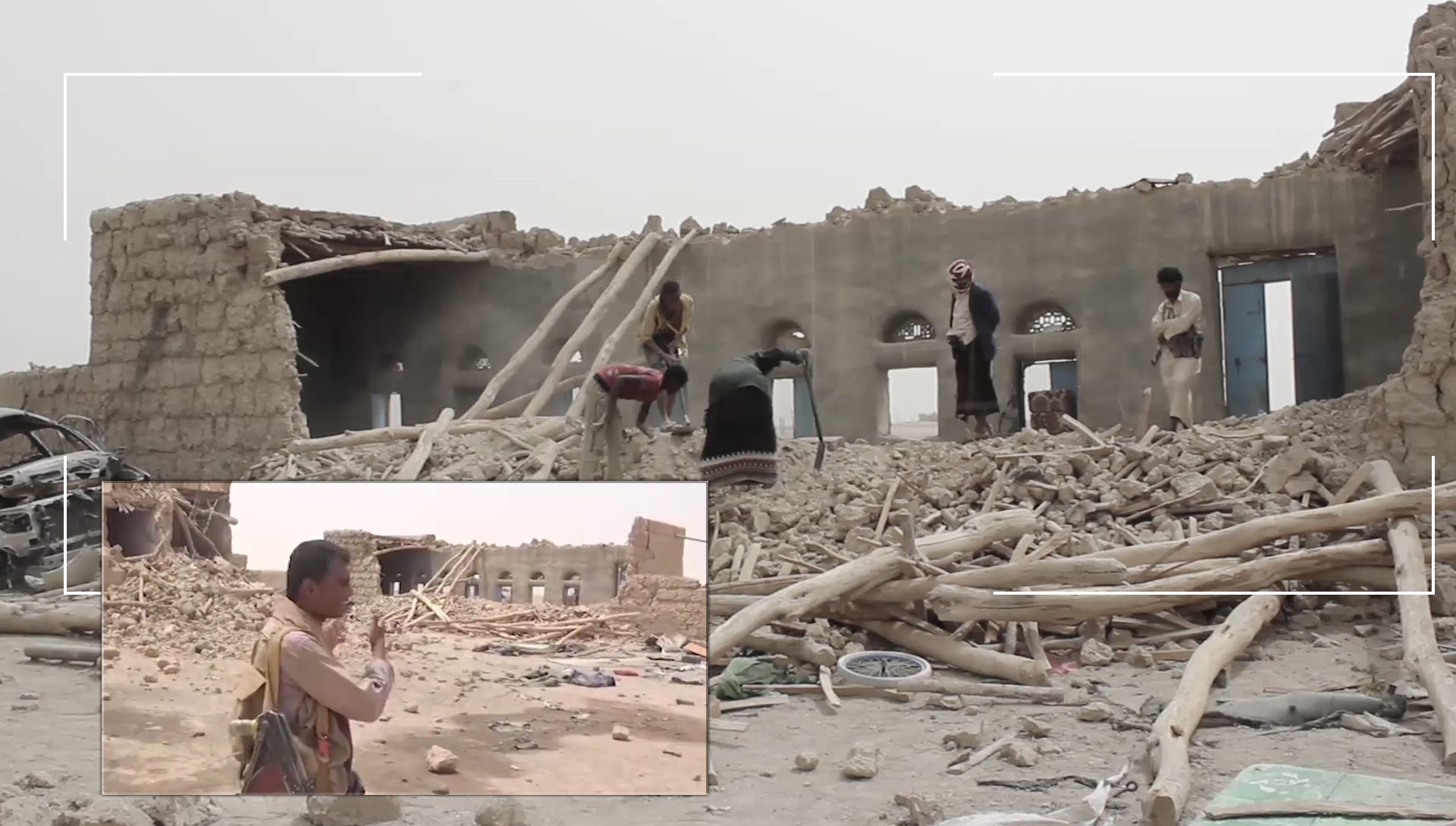 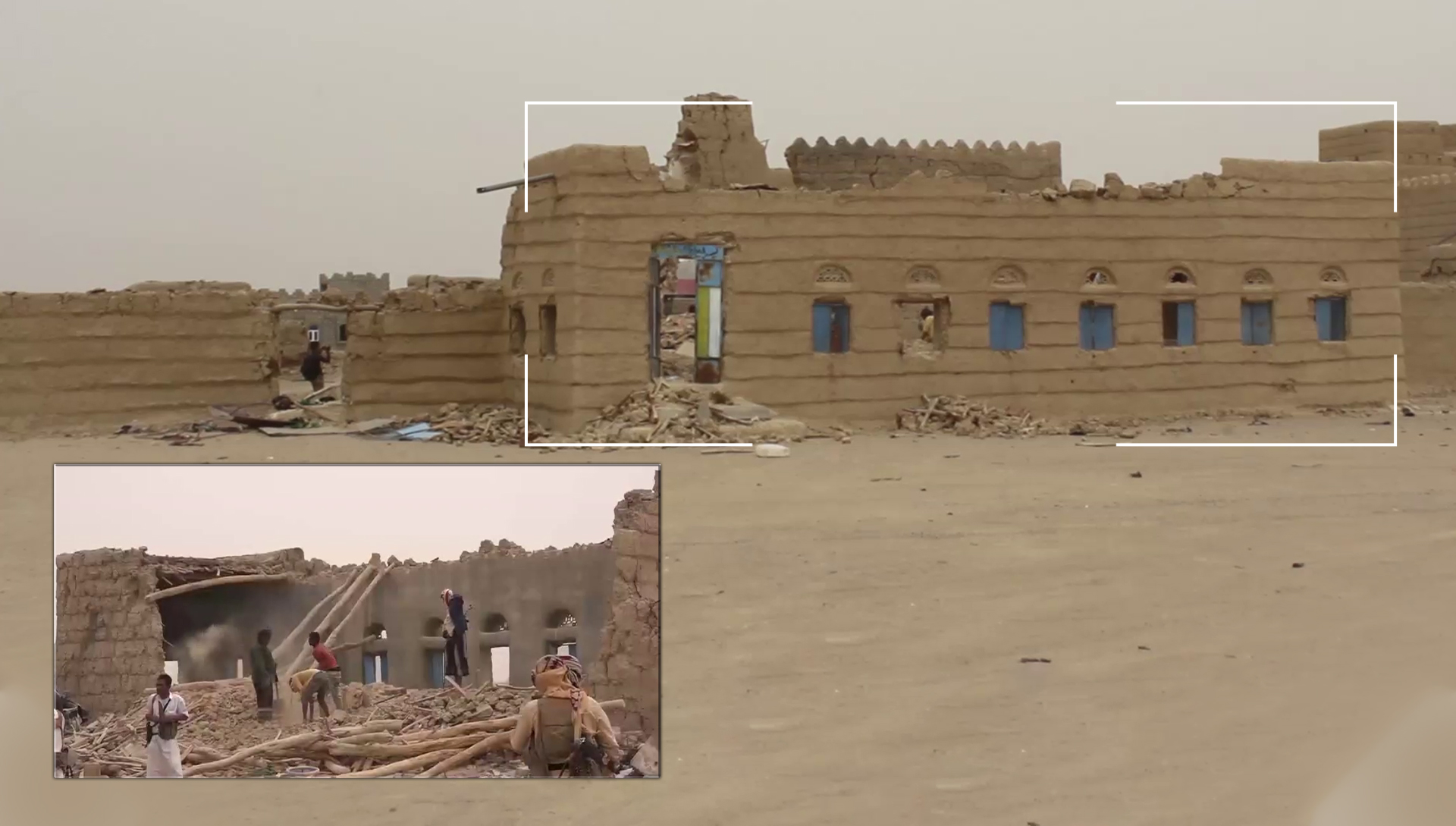 When in comparison, the external landmarks which surround the targeted houses, that are featured in a video captured by the Yemeni Archive’s field team and the aerial footage taken by Houthi Group Media Center match what is shown in satellite imagery from Google Earth Pro of that same location. 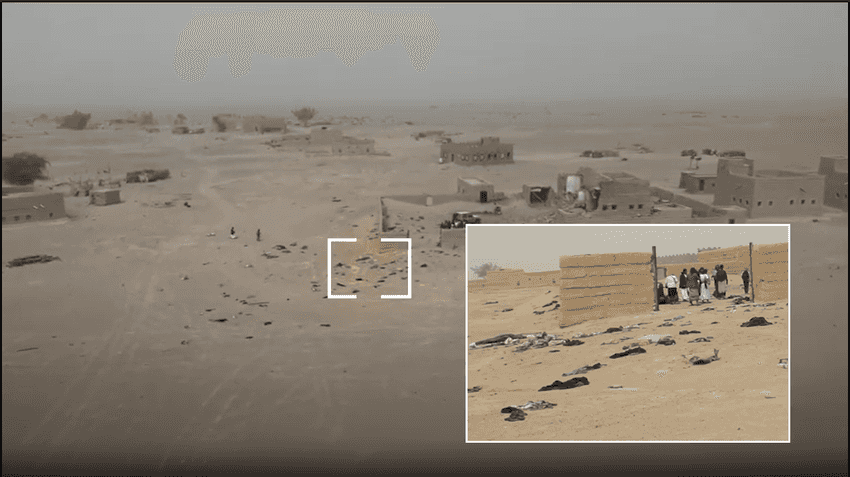 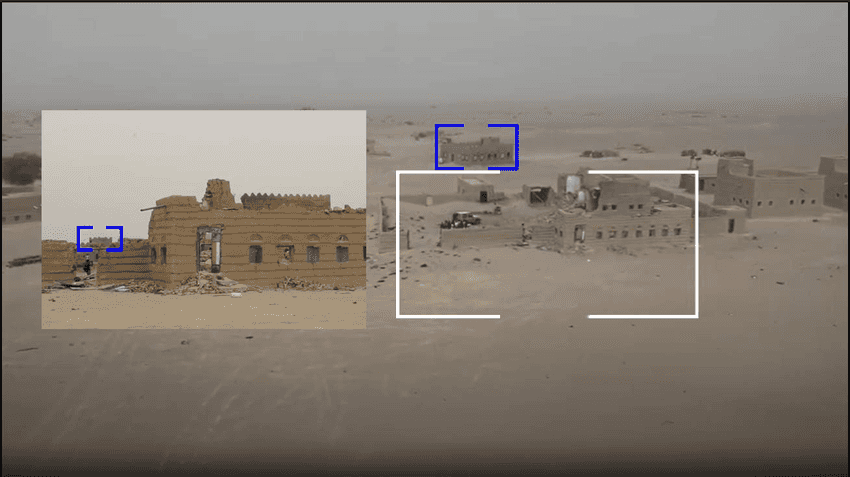 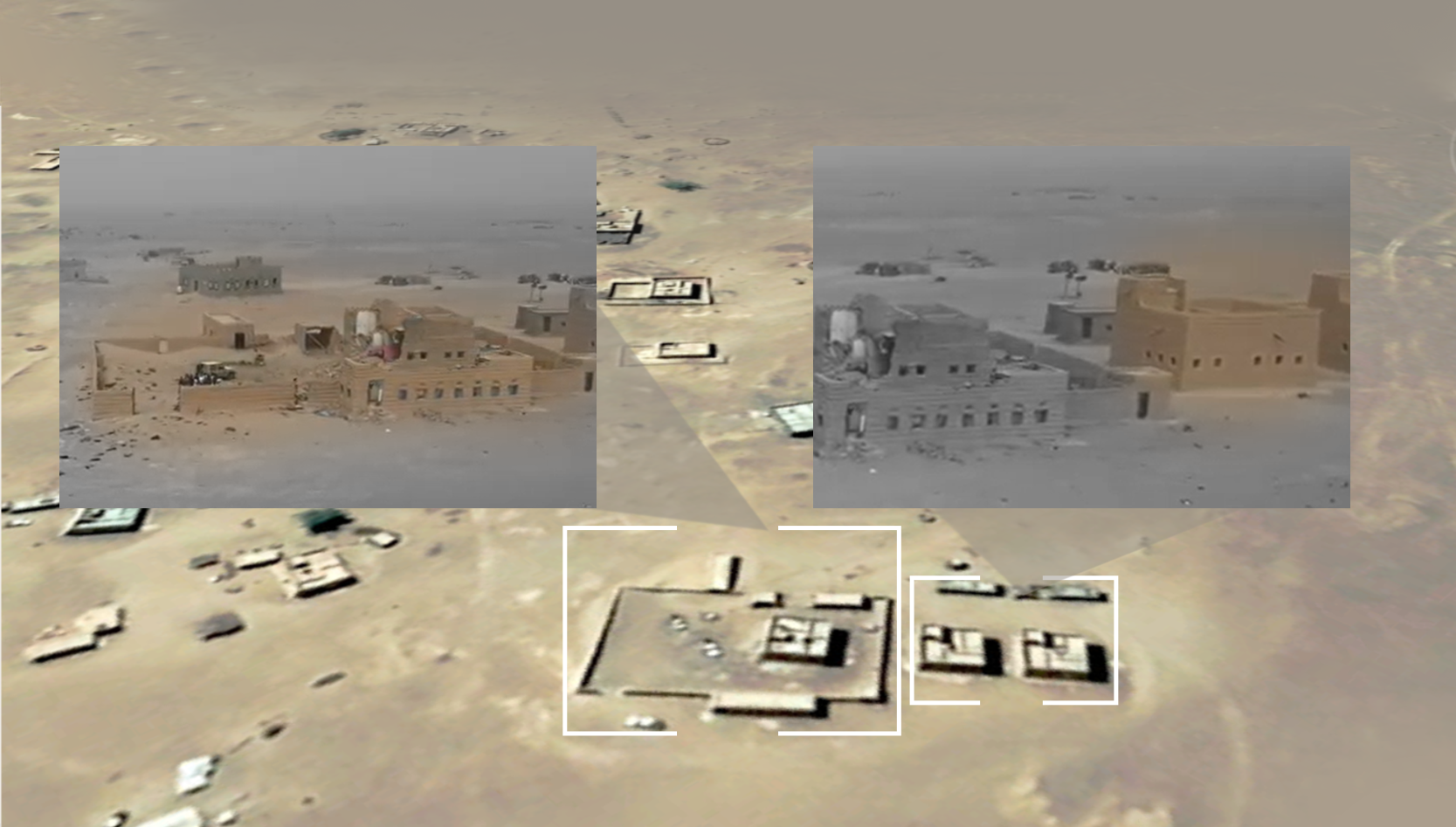 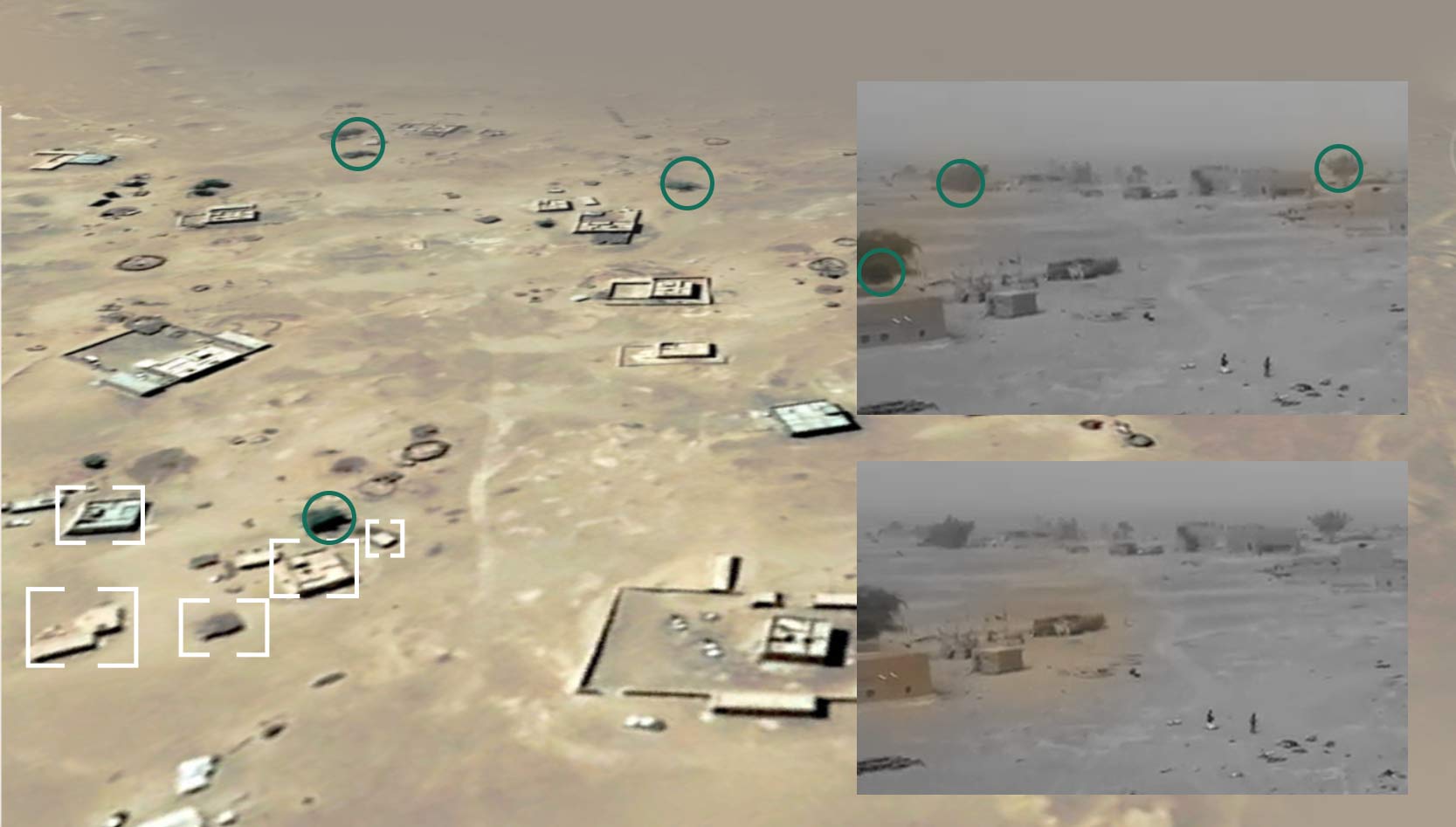 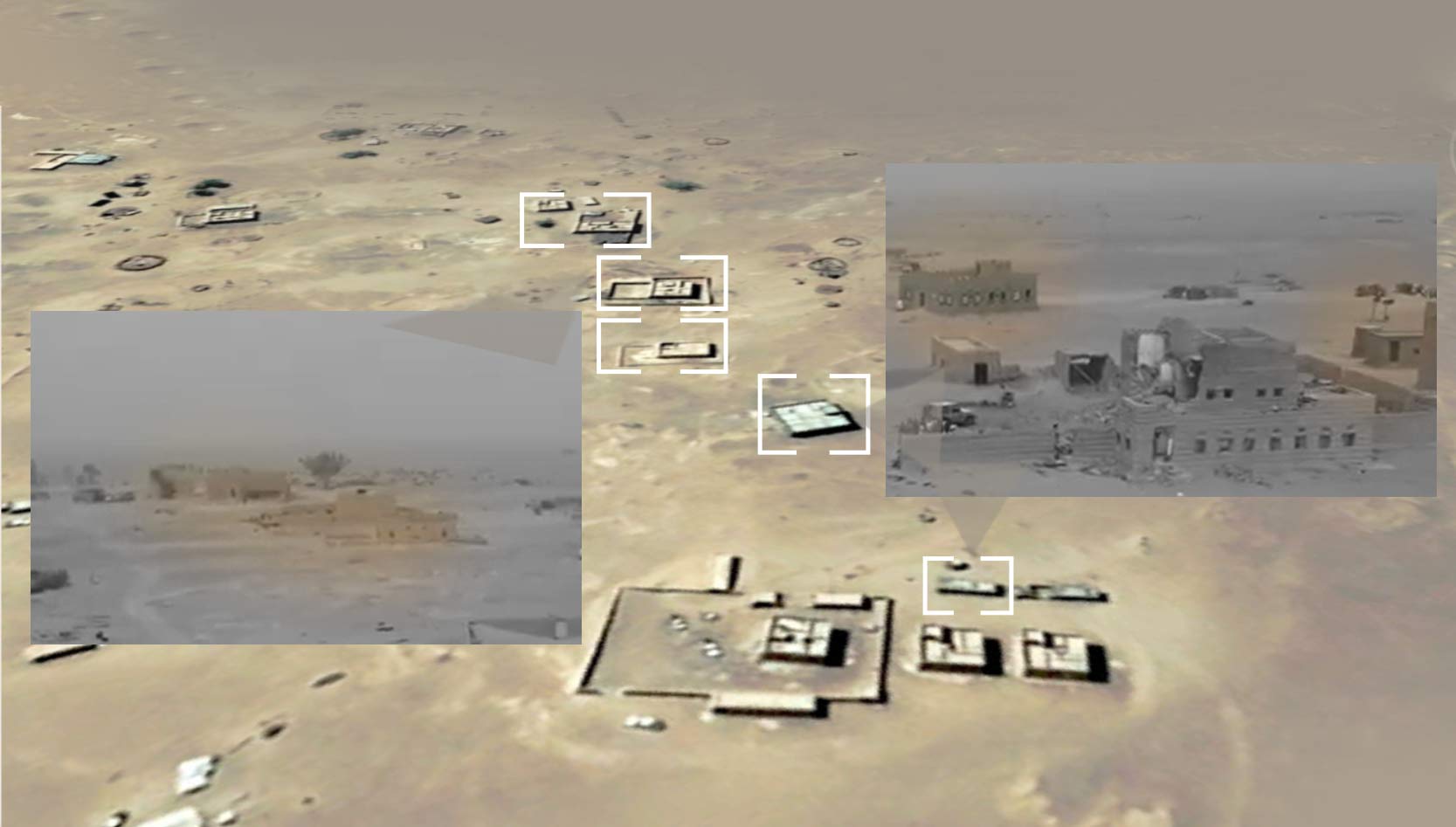 As mentioned earlier, two airstrikes hit the second house destroying it completely. Compared to the first house, there is limited visual content showing the first house after the strike as it does not exceed more than one minute in the both footeges of Al Masirah TV and Houthi Group Media Center reports. However, Yemeni Archive was able to differentiate between the houses using the details and characteristics of the damage to both locations as well as the unique visual landmarks surrounding them. 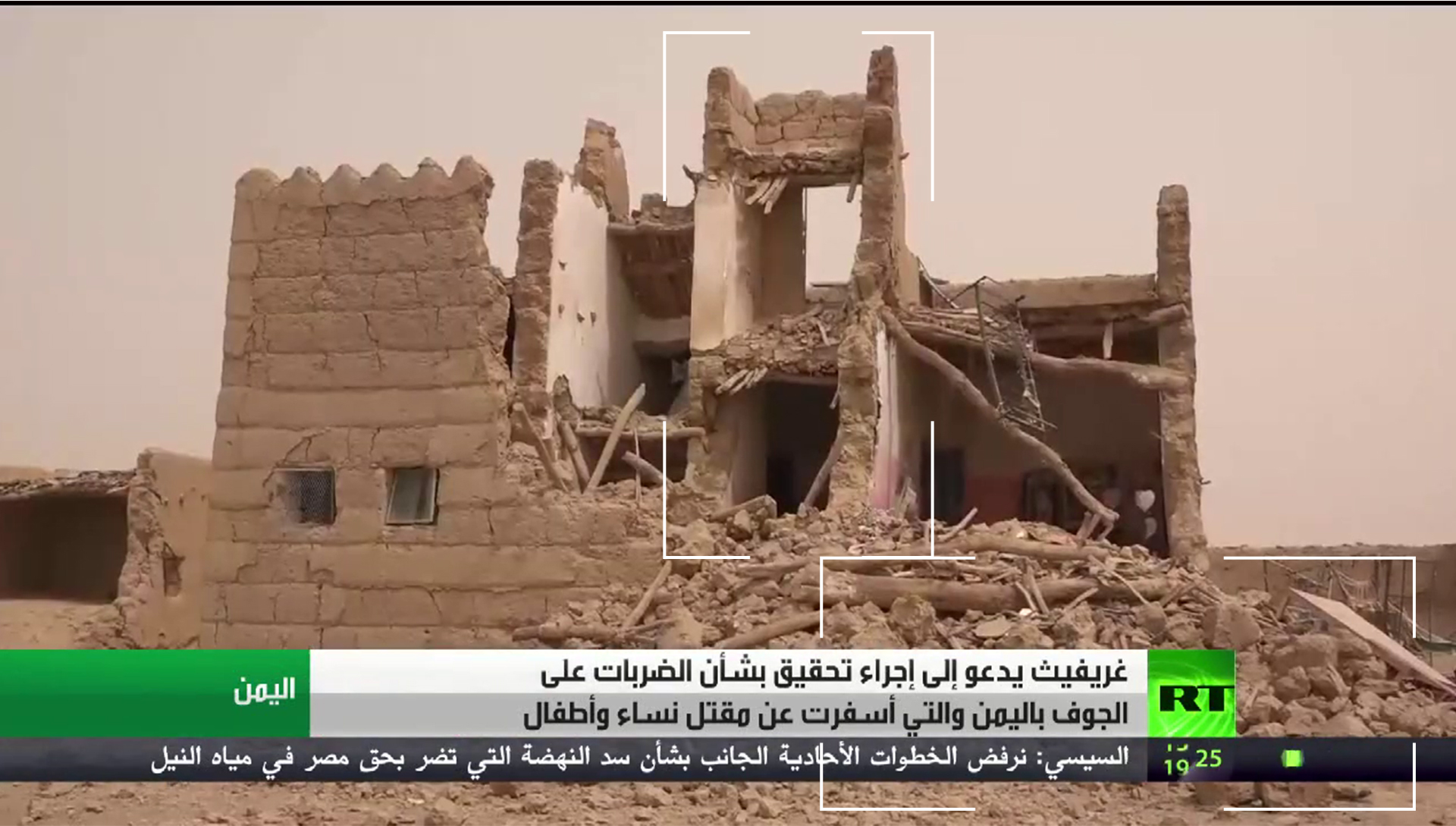 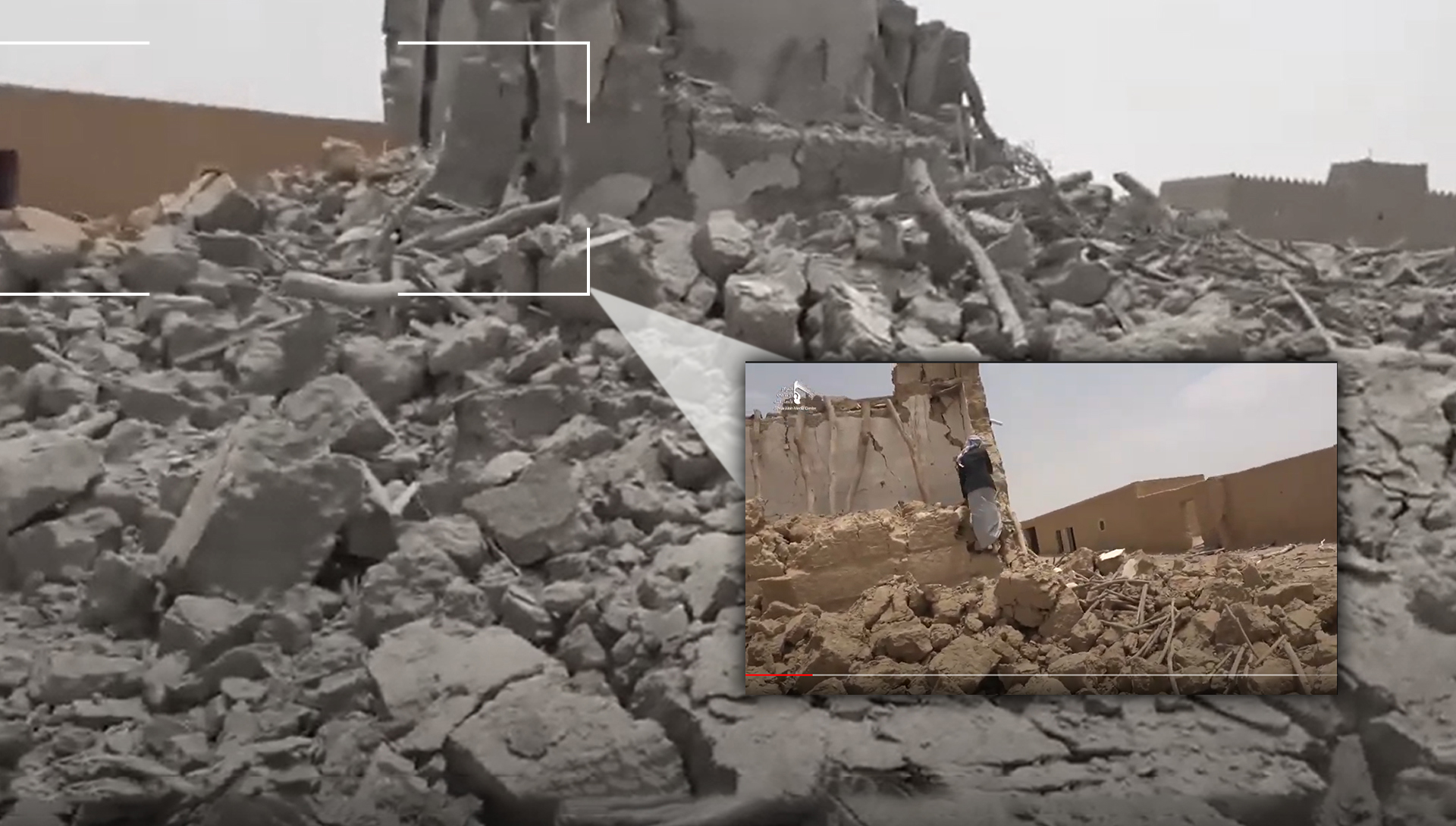 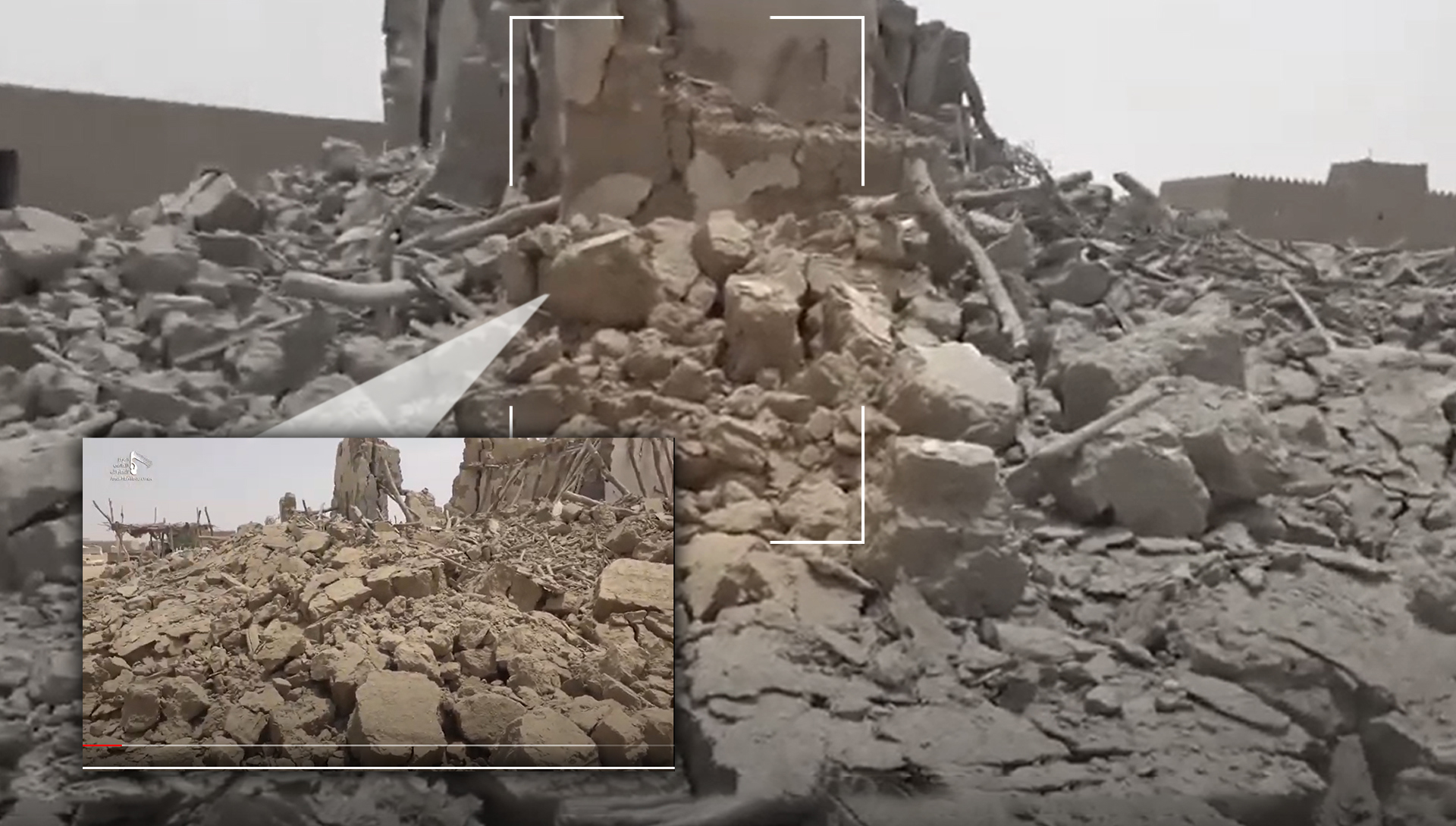 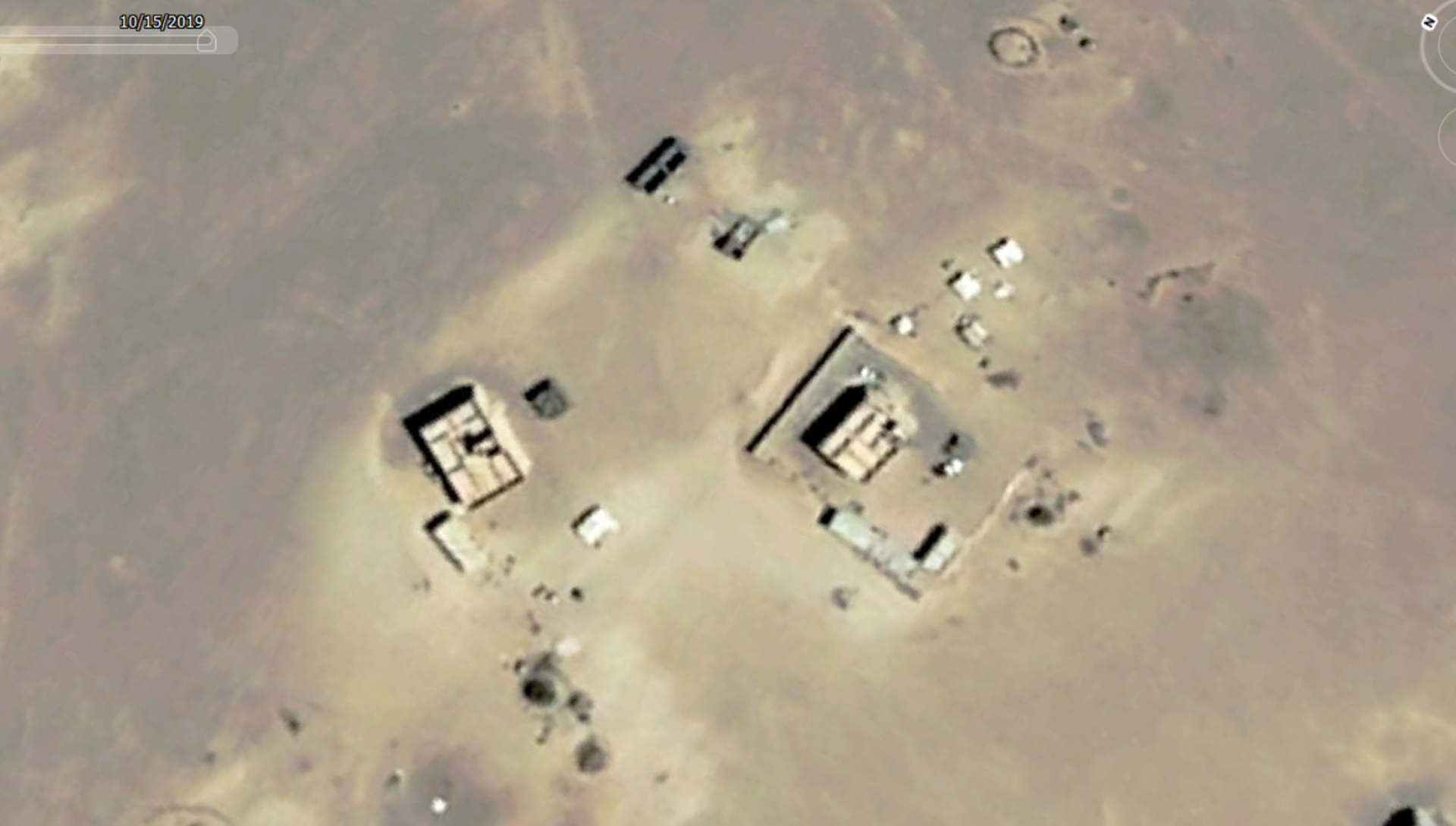 Further identifying the location and damage to the homes, Yemeni Archive was able to find a 2017 TV report from Yemen Shabab TV of the Al Masafah area during the opening of a health unit. After analyzing the footage and determining the angle the video was shot, we were able to identify the two targeted houses.In the TV report, they match the same distance apart and feature the same surrounding landmarks that are shown in satellite imagery and the open source media outlined above. 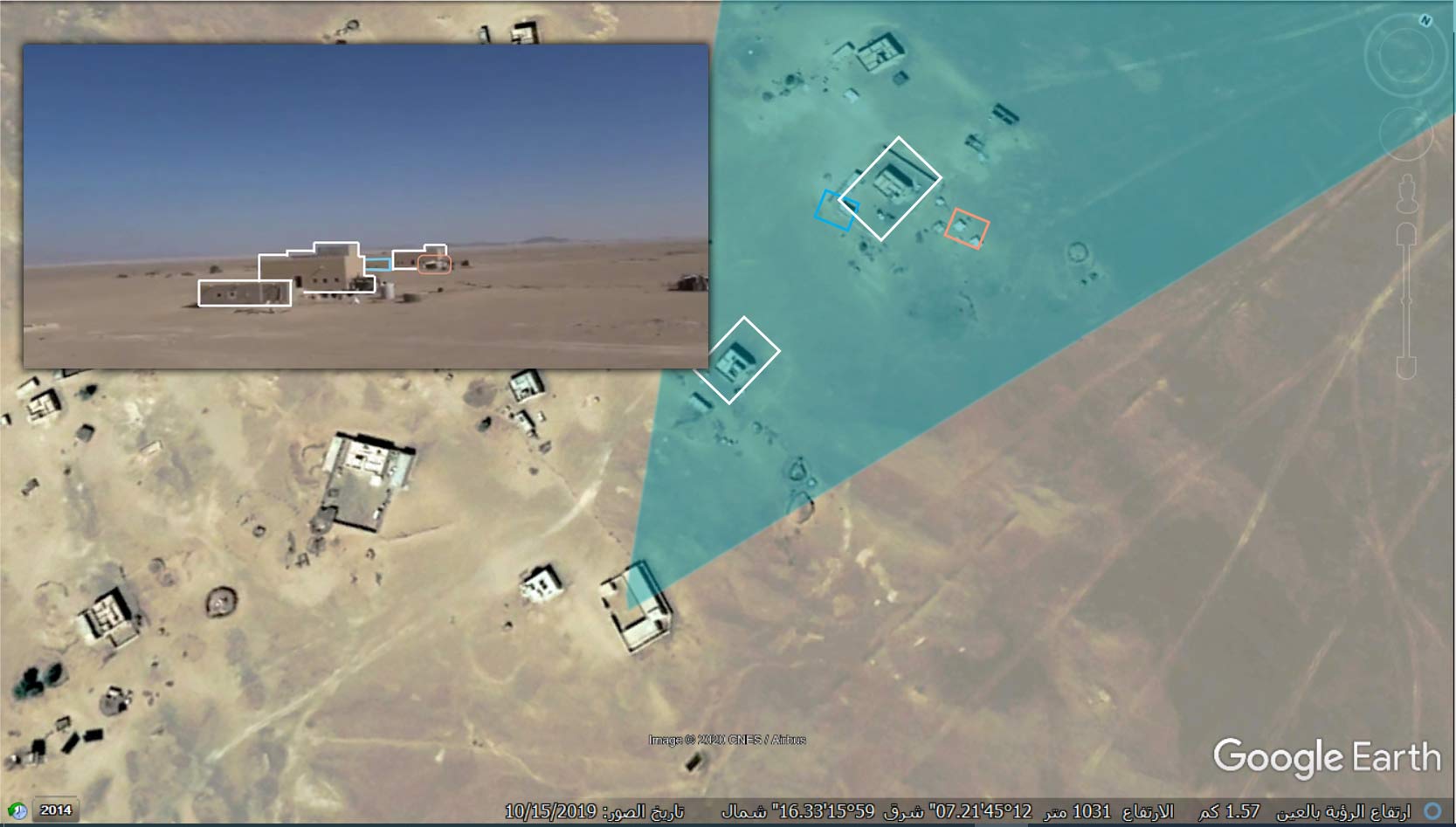 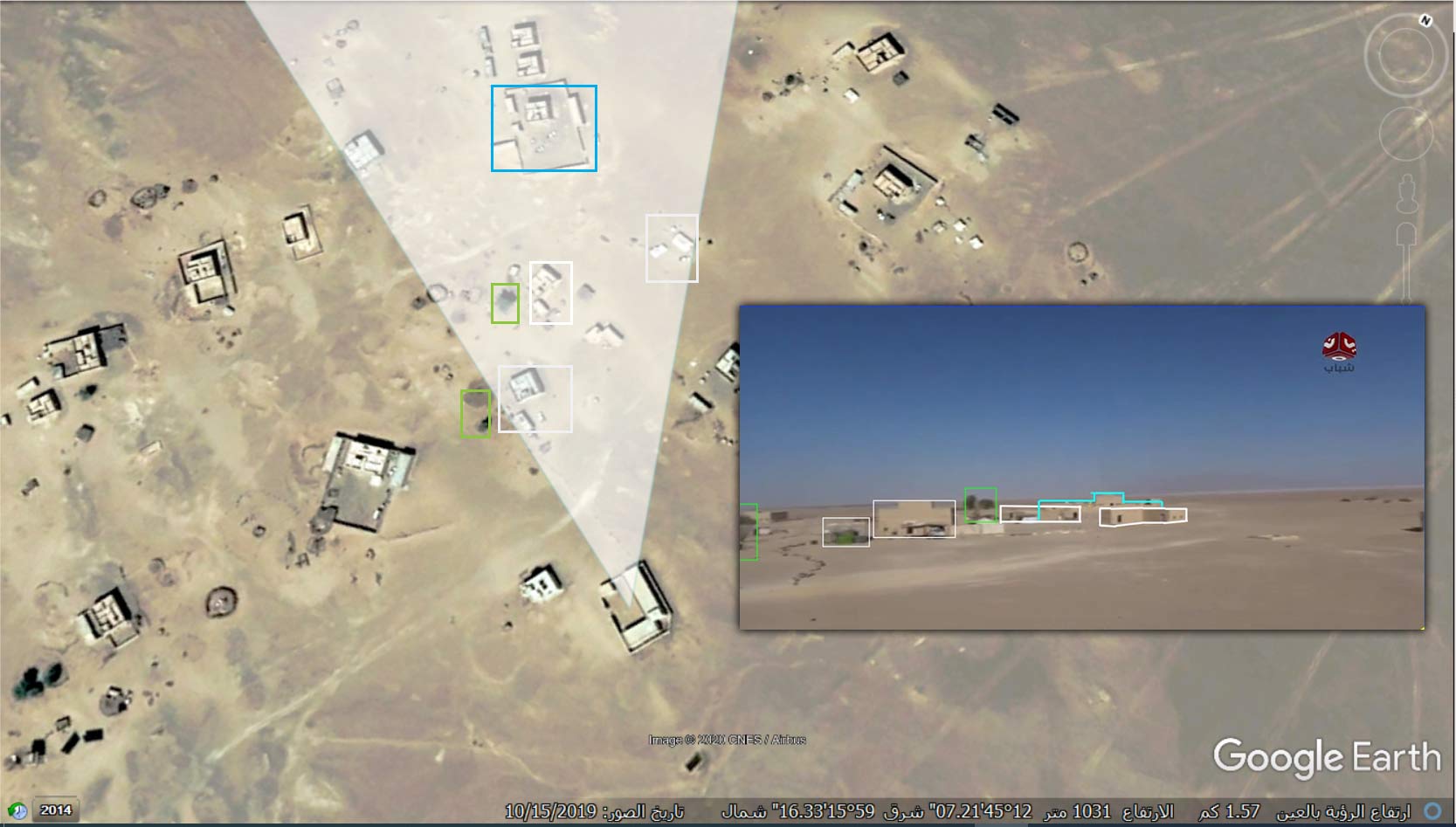 Through four different sources interviewed by the Yemeni Archive including Naji Mabkhoot Marzouq (the only survivor of his family) as well as open source posts and documents naming those injured and killed, Yemeni Archive was able to confirm that 10 were killed and 4 were injured in the attack. Most of the victims were women and children.

Bushra Al-Maqtari’s account on Facebook published the names of the victims who were killed in the attack. 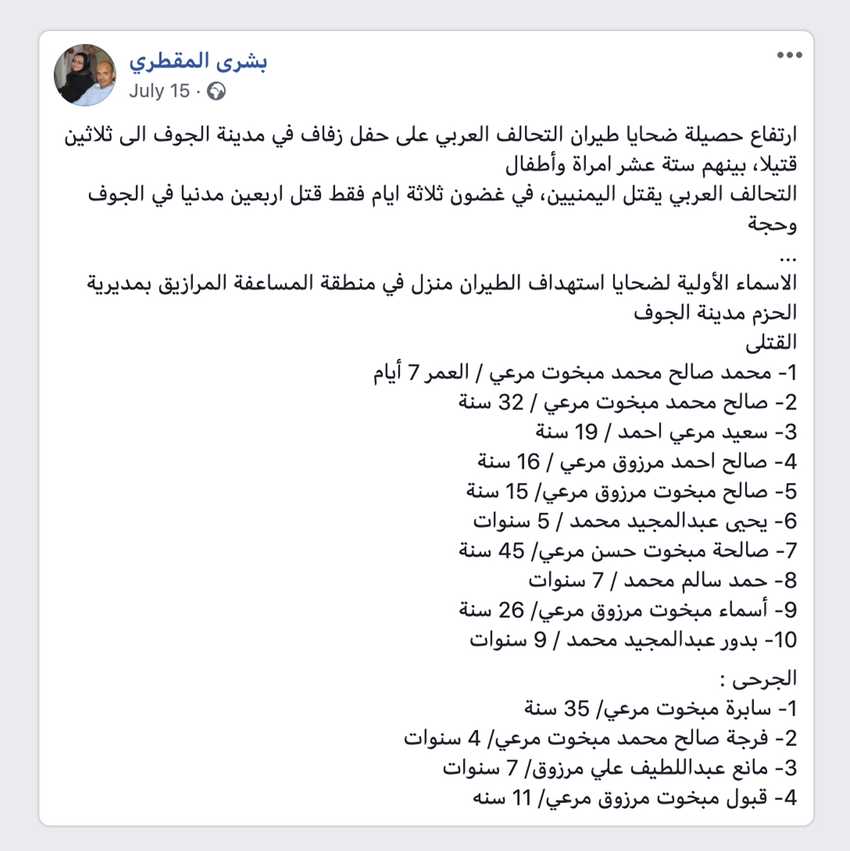 Yassin Hashem’s account on Facebook also published the names of the victims who were killed in the attack.

An infographic, issued by the Statistics and Information Department of the Ministry of Public Health and Population and posted by the “Ahmed Jahaf” account on Twitter, showing statistics of those injured and killed in the attack.

##Different positions on the attack

A day after the attack, the United Nations Special Envoy for Yemen, led by Martin Griffiths, tweeted condemning the airstrike that targeted the Al-Jawf area as well as noting the number of civilian casualties. In the tweet, the envoy demanded a comprehensive and transparent investigation. The Humanitarian Coordinator for Yemen, Ms. Lise Grande, said in a statement following the attack that “what we’re seeing is horrible.”

While at the time of writing this investigation, the Saudi-led coalition has yet to comment on the Al-Masafah attack in the Al Jawf province, several news sites, including Almashhad Alkhaleeji mentioned potential conversations between the “Awliya al-Dam” and Saudi Arabia to remediate the “wrongful attack.” In a statement to Al-Mashhad.net, a tribal source mentioned of actions taken to contain the situation. 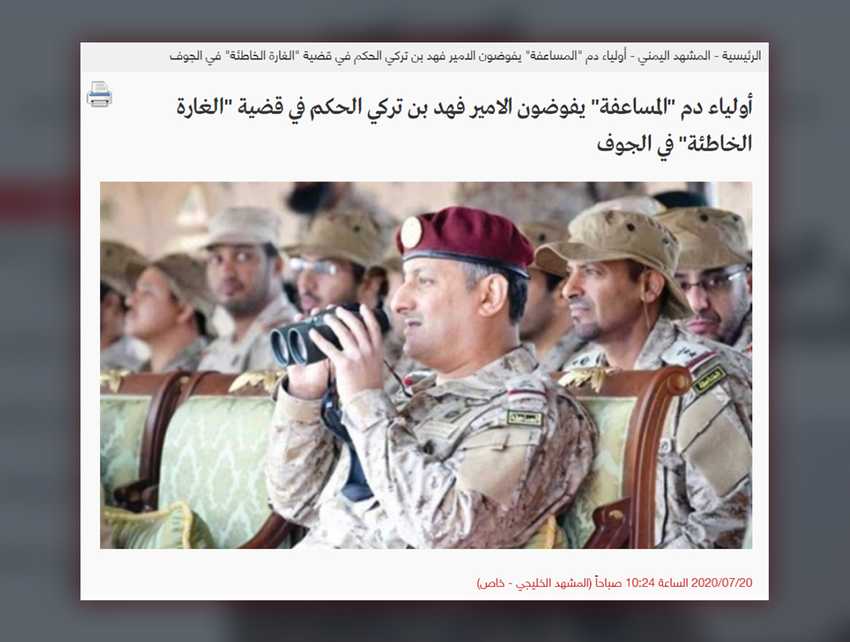 A photo of the report published by Al-Mashaid.net