After gathering, verifying and analysing open-source data and visual content, Yemeni Archive has concluded that on March 26, 2019 at 9:30 am, a Saudi-led coalition airstrike on a gas station near Kitaf Rural Hospital for Children partially destroyed the hospital, killed seven civilians, including four children,and injured eight others.

The attack took place in the district of Kitaf, about 100 km away from Sa’dah governorate in northern Yemen, an area that came under the control of Houthi forces in 2014.

To determine the exact location of the attack, Yemeni Archive collected and verified visual content associated with the incident. This involved identifying landmarks as well as locating Kitaf Rural Hospital using satellite imagery. 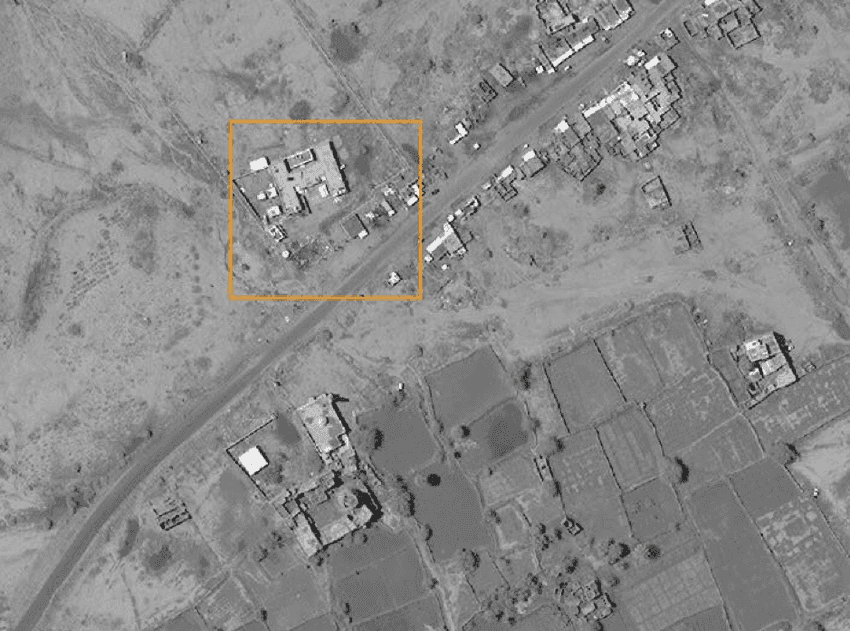 Satellite imagery was taken from TerraServer of the Kitaf Rural Hospital in the district of Kitaf in Sa’dah governorate. 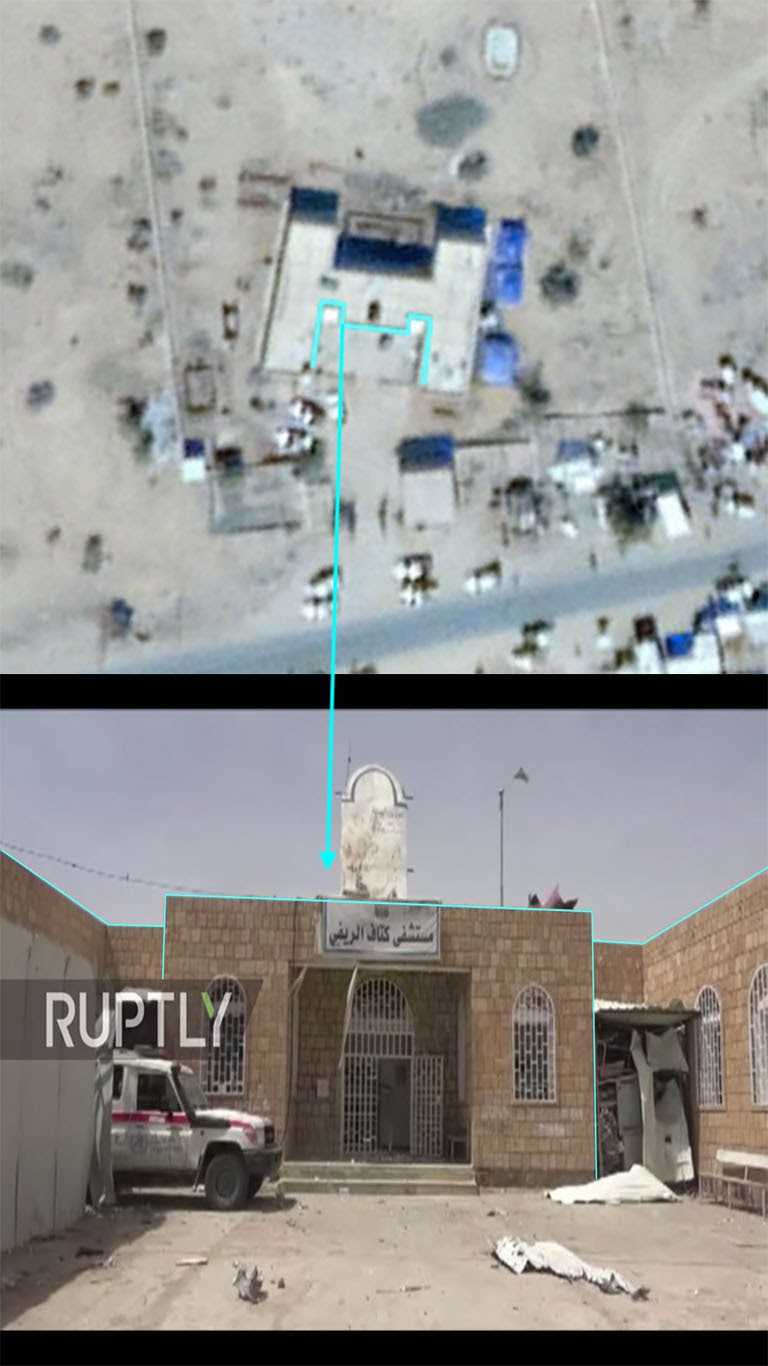 Satellite imagery was taken from Google Earth of the Kitaf Rural Hospital and compared with a snapshot that appeared in a video by RUPTLY channel. The images showed a match.

On March 26, 2019, several activists and news outlets circulated information on social media about an aerial bombardment targeting a gas station near the Kitaf Rural Hospital for Children. The posts claimed that a Saudi-led coalition aircraft launched a guided bomb that resulted in casualties.

That same day, the Ministry of Human Rights in Yemen published a statement on their Facebook page about the attack on the hospital which they said was perpetrated by the Saudi-led coalition. Yemeni Archive verified the date of publication of the statement using Timestamp. Yemen News Agency also reported that day that the hospital and the gas station were targeted. 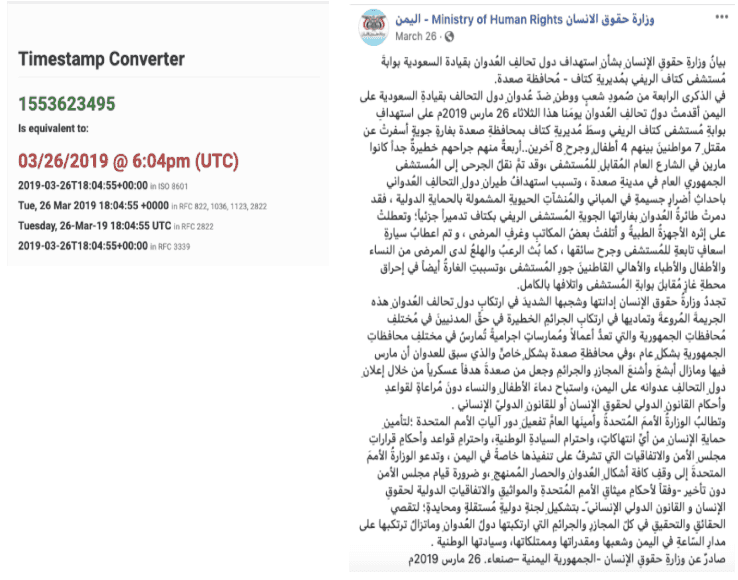 Also on the day after the attack, Save the Children published a statement on their Twitter account in which they stated that seven people were killed by a bomb that targeted a hospital that supported by the organisation. 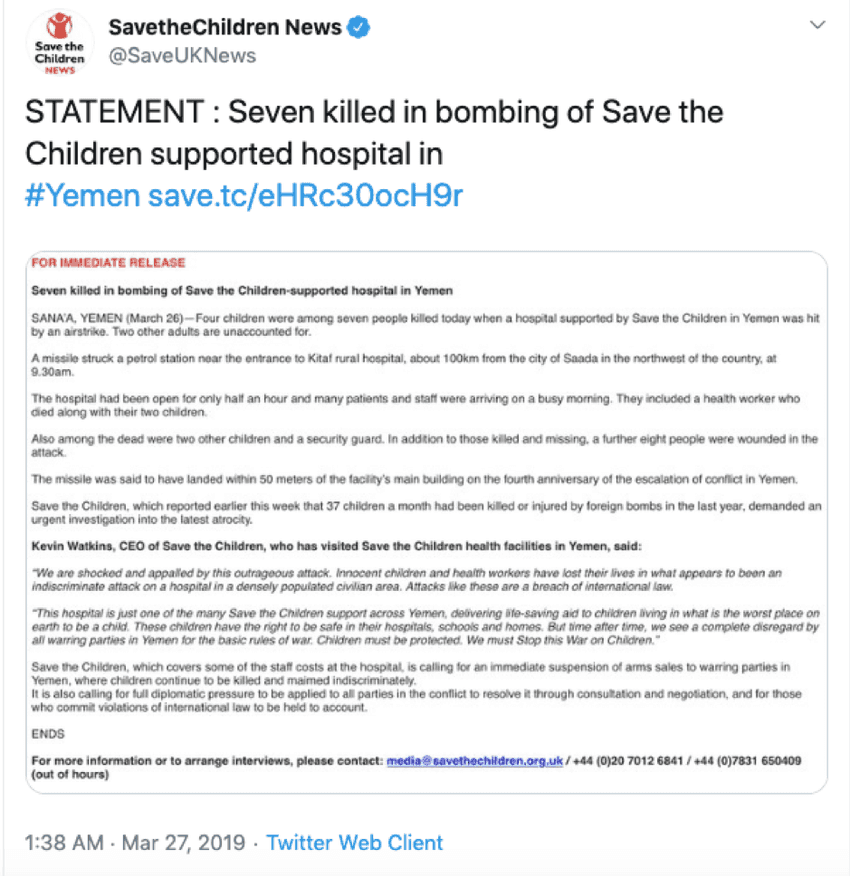 Several weeks later, on June 12, the Sabq newspaper published an article in which the Joint Incidents Assessment Team (JIAT), a body set up by the Saudi-led coalition to investigate “accidents” in their conduct of the Yemeni war, claimed that there was a malfunction in the warplane’s targeting mechanism. The aircraft allegedly asked for the support of another warplane to direct the bomb to the specified military target.

Video recordings of the aircraft show that it directed the bomb using a targeting laser aied at the military target, which was fighters of the Houthi forces who were hiding under a tree in an empty area about 100 metres away from the hospital. Instead, the missile veered off course and hit the hospital. This led to the destruction of the hospital entrance as well as a small section of the hospital building and a gas station.

Reuters reported that State Department spokesperson Robert Palladino said the bombing of a Save the Children-supported hospital in Yemen was “awful”, and urged the Saudi-led coalition to investigate the incident.

When the attack happen?

Save the Children, which supports the Kitaf Rural Hospital, reported on their Twitter account that the attack took place on March 26, 2019 at 9:30 am local time. Mohamed Ahmed Al-Hatmi also posted a statement on his personal Facebook page from the Legal Center for Rights and Development (CDRL) stating that the date and the time of the attack was 26 March 2019 at 9:30 am local time. 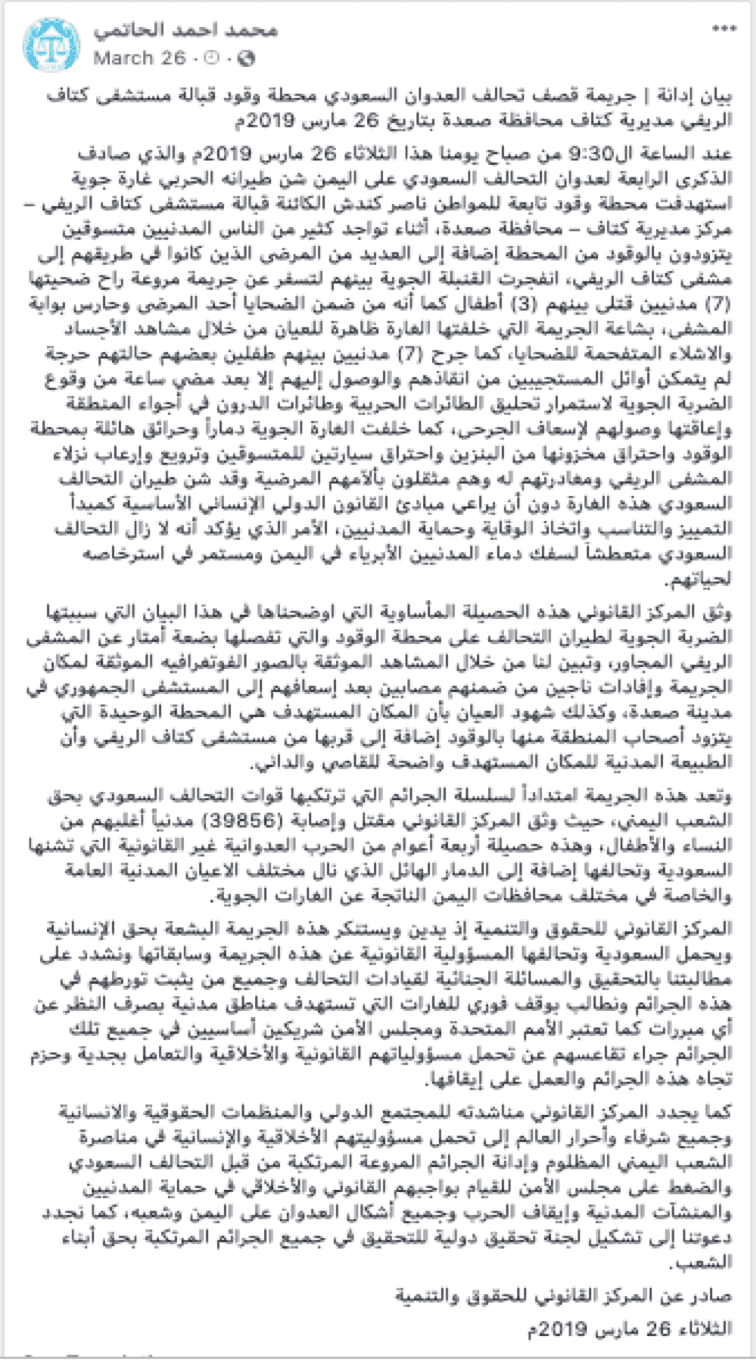 Helle Thorning-Schmidth, who was the CEO of Save the Children at the time, reported news of the attack on her Twitter account about the attack on the same day at 10:46 pm.

The following day, Al Mashhad Al Yemeni YouTube channel posted a video of the hospital. In the video, an eyewitness is heard saying: “A Saudi-American enemy warplane, on Tuesday morning on the 26th of March, attacked a station, a hospital and a pharmacy… There was a market full of civilians … and their bodies are still under the rubble, so far, we have found seven dead, three injured… and the others are still under the rubble.”

Analysis of the Damage : 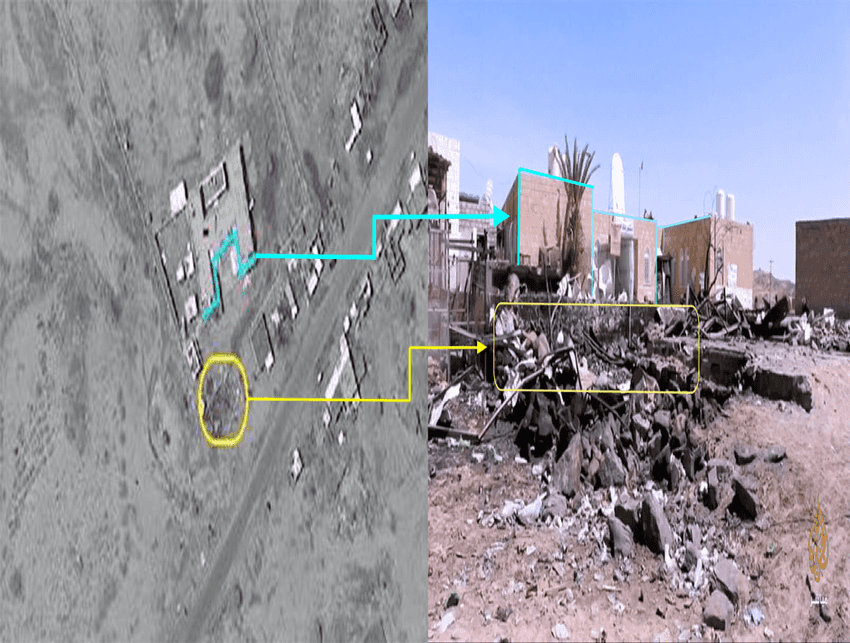 Satellite imagery was also taken from TerraServer of the Kitaf Rural Hospital and compared with a snapshot that appeared in a video by Aljazeera. The images also showed a match. 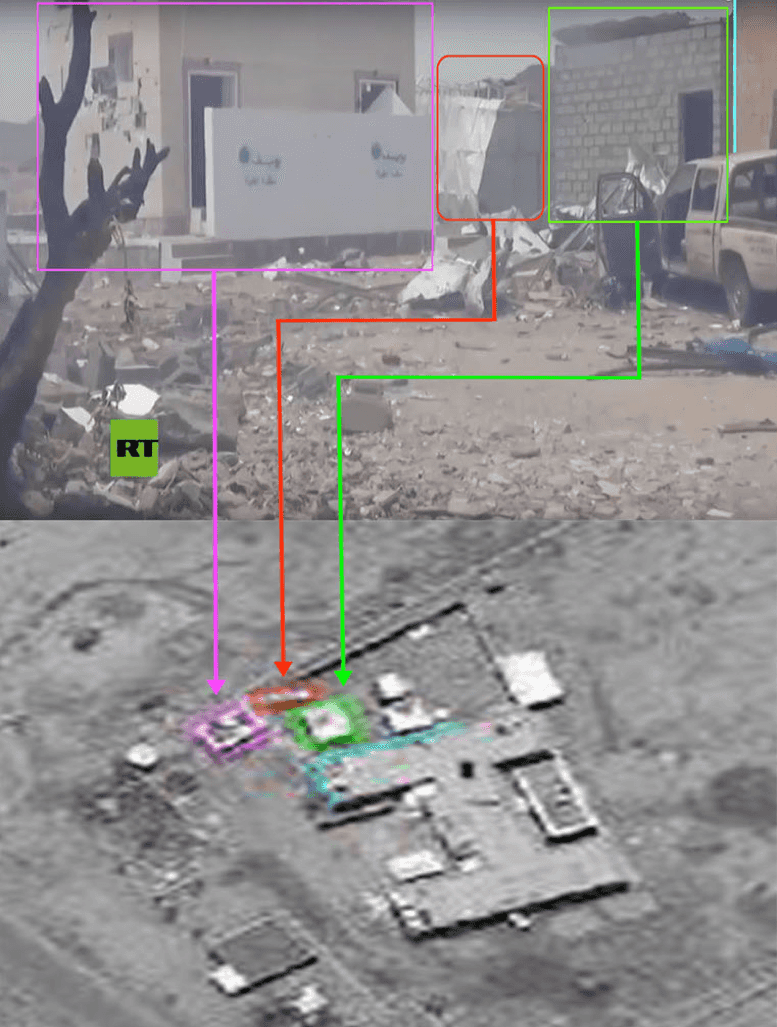 Satellite image was taken from TerraServer of the Kitaf Rural Hospital and compared with a snapshot that appeared in a video by RT Channel. The images also showed a match. 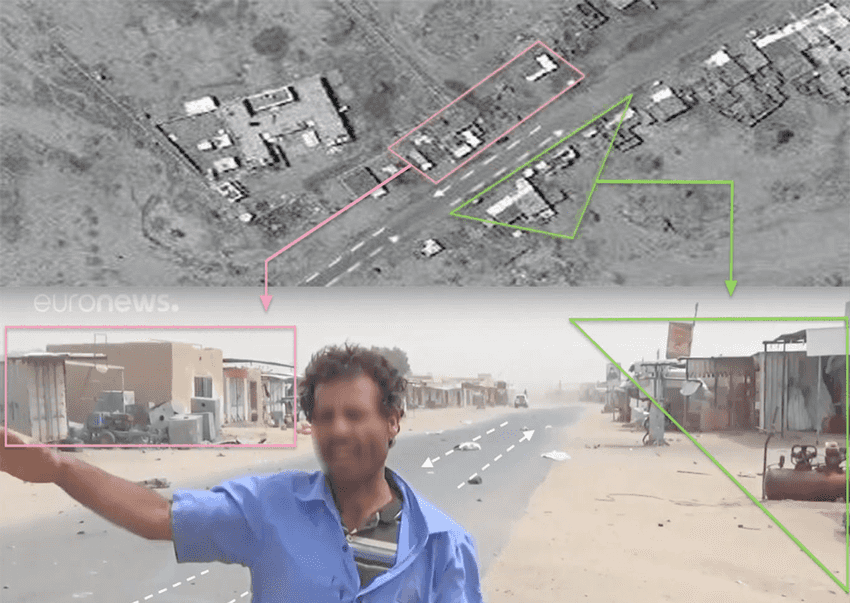 Satellite imagery was taken from TerraServer of the Kitaf Rural Hospital compared with a snapshot of an image which appeared in a video by Euronews. The images showed a match. 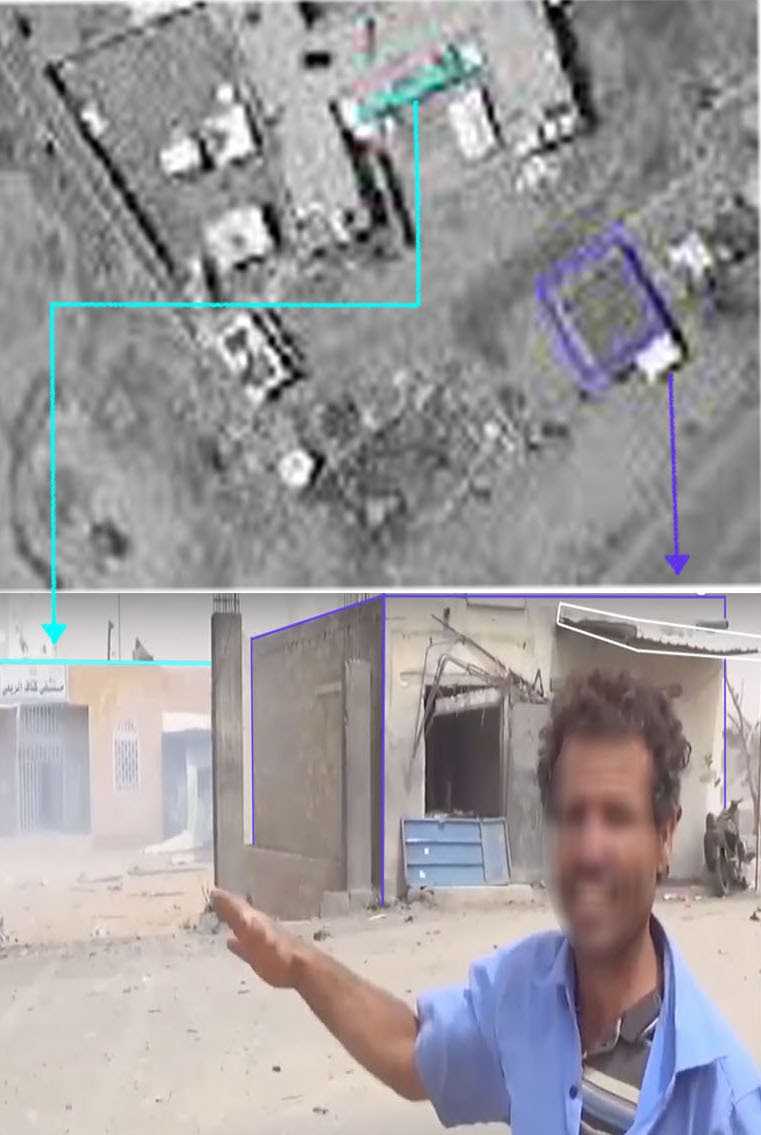 Satellite imagery was taken from TerraServer of the Kitaf Rural Hospital and compared with snapshot of a different angle from the video by Euronews and also showed a match.

The impact of the attack 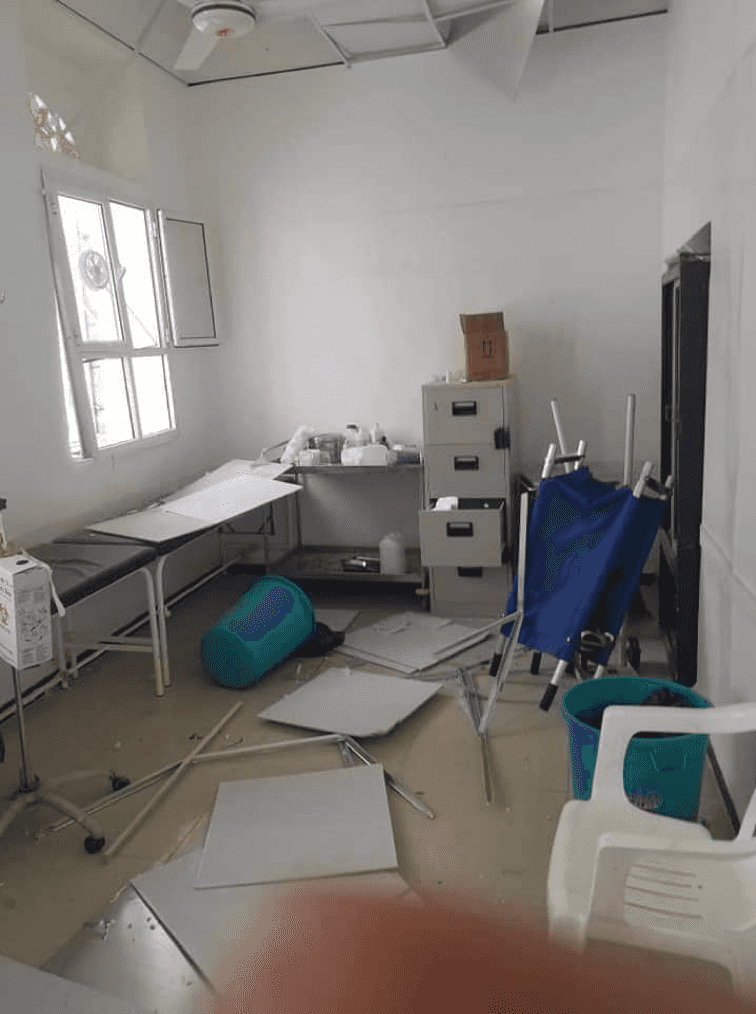 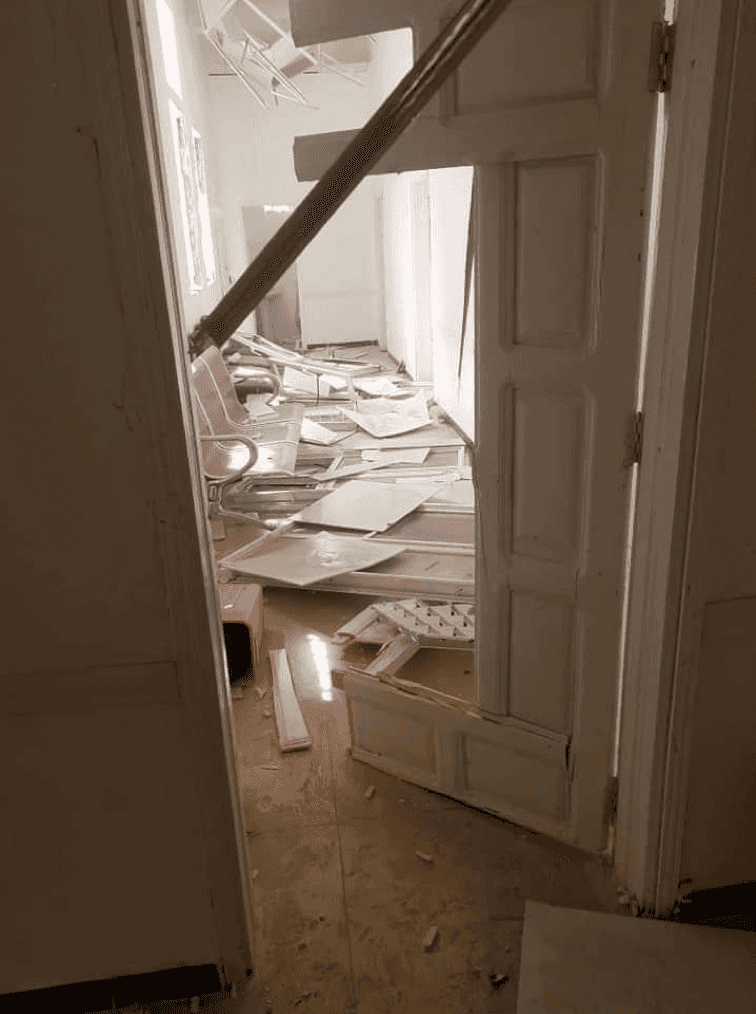 Munir Shri, the director of the hospital, published on the same day of the attack the names of the victims and injured, information by the health office in Kitaf. 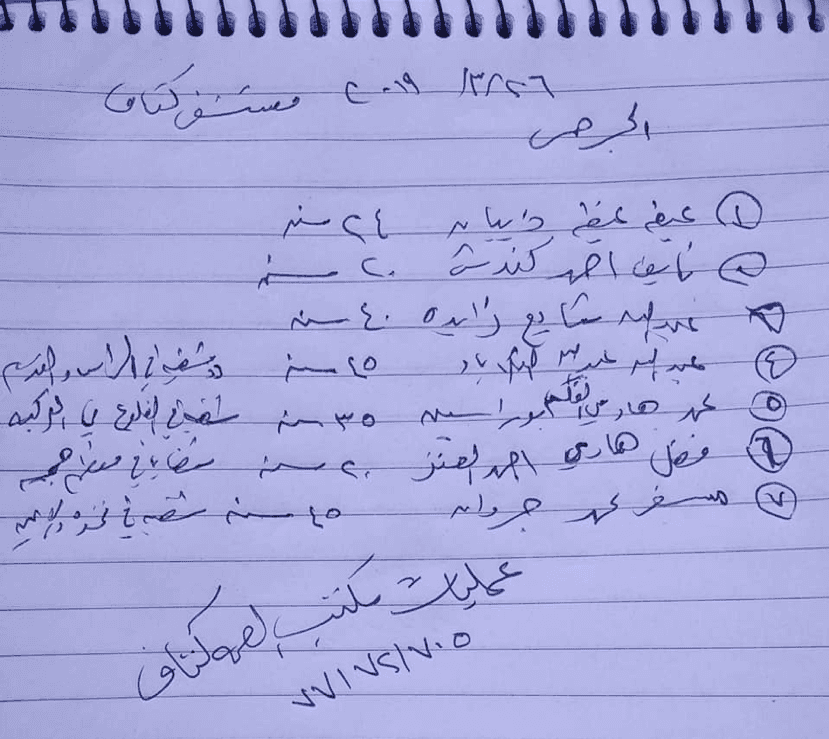 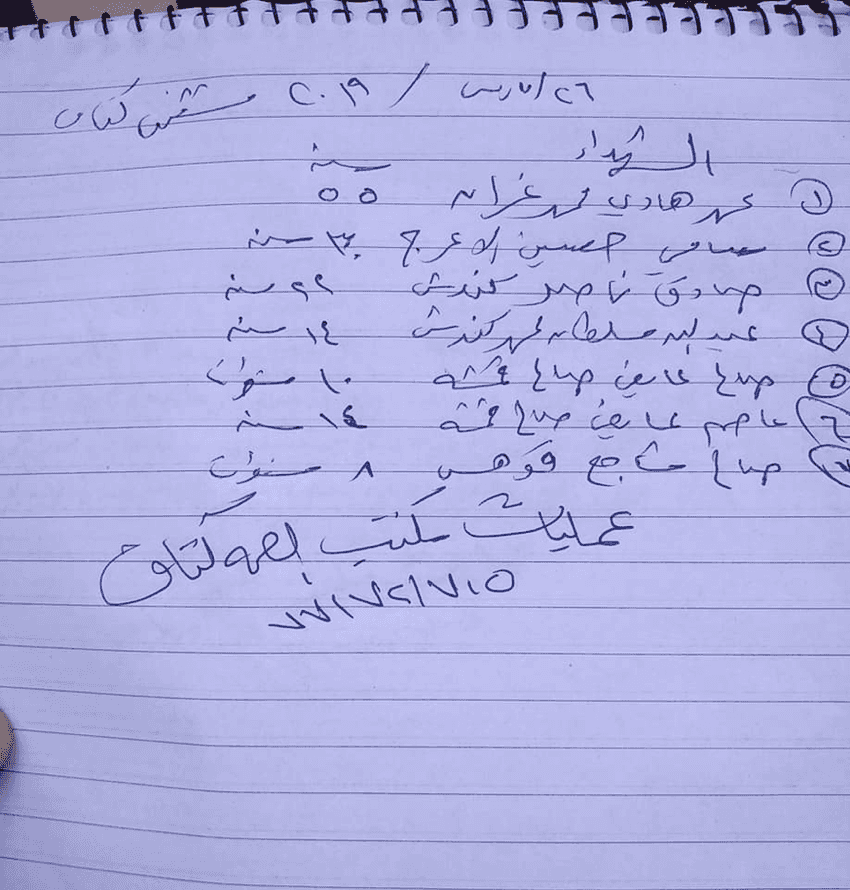