AL-Hunud market neighbourhood is located in the west of Al-Hudaydah city which borders the Red Sea and away from the capital Sana’a about 226 kilometres. It is the capital of Al Hudaydah governorate in Al-Hawk district. In October 2014, forces of the Houthi group and forces loyal to former President Ali Abdullah Saleh seized control of Al-Hudaydah. 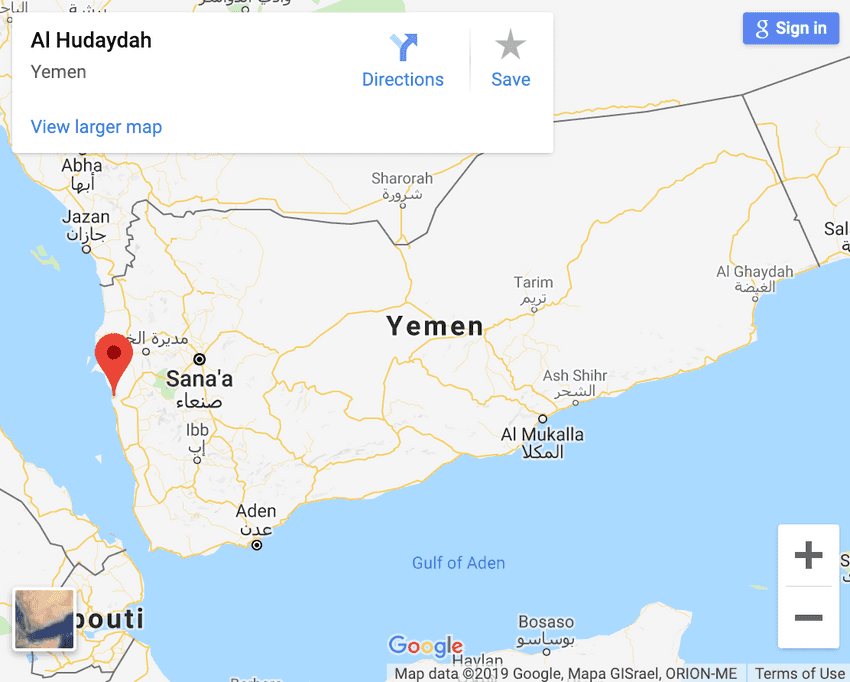 On the evening of 21 September 2016, several news networks and activist pages reported that many airstrikes targeted the Presidential Palace of Al-Hudaydah city, the last airstrike took place in AL-Hunud market neighborhood, where a number of civilian houses were destroyed, resulting in deaths and injuries.

On 21 September 2016 Ayman Ali Numan published on “Where is the explosion now” Facebook group that the coalition airforce launched four airstrikes targeting the surroundings of the Presidential Palace, and that the last airstrike targeted AL-Hunud market neighborhood. He added, the buildings of Central Security Forces, Air Defense and the Criminal Investigation in Al-Hudaydah were bombed too with several airstrikes. 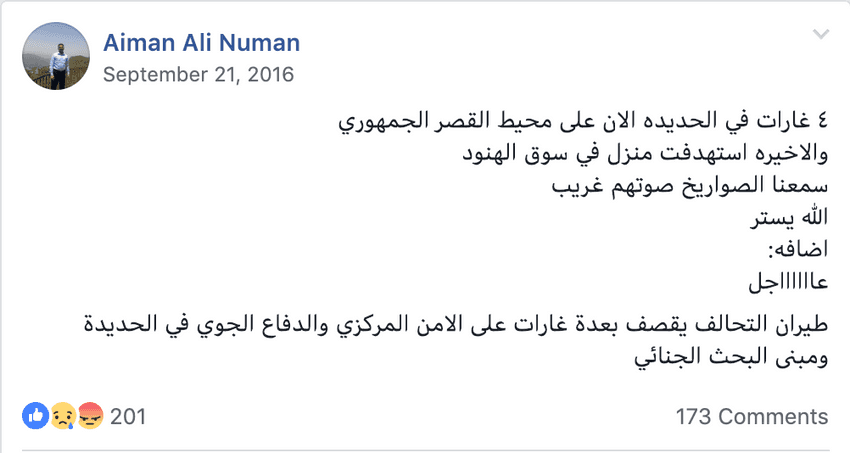 On September 22, 2016, the Yemen Today Youtube channel published a report on the funeral of the victims. The video contains several testimonies of residents. At 1:22 in the video, one of them stated “We are attending the funeral of about 20 martyrs, who (were killed) between night and day, some of the martyrs are still in the mortuary and some are under the rubble”.

That same day, Al-Yemen TV channel published a report on the incident on YouTube, in which several testimonies were recorded, among them the testimony of a person who stated at 0:50: “We have a condolence tent in the neighbourhoods of Siddiqiyeh and Al-Hunud, they have bombed us to kill innocent people, children, women and old people … We do not have weapons and there is no leader among us.”

On September 22, 2016, the Balqees channel on YouTube published a report on the incident showing a number of victims and injured in a hospital. The report also showed victims being extracted from under the rubble at night.

On September 23, 2016, Ahmad Abdullah posted a video on his YouTube channel that he recorded at the night of the attack, showing the destruction in the area. The photographer said at the beginning of the video: “This is the rocket which hit just after the Republican Palace attack, here is Al-Hunud market neighborhood in Al-Hudaydah, a fully populated residential neighborhood.”

When did it happen?

The attack on Al-Hunud market neighbourhood was part of several airstrikes targeted the area over two hours. News networks and activist pages started reporting on the attack of the Republican Palace at about 7 pm on September 21, 2016. The first was a Facebook post by Ayman Ali Numan (resident in Hudaydah) at 19:18 local time, which pointed to the start of targeting the surroundings of the Presidential Palace, the Air Defense and the Criminal Investigation Buildings in Hudaydah, in addition to an airstrike targeted a house in Al-Hunud market neighborhood.

To further verify the time of the attack, we analysed the timestamp of the published Facebook posts using the 4webhelp tool to determine the international time difference and to verify the source

The user “Bin Ghaleb” posted the first tweet about targeting the Republican Palace at 19:34 Yemen time, stated that “targeting the presidential palace in Hudaydah now by Saudi Air Force ” 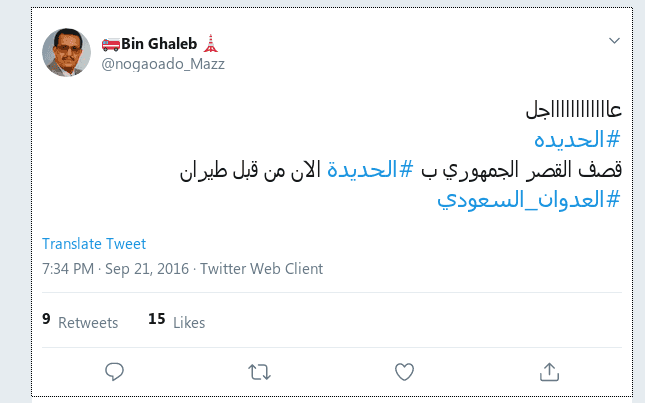 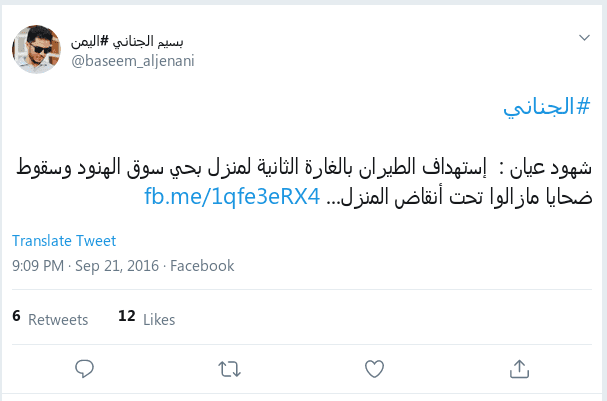 Another post related to the attack was published at 21:12 by Amjad Zaim (a user from Hudaydah city) on his Facebook account, stated that “Al-Hudaydah Now, an airstrike by the Saudi Air Force targeted a condolence tent in Al-Hunud market neighborhood, many civilians were killed, and houses collapsed above its inhabitants, mass fleeing of residents of Al-Hunud market, Al-Shahariyeh and Al-Sham neighborhoods.” 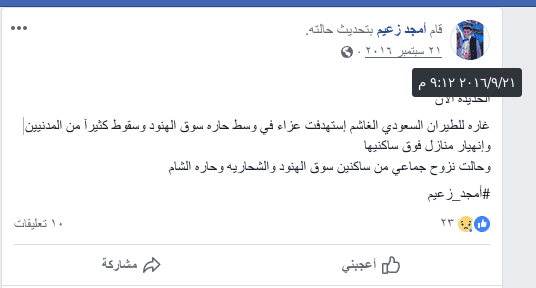 At 20:59 on the same day, a photo was published on Facebook by Fahd Salah showing columns of smoke rising from the Republican Palace area. 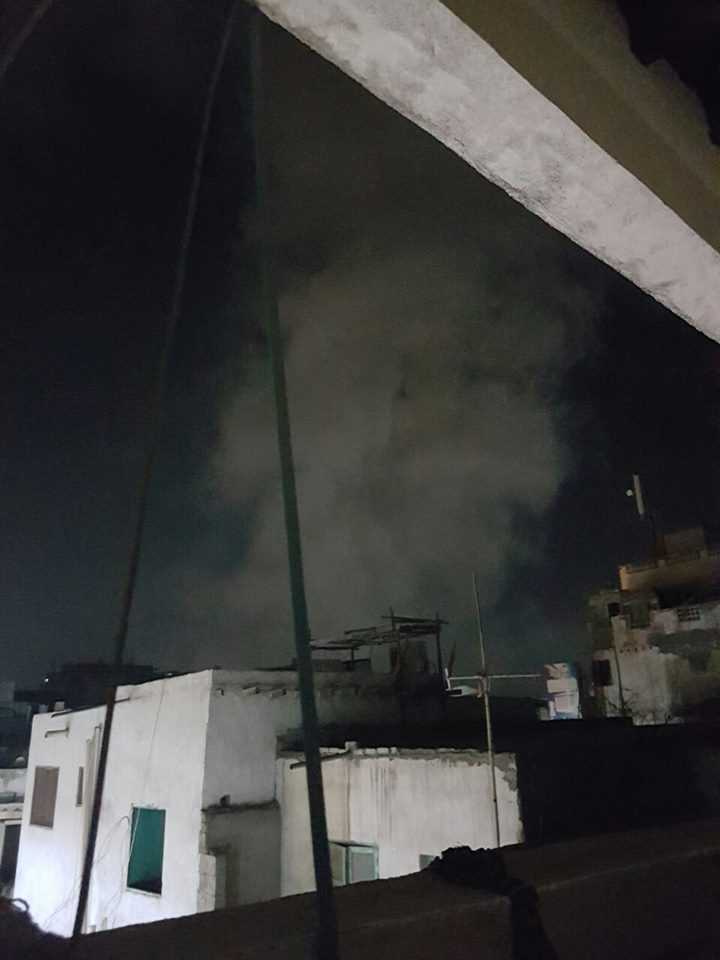 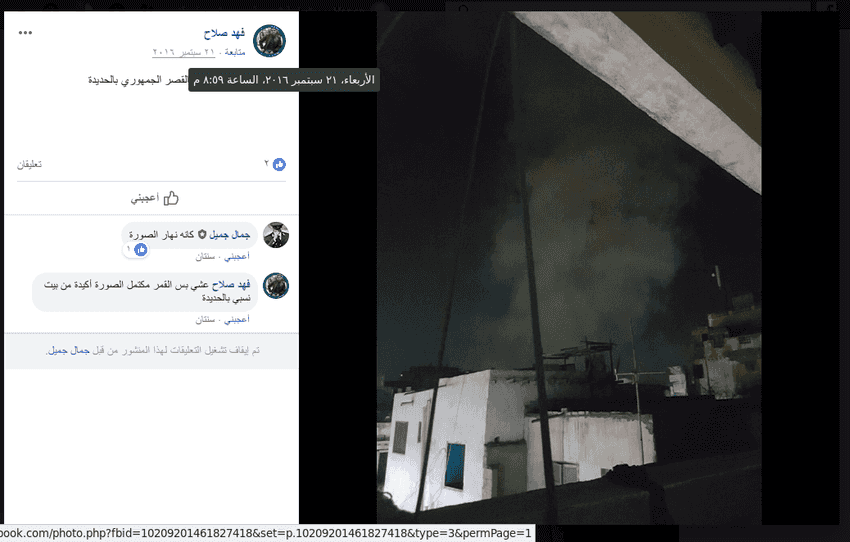 Where did it happen?

To determine the exact targeted location, Yemeni Archive identified the landmarks in the incident-related visual documentation and matched them with satellite images taken to the Al-Hunud market area.

Below is a Satellite image showing the locations of القصر الجمهوري and Al-Hunud market neighborhood and distance between them, which is about half a kilometre. 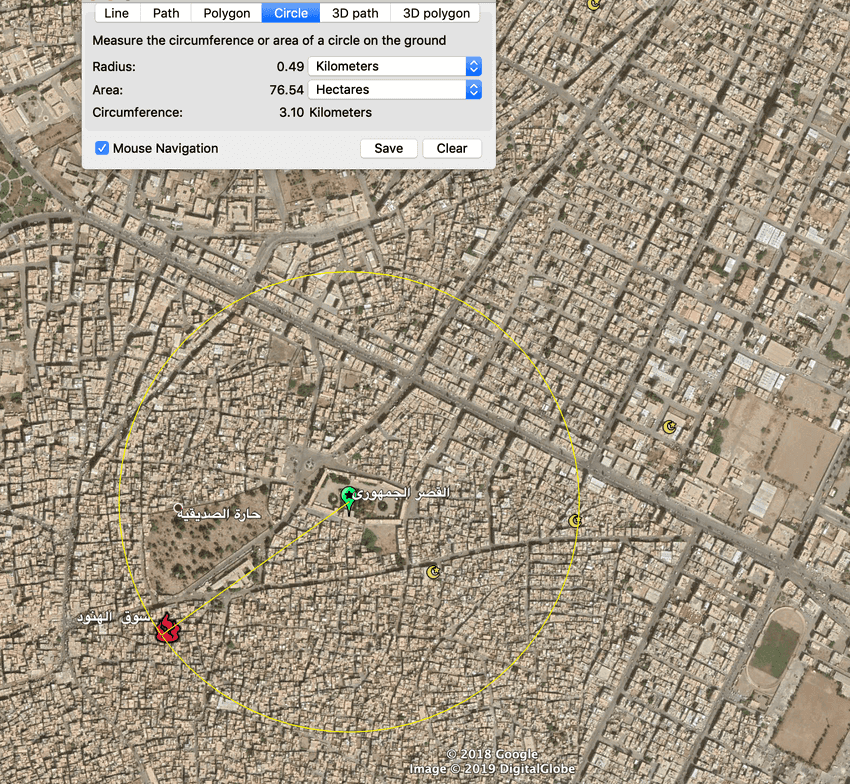 A minaret of a mosque repeatedly appeared in a much of incident-related visual documentation. After the discovery phase, it was ascertained that the minaret belonged to Al-Jaishiyyah Mosque in Hudaydah 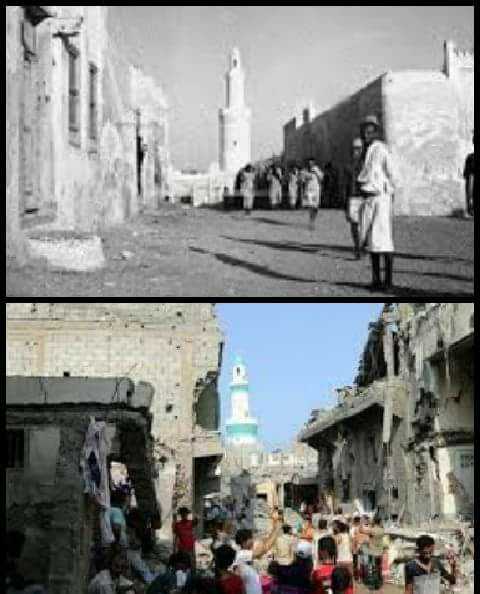 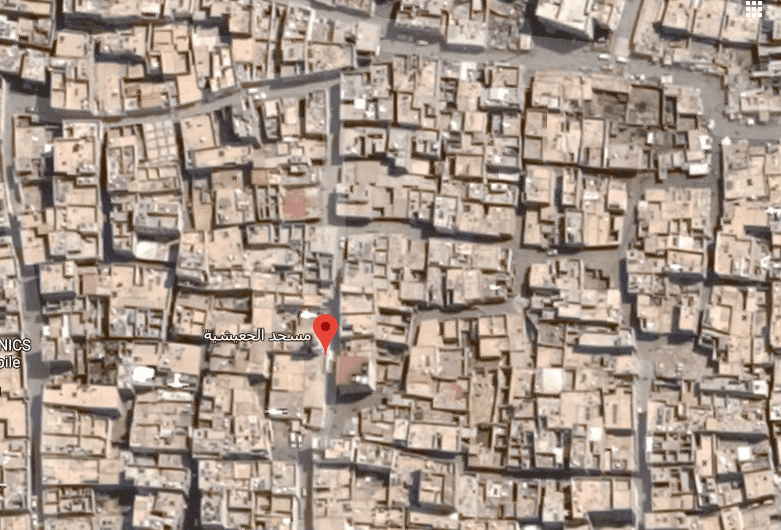 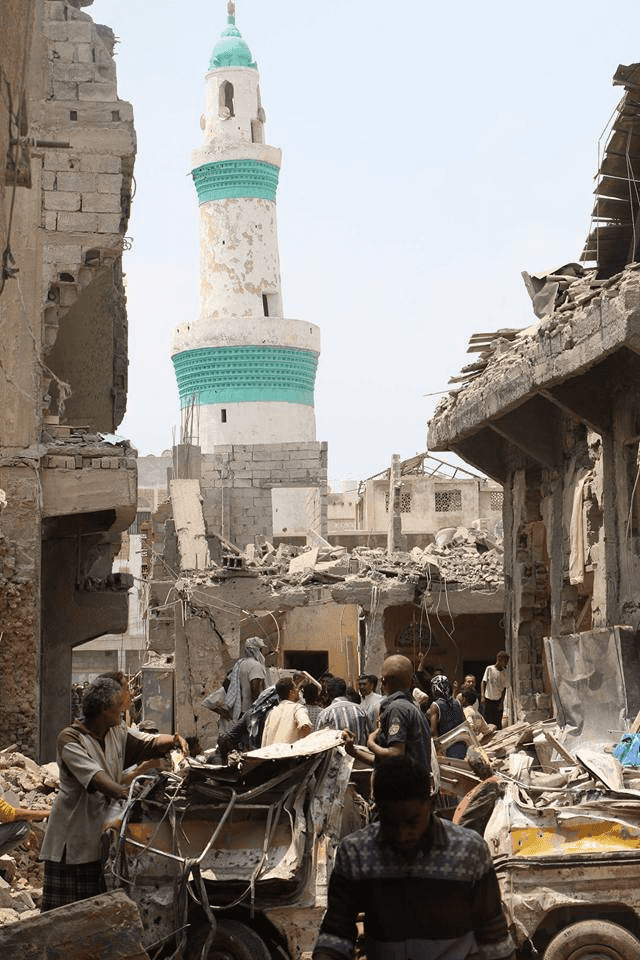 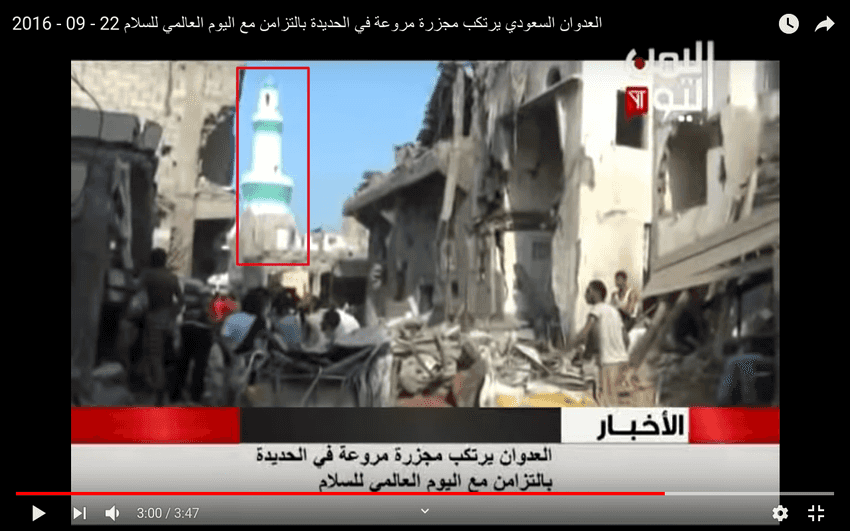 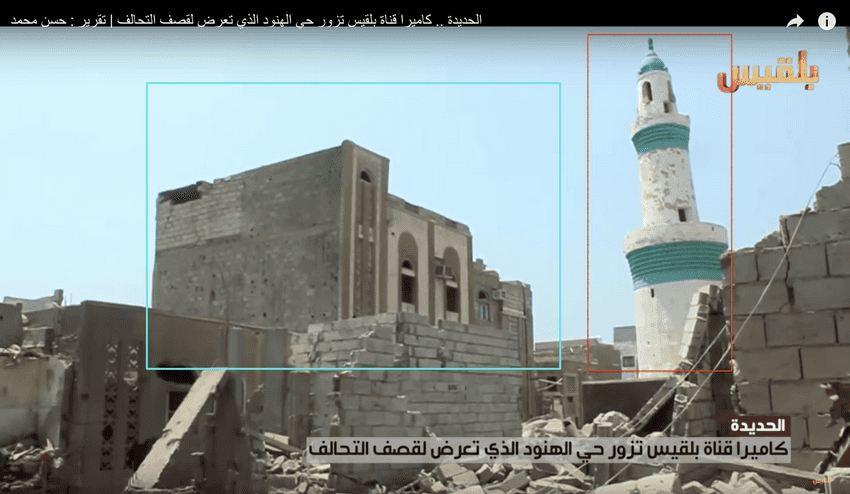 The minaret of Jaishiyyah Mosque appeared again in a video published by Balqees channel, in addition to a nearby building (in blue). 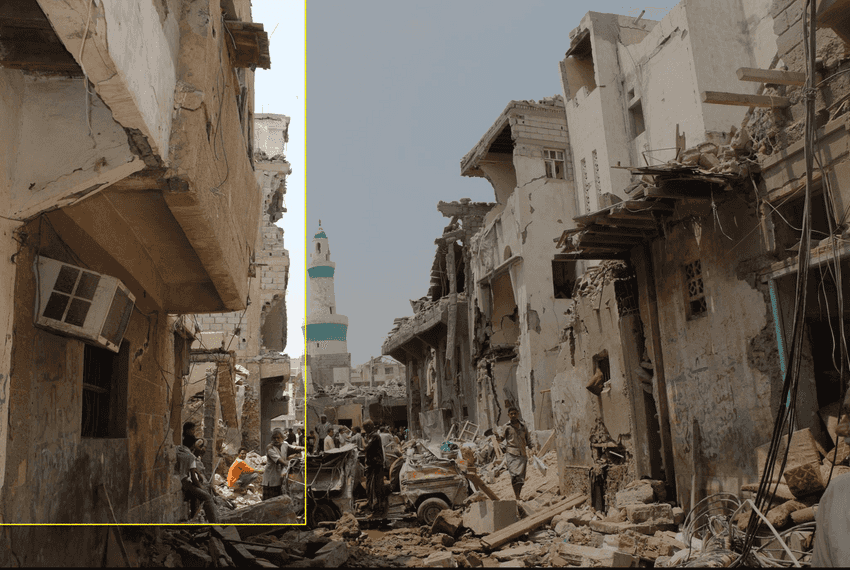 The building that appeared in Balqees channel report near Al- Jaishiyyah Mosque reappeared in a photo published by Karrar Al-Muayyad from another perspective (in blue), in addition to the rubble of destroyed buildings on the opposite side (in black)

Below, photos showing matching between the nightly recorded video which published by Ahmad Abdullah on his YouTube channel and photos of the trail of destruction posted by Waleed Al-Areefi on the “Where is the explosion now” Facebook group 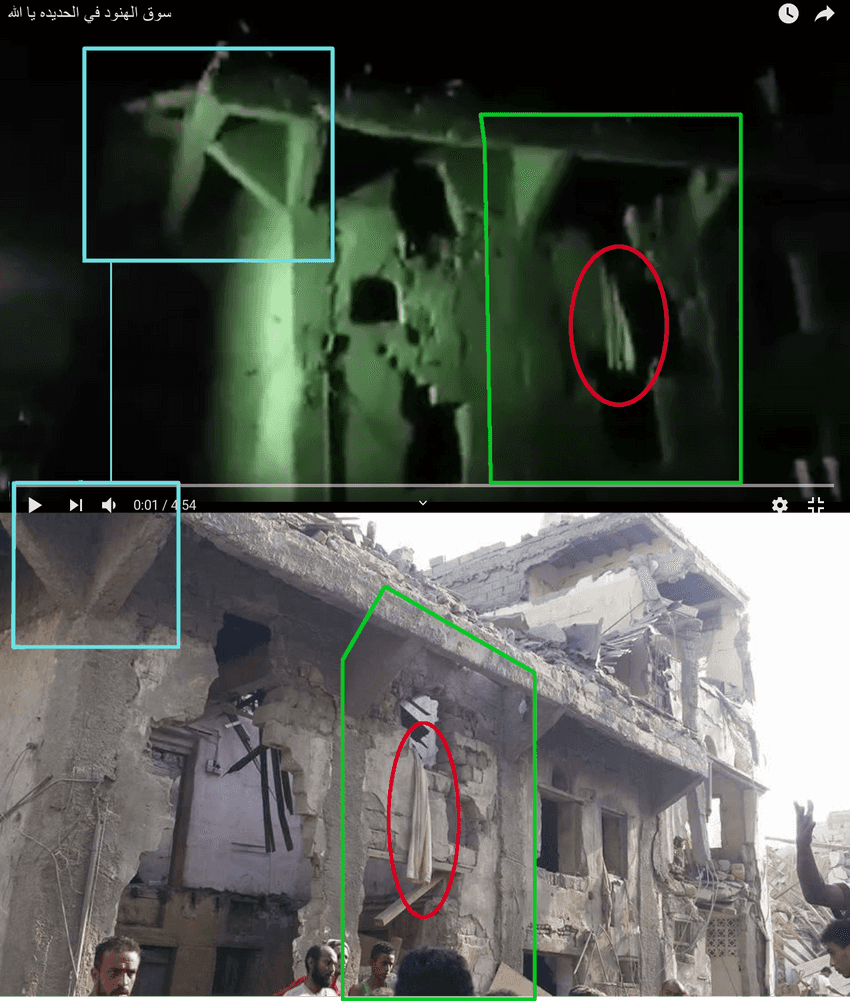 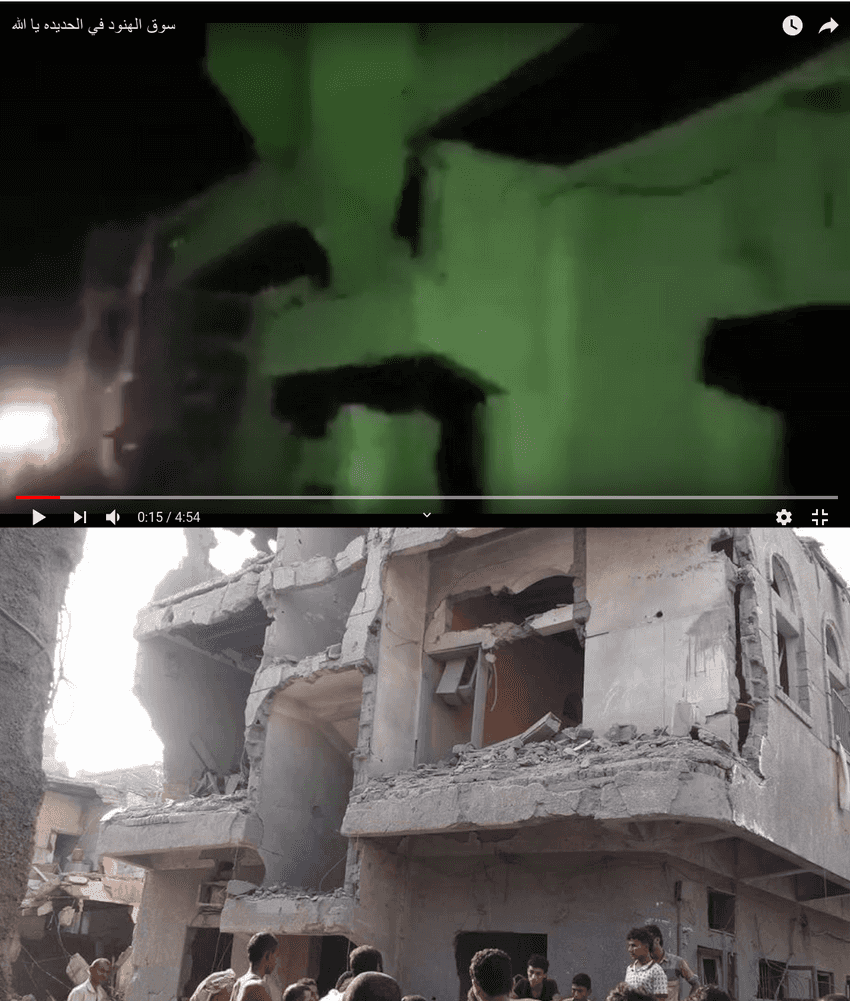 After identifying the marked landmarks, Yemeni Archive evaluated the location of the camera as well as the direction of the photographer (towards the impact site) using Google Earth.

According to reports published about the incident, witnesses statements, and after matching the landmarks appeared in the incident-related visual documents and satellite images, Yemeni Archive was able to determine the location of the targeted buildings in this attack, using Google Maps. 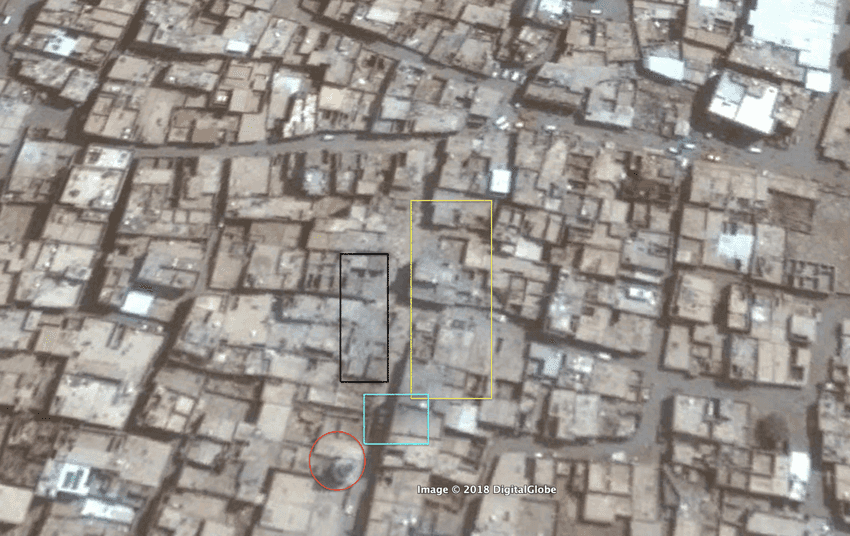 The aftermath of the attack

Impact of attack on buildings and the used weapon

Al-Hunud market neighbourhood is one of the old areas in Al-Hudaydah city. some reports mentioned that the attack on the neighbourhood on 21 September 2016 destroyed more than 20 houses, in addition to damage to the Thawra Hospital and its ambulance as a result of the renewed shelling of the Central Security building, according to the report.

Below, images showing destruction in Al-Hunud market neighbourhood, Source: Waleed Al-Areefi on the Where is the Explosion now group 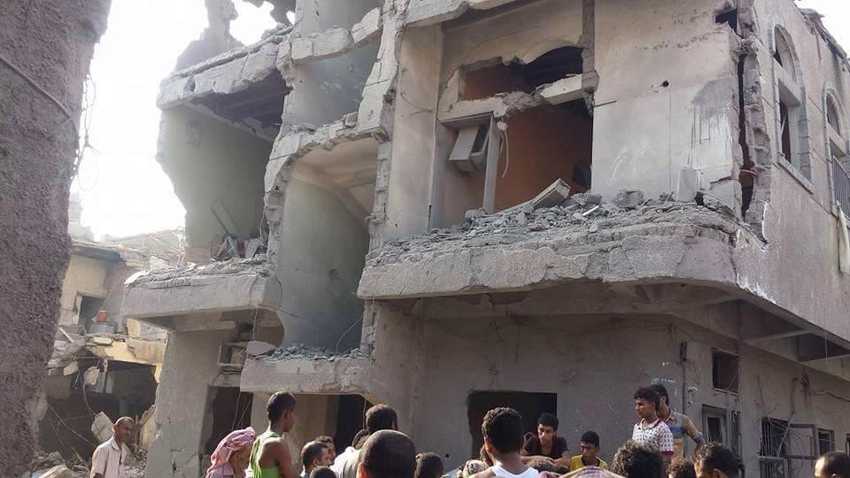 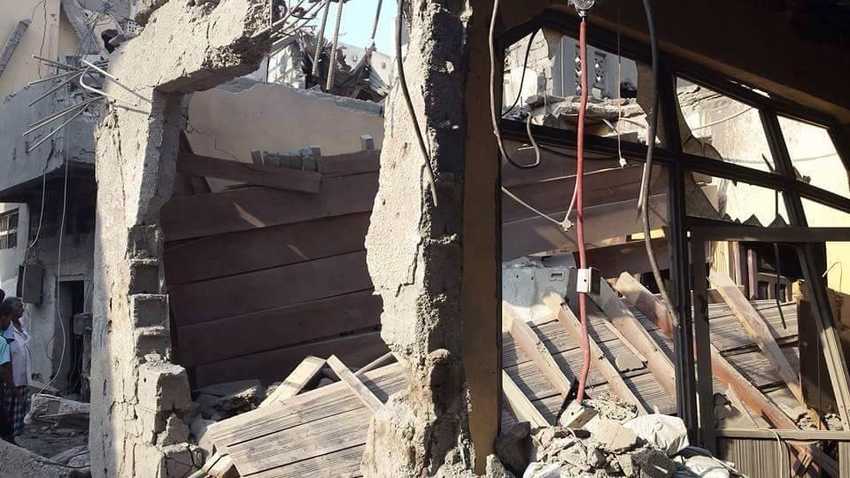 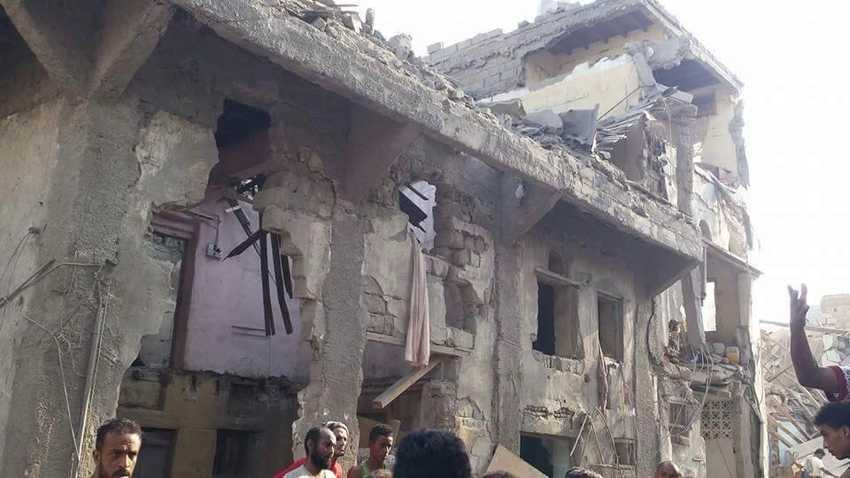 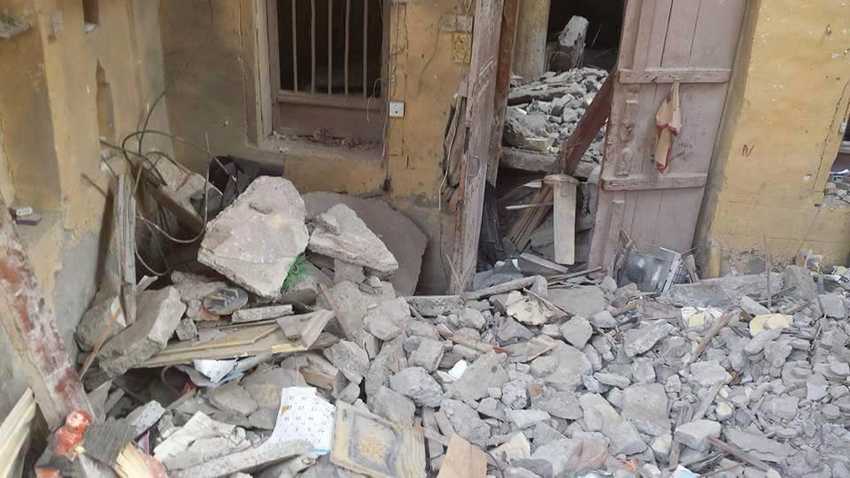 Emad Alhadhri published an image on Facebook showing Al-Hunud market neighbourhood before and after the attack. 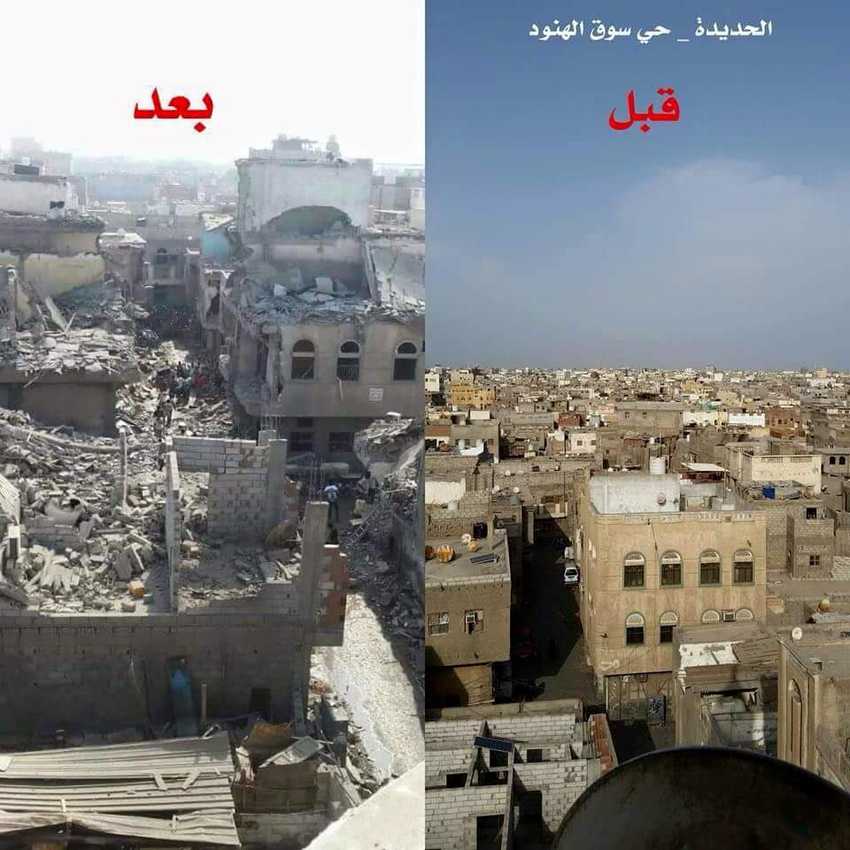 To verify the caused destruction in Al-Hunud market neighbourhood, the Google Earth archive was searched for images of the targeted area before and after the incident.

Below, satellite image published on 28 September 2016 showing damage to buildings as a result of the air strike

To better assess the damage, Yemeni Archive team created 3D images of the buildings that were damaged.

Most of the claims in the news and the visual documents reported that the attack occurred through airstrikes launched by coalition aircraft on several sites, including an airstrike on Al-Hunud market neighbourhood. Yemeni Archive has found a photograph documenting one of the remnants of the munitions used in the attack, but it is not possible to determine its type. However, it is likely to be part of a rocket, which corresponds to one of the testimonies mentioned that a rocket targeted the condolence tent. In the video published by Al-Yemen TV channel, a woman stated at 2:37: “We were sitting in the condolence tent when a rocket hit and destroyed these houses, what is the guilt of the children, the women, and the innocents, what is our fault?” 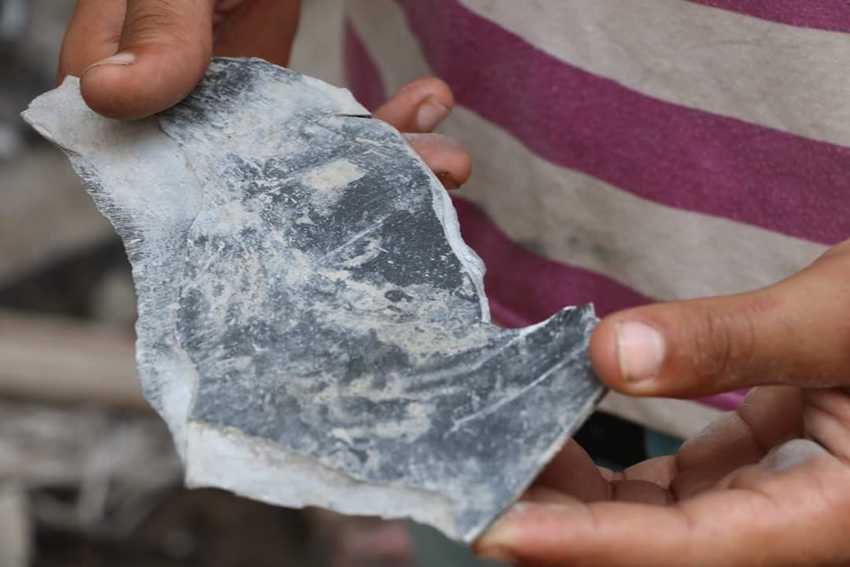 Image showing one of the remnants of ammunition used in the attack, source: Karrar Muayyad 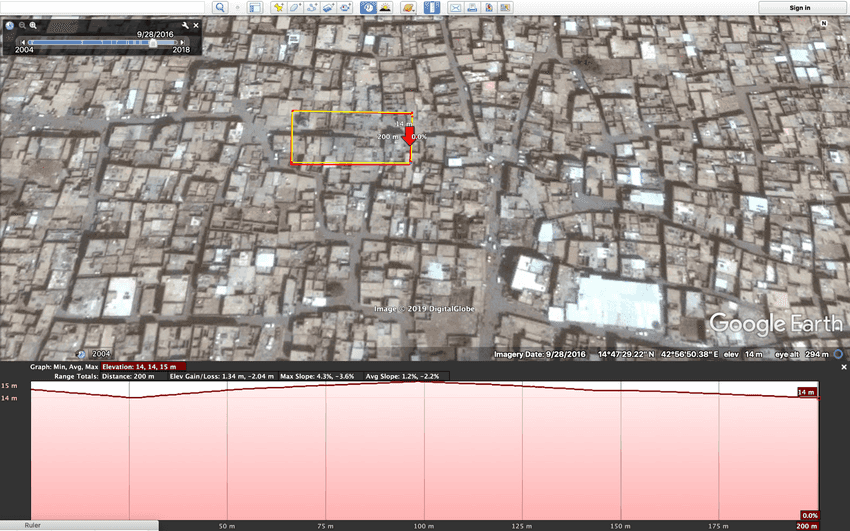 Yemeni Archive used the satellite images to calculate the affected area by the attack, and it was approximately 2,800 square meters. By asking one of the weapons experts. It was observed that the area and the scale of the destruction in the area corresponded to the impact usually caused by airstrikes, as ground or artillery bombing can not cause similar destruction.

Civilian casualties caused by the attack

At 23:38 on 21 September 2016 Al-Khabar news agency published a report stated that on the evening of the same day, Saudi airstrikes targeted a condolence tent in Al-Hunud market neighbourhood in Hudaydah city, resulting in about 90 civilians were killed and injured in an initial death toll, then the report was updated indicating that the number rose to 22 killed and 131 injured according to a statement from a source in the health operations.

The agency quoted a security source as saying that more than 20 bodies arrived at the hospitals of the city, including 13 bodies transferred to Al-Thawra hospital, where Dr. Khalid Suhail, the head of the Al-Thawra Hospital, told Al-Khabar agency that they received 13 martyrs and 76 injured, including 23 injuries were described as “they are in serious condition and need to remain in the hospital” 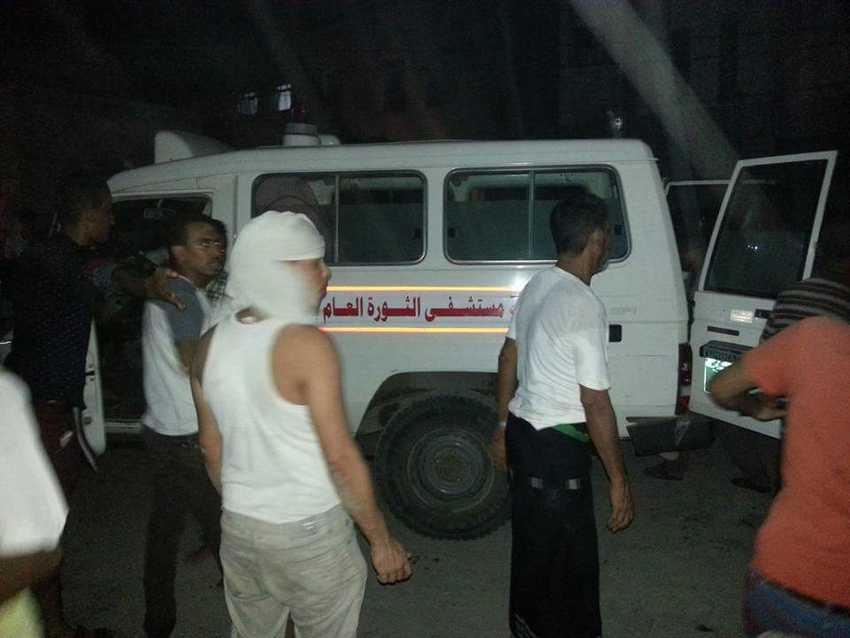 Al-Thawra hospital ambulance in the impact site, source: Bisho Yaqoop on “Where is the explosion now” group

Al-Thawra hospital published a list of the names of the killed and injured who were received in the hospital:

Names of the injured:

Names of the killed:

Below, photos were published on “Where is the explosion now” Facebook group, contain lists of cases received by Al-Thawara Hospital in Hudaydah on 21 September 2016, documenting their names, ages, injuries, in addition to where they came from. According to the report, the hospital received 73 cases, the tables contained 32 names including 12 martyrs, while 50 people left the hospital after being treated. It is noteworthy that 19 of the 20 injuries listed in the table occurred in Al-Hunud market neighbourhood, while one was received from the central security building. 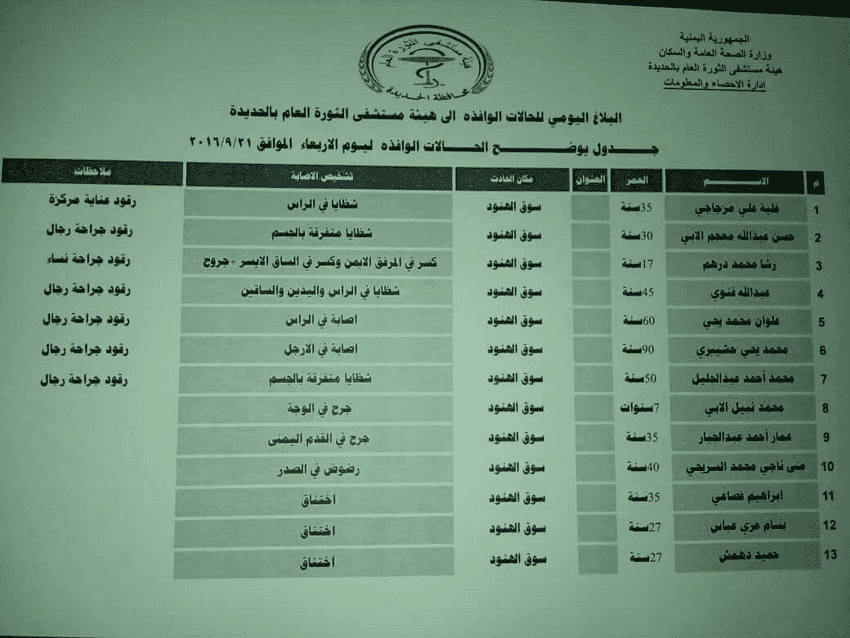 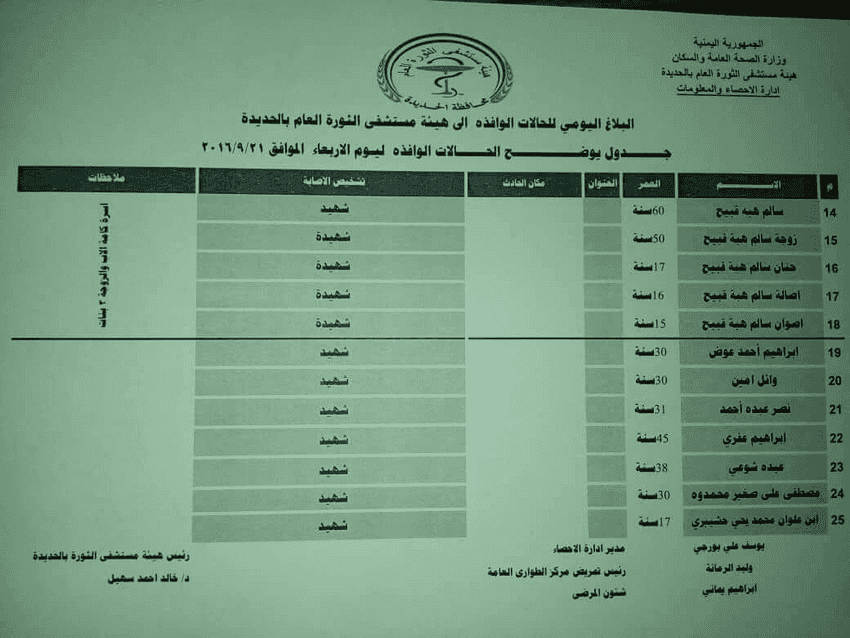 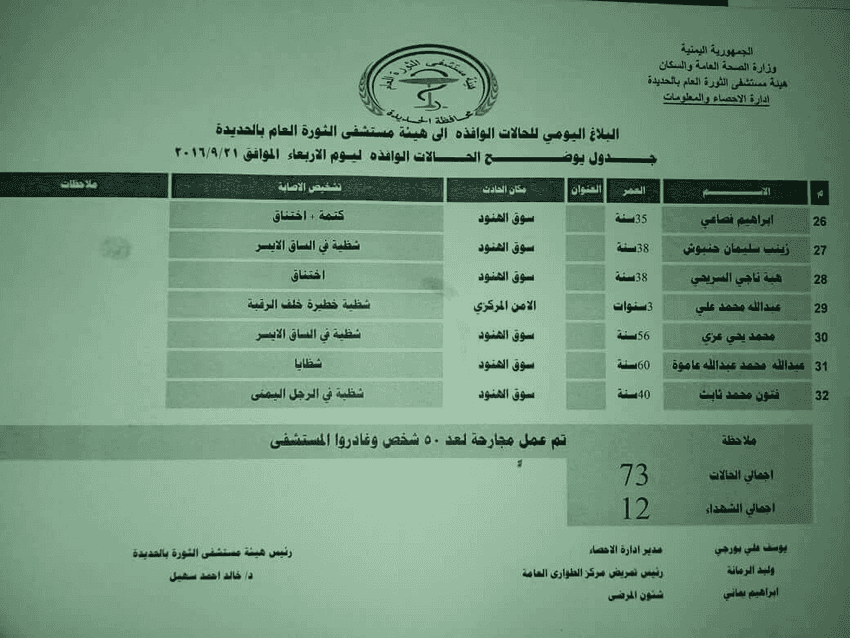 According to the analysed evidence and sources, several air strikes targeted the surroundings of the Republican Palace, the last airstrike took place in AL-Hunud market neighbourhood, where a number of civilian houses were destroyed, resulting in deaths and injuries.

The attack began around 19:00 that day targeting the buildings of the Central Security, Air Defense, and Criminal Investigation. Al-Hunud market neighbourhood was targeted at about 21:00, resulting in 24 killed and 115 injured, including women and children. The nearby civilian buildings were additionally destroyed, as well as damage to ambulances during rescue operations.

Methodology of using tools in this investigation:

This investigation was supported through the MENA-Investigative Fund