Hydan district is located in Sa’dah Governorate, northwest of the capital. Sana’a is approximately 17 km from the Yemeni-Saudi border and since 2015 has been a centre of armed conflict between Yemeni government forces, backed by soldiers from Saudi-led coalition, and Houthi forces. The district includes the Maran region, which is the Houthi forces’ main stronghold. Maran witnessed six wars between 2004 and 2010 between the Yemeni government forces at that time and Houthi forces, following their rebellion led by Hussein Badr Al Din Al Houthi.

On the evening of October 26, 2015, many news sites and local activist social media accounts circulated information that Hydan Hospital in Sa’dah Governorate had been targeted with several airstrikes, which resulted in the injury of a staff member and almost complete destruction of the hospital, which was supported by MSF, who had been operating there for months before the attack. 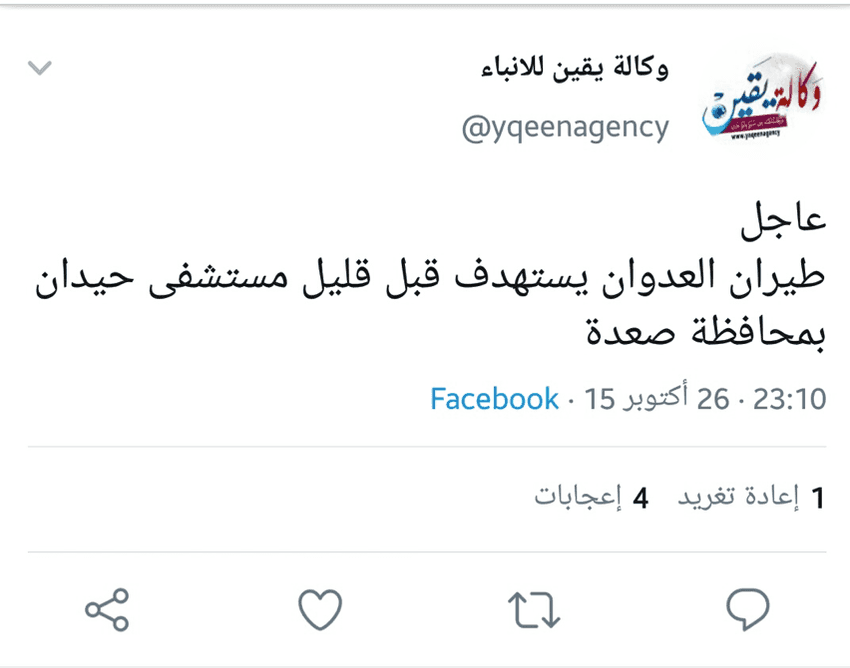 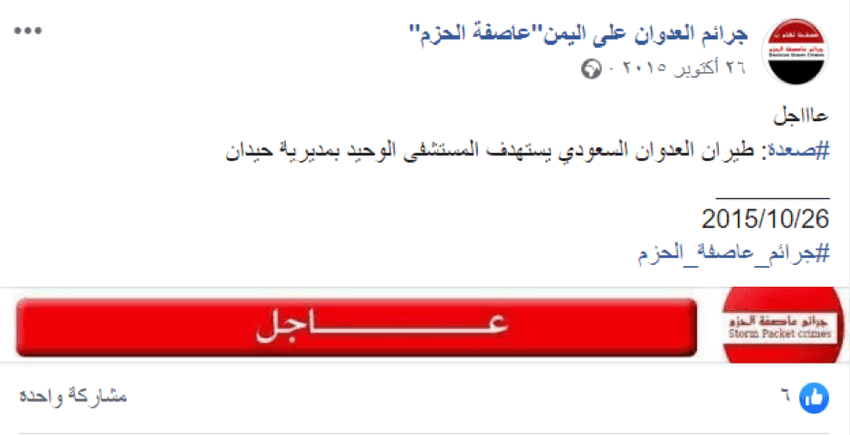 On the following day, October 27, 2015, Human Rights Watch published a report of several airstrikes by the Saudi-led coalition air force targeting Hydan Hospital, which is supported by Doctors Without Borders (MSF). Doctors Without Borders (MSF) has also published a post on their Facebook page stating that one of its hospitals in northern Yemen had been attacked by the Saudi-led coalition air force.

On the same day, Ansar Allah Media Center, a channel belonging to Houthi forces, posted a video on their YouTube channel showing the destruction of Hydan Hospital. In the video, a resident from the area stands in the rubble saying: “This is Hydan Hospital, yesterday the Saudi-led coalition air force hit it with more than four airstrikes and they destroyed it completely. This hospital is the only hospital in the district serving more than 50 villages. This is the only hospital they can receive their health care from.”

On October 28, 2015, the World Health Organization issued a statement condemning the attack.

A paragraph from the Doctors Without Borders (MSF) report 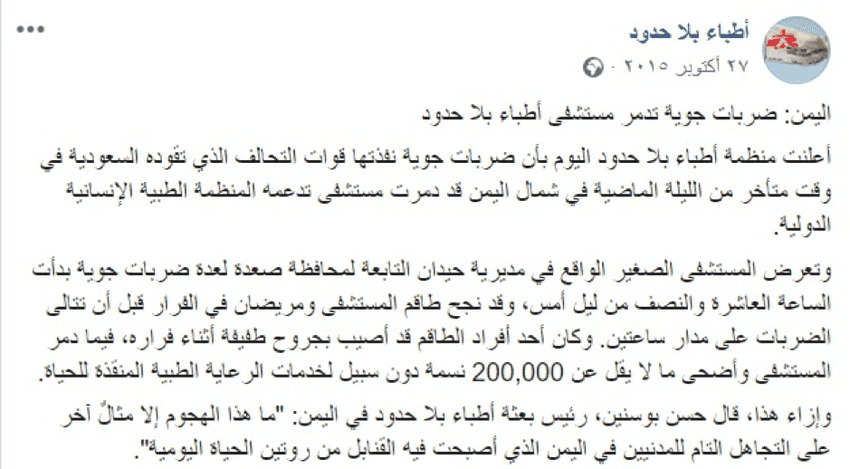 On October 28, 2015, LuaLua TV channel posted a video on their YouTube channel, which was a report of the condemnation by the United Nations Secretary-General Ban Ki-moon of the airstrikes on Hydan Hospital.

On the following day, October 29, 2015, the Yemen TV channel, Houthi forces’ official news outlet, published a video on their YouTube channel of a report broadcast during their news hour. The video shows a number of citizens condemning the attack on the hospital. One of citizens saying: “We condemn and denounce this brutal aggression on Hydan Hospital. Also, it is no secret to anyone that Doctors Without Borders (MSF) is operating in the hospital. [The bombing] was done without consideration that there are humanitarian organisations that are present in the hospital operating under the umbrella of the United Nations to help patients and anyone who needs help in that area.” Another citizen said: “The Hydan rural hospital was targeted yesterday with four airstrikes which led to complete destruction of the hospital, which the French organization Doctors Without Borders (MSF) had been operating for months.”

The attack on Hydan Hospital in Sa’dah governorate in northern Yemen lasted for a two hour period on October 26, 2015. The hospital was attacked with more than four airstrikes. The news of the attack began at 11:00 pm at night local time. The first tweet was by Yqeen News Agency at 11:10 pm. The tweet mentioned that the Saudi-led coalition forces carried out an attack on the Hydan Hospital in Sa’dah governorate. 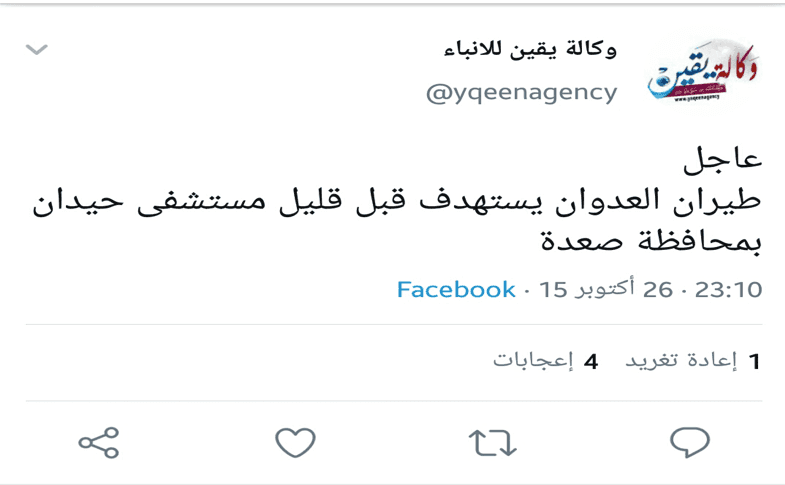 Facebook user Jarallah Fadel published a post on his personal Facebook page at 11:33 pm. Jarallah mentioned the targeting of Hydan Hospital with two airstrikes by the Saudi-led coalition force. In order to add a new layer of verification on the timing of the attack, we analysed the timestamp of the Facebook posts using the 4webhelp tool. The tool showed that the news was published on Facebook at 11:33 pm local time.

In a report on the incident, Amnesty International also stated that according to its own sources on the ground, the attack took place around 11:30 pm, on October 26, 2015.

A paragraph from the Amnesty International report on the incident.

Doctors Without Borders (MSF) said in a statement posted on its Facebook page, that the attack occurred late at night, added: “The small hospital in the Hydan district of the Sa’dah governorate was subjected to several airstrikes that started at 10:30 pm in the evening. The hospital staff and two patients succeeded to flee the hospital before the airstrikes continued for two hours. ”

The location of the attack and its impact

To precisely locate the target site, Yemeni Archive collected and verified visual content related to the incident and identified and compared prominent features within the content and matched it with the satellite images taken of the Hydan Hospital and the geographical environment surrounding it. 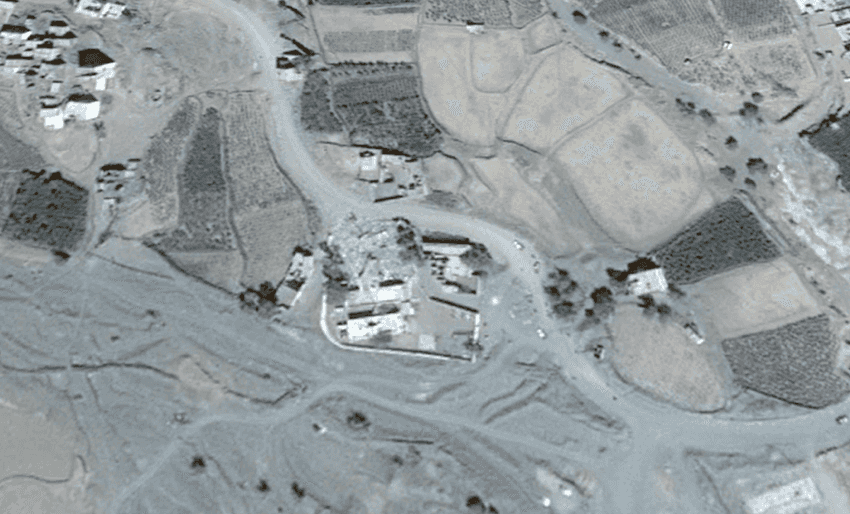 Much of the visual content published online shows images of the building and its surroundings. In the pictures below, a building marked in red is located near the site of the hospital that was attacked. Next to it is a building marked in yellow. After comparing the satellite images with the features shown in the video published by Houthi forces Media Center channel on YouTube, and photos from the Yemen War Crimes website, we noted a match between the contents of the video and details in the geography at that same location. 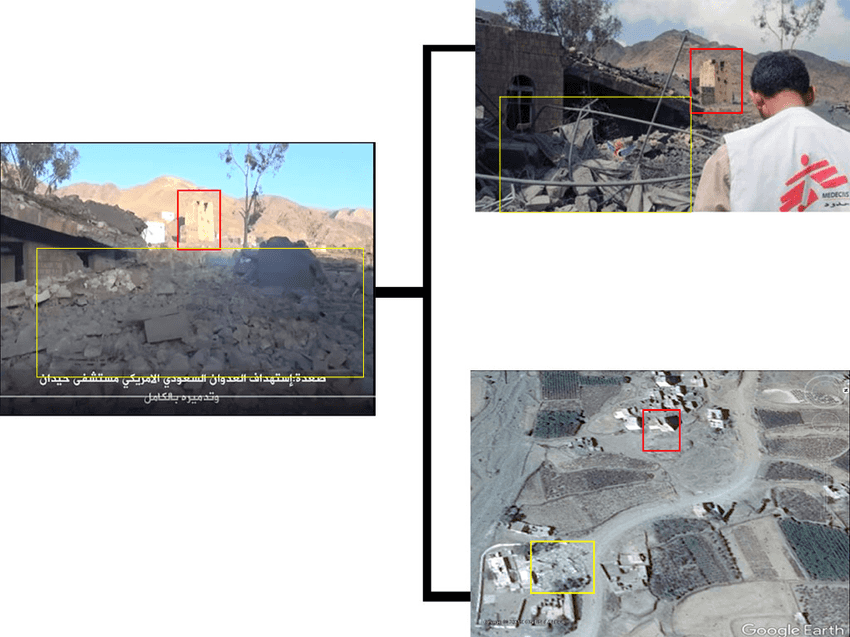 Below is another still image taken from the same video video compared with a satellite image of the hospital. 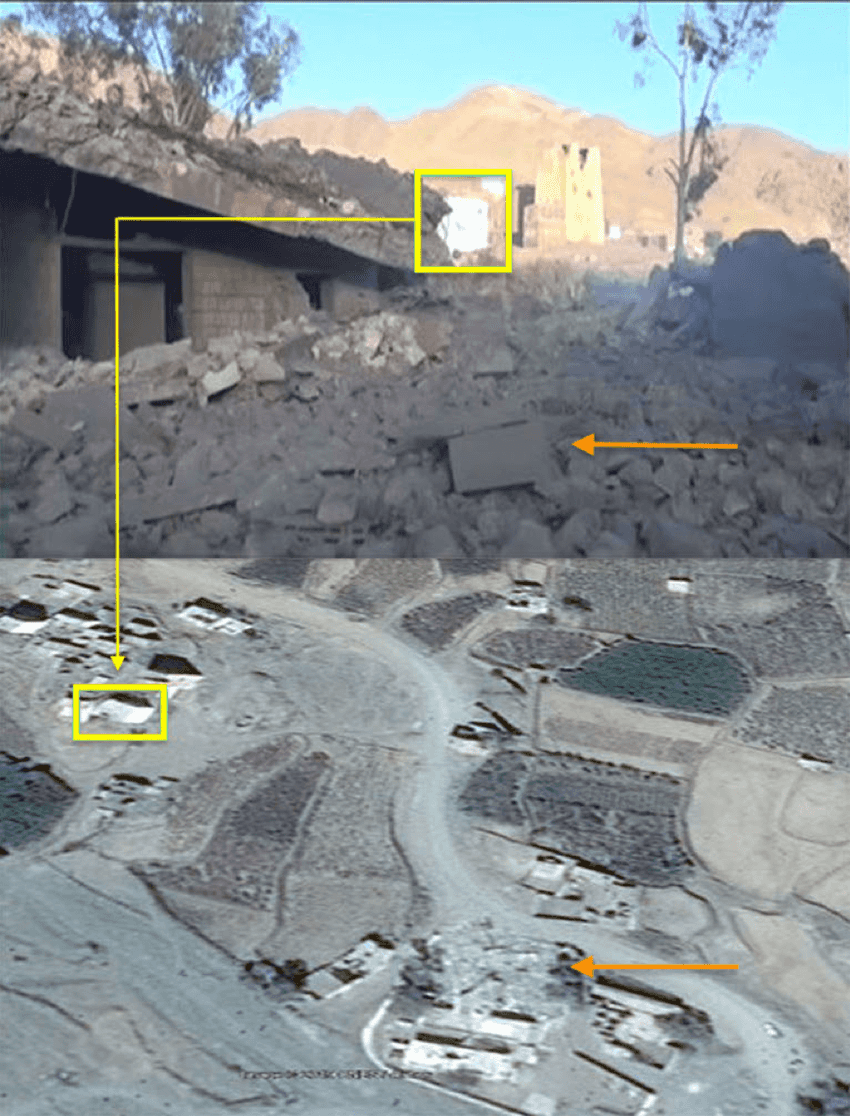 The video shows a building near the destruction and a number of trees showing around the area. It is also possible to conclude that the terrain shown in the video matches the location using the Google Earth Pro tool. 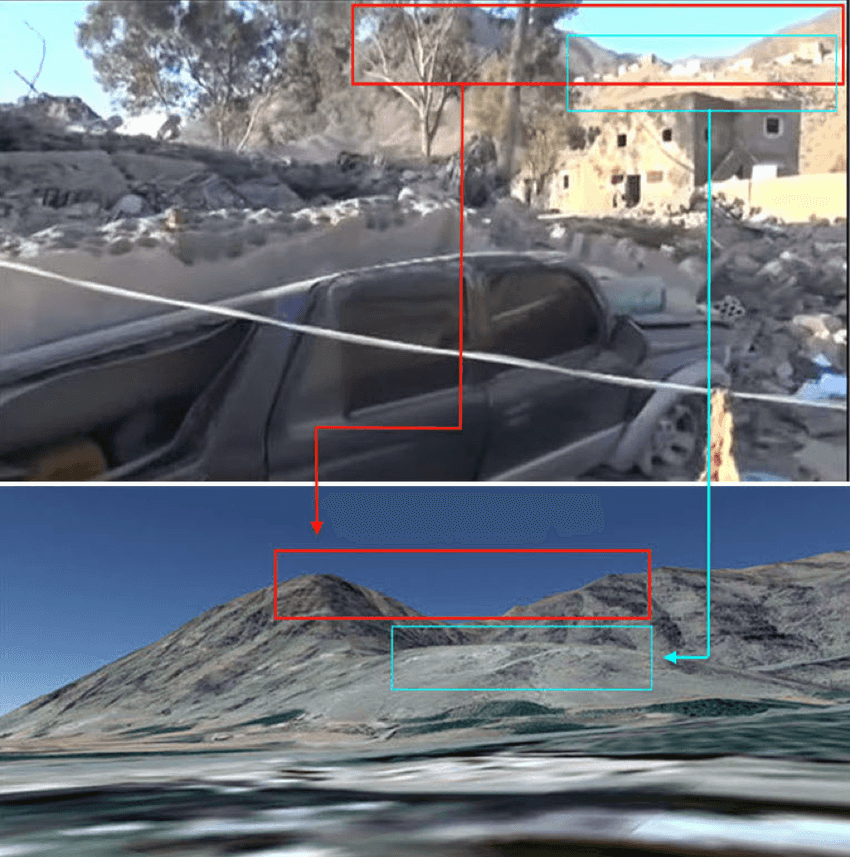 A still image taken from the video posted by Issa Atef, the General Director of the Media Office in Sa’dah Governorate on his YouTube channel, also shows the buildings next to the hospital. The picture was compared with the hospital’s satellite image using Google Earth Pro tool and shows a match. 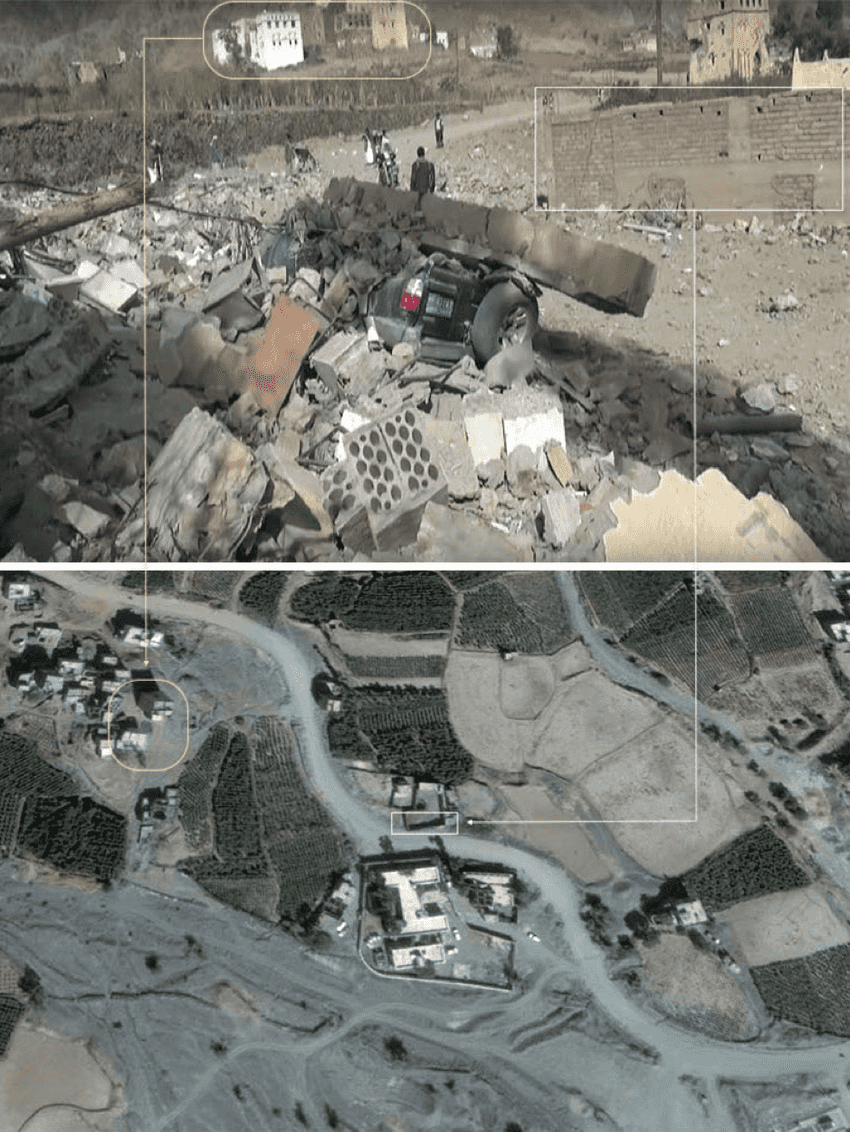 A still image taken from a video published by Yemen channel on their YouTube channel shows the hospital entrance after the attack, adding another layer of confirmation. 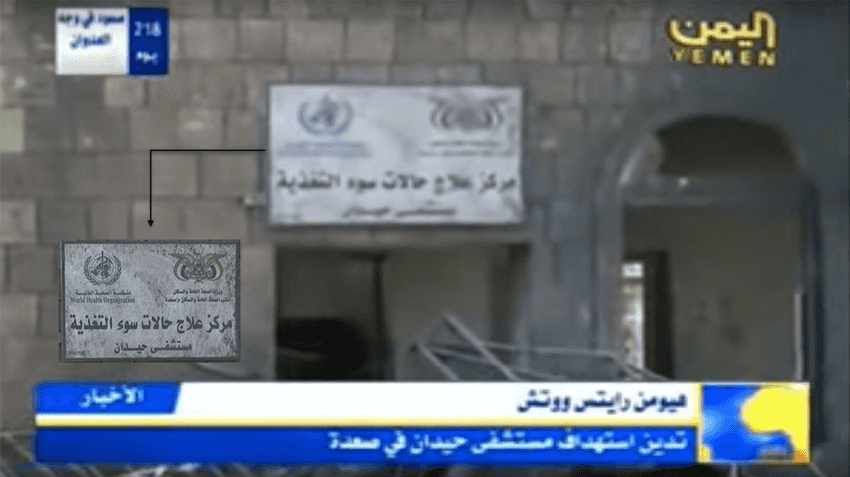 Most local and international agencies stated that the Saudi-led coalition airstrikes had almost completely destroyed the Hydan Hospital, including its medical departments which went out of service. The attack prevented about 200,000 people in four districts from receiving health care, since the hospital is the only medical center in the region.

A video published by Houthi forces Media Center channel on YouTube shows some of the damage on hospital. 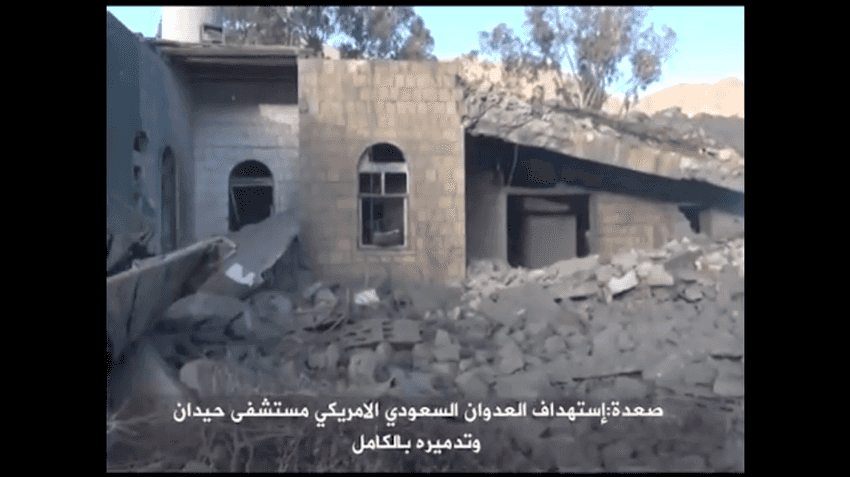 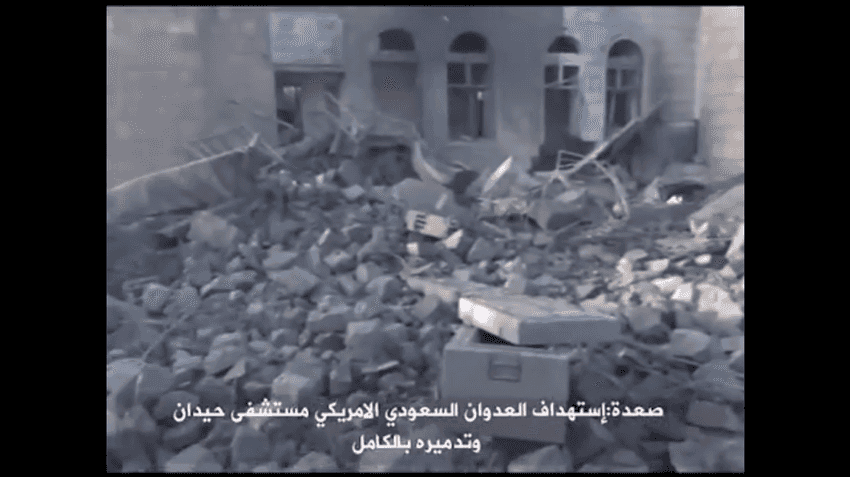 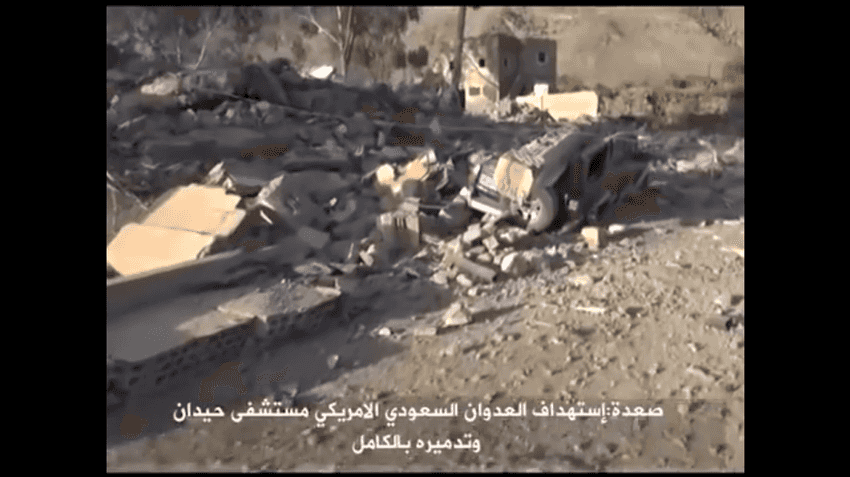 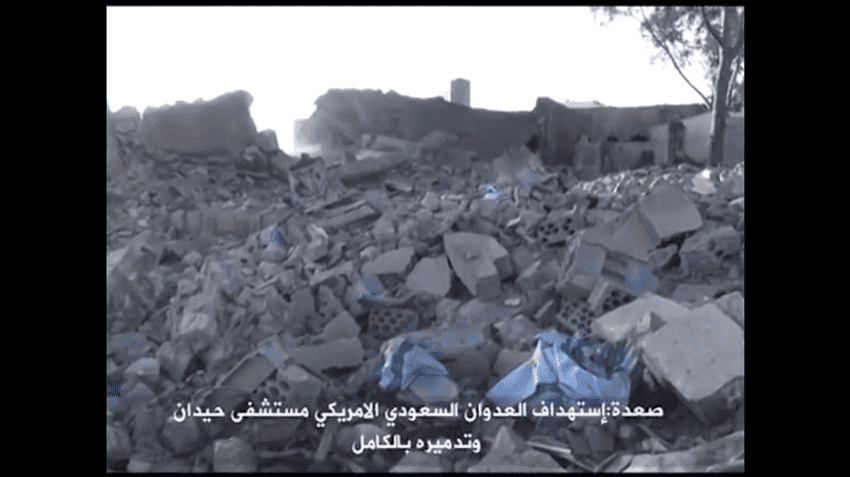 A photo taken from the video published by Issa Atef, the General Director of the media Office in Sa’dah Governorate on his YouTube channel, showing the impact of the attack from inside the hospital. 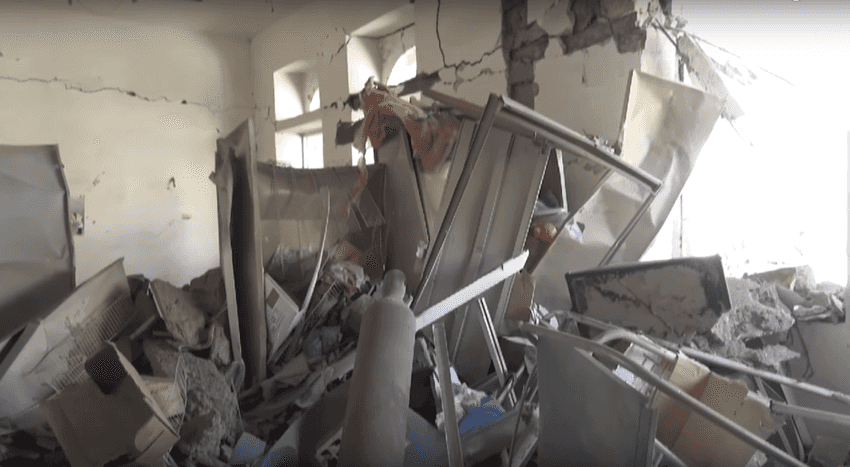 To add a new layer of verification to the level of destruction at Hydan Hospital, Yemeni Archive searched the Google Earth archive for images of the targeted area before and after the incident. The image below shows the aftermath destruction in the location. 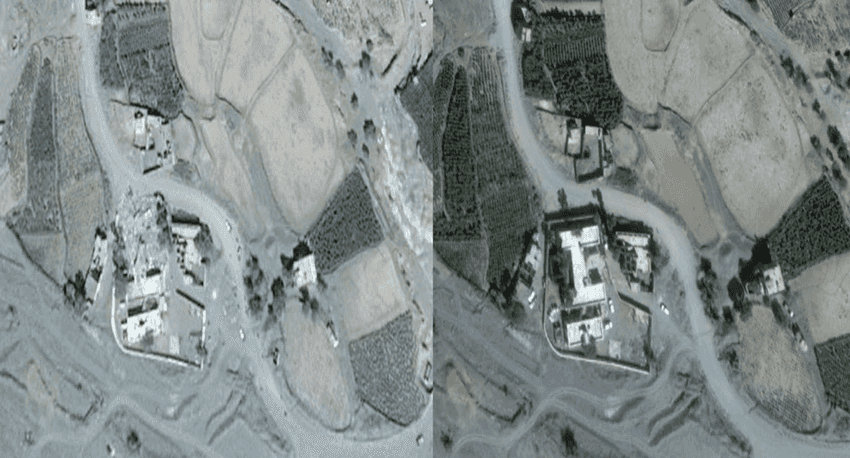 Yemeni Archive also found satellite images showing a number of buildings close to the targeted location, which were completely destroyed. This reveals that several airstrikes took place in the area. Google Earth scale shows that the attack site was 240 square metres, including the Hydan Hospital.

Responsibility for the attack

Most of the allegations in the statements of international organisations and in news articles and videos published online stated that airstrikes on Hydan Hospital were carried out by the Saudi-led coalition forces. The organisation supporting the hospital, Doctors Without Borders (MSF), also confirmed in a statement that the attack was carried out by airstrikes that lasted for two hours. Amnesty International stated in a report that “According to sources on the ground, at around 11.30 pm on 26 October, Saudi-led coalition forces allegedly carried out up to six consecutive airstrikes on Hydan Hospital.” A testimony by one of the residents in the area that was published in one of the videos posted on YouTube, saying: “The Hydan rural hospital was targeted with more than four airstrikes, leading to the destruction of the entire hospital. This is the only hospital in the district, serving more than 50 villages. This is their only hospital they receive their health care from.”

The UN Secretary-General Ban Ki-Moon also accused Saudi-led coalition forces of targeting the hospital. The Saudi Permanent Representative to the United Nations denied that the coalition forces led by his country carried out the airstrikes.

Yemeni Archive did not find any visual content that determined the type of weapons used. Yemeni Archive relied on the satellite imagery to determine the area which was damaged as a result of the attack of the Hydan Hospital on October 26, 2015, which was approximately 1,225 square meters. Through consultations with a weapons expert, it became clear that the area and extent of the destruction in the hospital corresponded to the effect usually caused by airstrikes, as ground or artillery strikes could not cause similar damage.

Victims of the attack

Information differed about the number of victims killed in the attack on Hydan Hospital. Doctors Without Borders (MSF) supporting the hospital said in its statement: “Hospital staff and two patients managed to escape before subsequent airstrikes occurred over a two hour period. One staff member was slightly injured while escaping.” Amnesty International’s statement stated: “The hospital had more than 20 people inside at the time, including three patients and various medical and other staff members. Seven staff members were injured, but could not be taken to another hospital 60km away in Sa’da until 7:00 am due to fears of further strikes.” The health office in the Hydan Hospital did not specify the number of casualties and just mentioned that a number of people were injured, with medium injuries.