Attack on the Equestrian Pavilion in the Military academy of Sana'a

On March 30, Sana’a city witnessed several airstrikes carried out by the Saudi-led coalition. According to various sources, several shells hit a horse stable in the Equestrian Pavilion within the Military academy north of the city. The attack killed horse trainer Mahdi Ali Al-Rimiwas, injured two horsemen, as well as killed/injured seventy horses in the Pavilion.

After gathering, verifying and analysing visual content published on social media and news networks, Yemeni Archive was able to determine the type and source of the weapon used to target the hangars of the Equestrian Pavilion that day. From interviews with injured victims and eyewitnesses as well as after analyzing social media posts and utilizing visual time estimation techniques the Yemeni Archive was able to confirm that the attack occurred between 12:50 and 13:25 pm local time.

The Equestrian Pavilion of the Military academy in northern Sana’a was targeted by three airstrikes in several air raids carried out by the Saudi-led coalition on separate areas of the capital city Sana’a and other surrounding provinces. Colonel Turki al-Maliki described in a statement to the Saudi Press Agency (SPA) that these airstrikes were a part of a qualitative operation against military targets in areas controlled by the “Ansar Allah” Houthi group. Concurrently, Anadolu news agency and Russia Today published additional reports on the attacks quoting a Houthi military source. According to the source, warplanes of the Saudi-led coalition launched airstrikes on the Sana’a governorate targeting the Military academy, Al Daylami airbase, and the nearby Sana’a International Airport as well as the areas of Al-Hafa, Atan, Nahhadin, and Tebah TV.

According to Yemeni Press, the airstrikes also targeted the northern Al-Jah District in Beit Al-Faqih District, Al-Mansri City in Al Hali District, northwest of Al-Shaab City, the quarantine center in the Al-Salif District in Al- Hudaydah Governorate, and the communication towers on Kamran Island. According to other local news sources, several airstrikes additionally targeted the border areas in Saada Governorate, Al Marib, Al-Jawf and Amran.

A paragraph from the published piece by Yemeni Press

The March 30 attack is not the first on the Military Academy’s horse stables. A report published by Belqees TV, on Equestrian Sports in Yemen, stated that Saudi-led coalition warplanes targeted the stable at the end of August 2016, killing four horsemen, a trainer, and a number of horses.

Satellite imagery between July and September 2016 of the Equestrian Pavilion shows a building damaged potentially from the attack,  further corroborating the information provided by Belqees TV.

The Equestrian Pavilion, which is one of multiple pavilions at the Military Academy, is located in the Al-Rawdhah neighborhood of the Bani Al-Hareth District, north of the secretariat of the Yemeni capitalSana’a, and is located about seven kilometres from Sana’a International Airport.

The Military Academy is among the most targeted sites by the Saudi-led coalition. With the coalition’s involvement in Yemen beginning in March 2015, satellite imagery of the Academy and surrounding areas shows the extensive destruction of continuous shelling to a large majority of Academy buildings. Standing 500m away from the nearest military site, the Equestrian Pavilion is vulnerable to attacks. 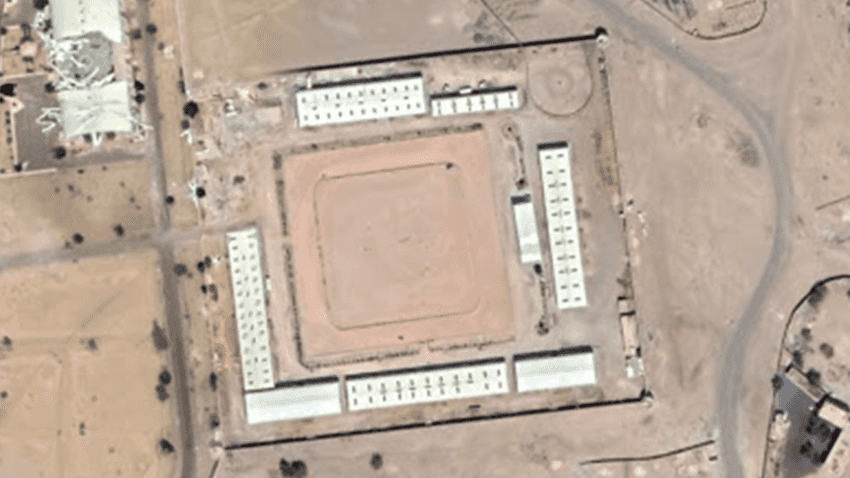 Determine the timing and sequence of events

On Monday March 30, 2020, several news sites and social media accounts circulated information reporting intense airstrikes by Saudi-led coalition warplanes on separate locations in the capital, Sana’a, including the horse stable at the Military Academy. According to initial assessments, the attack killed and injured three people and about seventy horses.

News began circulating about the incident moments after the bombing as Nabaa news agency’s Twitter account tweeted at 13:23 local time of three airstrikes on the Military Academy launched by Saudi-led coalition warplanes. Where’s the explosion now?’s Facebook account posted at 13:27 local time news of an attack on the Military Academy by an airstrike or a series of airstrikes reportedly launched by Saudi-led coalition warplanes. 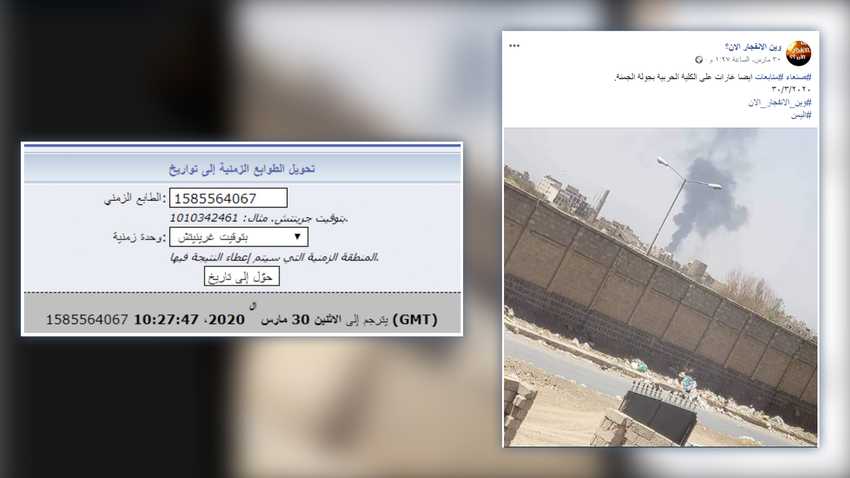 On the same day, Sabaa News Agency published on its official page news on the statement issued by the temporary committee of the Equestrian Federation. According to Sabaa News, the Federation confirmed  the incident by the Saudi-led coalition and condemned the attack.

Several News channels mentioned it in their TV reports and broadcasts featuring various footage of the destruction caused by the airstrikes. Al-Masirah TV published a video on its YouTube channel, which referred to the bombing of the Equestrian Pavilion. They additionally published a longer video titled “The full scenes of the crimes of aggression targeting the horse stables in the Military Academy.” In this report, footage shows the moment of the attack, the destruction of the Equestrian Pavilion, and interviews with eyewitnesses.

The Yemeni Archive interviewed two witnesses injured in the attack. Khaled Shaleel (35 years old), a soldier working in the Pavilion, and his nephew Asad Ahmed Shaleel (13 years old) recall the attack beginning while they were having lunch on the afternoon of March 30. According to Khaled: “we went to lunch after midday prayers, but we were not allowed to gather because of an attack that bombed Sanaa airport. We just started eating when we got bombed. Me and my nephew Asad tried to flee, but shrapnel hit me in my left foot.”

Asad Ahmed Shleel, a cadet in training, said: “as we were getting ready for lunch, a plane started shelling, I was very afraid and tried to escape with my uncle.”

The testimonies of Khaled and his nephew Asad Ahmed Shalil, in addition to the timestamp of the social media posts, the use of the shadow calculator, and the analysis of the shadow shown in the videos, indicate that the timing of the incident was between 12:50 and 13:25 local time on Monday afternoon, March 30, 2020. 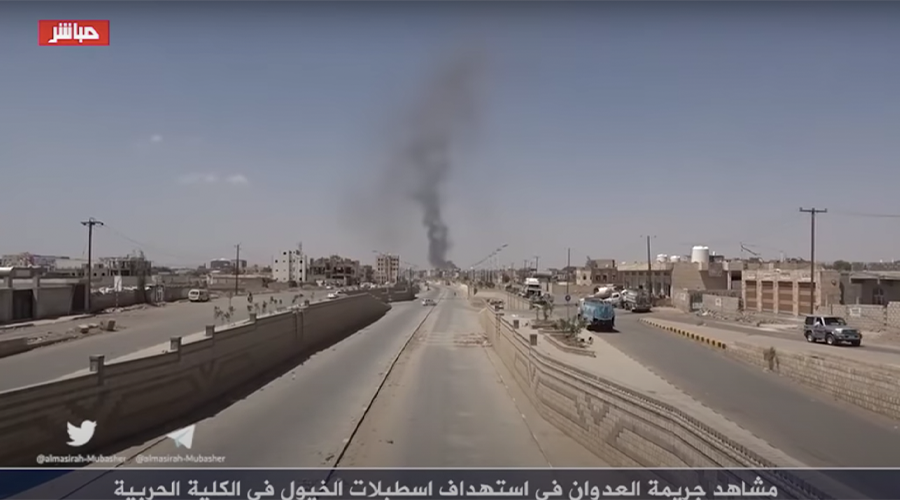 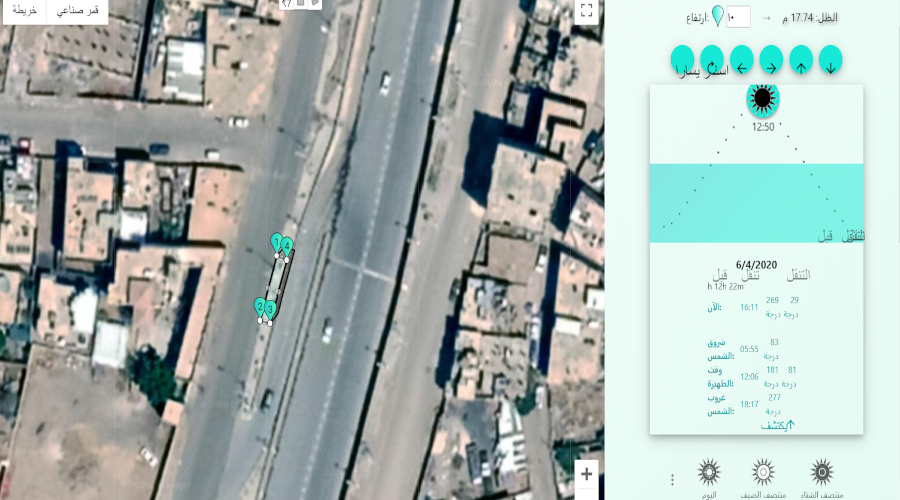 In addition to Asad and Khaled, Yemeni Archive conducted several field interviews with people near the Pavilion at the time of the attack. Daoud Ali Al-Rimi was amongst those interviewed. Al Rimi is a veterinary assistant at the stables and is the brother of Mahdi Ali Ali-Rimi, a coach at the Pavilion killed in the attack Mr. Daoud Ali Al-Rimi recounted that the day of the attack he woke up to the sounds of explosions, “if it had not been for the shrapnel flying towards me, I would not have believed it. I did not expect it to be shelling sounds, I thought it was an Earthquake. I never imagined that this place would become a target for Saudi-led coalition warplanes.” Then, he added, “after I got out, another missile hit, and a third one hit the hay warehouse where my brother was sleeping. I rushed to the warehouse, but my colleagues stopped me till the bombing stopped. When I entered, I was shocked to find my brother split in half. My brother Mahdi was a father to seven children and he hadn’t seen his family for nearly a year.” 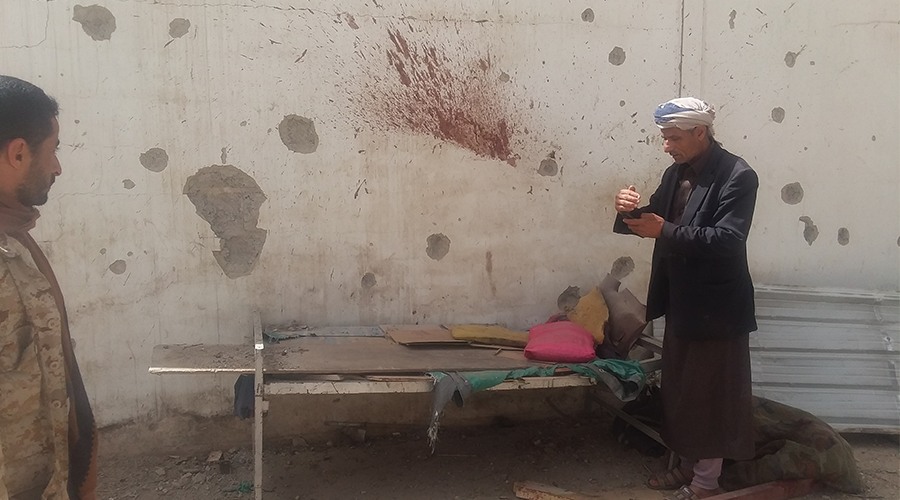 A picture of the bed that Mahdi Ali Al-Rimi was lying on when the attack happened, and the blood marks on the wall. 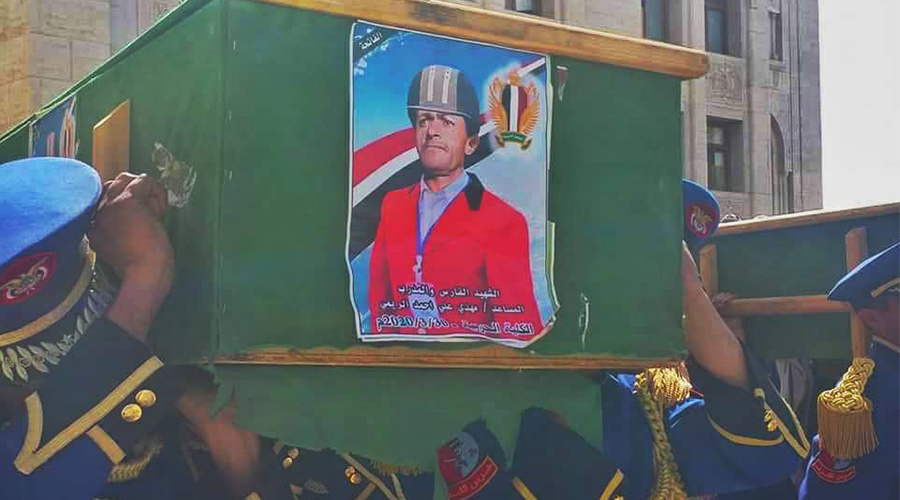 Al-Azi Mohammed Hussein, a worker at the stables, told Yemeni archive: “the warplane bombed during lunchtime, and the other two airstrikes hit after we left. We stopped gathering during lunchtime, after we had received orders not to gather, due to the bombing on Sanaa airport a few hours before the attack.”

According to Al-Azi: “the warplane targeted the horse’s stables, then the clinic, the warehouse and the stage.” He added: “after the bombing stopped, we returned to help our injured colleagues and check on the horses. This is not the first time that the Military Academy was targeted. Many of its buildings were destroyed before, but this is the first time that the horse’s stables were targeted.”

Dr Jalal Al-Yousifi, a veterinarian in the Cavalry Wing of the Military Academy told Yemeni Archives: “it was very tragic, a heartbreaking scene, and what makes it more painful is that the structure here is not prepared to save what can be saved of the horses, it’s so tragic to know that after we have lost 70 of the horses, numbers could increase. These horses were one of the best Arabian horses in Yemen.”

Analyzing the destruction from the outside and inside

To analyze the scale of the damage caused by the attack at the scene of the incident, Yemeni archive documented from on the ground the destruction at the target site, collected online content published by TV channels and social media sites, and analyzed these videos and photos comparing it with the damage shown on satellite imagery of the Equestrian Pavilion.

Well before the attack, on June 23, 2019, a local news site published a story with photos of Equestrian Federation officials visiting the Equestrian Pavilion at the Military Academy. These photos reveal the interior features of the Pavilion and were used to evaluate the extent of damage sustained by the Pavilion. Yemeni Archive compared these older images with the visual content taken on the ground and gathered online. 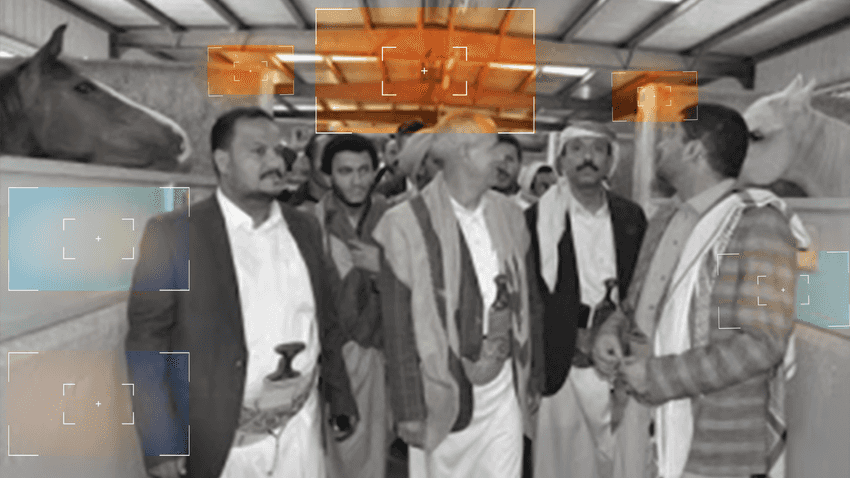 To precisely locate the targeted horse stables, Yemeni Archive compared the distinct landmarks that appear in a video published on YouTube by Al Masirah to photos taken by Yemeni Archive team. These images, including the terrain around the Pavilion, were additionally compared with satellite imagery and geolocated. 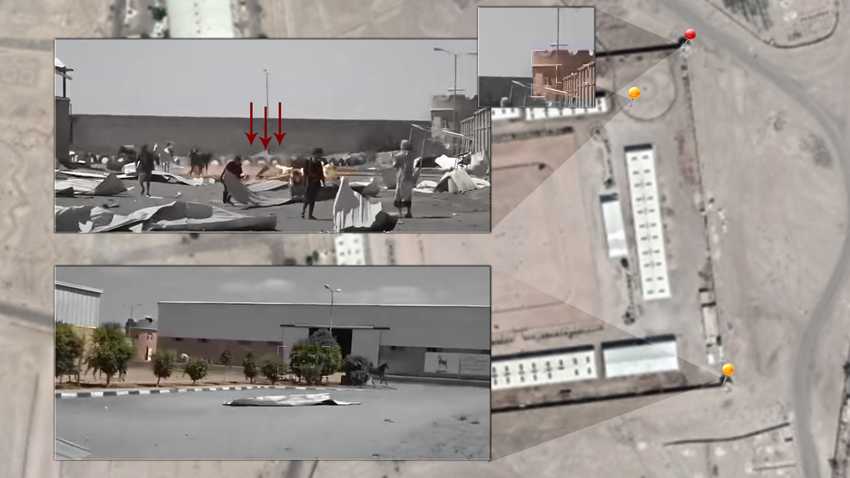 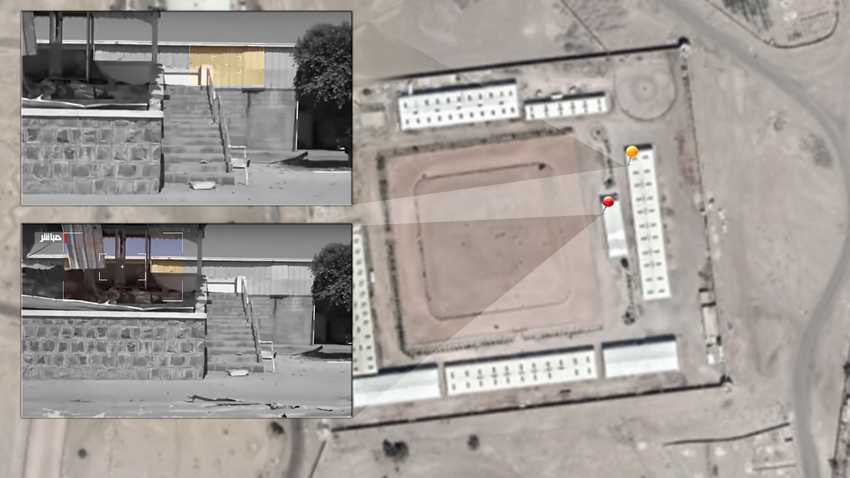 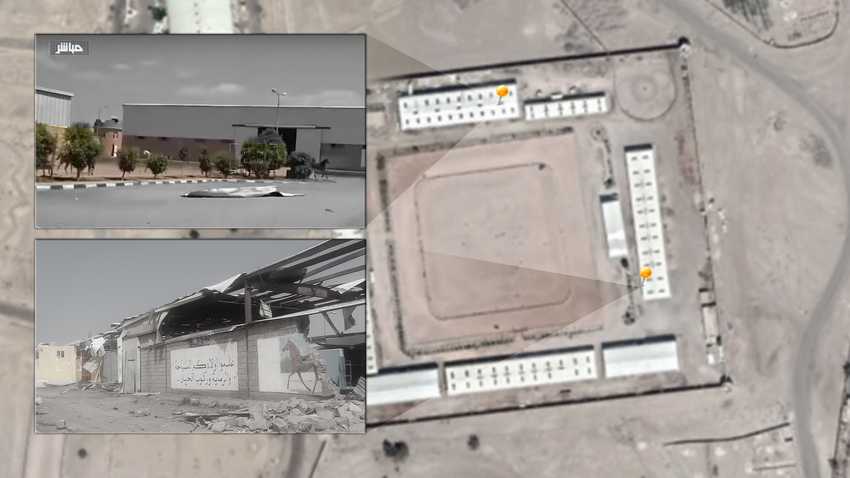 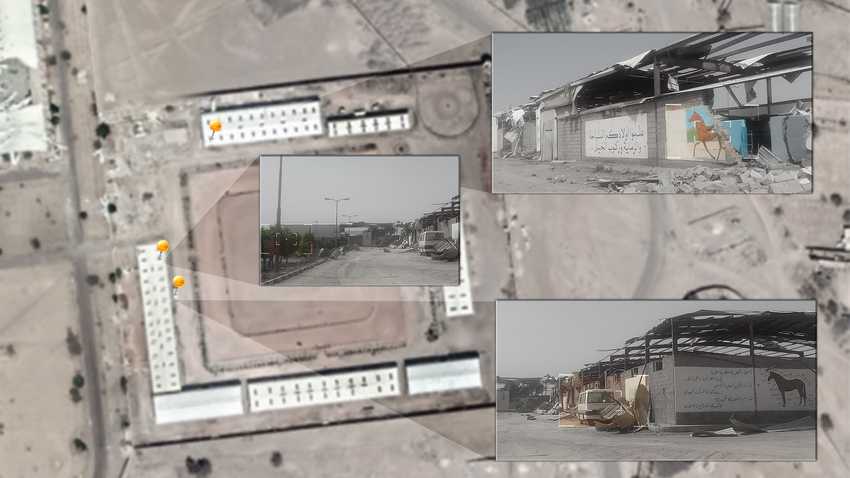 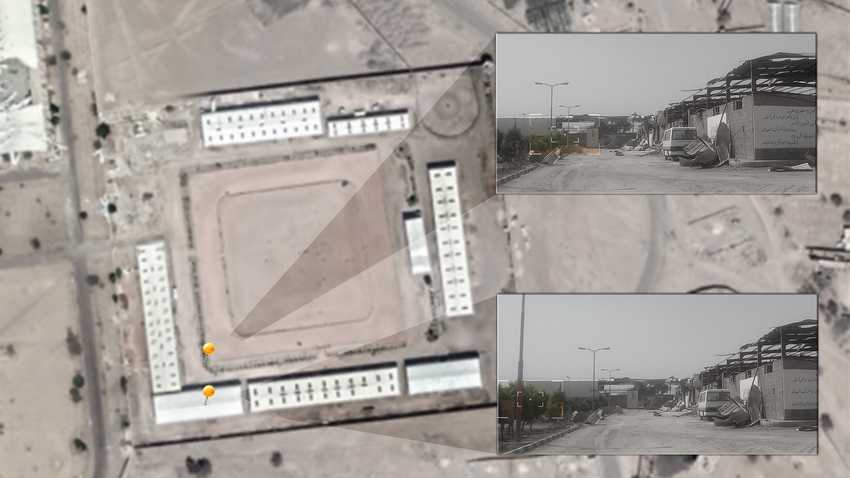 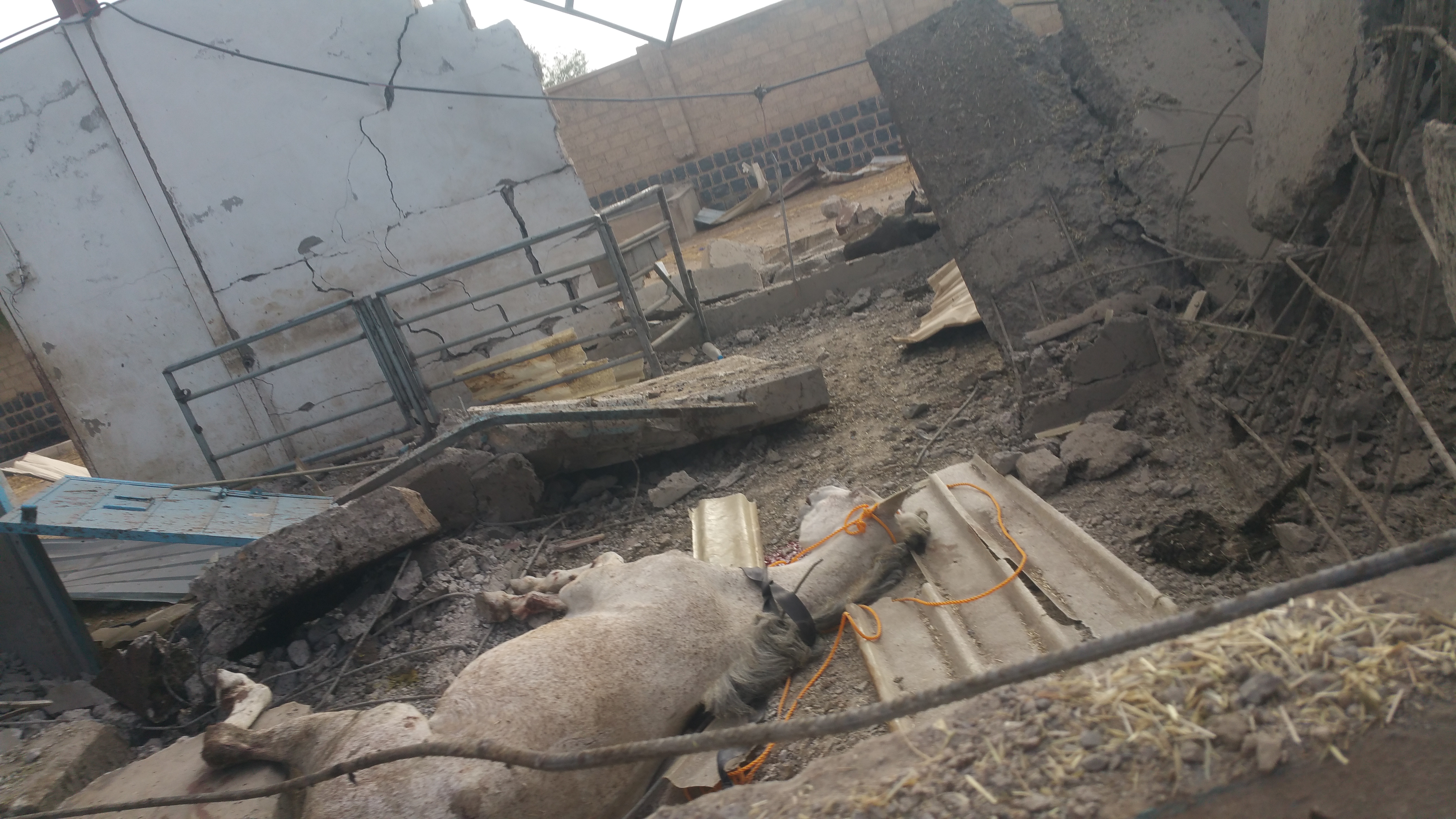 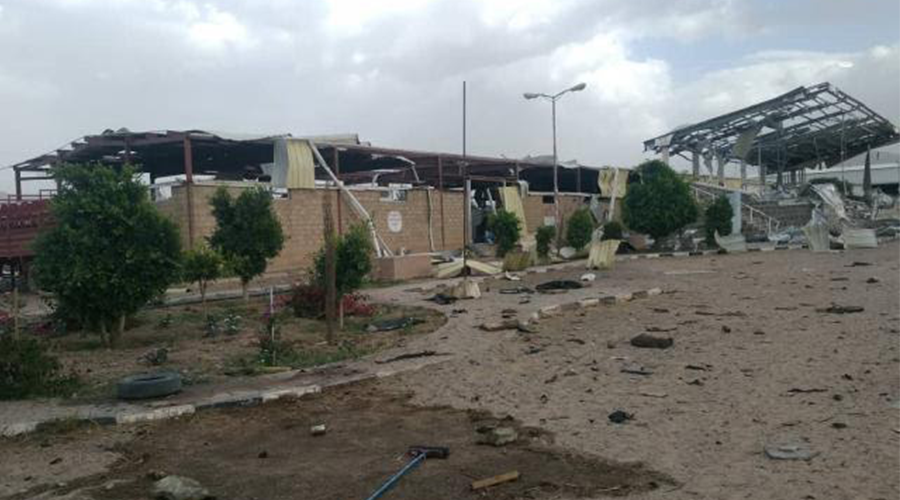 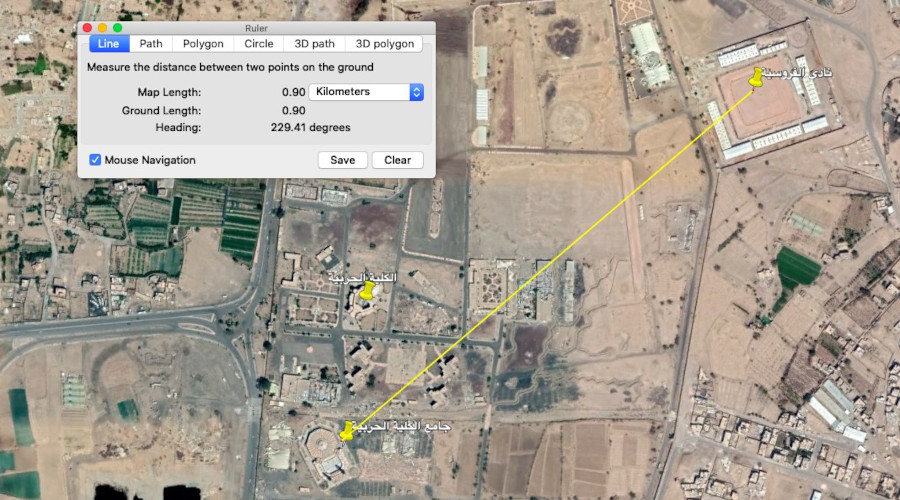 A picture from Google Earth showing the distance between the Military academy Mosque and the Equestrian Pavilion, which is 0.90 km.

Determining the weapon used in the attack 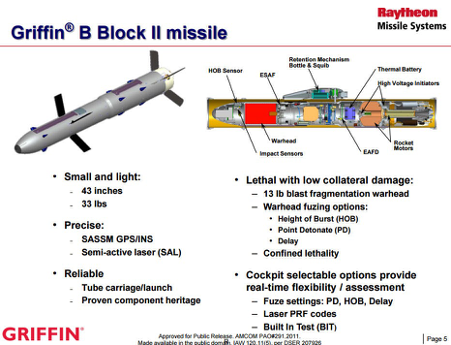 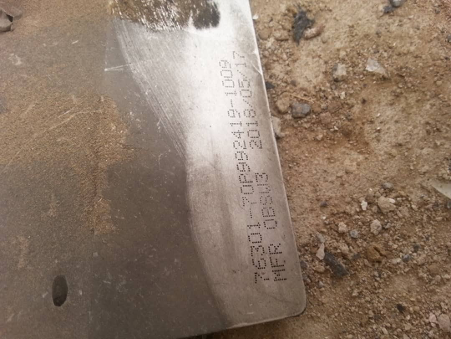 A picture, taken at the attack site, shows the first (10 76301-70P992419) and second (MFR 0B8U3/05 2018) serial number According to the book “The Iraqi War and International Law” (page 103) an American-made missile with the similar serial numbers as found on the missile in the attack site in the Pavilion was used in 2003 in an attack on a public market in the Iraqi capital, Baghdad. In both cases, the missile’s initial code of MFR indicates the munition was made at the Raytheon plan in McKinney, Texas.  Raytheon Corporation (MFR) is a prominent American arms manufacturer with a headquarter in Saudi Arabia in the capital Riyadh. 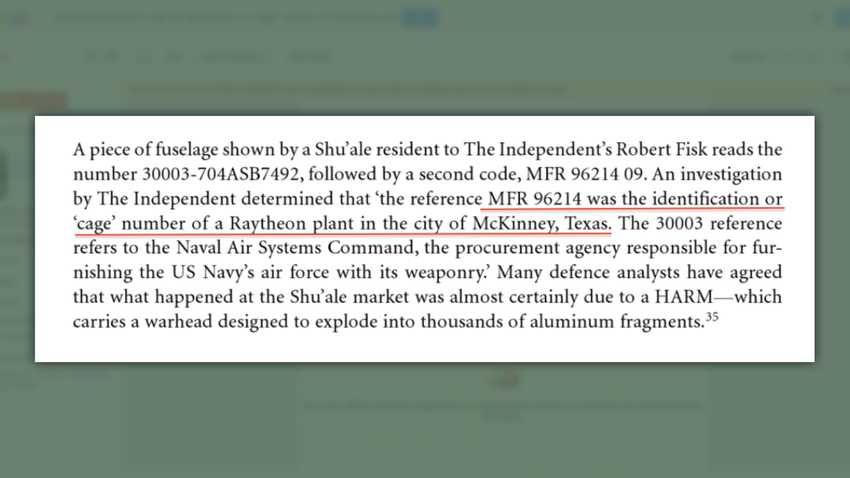 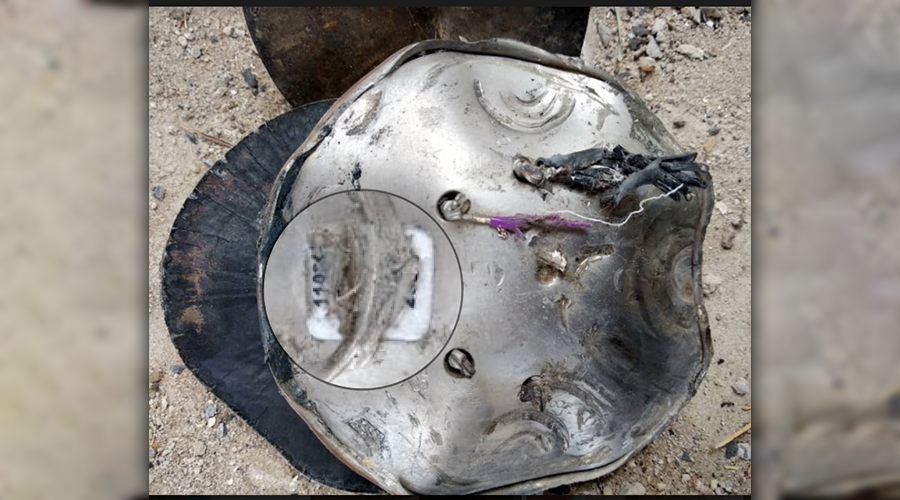 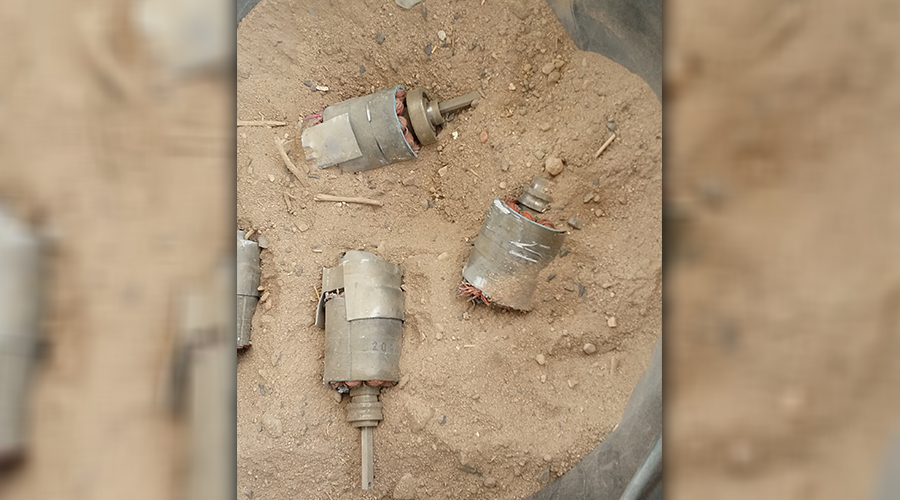 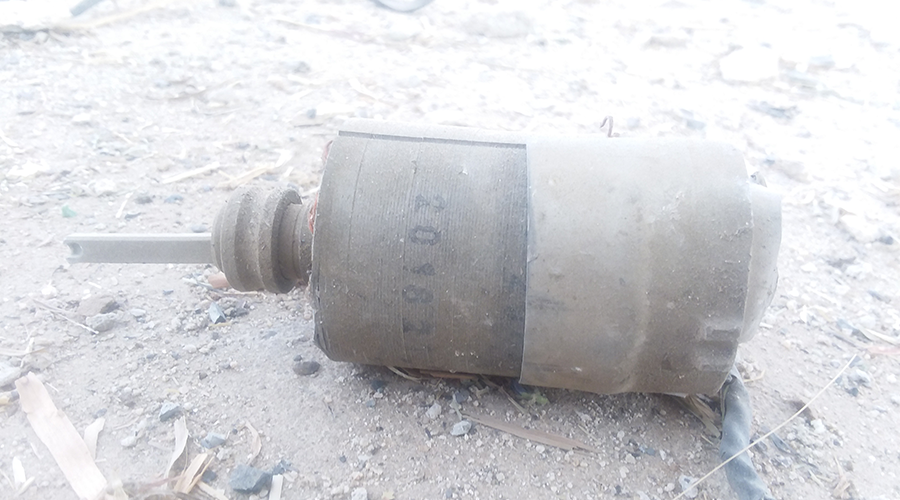 On the same day of the incident, the Saudi Press Agency (SPA) published on its website a report by the spokesperson of the Saudi-led coalition, Colonel Turki al-Maliki, describing the attack as a qualitative operation of legitimate military targets affiliated with the Houthi group Ansar Allah. This came shortly after the Houthi group launched two ballistic missiles at 23:23 local time, on Saturday, 28 March, towards Riyadh and Jizan. The interception of these rockets (resulted in their destruction) caused several shrapnels to hit some of the residential neighborhoods, according to Al-Sharq Al-Awsat newspaper. 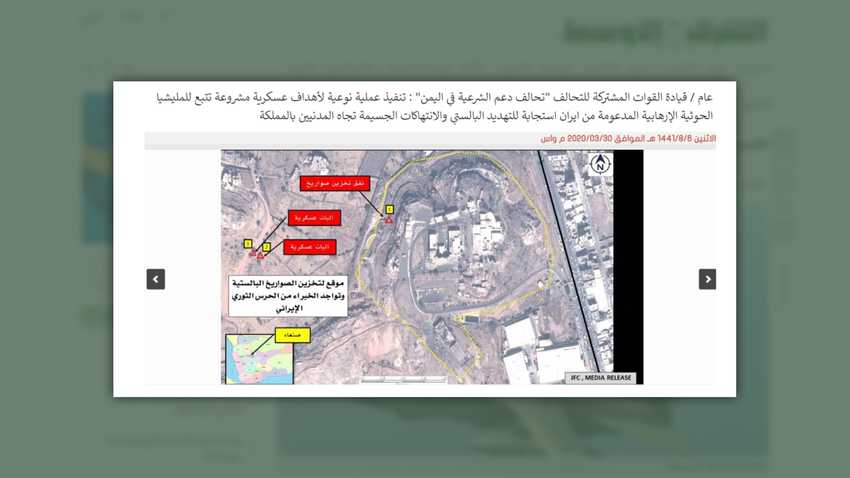 Muhammad al-Bakhiti, a member of the political bureau of the Houthi group, claimed on Al-Jazeera “the bombing of Sana’a will not pass without a painful response. Note that these escalations coincided with the fifth anniversary of the start of the military operation of the Saudi-led coalition, named “Operation Decisive Storm “.

Two days after the incident, the websites Yemeni News Portal (YNP) and Yemeni Mashhad published news mentioning accusations of an official loyal to the “Houthi group” Ansar Allah of sending coordinates to the Saudi-led coalition with the goal of bombing the Equestrian Pavilion.

This investigation was written in cooperation with freelance journalist Haitham Al-Hasbani.