Yemeni Archive collected images and videos published on social media and news networks, and analysed and verified them using open source tools. Yemeni Archive found out that Dar al Shifa Specialised Medical Center, and a civilian house behind the centre, in the Masa’bah area in the Sahar district of Saada Governorate, were targeted by the Saudi-led coalition on January 22, 2018. Saada Governorate is located in northern Yemen, about 234.3 km from the capital Sana’a, and is considered to be a stronghold of Houthi movement, one of the main parties to the conflict in Yemen.

At dawn on January 22nd, activists circulated news of shelling on a health centre and a civilian house in the Masa’bah area. The attack took place in the early morning hours, around 1:00 am, according to witnesses. The first tweets related to this attack were published at 1:45 am, then news containing mixed information began to emerge.

News indicated that the Saudi-led coalition carried out an air strike on the health center killing seven civilians, including five children and one woman, and injuring four people from one family. This information was reported in various outlets, the Yemeni News Agency (Saba) and pages of activists on social media.

On Monday, January 22, 2018, Yemeni Media Front Facebook page published news that 12 citizens, including women and children, were killed and injured in a Saudi airstrike on a house and health center in the Sahar district in Saada. Yemeni Archive, using Timestamp, verified that the news release was published at 9:45 am. 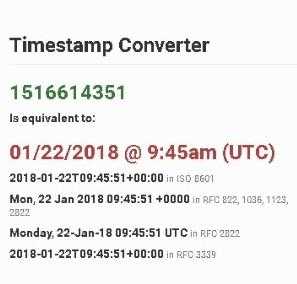 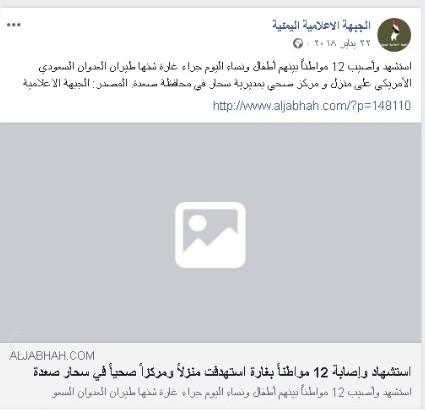 On the same day, the Yemeni News Agency (Saba) reported that the Saudi air force targeted a civilian home in the Masa’abah area, part of which operates as a health center, killing seven citizens, five of whom were children, and injuring five others.

On the same day, at 2:02 pm, Yemen Satellite Channel reporter Issa Atef published a report on his personal YouTube page about the attack on Masa’bah containing testimonies from eyewitnesses, one of whom said: “Yesterday night, Saudi planes targeted Shifa Hospital and next to it a civilian house. Five were killed and three children and a woman were injured. This is just preliminary findings and the rescue operations are still ongoing.”

Al-Masirah TV posted a report on its YouTube page the same day describing the attack. This video shows an eyewitness to the attack who stated: “Saudi planes targeted a health center and a citizen’s home.” In the same video, another man is interviewed who states: “The airplanes hit my brother’s house while they were sleeping at night using the same bomb they used in Wadi Allaf. This is a large internationally prohibited bomb. The people living here were children who fled from Baqaa. My brother’s family was all martyred, his wife and five children, and one of my brothers is now in intensive care and a second brother is now in the hospital.”

Saada governorate was subject to intensive air raids on January 22, 2018, starting with an airstrike targeting the house of a civilian in Al-Masa’beh area in Saada governorate. The news began to emerge after midnight. The first tweet was published by the Media Front on its Twitter page at 1:45 am local time in Yemen, reporting the death and injury of twelve civilians in an airstrike targeting a house and a health center.

Then September 21 website tweeted at 2:08 am mentioning that twelve civilians were killed or injured in the district of Sahar in the province of Saada. 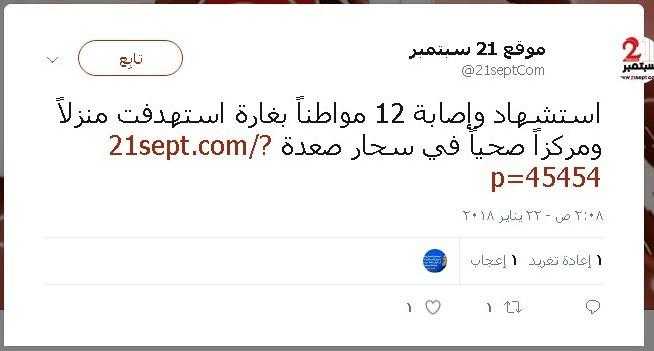 On the morning of the attack, a reporter for Al-Masirah TV prepared a report about the attack, filmed at its location and showing the destruction caused by the raid, It was posted it on his personal YouTube channel at 2:02 pm the same day.

To determine the exact targeted location, Yemeni Archive collected and verified visual content associated with the attack and identified the main objects at the location and compared it with satellite images of the Masa’abah area in the district of Sahar in Saada governorate. 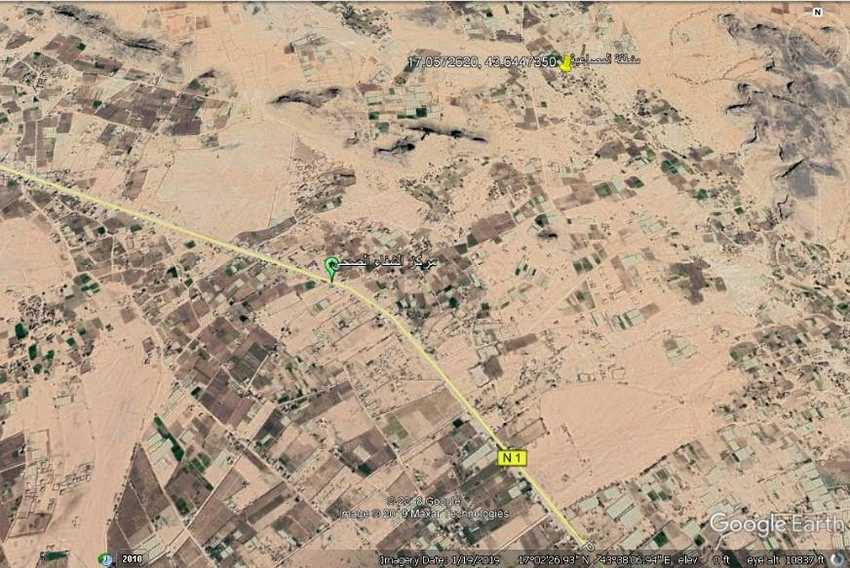 Some of the details of the targeted building and the surrounding area were seen in visual documentation of the attack uploaded by various sources. To aid this verification process, we have used coloured markers to highlight repeated features from various sources, as well as their corresponding locations from satellite imagery. 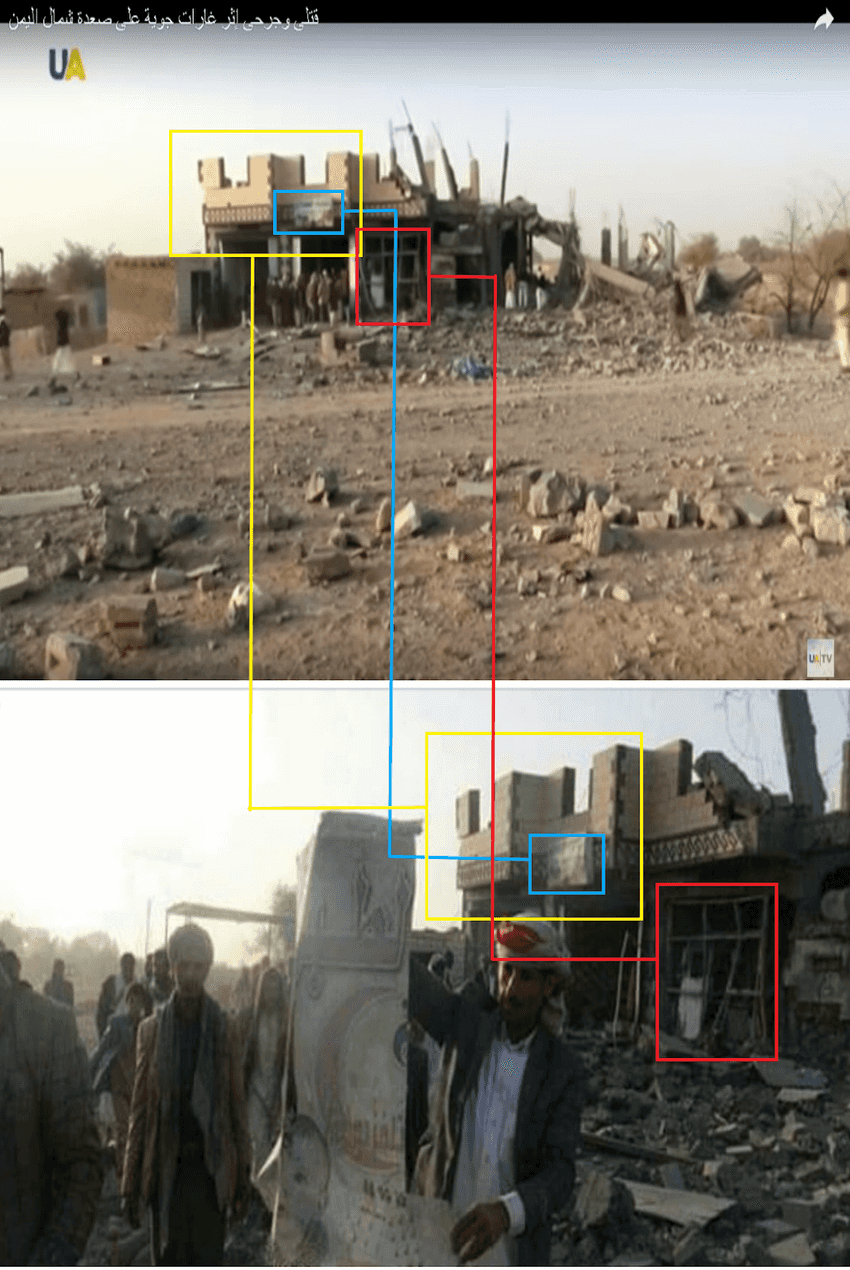 A picture of the health center (blue) and distinguished features of the shape of the building at the top (yellow) and a broken aluminium gate (red). 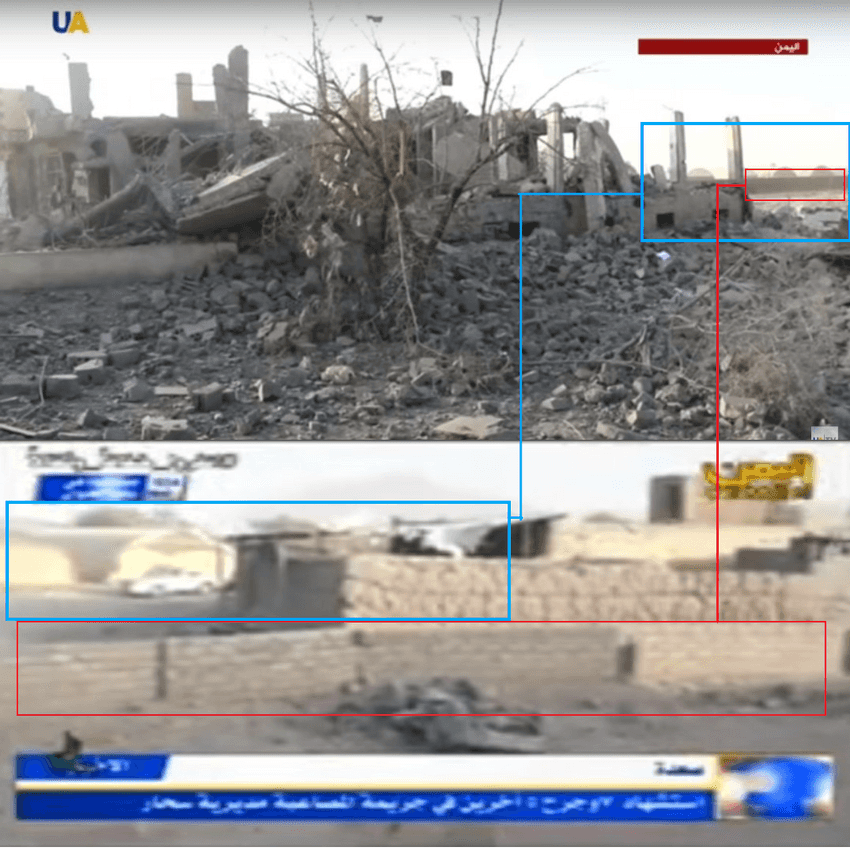 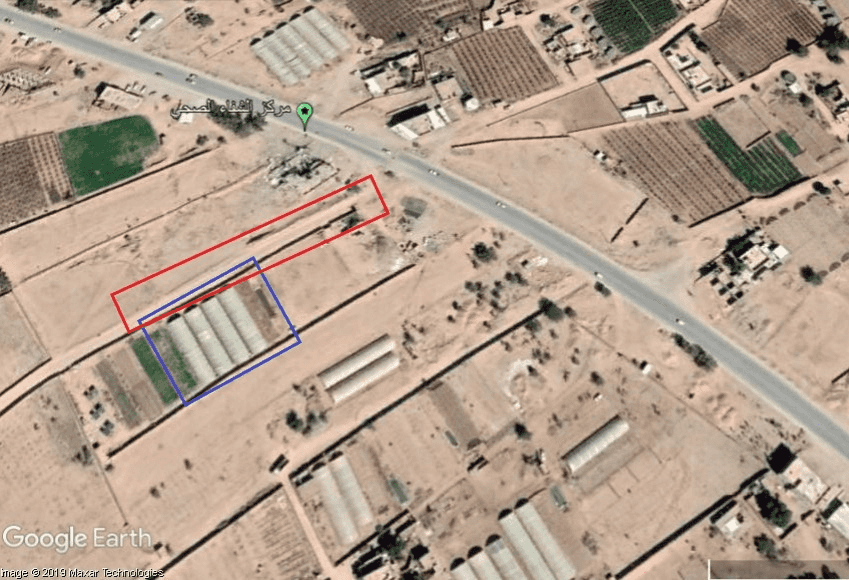 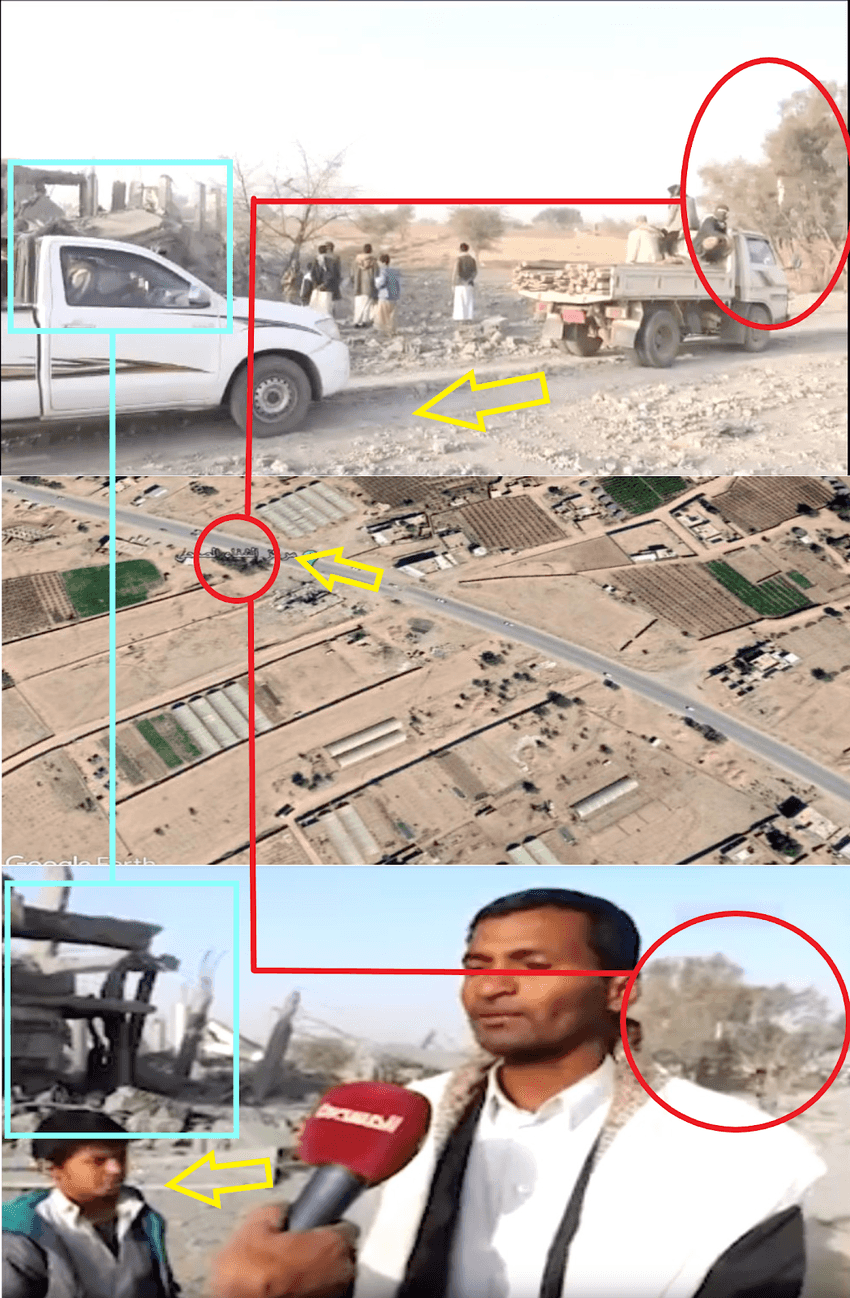 A group of trees close to the target building in front of a public street.

Impact of the attack 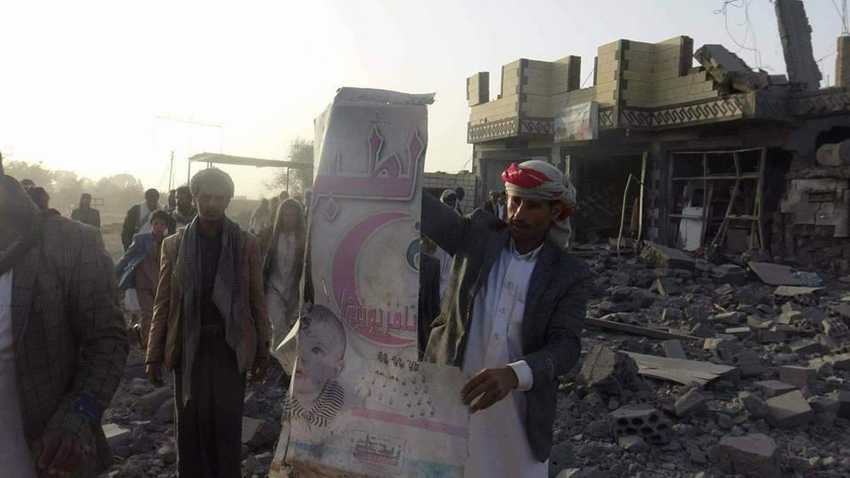 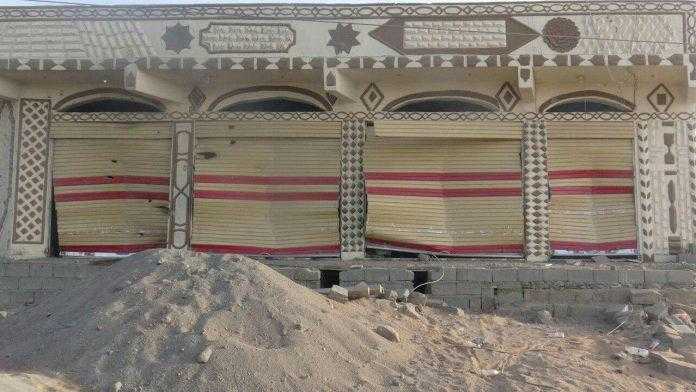 Images of the aftermath of the devastation caused by the attack. Photo from Hajjah News Facebook page. 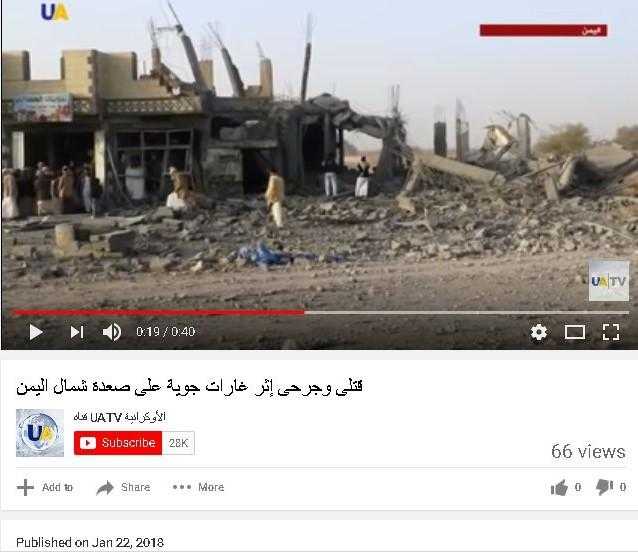 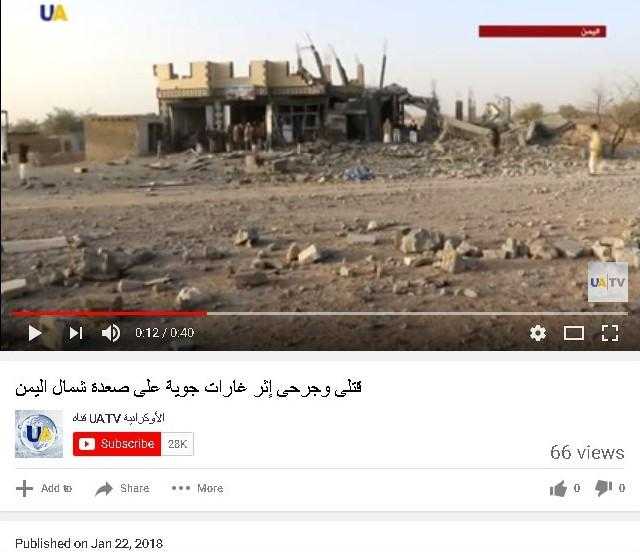 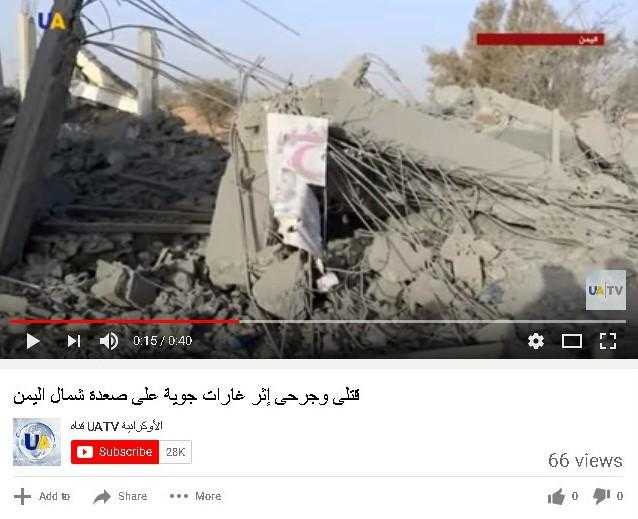 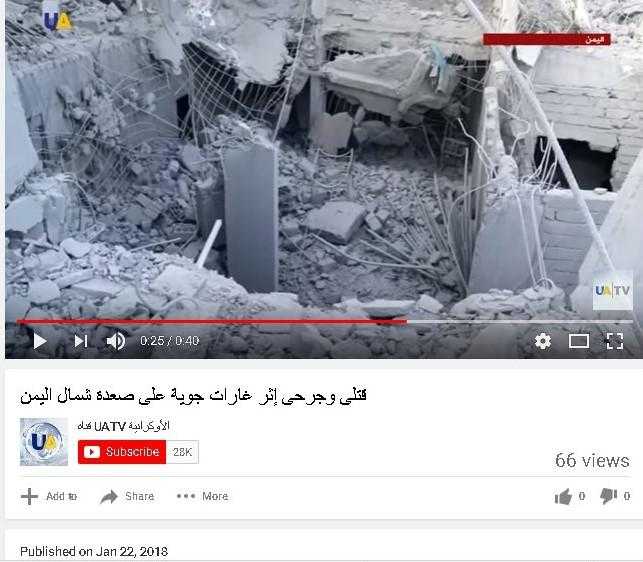 Photos from a Ukrainian TV report on the attack uploaded to YouTube, showing the destruction caused by aerial bombardment. 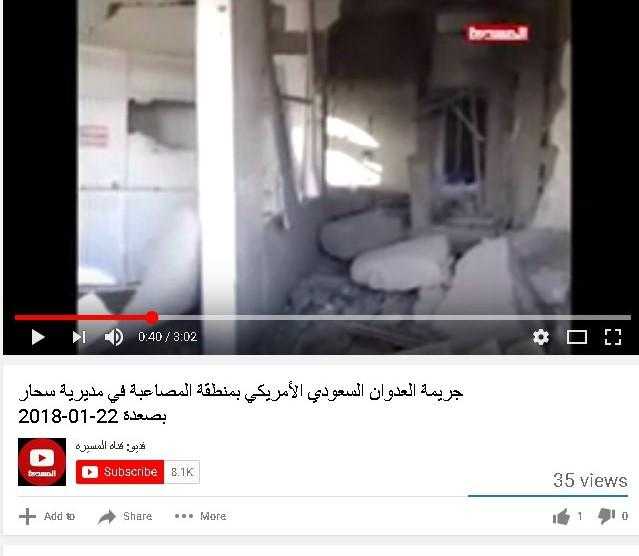 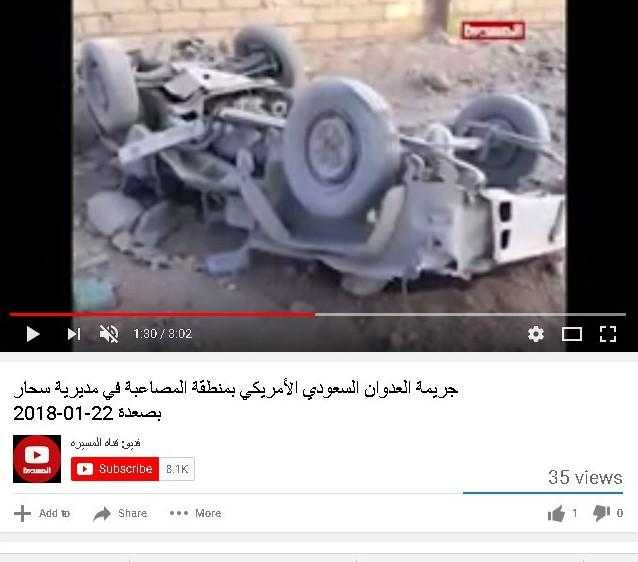 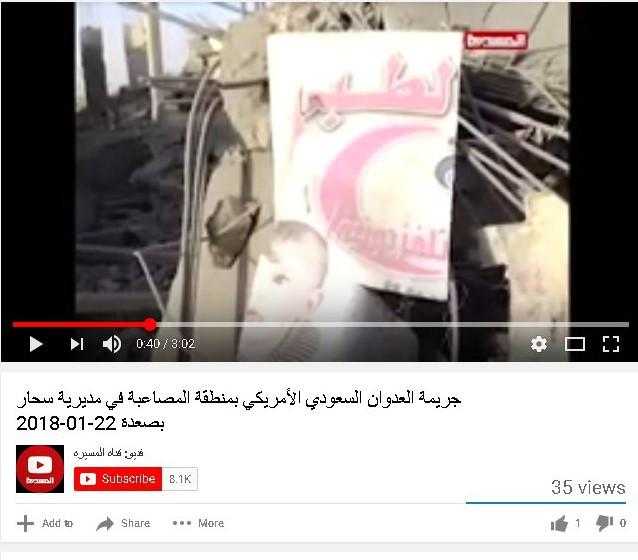 Photos from the Al-Masirah TV report prepared after the attack on the health center.

To add another layer of verification to clarify the destruction at the health center, Yemeni Archive searched for historic satellite imagery on Google Earth for pictures of the targeted area before and after the attack. The following two images illustrate the impact of the destruction. The first photo was taken in 2017, before the attack, and the second in 2019, after the attack. 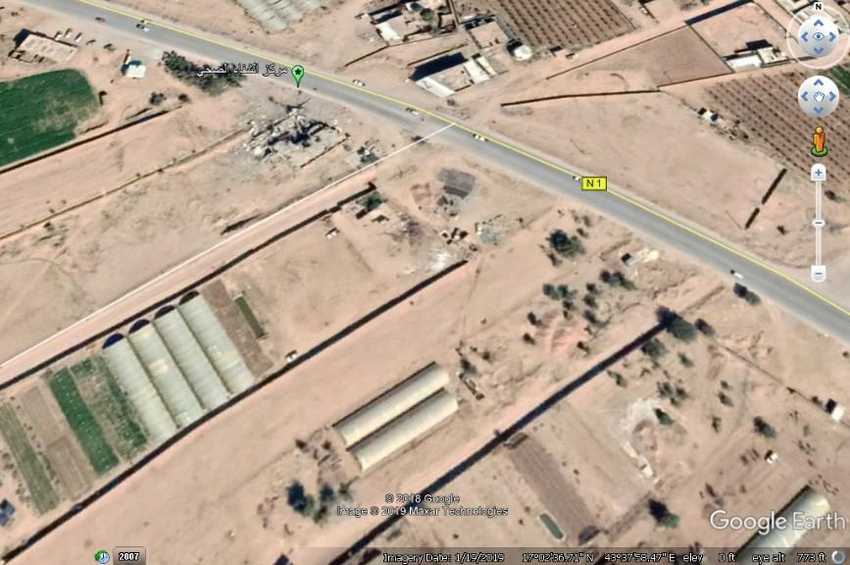 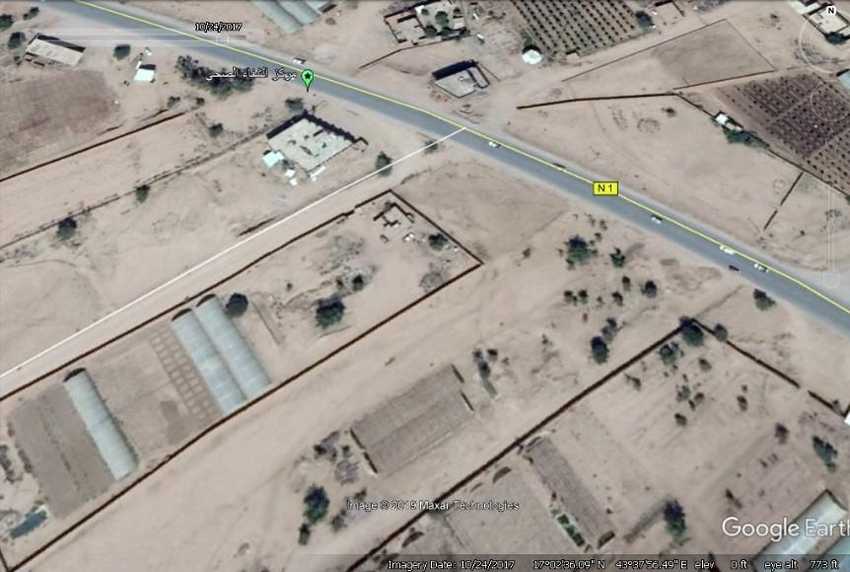 At 9:15 am, ”Al-Mayadeen” TV website reported that seven civilians, including five children and a woman, were killed in Sanaa.

A relative of the family whose home was behind the health center said in Al-Masirah TV report: “My brother’s family was all martyred, his wife and five children, and one of my brothers is now in intensive care and a second is also in the hospital.”