An investigation reveals that a journalist and nine others were killed in alleged Saudi led coalition airstrikes with 16 others injured in the 17 September 2015 attack in Al Geraf district of Sana'a.

After midnight on 17 September 2015, violent explosions rocked Al Geraf Al Sharqi neighbourhood in the Yemeni capital, Sana’a. Social media and news websites circulated news of targeting residential houses and casualties. Media outlets loyal to the Saudi-led Arab Coalition claimed that the raids targeted secret sites and depots of weapons and ammunition for Ansar Allah movement “Houthis”. Reports said that citizens were killed and wounded, including a journalist for Almasirah TV, while he was documenting the destruction of one of the houses that had been bombed, when the strikes hit the site again. The journalist was accompanied by civilians and paramedics who gathered around the house to rescue the wounded, according to Almasirah TV. In its investigation methodology, the Yemeni Archive relied on: collecting available information about the incident, verifying the allegations by the two sides of the conflict, analysing the visual evidence in the videos and photos, and determining the geographical location and comparing its features with satellite images.

Al Geraf Al Sharqi neighbourhood is located in Shu’aub District, north of Sana’a Governorate. It is separated from the Al Geraf Al Gharbi neighbourhood by the road leading to Sana’a International Airport, around 7 km away. The populated neighbourhood is a stronghold of the Houthis, and the headquarters of the group’s political office.

The neighbourhood has the central prison and the Military College from the eastern side, which have been subjected to repeated airstrikes, since the start of the military operations of the Arab coalition in Yemen at the end of March 2015. The strikes resulted in massive destruction to the Military College buildings, as satellite images show.

A satellite image of Al Geraf Al Sharqi neighbourhood from Google Maps, shows the targeted location and the Military College

The first report about the incident was in a Facebook post by Mjly Alhzar, at 01:16. Yemeni Archive reached the time of the post by analysing its time stamp using Timestamp Convert. While Russia Today TV tweeted that the airstrikes targeted the house of a military leader of Ansar Allah movement, “Houthis”, in the Al Geraf area.”

A screenshot of Russia Today tweet about the attack

Hours after the attack, news emerged that journalist Bilal Sharaf ElDin had been killed in Al Geraf Al Sharqi neighbourhood, after he was hit by a second airstrike, while documenting the effects of the destruction in one of the houses that were bombed in the first airstrike. Almotamar Net website published a video on YouTube, filmed at night, showing people trying to clear the rubble of houses to exhume the bodies of the victims. The wife of one of the victims said, at 10:30 in the video: “We were sitting, when we heard the sound of bombing at 1 o’clock. My husband said he will go to check and rescue those in the house that was bombed. When he got out, the plane came back and hit again, and he died as a result. Allah is sufficient for me, and he is the best disposer of affairs”. By analysing the timestamp of Mjly Alhzar’s Facebook post, and the testimony of the wife of one of the victims killed in the attack, the targeting time can be determined between 01:00 -01:20. Until the evening of the attack day, TV channels, news sites and social media circulated videos and photos of the sites of the airstrikes. The published visual content varied between day and night.

The Yemeni Archive collected, analysed and matched visual evidence, and verified the authenticity of the visual content related to the incident, which was published by Almasirah TV (by Almotamar Net), Yemen Today TV, Sana’a Rouhi Facebook page, Nagwa Daifallah Facebook post, and Yamanyoon news site. Visual analysis reveals that two different sites were attacked that day. This will be illustrated in the following comparisons: The first site appeared in a video shot at night, and published by Almotamar Net on YouTube, and a TV report published by Yemen Today TV, which was filmed during the day after the houses collapsed. Yemeni Archive identified the identical landmark in the two videos: a white cylinder object hanging from the rubble of a house. 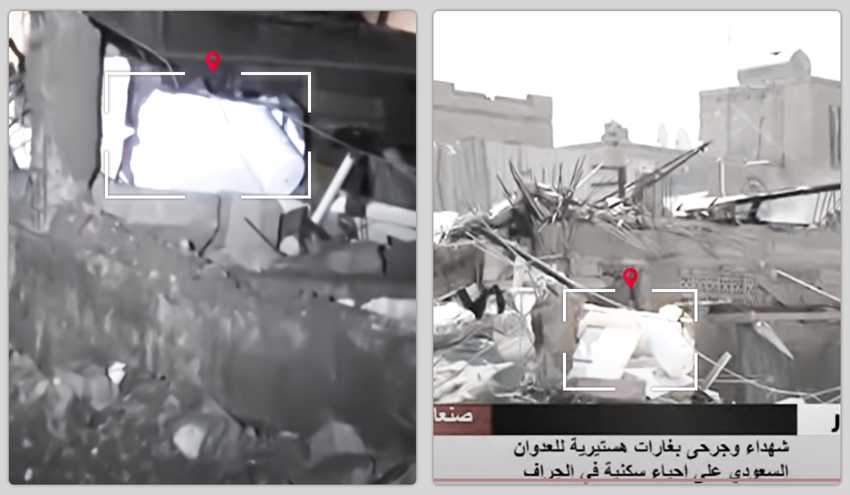 Night photos published by Nagwa Daifallah at the second location showed a yellow house with decoration on the outer wall, with a damaged and burning vehicle nearby. The two features match the visual evidence in a video posted by the Sanaa Rouhi Facebook page that morning. Yemeni Archive created a panoramic image compiled from the video to show the place more broadly. 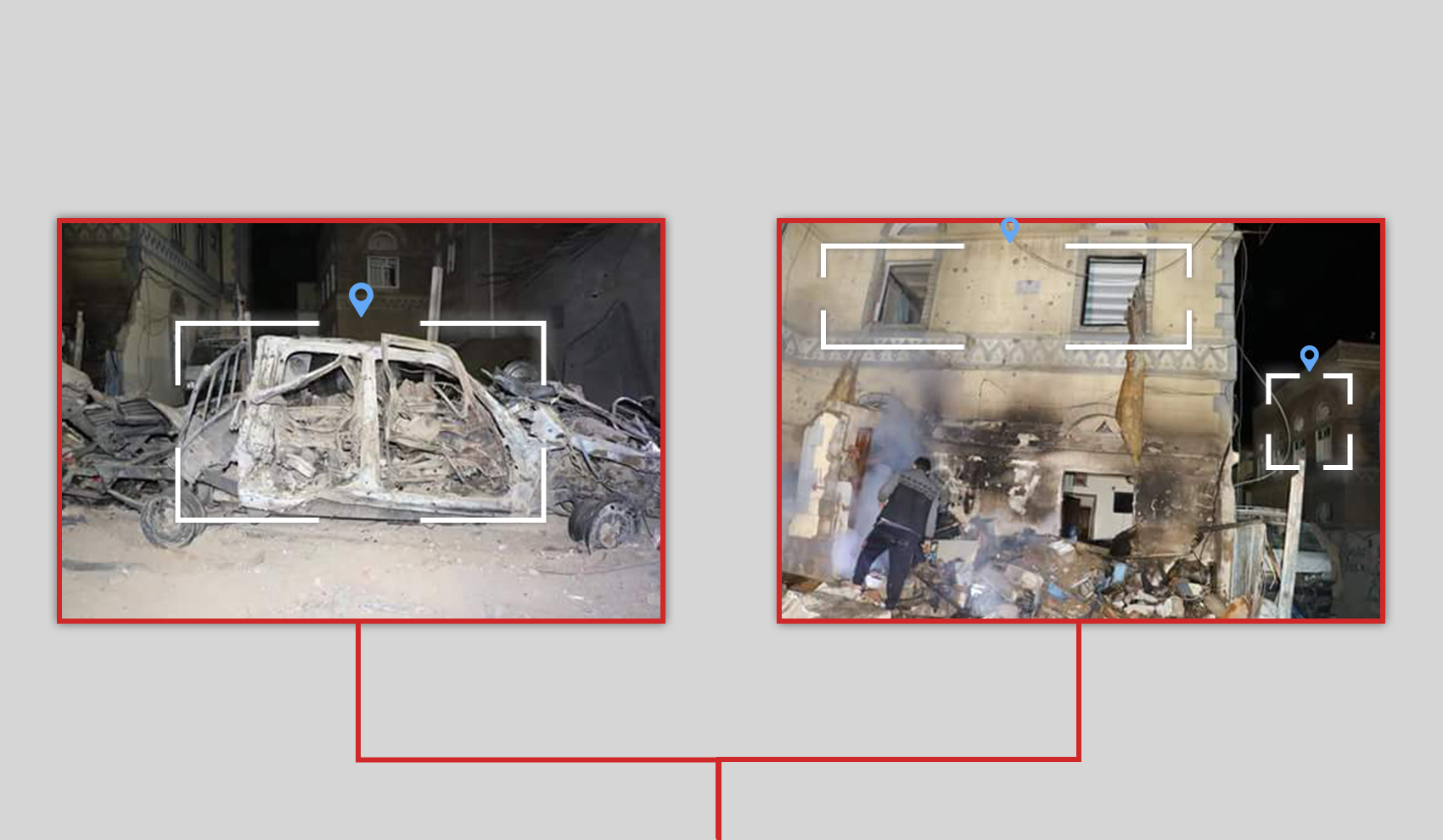 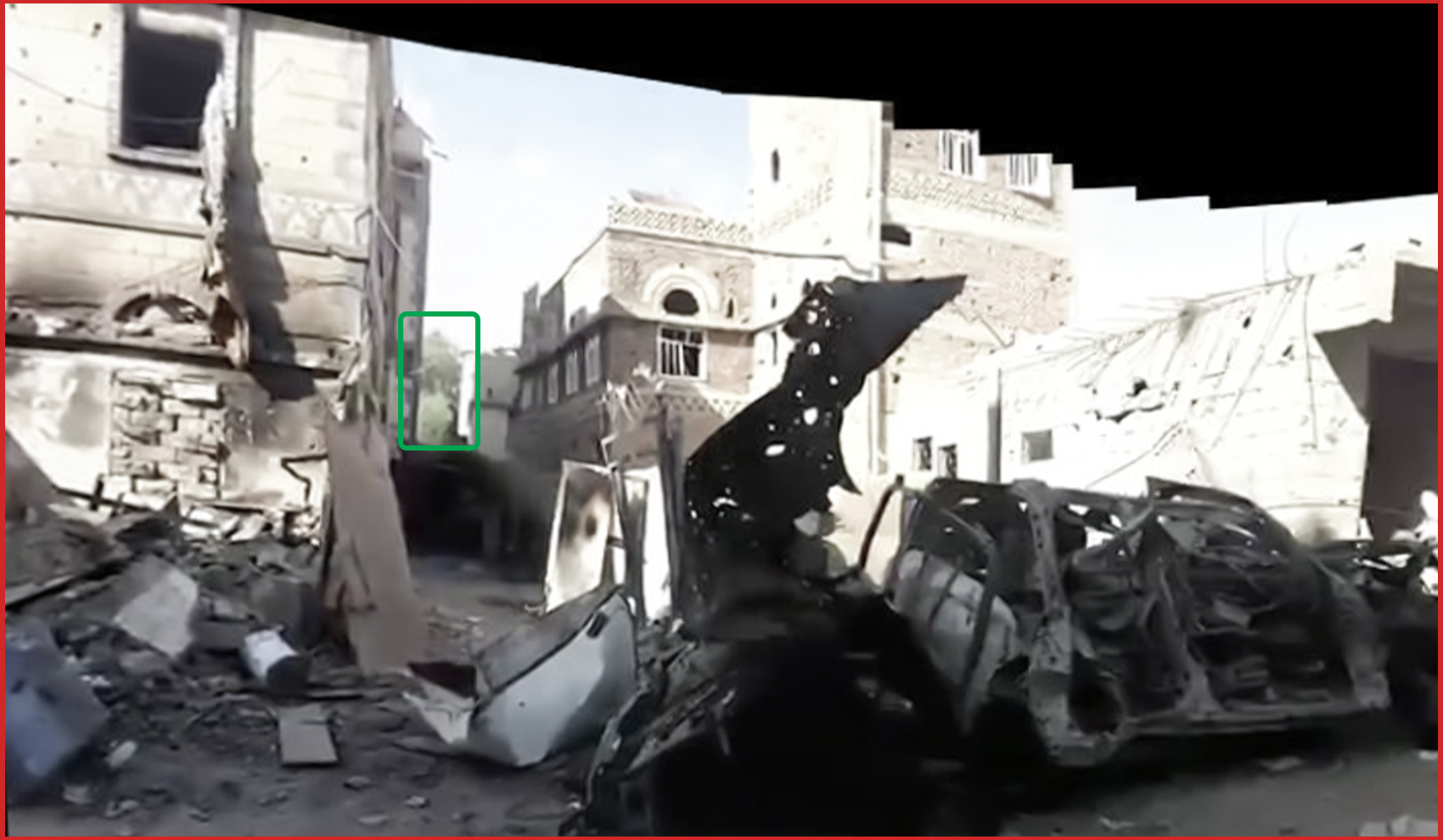 Above: photos posted by Nagwa Daifallah on Facebook. Below: a panoramic image compiled from the video of the Sanaa Rouhi Facebook page.

The details of the house in the previous photos correspond to a video published by Alsomoud YouTube channel, and shows another house on the opposite side, and victims, including a woman being pulled out of it. 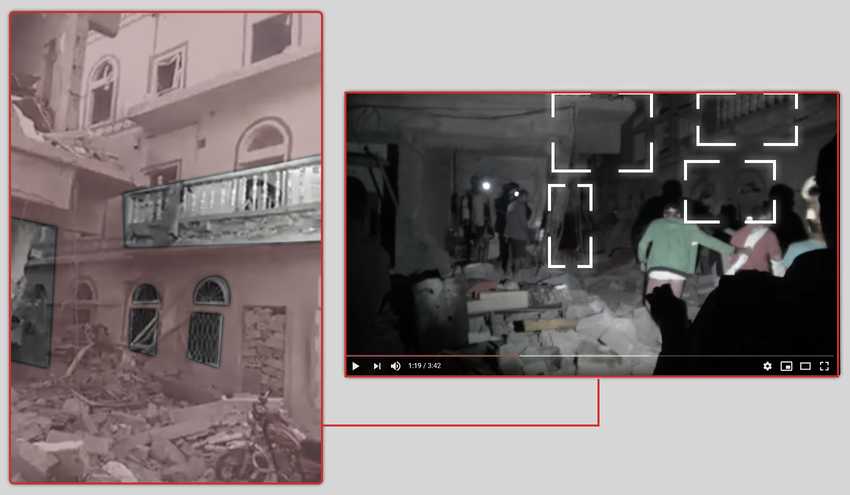 To identify the two attacked sites in the previous comparisons, the Yemeni Archive analysed and verified landmarks surrounding them, and compared them with satellite images to determine the geolocation of both sites. Two videos published by Yaman Today and Almasirah TVs, from two different angles and times show a match in a wall of the gate of one of the houses. 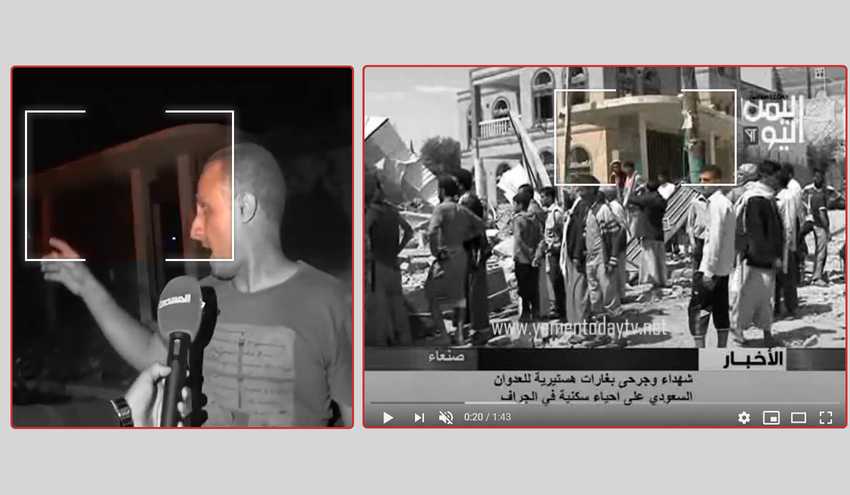 The visual evidence in Yemen Today’s video corresponds to photos of the first attack site published by Yamanyoun. As seen from this angle, the photographer stands towards the rubble and behind him appears the aforementioned gate. 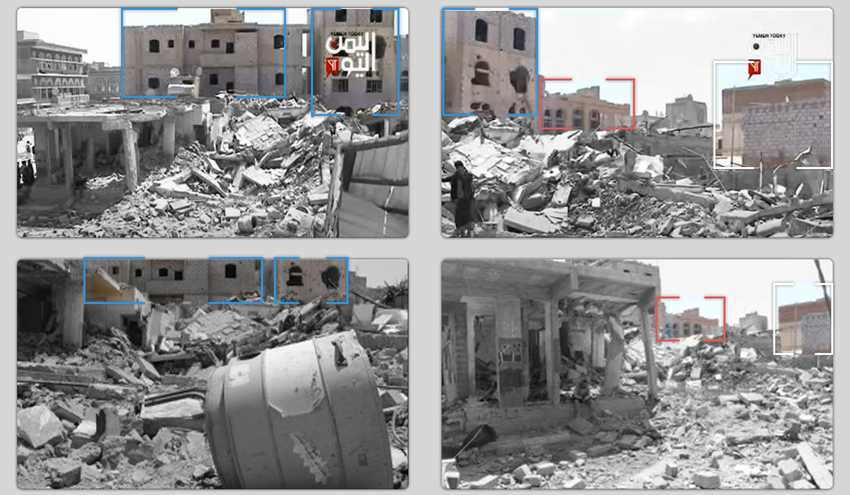 The photo of the tree along the road separating the damaged houses on the southern side of the first site, which was published by Yamanyoun website, adds more accuracy in determining the attack site. 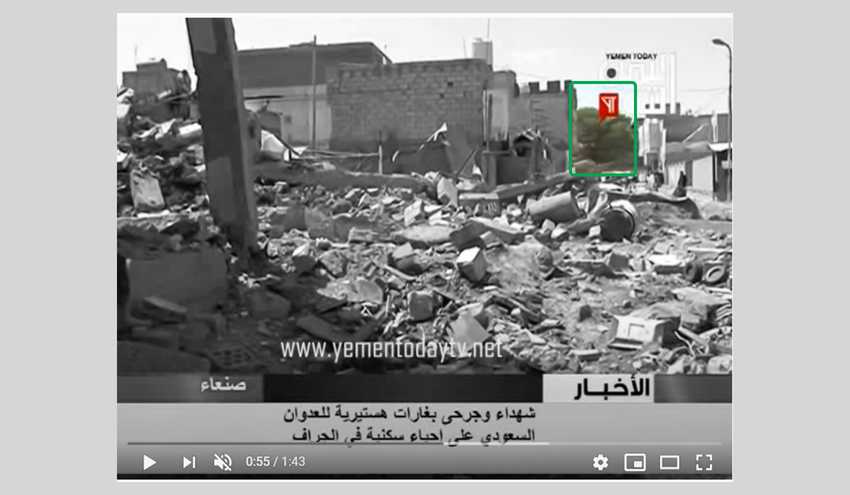 Matching the landmarks identified by Yemeni Archive with the satellite images, makes it possible to determine the first site that was targeted, and confirms its location at coordinates: 15.399088, 44.215157 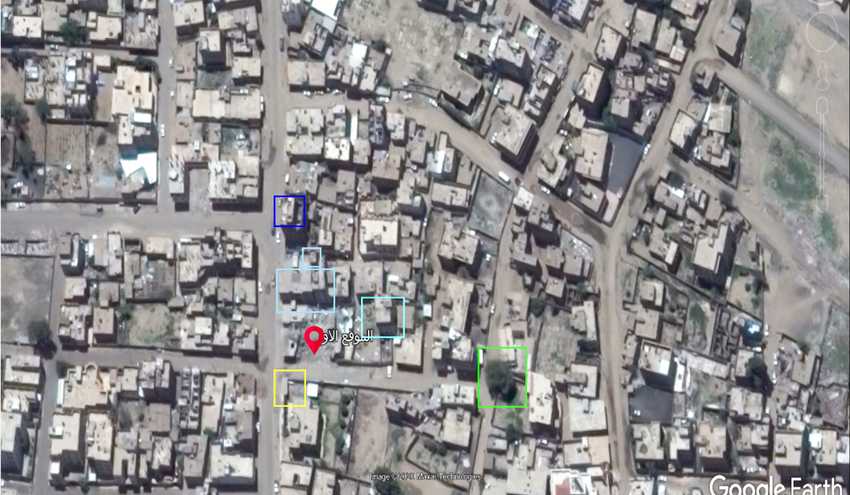 A satellite image of the first attack site

A 52-second video posted by Sanaa Rouhi Facebook page showing some visual evidence that we were able to identify with difficulty because the neighbourhood had many buildings, shows the location of the second attack, and the details of the match with satellite images at coordinates: 15.397557, 44.216656 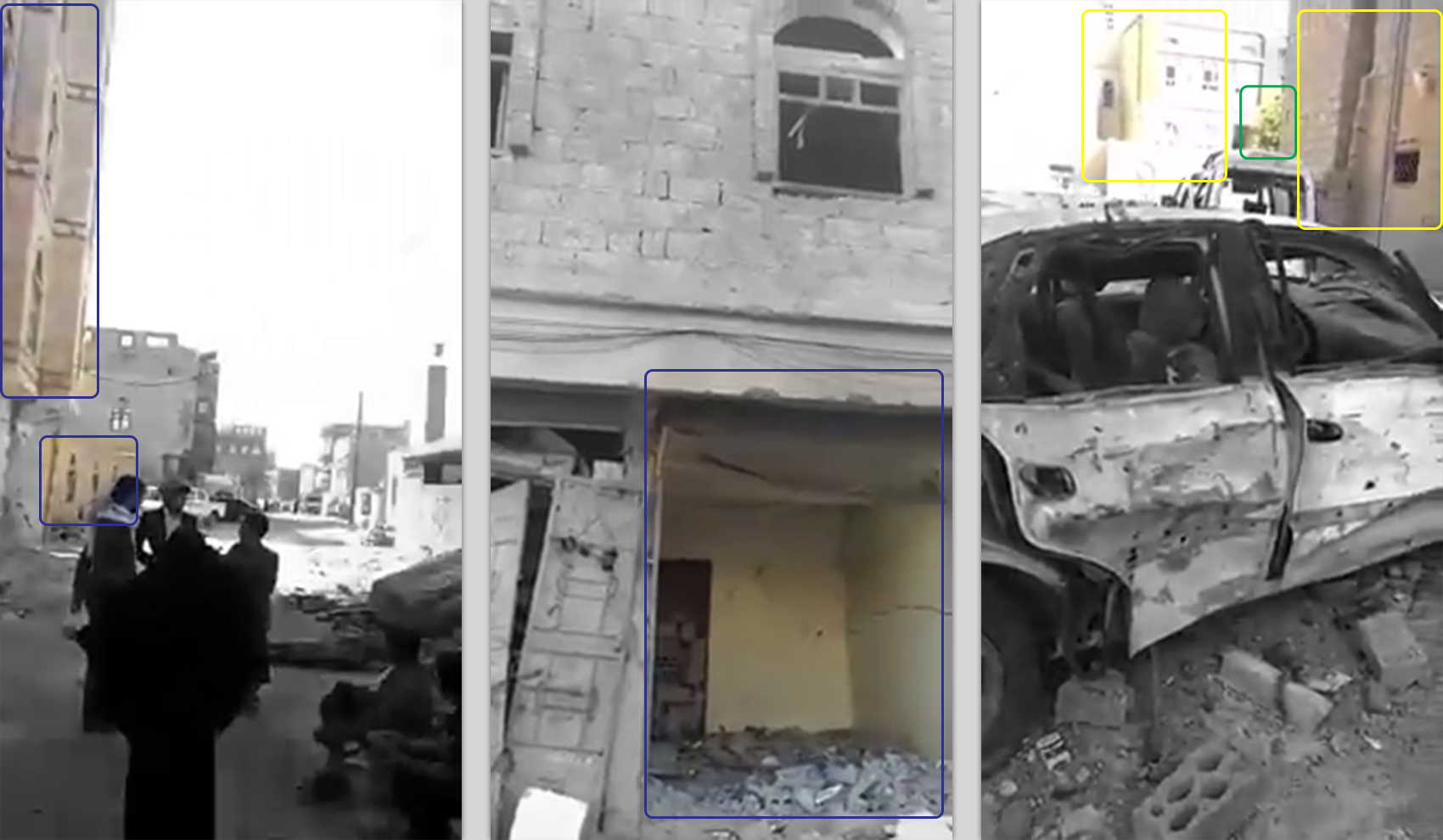 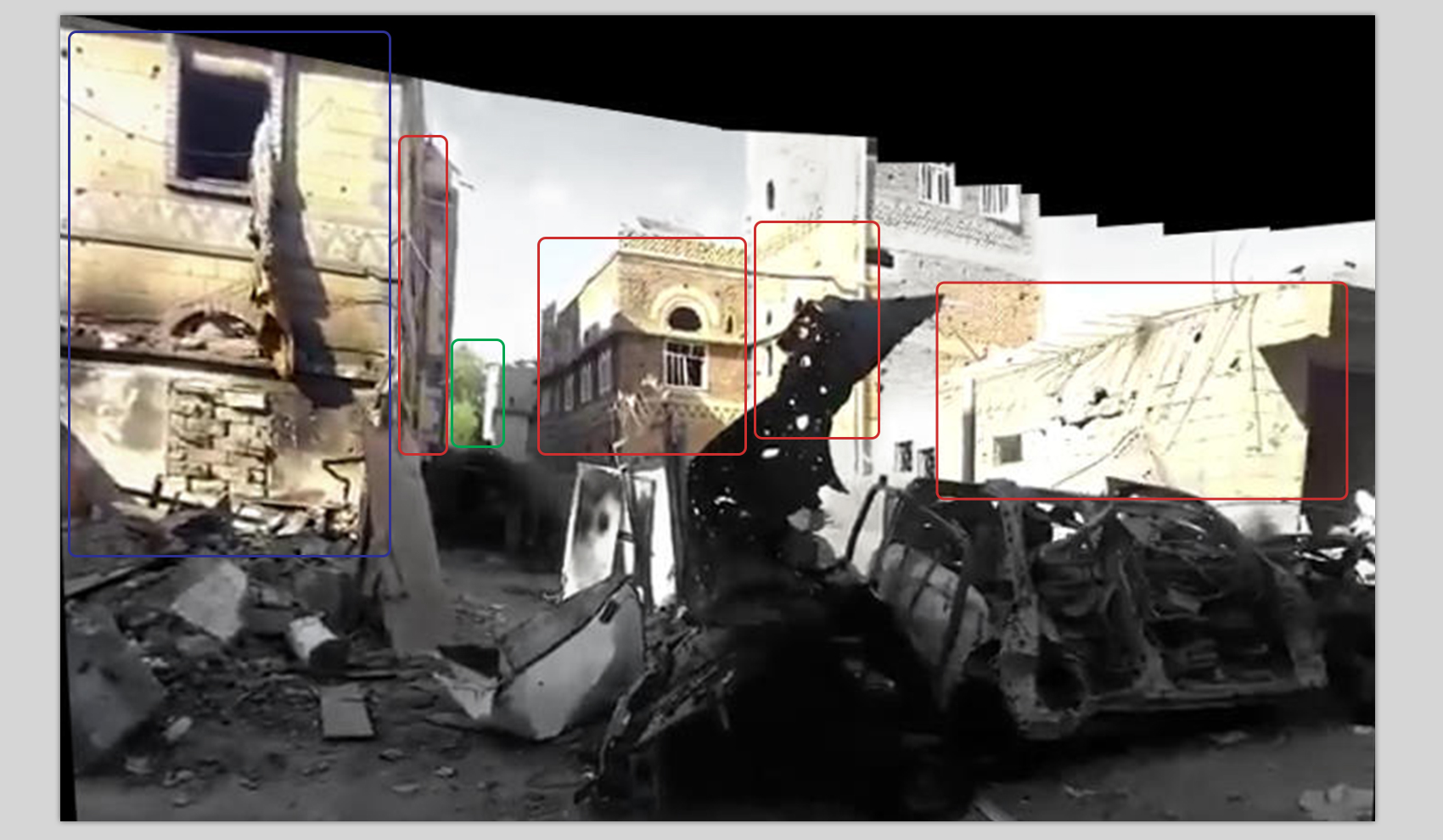 Screenshots from the video published by Sanaa Rouhi Facebook page

A satellite image of the second attack site

Google Earth calculation tool indicates that the distance between the two targeted sites on the same day is about 230 meters, which emphasises a testimony by a citizen in a report by Almasirah channel, published by Almontada Net website, on the eve of the attack at 00:00:20. 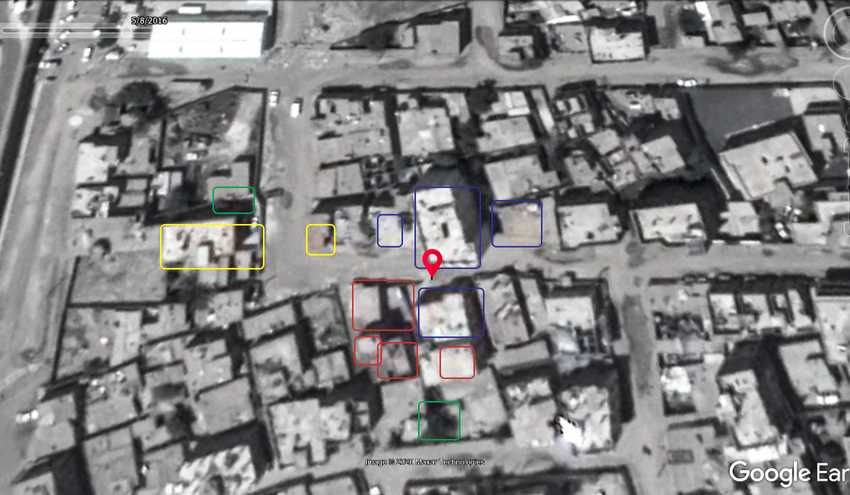 A satellite image from Google Earth

Several houses were damaged by the airstrikes, in addition to citizens’ vehicles. The destruction can be analysed by measuring the impact area of the attack and comparing archival images from Google Earth, before and after the attack.

The following comparison of the photos of the first site, before and after the attack, shows the area of ​​destruction caused by the strikes, which is estimated at 800 square meters, according to Google Earth scale. This makes it more likely that the site has been subjected to more than one airstrike.

The area of ​​destruction in the second site is estimated at 160 square meters, as the archival image from Google Earth shows, before and after the attack.

It is also possible to decide that the destroyed vehicles that appeared in the previous videos in the two sites are 6. 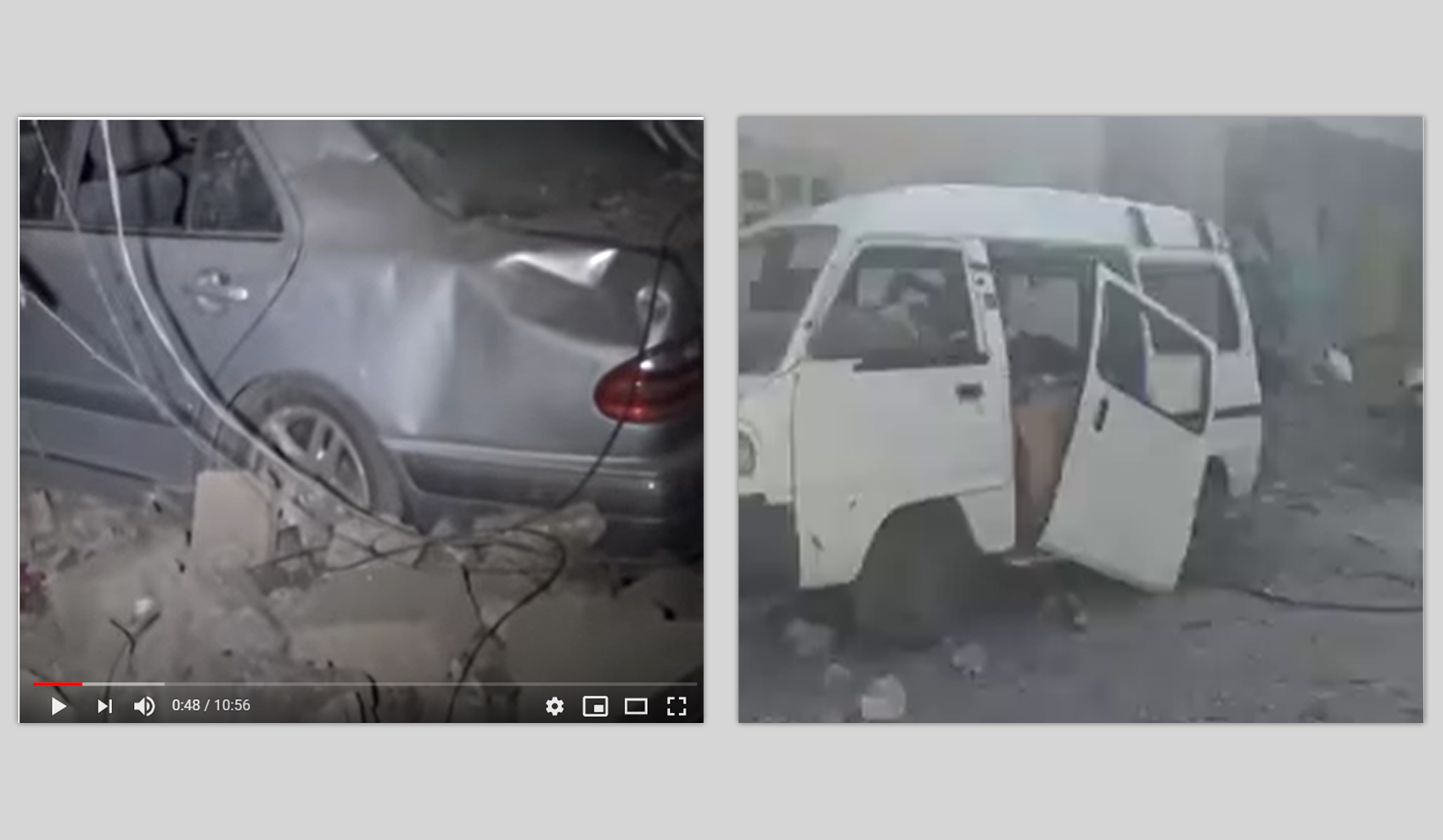 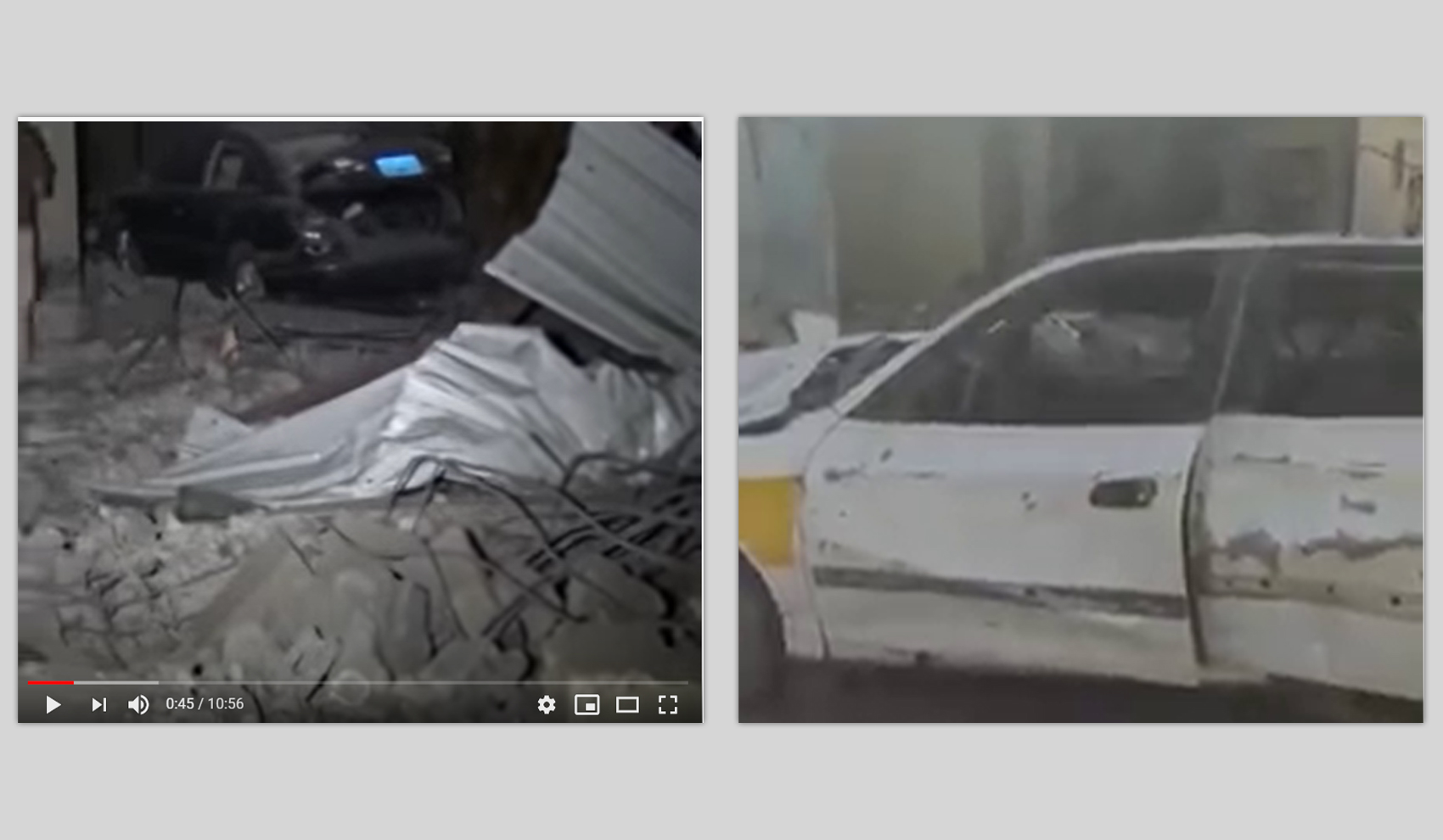 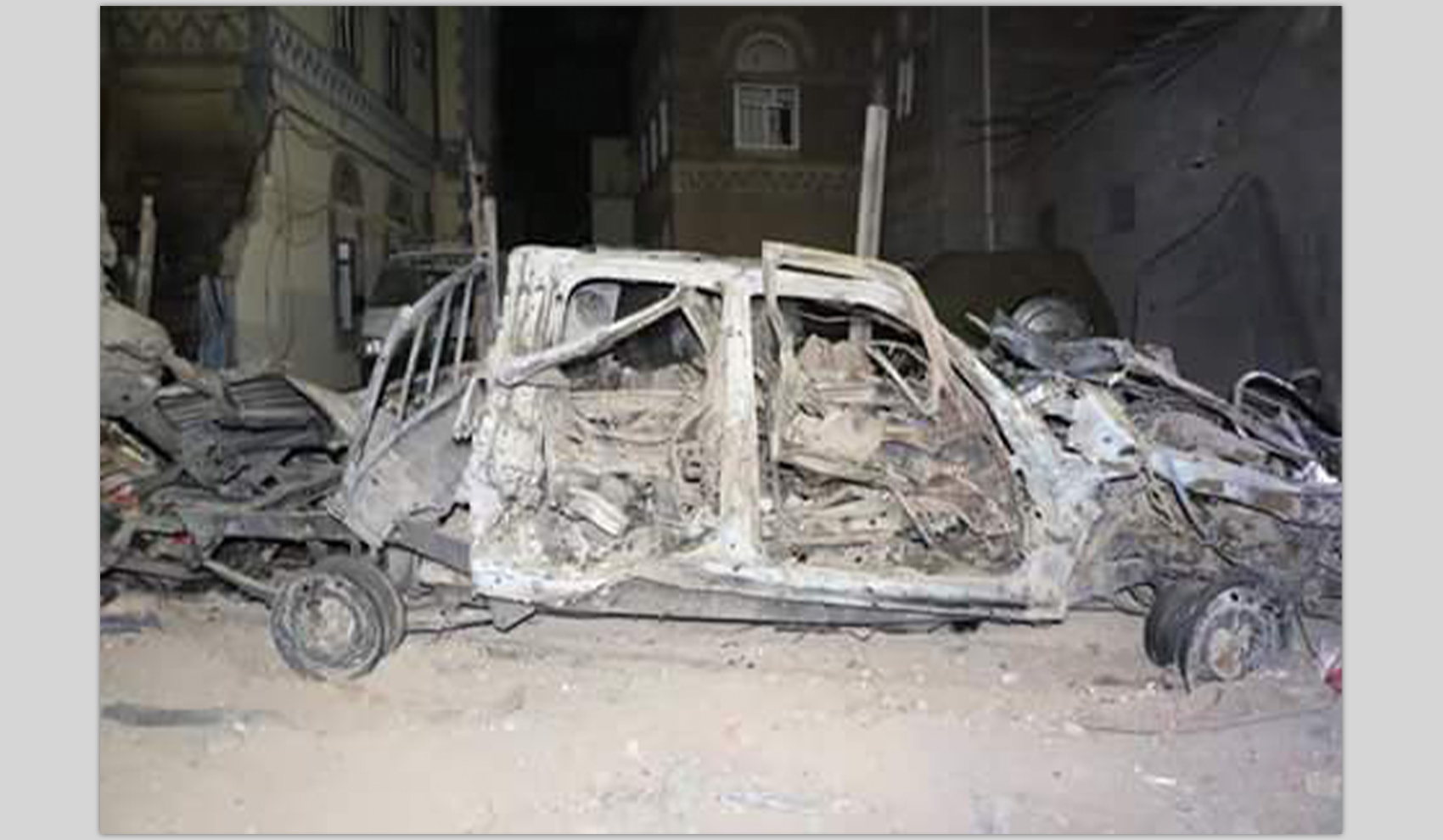 Is the site military?

According to available information, published by news websites and social media, the attack targeted the houses of military leaders in Al Geraf Al Sharqi neighbourhood. It targeted specifically the house of brigadier general Ibrahim Al-Shami, the commander of the Air Force appointed by Ansar Allah group “Houthis”, near the political office of the group, according to Abdullah Yahya Al Olofi. Al Olofi identifies himself as a researcher, and human rights activist, who lives next to the brigadier general’s house. In response to a question on his tweet about 45 minutes after the attack, and a news article published on 24 website, the house of brigadier general Ibrahim was targeted by two airstrikes.

The description in Abdullah Yahya Al Olofi’s response to his tweet, in which he mentioned that the house is located in Bir Zayt neighbourhood, matches Google Maps data, as shown in the following screenshot, close to the first targeted location.

previous circulated news and testimonies, visual analysis and available videos, the bodies of the victims that were recovered from the rubble, and that it was not possible to find evidence proving the presence of weapons depots or places used for military purposes in the two targeted locations, it can be asserted that the bombing deliberately targeted the houses of military leaders in a populated area.

A video by Al Masirah TV published by Almotamar Net website, and another video posted by Alsomoud YouTube channel show the bodies of the killed being recovered at the two attack sites, according to an analysis of visual evidence. The Yemeni Archive was not able to obtain and verify a list of the names of those killed and wounded, but official numbers indicate that 10 people were killed and 16 others were wounded, including Al Masirah TV journalist Bilal Sharaf El-Din, who was killed while filming a Coalition airstrike targeting a house in Al Jarf neighbourhood. The wide area of ​​destruction in the first site, as a result of repeated raids, in addition to the citizens’ testimonies in a video of AlMasirah channel published by Almotamar Net, suggest that the largest number, including journalist Bilal Sharaf AlDin, were killed in the second attack on the site.

Based on the information detailed above, the Yemeni Archive was able to confirm that the Saudi-led Coalition air force targeted with successive air raids the houses of military leaders in Ansar Allah group “Houthis”, and residential houses of civilians in the populated Al Jarf Al Sharqi neighbourhood. The attack occurred between 01:00 and 01:20 am on 17 September 2015, and resulted in killings and injuries, including Al Masirah TV cameraman Bilal Sharaf ElDin. The Air raids hit the first site again while citizens were gathered, and the journalist was documenting the aftermath of the destruction by the first strike.