Attacks on Bab Makhaleh Bridge in the Al Mahwit governorate

Attacks on Bab Makhaleh Bridge in the Al Mahwit governorate

On August 12, 2016, several news sites and social media platforms circulated news, photos, and videos that Saudi-led coalition forces targeted a bridge located in the Bab Makhaleh area in Khamis Bani Saad district of the Al Mahwit governorate. The bridge was hit by two air strikes at 01:00:40 am local time in Yemen destroyed the bridge and permanently cut off traffic in the area.

The Makhaleh area is one of the villages in the Bani Ali region in the Bani Saad district of the Al Mahwit Governorate, which is about (111km) northwest of the capital Sana’a. The Makhaleh Bridge is located on the N3 main road, which connects the Al Mahwit governorate with the Sana’a and Al Hudaydah governorates as well as passes through the Bajil, Bani Saad, Al Haima, and Bani Matar districts. The Makhalehl Bridge is a vital bridge through which food, oil, and large trucks pass from the port of Al Hudaydah and to the northern regions. The bridge was constructed in an area that sees especially in the summer, continuous rainfall, especially in the summer, in all its directorates. When raining, the flow of water from the mountains makes transportation to other areas difficult. The Al Mahwit Governorate was under Houthi forces control since the beginning of the war in Yemen in 2014, and the bridge is considered one of the most important roads used by the Houthis forces to transport supplies.

On Friday, August 12, 2016, at 01:00:40 am Yemen local time the Saudi-led coalition forces targeted the Bab Makhaleh Bridge in the Al Mahwit governorate with two airstrikes. The airstrikes led to the destruction of the bridge and permanently cut off traffic in the area.

Social media posts, news websites, and TV reports stated that the Bab Makhaleh bridge was attacked by airstrikes from Saudi-led coalition forces on August 12, 2016. The attack reportedly resulted in parts of the bridge collapsing, cutting off the road for vehicles. These reports alleged that the attack took place in the early hours of the morning. To determine the time of the attack, Yemeni Archive’s investigations team utilized published reports detailing the incident with the timestamp from the first post alerting of the attack. The first post online alerting of the airstrikes on the bridge was a post by a local source (Muhammad Nayef Makram) on his personal page on Facebook. After analyzing the timestamp of the post using the TimestampConvert tool, Yemeni Archive was able to indicate that the incident likely occurred in the early morning at around 01:40 am local time.

On the same day, the Yemeni News Agency “Saba” published a news report, mentioning that the bridge had been targeted by two airstrikes. The news agency additionally reported that the airstrikes destroyed the bridge cutting off the road for vehicles. 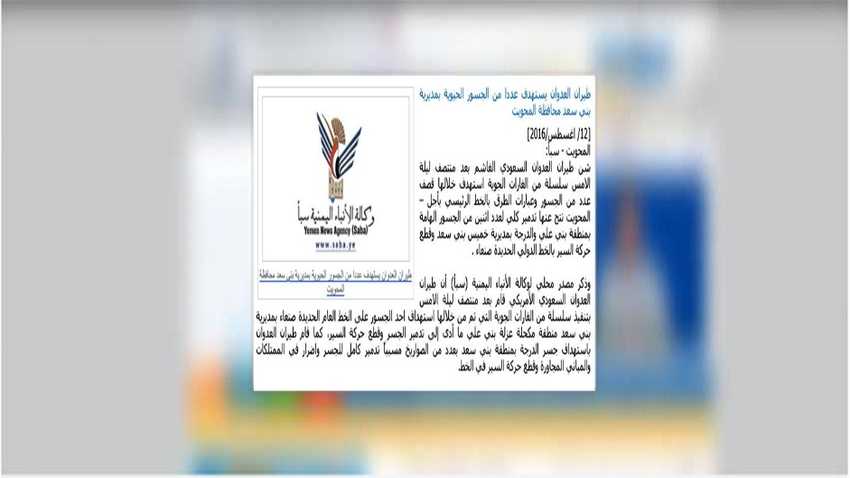 A picture from Saba News Agency about the incident

The Yemeni news agency “Saba” claims the targeting happened after midnight. With the news agency’s report and the timestamp of the first post on Facebook alerting of the attack, Yemeni Archive was able to confirm that the attack occurred at 01:00 AM local time.

To accurately determine the geographic location of the attack, Yemeni Archive used visual content from stills taken from reports on the attack (the Yemen Today channel, Al-Masirah TV). Yemeni Archive created a panoramic image, using the Al-Masirah TV report published after the attack, showing the geographic landmarks visible from the right to the northern side of the bridge. These landmarks shown in the panorama include a mountain range with a shape that matched terrain level satellite images taken from Google Earth. 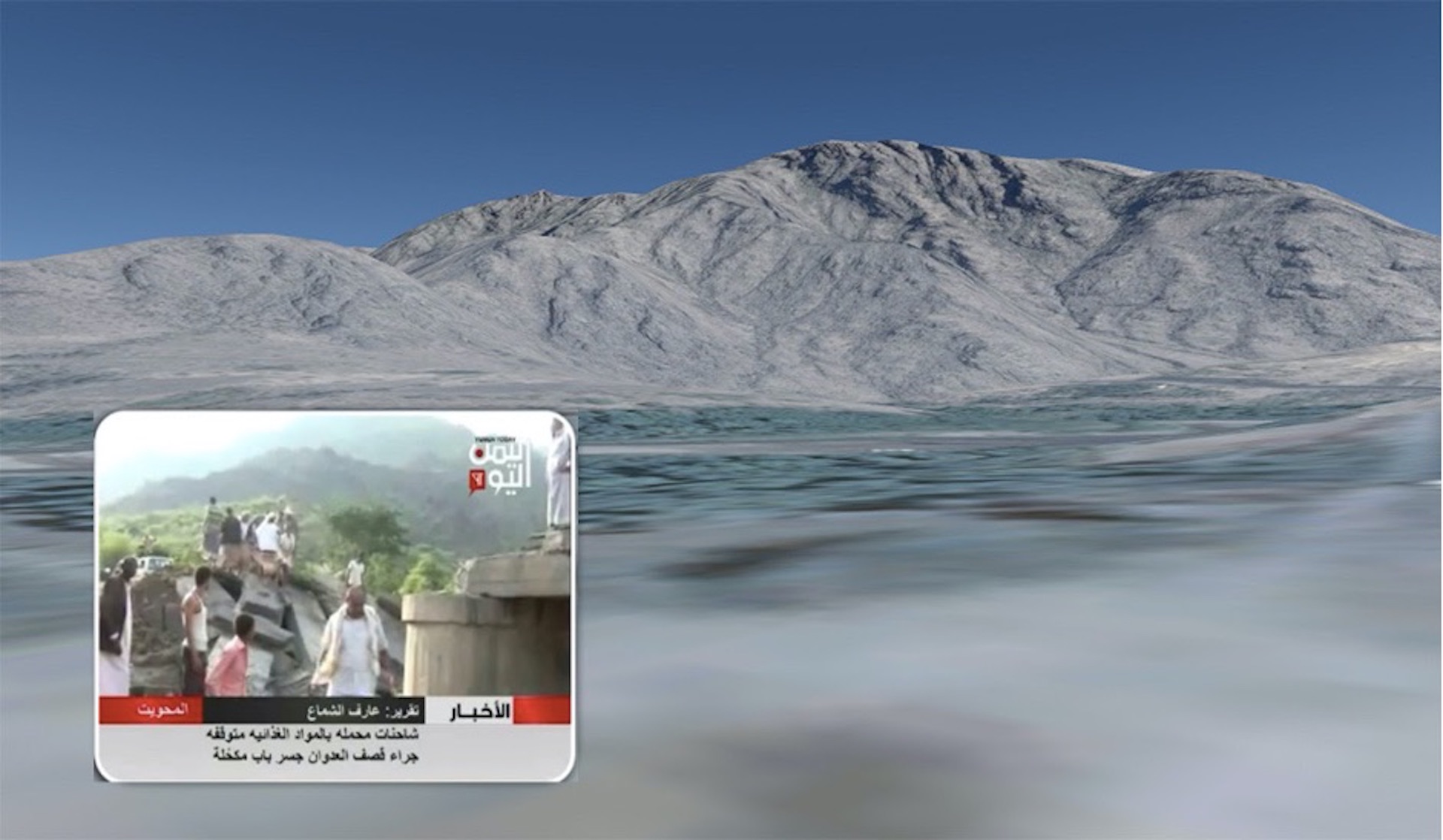 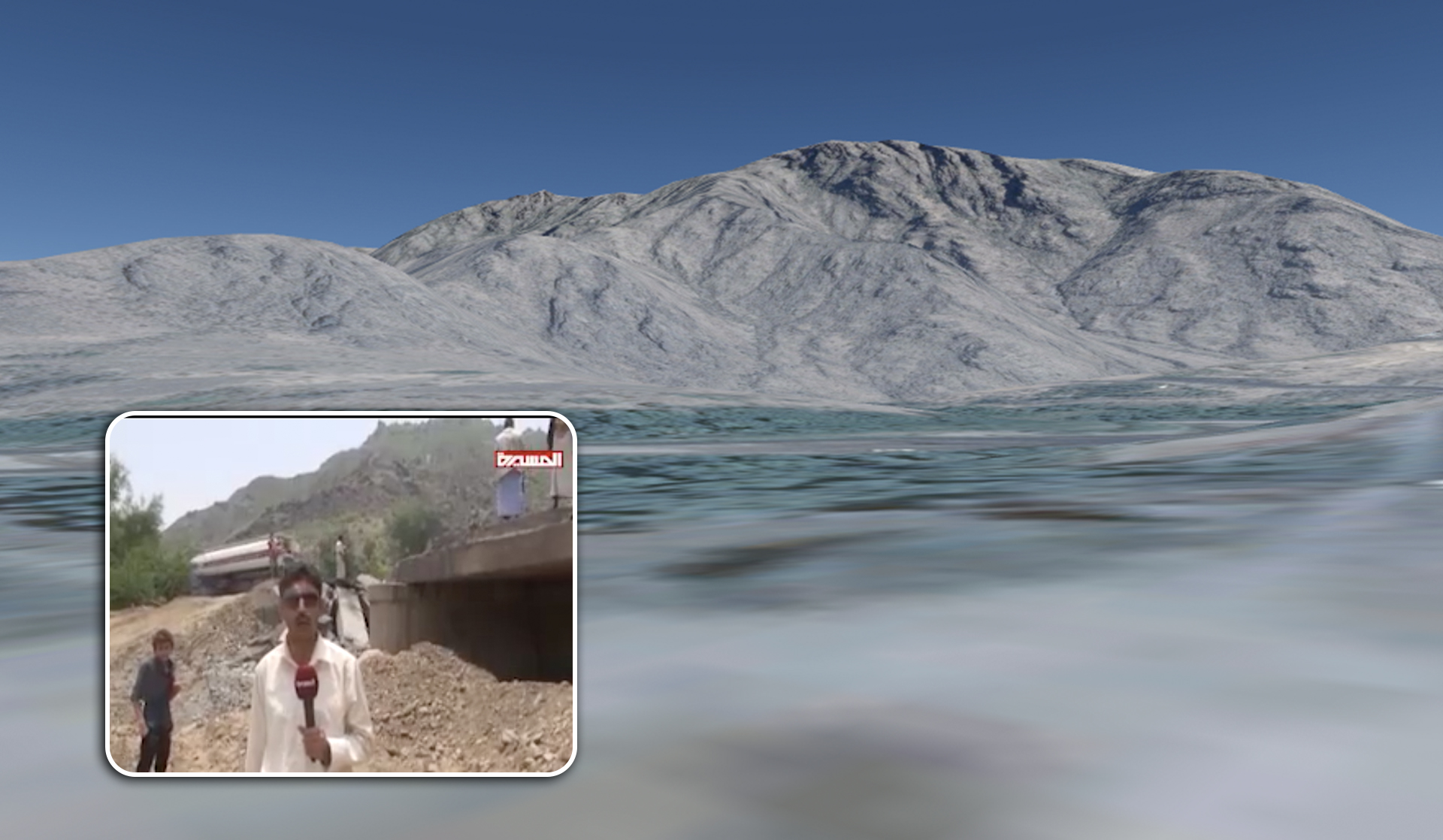 Lastly, the investigations team identified a few white houses that appeared behind the targeted bridge in a scene from the Yemen Today channel video report. These landmarks matched satellite images taken from Google Earth. 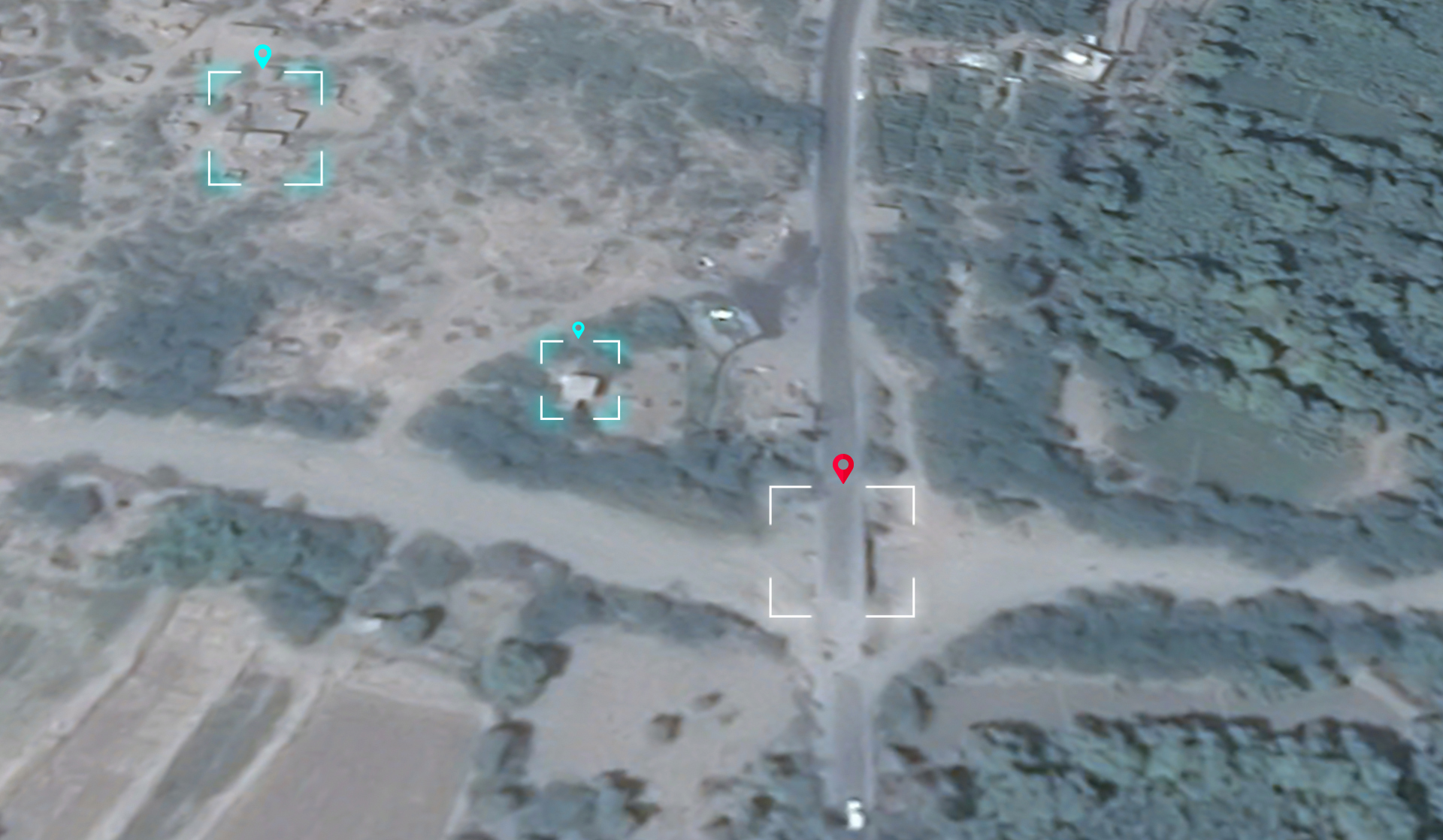 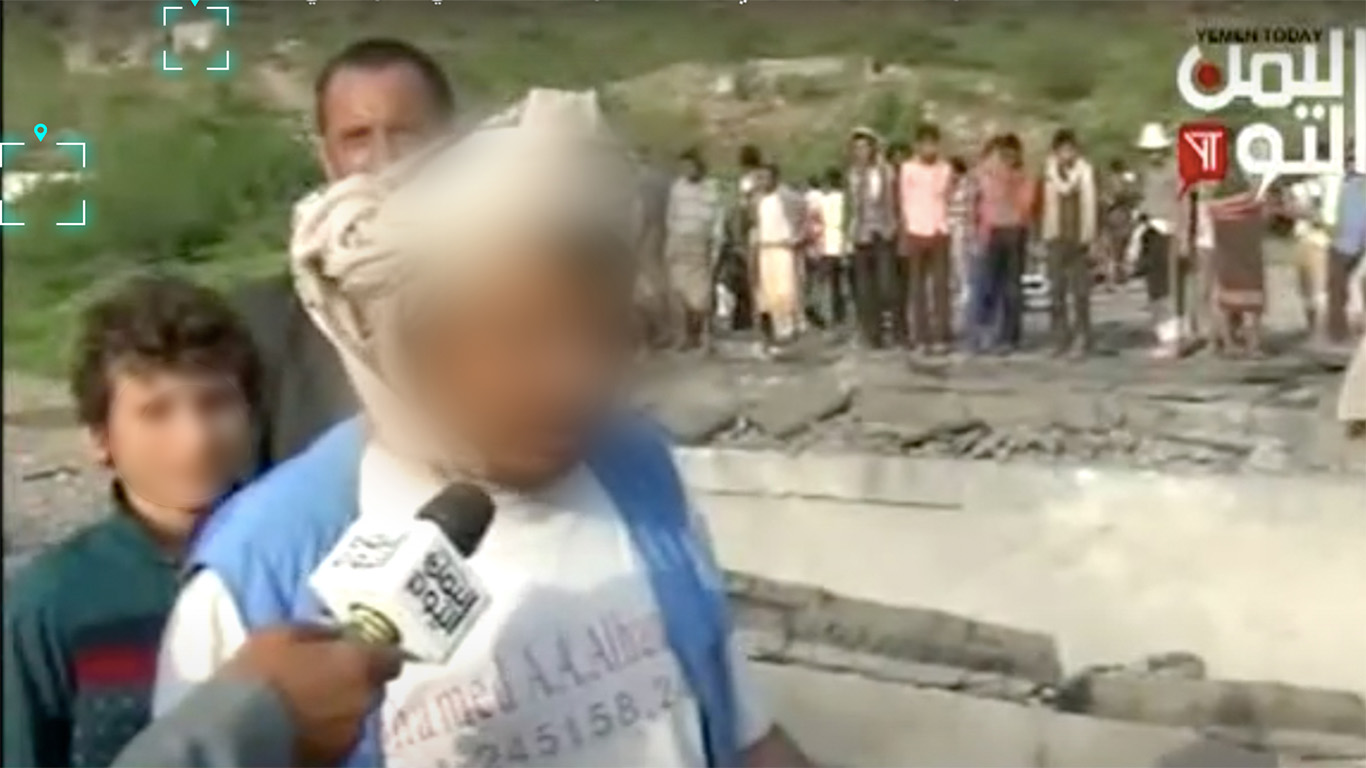 After analyzing landmarks and matching them with satellite imagery from Google Earth, Yemeni Archive was able to geolocate the images and videos posted online showing the aftermath of the attack on the Bab Makhaleh Bridge in the Bani Saad District of the Al Mahwit Governorate and determined the location of the attack to be at the coordinates 15.189395535406481, 43.443857473439294. 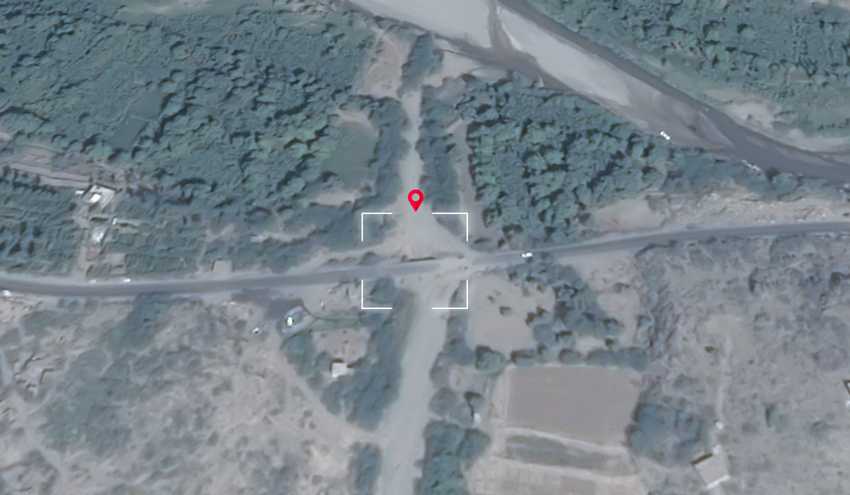 In October of this year, Yemeni Archive published a new report titled ”Attacks on Access” documenting 131 attacks on bridges in Yemen between 2015-2019. The damage to bridges blocks key transport routes for food and humanitarian aid.

The Makhala Bridge is critical for supplying the capital and neighboring governorates with food and fuel. The targeting of the bridge did not result in any human casualties, but there were material losses as trucks carrying goods were unable to pass and as a result goods were damaged. Residents tried creating an alternative road adjacent to the bridge. However the road was too rough for large trucks to drive on as is shown in a video published by Al-Masirah TV.

We analyzed the geographic landmarks that appeared in the scenes of video reports from the Yemen Today channel, Yemen News TV, and Al-Masirah TV, which shows a destroyed pillar as a result of the targeting. These landmarks were identical in all videos posted after the attack. 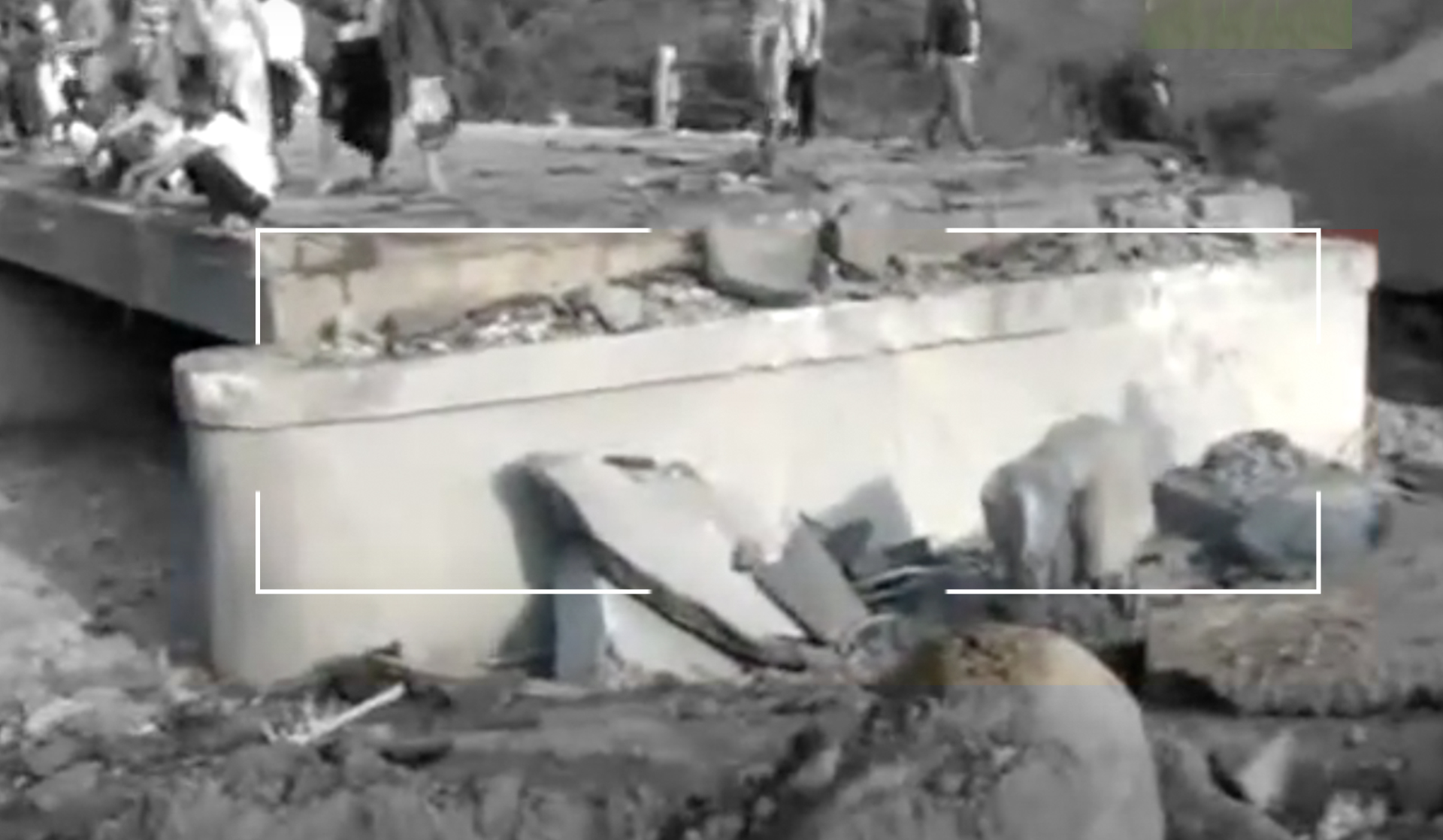 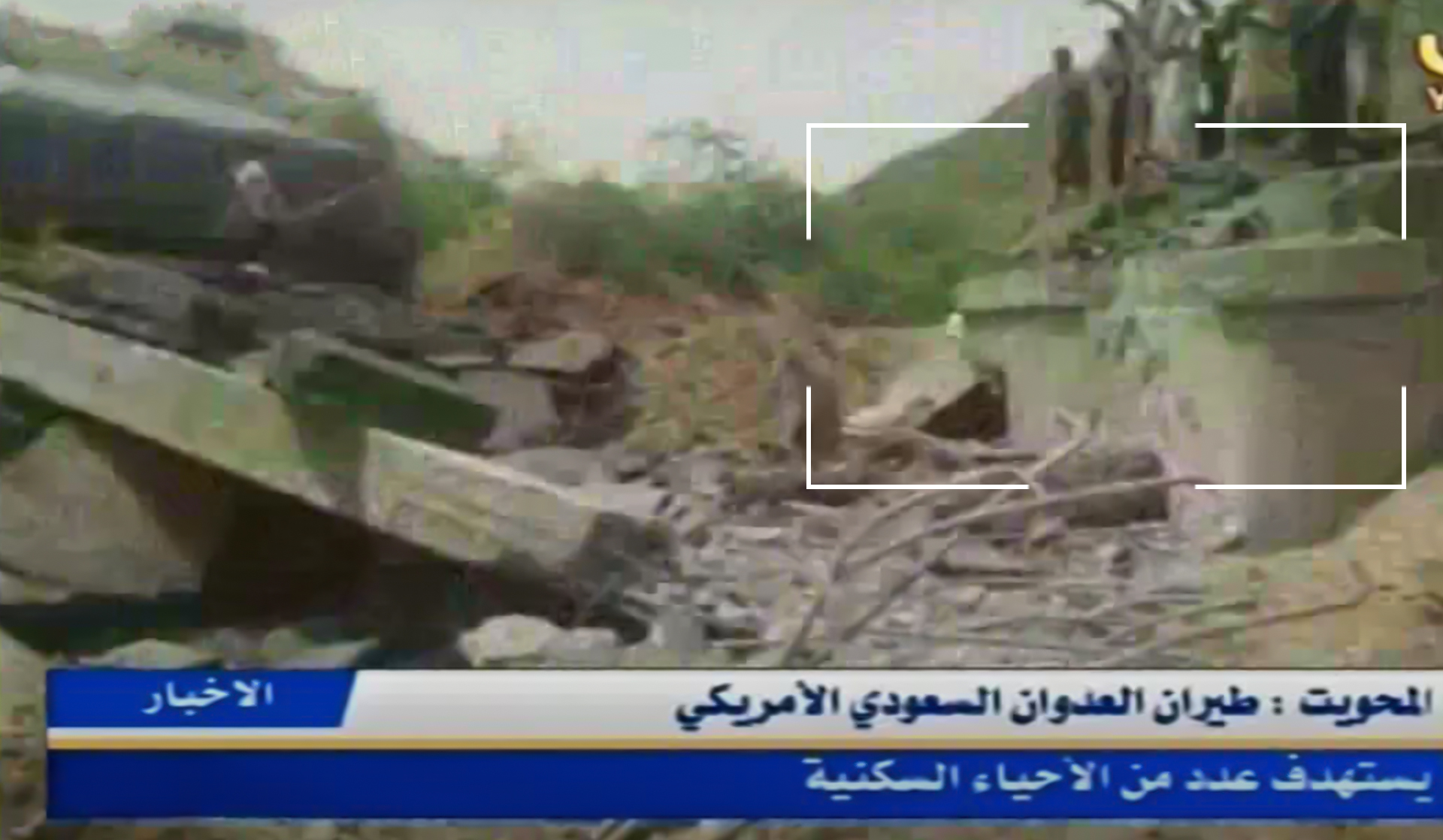 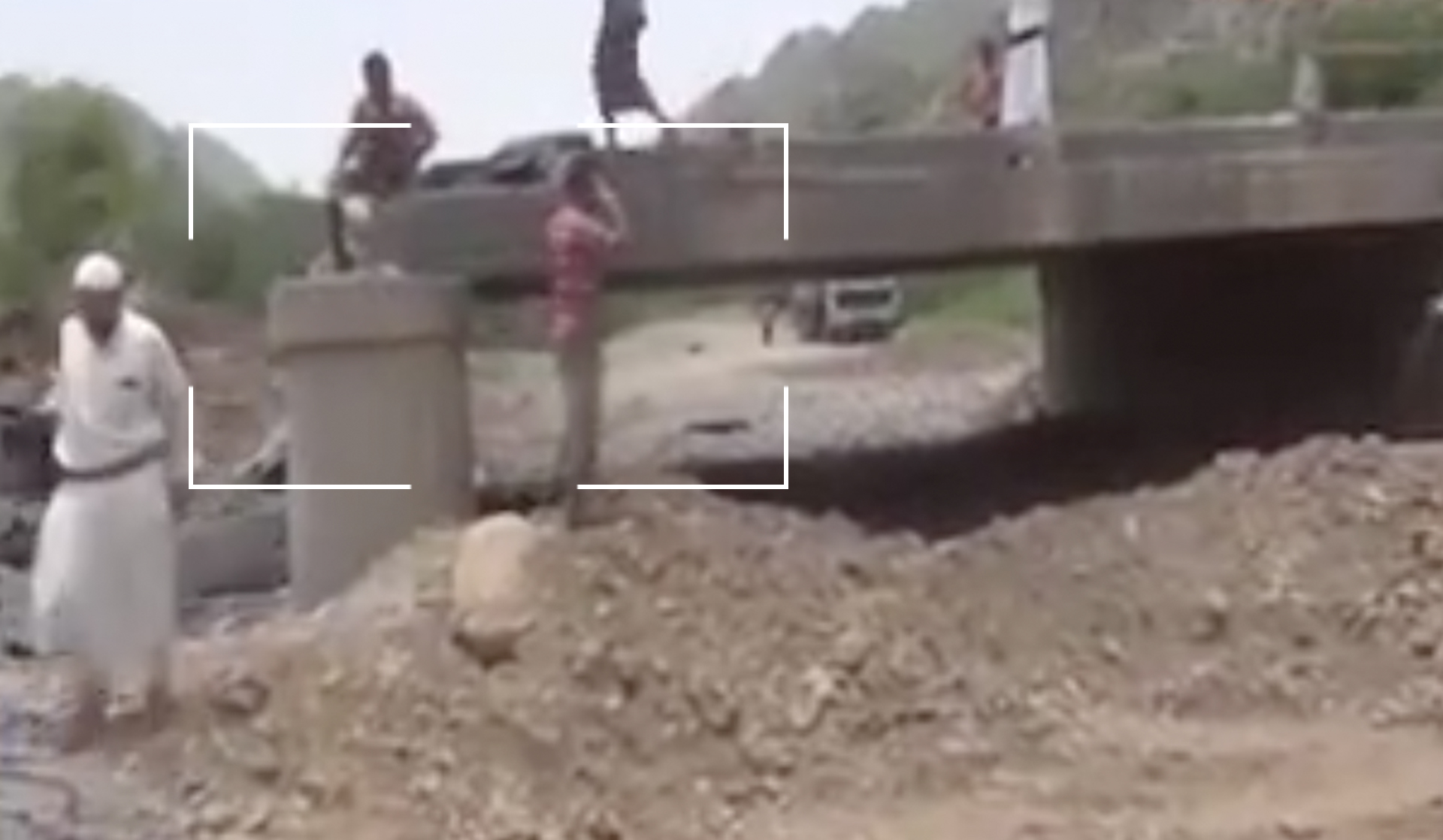 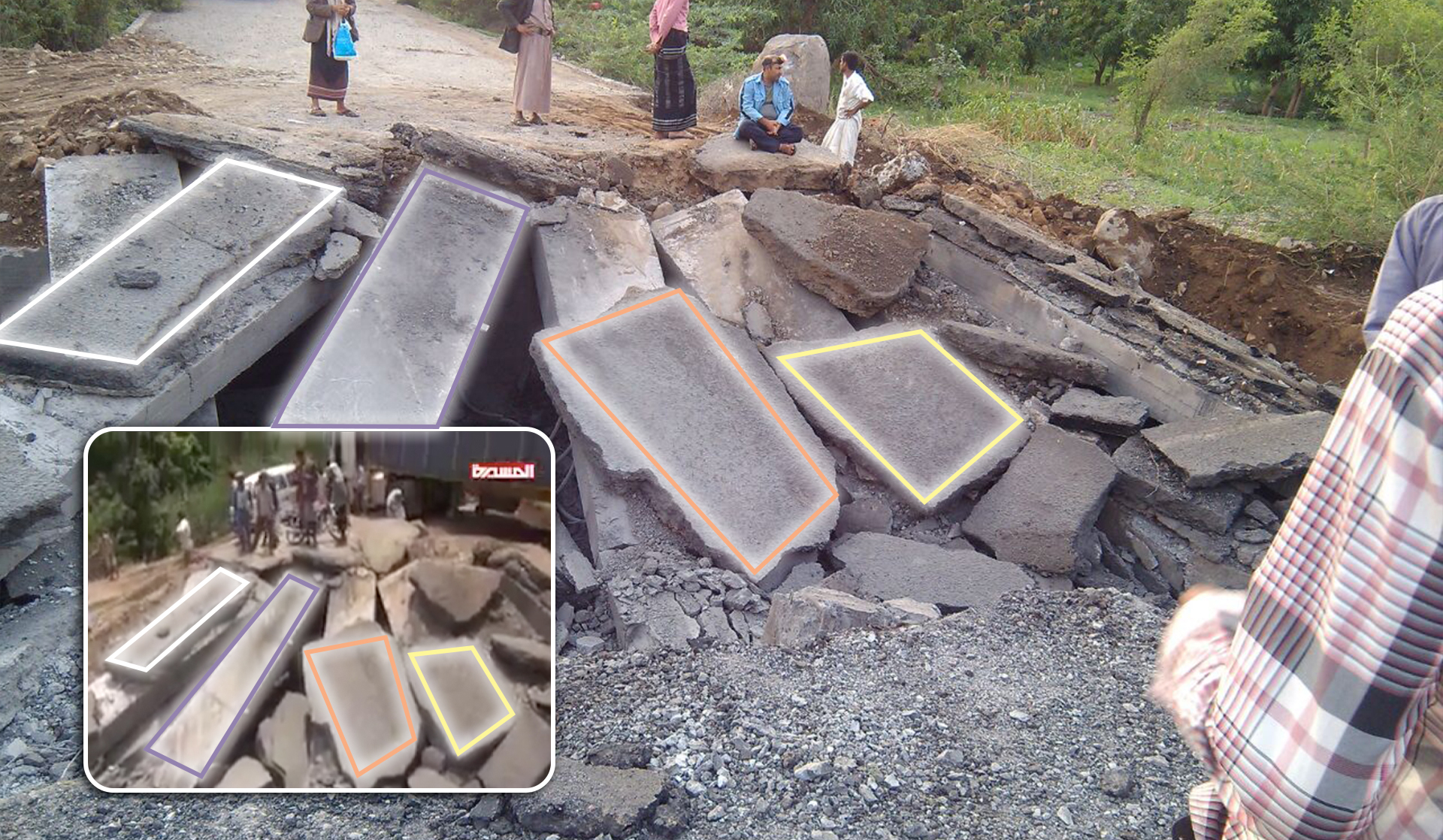 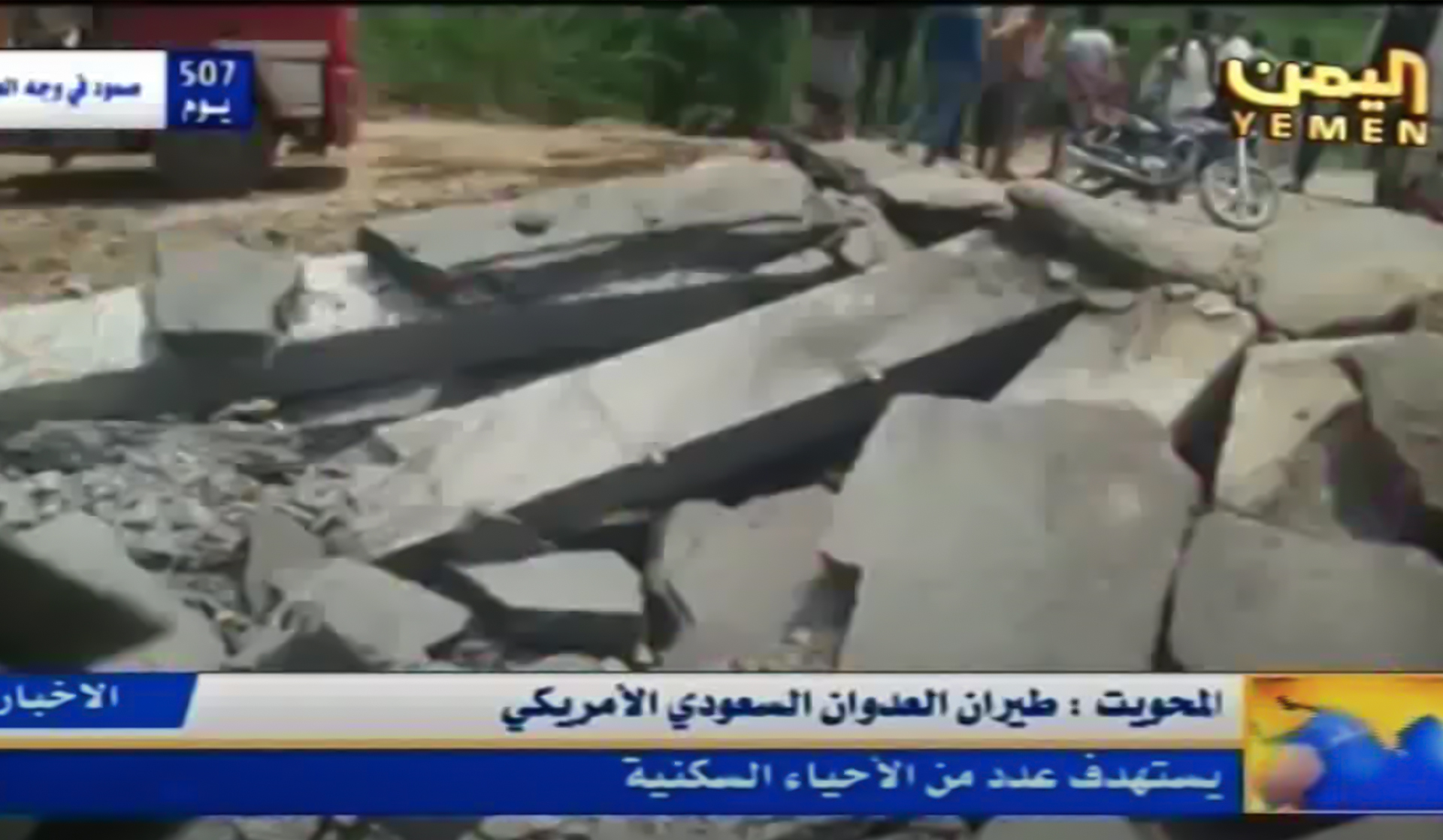 To illustrate the damage caused by the bombing, we compared landmarks of the destruction with satellite images taken from Google Earth Pro of the bridge before and after the attack. 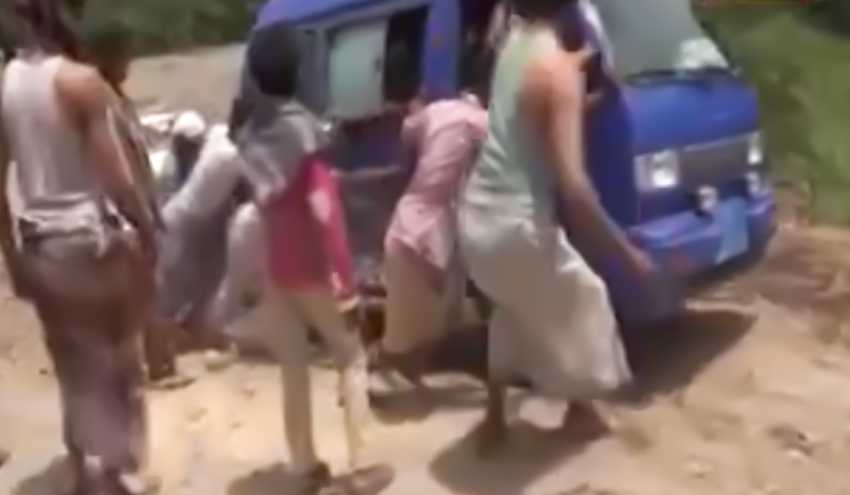 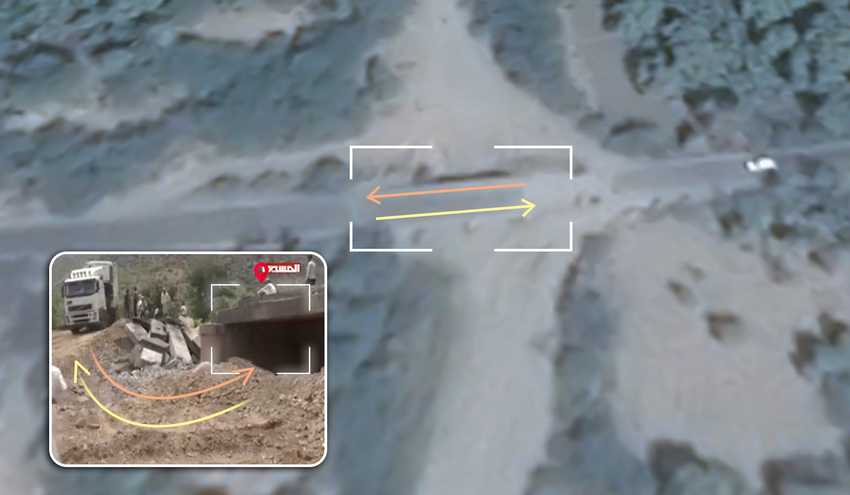 The Bab Makhaleh Bridge was repaired and reconstructed by the “General Corporation For Roads And Bridges”, according to a post by the General Corporation’s official Facebook page The page mentioned that the bridge was attacked with several airstrikes destroying one of the bridge’s three pillars. These destroyed pillars are shown in video reports from Yemen Today TV channel and Al-Masirah TV. The General Corporation’s official Facebook page also published several pictures showing the bridge’s restoration and reconstruction process. To assess their validity , Yemeni Archive analyzed these pictures and matched them with the satellite imagery provided by Google Earth of the bridge before and after the attack. 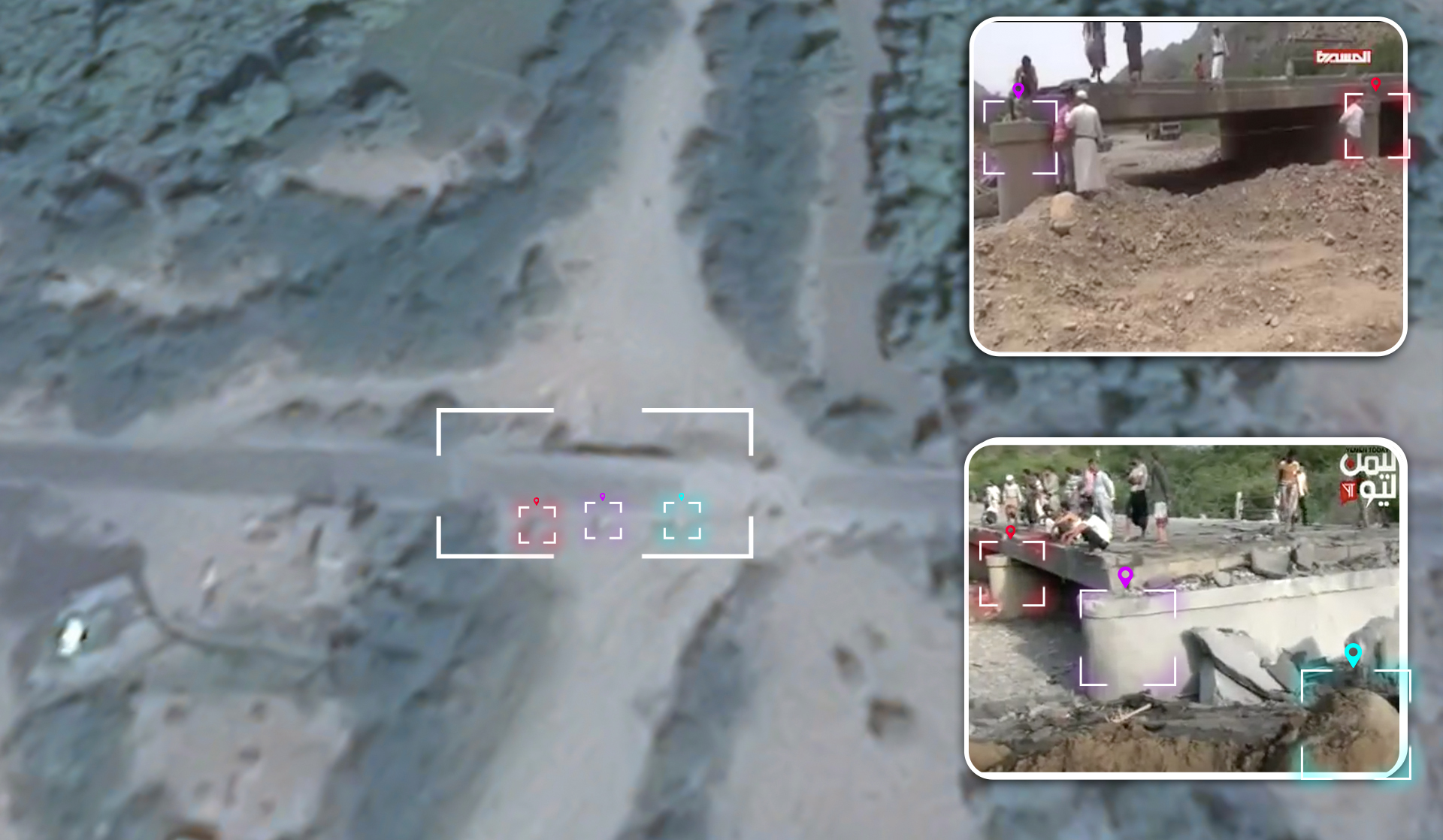 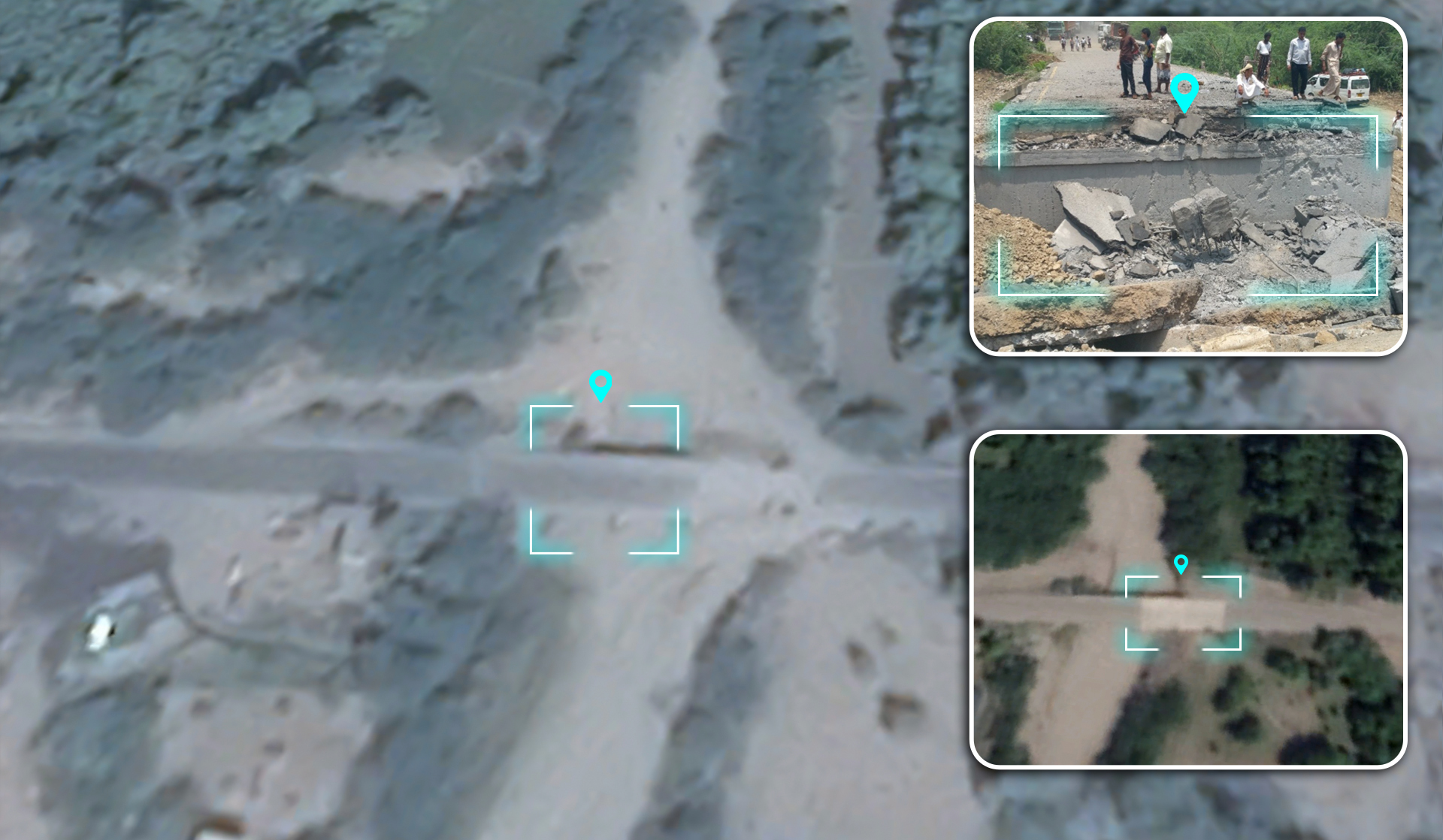 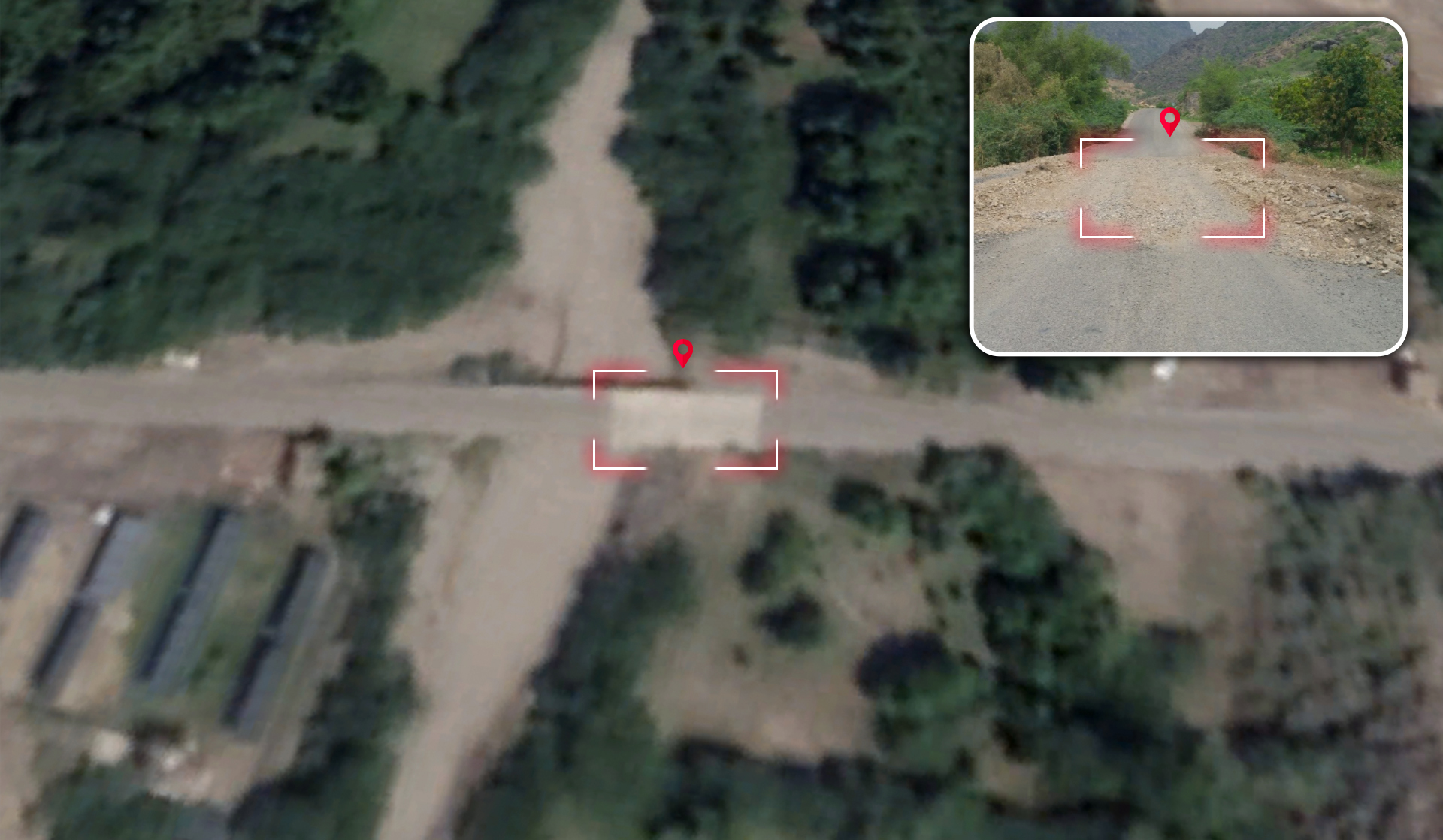 After verifying and analyzing open source information, the Yemeni Archive team concluded that Saudi-led coalition warplanes carried out an attack on the Bab Makahleh

Bridge in the Al Mahwit Governorate with several airstrikes on November 12, 2016.

According to the visual evidence and sources analyzed, several airstrikes targeted the Bab Makahleh Bridge, destroying one of the bridge’s pillars and permanently cutting off cars in the area from passing over the bridge. Although Yemeni Archive did not find any evidence in the open source content of weapon and ammunition remnants used in the attack, the implementation of the airstrike attack strongly indicates that the Saudi-led coalition forces were responsible for the attack.