An investigation reveals the photo journalist was shot and killed by a sniper attack in Taiz on 16 February 2016.

On 16 February 2016, a photojournalist was shot dead by a sniper, in Taiz city when he was coming back with a group of journalists from a mission to document the fire that broke out in a factory, following military confrontations between “the Popular Resistance Forces” and “the Houthi-Saleh forces” in Alhsb neighbourhood in Taiz city centre.

In March 2015, the Houthi-Saleh forces imposed a siege on Taiz city from all four sides. These forces took control of the east of Al-Ukhwah Hill and Oqba Jamal Street, and of the north on Al-Sitteen Street and the Highlands in the north there, and of the south, the villages of Jabal Sabr and the historic Cairo Citadel and the surrounding areas. In the west they took control of Alhsb neighbourhood and its surroundings, imposing a siege on civilians there, and the Popular Resistance Forces, in an area of not more than 5 km2. These areas become lines of confrontations. In February 2016, the Popular Resistance Forces in Taiz managed to progress after confrontations with the Houthi-Saleh forces from the western side, and to control parts of the Alhsb neighbourhood in Al-Mudhaffar District , one of the city’s four main districts that constitute the centre of Taiz Governorate. The confrontations caused a fire in a food factory after it was hit by a rocket-propelled grenade in the Alhsb. Photographers and journalists hurried to cover the fire, including photojournalist Ahmed AlShaibani, who was shot dead by a sniper in the head, while running back to one of the city’s main roads. There have been many changes in the map of military control of the city center and its countryside and western coast districts. The names of the forces also changed. The Popular Resistance Forces transformed into a regular army affiliated with the Ministry of Defense of the Yemeni government.

On 16 February 2016, social media platforms and video news circulated the news that a photojournalist working for the state-run Al-Yemen channel was shot dead, while trying to quickly cross to the other side, in Alhsb neighbourhood in Al-Mudhaffar District in Taiz city center. Photojournalist Ahmed Basha published the first report of the incident on Facebook at 13:37 on the day of the incident, according to an analysis of the timestamp of the post via 4WebHelp.

A video report by Yemen Shabab TV showed the moment when the photojournalist Ahmed AlShaibani was targeted and fell to the ground. Footage from multiple sources (Al-Jazeera - Wael Al-Absi - Sky News Arabia - Ahmed Al-Bakari) show the targeting from the same place at different times and angles, some of which are identical, while other visual content needed verification. 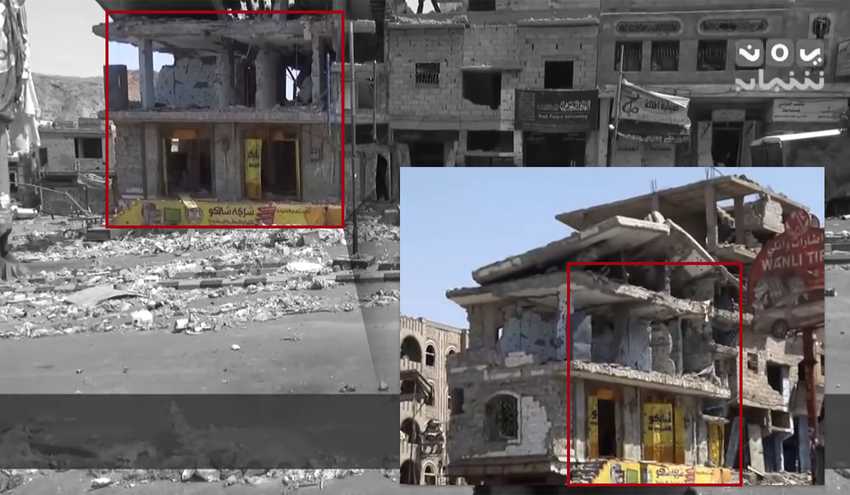 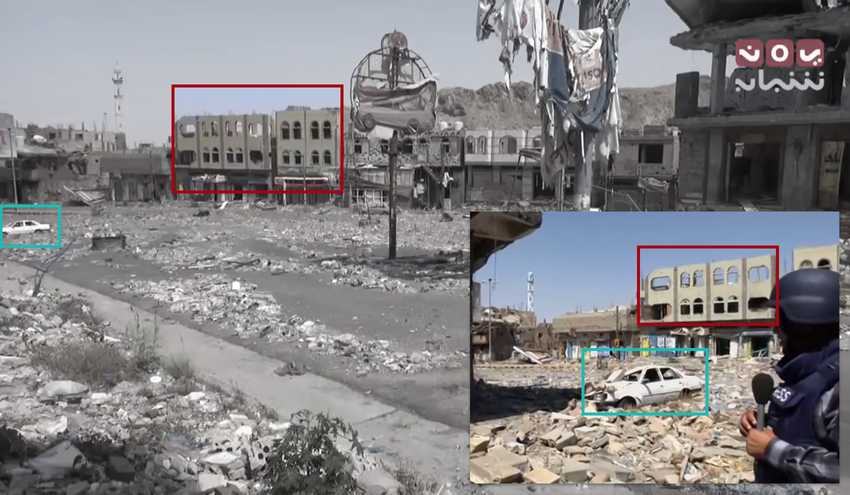 Wael Al-Absi posted on his Facebook a video of the same road that AlShaibani tried to cross at the moment of his death. The video documents the shooting at an armed individual while he was running to the other side.

According to open-source information, photojournalist Ahmed AlShaibani was targeted in AlHsb in Taiz. The visual content published by (Yemen Shabab TV - Wael Al-Absi - Sky News Arabia) included evidence and landmarks from the area, through which the location where the journalist was killed can be accurately determined. By identifying landmarks and visual evidence in the visual content from previous sources and comparing them with satellite images, archived at a date close to the time of the incident, it can be confirmed by matching that the site of AlShaibani’s killing is at coordinates 13.579752, 43.994491 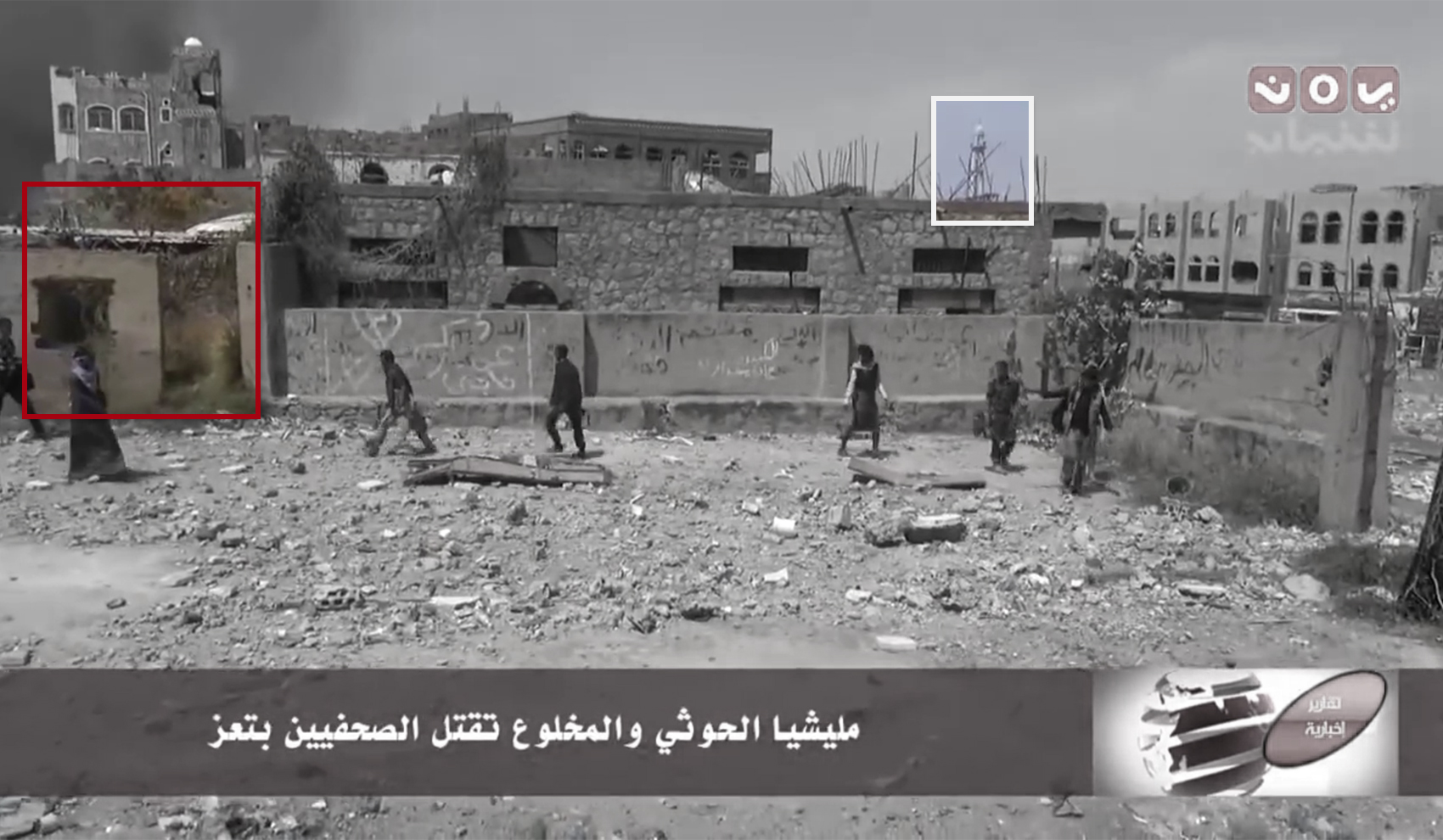 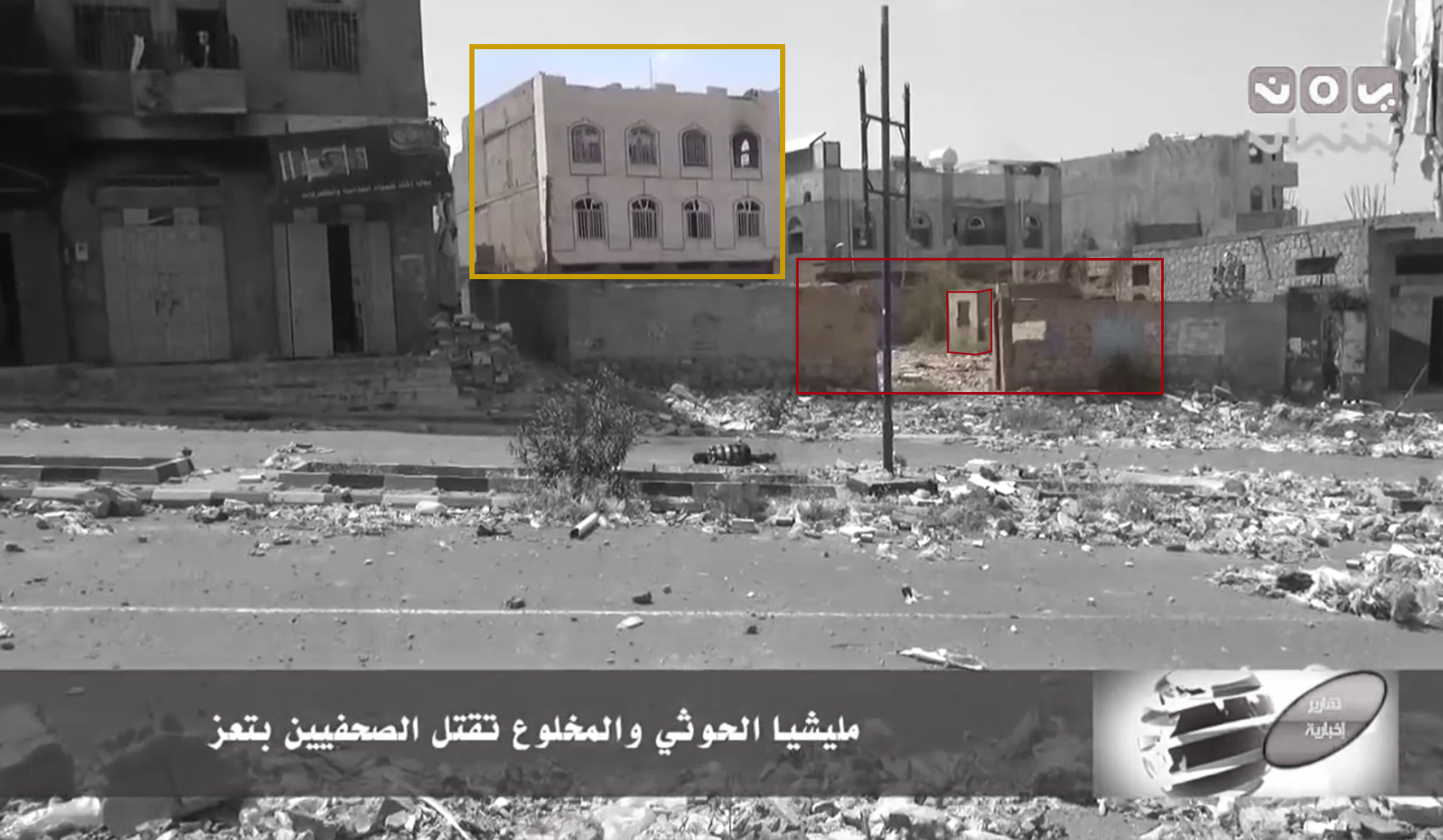 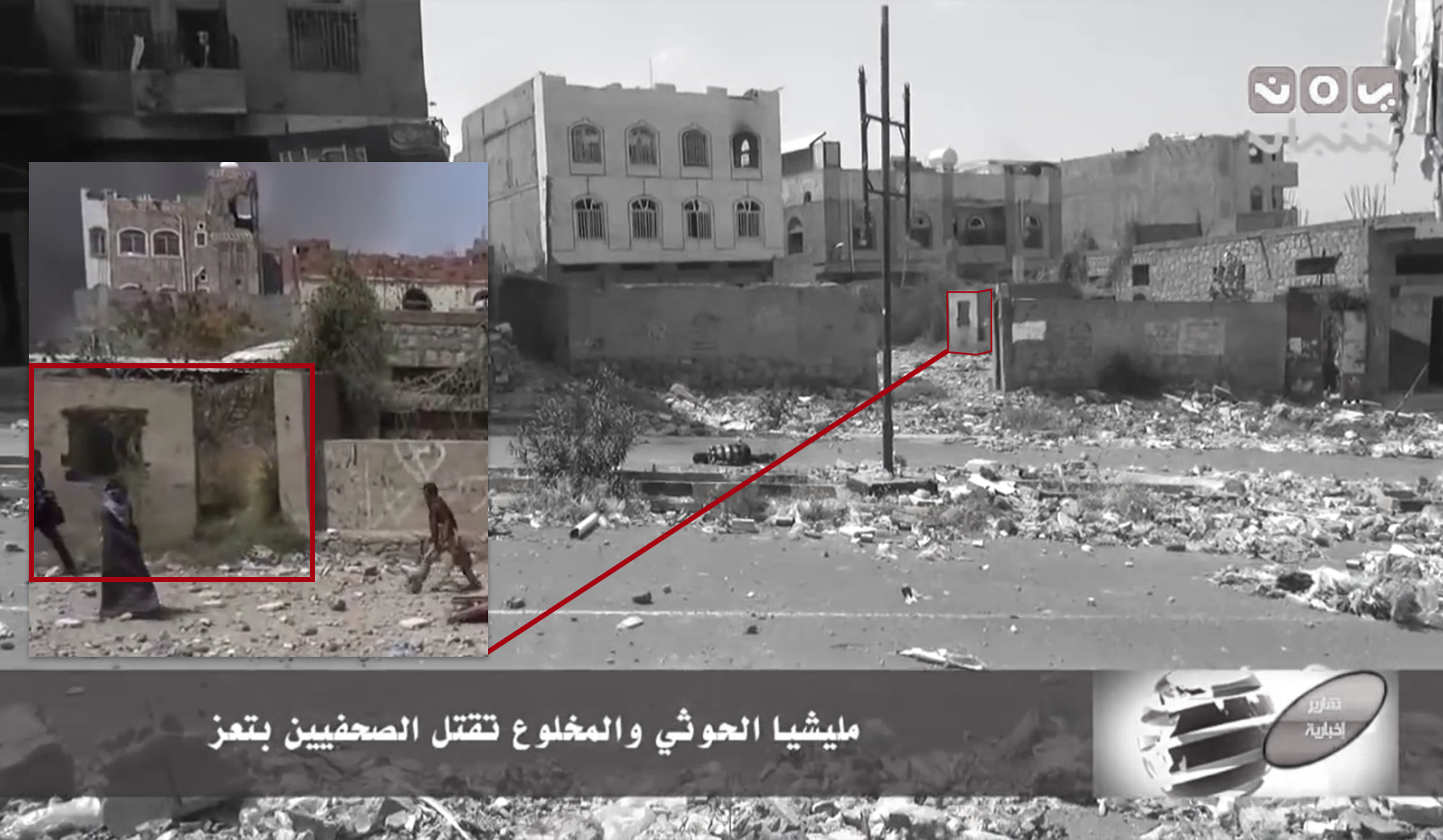 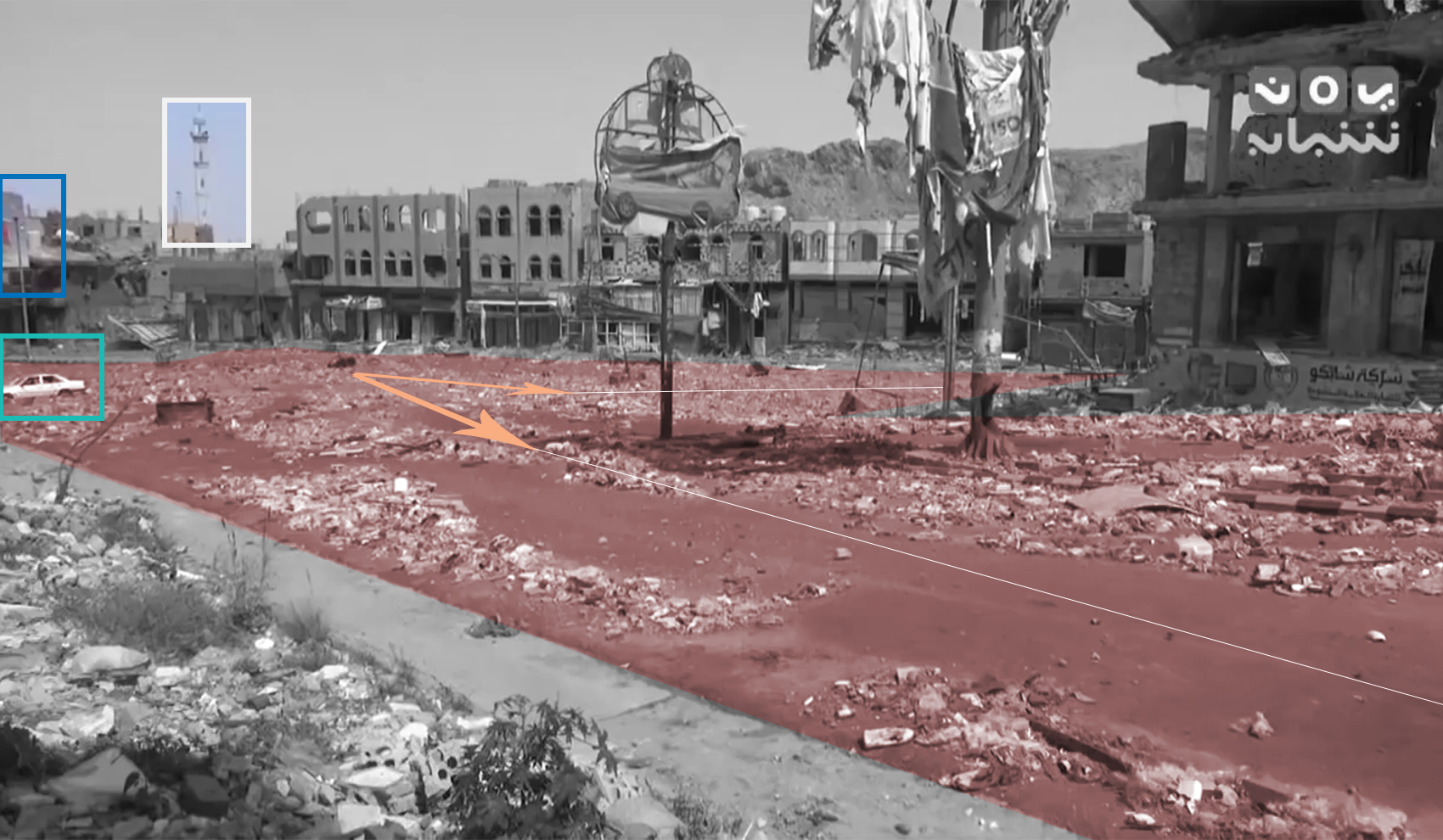 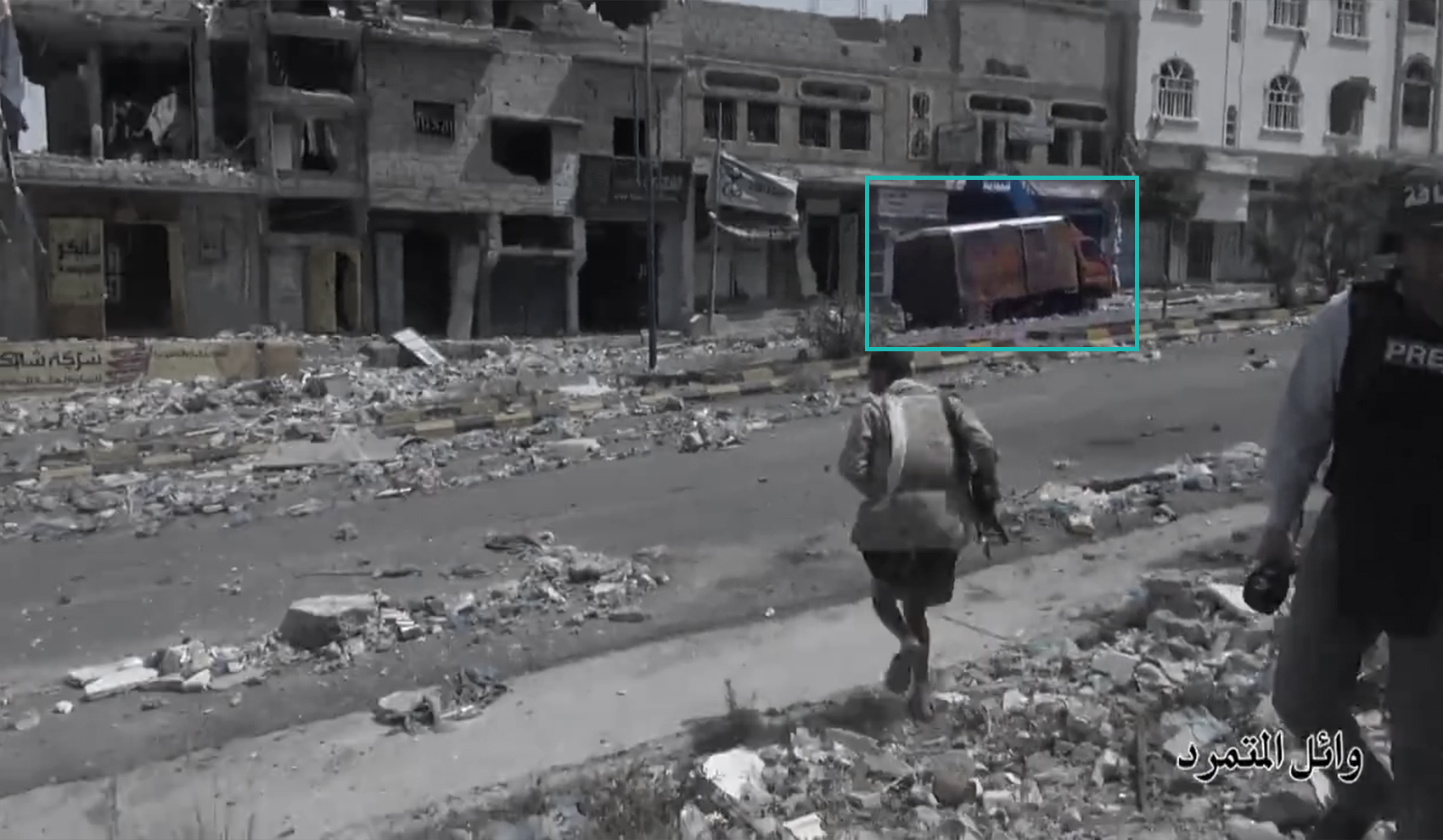 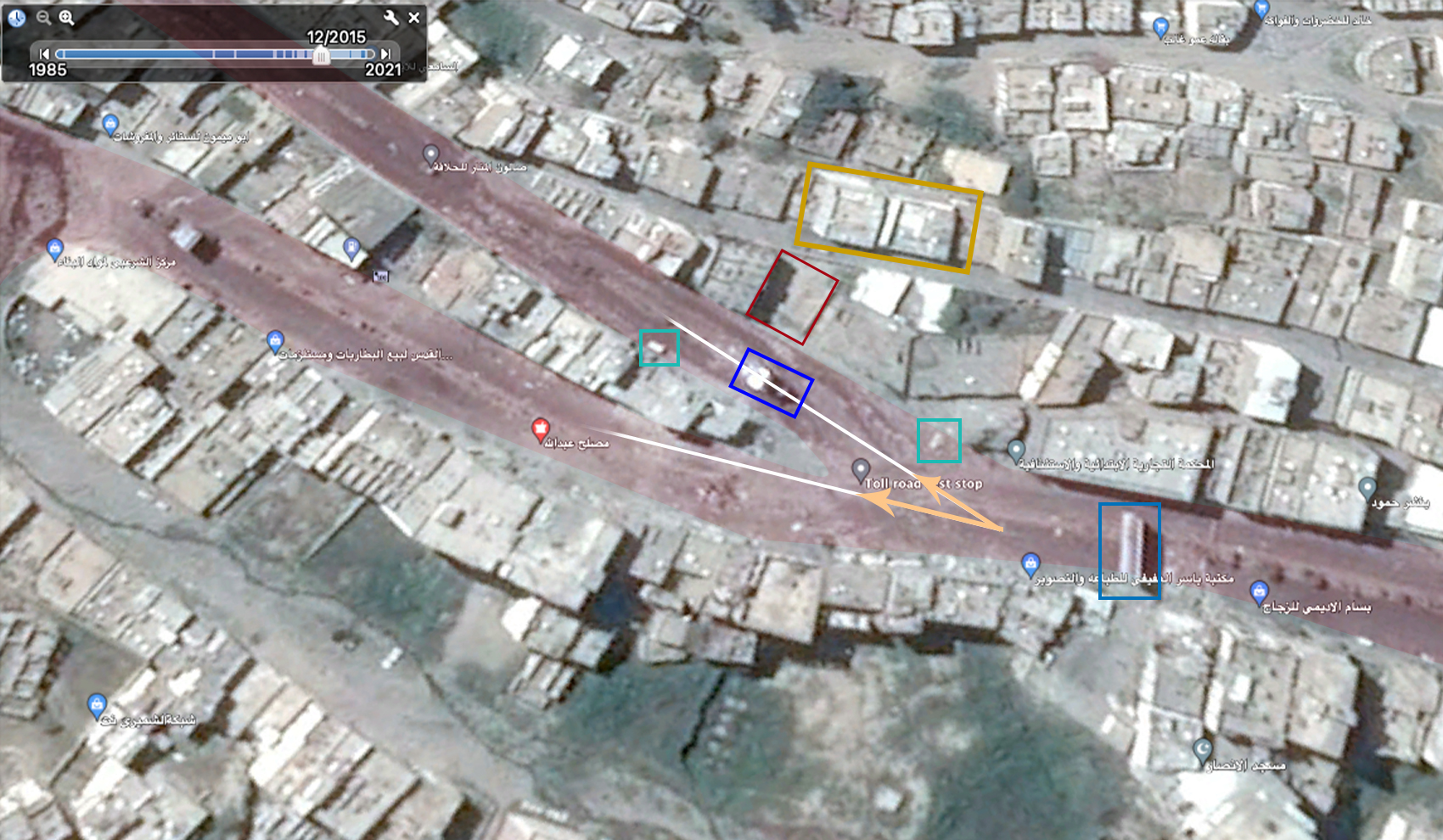 Two photos from after the incident posted on Facebook by Mohammed Al-Qadhi, a Sky News Arabia correspondent, showed Al-Qadhi standing at a short distance from the place where AlShaibani was killed. By comparing the landmarks, the photos can be identified at coordinates 13.580110, 43.994206 for the first photo and 13.575936, 43.996986 for the second. 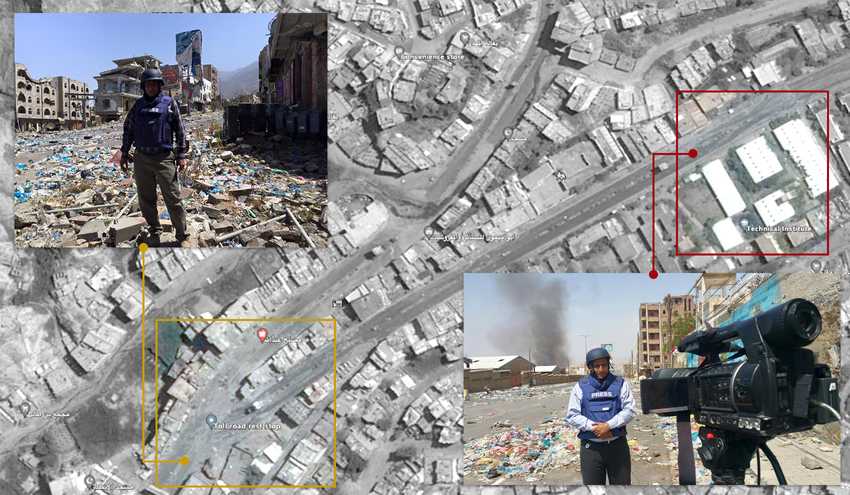 Timestamp analysis of the first report on the incident, by Ahmed Basha’s post, refers to 13:37 local time on 16 February 2016. Using Suncalc to analyse the shadow in Yemen Shabab video indicates the moment AlShaibani was killed as at 12:30, which means that the possible time range for the incident was between 12:30 - 01:37 local time. 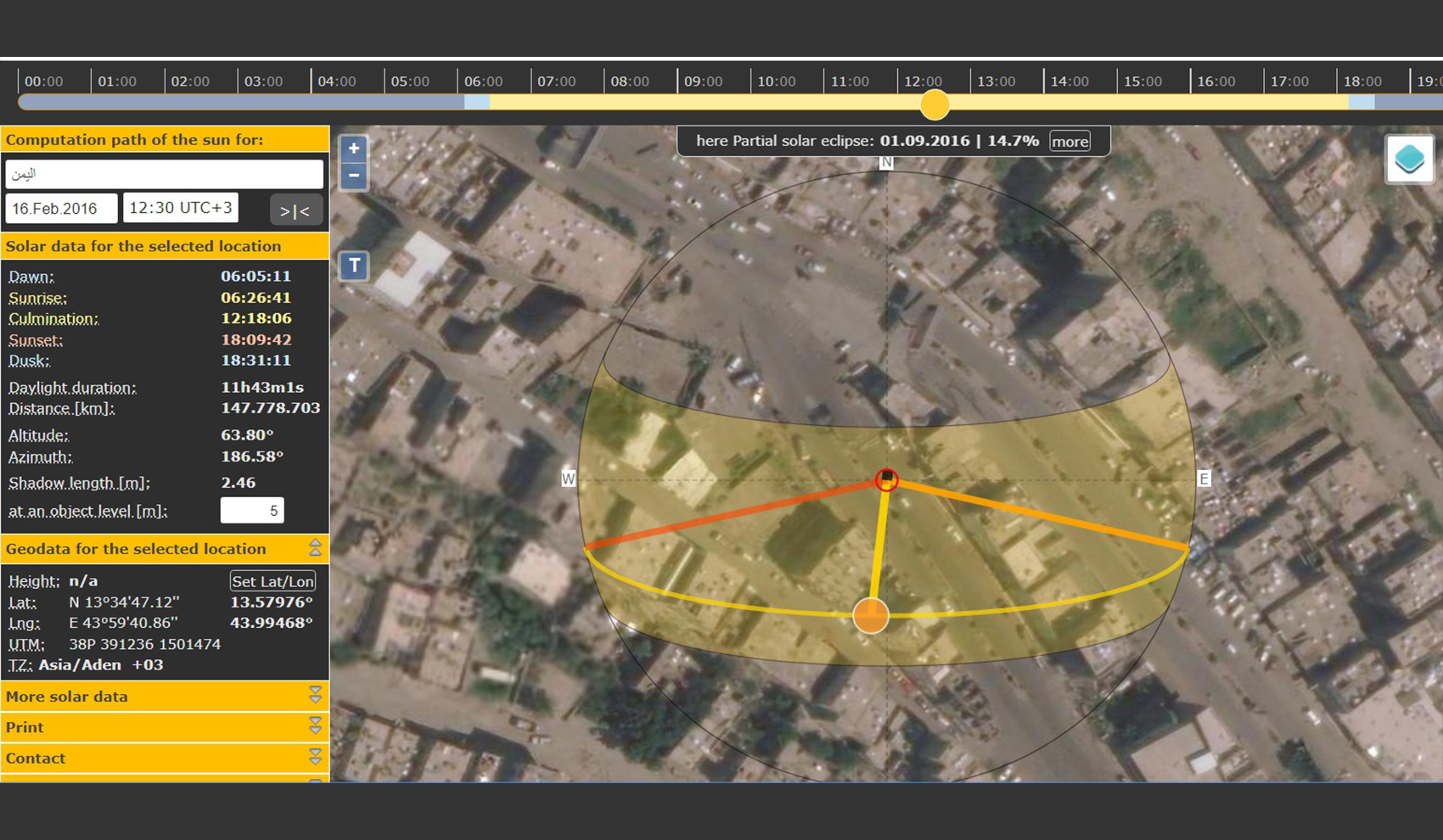 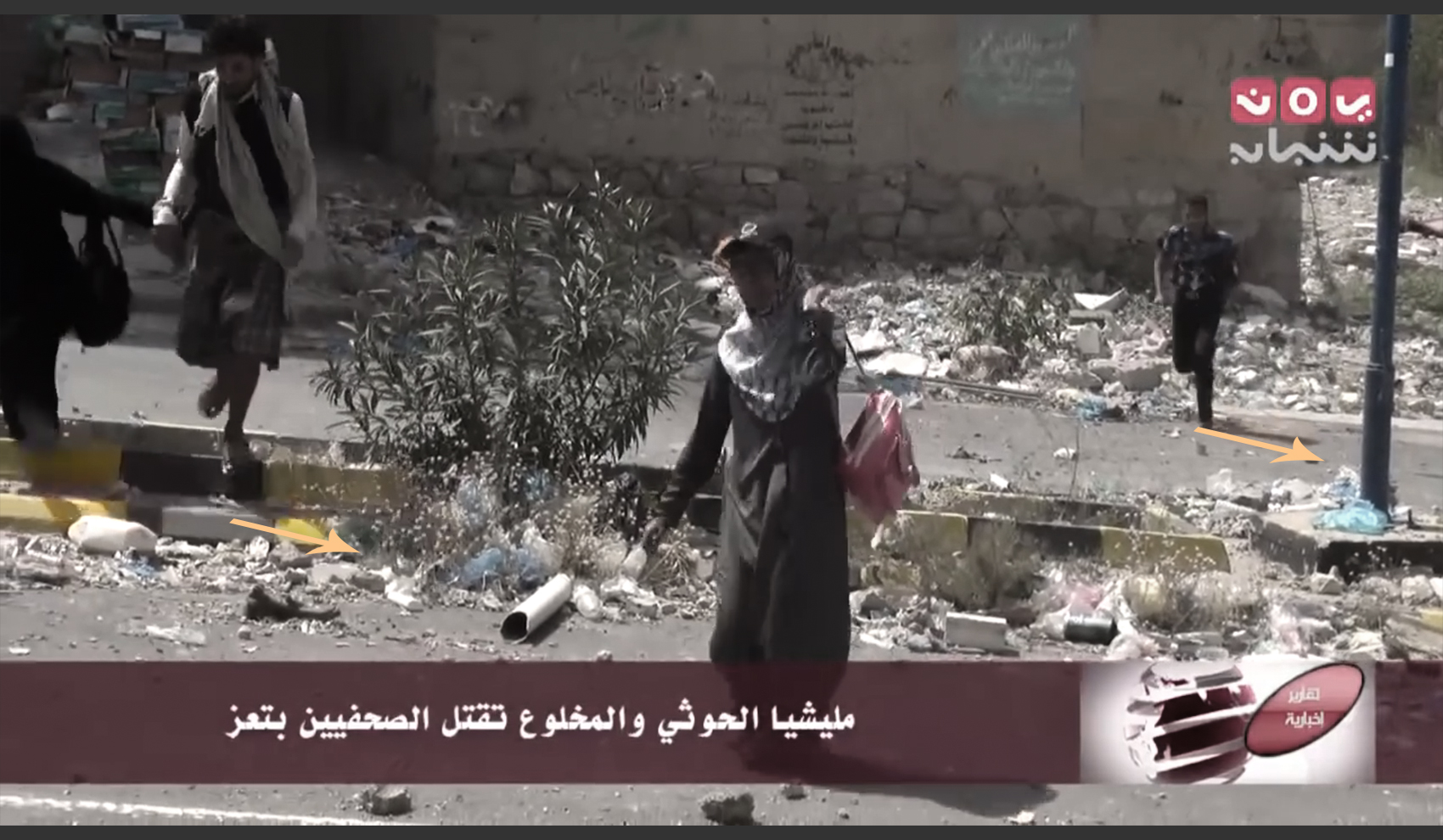 Open-source visual content showed several shots of gunshots targeting passers-by on the same road, including those that penetrated the head of Ahmed AlShaibani, and this footage could lead us to the possible perpetrator. The Yemeni Archive analysed separate videos from the Yemen Shabab video, and the video posted by Wael Al-Absi’s, which show multiple gunshots at the scene. 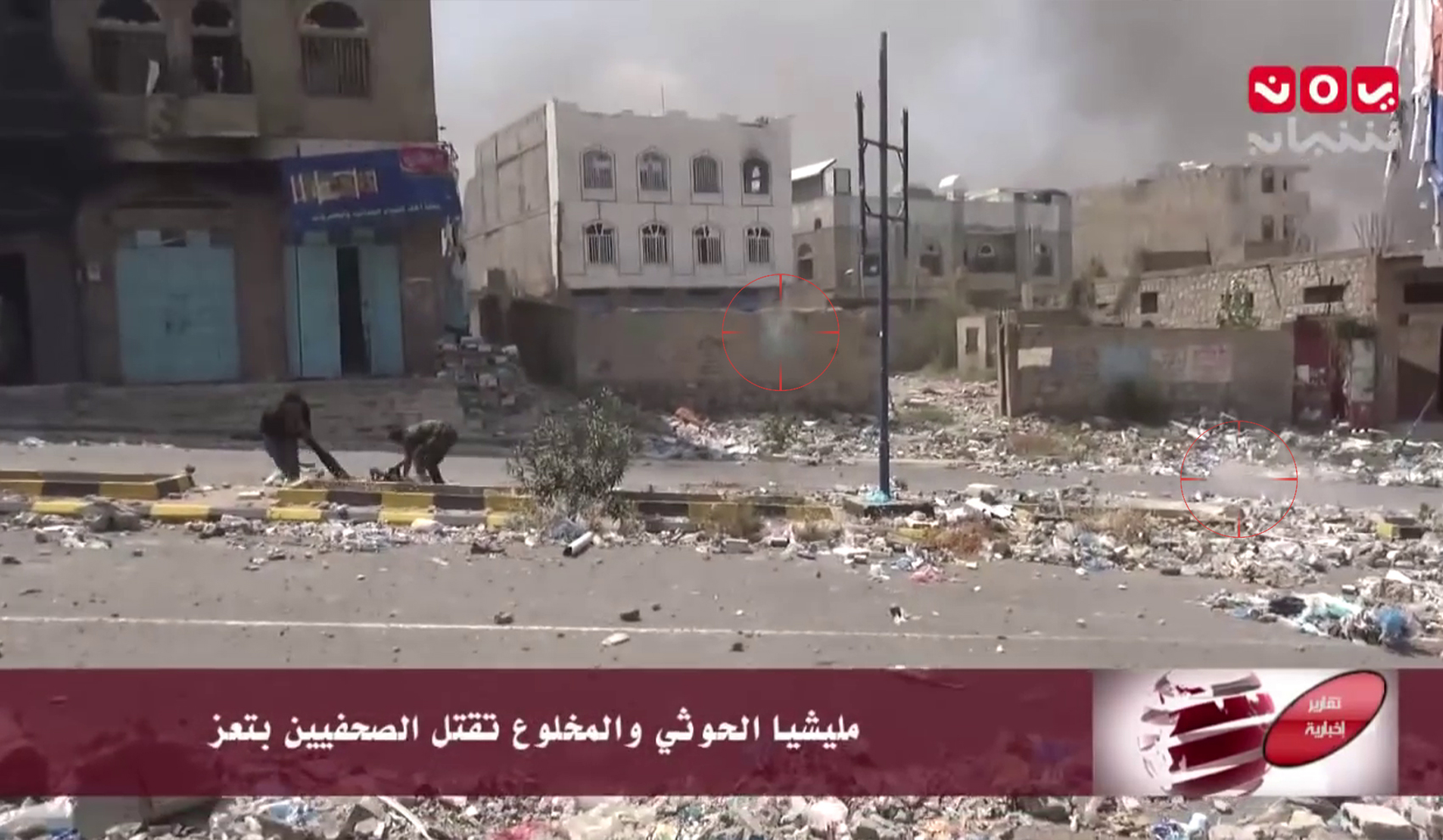 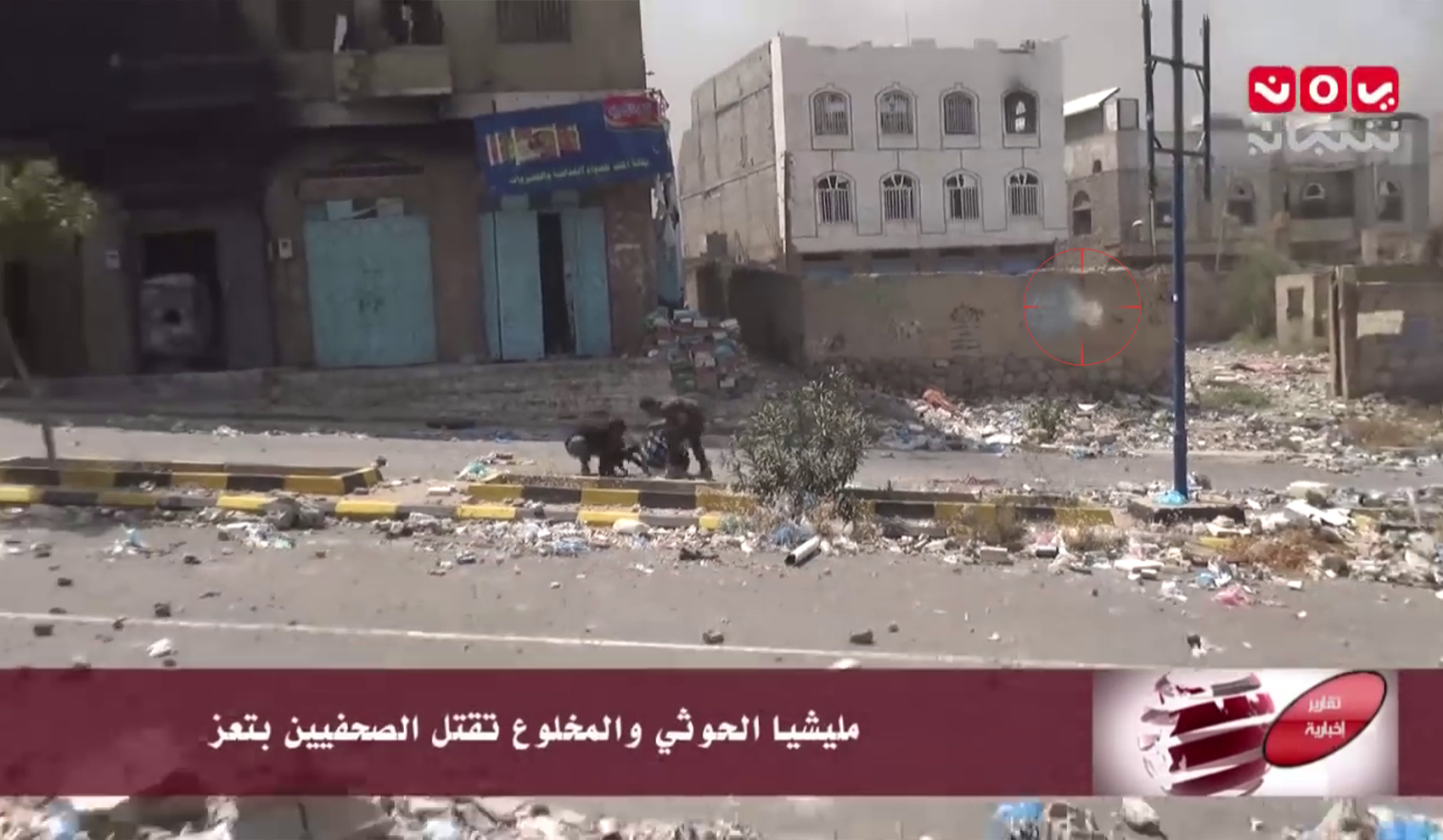 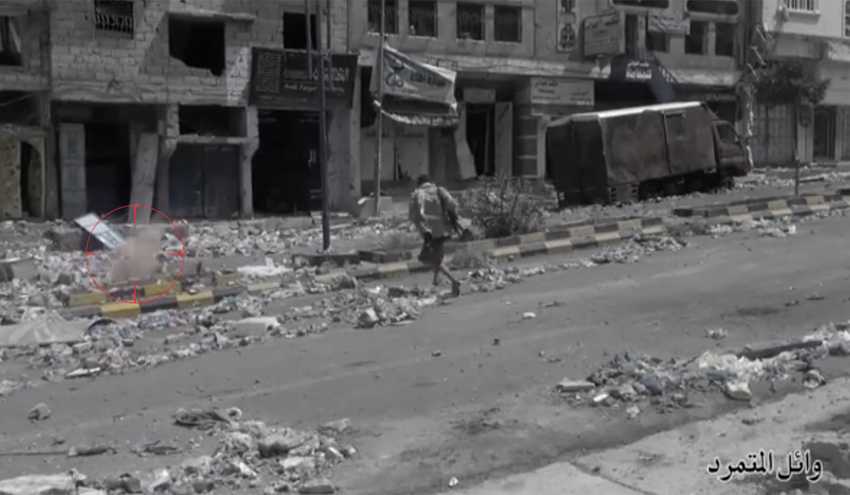 In the Yemen Shabab video of the moment of shooting AlShaibani, we see smoke caused by the bullet hitting the sidewalk of the building next to where AlShaibani exited. The smoke came after the pullet penetrated the body of the photographer, which suggests that the sniper was stationed in the north or northwest. 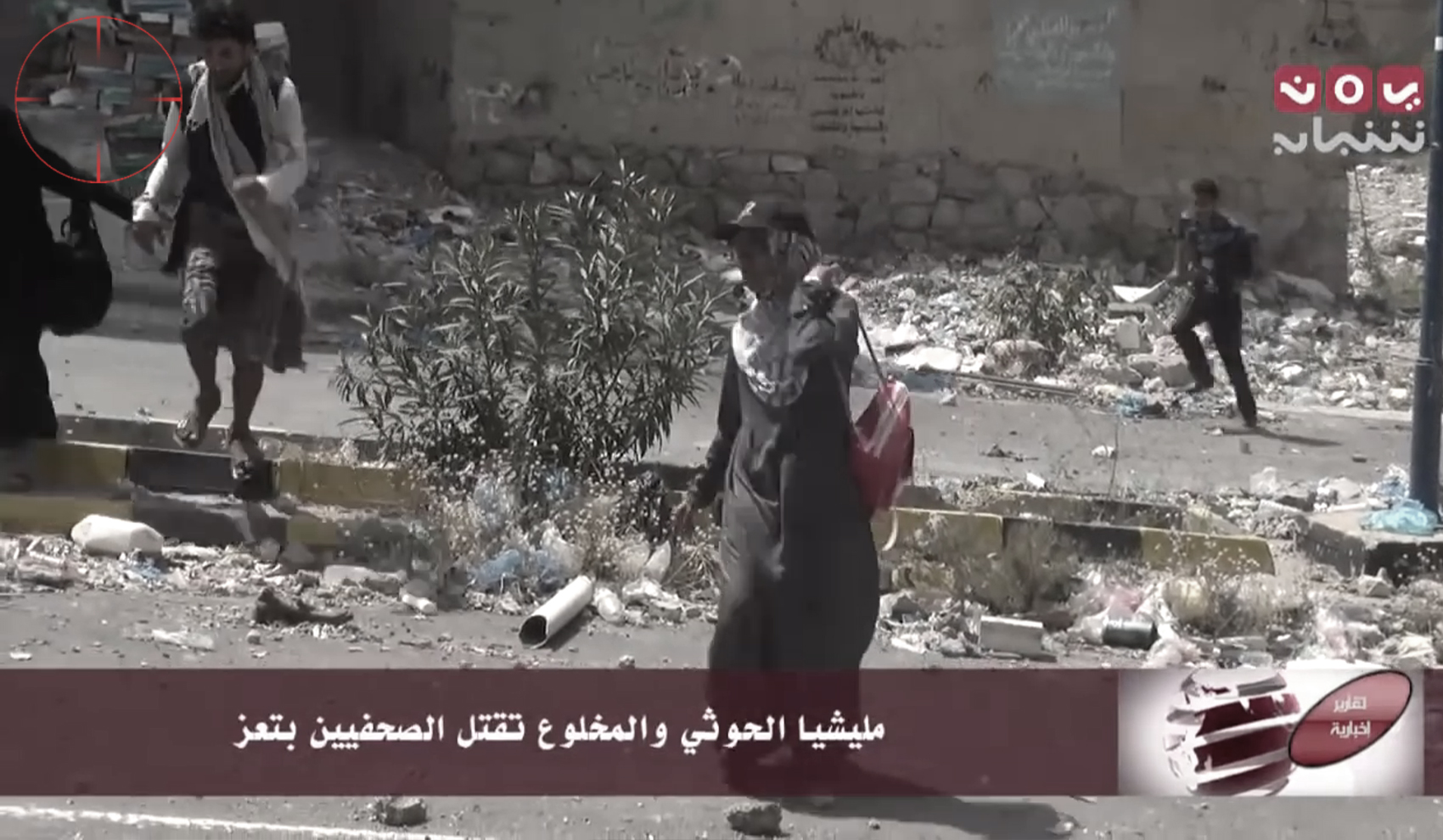 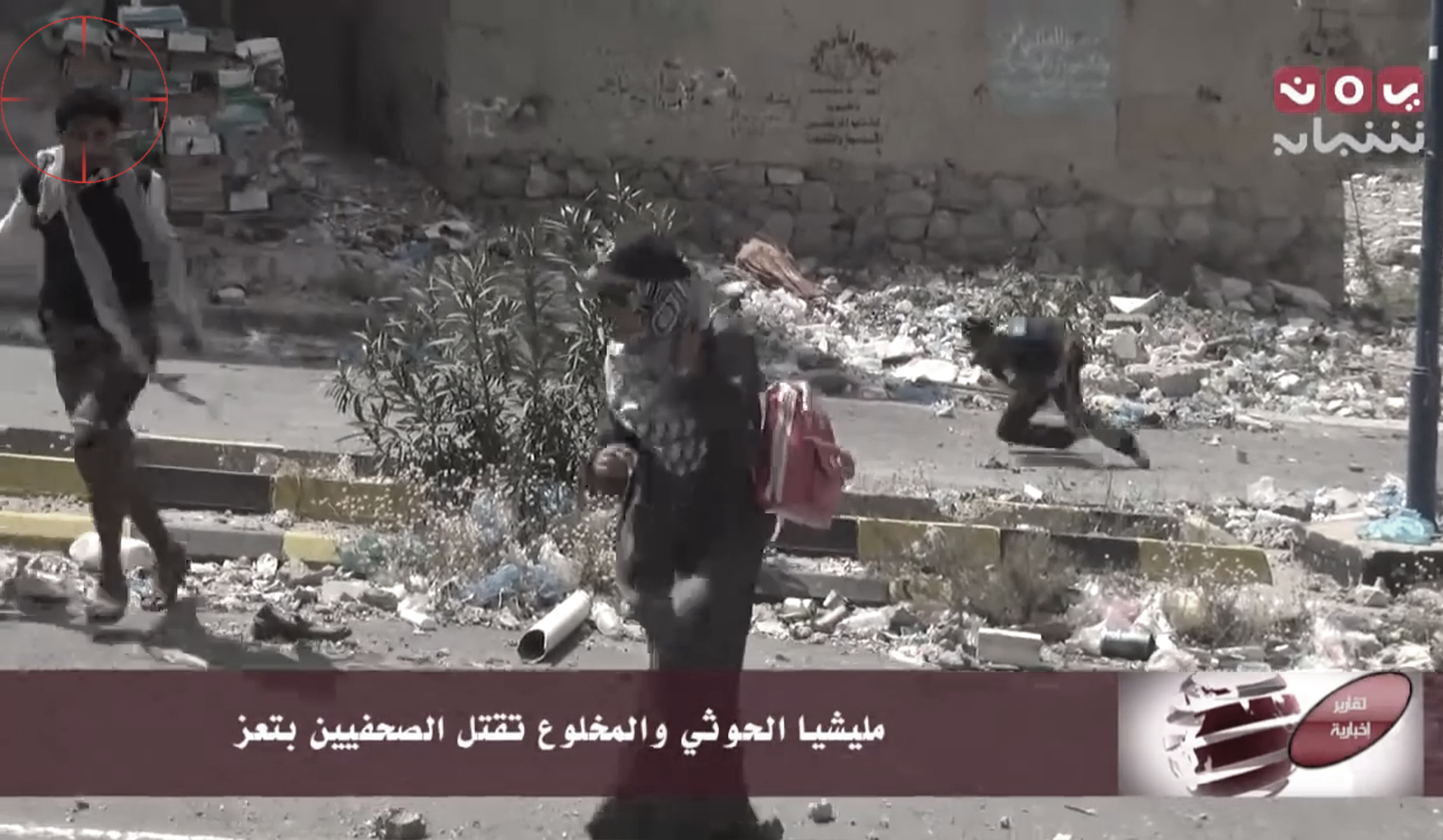 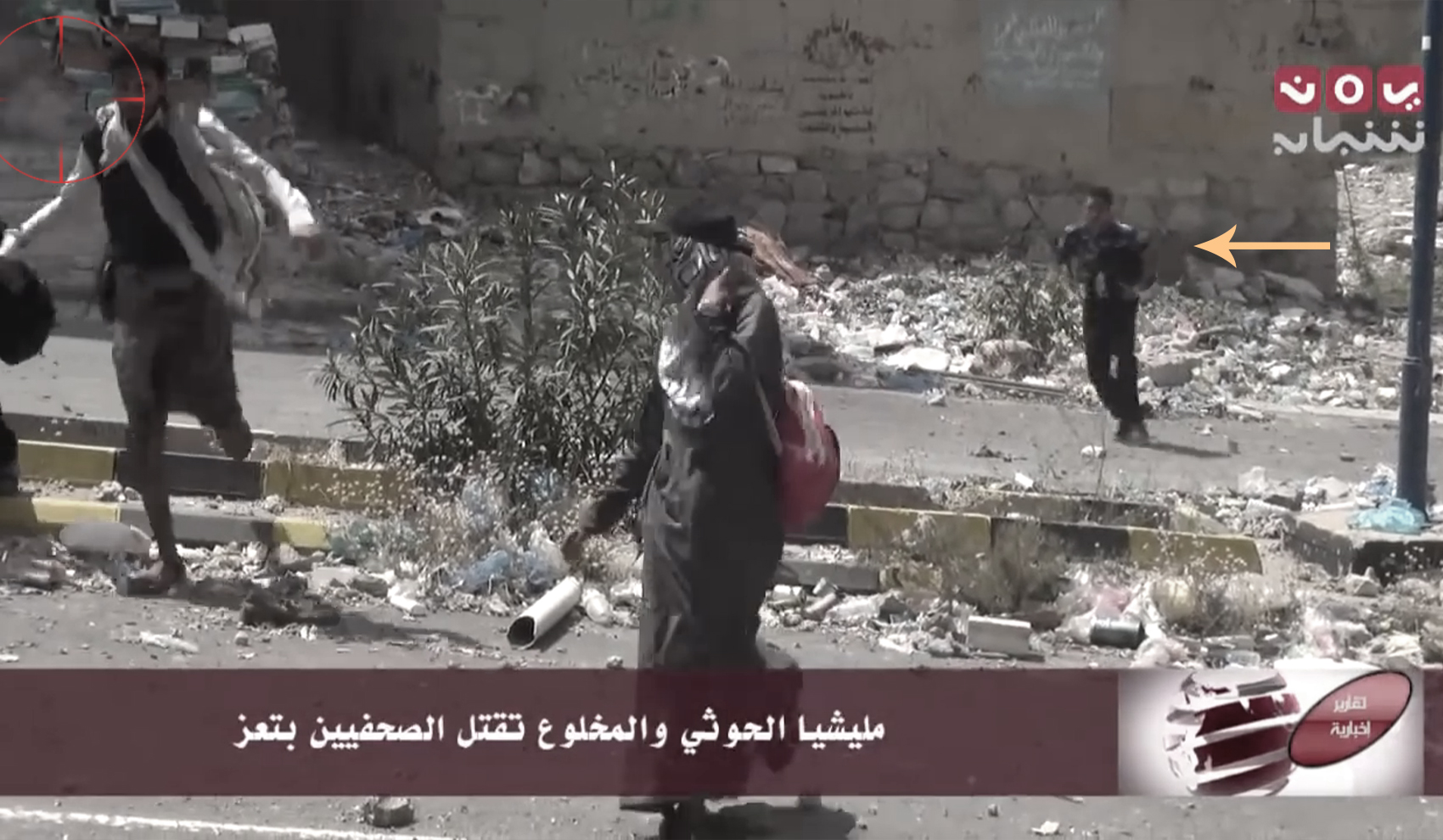 The day after the journalist was targeted, Ahmed Al-Bakari, a journalist who was present at the time when AlShaibani was hit, posted on Facebook a photo showing a small hill behind the buildings. He said in the post that it was the hell on which the sniper was stationed. The Yemeni Archive analysed the visual content and the trajectory of the bullets to confirm Al-Bakari’s claim. 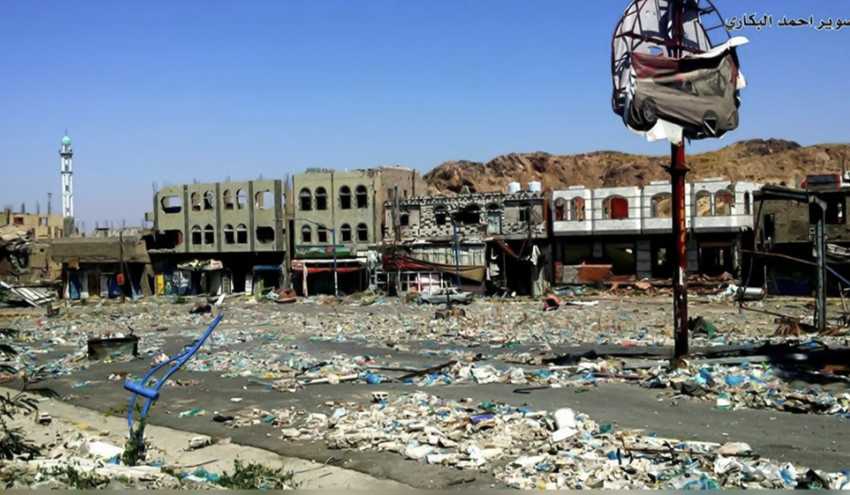 A photo posted by Ahmed Al-Bakari on Facebook, a day after targeting AlShaibani

The journalists and the gunman who appeared in/documented the videos of Yemen Shabab and Wael Al-Absi, next to the road overlooked by the sniper, were not exposed to any shots, while the armed individual was subjected to a sniper shot after running to the opposite side. This can be explained by billboards that obscured the sniper’s view of that space. 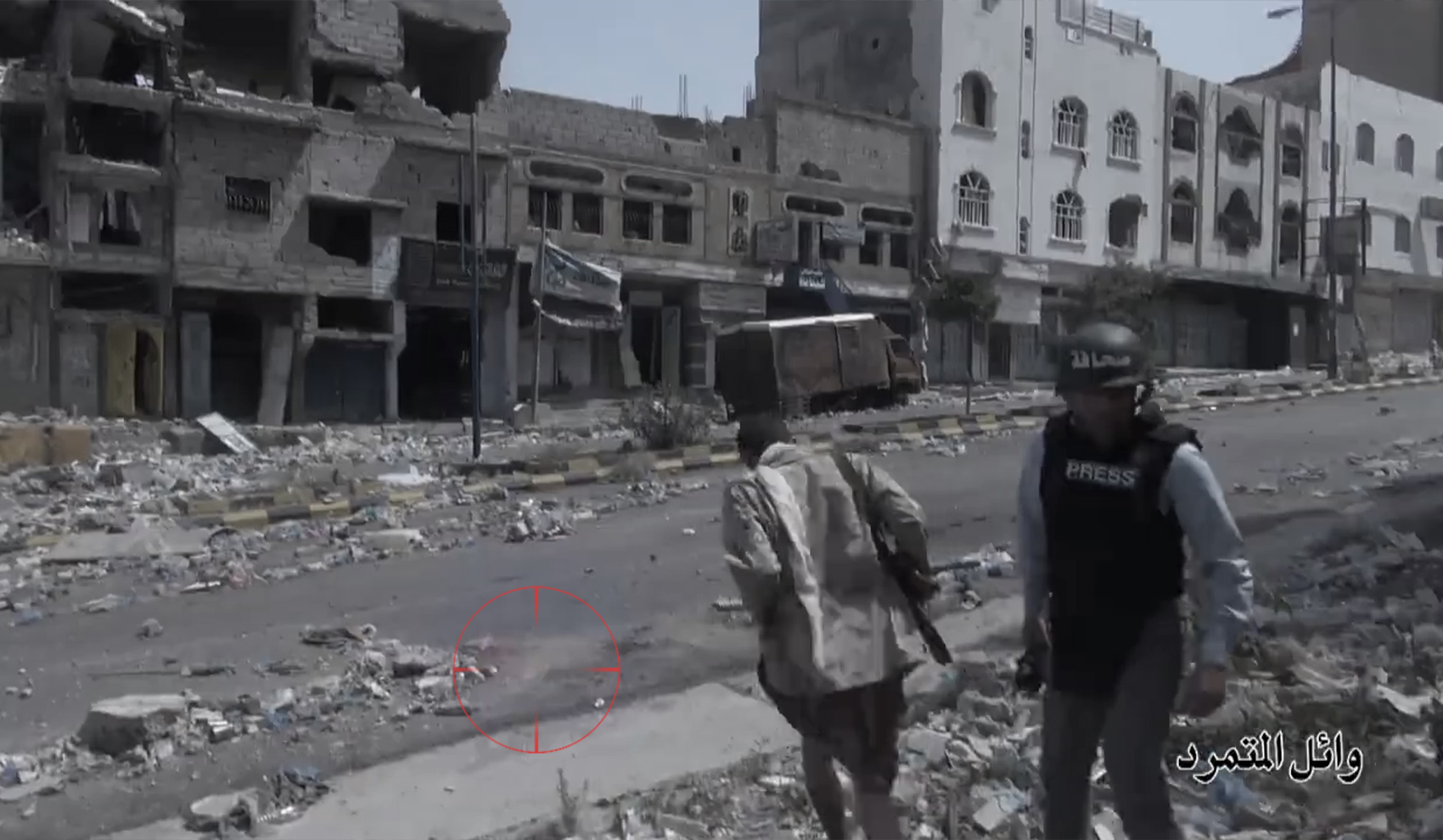 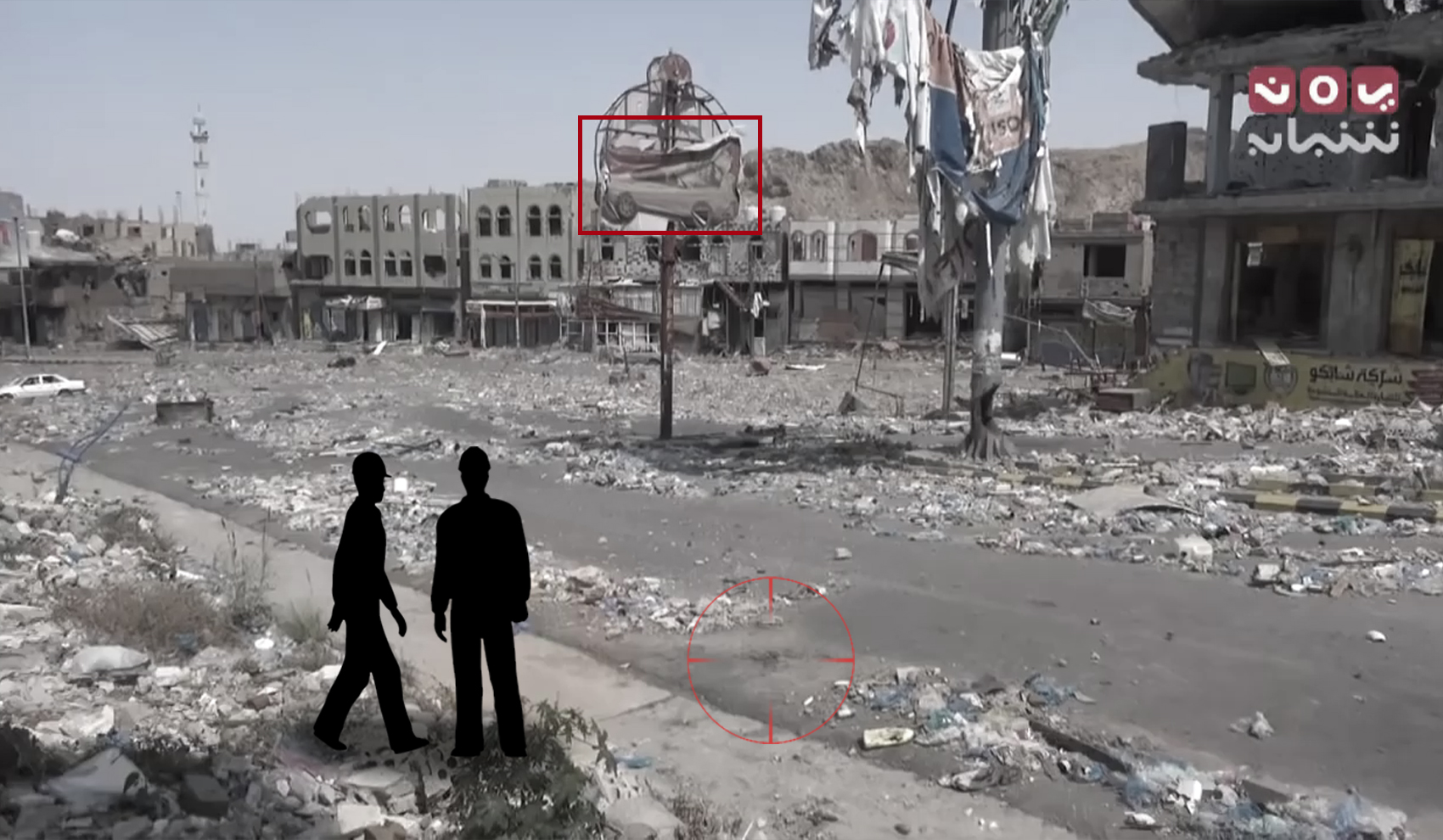 Screenshots from the videos by Yemen Shabab and Wael Al-Absi

The video by Yemen Shabab shows the moment AlShaibani was hit, as well as pulling his body. The sniper did not see the journalist with the red bag in her when she ran AlShaibani. The paramedics a little further on the same road while pulling the body of the photographer. By drawing the trajectory of the gunshots that appeared in the videos on satellite images, we notice that the billboards and the building separating the two roads reduced the sniper’s visibility. 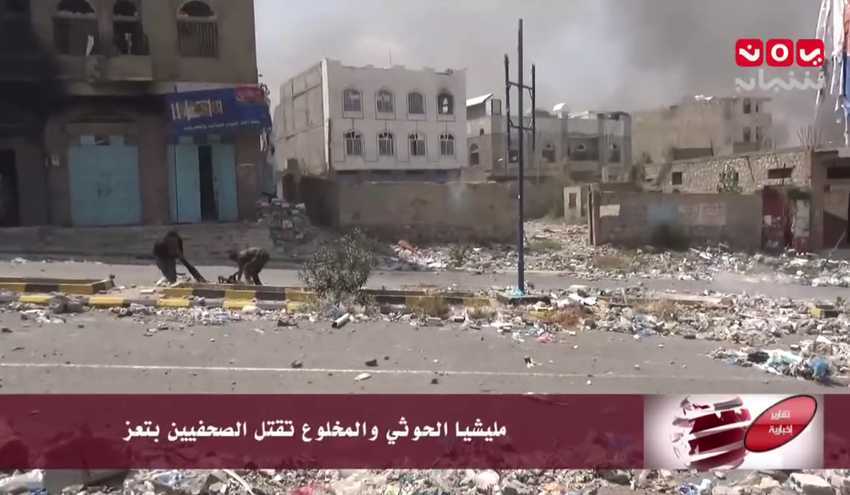 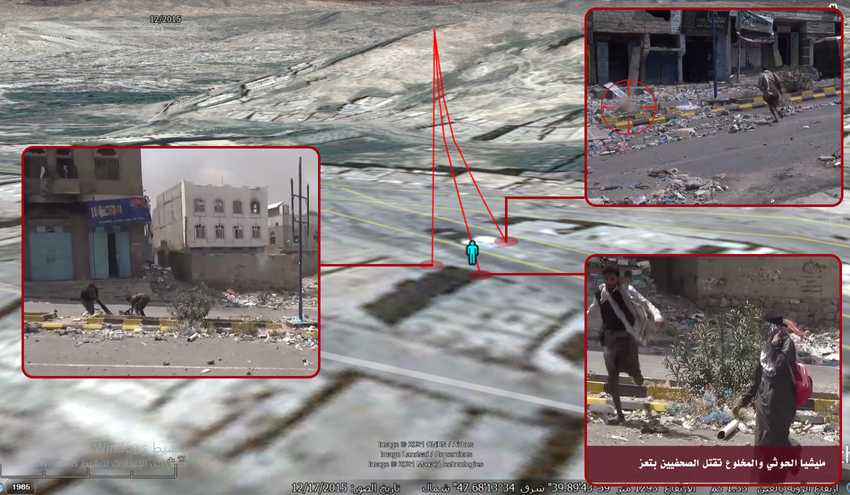 Screenshots from Yemen Shabab and Wael Al-Absi videos, and a satellite image 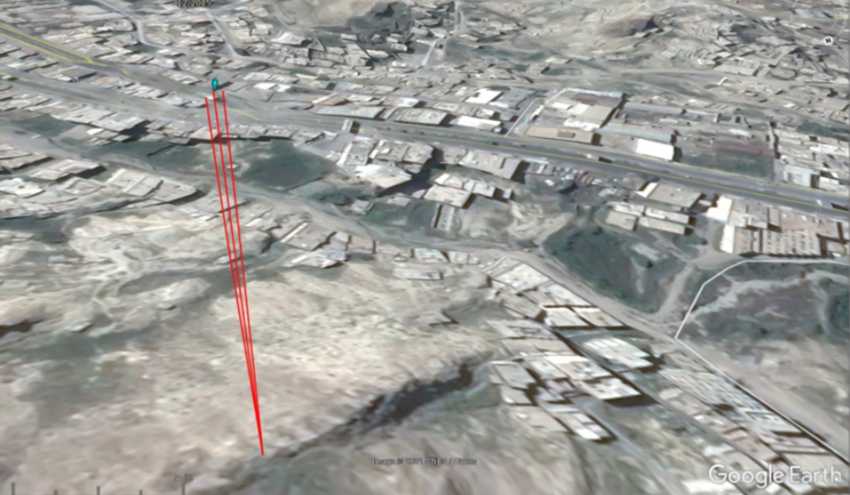 By analysing the Sky News Arabia video that was taken two days before the journalist was killed, we find that the green buildings blocked the sniper from seeing the location of the TV reporter during the preparation of the report, which means that there was no sniper in those buildings, and the likelihood of his presence in a small corner of the hill matches Ahmed Al-Bakari claim in his Facebook post. 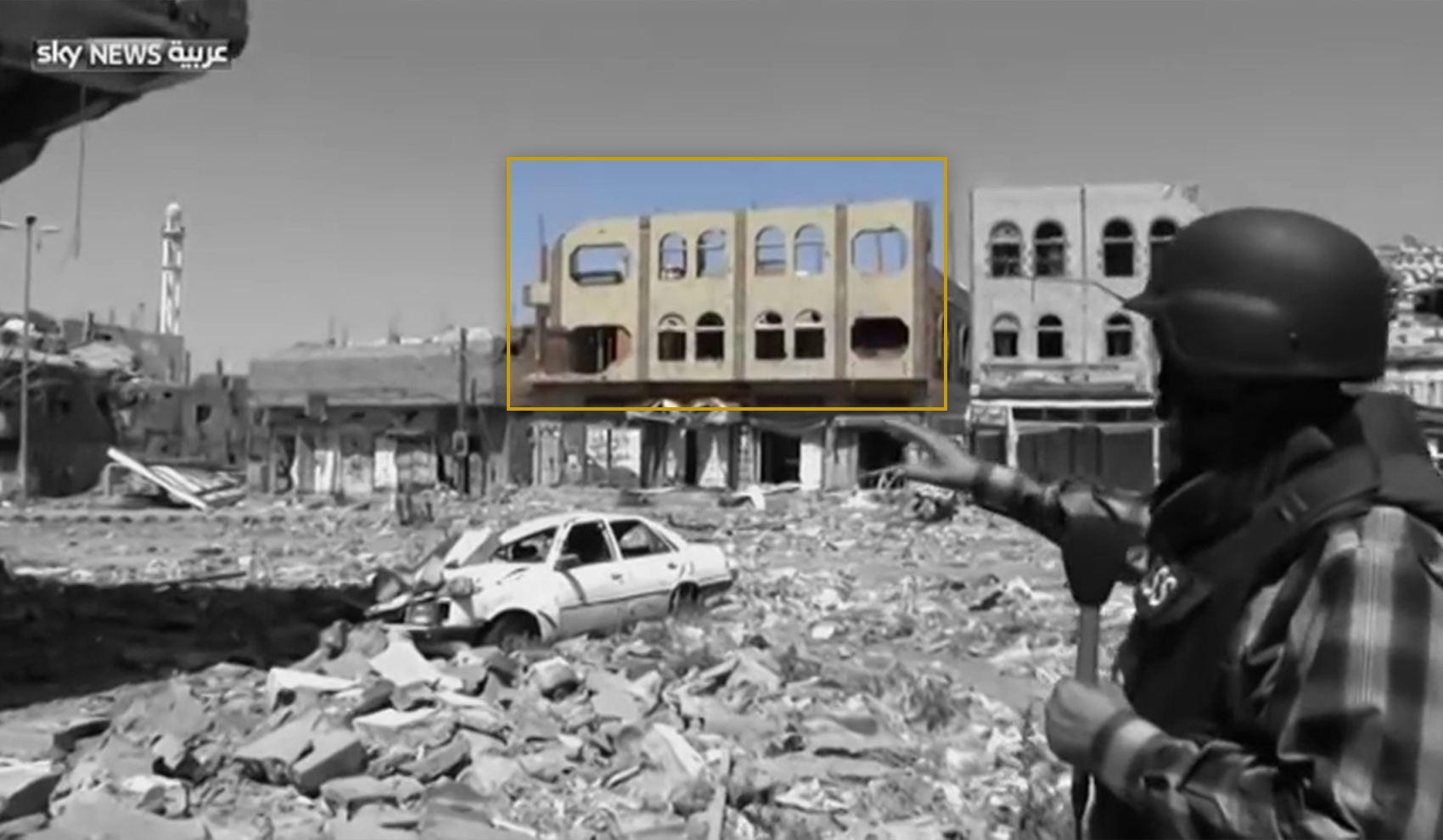 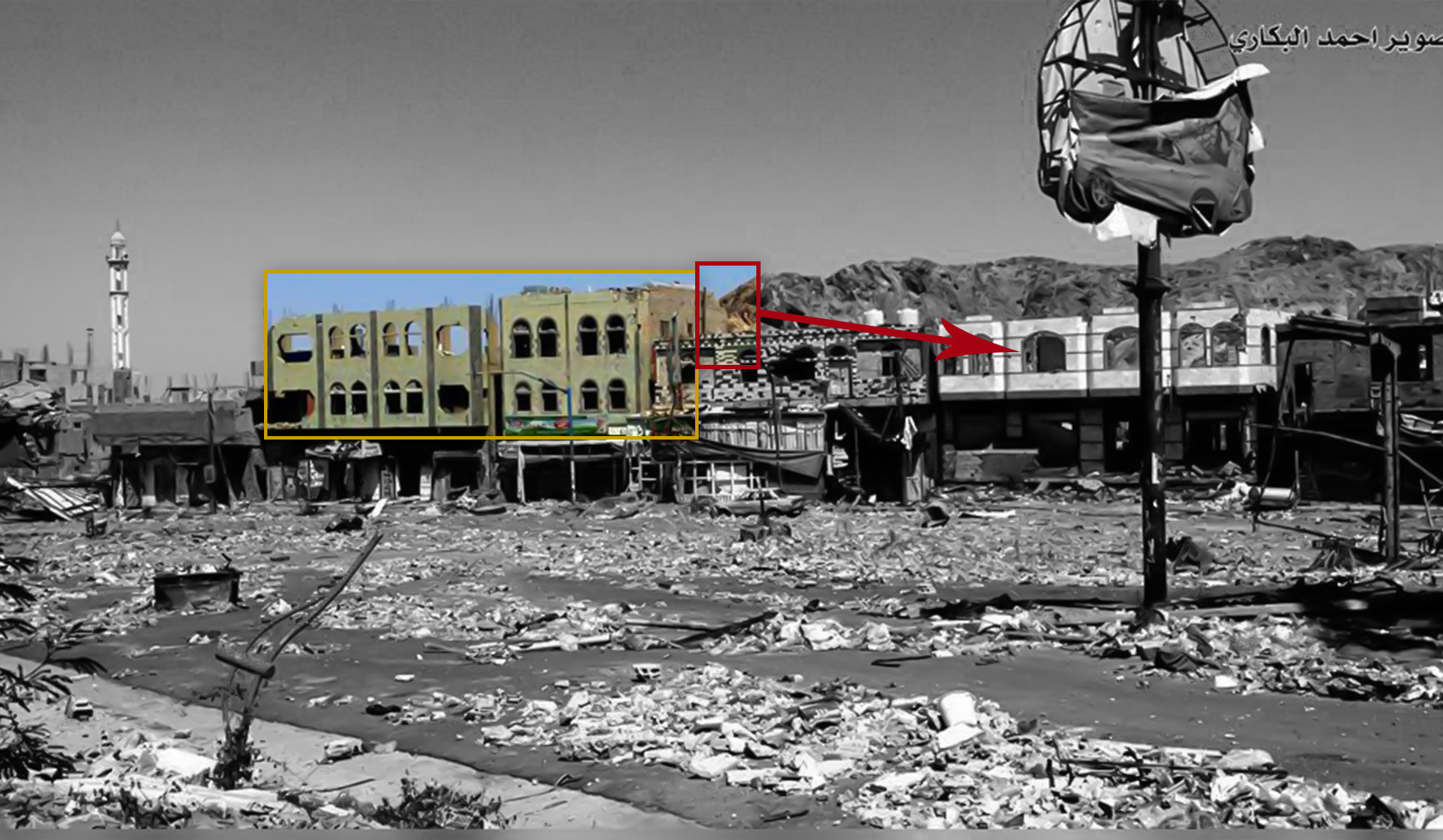 In the report, the correspondent of the Sky News Arabic channel, Sky News, explains the military situation in the Alhsb area, saying: The mosque shown in the picture represents a line of engagement between the resistance forces and the Houthi-Saleh forces at the time, and their forces are also stationed behind the green buildings. Which suggests that they are responsible for the attack based on the results of the previous analysis. 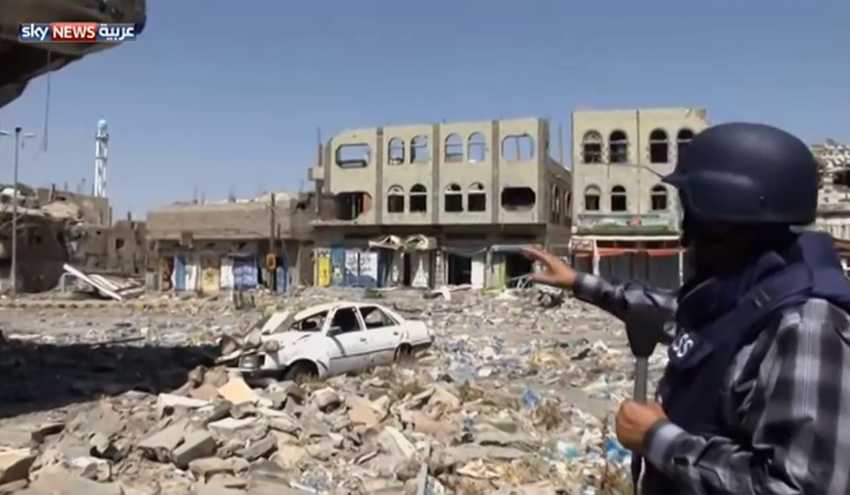 Photojournalist Ahmed AlShaibani who works for the state Yemen TV. He is one of the first journalists to have been killed in Taiz city since the outbreak of military confrontations in March 2015, according to Reporters Without Borders.

The Yemeni Archive concluded that the photojournalist Ahmed AlShaibani was attacked by a sniper and shot dead in the head. The sniper is likely to be affiliated with Ansar Allah-Saleh forces. AlShaibani was killed while coming back from a mission to document the fire that broke out in a factory on 16 February 2016, in Alhsb neighbourhood in Taiz city centre.