Attacks on Al-Siyani Bridge in the Ibb governorate

Airstrikes on Al-Sayani Bridge in Ibb

About the incident: Attacks on AlSiyani Bridge in the Ibb governorate

Incidents identified by Yemeni Archive from open-source information collected in our “Attacks on Access by the Saudi-led coalition in Yemen” database reveal that the Al-Siyani Bridge, located in the Al-Siyani District Center in the Ibb Governorate in central Yemen along the road linking the Sana’a and Taiz governorates, was attacked by a number of airstrikes in the early morning (between 02:40 - 02:57 local time) on March 21, 2016. This attack led to the destruction of about 12 meters of the 50 meters long bridge cutting off the road for civilians. There were no official confirmations of any civilian casualties from the attack.

Yemeni Archive gathered open source information from 20 sources available on the Internet that published news related to the attack. Yemeni Archive, verified, analysed and confirmed this information in addition to saving and archiving it through the (check) tool.The team also confirmed the location of the attack by comparing satellite images with the visual evidence shown in the collected open source content. Yemeni Archive also used the “TimestampConvert” tool to identify the timestamp of social media posts in order to determine and confirm the time of the attack.

The Yemeni Archive database “Attacks on access: systematic targeting of bridges in Yemen” is a comprehensive database that shows the attacks on bridges connecting areas along major roads in Houthi-controlled territory since March 2015, when the Saudi-led coalition launched their military operations in Yemen. This database confirms that the targeting of bridges is used as a military strategy with the aim of cutting off the movement of Houthi forces. It additionally illuminates that these attacks target bridges frequently used by civilians as they connect to roads between cities. Most of the bridges in Yemen are located over flood corridors and large water-filled areas that are difficult for civilians to cross when bridges are destroyed.

In January 2014, the governorates of Taiz and Ibb were merged into one region named the Al-Jund region as unanimously agreed to by the Yemeni parties in the National Dialogue Outputs document. The document divided Yemen into a federal state composed of six regions. The Al-Janad region is one of the largest regions in terms of population density and roads for movement and trade.

The outcomes of the National Dialogue were not implemented following the armed rebellion by the Houthi forces against the “legitimate government” in September 2014 where Houthi forces took control of the capital, Sanaa, the Ibb governorate, and various cities in southern Yemen. The Ibb governorate was considered one of the areas untouched by any direct military confrontations due to its complete submission to the authority of the Houthis. The governorate was considered a strategic point for military forces moving from the north to the fighting in the south. This was specifically relevant the areas of Taiz and Lahj, whose bridges were vulnerable to direct attacks by Saudi-led coalition forces. 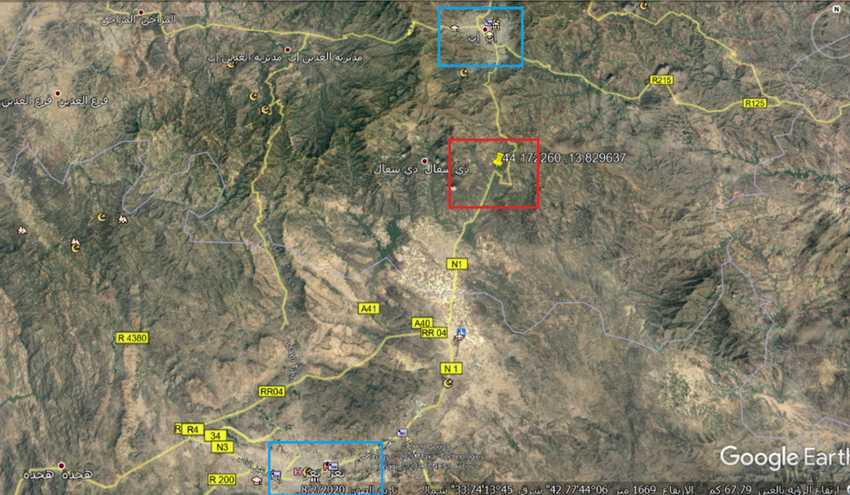 Social media posts, news websites, and TV reports stated that the Al-Siyani Bridge was attacked by airstrikes from the Saudi-led coalition forces on March 21, 2016. The attack reportedly resulted in parts of the bridge collapsing, cutting off the road for vehicles. These reports alleged that the attack took place in the early hours of the morning. By the evening, many photos and videos showing the impact of the attack on the bridge were circulated online.

By following a specific search mechanism, Yemeni Archive was able to find the first posts online alerting of the attack. One of the first alerts was a tweet published by the “Yemen News Gate” account at 02:58 am local time. A minute before that, a resident from the same region called “A.S” also posted on Facebook mentioning the attack on the Al-Siyani Bridge with two missiles. “We didn’t share a picture to the post because it contains racist speech inciting hatred.”

Yemeni archive chose not to share the link to the post as a professional measure to avoid any consequences for sharing this type of violation.

A picture of the first claim by “Yemen News Gate” on Twitter about the incident.

The timestamp of the local source “A.S” post on Facebook about the incident using the timestampconvert tool

About 40 minutes after the previous post, as identified using the TimestampConvert tool, “A.S” posted a picture on his personal Facebook account showing a crater on an asphalt road, which he claims is on the targeted bridge. This same image was also shared on the “Mandab-press“ news site.

In a TV report published by Al Masirah TV about the incident, a resident appears at minute 0:48 of the video report stating that the attack took place at 2:42 after midnight. Taking his testimony into consideration and comparing it with the timestamps of A.S’s Facebook posts as well as the tweet from the “Yemen Press” account on Twitter, Yemeni Archive was able to confirm that the attack occurred between 02:40 and 02:57 AM local time.

Several news sites and networks circulated photos and videos of the attack on Al-Siyani Bridge in the Ibb Governorate. The Yemeni News Agency ”Saba” published news that the bridge was bombed with four airstrikes, resulting in its destruction. By the evening of the day of the attack, other news sites, including ”Taiz News” and ”Yemen Press”, circulated pictures and videos of the destroyed bridge. A number of local channels additionally published video reports on the attack (Yemen Satellite TV, Yemen Today, Al Masirah, and Saba Satellite TV).

A picture from The Yemeni News Agency “Saba” about the incident.

The damage to the structure of the bridge after the bombing can be confirmed using four videos posted by different sources and filmed from two different angles. You can see the similarity of the bridge details and the direction of the collapse. You can also see that there is no visible protrusion in the side structure of bridge in the footage of Al-Masirah TV and Al-Yaman Today TV Channel, while the other direction shows a projection at the top of the block in a video posted on Facebook and in a photo published by Yemen Press. 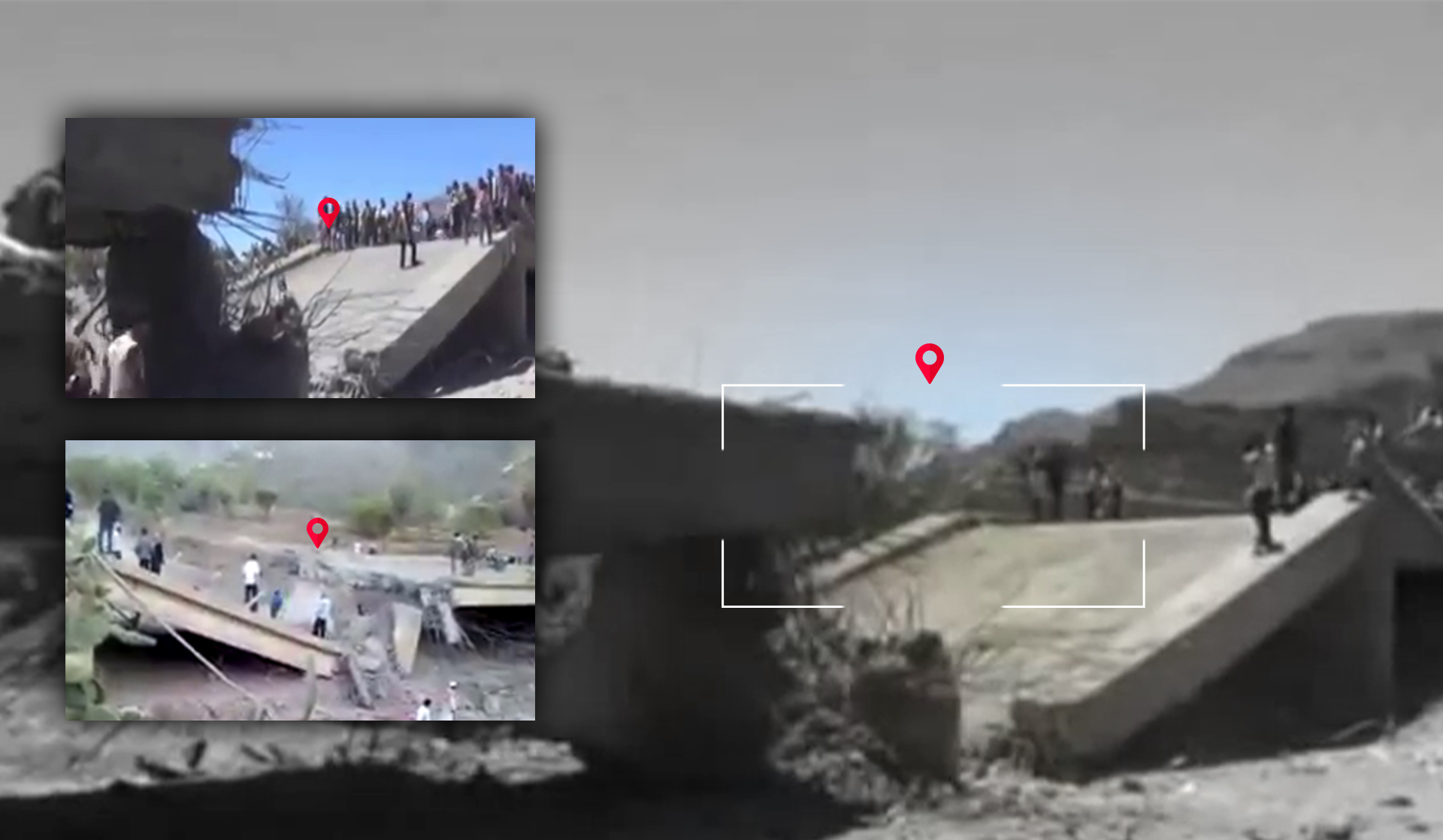 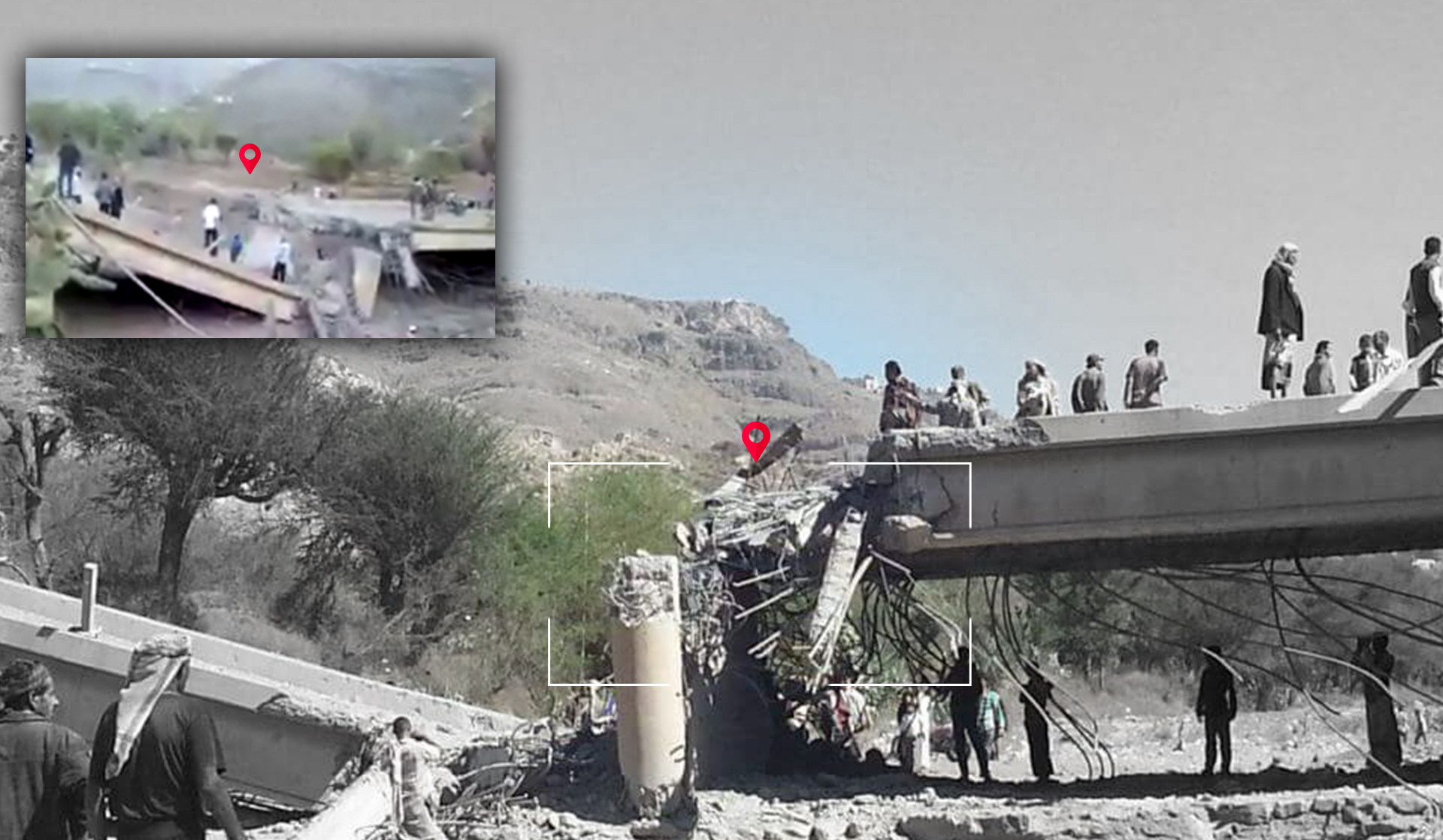 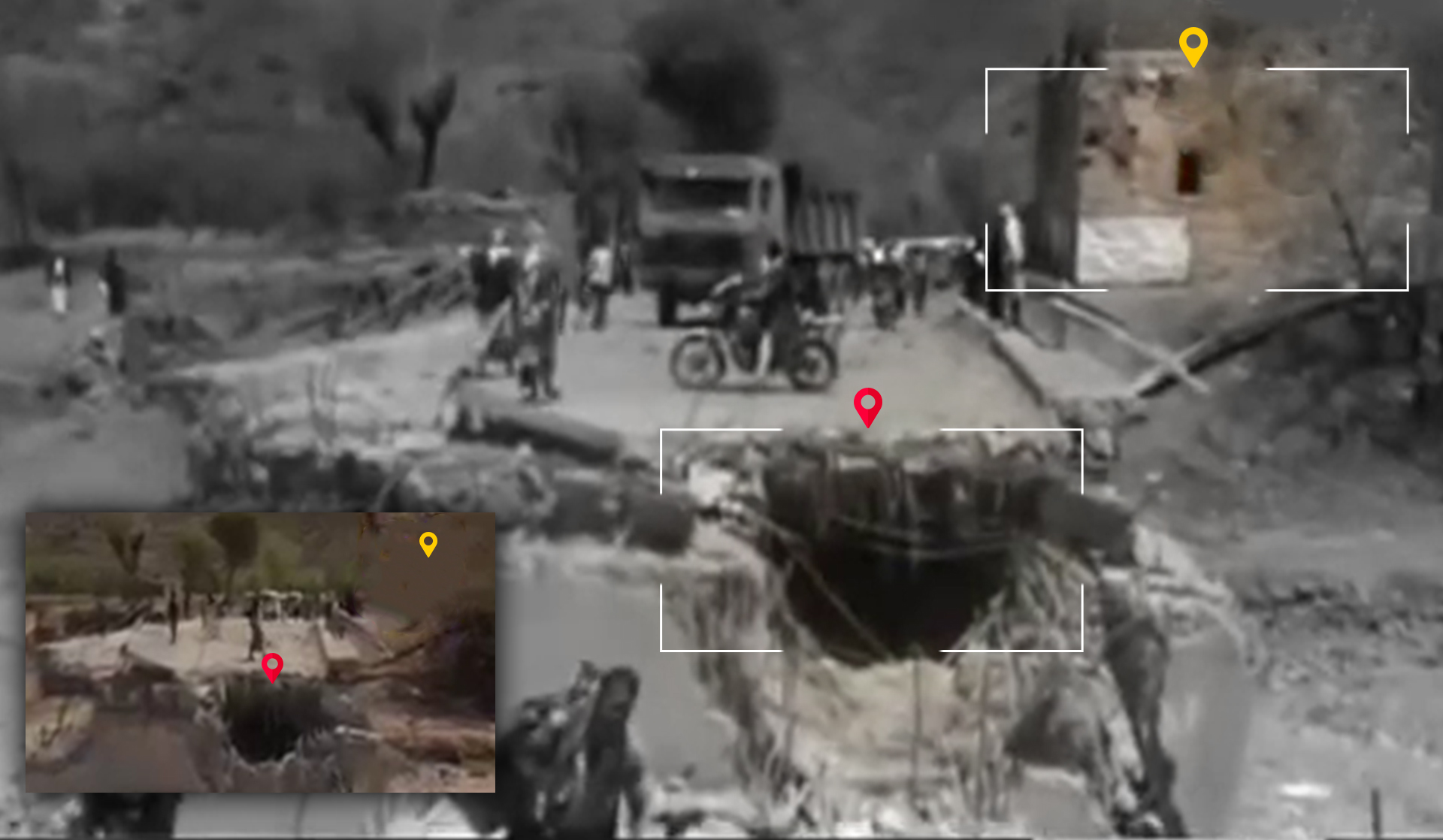 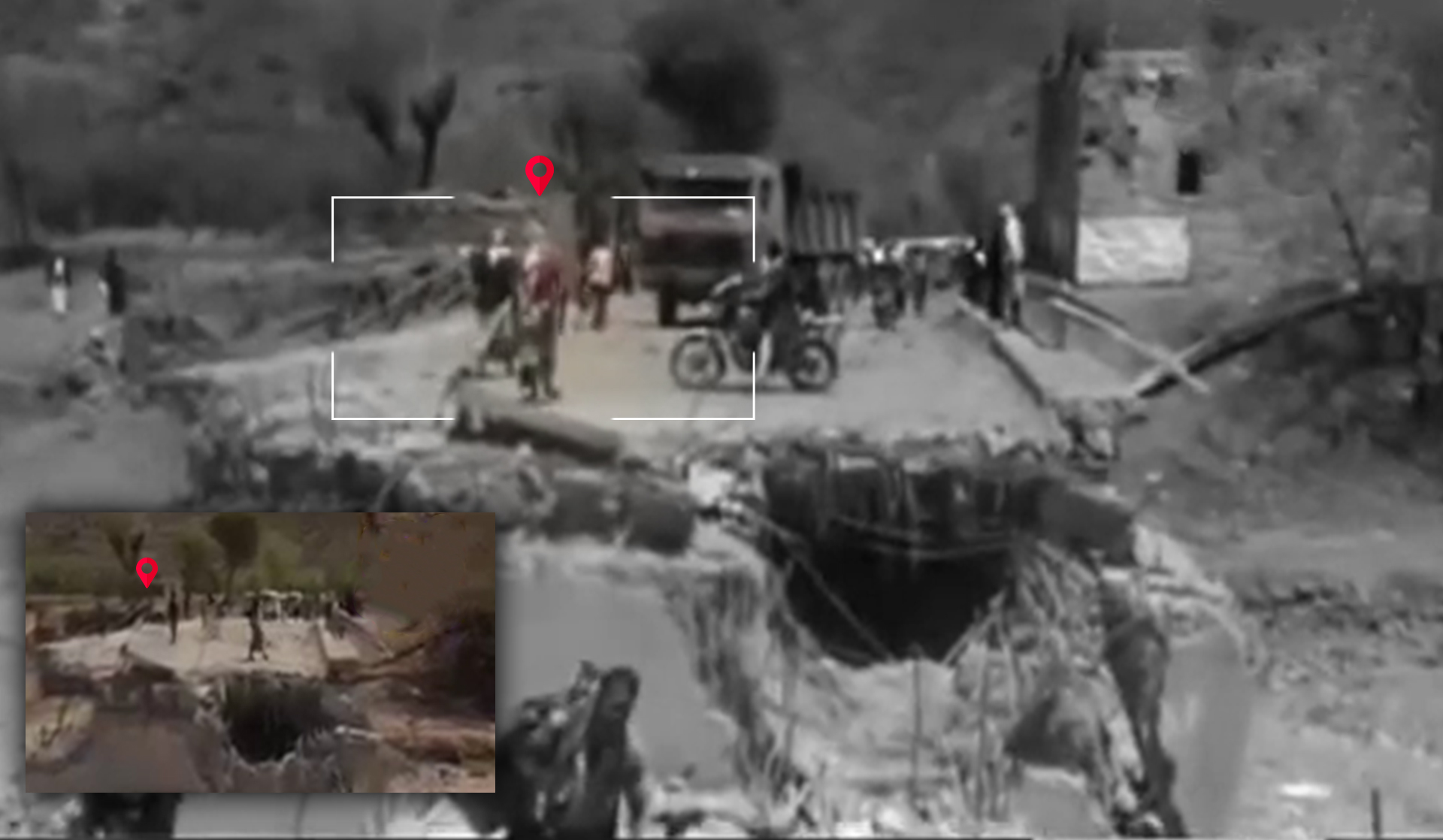 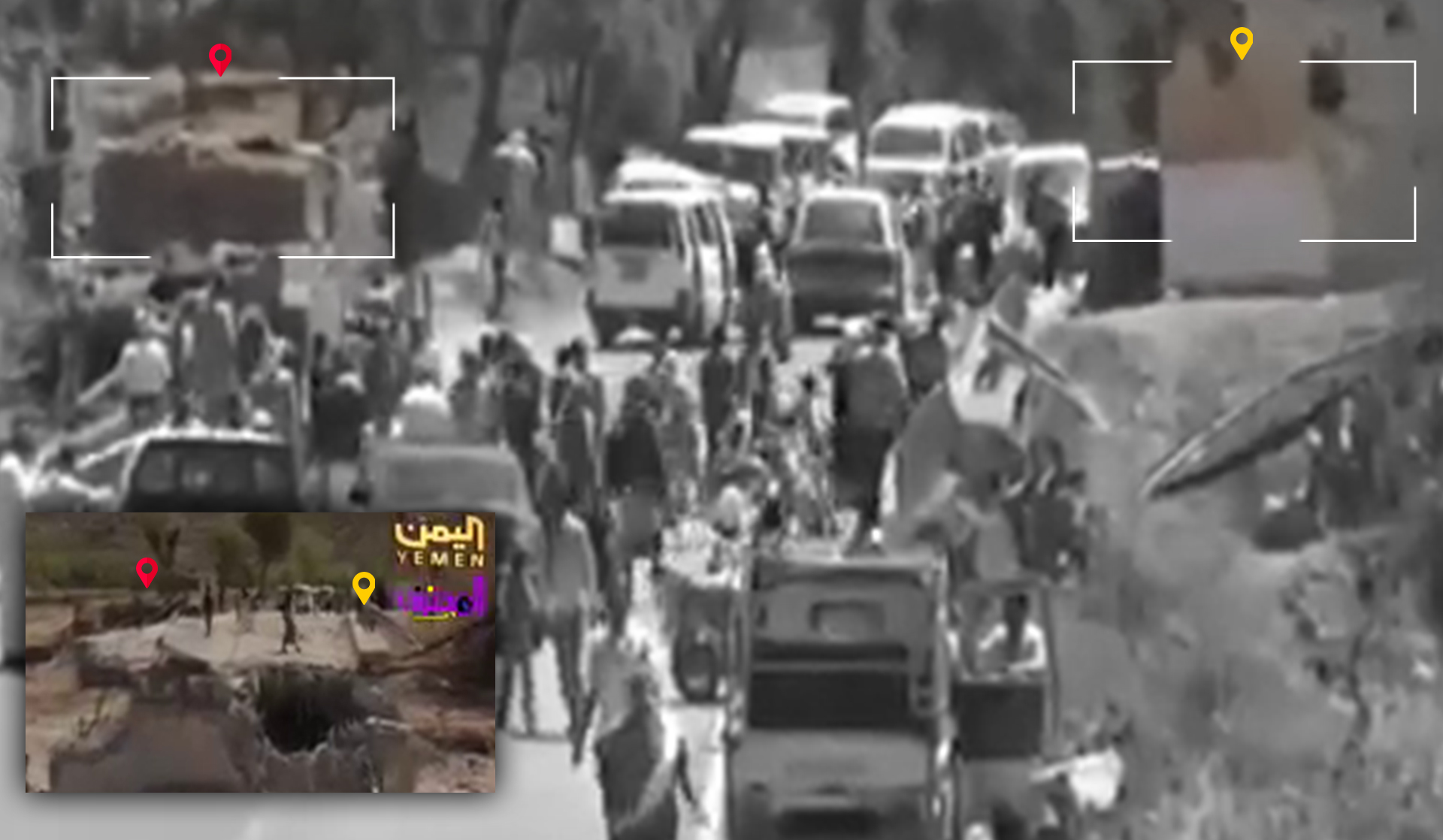 Distinct landmarks appear on the western side of the bridge in a photo posted on the “Ib News” website during the reconstruction of the bridge a month after the attack. In the photo, a country house can be seen in the background with behind it a building that appears to be an L shaped school. 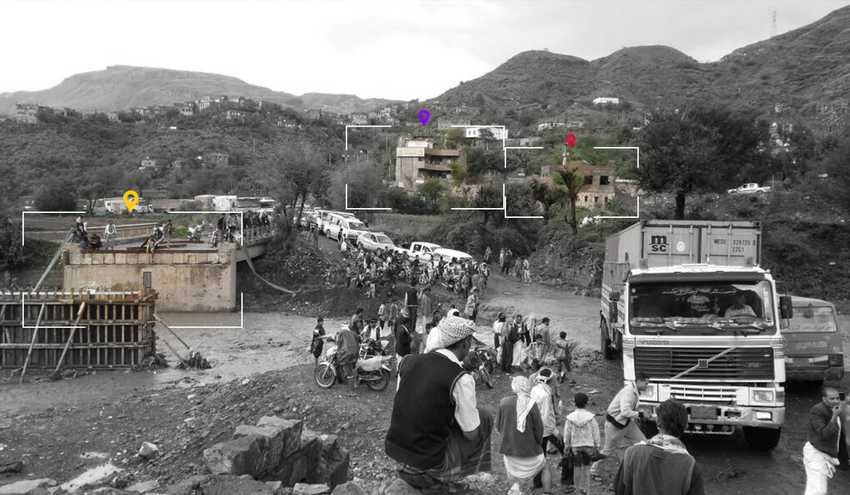 A picture from “Ib news”

After analyzing visual information and geographic landmarks (the houses and the school) and matching them with satellite imagery from Google Earth, Yemeni Archive was able to geolocate the images and videos posted online showing the aftermath of the attack. . 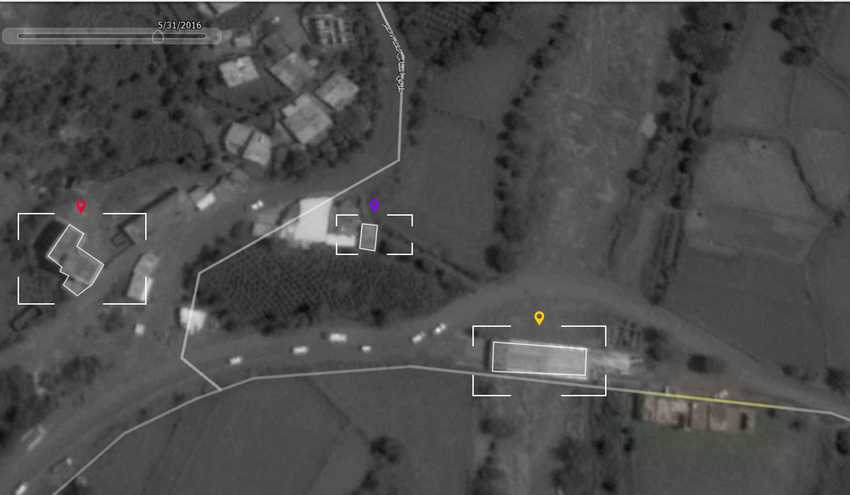 Additionally after matching geographic landmarks of the mountains surrounding the bridge from three directions (east, west and south), which can be seen in the video report from Yemen Today TV and the images from the Ibb News and Taiz News, with satellite imagery from Google Earth taken from terrain view, Yemeni Archive determined the location of the attack to be at the coordinates 13.829637 , 44.172260. 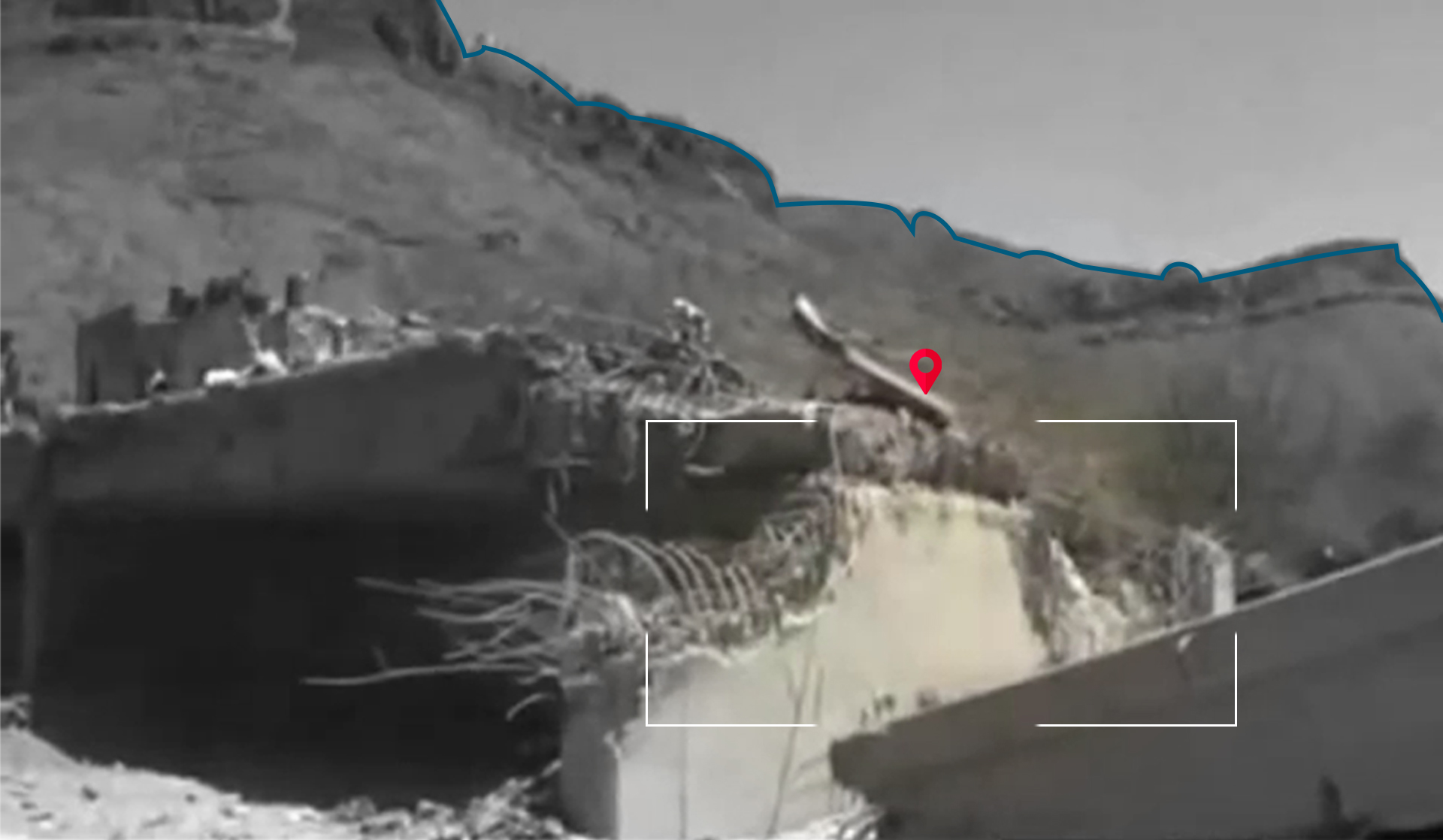 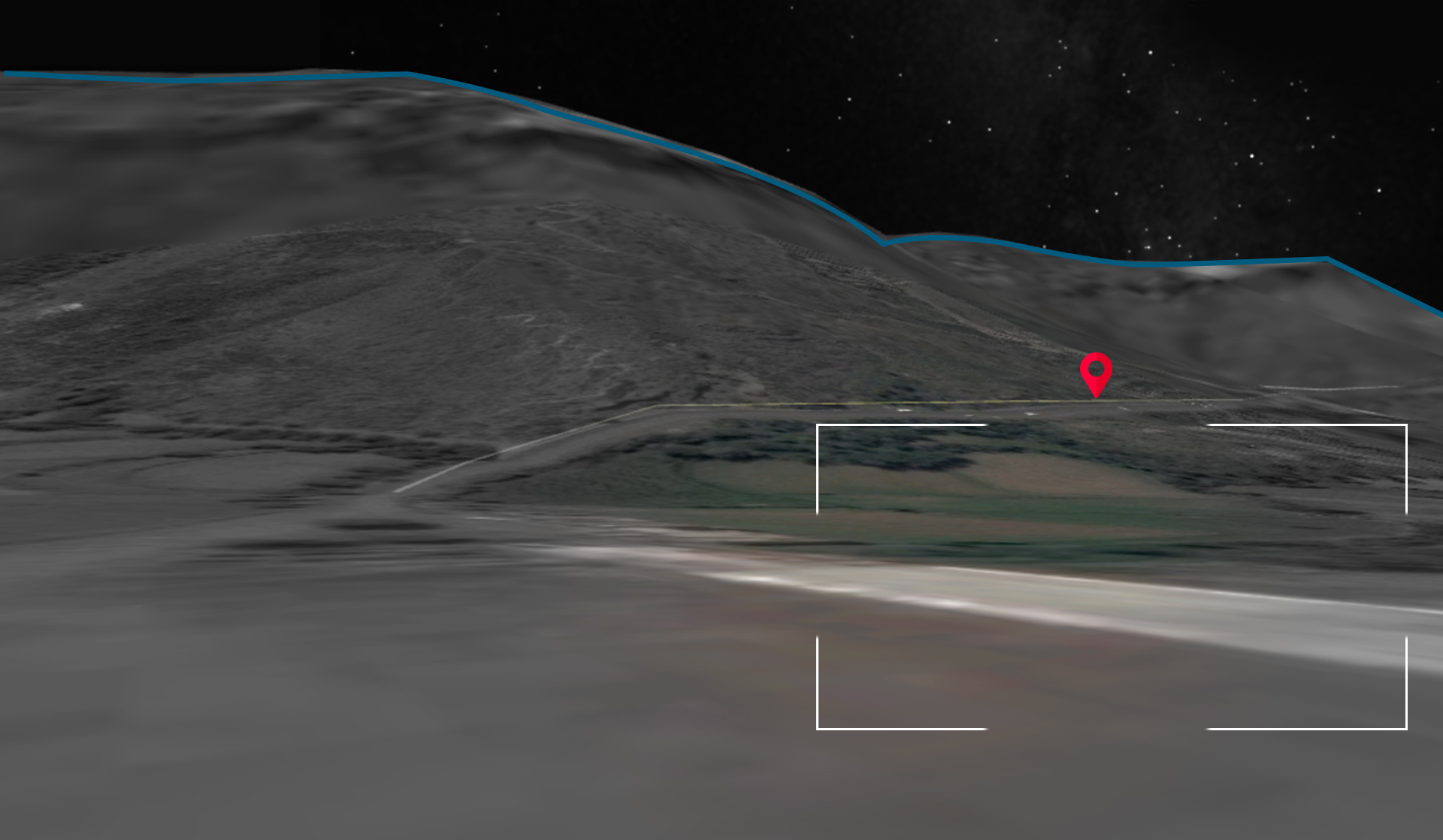 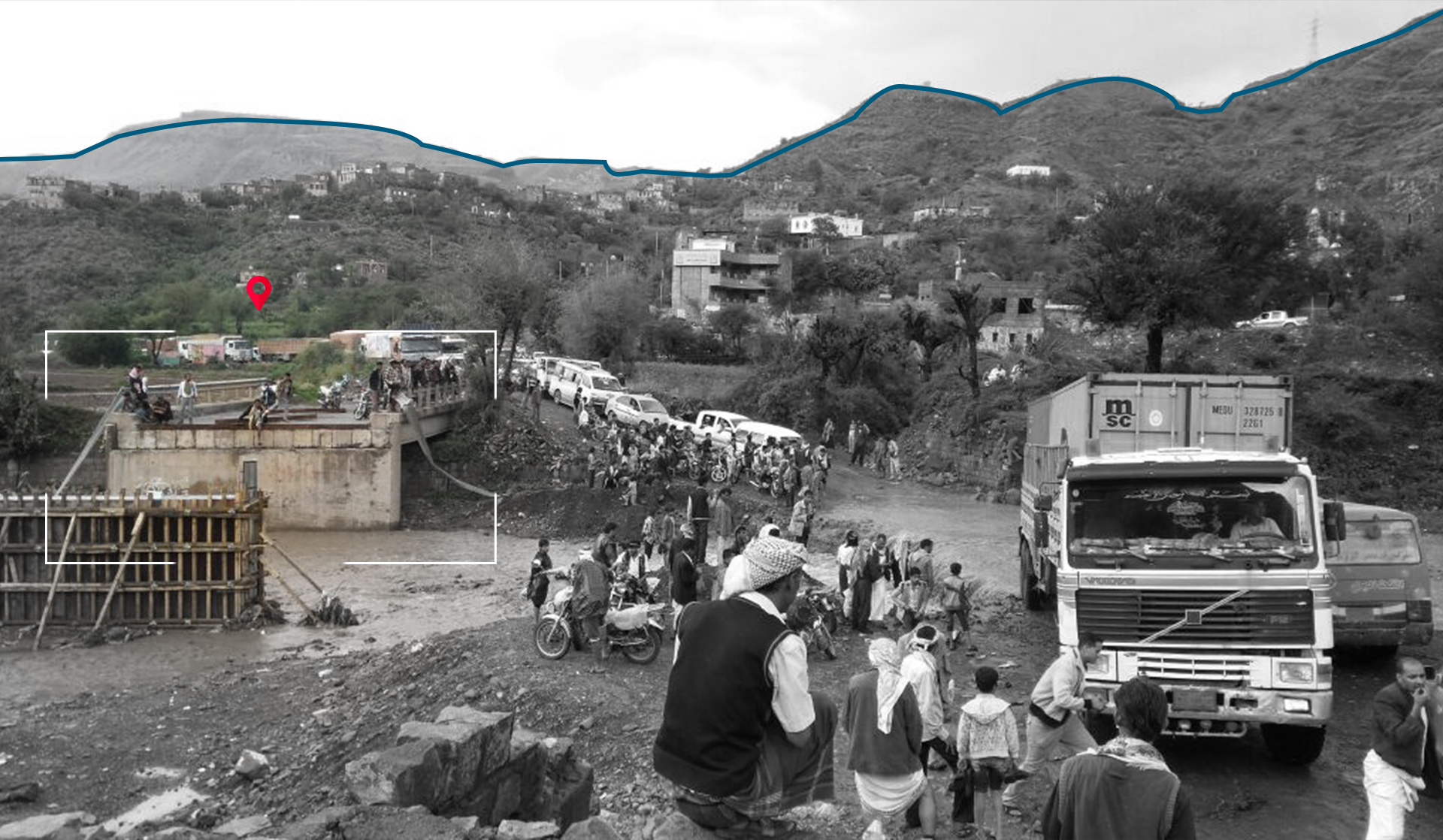 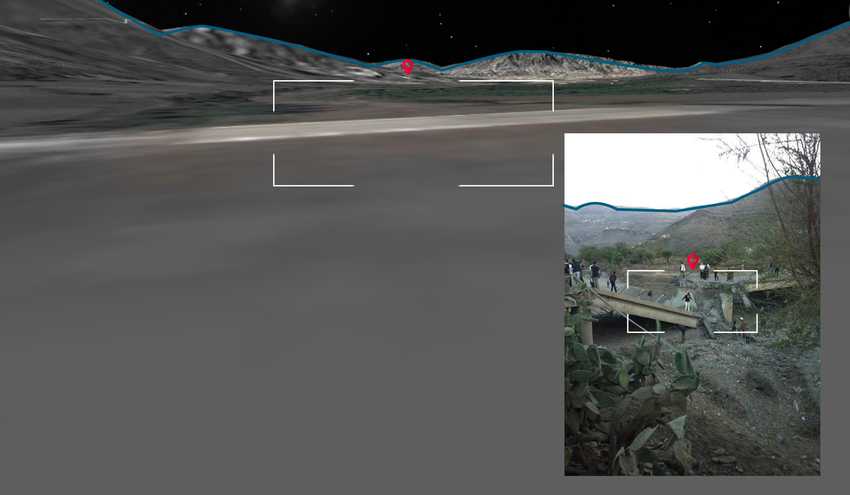 A screenshot from the “Taiz news tv” report showing the southern hills and images from the satellite imagery from the ground level via Google Earth simulating the angle the video was taken from.

Although it was not possible to obtain an accurate official study of the damage, an analysis of the visual evidence in the open source content shows that 12 meters of the 50 meters long bridge was destroyed by the attack. This measurement was approximated by comparing visuals from a video posted on Facebook with satellite imagery from Google Earth., 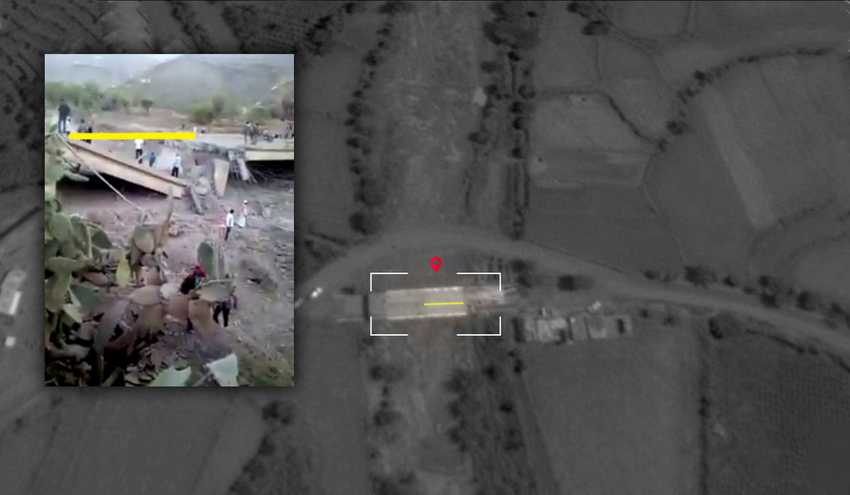 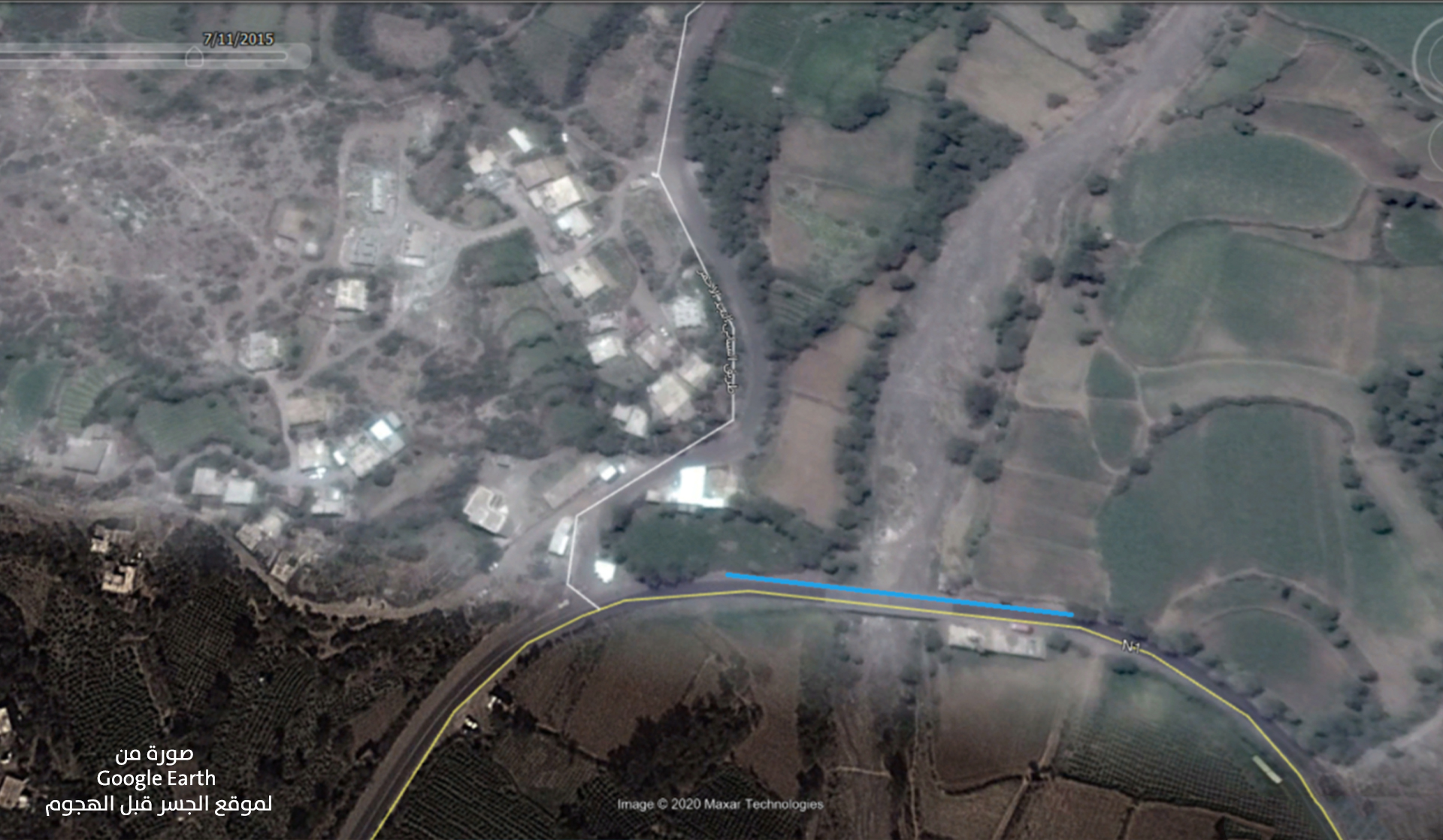 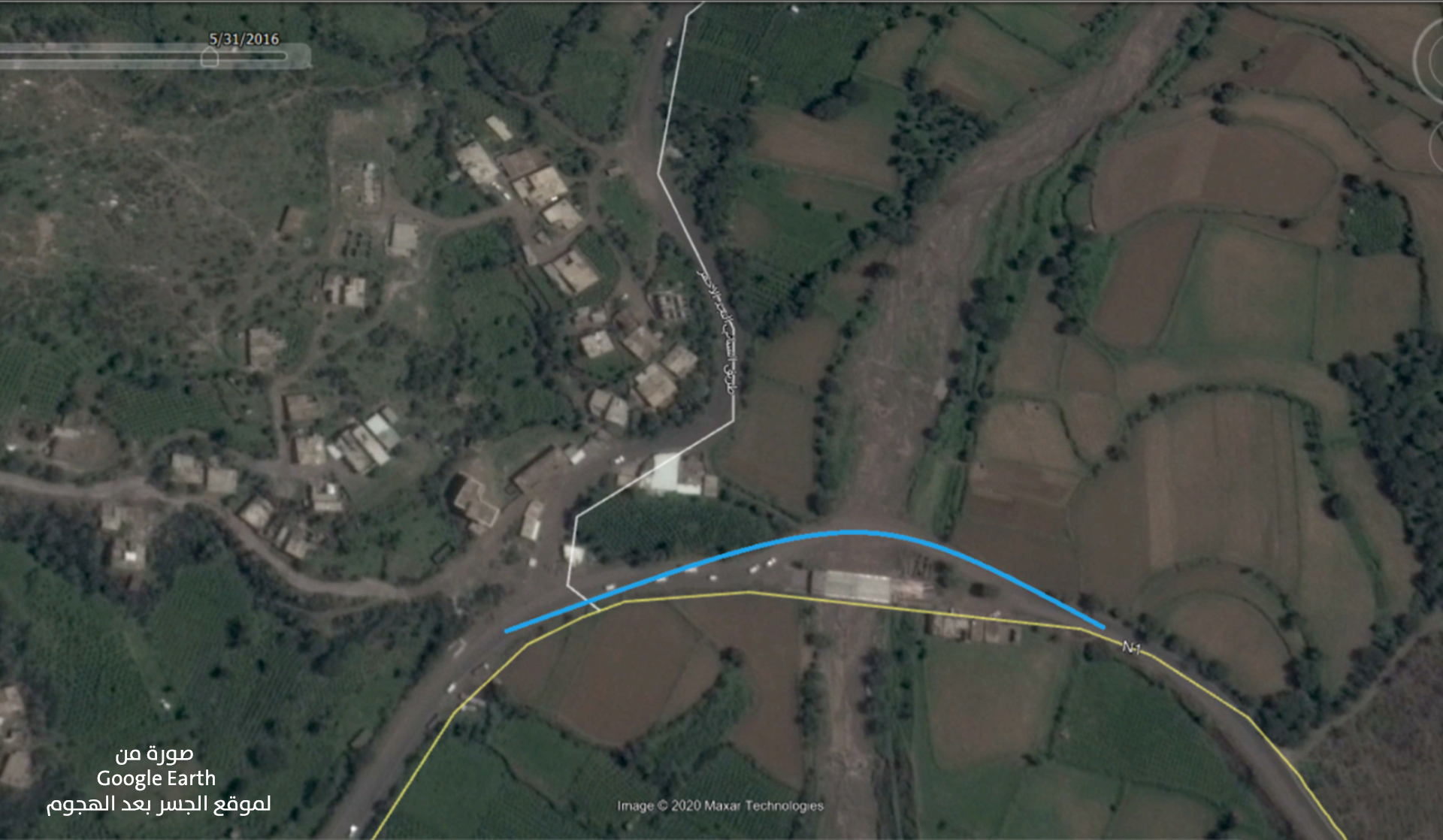 A picture from satellite imagery from Google Earth of the bridge’s location before and after the attack.

The destruction of the bridge and the absence of alternative roads forced vehicles in the area to use roads that passed through the valley and subsequently often flooded. Because of the bridge’s important location on the main road between the governorates of Sanaa and Taiz, the bridge was reconstructed by the local authorities in the Ibb governorate in May 2016, less than two months after the attack. According to local reports, the cost of repairing four bridges in the Ibb governorate, namely the Al-Siyani, Al-Dalil, and Al-Sadda Bridges, in addition to the Al-Jaadi transport crossing, reached $5,500,000 US dollars.

A picture from the “The Yemeni Media Center” news site

Yemeni Archive was unable to find visual content showing the remnants of the munition used in the attack for analysis.. However, by analyzing the information and images collected by the Yemeni Archive , the team reached a conclusion about the type of attack.

In the picture taken at night and published by “A.S” - a resident from the region - on his personal Facebook account (later shared by “Mandeb Press” news site), the bridge appears still standing despite it having been targeted once as indicated by the crater shown in the image. While another picture published by “Taiz News” shows two craters at both the ends of the bridge causing one part of the bridge to collapse This suggests that the bridge was hit more than once with extreme accuracy possibly indicating that the attack was carried out by airstrikes. The Saudi-led coalition forces are most likely responsible for the air attack. 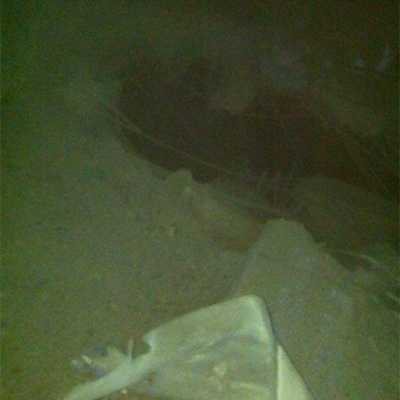 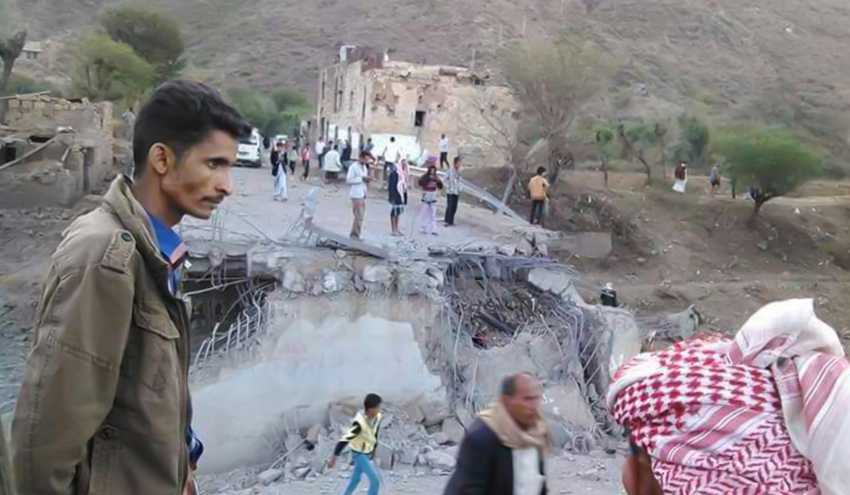 ”Saba” News Agency and the TV report by “Yemen Today” on YouTube claim that two civilians were seriously injured in the airstrikes that targeted Al-Siyani Bridge.

A picture was published on ”Saba” News Agency

A screenshot from the “Yemen Today” TV report, which mentioned the number of injured by the attack.