Children killed and injured in shelling in Taiz

Children killed and injured in shelling in Taiz

On the evening of 23 July 2022, ten days before the end of the second United Nations truce, Al-Rawda neighborhood, north of Taiz city was shelled by artillery that hit a group of children, resulting in deaths and injuries.

Al-Rawda neighborhood is in Al-Qahirah District, north of Taiz city, less than one kilometer from the nearest military line of engagement north of the city towards the Central Security Camp, Al-Juhaim Station in addition to Al-Arbaeen Front. Despite its proximity to the lines of engagement, the area remained relatively vital and populated because it had medical facilities such as Al-Rawda Hospital and educational facilities such as Zaid Al-Mushki and Bakathir schools. 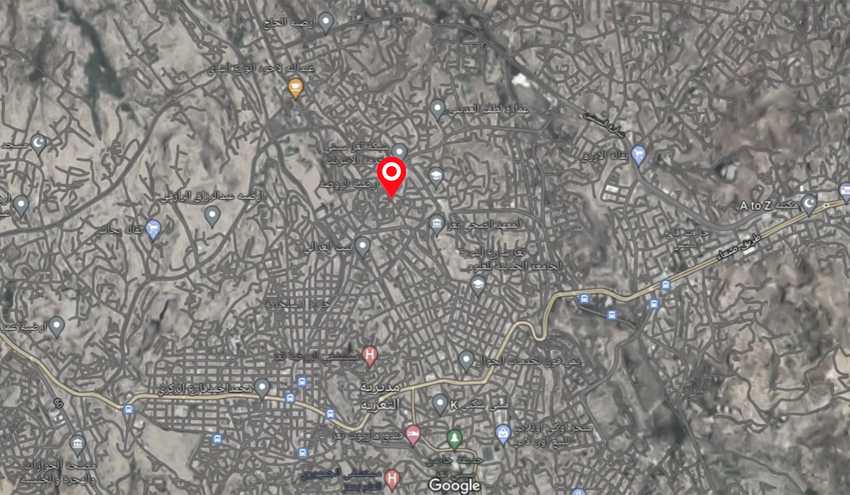 A satellite image of Taiz city from Google Maps, and the location of Al-Rawda neighborhood north of the city

On the evening of 23 July 2022, social media accounts circulated that several children were playing when injured by artillery shelling that hit Al-Rawda neighborhood, one of whom succumbed to his wounds the next day. 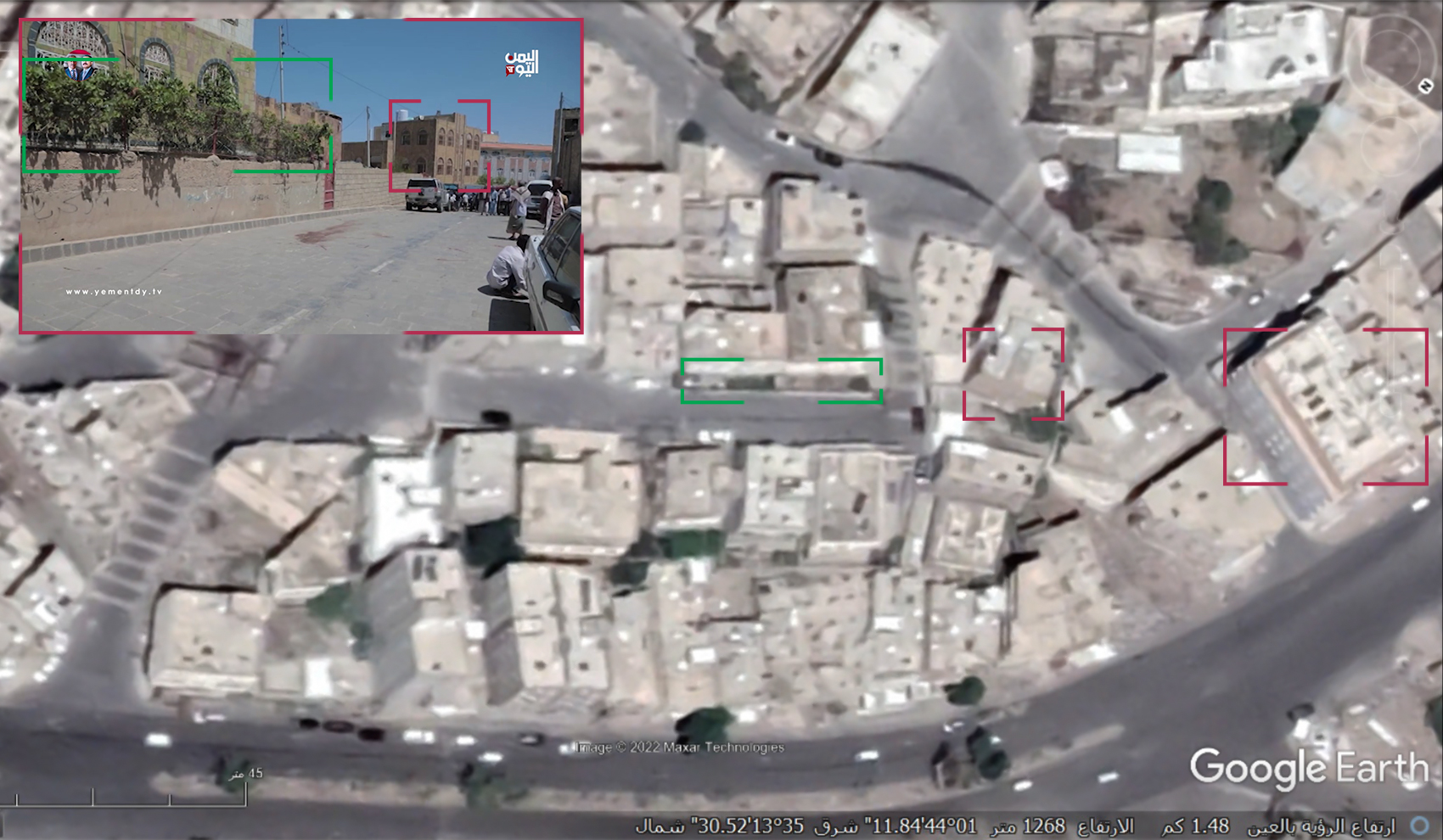 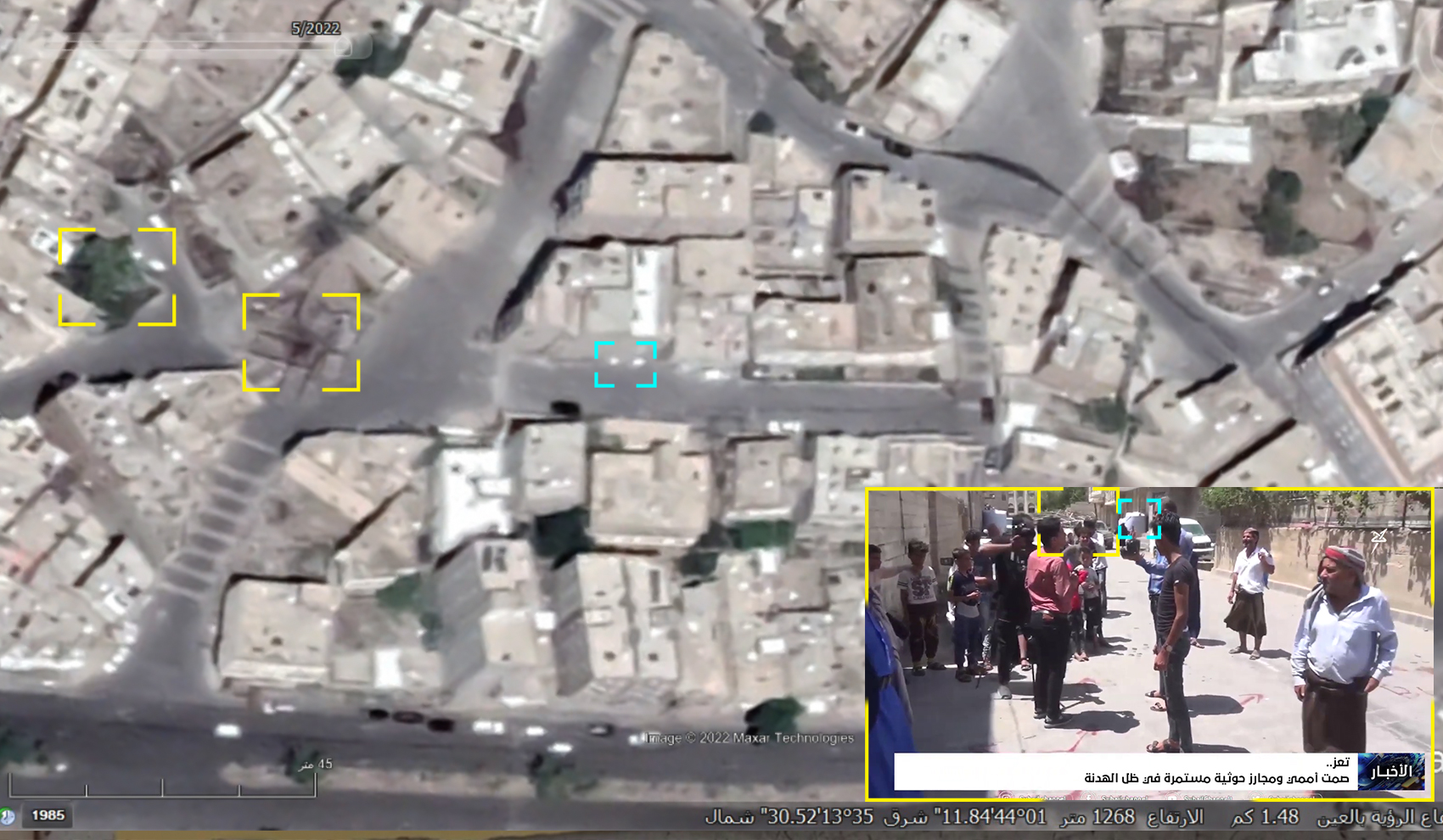 Screenshots from the videos by Yemen Today and Suhail TVs, and a satellite image from Google Earth

Al-Marsad Al-Yamani Facebook post was one of the first reports of the incident at 05:57 pm, 23 July 2022, while the hospital information about the child Albaraa in Yemen Shabab TV video stated that the child was injured at 4 pm. That is the shelling occurred in the range between 04:00 - 05:57 pm.

A screenshot from a video by Yemen Shabab showing the information about the child, Albaraa from inside the hospital

Yemeni Archive obtained photos of the shell fragments that were found near the impact site in Al-Rawda neighborhood. The fragments are from a mortar shell. Yemeni Archive team was not able to verify the exact shell caliber in the photos but based on the impact in the site, it appears that the shell is of small caliber, perhaps 60 mm or an average caliber of 81 mm.

Photos obtained by Yemeni Archive team, of the remnants of the shell that were found at the impact site in Al-Rawda neighborhood 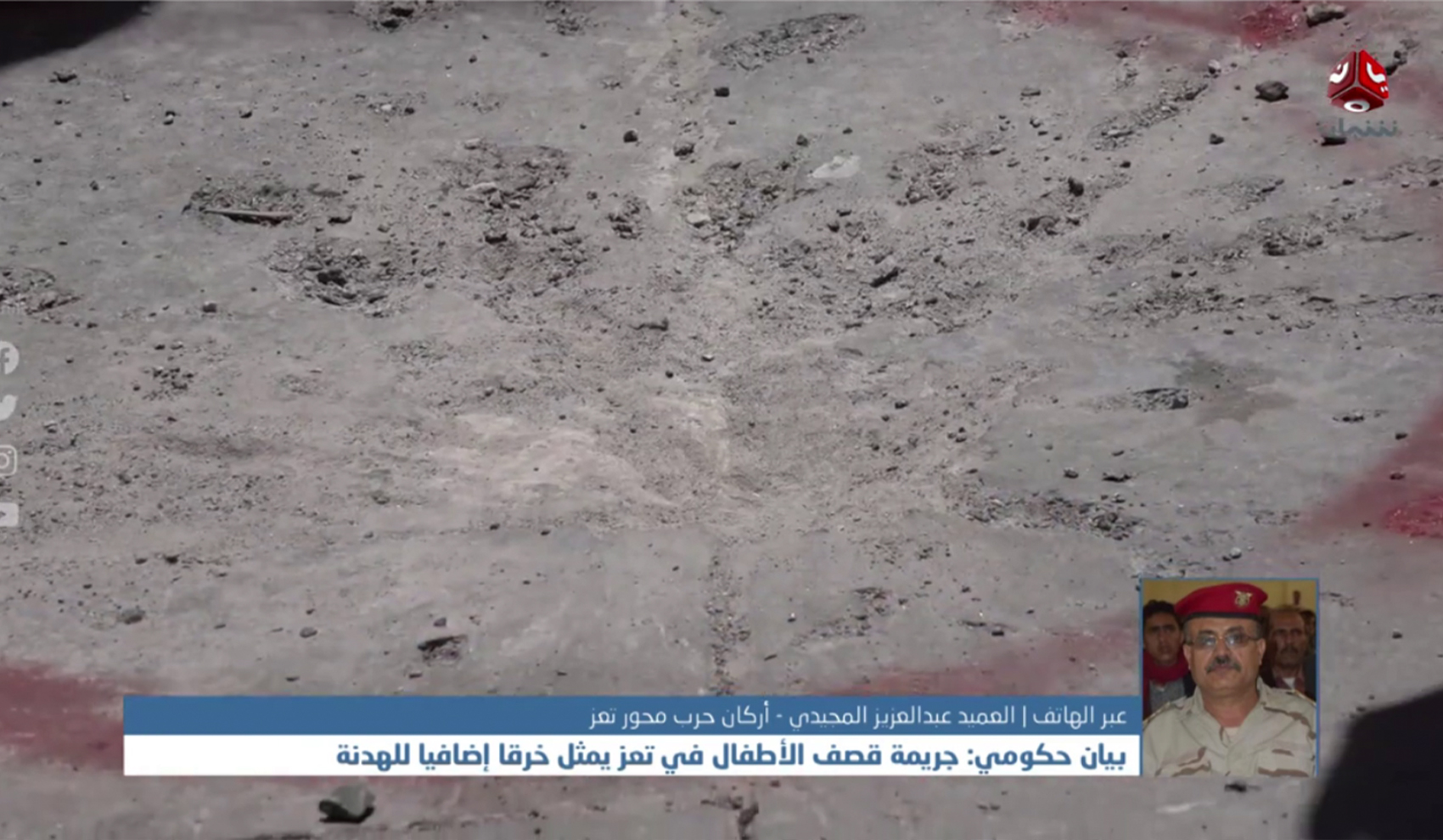 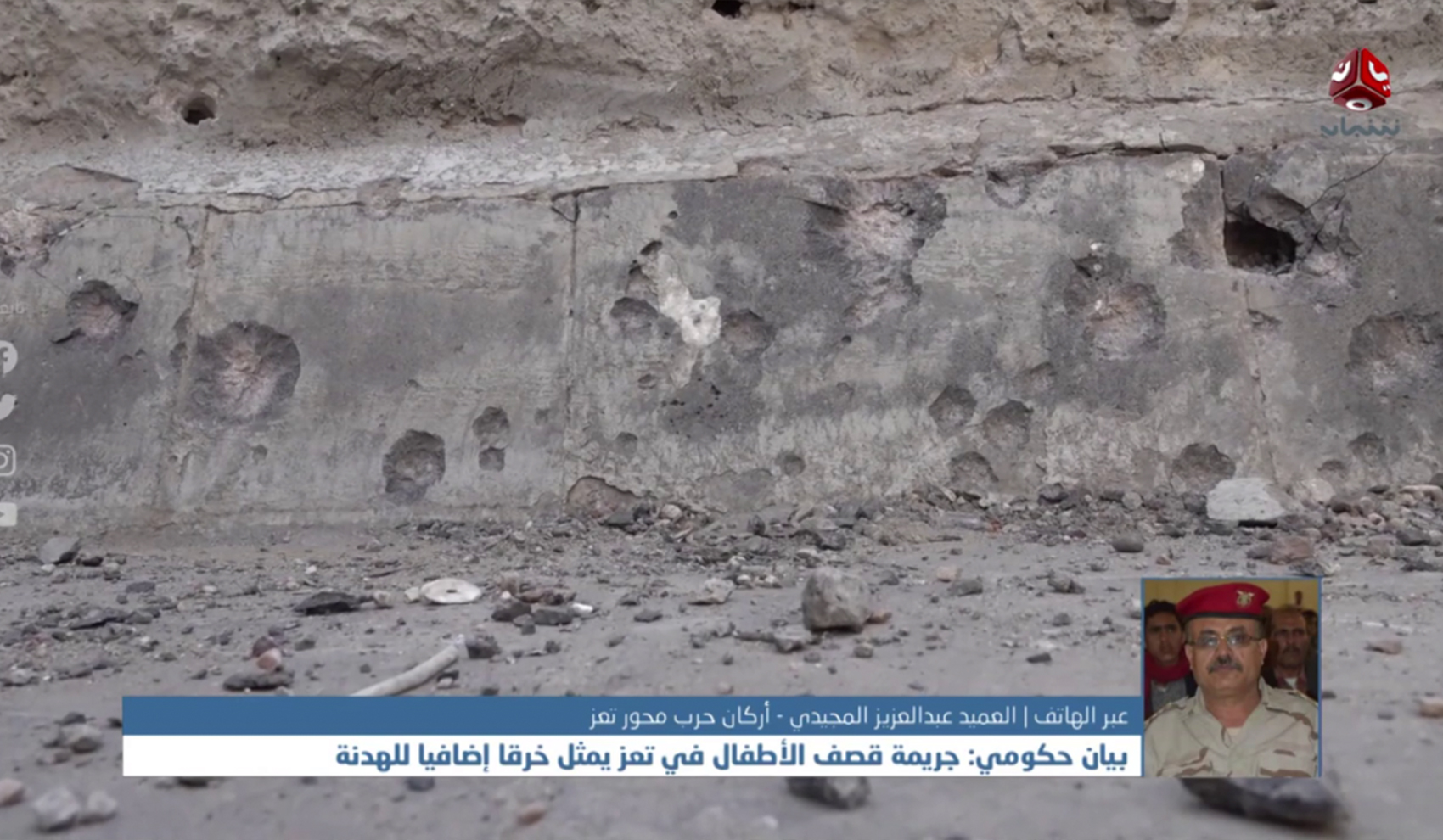 In order to determine who is responsible for the shelling, the Yemeni Archive investigation team relied on visual evidence and information related to the incident: the angle of the shell trajectory and the nature of the impact site.

The visual content of Yemen Shabab and Belqees TVs showed a person in civilian clothes - who appeared to be a forensic investigator - showing with his fingers the angle of penetration of the shell in the stone ground in the secondary road to the Al-Rawda neighborhood, indicating that the shell possibly came north of impact site, within a geographical range with a possible range of 3.5 km. About 70% of that area was under the control of the Houthis, and about 30% was under the control of government forces. 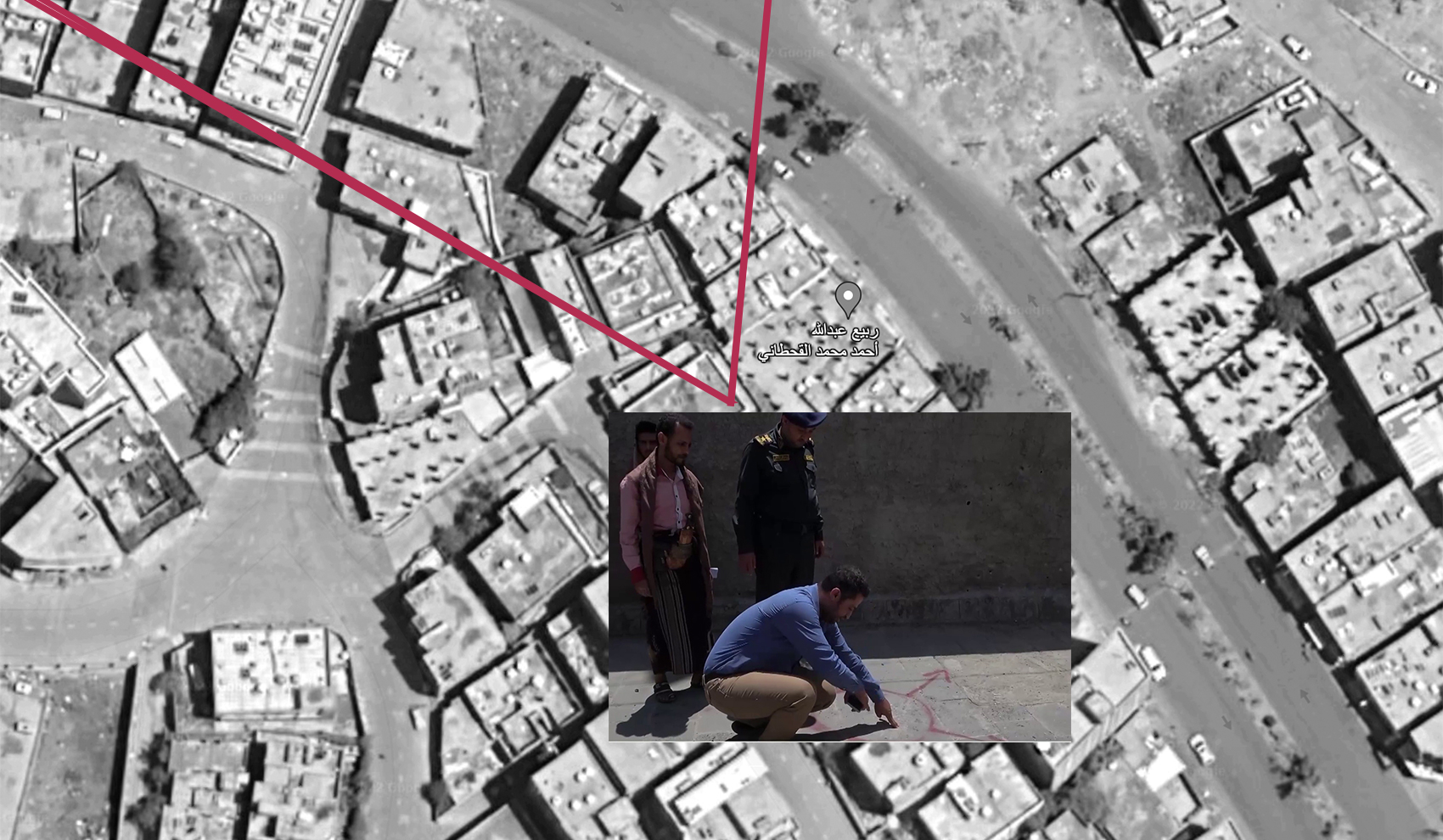 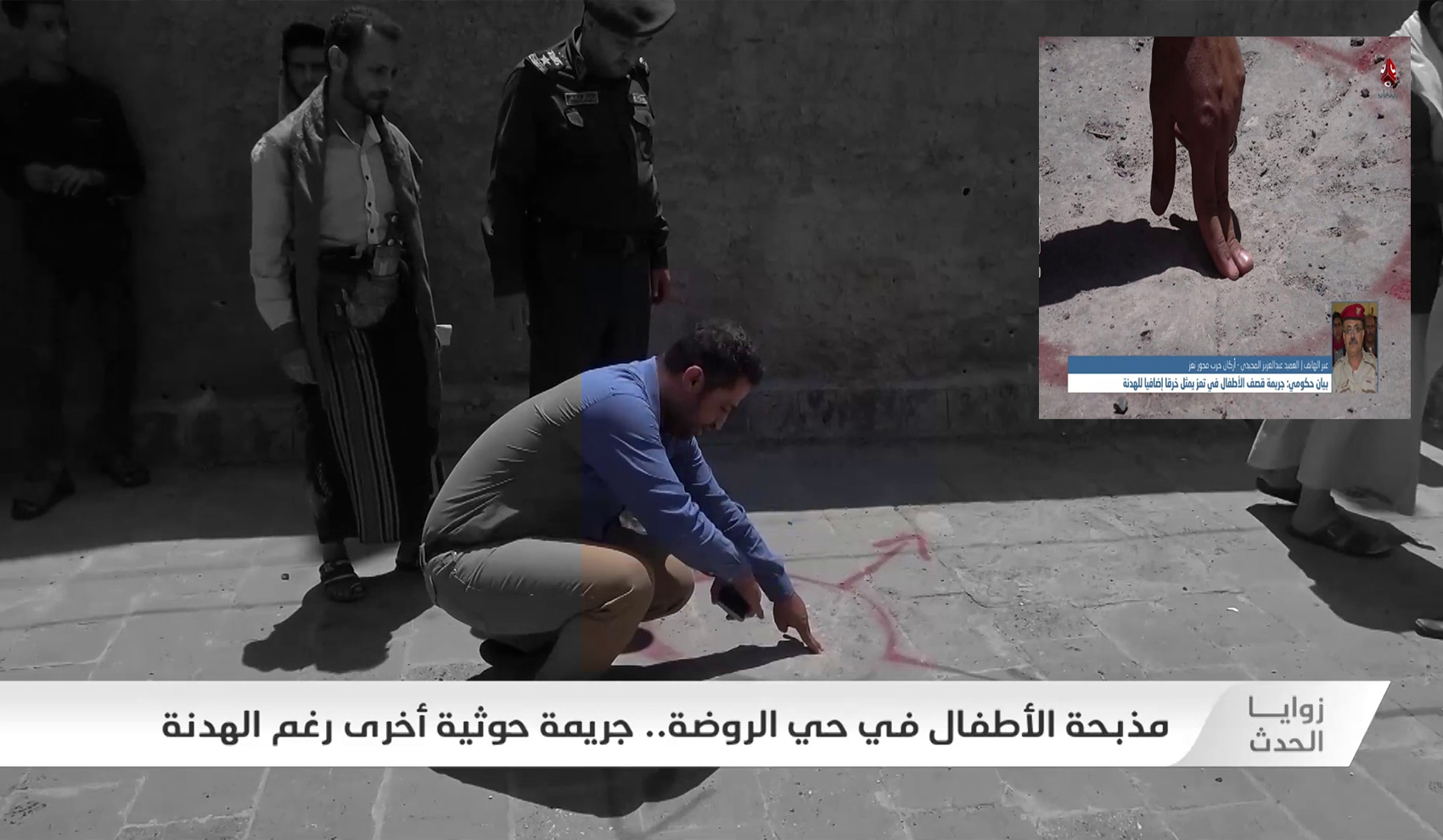 A satellite image from Google Earth, and a screenshot from Belqees TV video, showing the probable direction where the shell came from, based on the angle that was indicated by a civilian 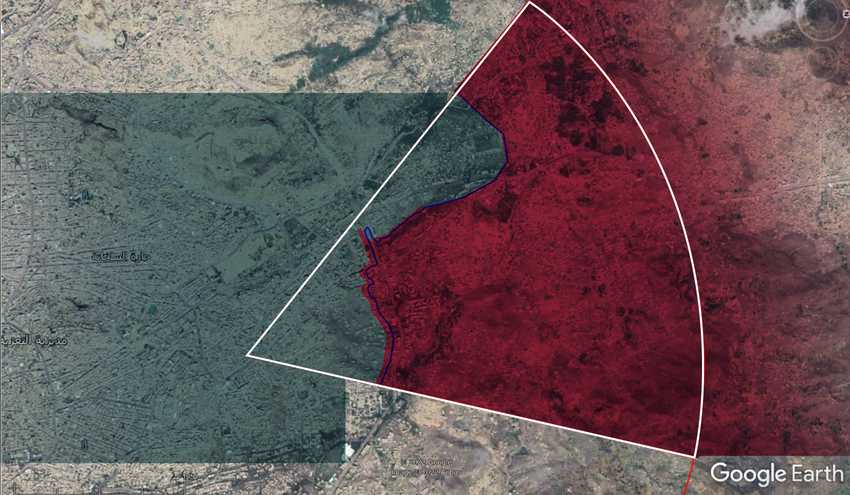 A satellite image from Google Earth, showing the direction the shell came from. The probable range of the launch is approximately 3.5 km, and the proportions of control within the range by each party. Green: the Houthis, Blue line: probable line of engagement, Light blue: Government forces.

Military forces affiliated with the 170th Air Defense Brigade of the Yemeni government were in Bakathir School, which is about 130 meters away from the impact site, according to social media posts from Taiz on 25-27 July (two days after the shelling occurred). The posts said that the Taiz Axis advisor - who is in charge of handing over government and private buildings to their owners - vacated the school of armed men.

A screenshot of a post by Faisal Al-Asali on Facebook, two days after the shelling, mentioning the evacuation of armed men from Bakathir school by Taiz Axis advisor - who is in charge of handing over government and private buildings to their owners

A screenshot of Samir al-Aqel Facebook post on 27 July 2022, mentioning the evacuation of armed men from Bakathir school 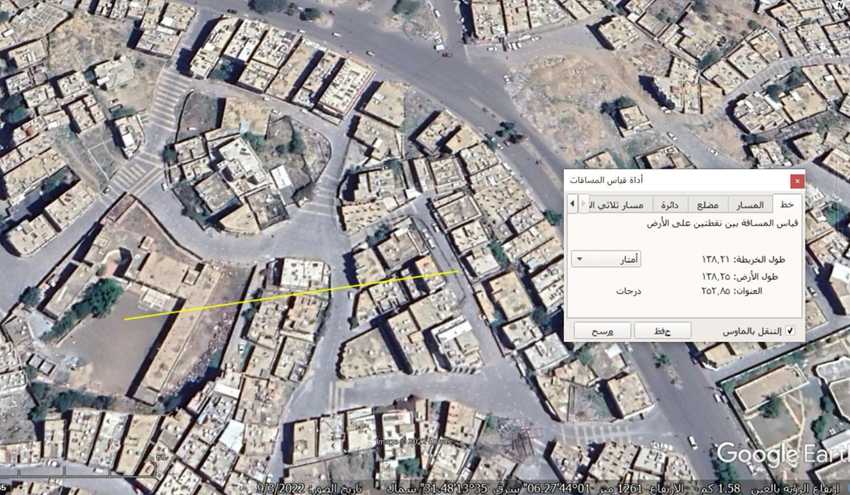 A satellite image from Google Earth, showing the distance between Bakathir School and the impact site

The shell cartridge had a circular mark next to its center/the primer which the firing pin impact to fire the shell. This suggests that the launch failed the first time because the shell was dropped into the mortar barrel while it was in the safe position – the pin deviates from the center - which requires moving the mortar from its place to eject the shell, reset the directions and adjust the mortar to the same previous direction values. Moving the mortar in this may have caused serious deviation of the shell that caused its fall in Al-Rawada nighbourhood.

A photo obtained by Yemeni Archive of the remnants of the mortar shell that fell in Al-Rawda neighborhood.

Based on the aforementioned data, we concluded that the Houthis shelled military forces in Bakathir School, breaching the UN truce, and that a shell fell on children playing in Al-Rawda neighborhood.

Children in the area

Children in Al-Rawda neighborhood used to spend their annual school vacation playing in the neighborhood. The shell fell in the evening from 3 to 6 pm, when Taiz neighborhoods were buzzing with children because it is the usual time for children to get out of their houses and play.

According to Rasd Coalition on Twitter 12 children were injured by the shell, one of whom succumbed to his wounds on the next day. 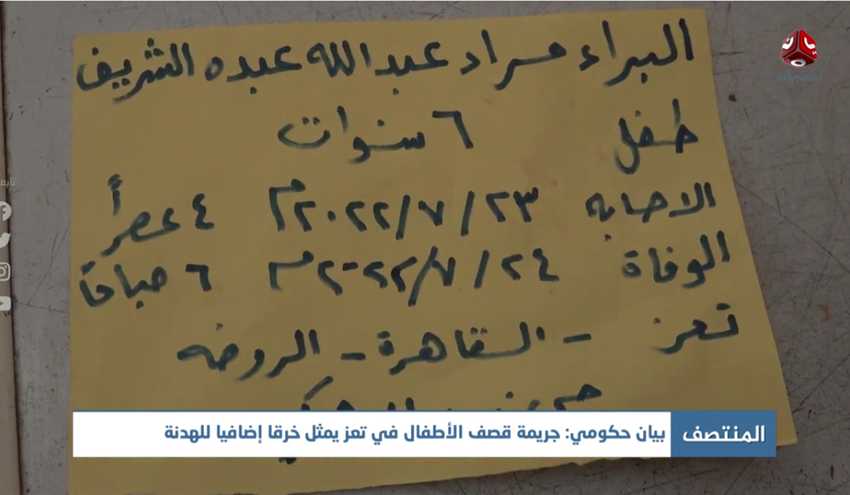 Yemeni Archive concluded that Houthi forces stationed north of Taiz city shelled with a mortar shell Al-Rawda neighborhood in Al-Qahirah District breaching the UN truce. The shell fell on a group of children, on the evening of 23 July 2022, resulting in the death of a child and the injury of 11 other children.