Airstrikes on Al-Daleel Bridge in Ibb

On 21 April 2015, several news sites and social media platforms circulated news, photos, and videos that at 9:30 am the Arab coalition forces led by Saudi Arabia targeted with two airstrikes a bridge located at the beginning of the Kassara area in Al-Daleel in the Ibb governorate at the end of Mount Samara. Al-Daleel bridge is the main road that connects the capital, Sana’a, to the Taiz governorate. This strike killed and injured many including civilians who were passing over the bridge and those who came to rescue civilians injured in the first airstrike. 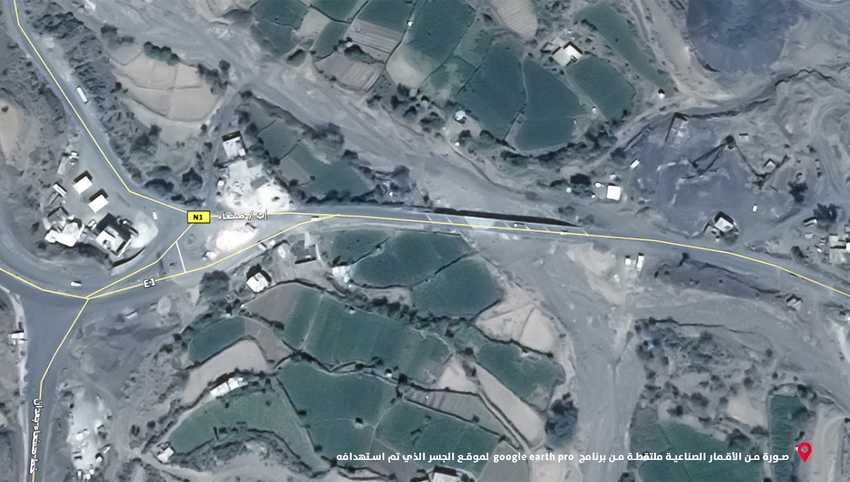 Satellite imagery from Google Earth of the attacked bridge.

What Happened (and When)?

On Tuesday, 21 April 2015, the Arab coalition forces led by Saudi Arabia targeted a bridge in the Ibb governorate with two airstrikes at 09:30 local time. The first airstrike hit the bridge and killed passersby scattering body parts on and around the bridge. When civilians rushed to rescue the injured, the planes returned, flying over the bridge again as shown in a video published by the Director General of the Committee on Public Freedoms and Human Rights in the Yemeni Parliament Kahlan Sofan on Youtube.

In order to estimate the time of the attack, Yemeni Archive’s investigations team utilized published reports detailing the incident with the timestamp from the first post alerting of each air raid. The Legal Center for Rights and Development published a report that the attack was at 9:30 a.m, while the first tweet related to the incident was published on Twitter at 11:37 am by Masdar news. The second tweet about the incident was published at 11:45 am by Aden News Network, which reported of a bombing on the Al Daleel Bridge, which is located in the Naqil Samara area of the Ibb governorate.

The “Ibb Youth Forum, Al-Daleel, Al-Makhadir Al-Sahwal” group on Facebook posted the first alert related to the incident at 11:32 am, talking about the targeting of Al-Daleel Bridge by the Arab coalition.

At 12:11 pm, the account of Dia Muhammad Abd al-Latif on Facebook posted a video showing people gathering around the bridge to rescue and recover the bodies of the victims.

At 2:13 pm, the account of Nayef Muhammad Al-Qabatli on Facebook published a video showing body parts and the impact site.

The shadows appeared in Nayef Muhammad Al-Qabatli’s video and analyzed using the shadow calculator tool, indicates that the incident likely occurred at around 09:30. 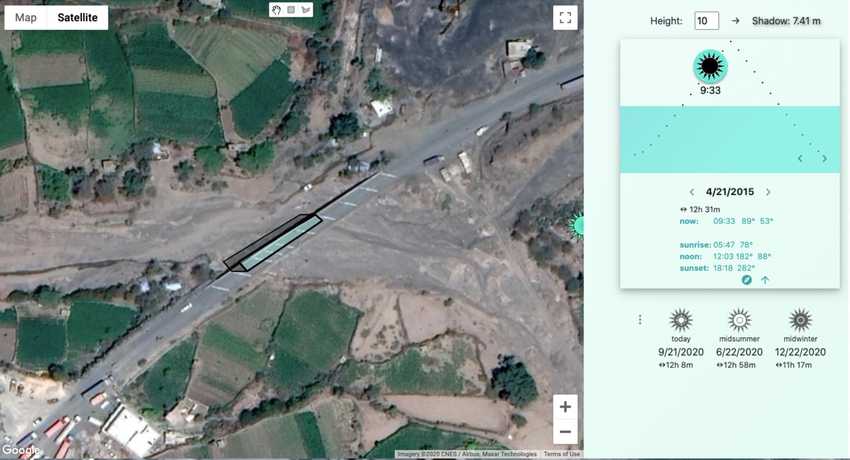 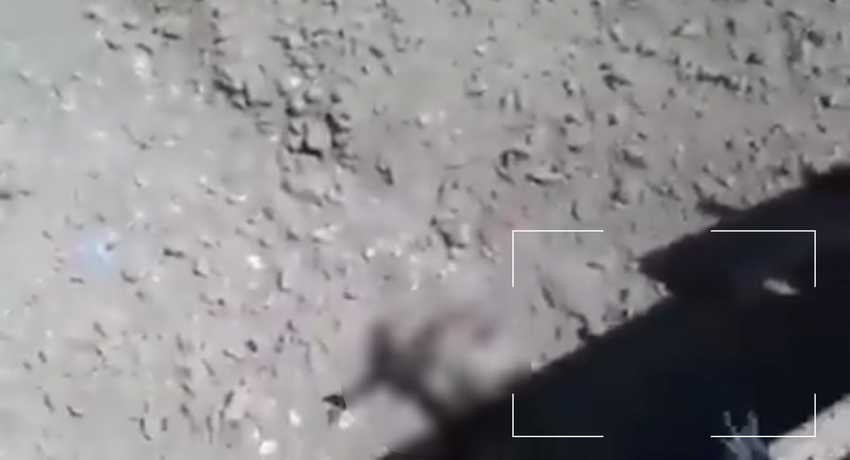 After analyzing the content and landmarks that appeared in posts from multiple open-sources and matching them with satellite images, Yemeni Archive found that the location hit in the attack on Al-Daleel bridge was at coordinates 14.112688, 44.209714. 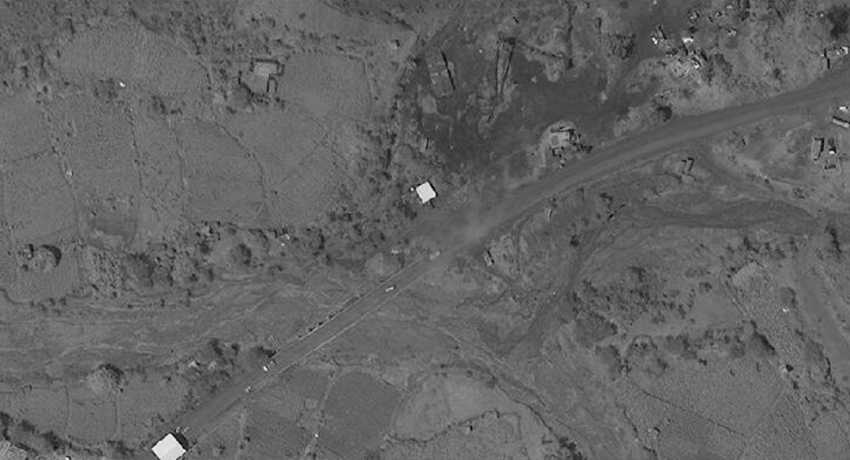 Satellite imagery from Google Earth of the attacked bridge.

Citizen Abu Abdul Rahman Mastour Al Zamani, who lives near the bridge area, published a photo of the impact site after the attack, which was compared with satellite imagery from Google Earth Pro of the bridge. 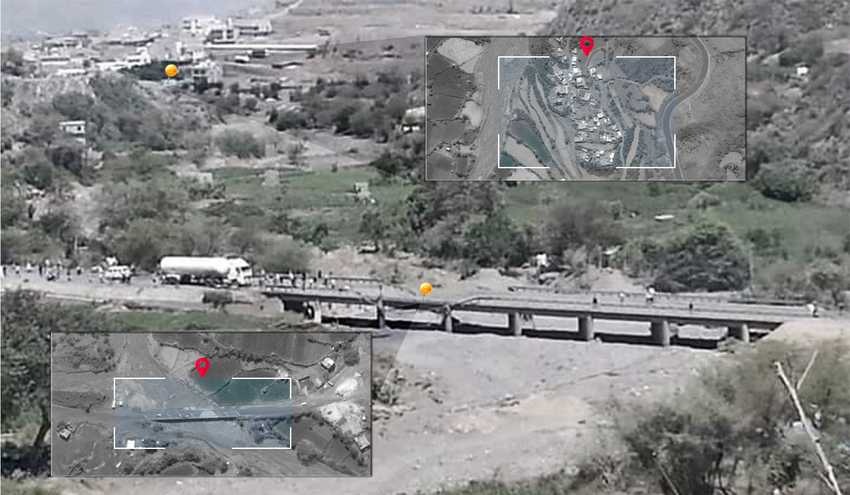 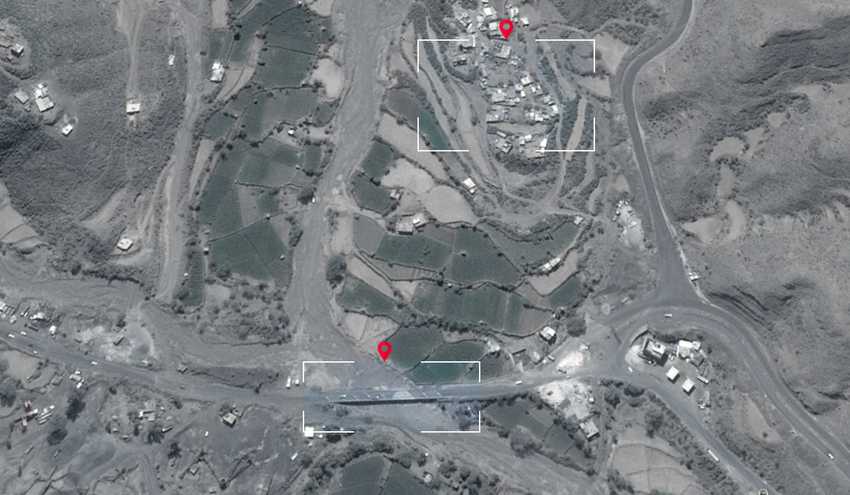 The mountains that appeared in a video published by Diaa Mohamed Abdel Latif on Facebook match the mountainous terrain that appears in the satellite imagery from Google Earth Pro, confirming the location of the attack. 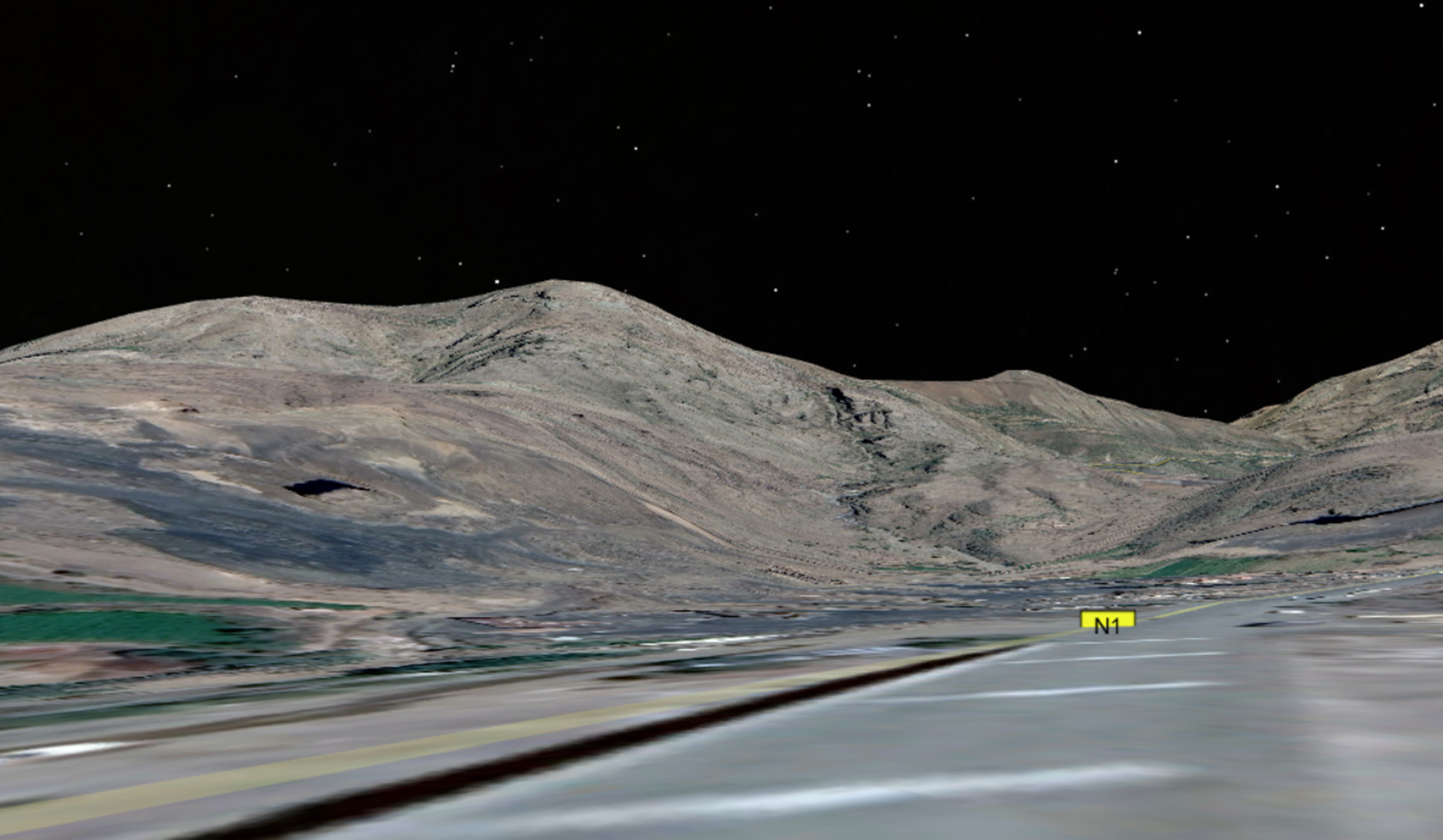 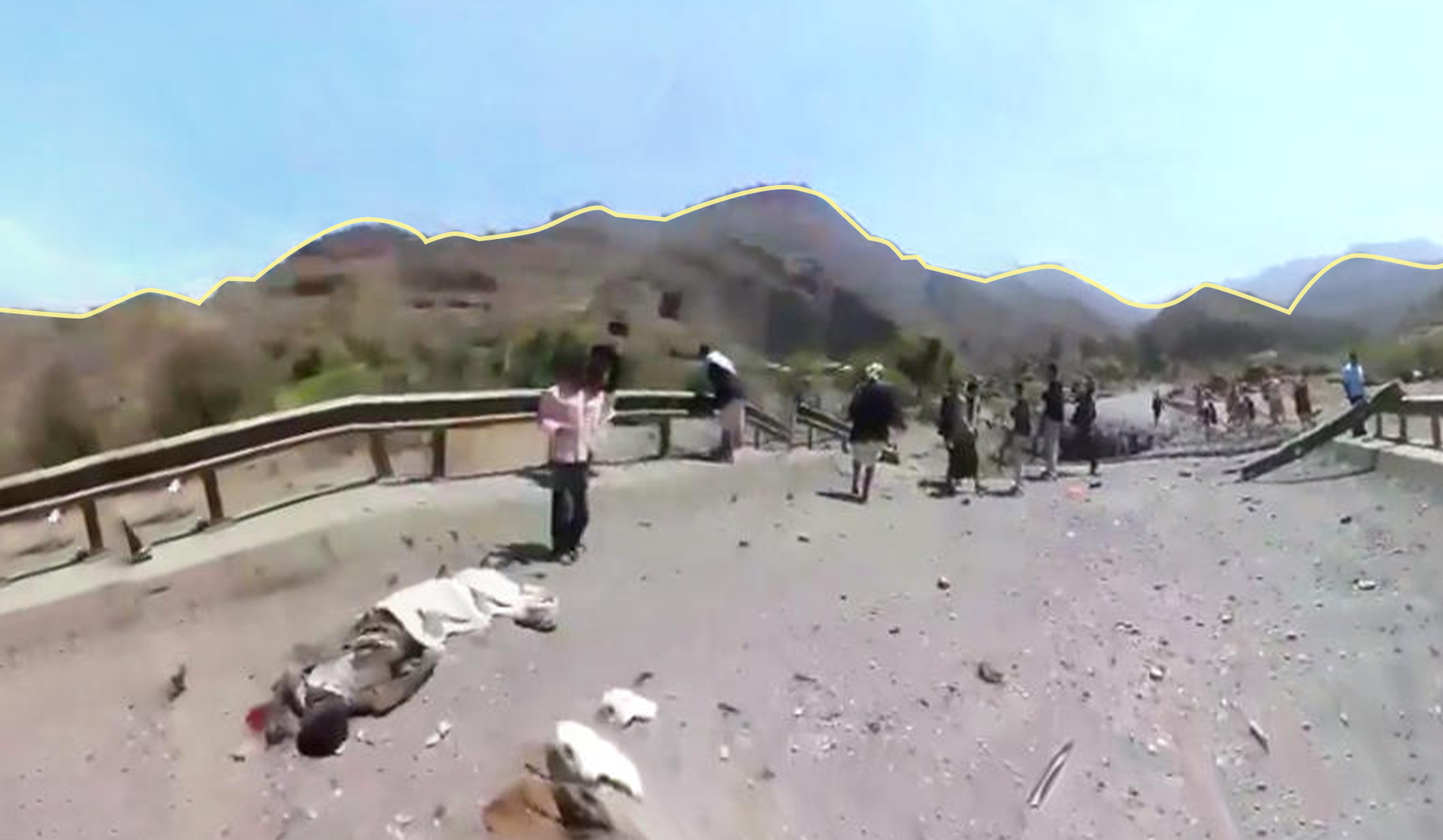 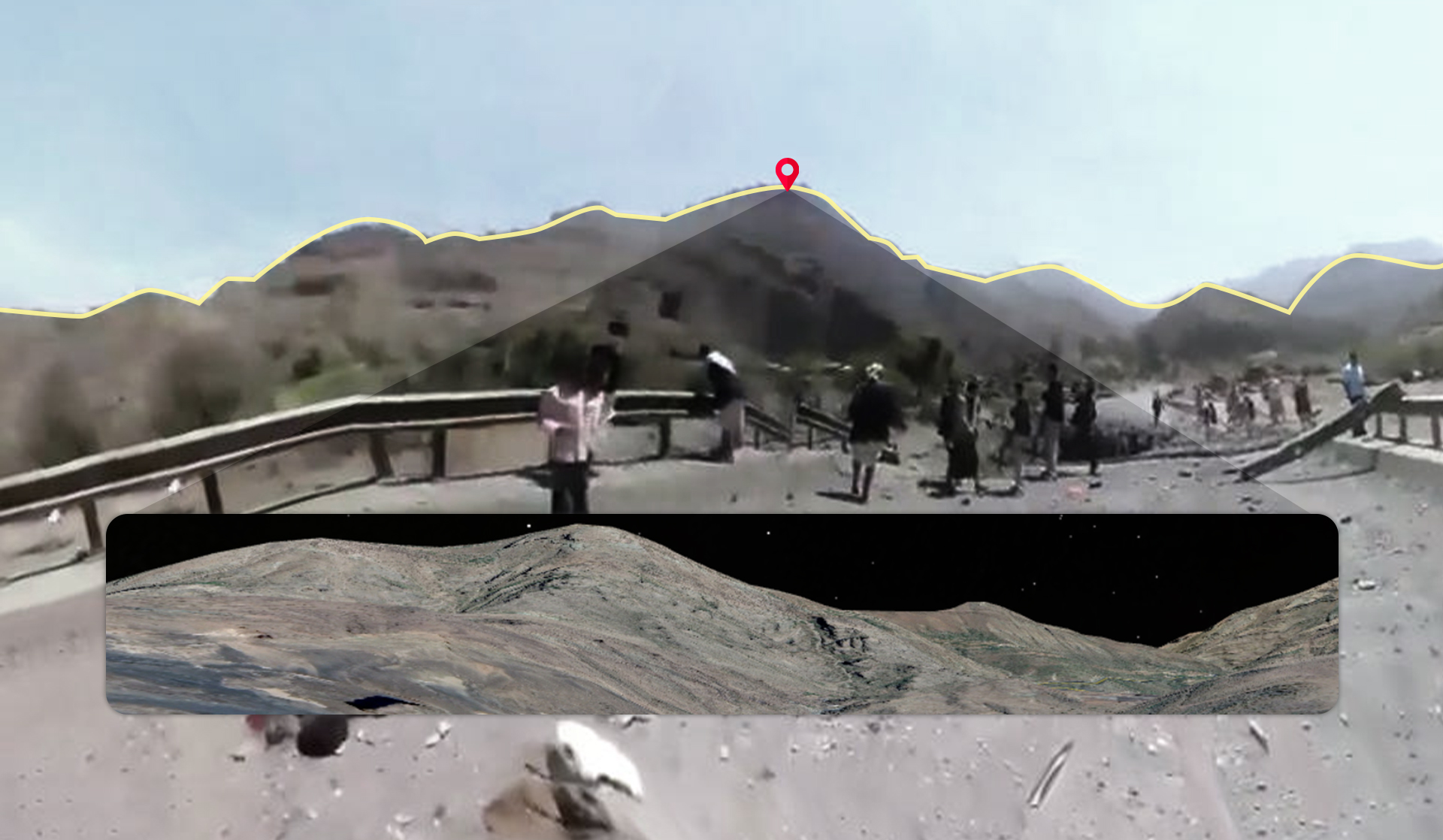 Yemeni archive constructed a 3D model of the bridge to show the scale and intensity of the attack.

Citizen Tamer Al-Khawlani published a a photo showing a white truck at the beginning of the bridge after the targeting. It matches the truck in the video published by resident Diaa Muhammad Abdul Latif. The Al-Fajr Gate news channel also published a photo of the bridge showing the crater of the attack with the white truck and the mountainous terrain in the background matching what had been shown in different videos detailed above.

In addition, the “Ibb Youth Forum, Al-Daleel, Al-Makhadir Al-Sahwal” group on Facebook published a photo of the bridge after the attack, which was compared with footage taken from a video posted by the account of Mohmmed Musfer on Facebook, both images show the same house, the red plate with the mountainous terrain in the background from the other side of the bridge, and the crater of the missile. 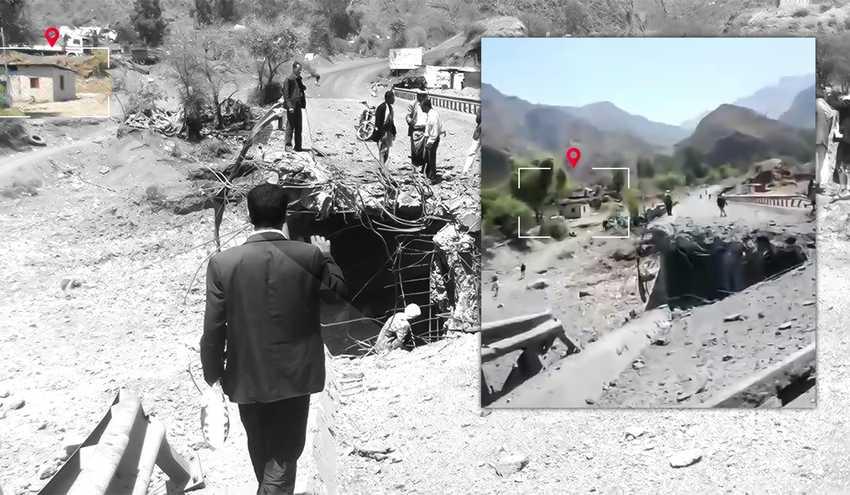 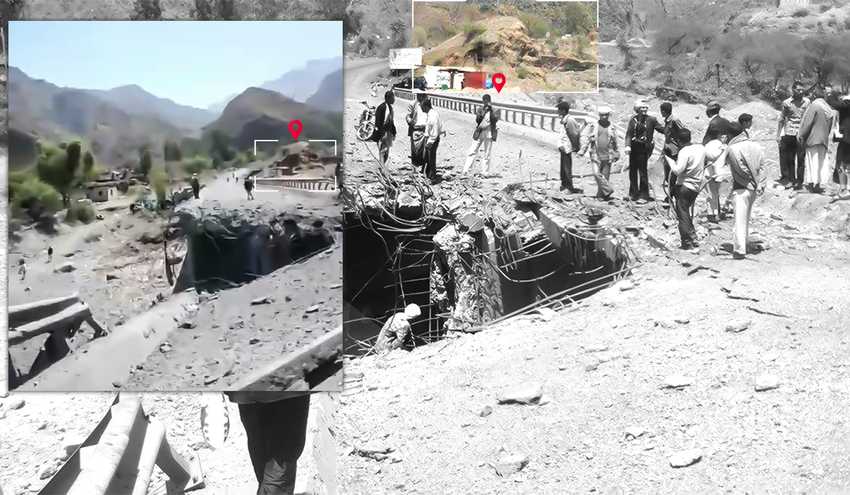 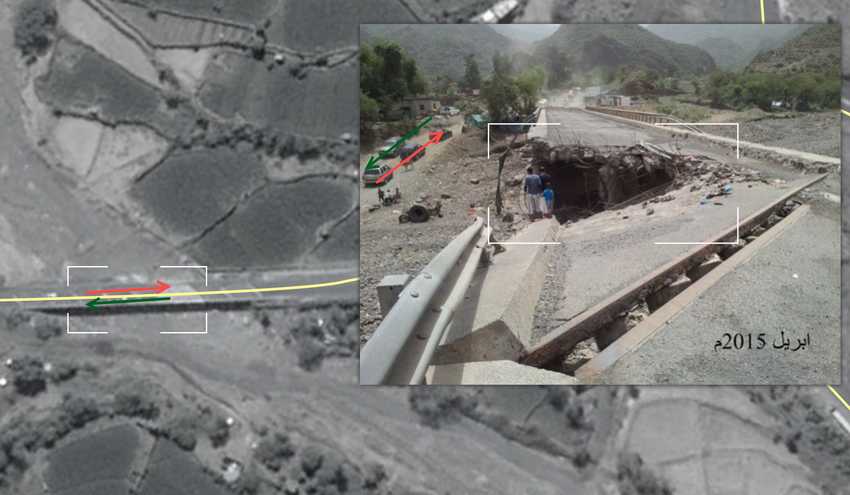 Moreover, the official Facebook page of the General Corporation for Roads and Bridges published pictures of the bridge repair process. The photos were compared with a photo published by the Al-Fajr Gate news channel of the bridge after the targeting. The same landmarks in the images confirm that it is the same bridge. 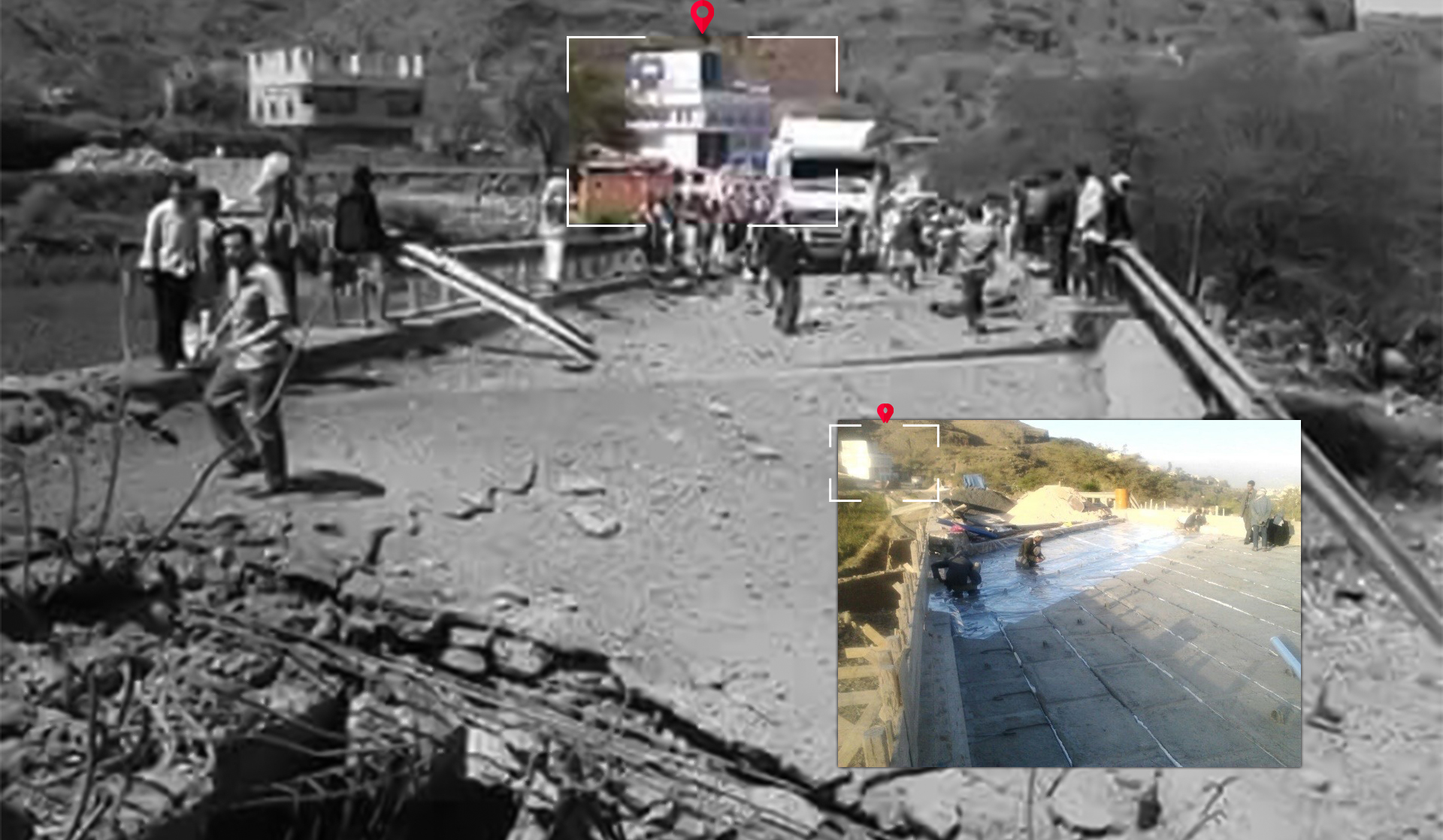 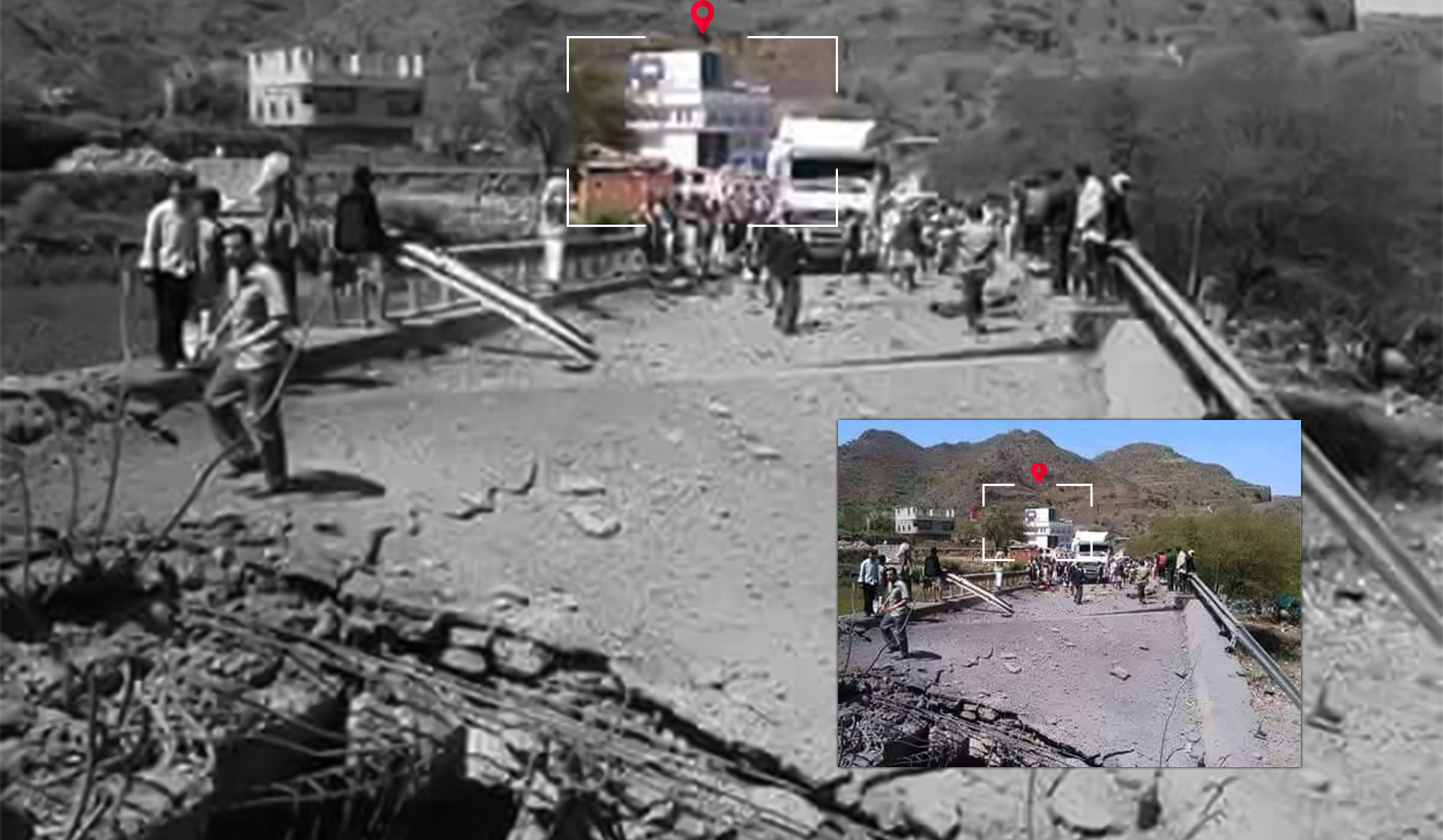 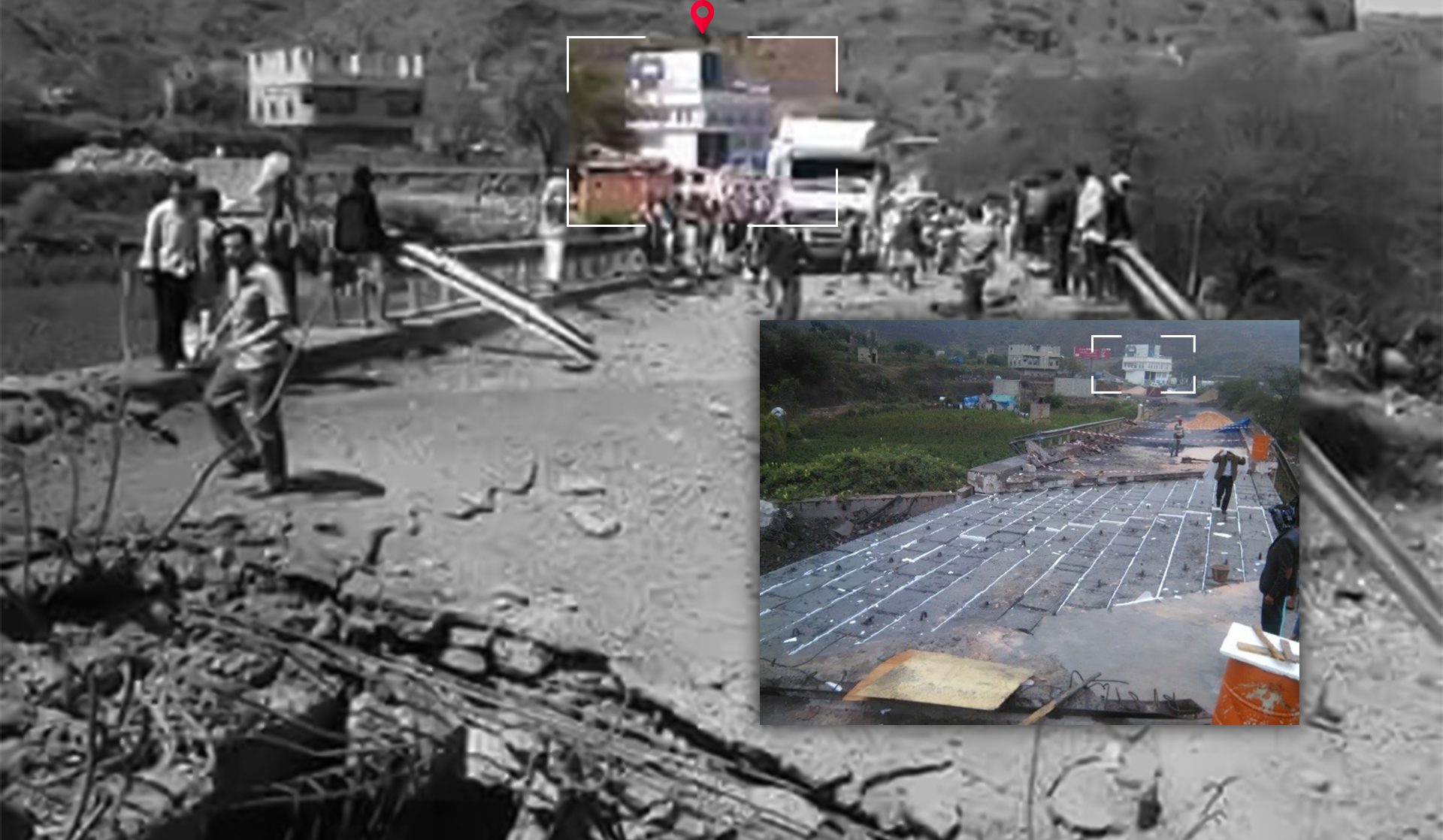 On 19 February 2016, the Yemeni Media Center published an article that Al-Daleel Bridge was back in service 10 months after its destruction. The account of the citizen photographer Fouad Al-Harazi on Facebook also published a photo showing the bridge after it was repaired.

The death toll of the attack differed amongst sources. Some claimed that there were 110 casualties (40 killed - 70 injured), while others indicated that there were 20 killed and 30 injured. The Legal Center for Rights and Development of Ansar Allah (Al-Houthis) claimed in a report that 18 were killed and 26 were wounded with various injuries. The Yemeni Archive also obtained additional names and information about the victims from the Legal Center for Rights and Development after publishing the report, making the total number of deaths 25.

A list of the names of the victims of the attack on Al-Daleel Bridge in the Al-Mukhadir District - Ibb governorate by coalition warplanes.

The names of those killed, according to the Legal Center for Rights and Development

The Yemeni archive was able to interview the families of those who died in the targeting, including an interview with the mother of Sabri Qasim al-Naqib, killed in the strike:

“I am 65 years old now, but the five years that have passed since my son’s death were the longest and most painful years in my life. I feel as if I haven’t woken up yet from the shock of that day. I was affected with several ailments as a result of shock, including having high blood pressure and diabetes. I cannot survive without using medication. Whenever I remember my son, I feel very sad, and I only hope that this unjust coalition will be held accountable for the crimes of targeting and killing innocent people.”

The Legal Center for Rights and Development published a report with other testimonies of the strikes on Al-Daleel Bridge in the Ibb governorate. One of the interviews was with Akram Abdulrahman Al-Jaama, the brother of Bassam Al-Jaama, who was killed in the second airstrike on the bridge.

Akram said: “My brother Bassam and one of his friends rushed to help the injured after the missile that targeted the bridge, but the Saudi-led coalition warplanes fired a second missile killing my brother and his friends. He was 35 years old at the time. He was just a worker. His death was a huge tragedy for the whole family and I, even until today. I didn’t feel such sadness and pain in my life as when I felt when I lost him that day. Another family member was injured in the same attack as he was driving his motorbike over the bridge at the time of the strike. All we wish is for the Saudi-led coalition to be held accountable for every crime that it has committed against civilians and innocent people. When I saw the massacre after the bombing, I froze from the shock of what I was witnessing. At first, I couldn’t even recognize my brother. The body parts were all over the place, in a way where it was impossible to recognize anyone. We were contacted later to collect his body.”

The Yemeni Archive’s investigations team collected statements from eyewitnesses of the Al-Daleel incident in the Ibb governorate. Conducted five years after the targeting of Al-Daleel Bridge, one of the interviews was with Abdul Wahab Al-Ansi, the owner of the rock crusher machine 150 meters away from the bridge damaged by the pressure and shrapnel of the blast. 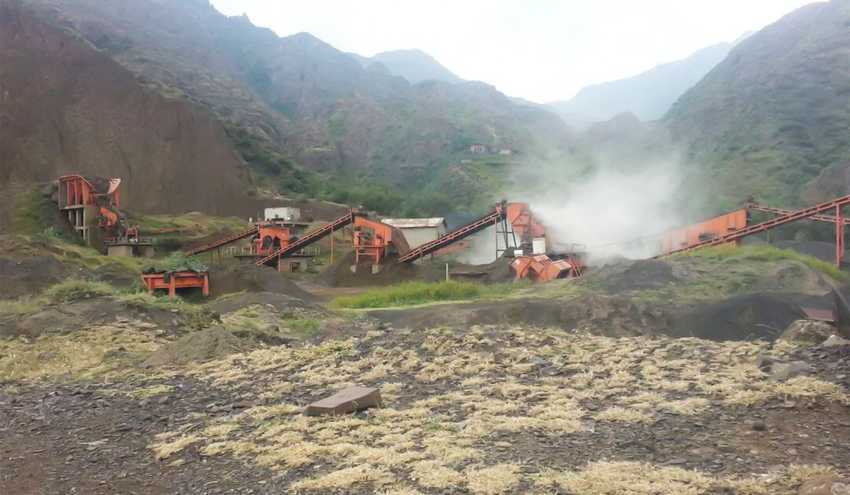 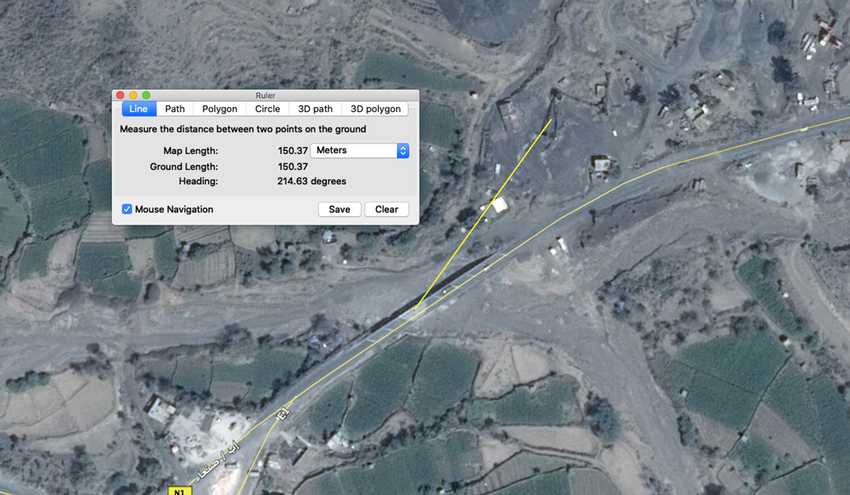 Satellite imagery from Google Earth of the attacked bridge and the crusher machine 150 m away.

The Saudi Press Agency published the comments of the spokesperson’s for the Joint Accidents Assessment Team in Yemen (JIAT), Legal Counselor Mansour bin Ahmed Al-Mansour, on the the claims within a report issued by the United Nations High Commissioner for Human Rights on 07/09/2015. The UN report included that on 21 April 2015, 40 civilians were killed and 70 civilians were injured as a result of airstrikes targeting the Al-Daleel Bridge in the Ibb governorate. It reported that two airstrikes hit the bridge and the road leading to the Sana’a governorate, causing a large number of civilian casualties. According to the report, those who ran to help the injured after the first explosion were hit by a second strike. The spokesperson indicated that the JIAT verified the incident and reviewed all the documents, including the procedures, rules of engagement, the schedules of daily air missions, video recordings of the mission, and satellite images.

After assessing the gathered evidence, the JIAT found that the civilian necessity of the bridge was null given the alleged Houthi usage of the bridge according to JIAT surveillance and reconnaissance. According to the JIAT, Coalition forces carried out an aerial mission on 21 April 2015 against the alleged military target of Al-Daleel Bridge using two bombs with a two-minute time interval between the first and the second bombing. After viewing video recordings of the executed mission, the JIAT concluded that the bridge was clear of civilians and vehicles during the time of both attacks.

According to its spokesperson the JIAT concludes that the bridge was clear from civilians at the time of the bombing and that the procedures of the Coalition Forces in dealing with military objectives were correct and in accordance with international humanitarian law and its customary rules.

Through interviews with eyewitness and an analysis of online open-source media, the Yemeni Archive is able to confirm that Al-Daleel bridge in the Ibb governorate was attacked at around 09:30 on 15 April 2015. Two bombs from Saudi-led coalition warplane hit the bridge at two minutes apart. The attack resulted in many deaths and injuries and partially damaged the bridge, the homes of some civilians living under the bridge, in addition to the destruction of a nearby rock crusher machine. The Yemeni Archive team was unable to find neither the remnants of the weapon used at the targeted site nor the images of its remains in the content available online.