Incidents identified by Yemeni Archive from open-source information collected in our “attacks on infrastructure by the two parties to the conflict including by the Saudi-led coalition in Yemen” database reveal a large number of attacks partially or totally destroyed medical and educational facilities as well as bridges and roads in Yemen.

Focusing on attacks on bridges, this open-source investigation examines allegations of attacks by the Saudi-led coalition on the Khaifa Bridge located in the Al-Aman area of the Najjarah district in theHajjah governorate. The bridge was hit by four separate airstrikes in two incidents that occurred between January 26 and 28, 2017. The strikes destroyed the bridge as well as killed three civilians.

The airstrikes cut off the road for citizens and merchants attempting to enter and leave the Al Aman area, which is inhabited by around 3000 people. Locals were forced to use an alternative route through the valley, which often in the rainy season floods making it impossible to cross. With around 18 meters of the 100 meter long bridge necessitating repairs, the cost of repairing and reconstructing the destroyed parts of the Khaifa` Bridge is around 175 million Yemeni riyals, which is about 700 million US Dollars.

The Khaifa Bridge is located in the Hajjah Governorate in northwestern Yemen on the road connecting the northern governorates of Amran and Sana’a with the coastal Hodeidah governorate in the west. These governorates are controlled by Ansar Allah (Houthis forces) making the bridge a primary target for Saudi-led coalition forces who often target to prevent the movement of the Houthi forces within these areas.

The Al-Hudaydah Governorate is considered one of the most important strategic cities for the Houthi Ansar Allah forces because of its vital ports, such as the Hodeidah Port, Al-Salif Port and Ras Issa Oil Port. International reports and the UN Envoy in Yemen led by Martin Griffiths suggest weapons smuggling, such as drones, and the collection of large payments used to finance the Houthi forces occur at these ports . 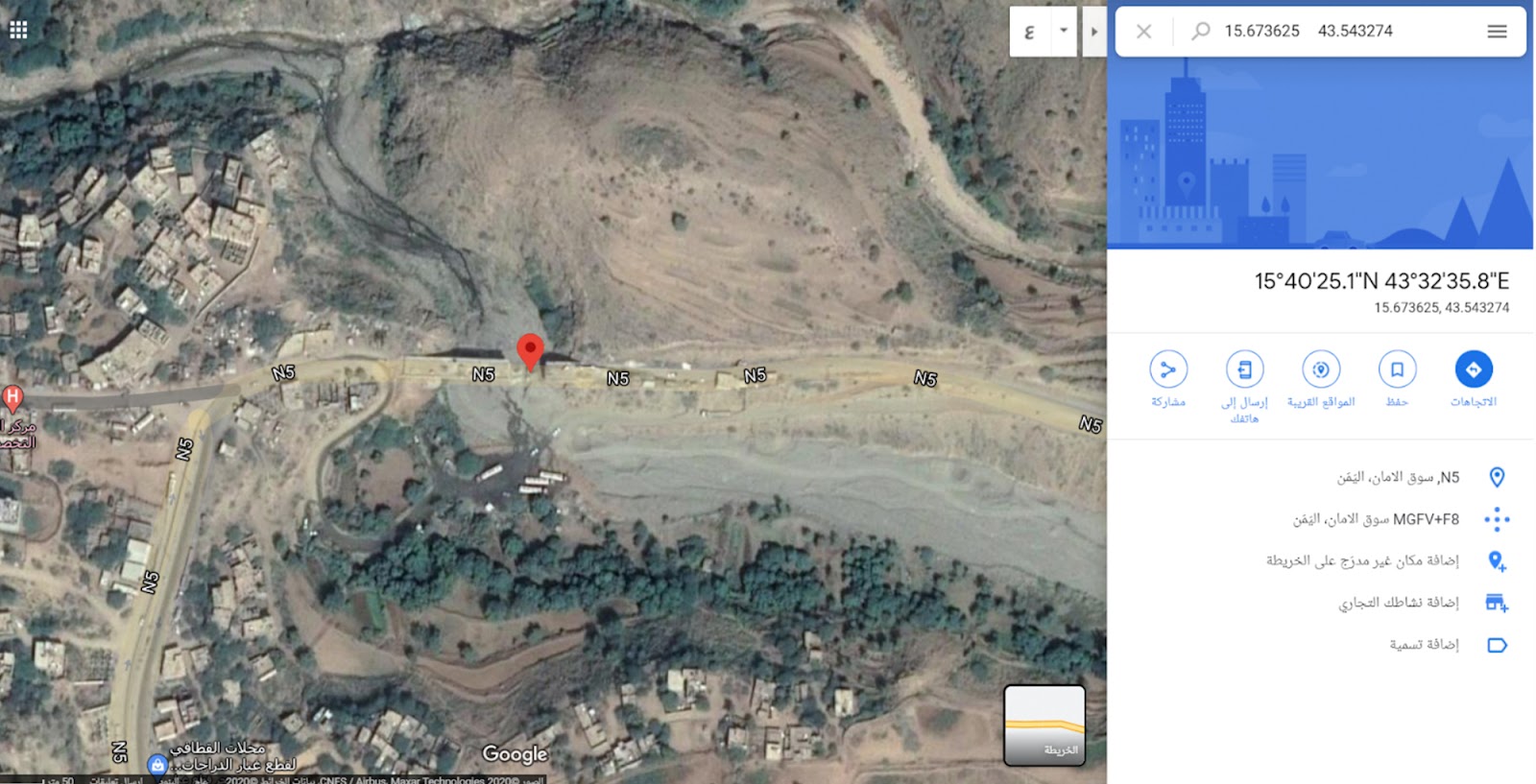 A satellite image from Google Maps of the Bridge’s location

When did the attacks occur and how?

Reports were published on social media and news sites on January 26, 2017 claiming that the Khaifeh bridge in the Al-Aman area was targeted by two airstrikes. The first post online alerting of the attack was posted by the local source “Mohammed Audin”’ on Twitter at 09:33 pm local time. The “yamanyoon” news site also published news including pictures taken at night that show two craters on the road from, what the source claims to be, an air raid on the bridge..

A picture of the first claim by a local source “Mohammed Audin” on Twitter about the incident.

A picture from the “Yamanyon” news site

Several social media accounts, news sites, and news networks circulated photos and videos of the attacks on the Khaifeh Bridge in the Al-Hajjah Governorate. These pieces of media provide visuals that match with the pictures published by the “yamanyoon” news site further confirming the news of an attack on the Khaifeh bridge. 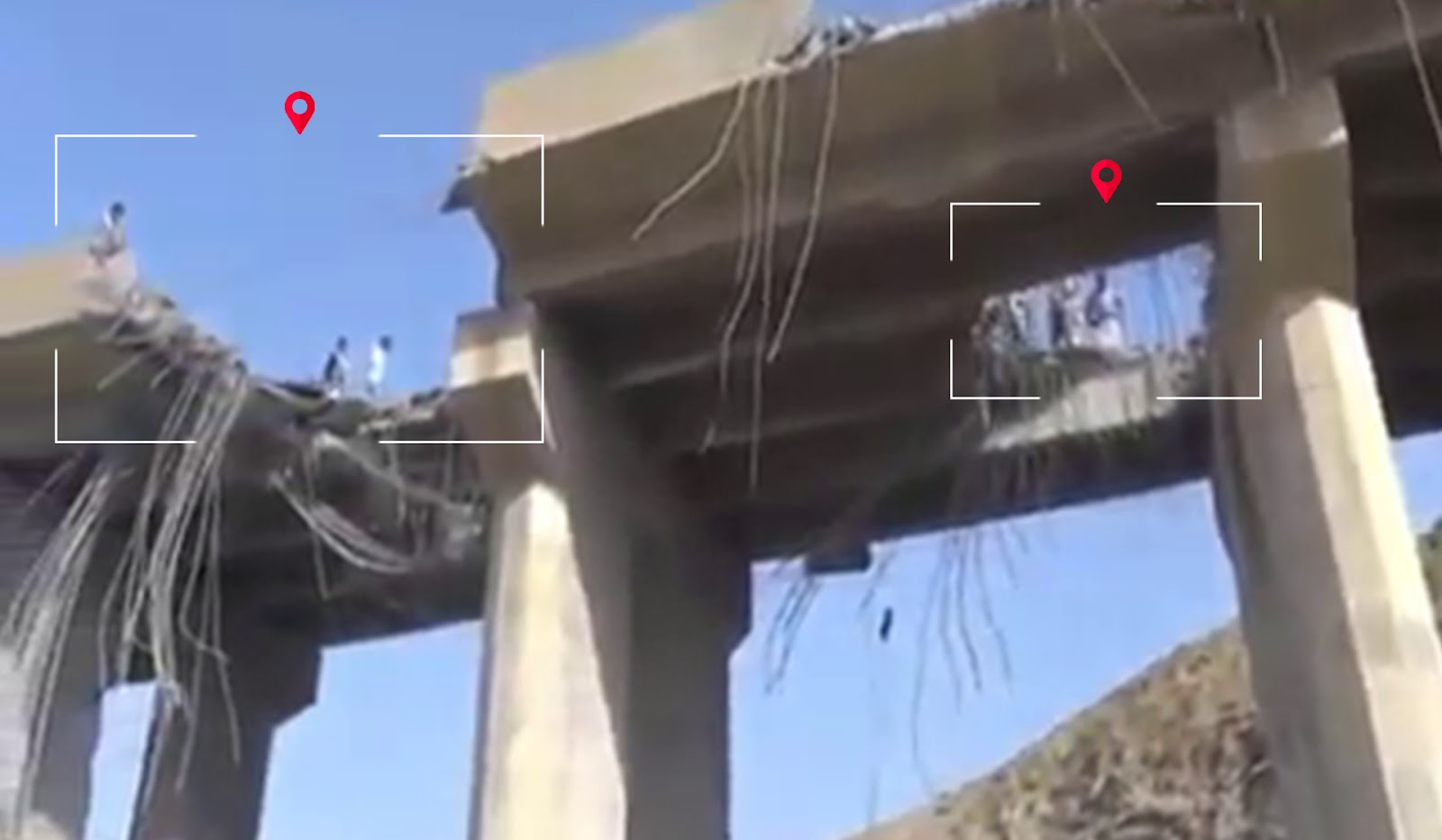 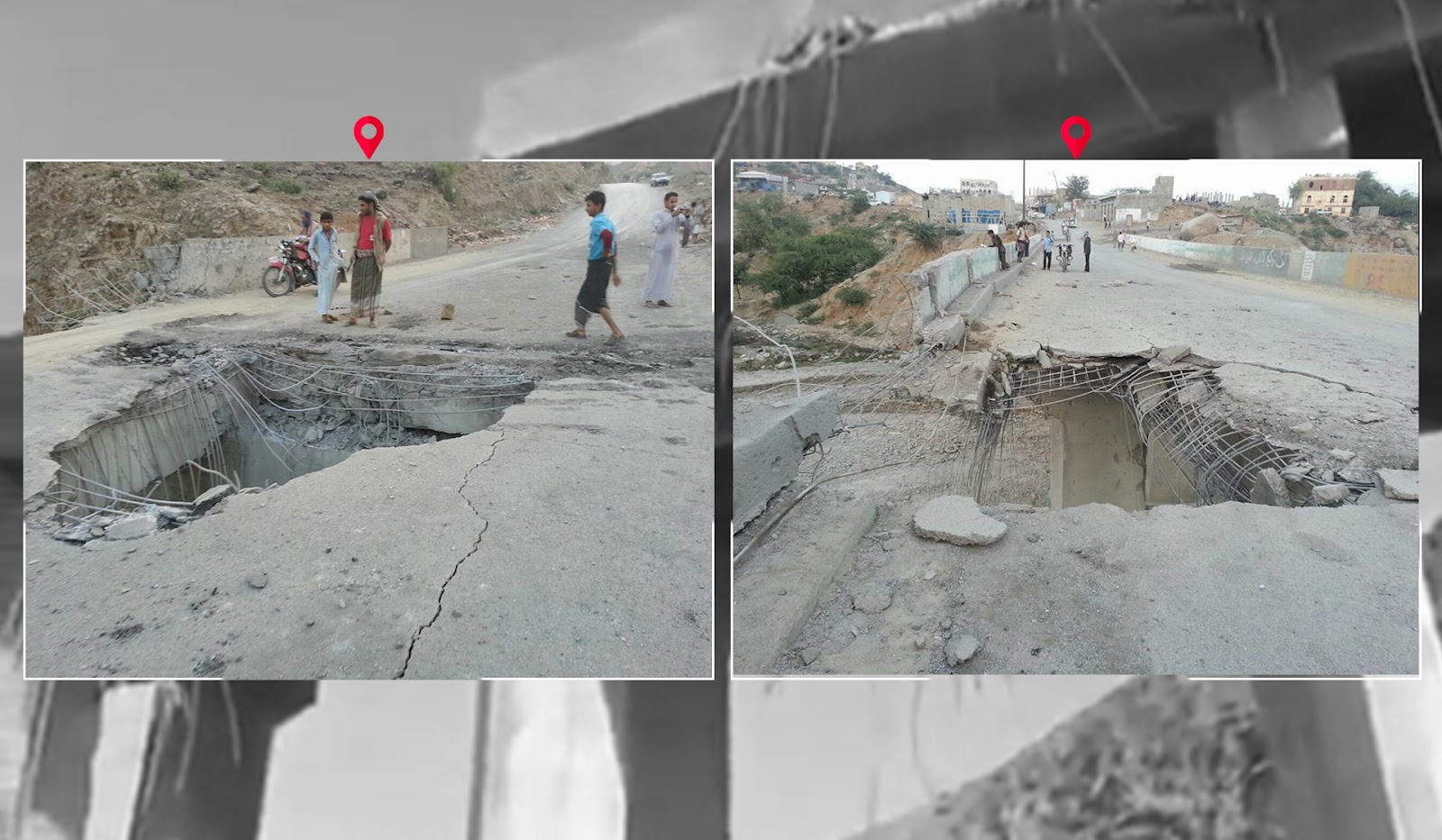 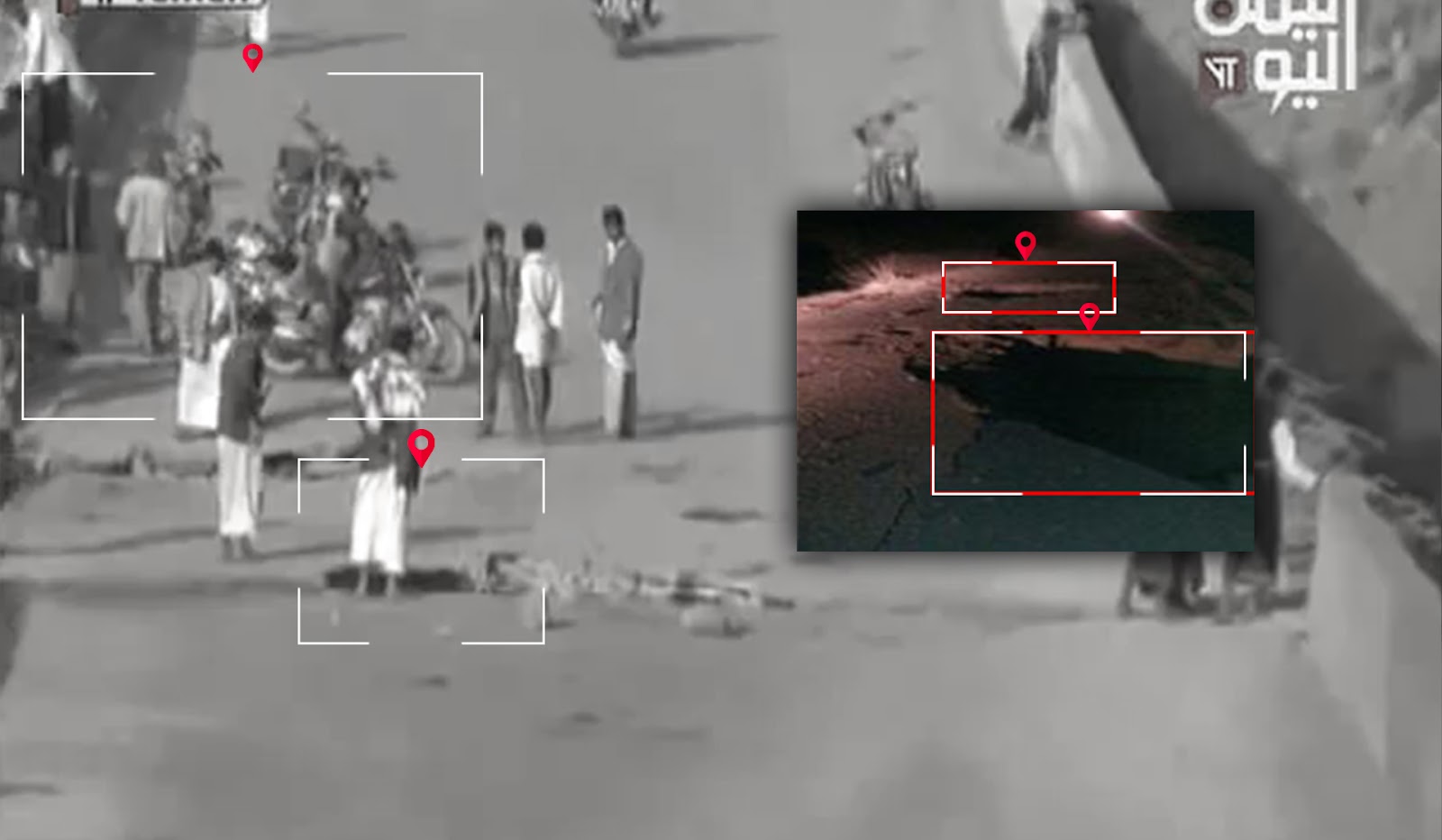 In a video from a TV report by Al-Masirah TV that is now deleted from YouTube, and was reposted by a local source on Facebook, a resident at minute 02:35 from the area says that the attack was at nine o’clock at night. This matches the post time of “Mohammed Audin’s” tweet alerting of an attack on the bridge. From these pieces of information, it is likely that the attack took place between 21:00 o’clock and 21:30 local time.

About 28 hours later, in the early hours of dawn on January 28, 2017, news claimed of another attack on the Khaifeh bridge destroying and collapsing parts of the bridge and further cutting off the road for civilians.

Posts on social media from local sources indicate a time difference that separates the air raids.. According to the time of the first post online mentioning the attack by “Morad Shali” on Twitter, the first raid occurred around 02:05 after midnight local time.

According to a tweet by ”Al-MasirahTV ,” the second raid that night,, happend at at 02:49 after midnight local time, 35 minutes after the first airstrike. A tweet by the account “Where is the explosion now?” additionally alerts on Twitter at 03:34 after midnight of a second air raid on the bridge.

A picture of the “Morad Shali” tweet about the first raid

The timing of the two raids were determined through the timestamps of the first posts alerting each raid and an interview with a local resident from a TV report by Al-Masirah TV that was published after the second attack. In the interview the resident says that the first raid was at 01:56 after midnight local time and the second raid was at 02:24 after midnight local time.

Through this information, Yemeni Archive can confirm that the first raid on the Khaifa Bridge in the Al-Aman area of the Hajjah governorate occurred between 01:50 and 02:05 after midnight local time, and the second raid occurred between 02:20 and 02:50 in the morning of January 28, 2017.

Media, including pictures from a TV report by Al-Mashahed.net, photos published by local source “Haitham Ali Al-Qini” on Facebook, Al-Masirah TV report, Al-Sahat channel report, show matching details of the bridge. Pictures and videos show the bridge destroyed and collapsed from the raids. 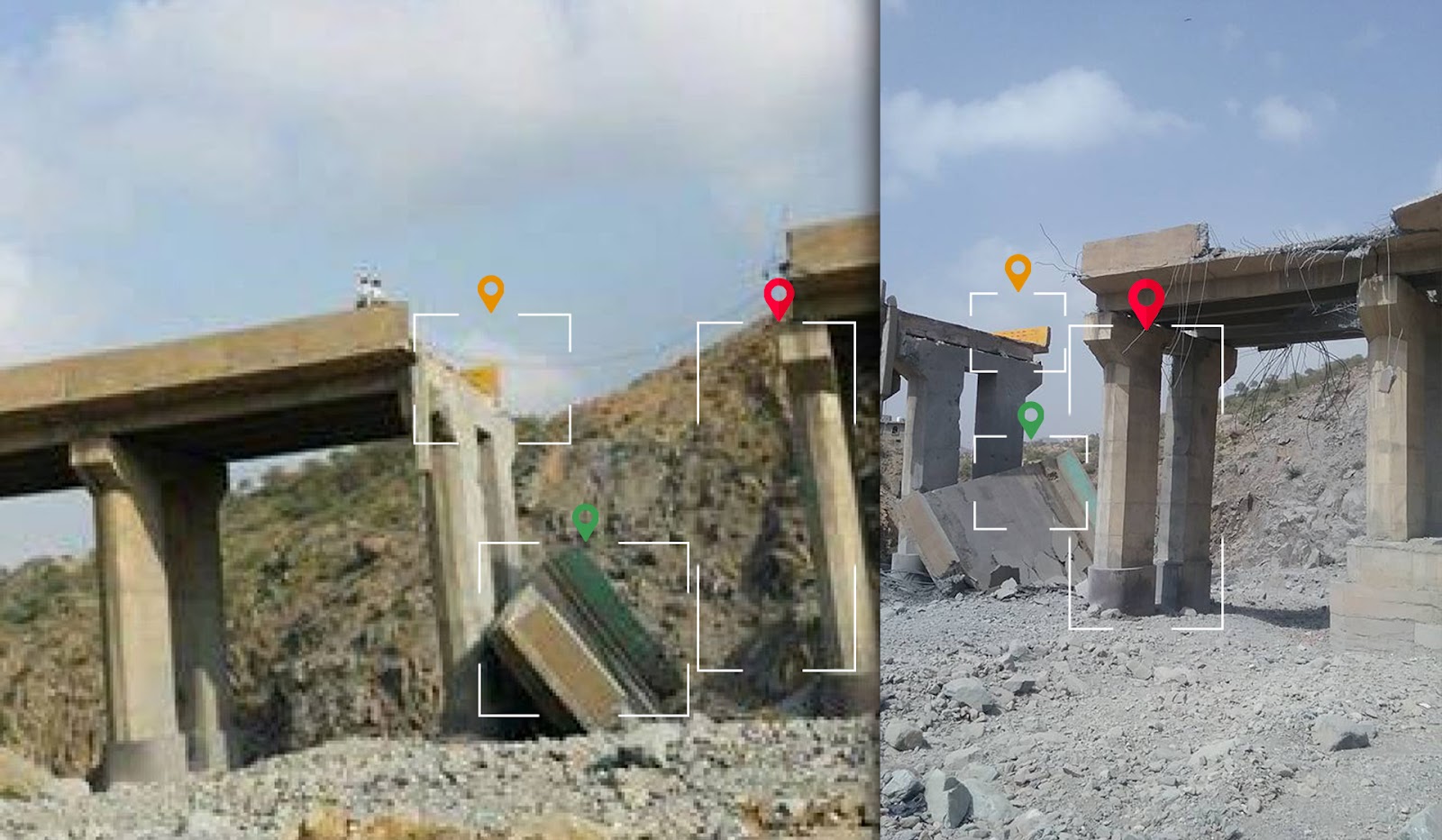 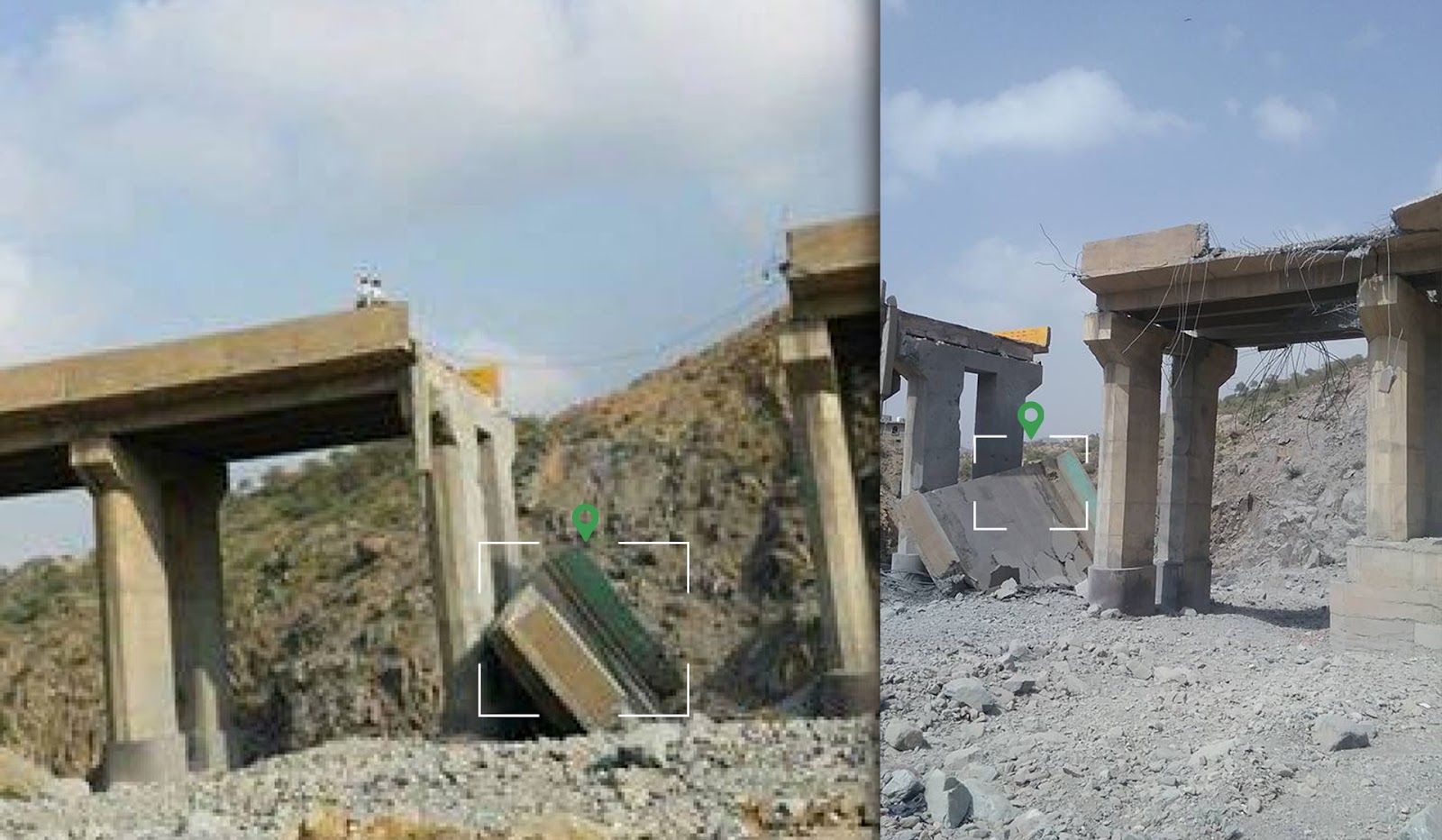 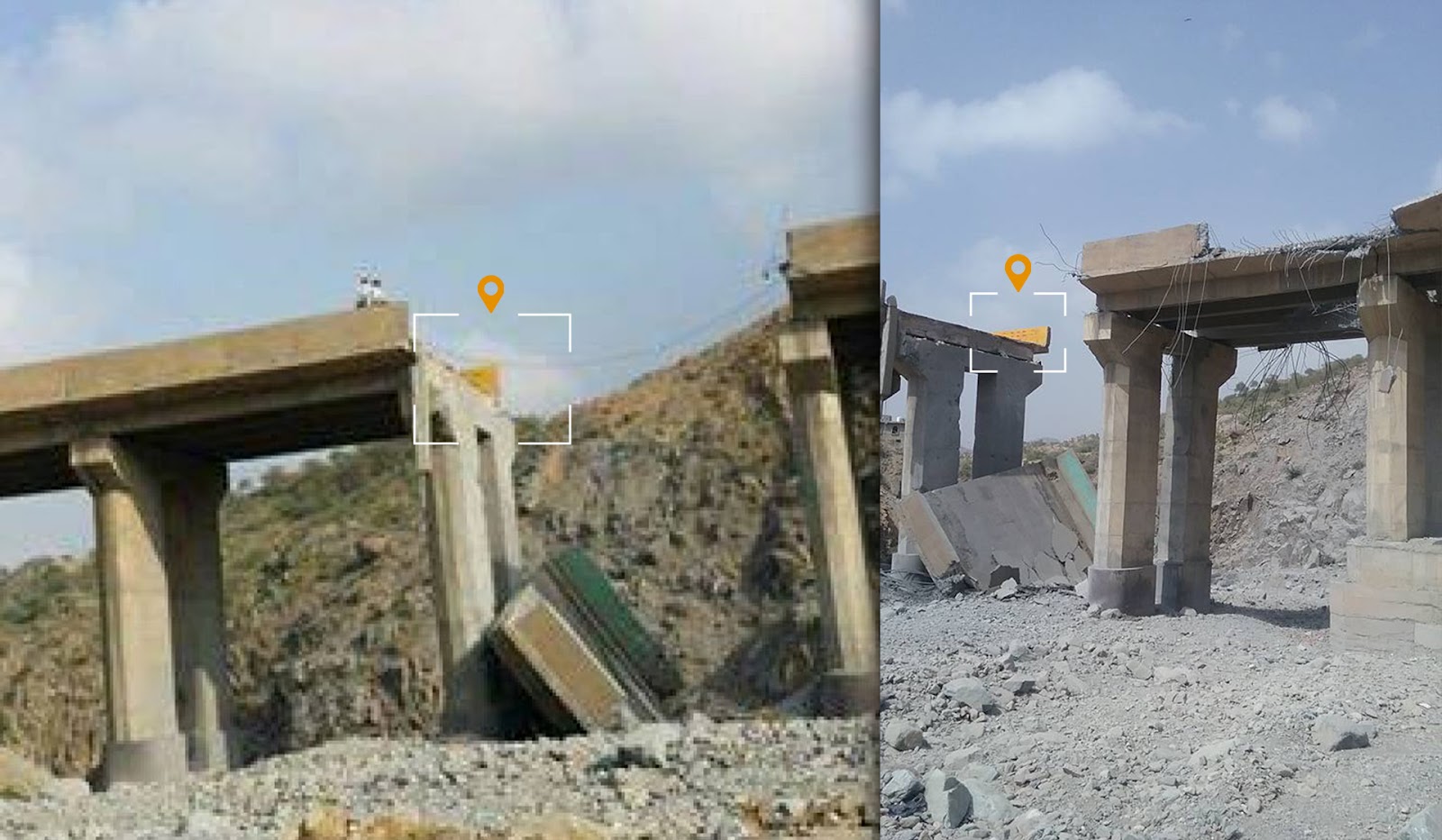 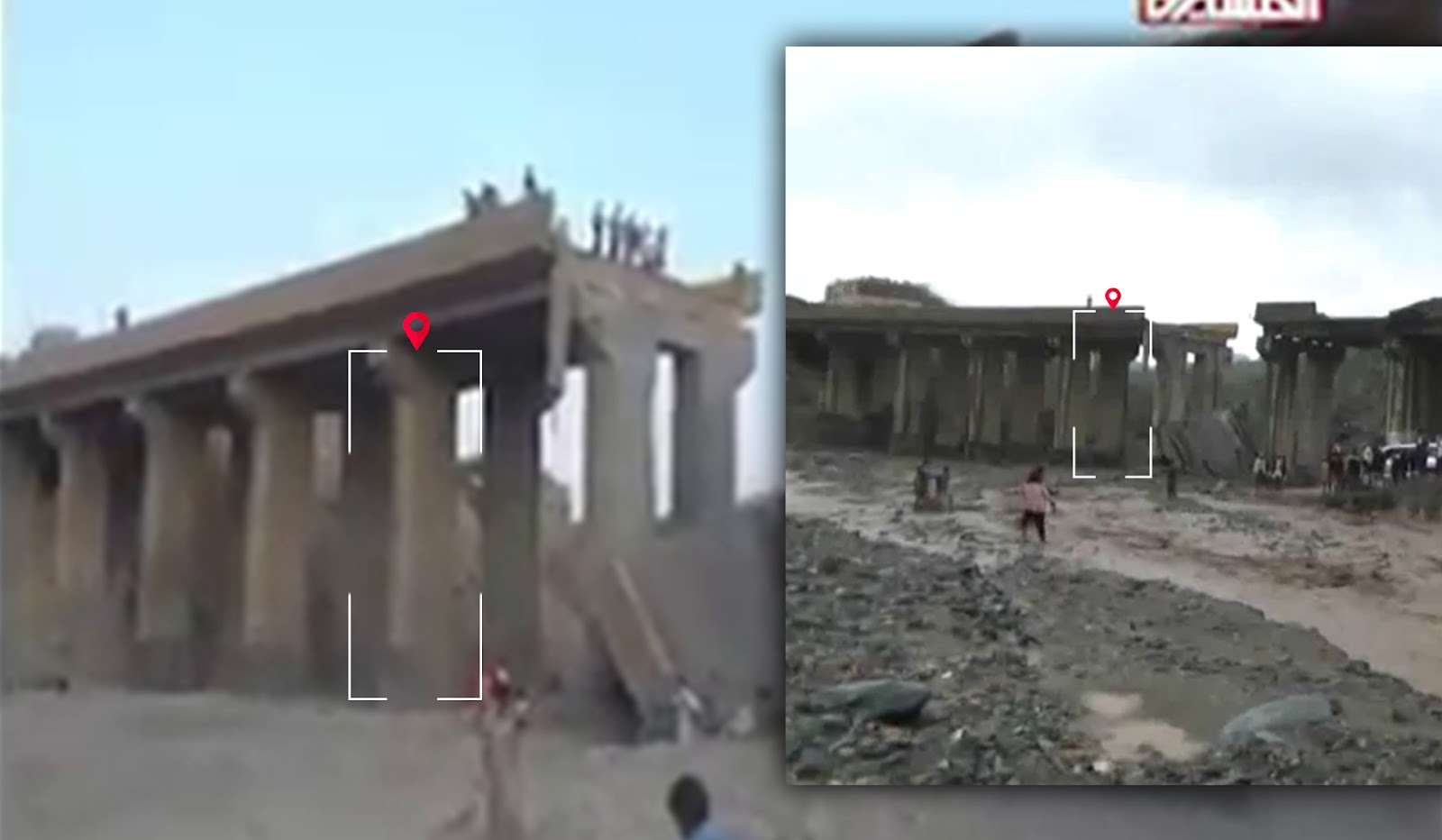 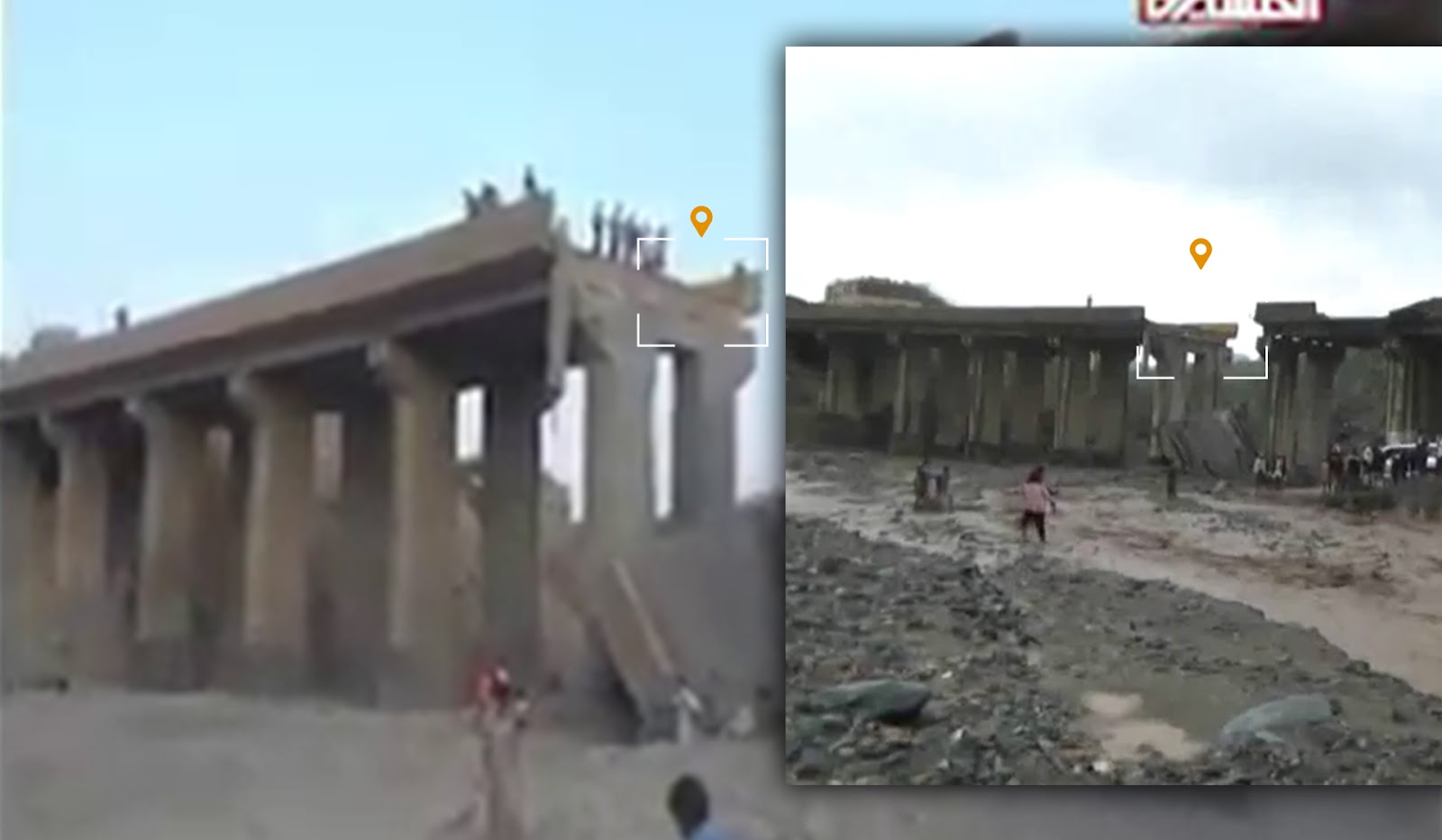 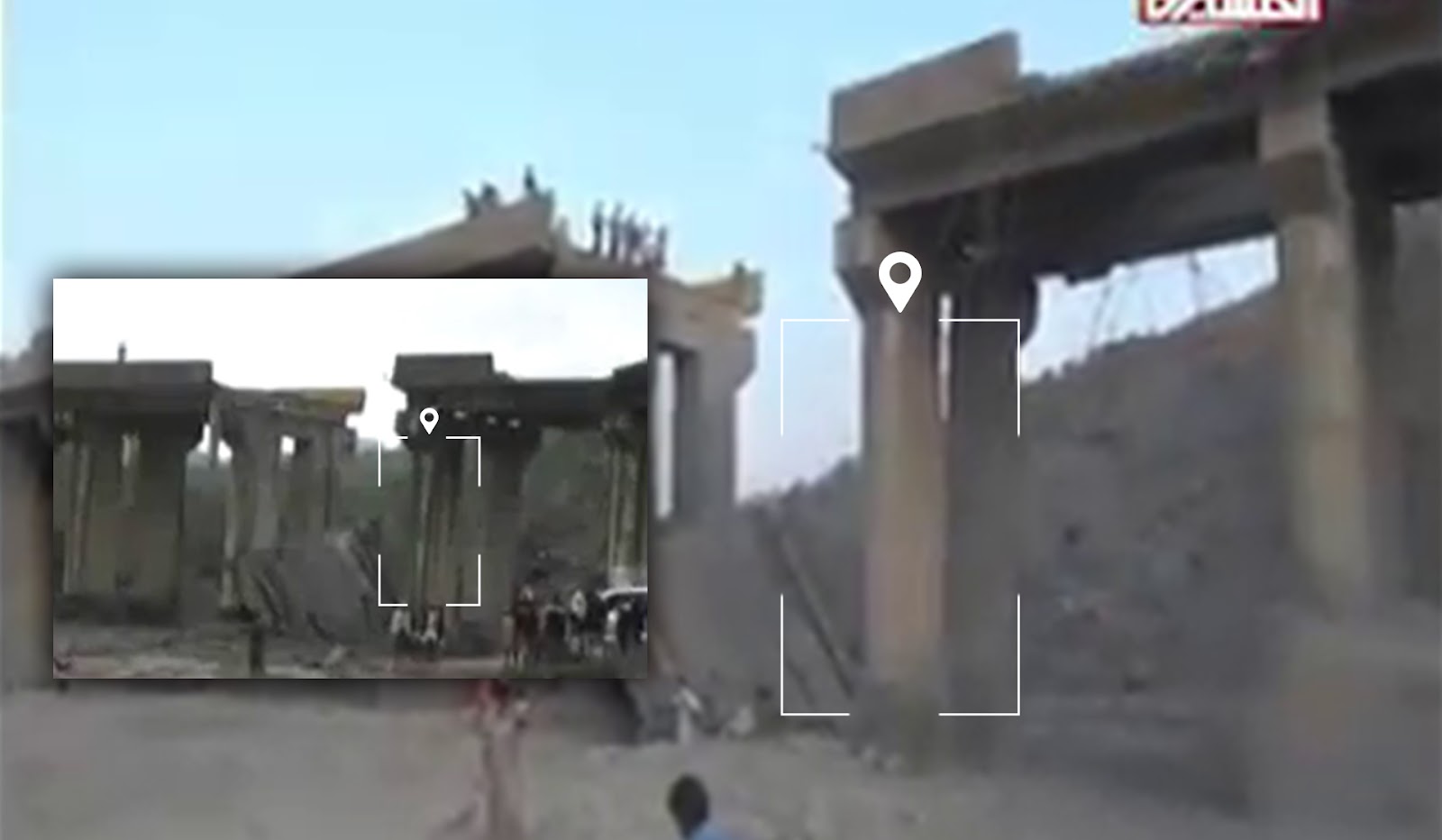 The exact location of the attack was determined by analyzing and matching the visual information and geographic landmarks shown in the videos and pictures of the two incidents with satellite imagery of the area. In several scenes compiled from four different sources, a distinctive three-story house can be seen on the right of the bridge with a few trees next to it as well as some buildings and empty spaces covered with trees in the opposite direction. These landmarks fully match with the satellite imagery from Google Earth at the coordinates: 15.673639 , 43.543278. 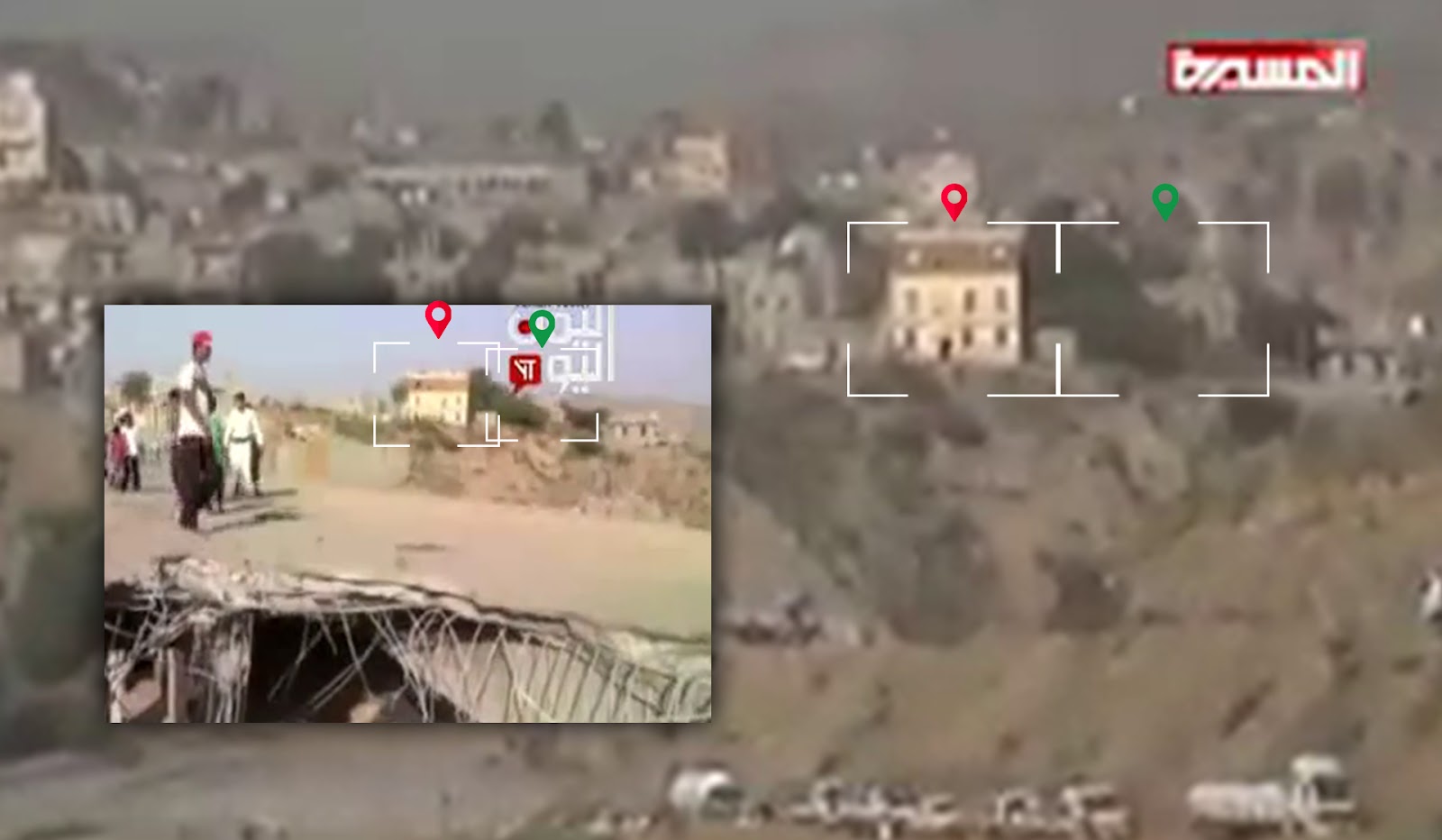 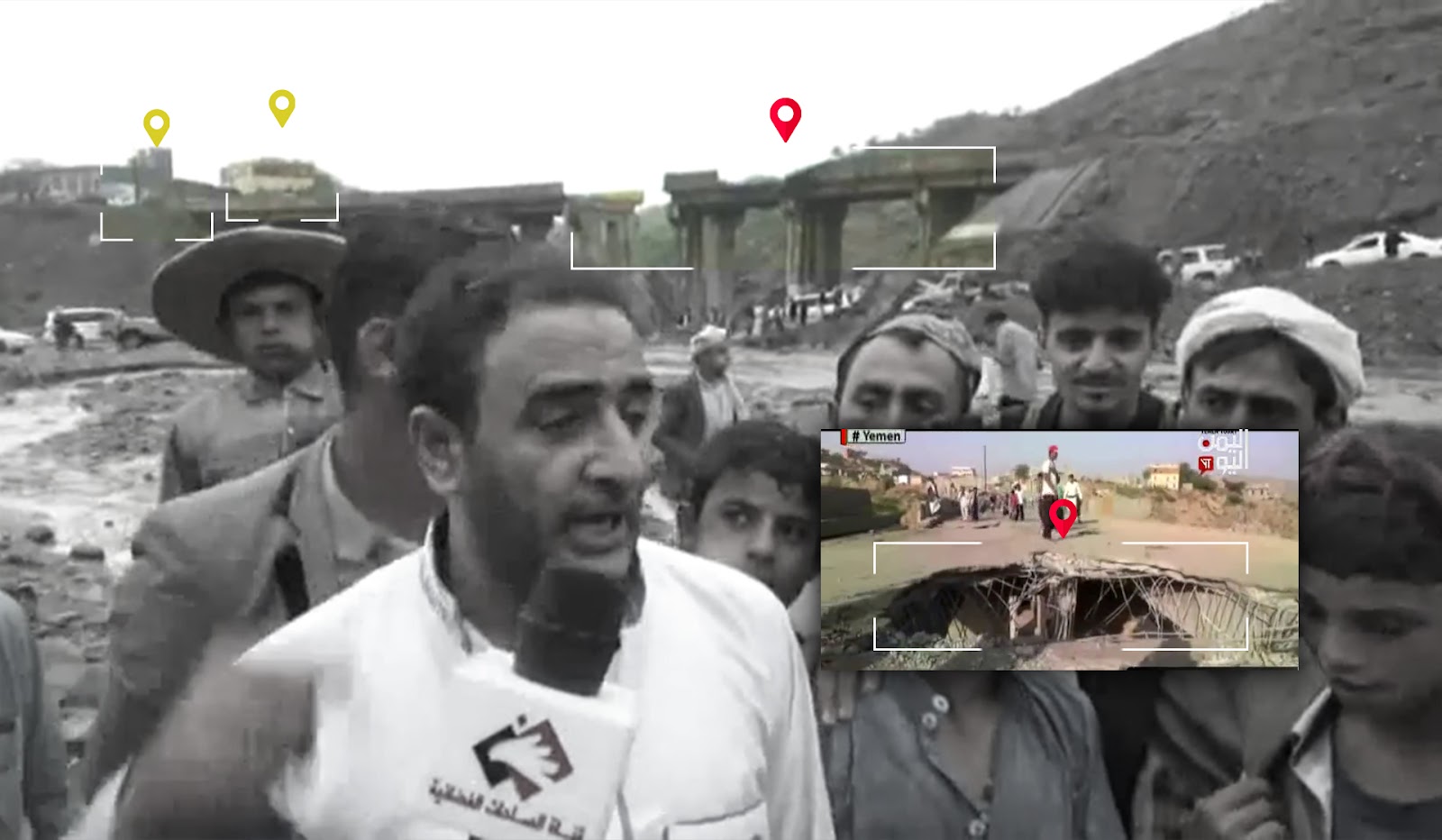 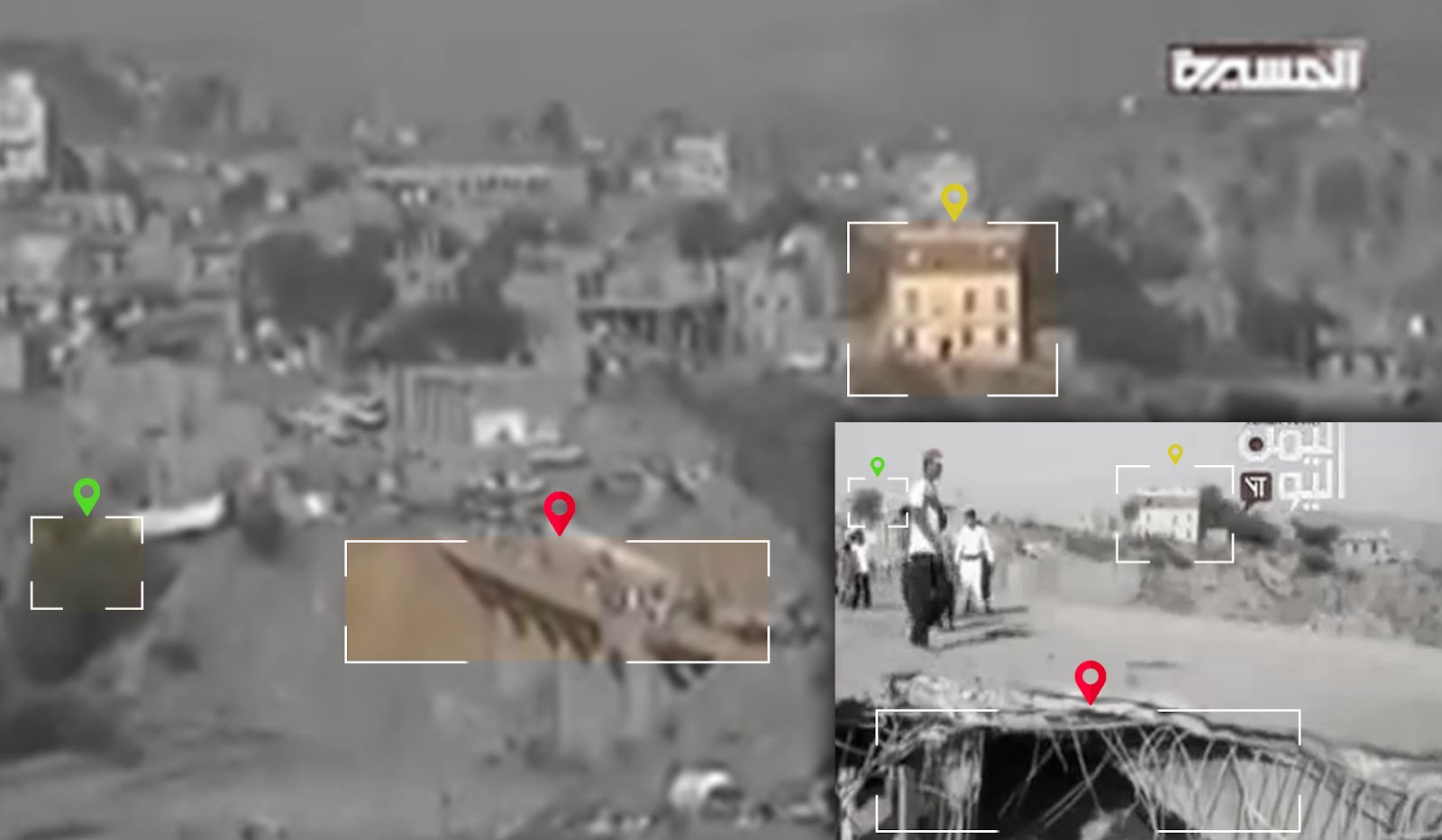 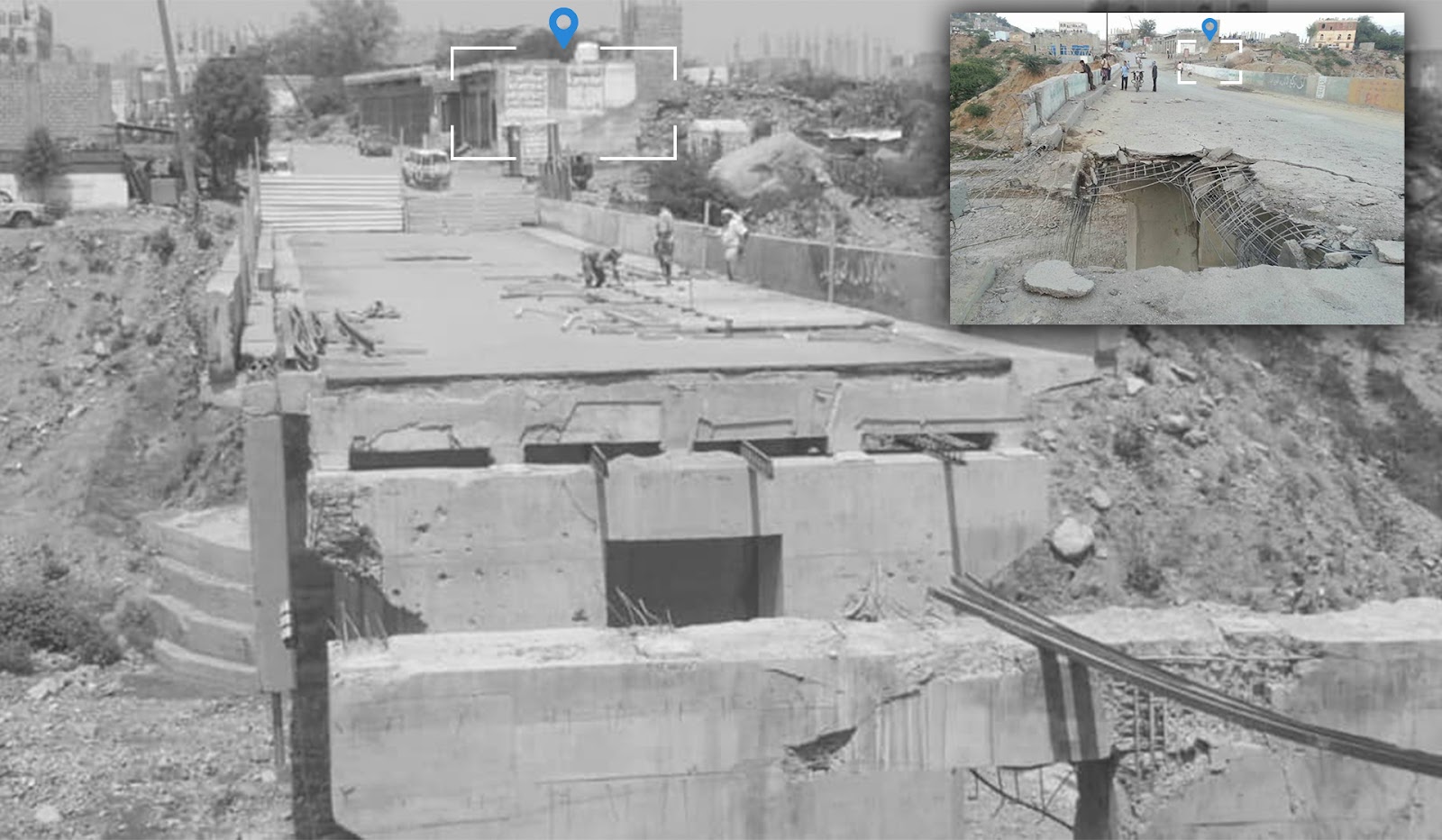 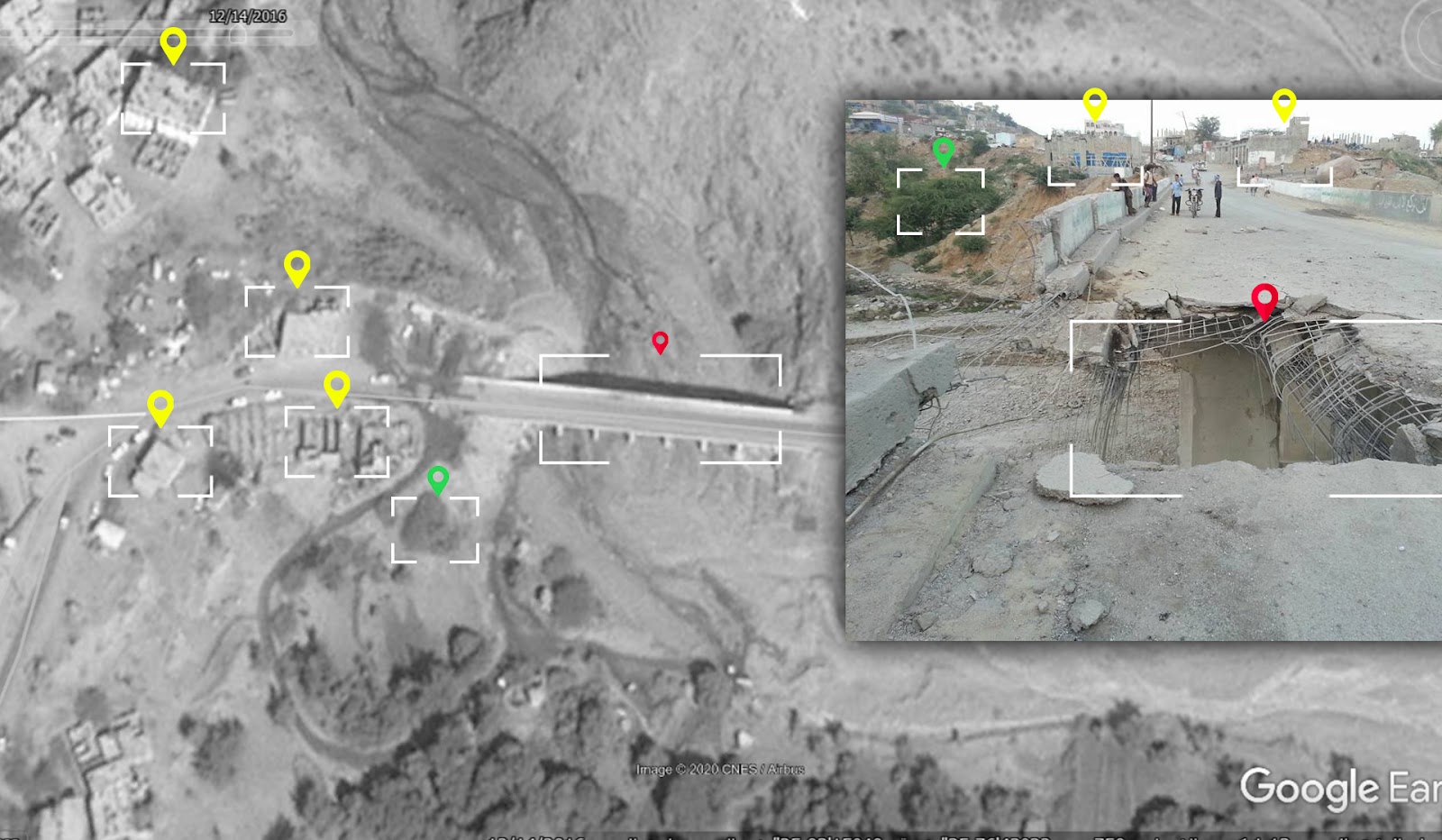 The picture at the top is from Source 4 “Yamanioun news site report” showing the building and other landmarks that matched in the previous photos. The picture at the bottom is a satellite image from Google Earth of the bridge and its surrounding landmarks.

In addition to the building and trees, a video from a TV report by Al-Sahat TV shows a hill and trees located beside a creek in the valley. These geographic features match the terrain view satellite imagery provided by Google Earth. 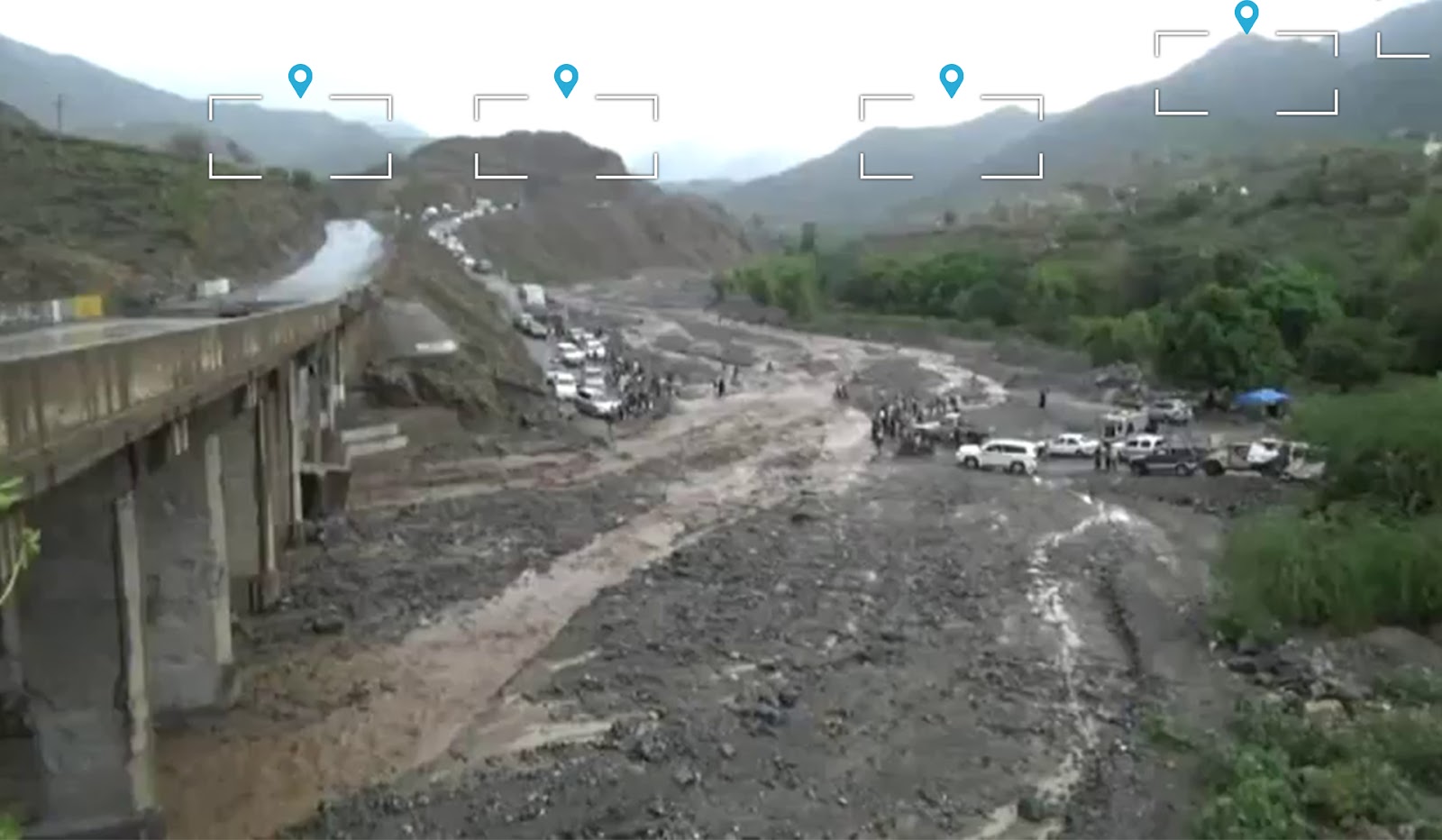 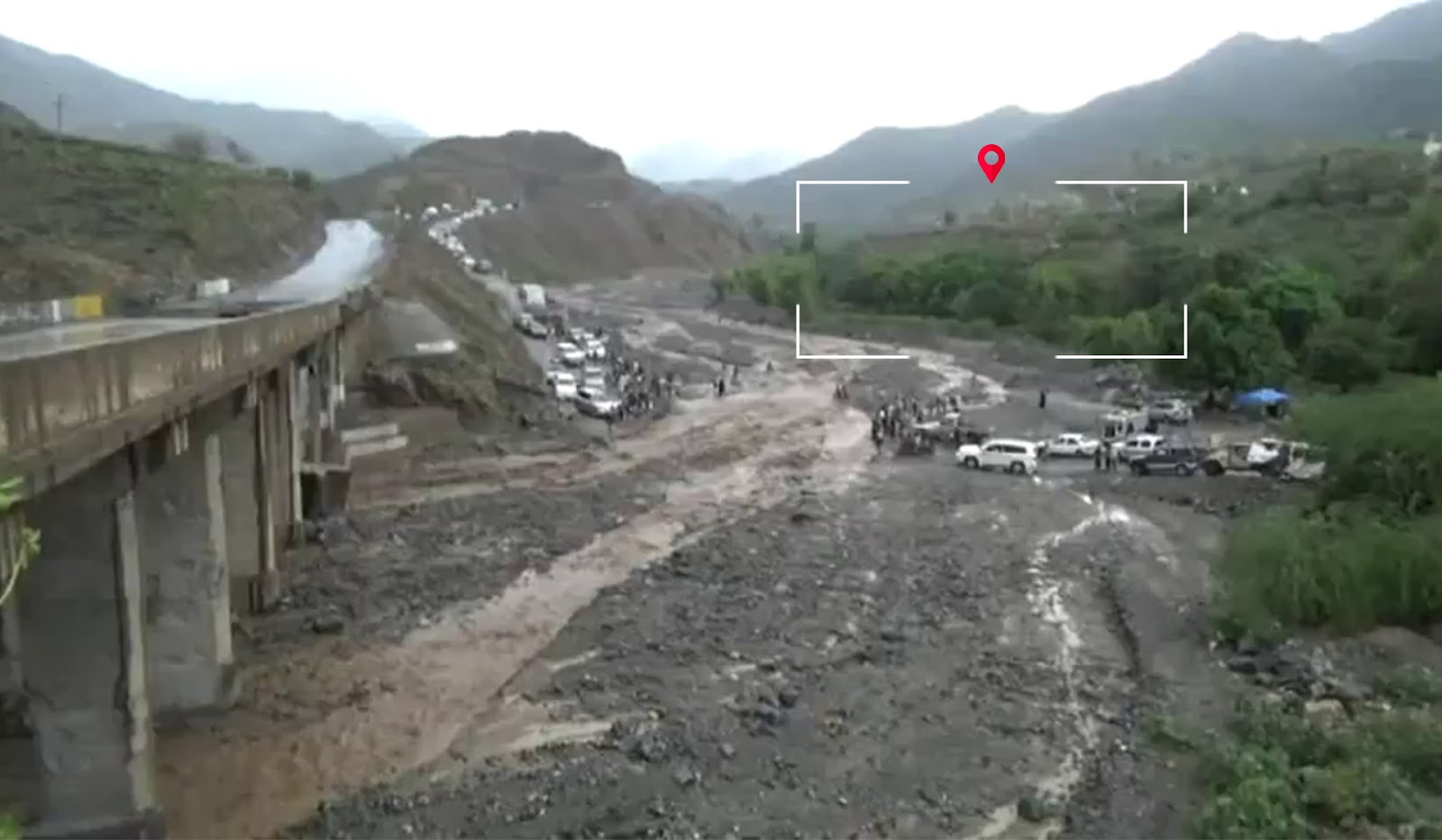 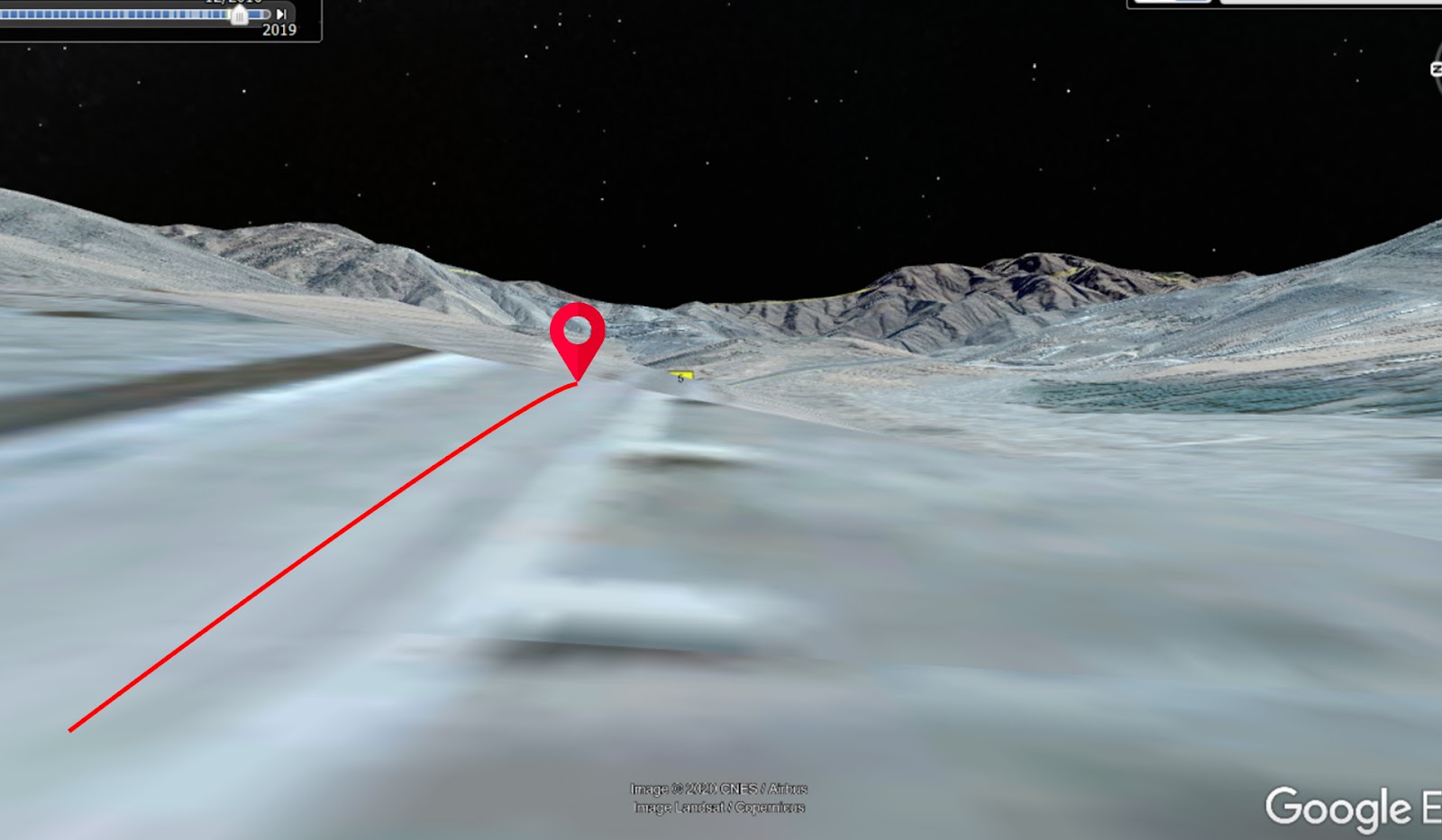 A screenshot from the video showing the hills and trees on the other side of the bridge with satellite imagery from Google Earth showing the terrain of the location.

Yemeni Archive was unable to find remnants of the munitions used in the attack on the bridge. However, the size of the crater from the first attack and the extent of damage to the bridge from the first and second attacks indicate that Saudi-led coalition warplanes are likely responsible for the attacks. Moreover, as mentioned by local reports, the systematic and repeated operations by the Saudi-led coalition of targeting bridges to cut off supply lines of the Ansar Allah movement further indicates that the multinational alliance as a party potentially responsible for these airstrikes. 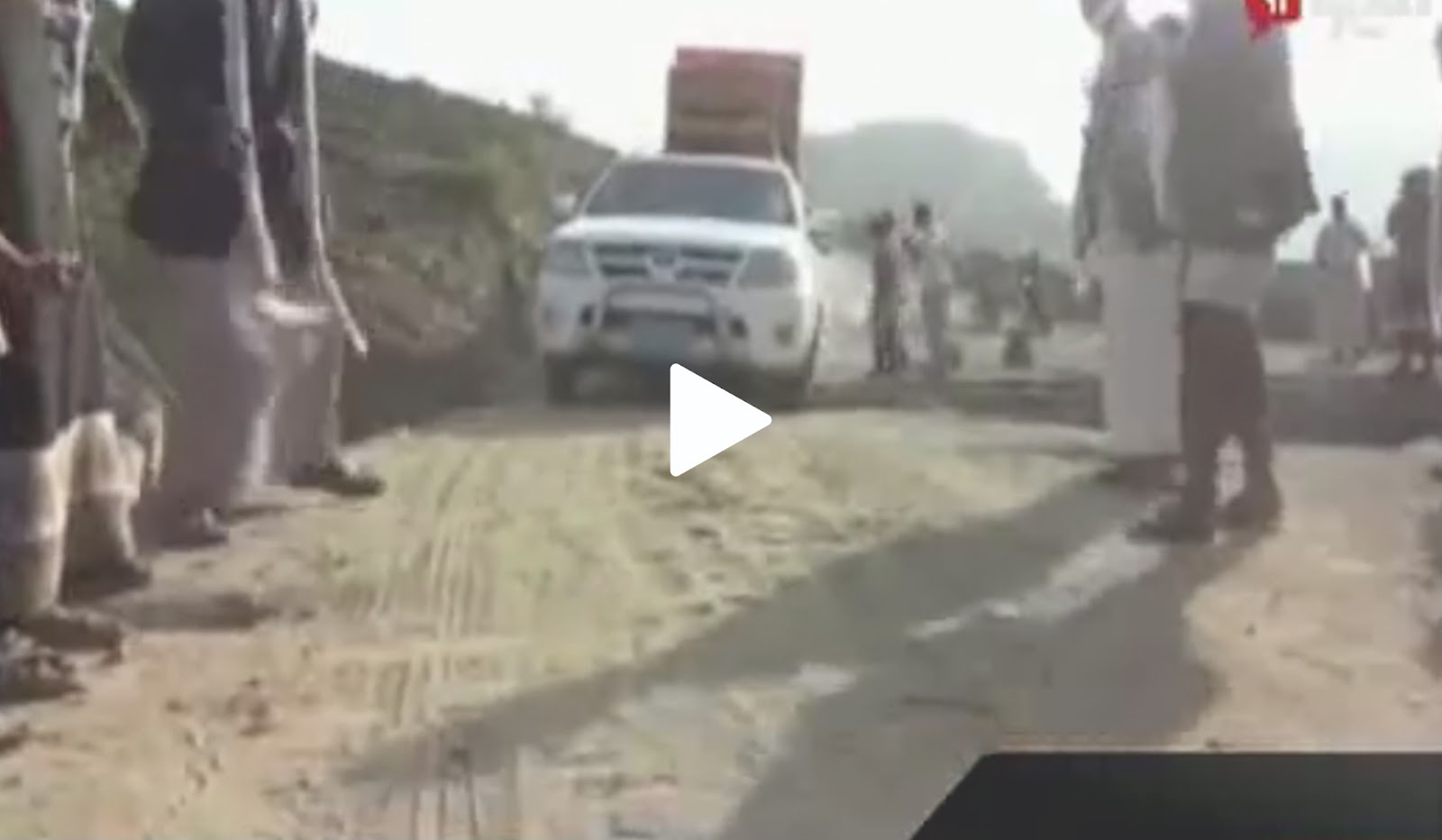 A screenshot from the Yemen today TV report, taken after the first targeting. 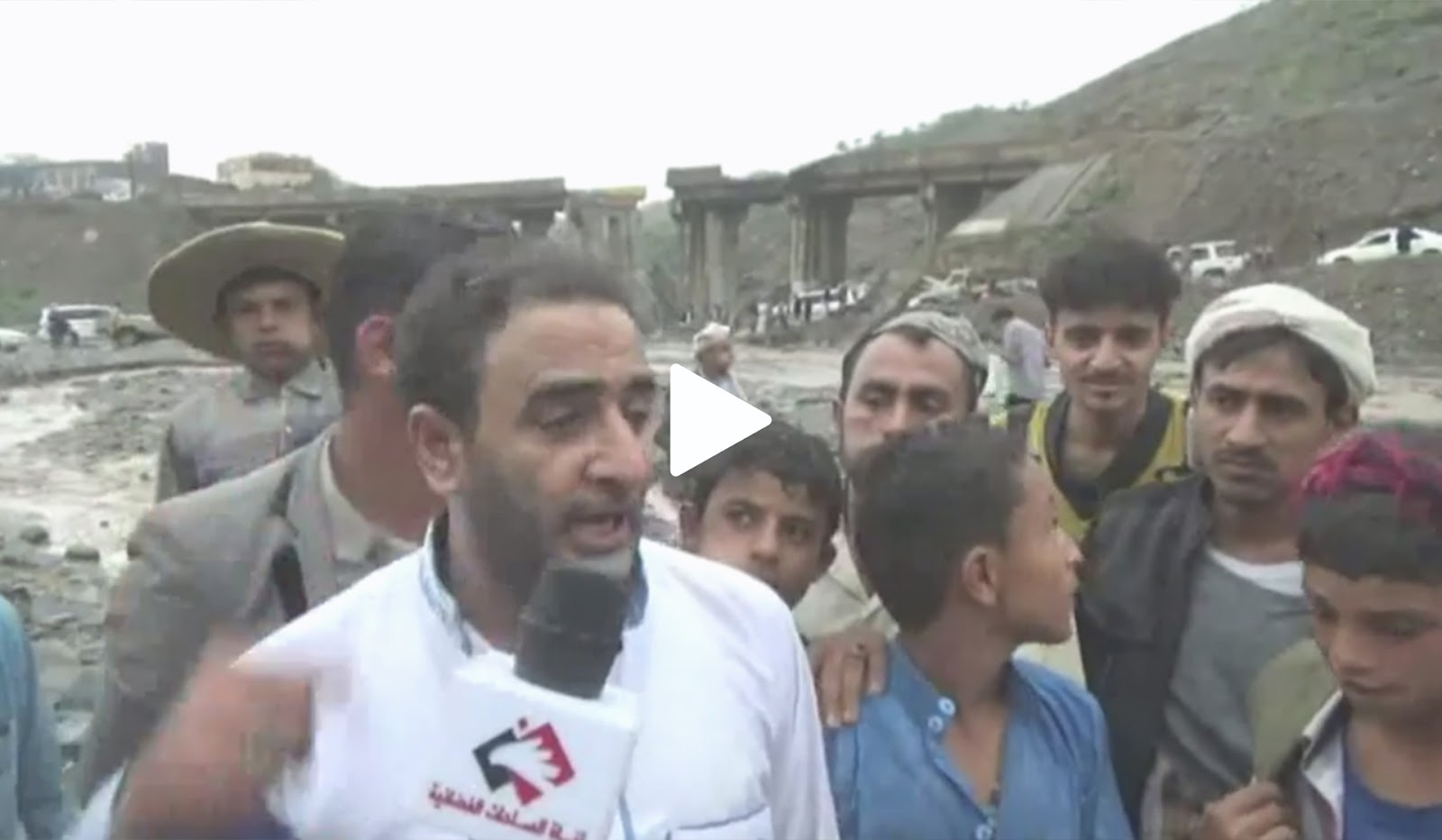 A Screenshot from the Al-Sahat TV report after the second targeting. 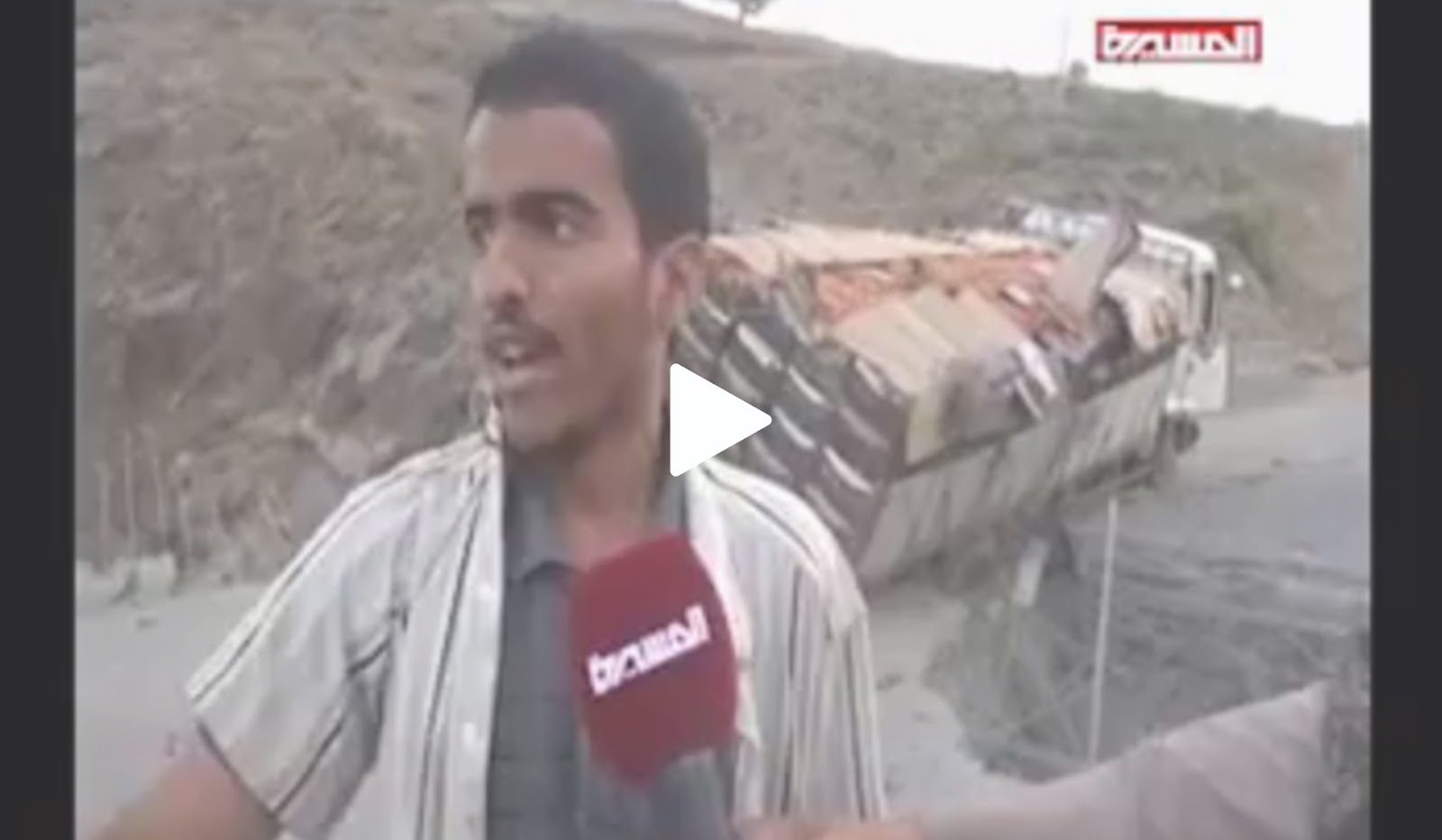 In the following comparison, archived satellite images from Google Earth show the destruction of the Khaifa Bridge in Al-Aman area in the Hajjah governorate after the two attacks. Based on the open source videos and images showing the damage, the following 3D graphics illustrate the damage caused by the bombings of the first and second targeting.

Posts online and gathered by the Yemeni Archive offer similar reports for the number of those killed in the attacks on the bridge. After the first attack, on January 26, 2017, Nabaa news published a tweet claiming that three people were killed and two were injured from the attack.The “Crimes of Decisive Storm on the People of Yemen” Facebook page additionally posted reporting of three killed and two injured by the airstrike. The Facebook page “Where is the explosion now?” also posted claiming that three people were killed and a number of people were injured in the attack. For the second air raid, on January 28, 2017, no casualties were reported except for a statement by a citizen featured in the Al-Masirah TV report who mentioned that the truck driver on the bridge during the second attack was injured by the blast.