An investigation reveals the shelling targeted a street near a wedding hall gate in Al-Hudaydah city, on Jan 1, 2021

On the night of January 1, 2021, and two days after the attack on the Aden International Airport on December 30, 2020, a mortar shell fell on the gate of a wedding hall in the Al-Hawk District in south Al-Hudaydah governorate during a wedding party with dozens of women and children. The attack killed three civilians and injured seven others, all who were waiting on the street outside the wedding hall for their families to leave the reception.

The attack targeted a residential area—relatively far from any front lines—crowded with civilians. Yemeni Archive gathered open source information related to the attack. Yemeni Archive, verified, analysed and confirmed this information in order to find out the possible perpetrator responsible for the attack.

Background on the area:

The Al-Mansour Wedding Hall Complex is located on Airport Street—approximately 3 km from the Al-Hudaydah International Airport—in the Al-Hawk District, one of the three main districts of Al-Hudaydah city. Al-Hudaydah City, the capital of the governorate, overlooks the Red Sea coast of western Yemen.

The Al-Hudaydah governorate is an important and strategic governorate politically and militarily for the two parties to the conflict in Yemen. It is one of the most important entry points for basic needs such as food, medicine, and oil derivatives as well as humanitarian aid bought by international organizations to Yemen. Goods move through the Al-Hudaydah port and towards the northern Yemeni regions, which are under Houthis control.

The Houthis have used the Al-Hudaydah governorate, and the western coast in general, since 2015 to smuggle weapons as well as carry out naval attacks using decoy boats against Saud-led coalition warships besieging the coast.

In the last 3 months of 2018, joint forces—supported by the Saudi-led coalition—led a military advance on the western coast reaching the center of the Al-Hudaydah governorate. Forces sought to control the governorate removing Houthi forces from the area. This occurred before battles on the outskirts of the city stopped after the signing of the Stockholm Agreement. The two parties to the conflict agreed on a cease fire, preventing any military progress.

On January 1, 2021, only two days after the targeting of Aden International Airport, a mortar shell landed near the gate of a wedding hall in the Al-Hawk district, south of Al-Hudaydah city, killing and wounding civilians.

Social media platforms and news sites circulated reports of the shelling. Parties to the conflict in the Al-Hudaydah governorate were quick to accuse and hold each other responsible for the attack. The Yemeni news agency Saba published a news report accusing the joint forces on the western coast (calling them mercenaries of the aggression) of the shelling. While the “Alweyaat Al-Amaliqa Media Center” (a military faction belonging to the joint forces on the western coast) accused the Houthis of bombing the wedding hall.

A picture from the Yemeni news agency Saba News

Determining the timing of the attack

To verify the moment the attack occurred, Yemeni Archive analyzed the timing of posts (using the Timestamp tool) mentioning the attack.

The first news alerting of the incident was a tweet by the local source “Rashid Maarouf” on Twitter. Rashid Maarouf tweeted about the bombing of the wedding Hall at exactly 22:27 local time. After examining the timestamp of this tweet, using the TimestampConvert tool, Yemeni Archive was able to identify that the incident likely occurred between 22:20 – 22:27 Yemeni local time.

A picture of Rashid Maarouf’s tweet about the incident

The incident was documented with several photos and videos posted at different times. The visual content shows the impact of the bombing at the targeted location. They contain visual evidence that helps in the identification of the incident’s location as well as the exact location where the shell fell.

After analyzing the visual information shown in videos posted by RUPTLY, Independent Arabia, Arab TV, and France Press in Arabic, Yemeni Archive identified the shell as falling near the gate of the Al-Mansour wedding hall complex. 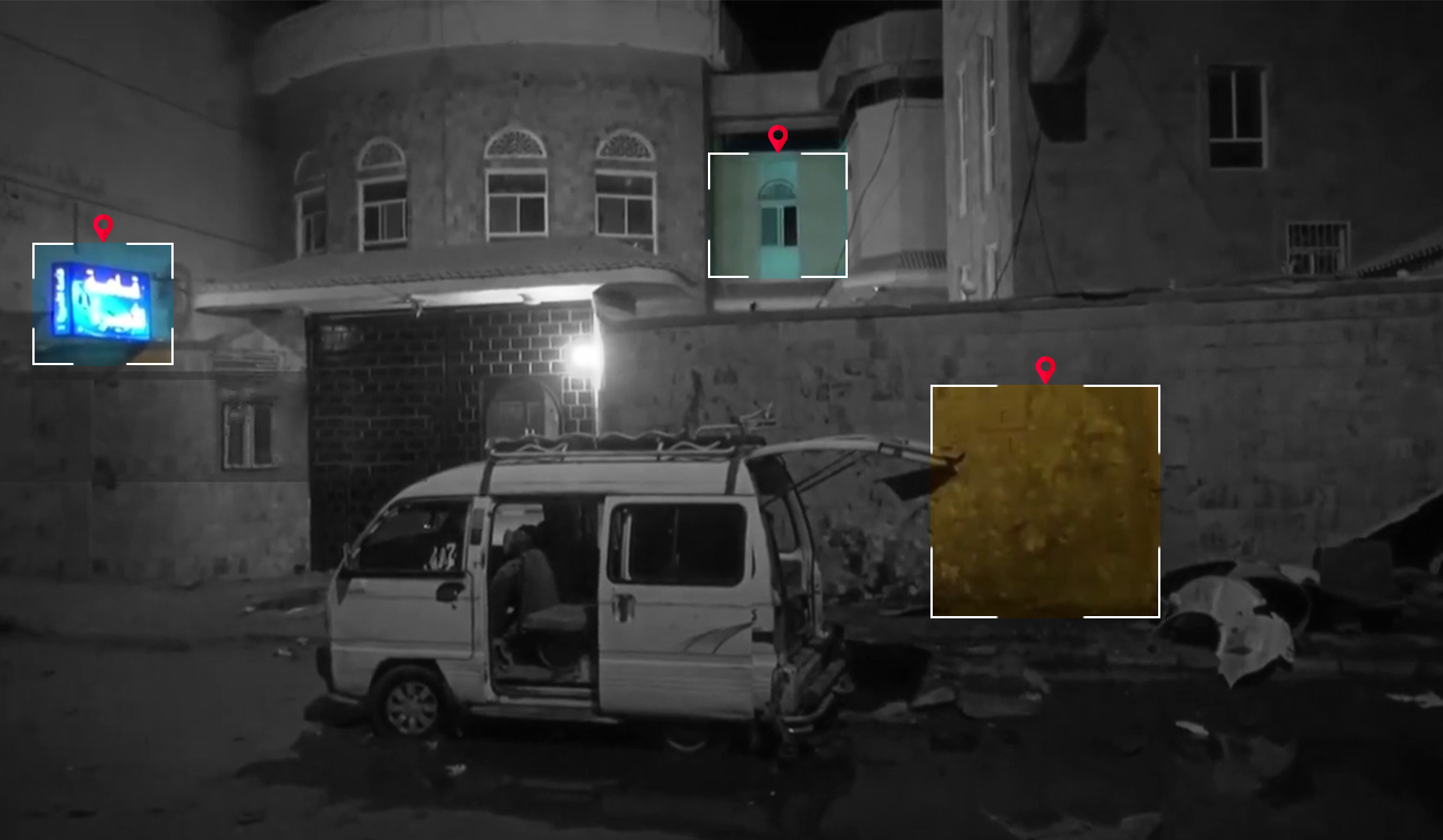 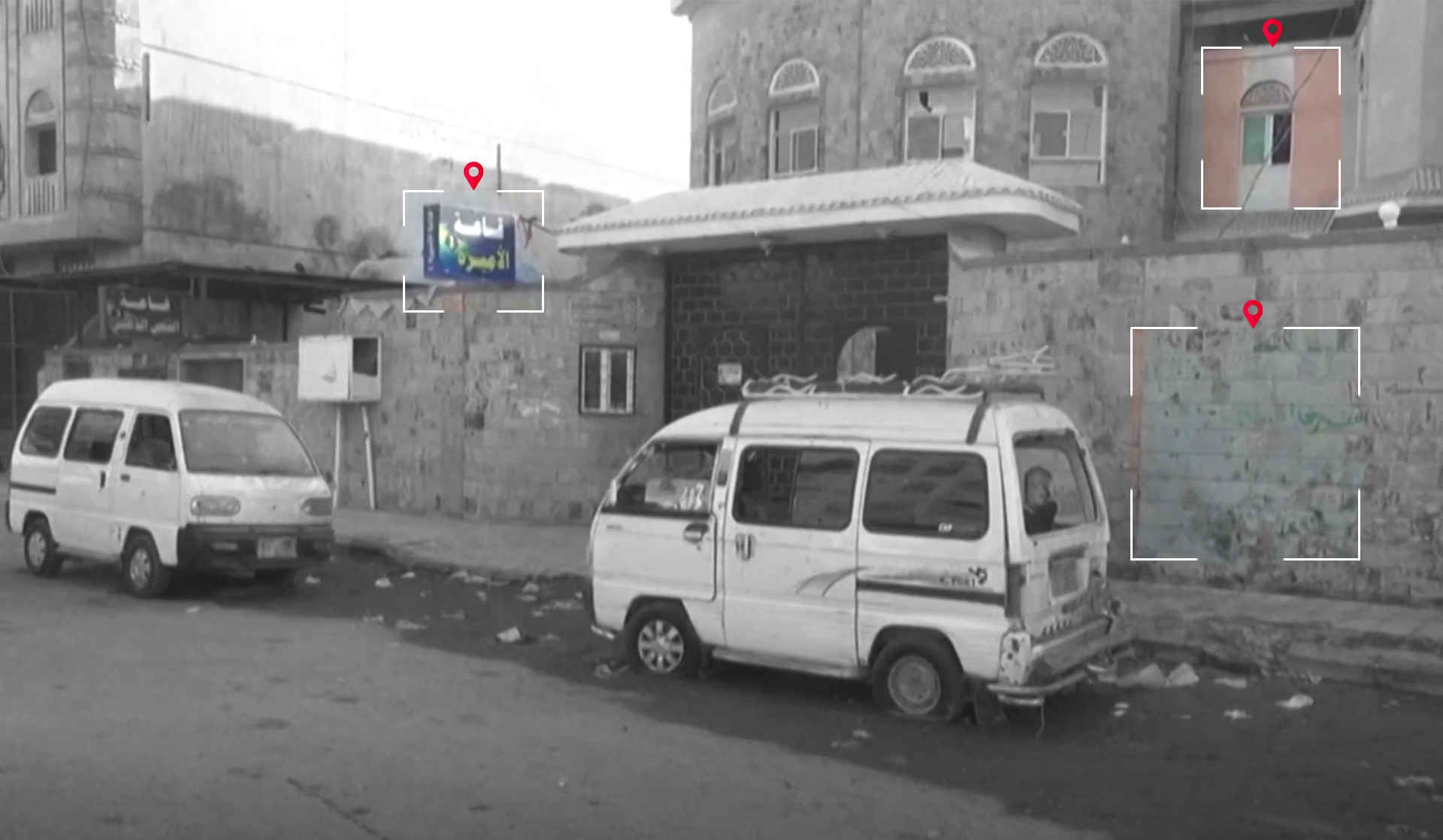 A screenshot taken from an Arab TV report

When searching, Google Maps shows a potential location for the wedding hall at the coordinates 14.785944, 42.967631. After analyzing the landmarks surrounding the building shown in open source content and comparing them with satellite imagery, Yemeni Archive was able to confirm these coordinates. 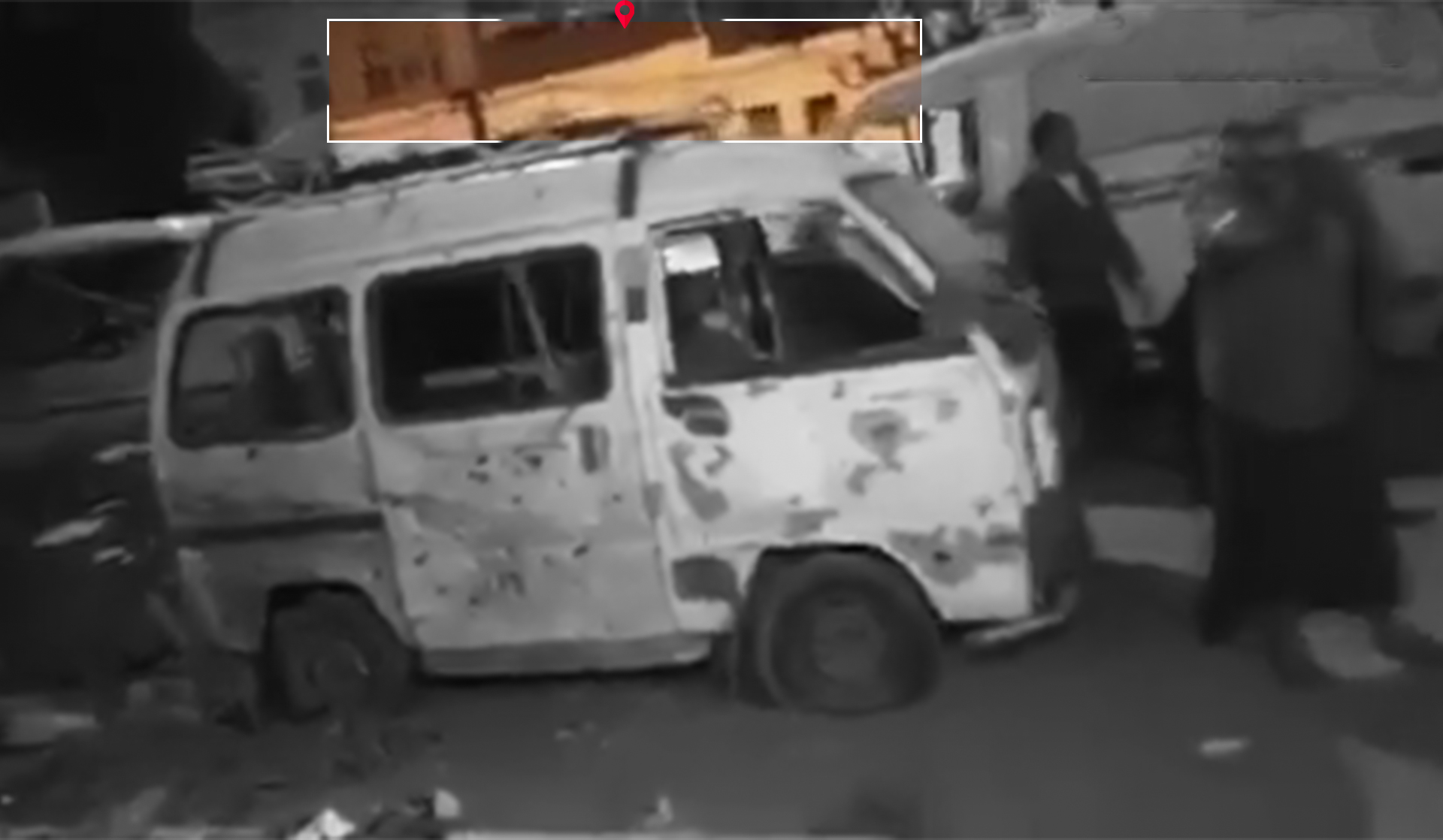 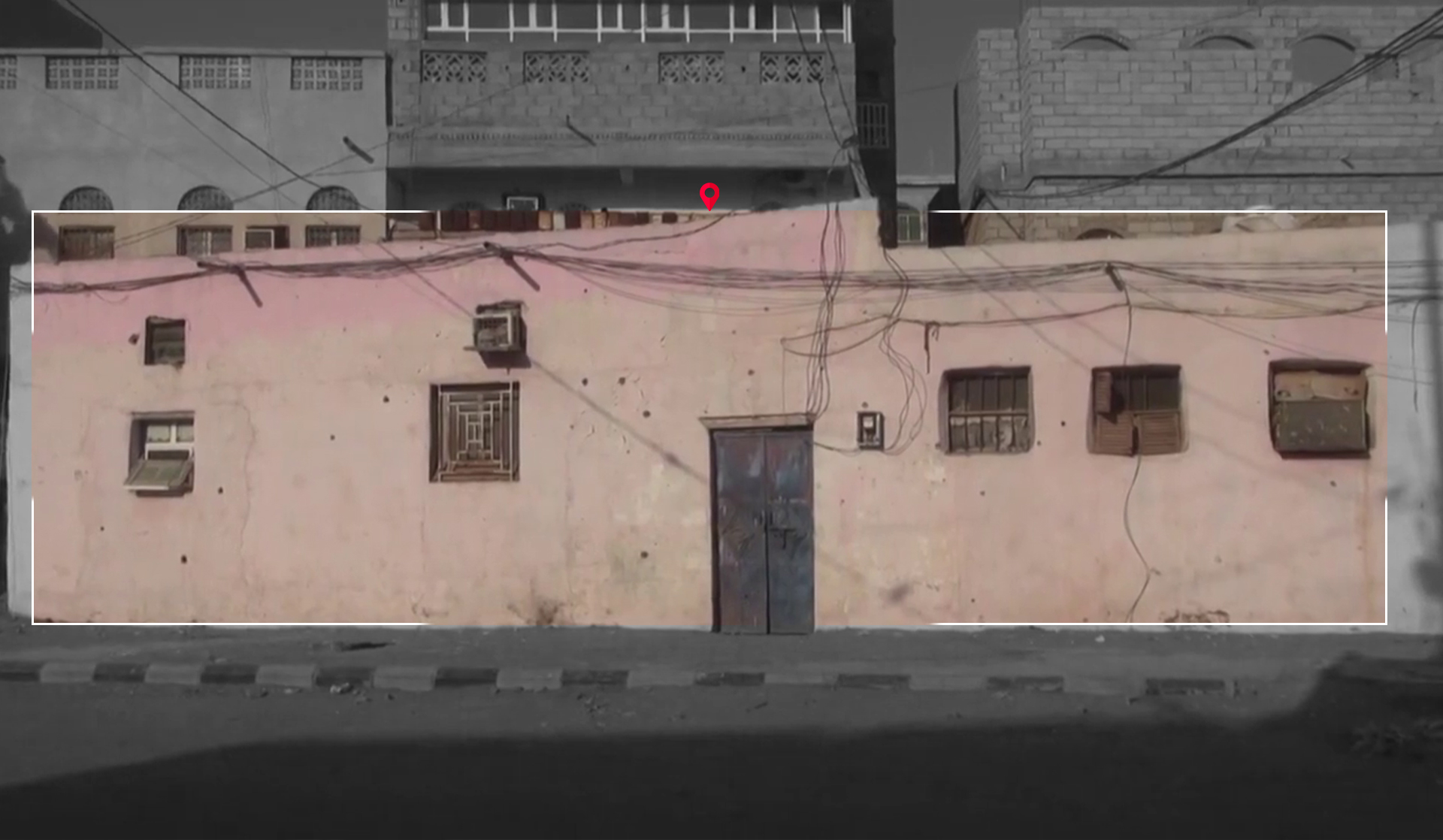 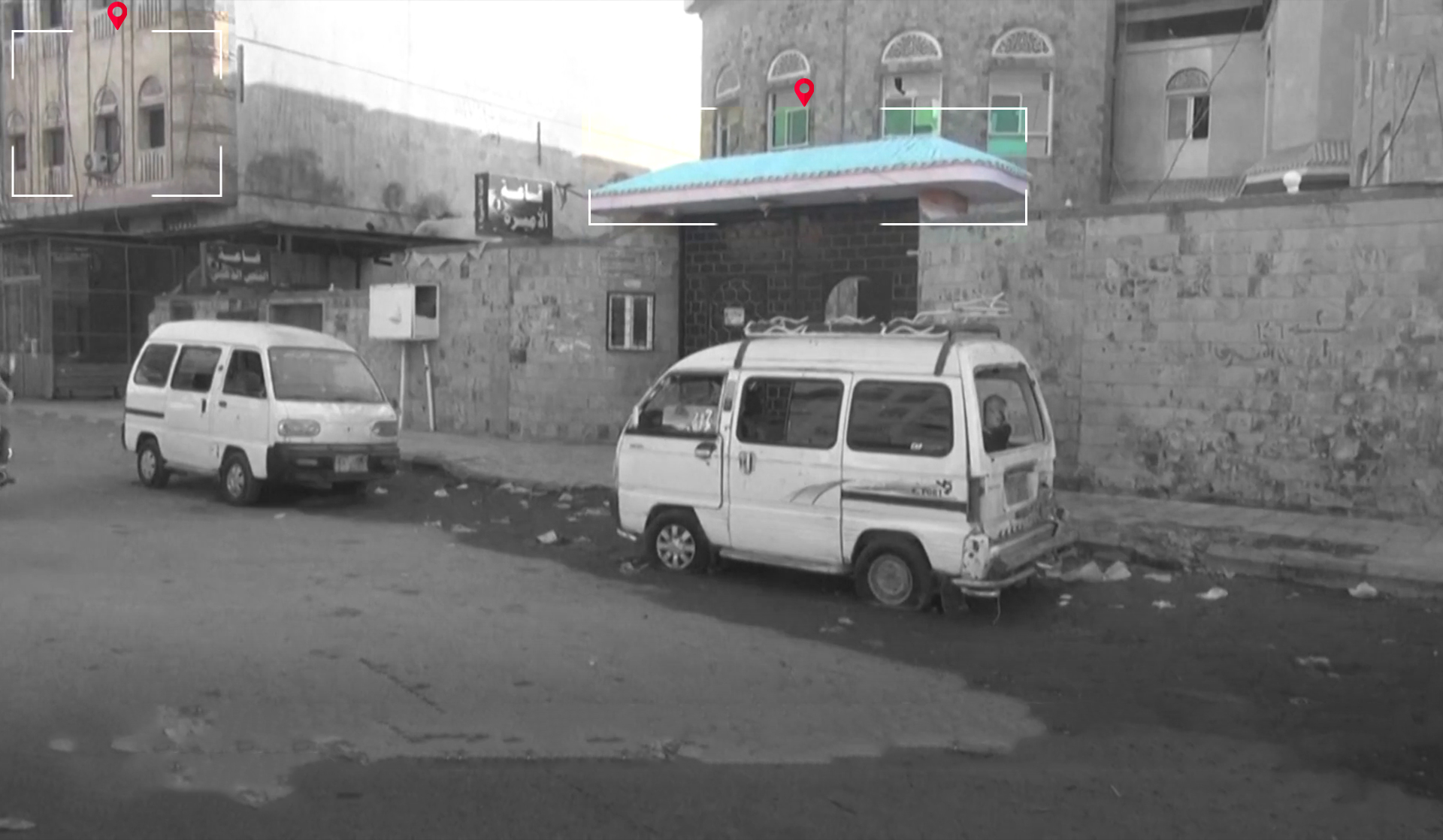 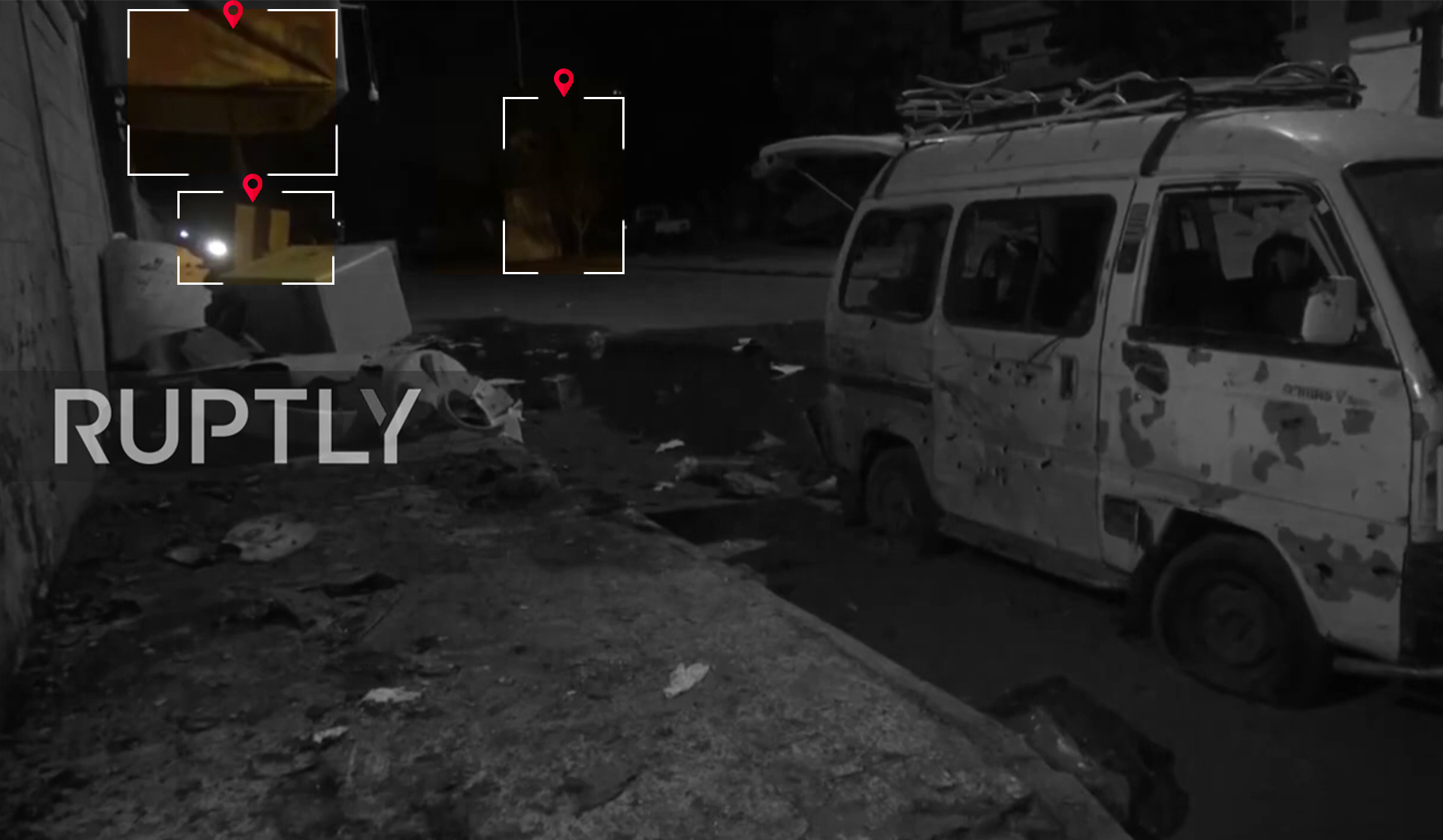 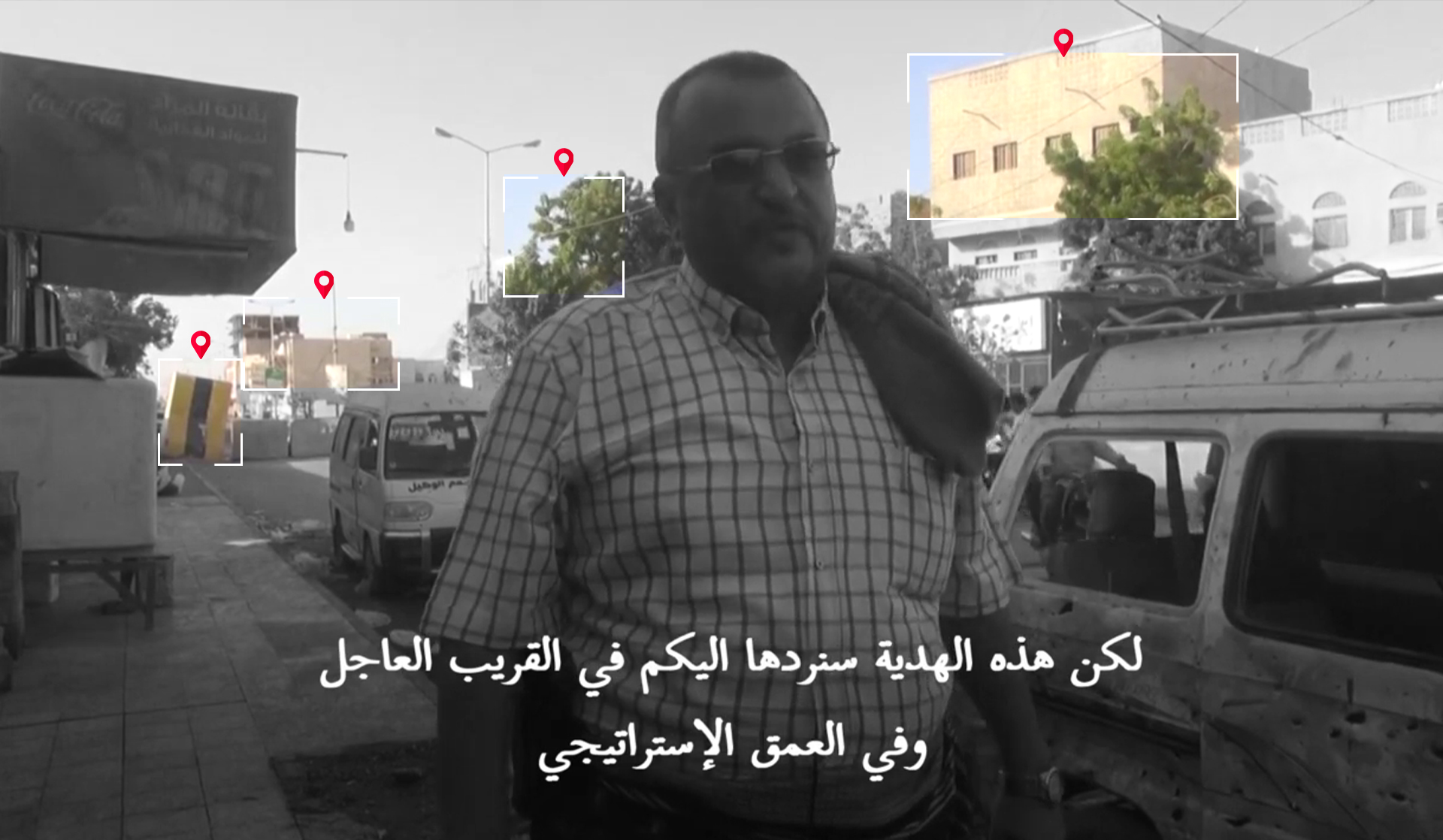 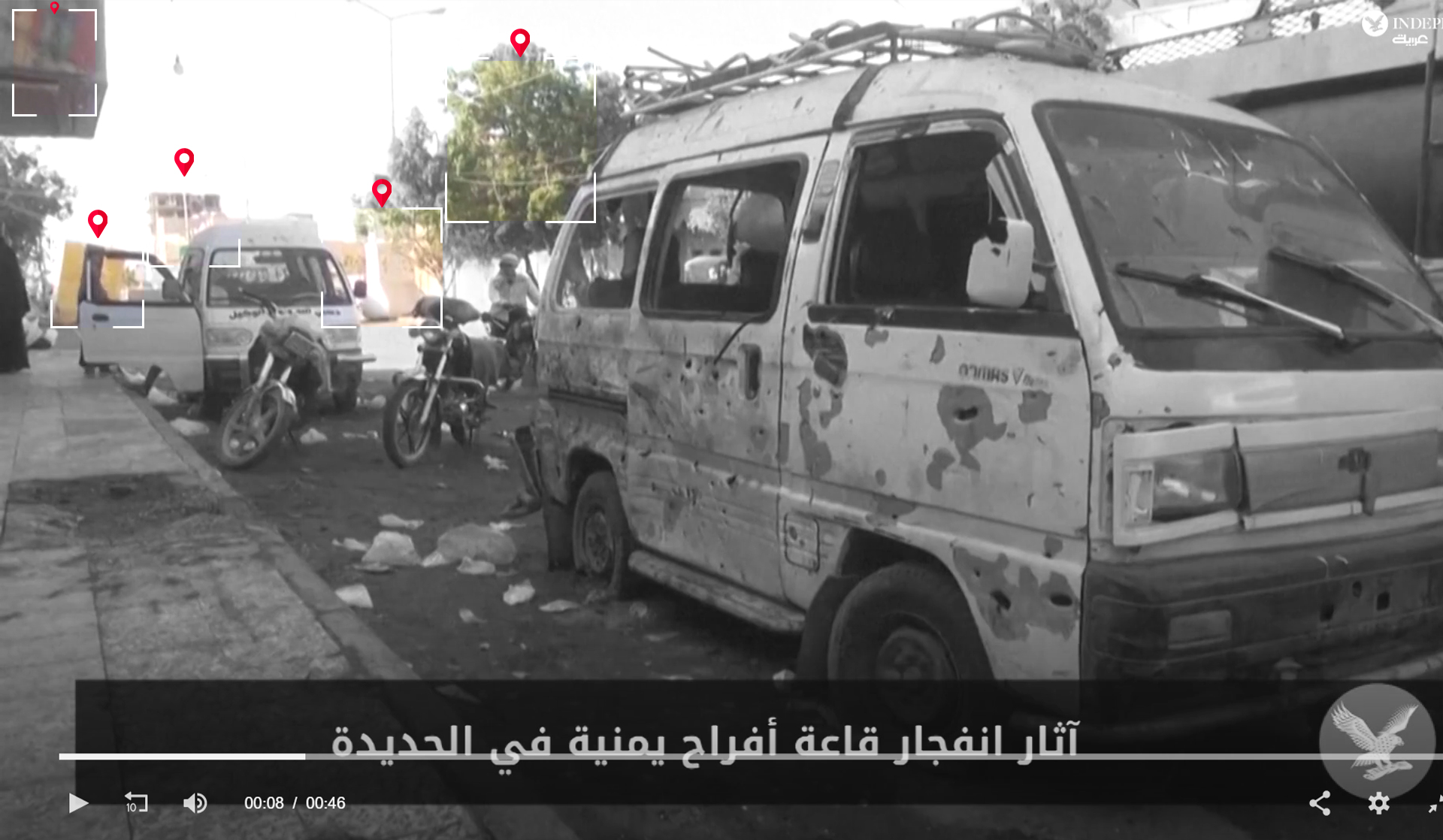 Pictures taken from the Independent Arabia, France Press in Arabic, and RUPTLY 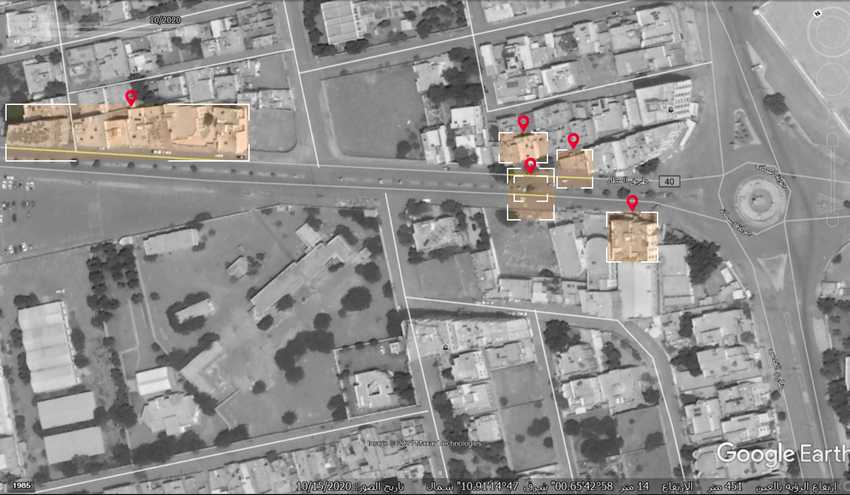 Munitions used in the attack

The size of the crater and shrapnel at the site of the explosion confirm that the munition used in the bombing were mortar shells. Moreover, in testimony given by a person standing next to the cameraman in a video uploaded by RUPTLY, the eyewitness describes the explosion, detailing that he heard a fan-like sound before the munition hit the ground. A fan-like sound is often heard when mortar shells are used in an attack. 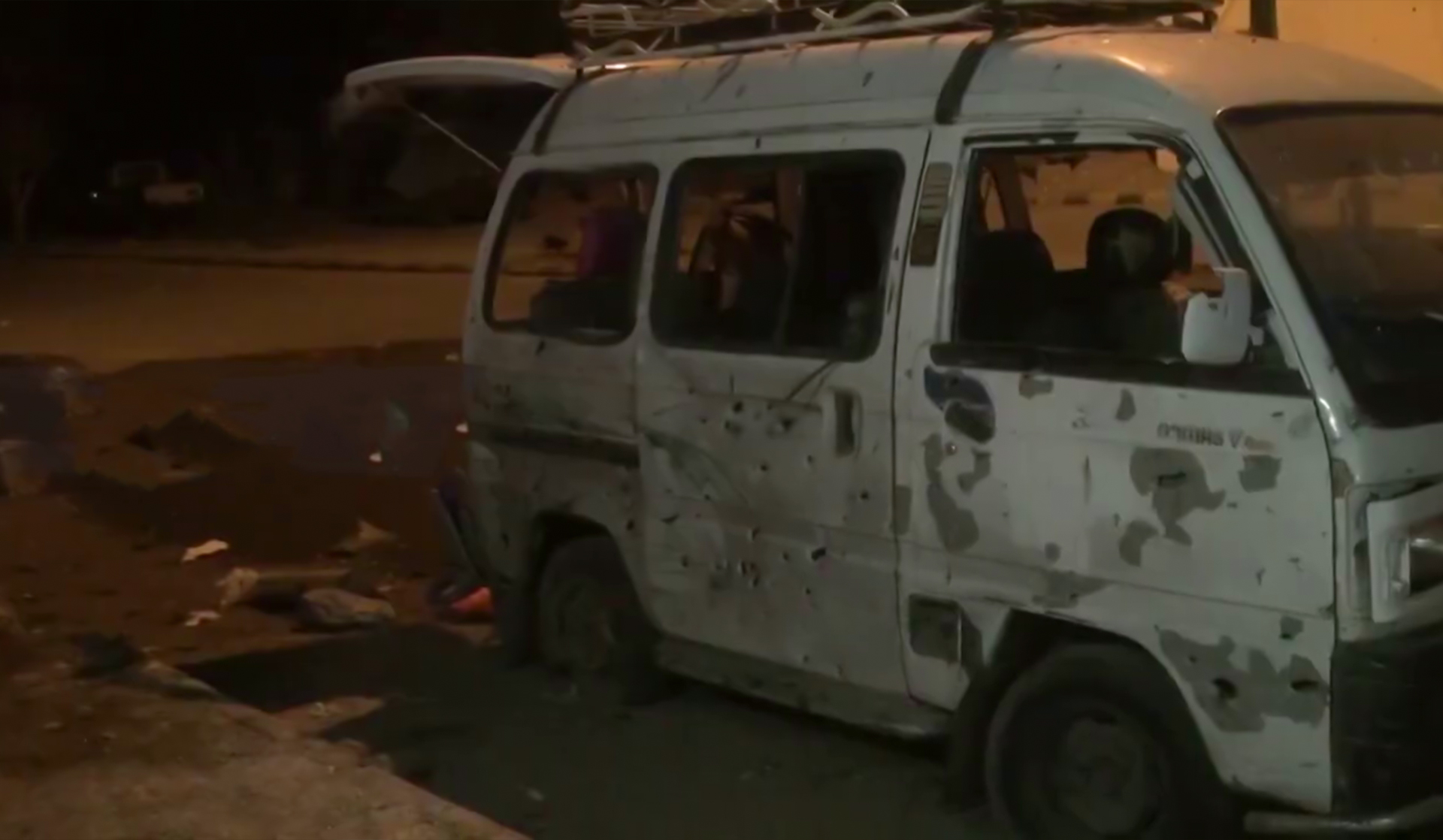 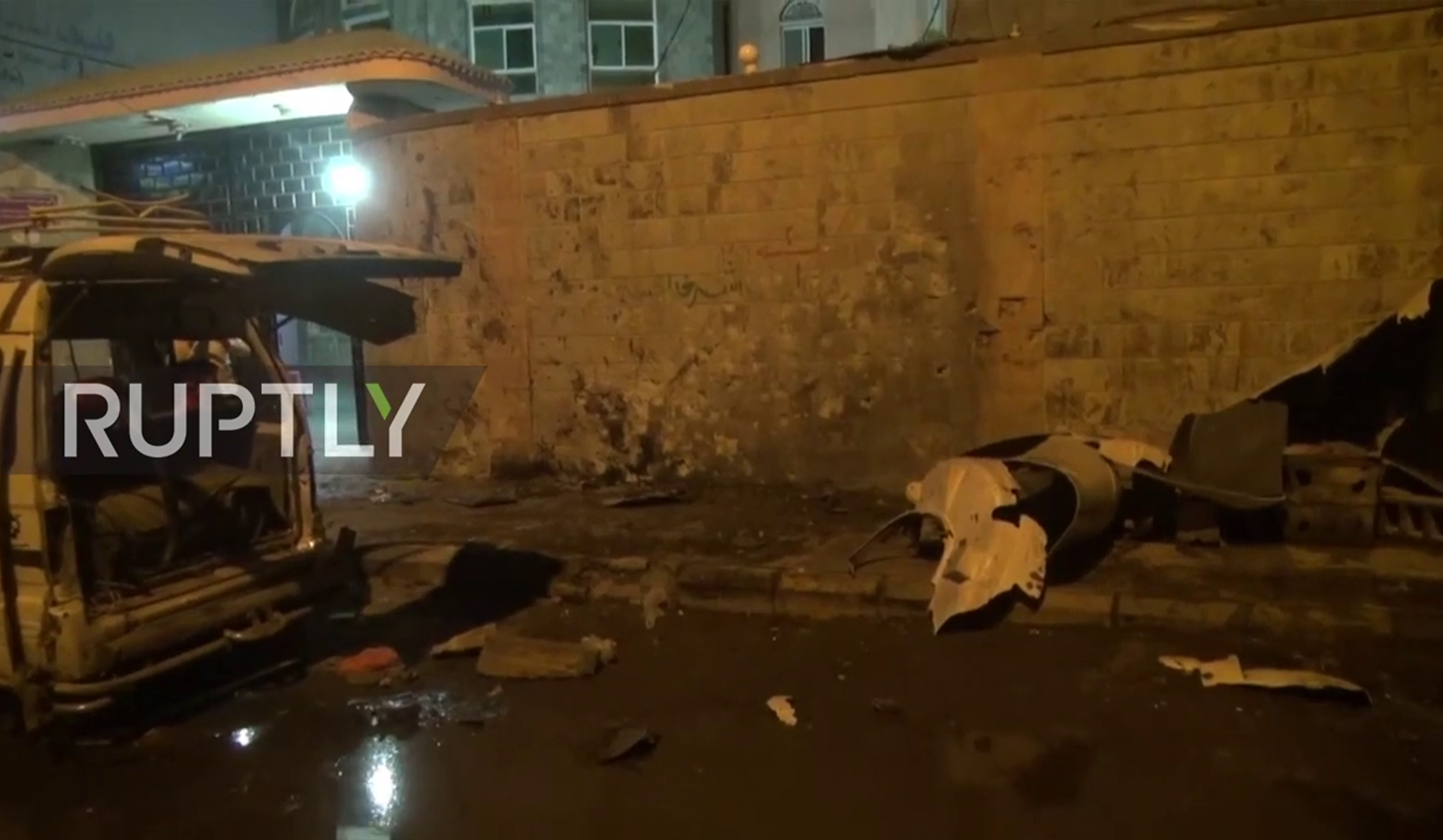 Potentially responsible for the attack:

By comparing the impact of mortar shells shown in the”Targeting the women’s prison” investigation, specifically how shrapnel dispersed when the shell explodes, Yemeni Archive determined the direction of the mortar’s launch.

The previous investigation concluded that the attack used 81mm mortar shells launched from the western direction of the prison. Yemeni Archive noted in the following pictures that most of the shrapnel, which killed and injured a number of prisoners, were blown towards the south and north, that is, in the two directions opposite to the angle of the fall of the shell. This shows how the mortar shell splits. 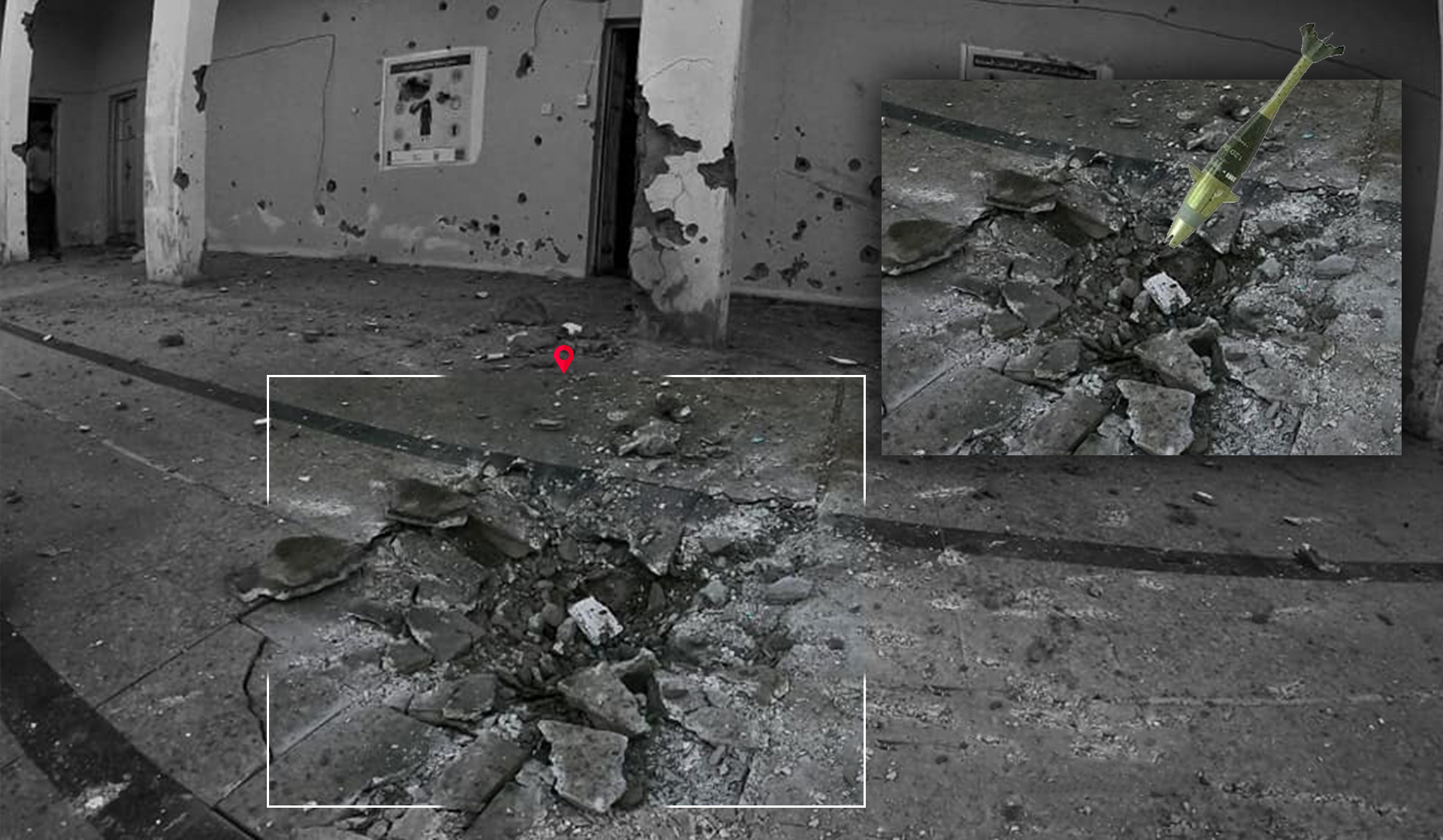 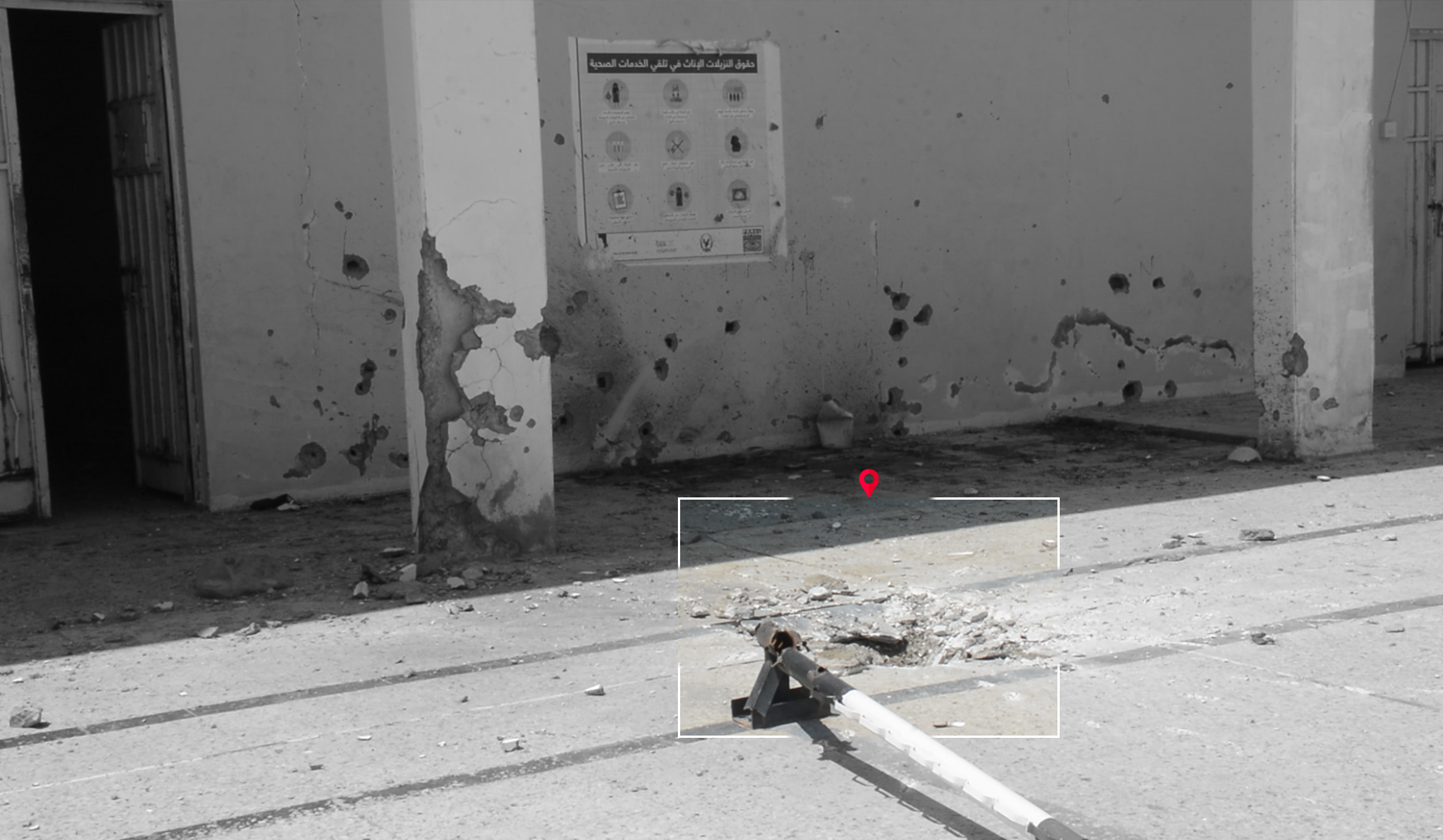 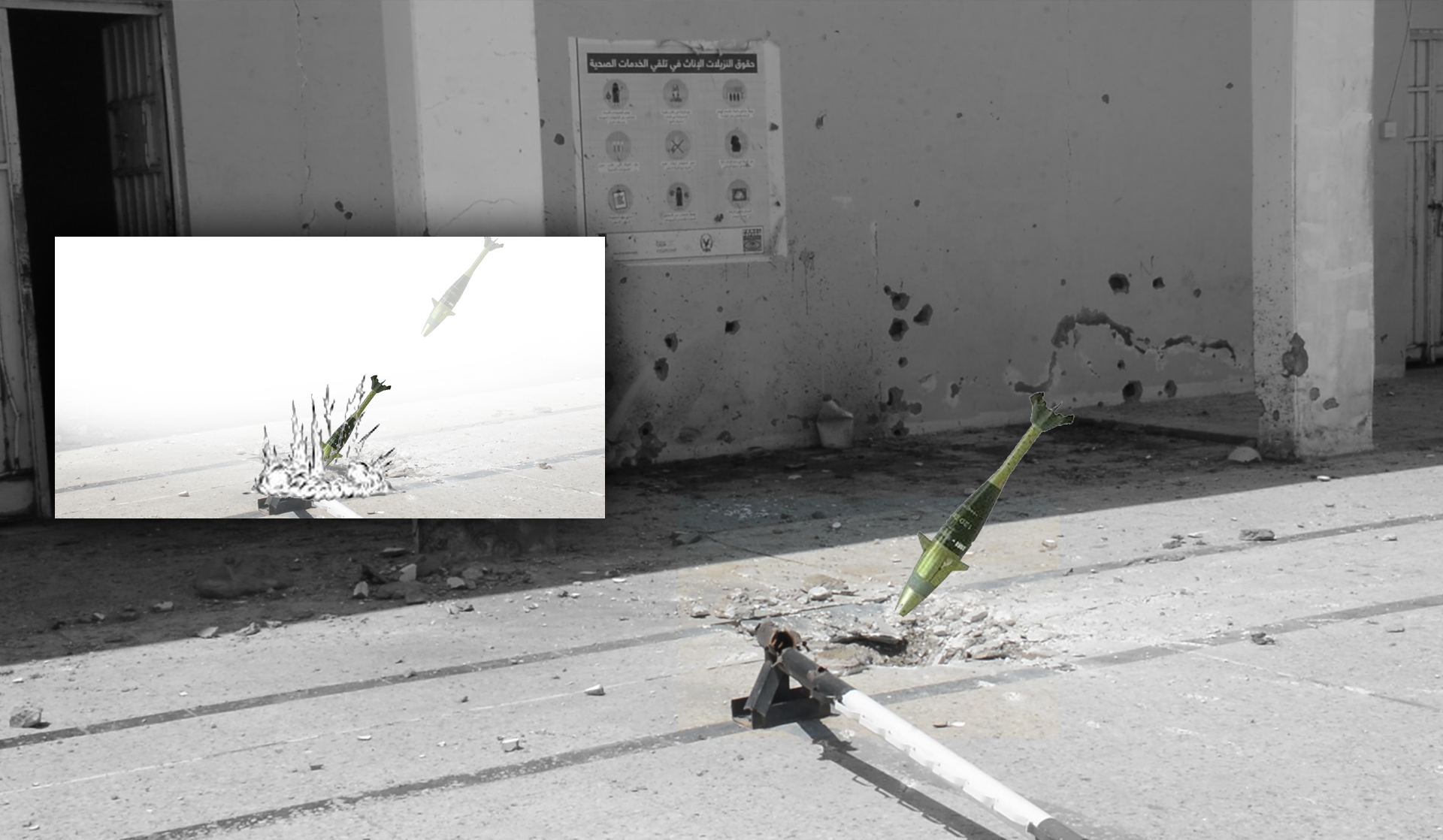 After analyzing the visual evidence in the content published after the Al-Mansour wedding hall attack, determining the direction the shell’s explosion after falling to the north and south, and matching this analysis with the conclusions from the “Targeting of the women’s prison” investigation, Yemeni Archive was able to identify the shell’s possible launch sites. 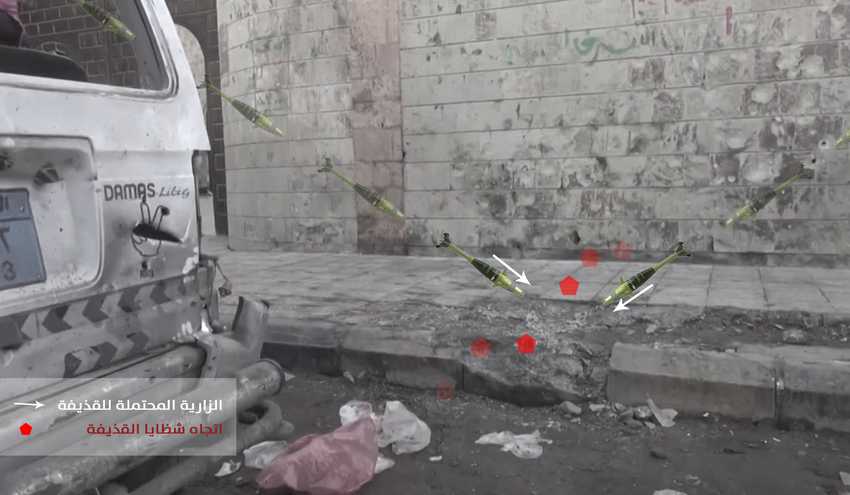 Pictures taken from the France Press in Arabic video 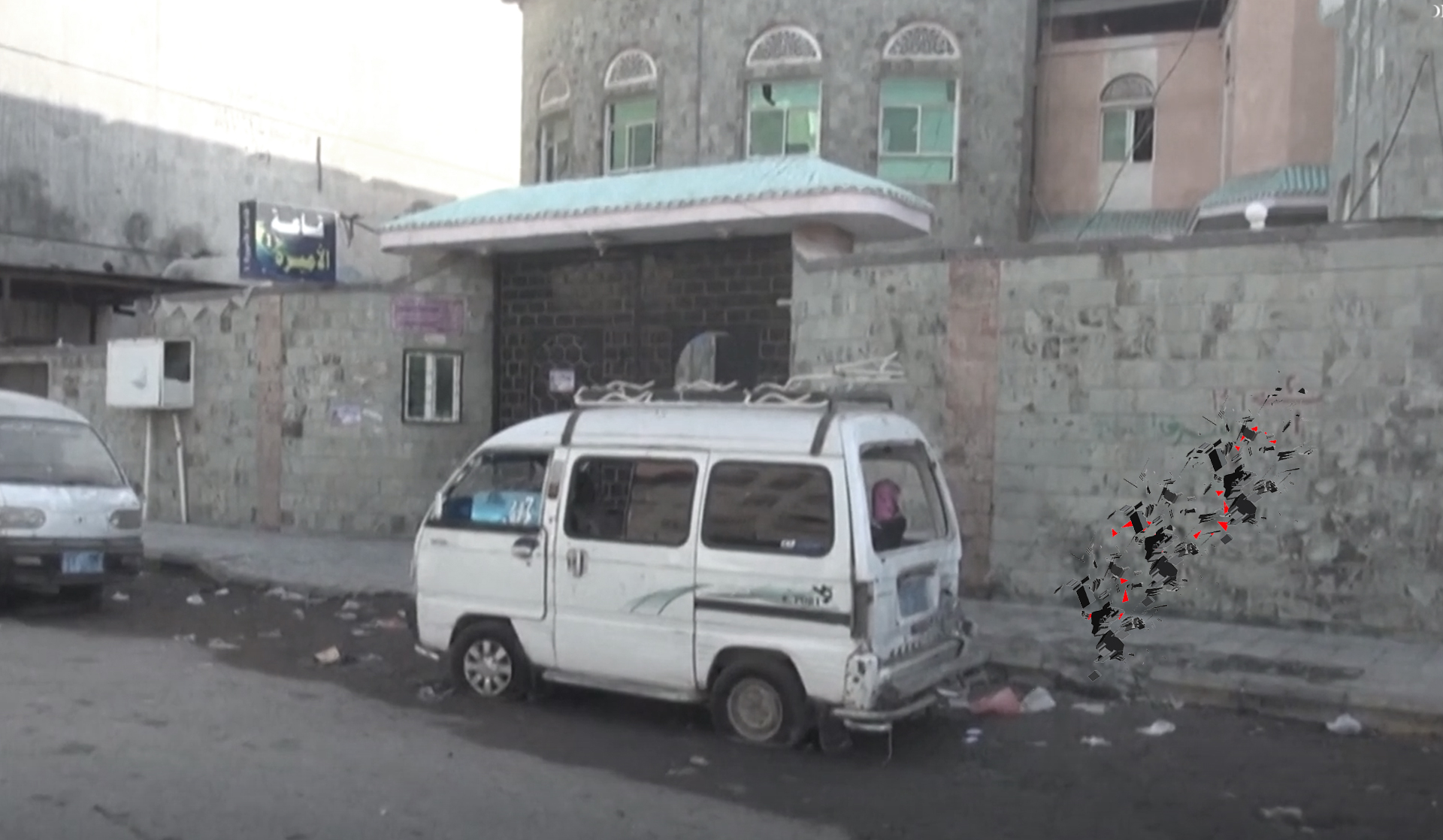 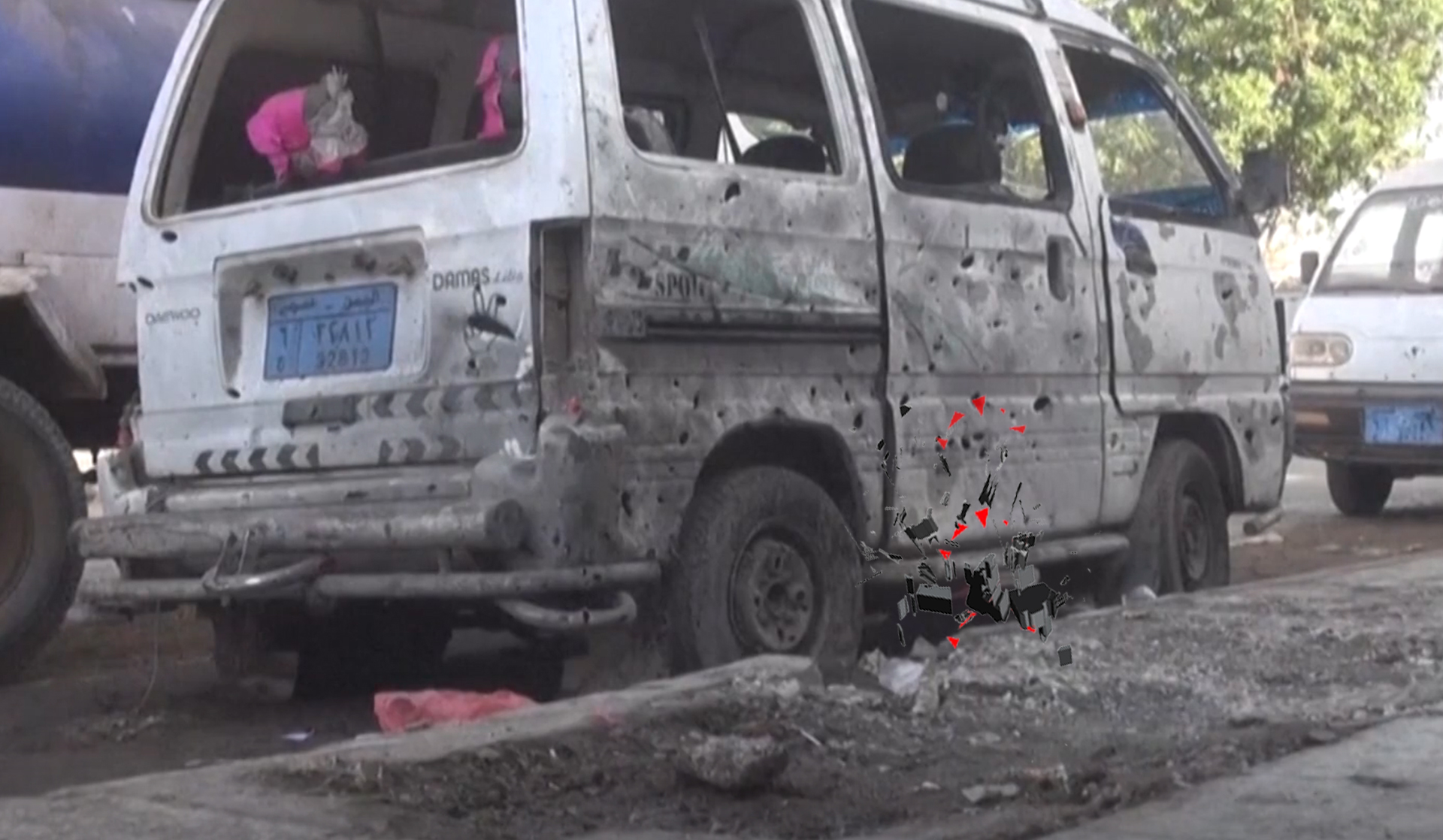 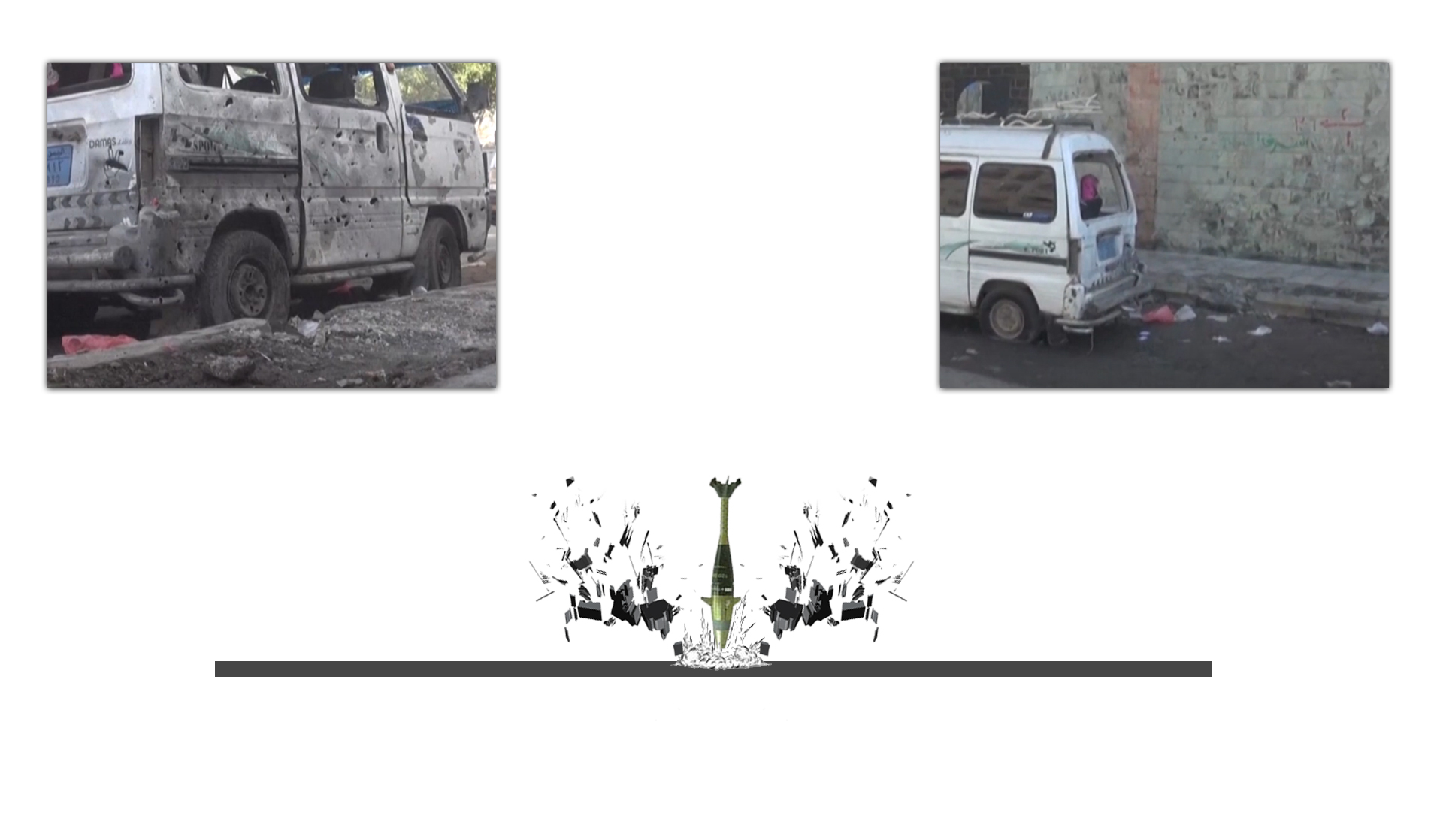 Excluding the north and south directions to reduce the scope of the analysis, Yemeni Archive plotted the remaining possible directions from where the mortar was launched using Google Earth.The potential directions were West, East, Northwest, and Southeast. 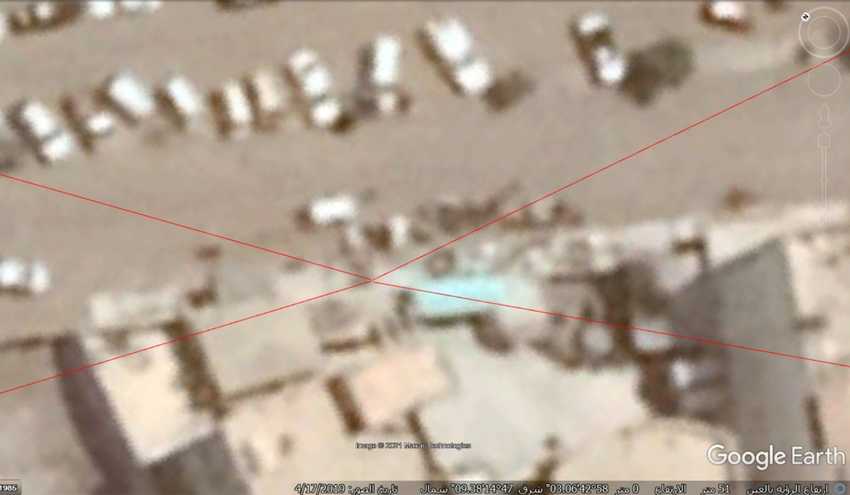 The 81mm mortar has a maximum range of 3 km from its launch site to the impact point. Plotting a radius equal to the range of 3 km from the blast point using Google Earth and drawing a straight line from the hall complex, Yemeni Archive was able to conclude four possible locations for the launch, two of which constitute the closest possibilities: 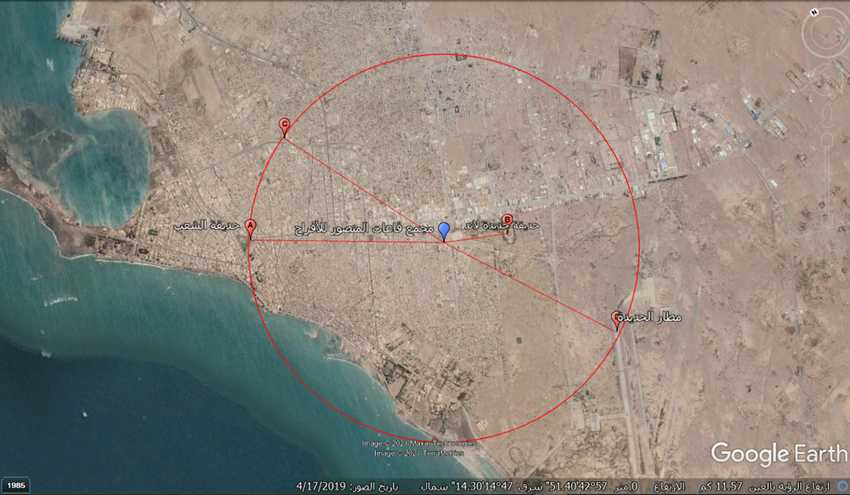 Satellite image from Google Earth. Using the scale tool to draw the shelling range and direction of the mortar.

Although there is no evidence to definitively confirm the exact location of the mortar’s launch site. According to a news report published by the Al-Watan news site on October 11, 2018, the Houthi forces used the Al-shaab Park and the Al-Hudaydah Land Parks as military sites.

By analyzing the military control map for Al-Hudaydah city and the front lines near the city, shown in a picture published by the “Middle East War Maps” account on Twitter, Yemeni Archive determined that the “Joint Forces on the West Coast” site is located to the east of the Al-Mansour wedding hall complex, meaning that it is outside of the mortar shell’s range. This suggests that the Houthis are likely to be responsible for the attack. 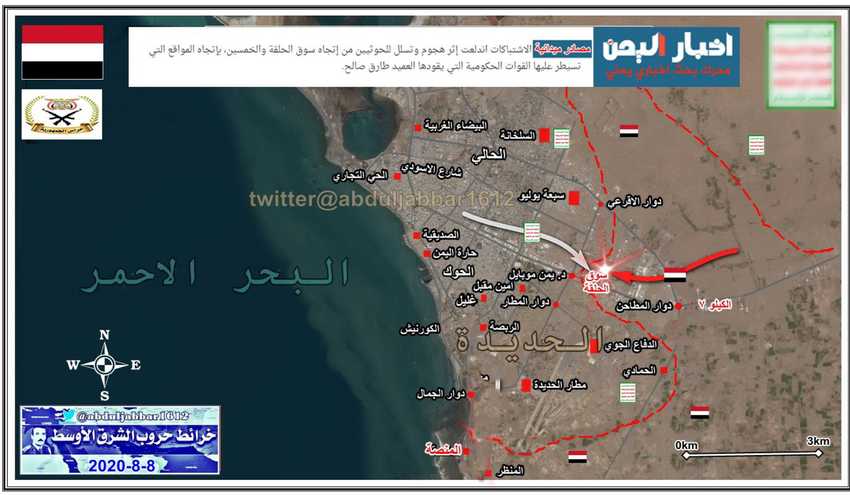 The attack killed three civilians, including two children, and injured seven others. Those killed and injured in the attack were near the wedding hall waiting for their families to leave from a wedding held there that night.

Pictures of the victims of the attack were published on Facebook by “Ahmed Abdel Hafeez Al-Hattami” (a brother of one of the victims) , the “Al-Hadath Channel” Facebook page, and “Al-Sharia Press 24” news site.

Positions on the attack:

The head of the United Nations Mission to Support the Al-Hudaydah Agreement (UNMHA), Lieutenant General “Abhijit Guha”, expressed— in a statement posted on the Mission’s Twitter account—his deep concern about reports of many civilians killed and injured in the bombing of the Al Hawk district in Al Hudaydah. He also condemned all the human rights violations occurring inAl-Hudaydah, especially the ones that cost civilian lives. 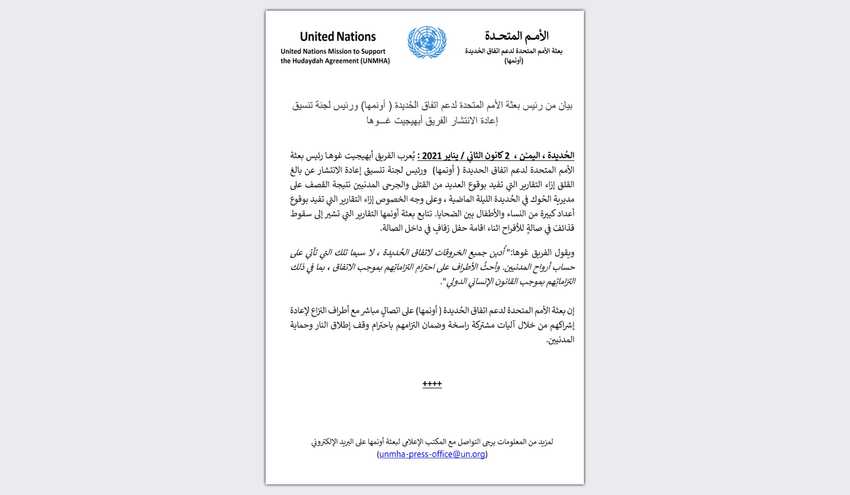 A picture of the United Nations Mission to Support the Al-Hudaydah Agreement (UNMHA) statement.

Through the information detailed above, Yemeni Archive concluded that on the first day of January 2021 between 22:20 and 22:27 Yemeni local time a mortar shell hit the pavement near the gate of the Al-Mansour Wedding Hall Complex in Al-Hawk District of the Al-Hudaydah governorate, killing three civilians and injuring seven others.

An analysis of the open source visual content available from the attack and a calculation of the maximum range of mortars using Google Earth reveal the possible sites of the mortar’s launch. All possible sites for the launch were located in areas within the Ansar Allah Movement “Houthis’” control. This makes it like that forces affiliated with the Ansar Allah Movement “Houthis” are responsible for the attack.