Attacks on Sharis Bridge in the Hajjah governorate

An investigation reveals multiple attacks on Sharis Bridge in the Hajjah governorate, between September 15 and September 23, 2015.

Incidents gathered and identified by Yemeni Archive from open-source information originally collected in our “Attacks on Access” database reveal that the Sharis Bridge, located in Al Taweelah area of the Sharis district in the Hajjah governorate, was attacked by a number of airstrikes three separate times between September 15 and September 23, 2015. These attacks killed 18 people and injured more than 16 others. The airstrikes destroyed a 20-meter portion of the bridge cutting off the Hajjah road, which connects the Amran, Hajjah, and Al Hudaydah governorates.

After the bridge was cut off, a temporary, rough alternative road was built to ensure small cars could pass. The new road damaged civilian vehicles as it passed through torrents caused by heavy rain, which washed away everything that stood in its way.

The Sharis Bridge is located on the N5 main road in the Al Taweelah area of the Sharis district, 5 km east of the Hajjah governorate center. The bridge passes over a torrential waterway. Monsoon rainwater from the mountains 17 km north of the bridge is collected from two directorates and flows towards the Al Taweelah area. The Hajjah governorate and the surrounding areas are some of the rainiest regions in Yemen. The Sharis bridge is considered a vital throughway that civilians, food, and large trucks pass over to reach the rest of Yemen. 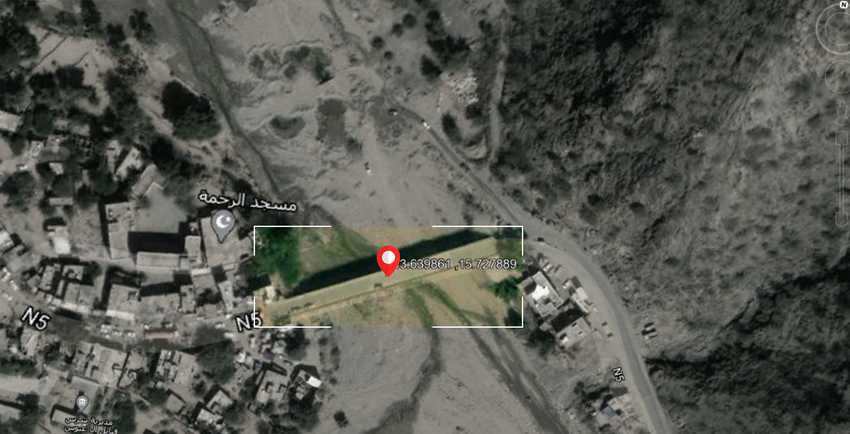 An Image of the bridge location via Google Maps

Open-source reports published on news sites, Twitter, and Facebook covering the airstrikes by the Saudi-led coalition forces on Sharis Bridge in the Sharis district detail that the bridge was bombed three times between September 15 and September 23, 2015. These attacks killed and injured civilians as well as collapsed part of the bridge, pushing it out of service.

A screenshot of news on the airstrikes posted on the “Ansar Allah” news site.

The first bombing caused minor damage to the bridge, but the third targeting - the most violent attack - led to the bridge’s collapse and casualties in civilians as is shown in pictures shared by the local source “Mithaq Al-Sheikhi” on Facebook, and stills taken from a video shared by “Yemen Today” TV on YouTube. 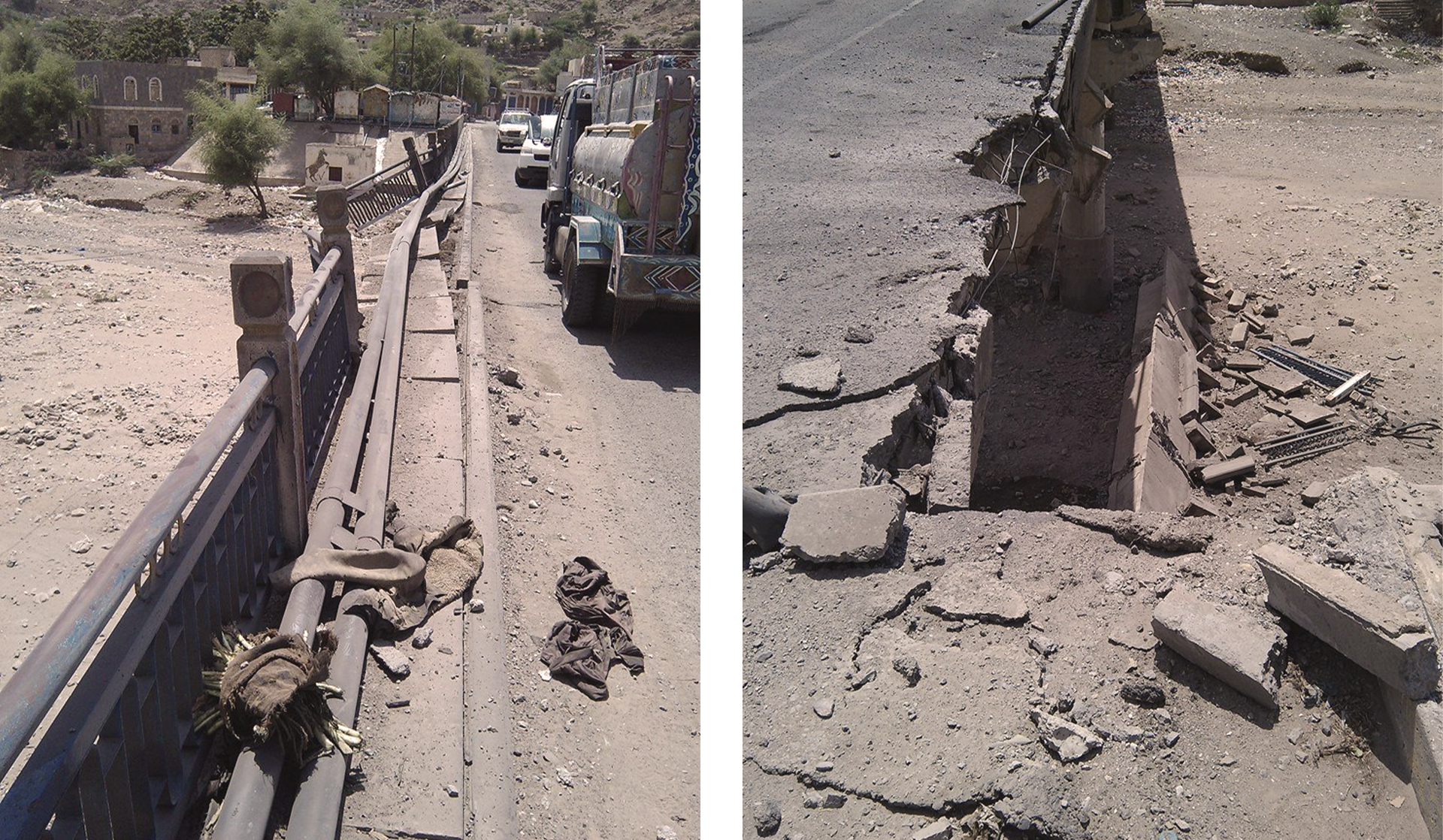 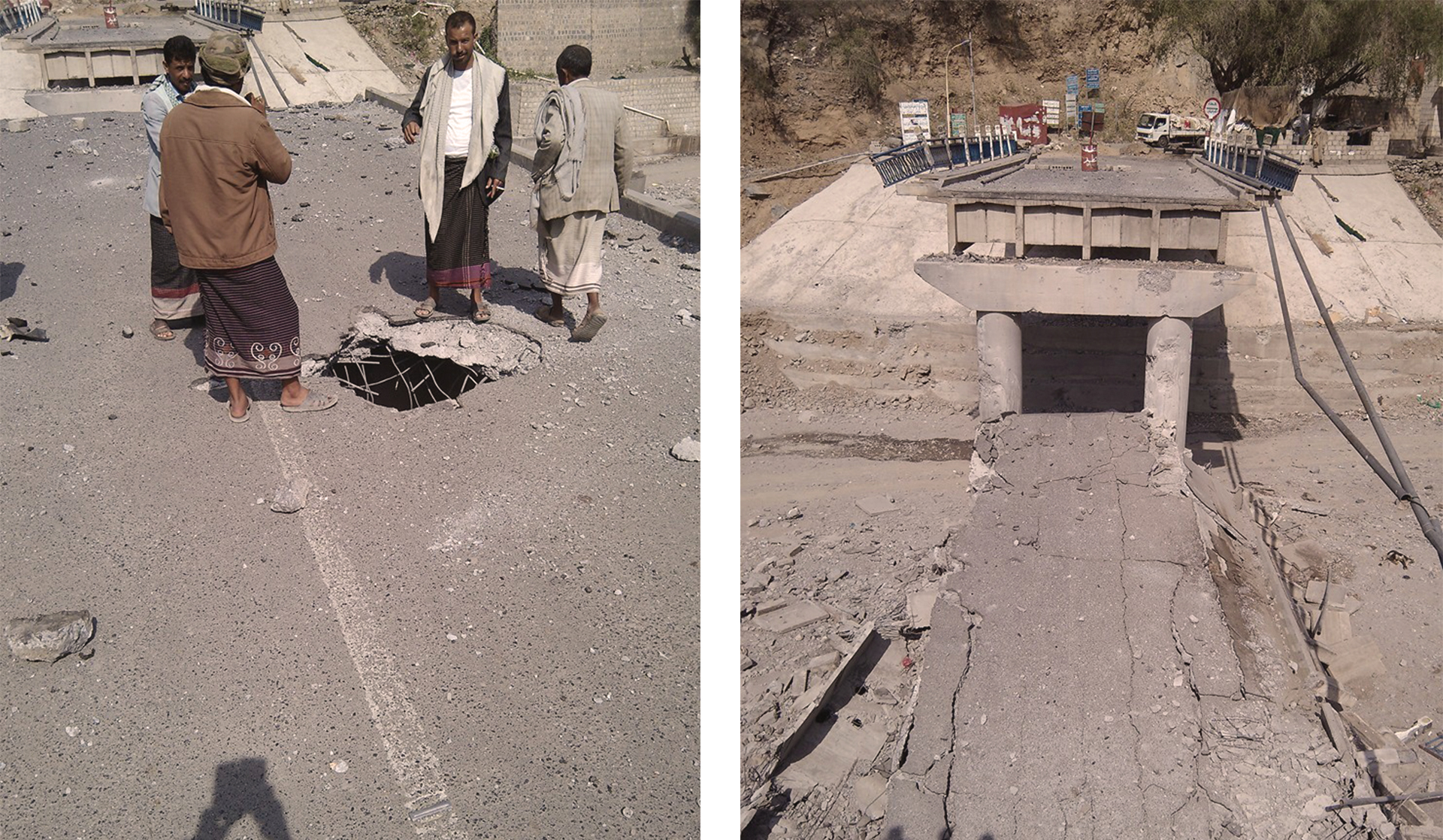 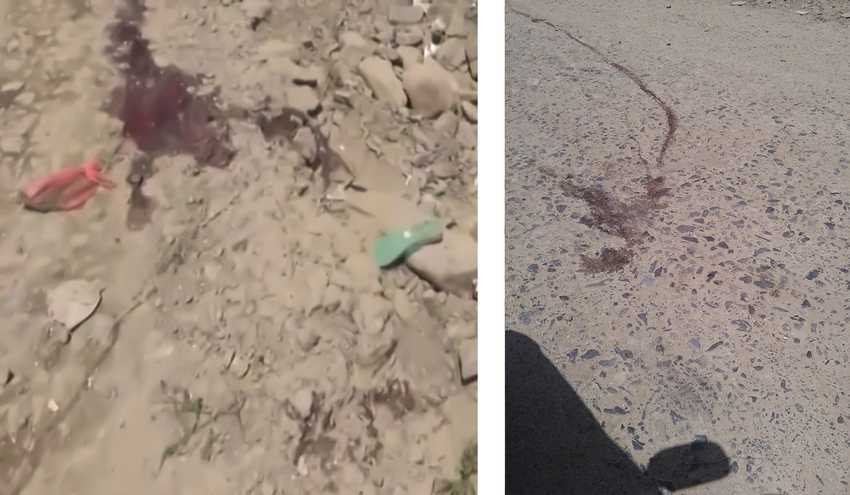 A still from a video shared by “Yemen Today” TV on YouTube.

Open source information indicates that the first attack took place before the afternoon on September 15, 2015. The second attack on the bridge took place late at night on September 19, 2015. The third attack occurred on the morning of September 23, 2015. This is according to an analysis of the timestamps of the first posts online alerting of the three attacks.

The timestamp analysis of the local source “Youssef Al-Darwani’s” posts on Facebook, using the TimestampConvert tool.

Several social media accounts, news sites, and news networks circulated photos and videos of the attacks. After analyzing and verifying the geographic landmarks shown in the photos and videos and then matching them with satellite imagery taken from Google Earth, Yemeni Archive was able to find similarities between the geographic landmarks shown in the published content and satellite imagery.

To accurately determine the geographic location of the attack, Yemeni Archive analyzed visual content from pictures shared on Facebook after the attack by several local sources (Youssef Al-Darwani, Issa Al-Rajhi, and Abu Al-Ezz Al-Qadami), and matched them with the terrain view satellite images taken from Google Earth. 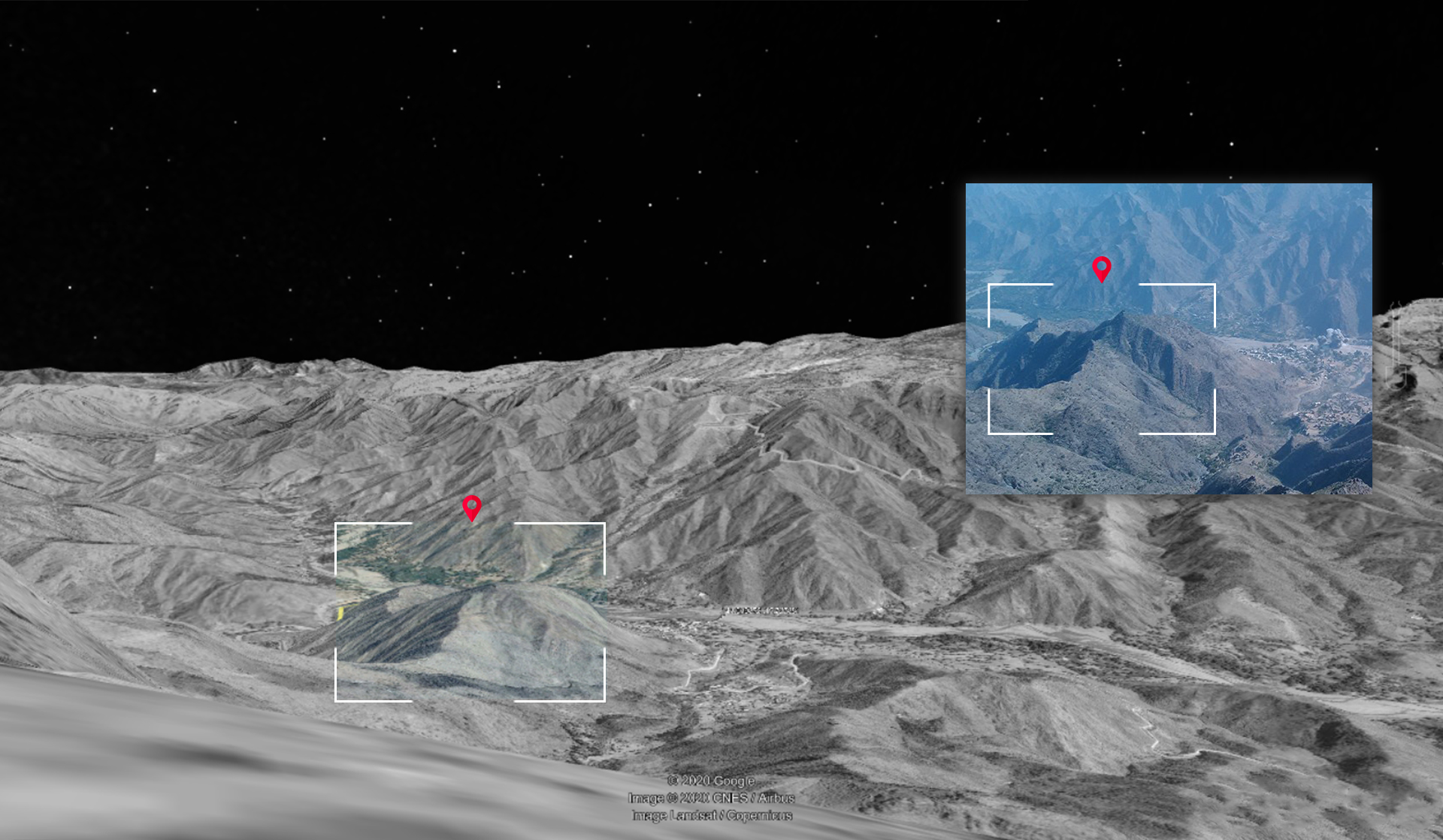 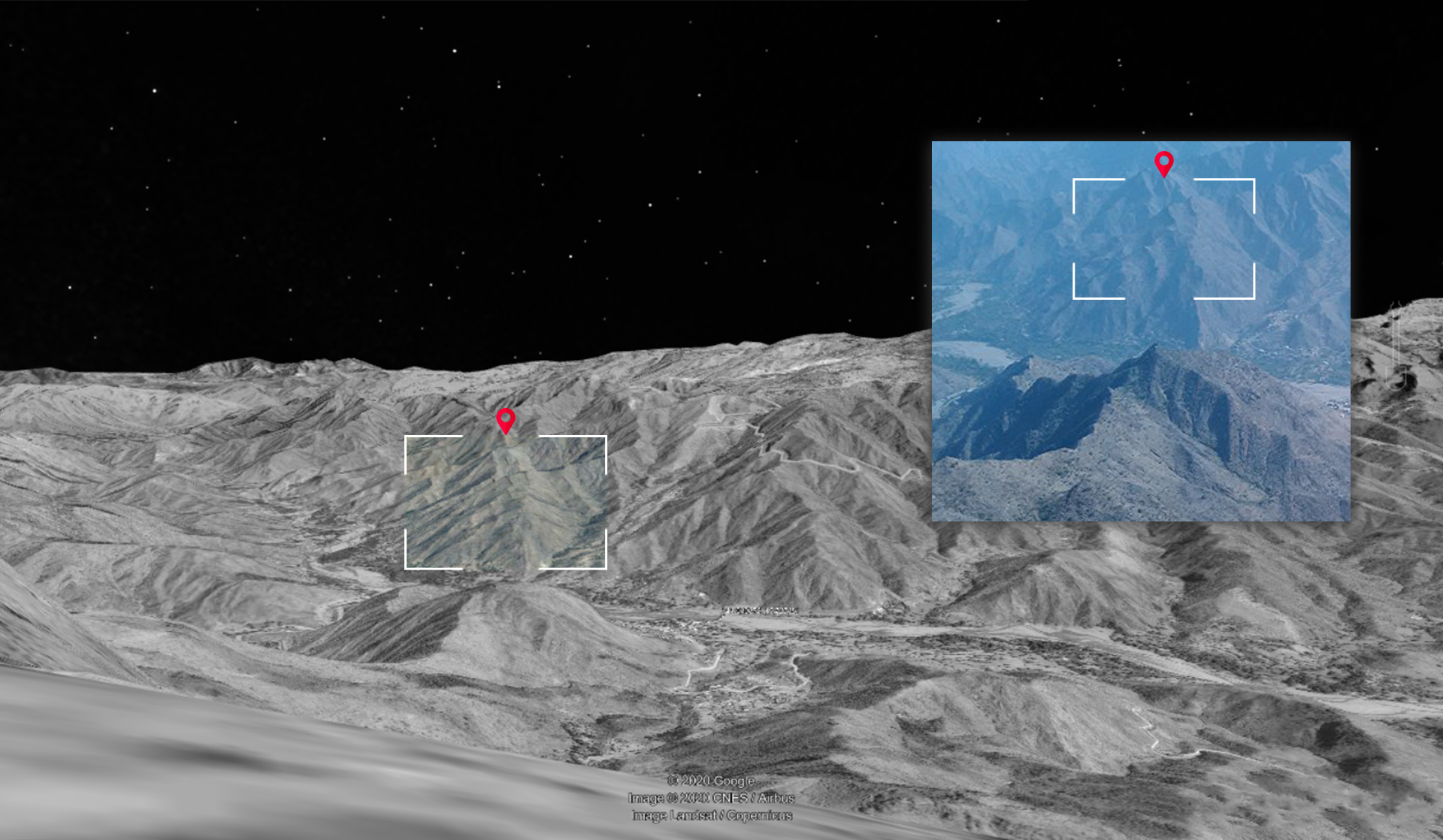 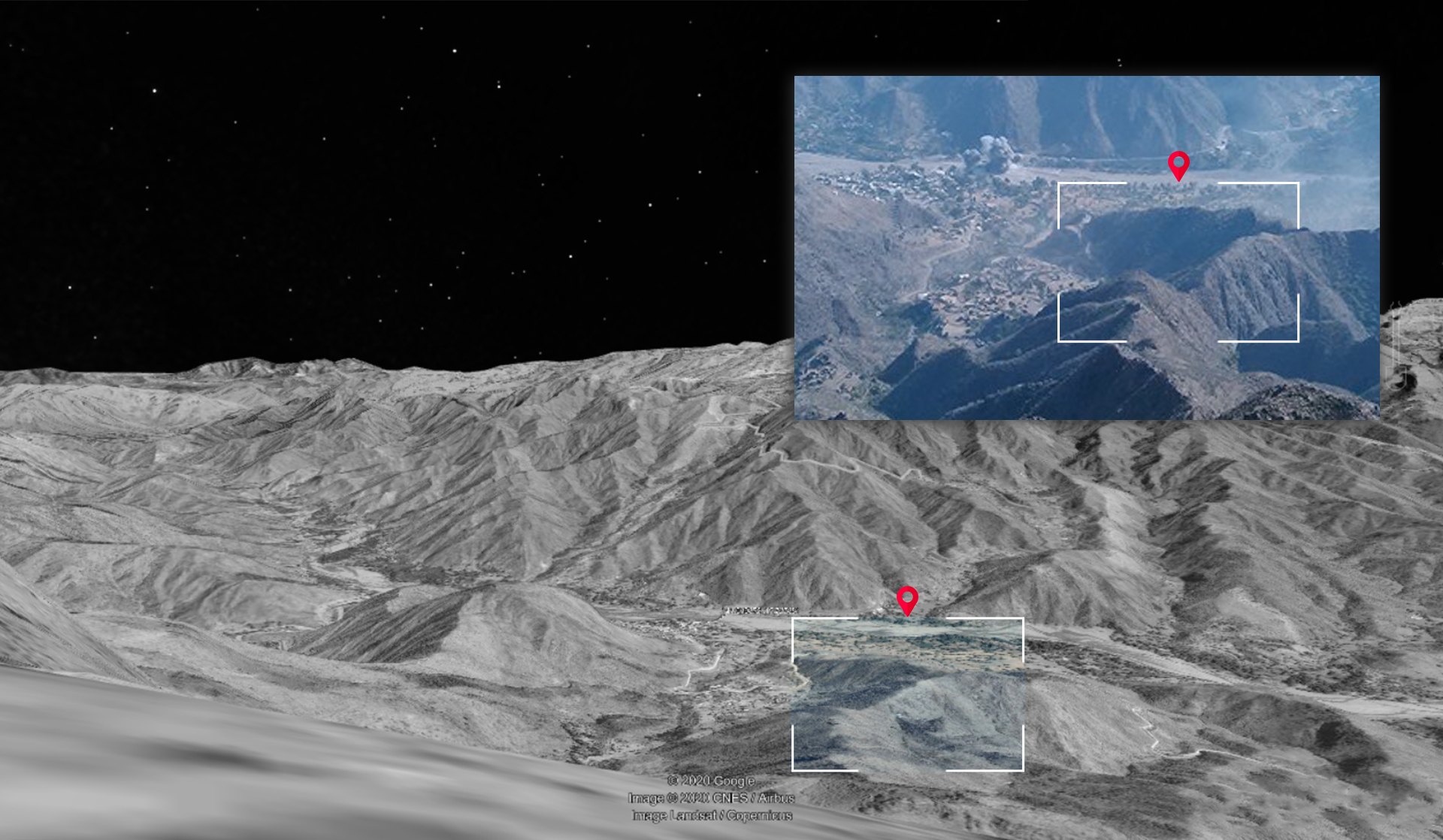 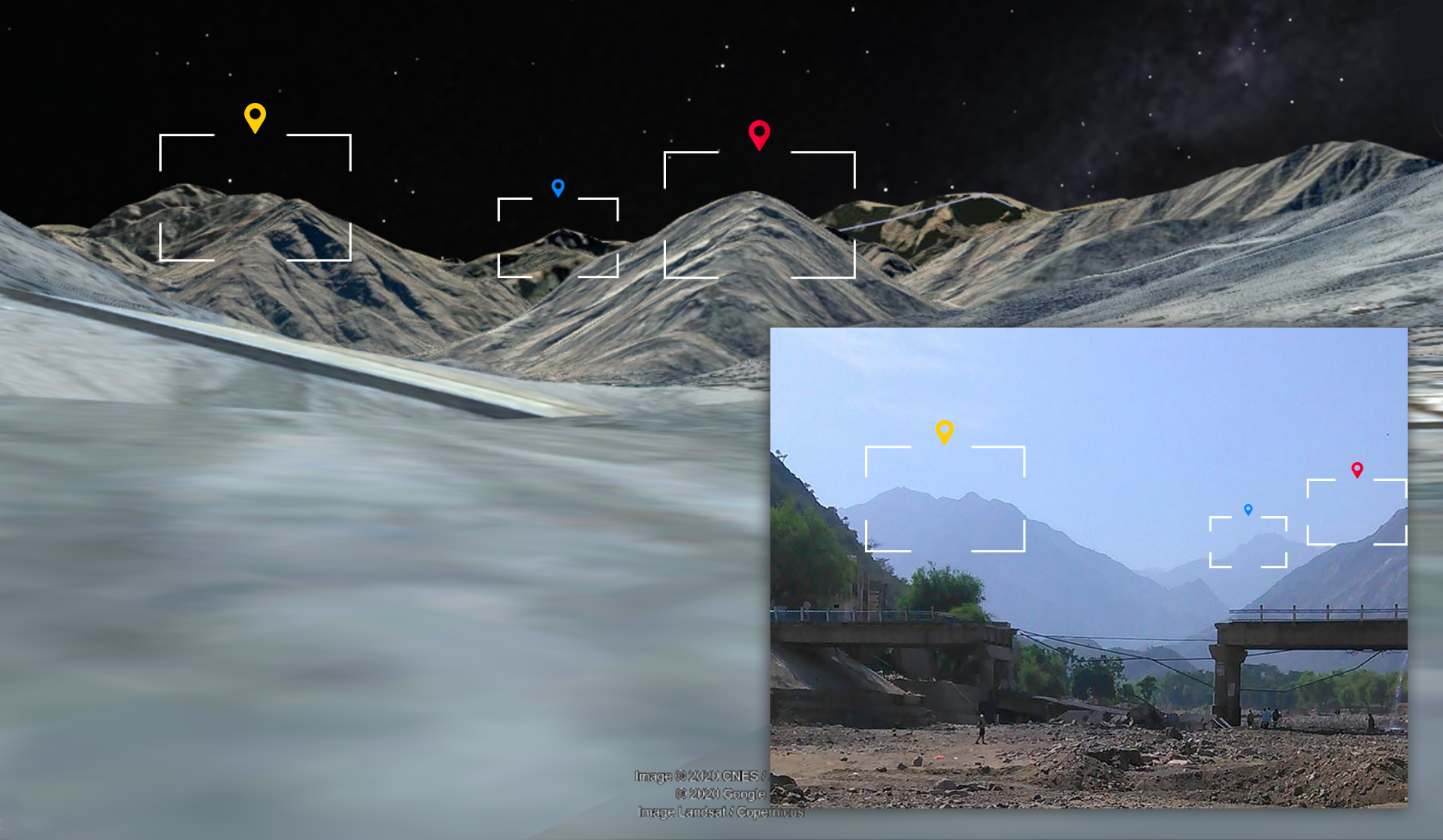 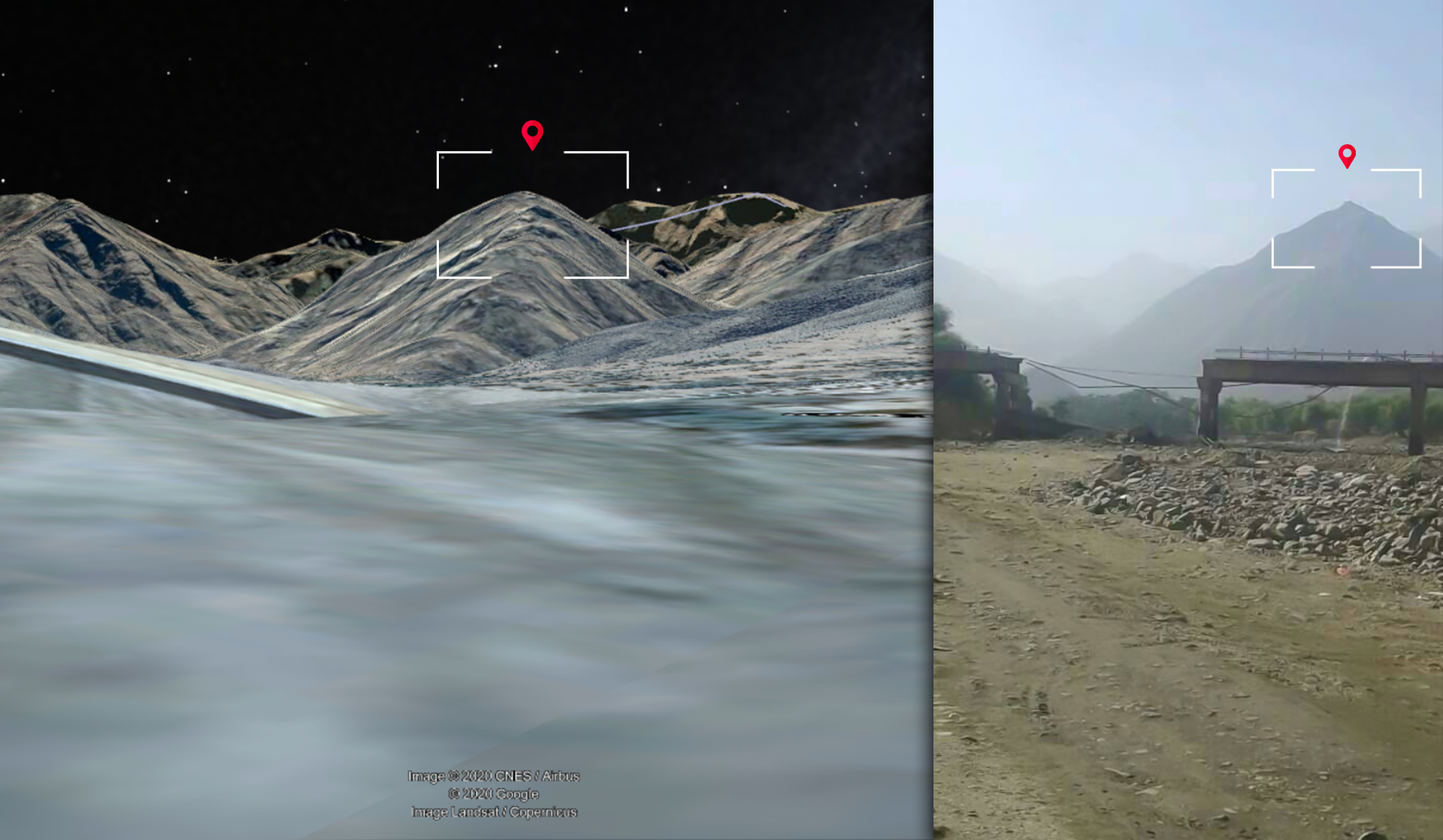 From the front of the bridge, several buildings can be seen in two different directions. These buildings were shown in a video shared by the local source “Mahmoud Ayyash” on Facebook, in several photos published in an article by “Hour News” news site, and in a post by the “General Corporation For Roads And Bridges” on their official Facebook page. 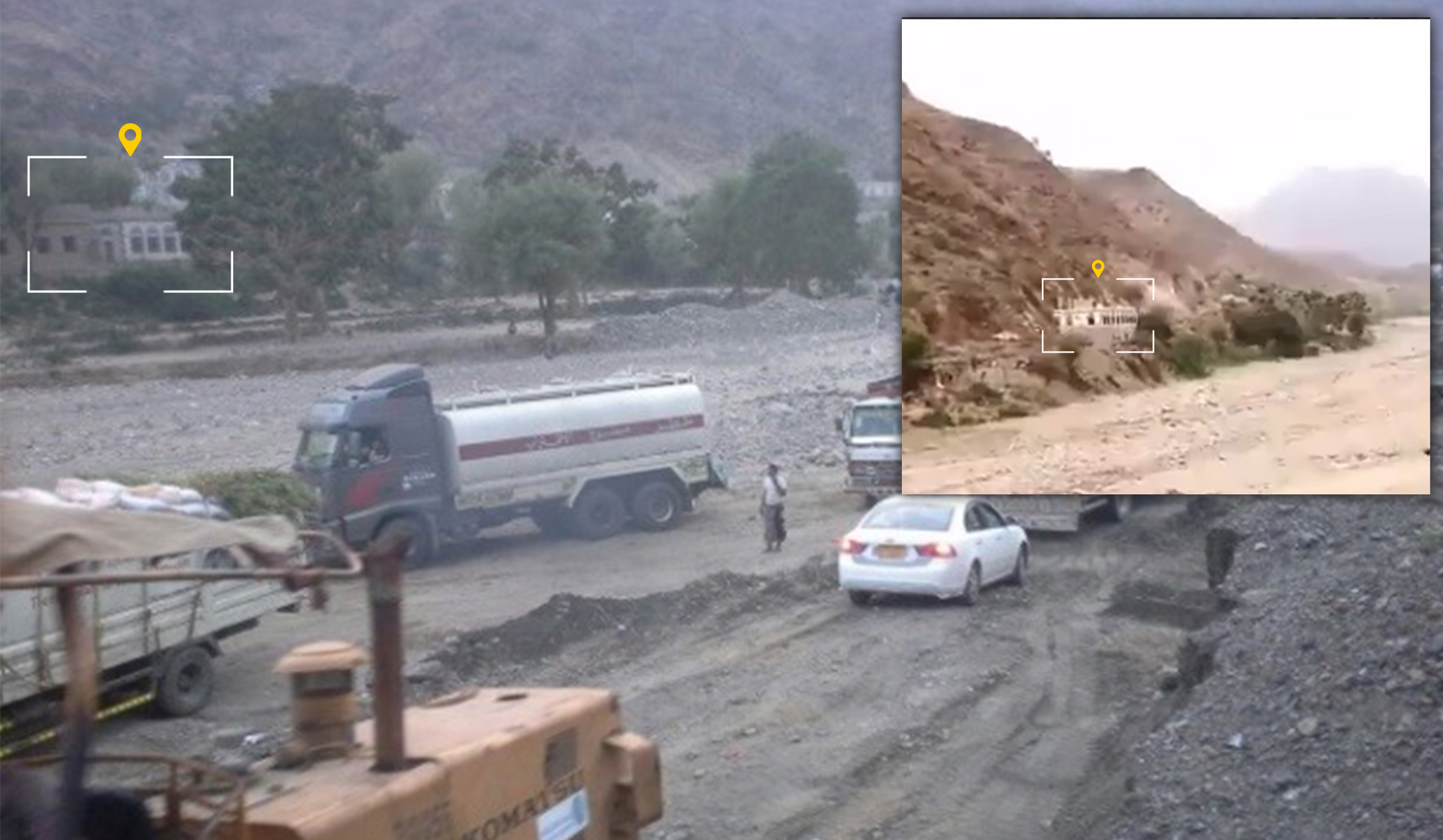 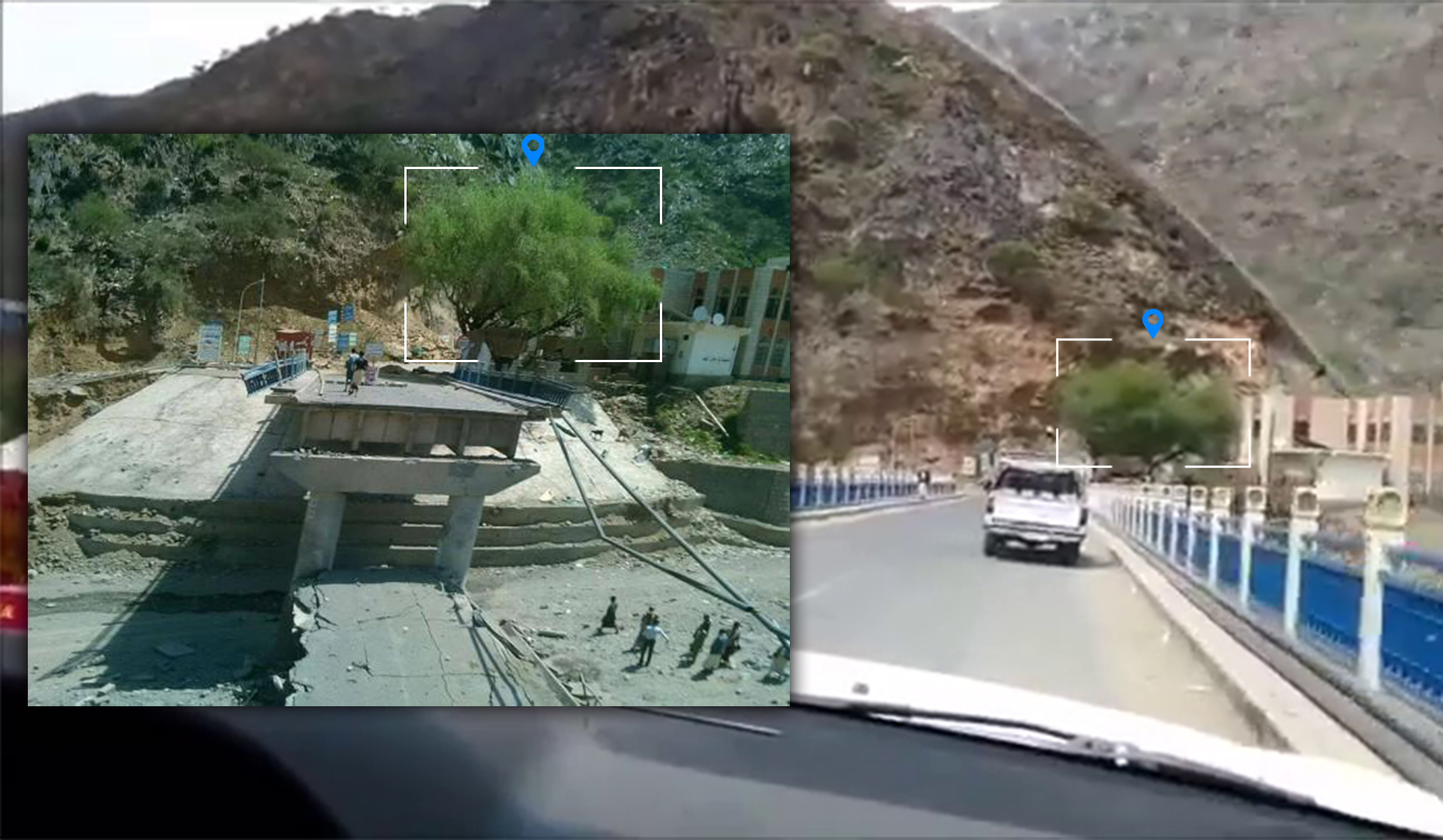 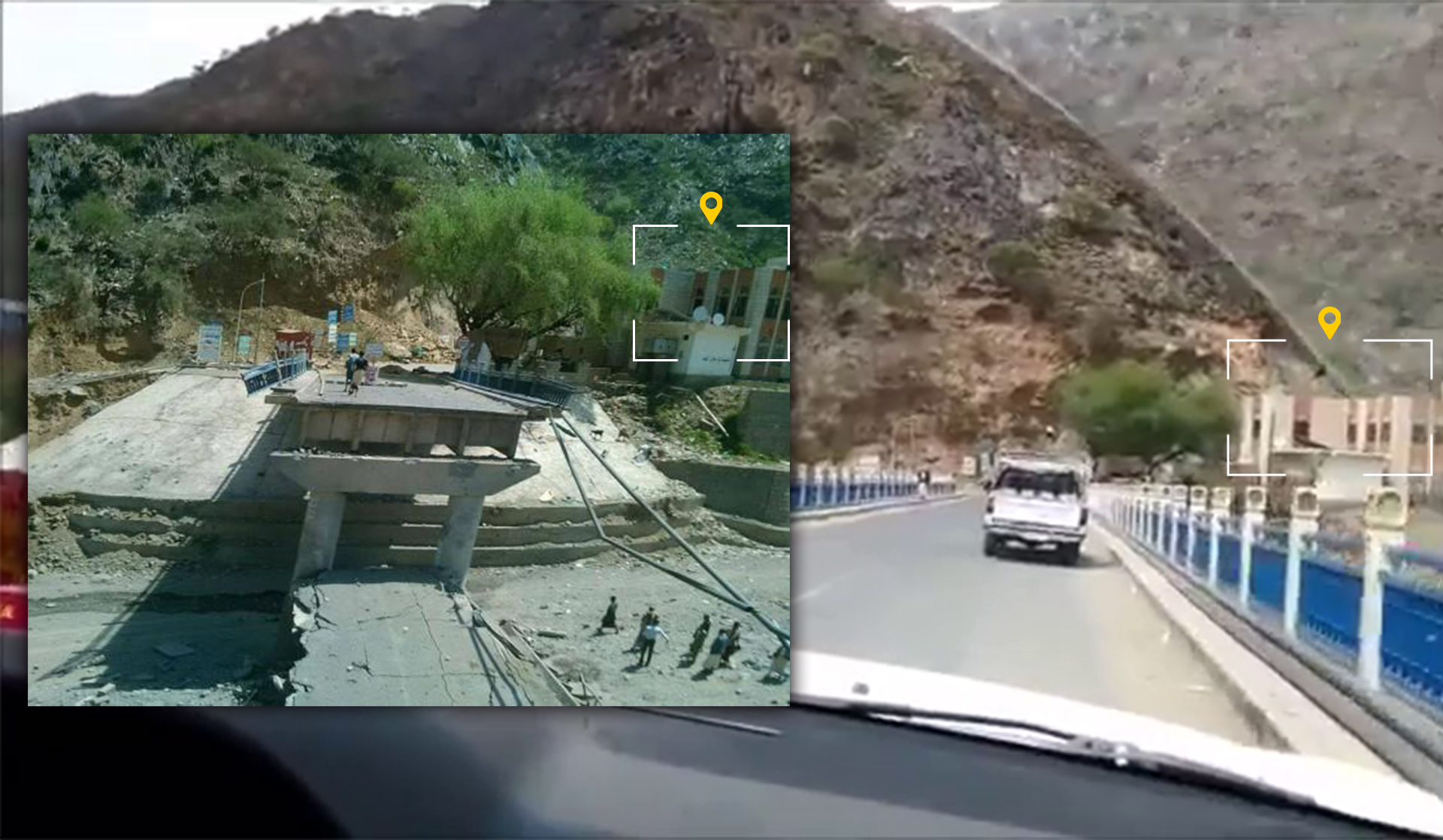 Screenshots taken from a video posted by”Mahmoud Ayyash,” images from the “Hour News ” website, and the “General Corporation for Roads and Bridges” official Facebook page 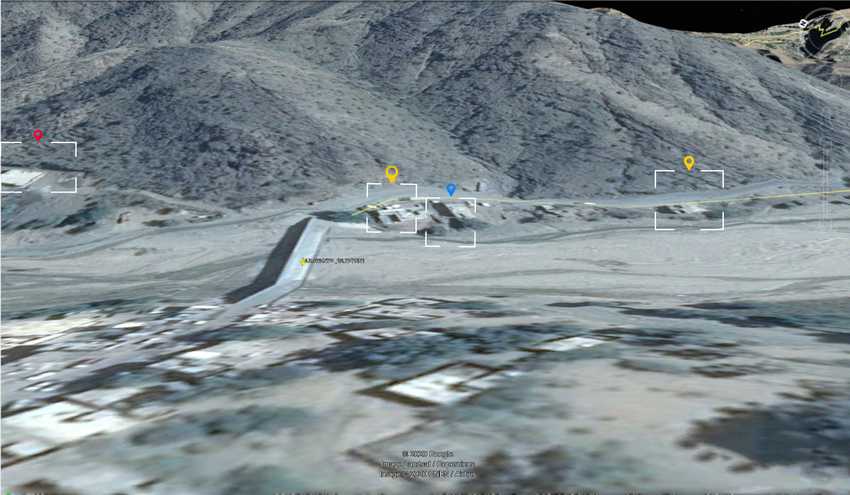 A satellite image of a bridge taken from Google Earth

From the other direction, shown in a video shared by “Yemen Today” TV, a mosque minaret can be seen to the left of the bridge. In pictures shared by the local sources ”Mithaq Al-Sheikhi” and ”Al-Khaled Sanaa” on Facebook, several buildings and trees can be seen on the right to the bridge. Yemeni Archive was able to analyze and match these landmarks with what’s shown on satellite imagery from Google Earth. 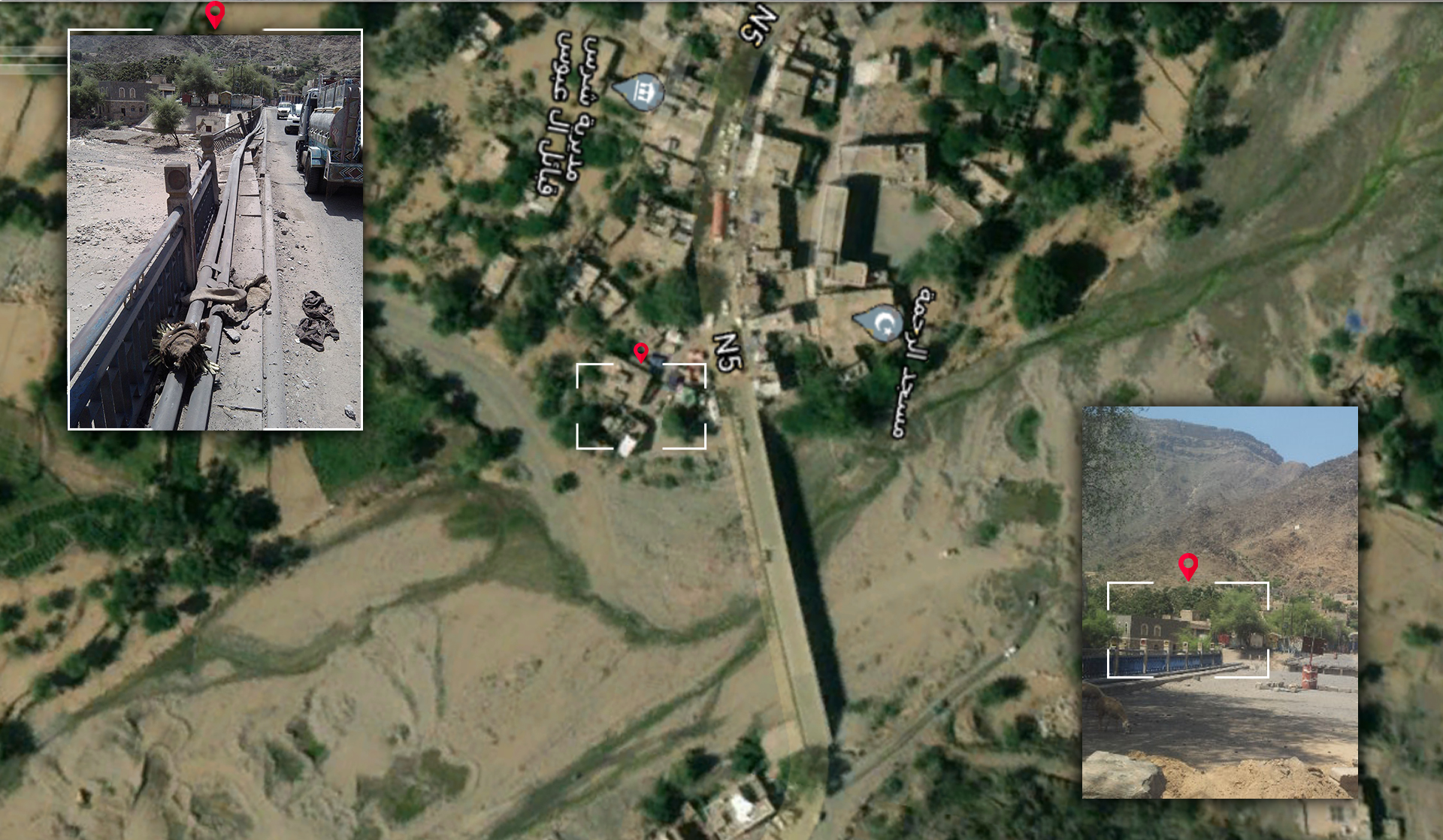 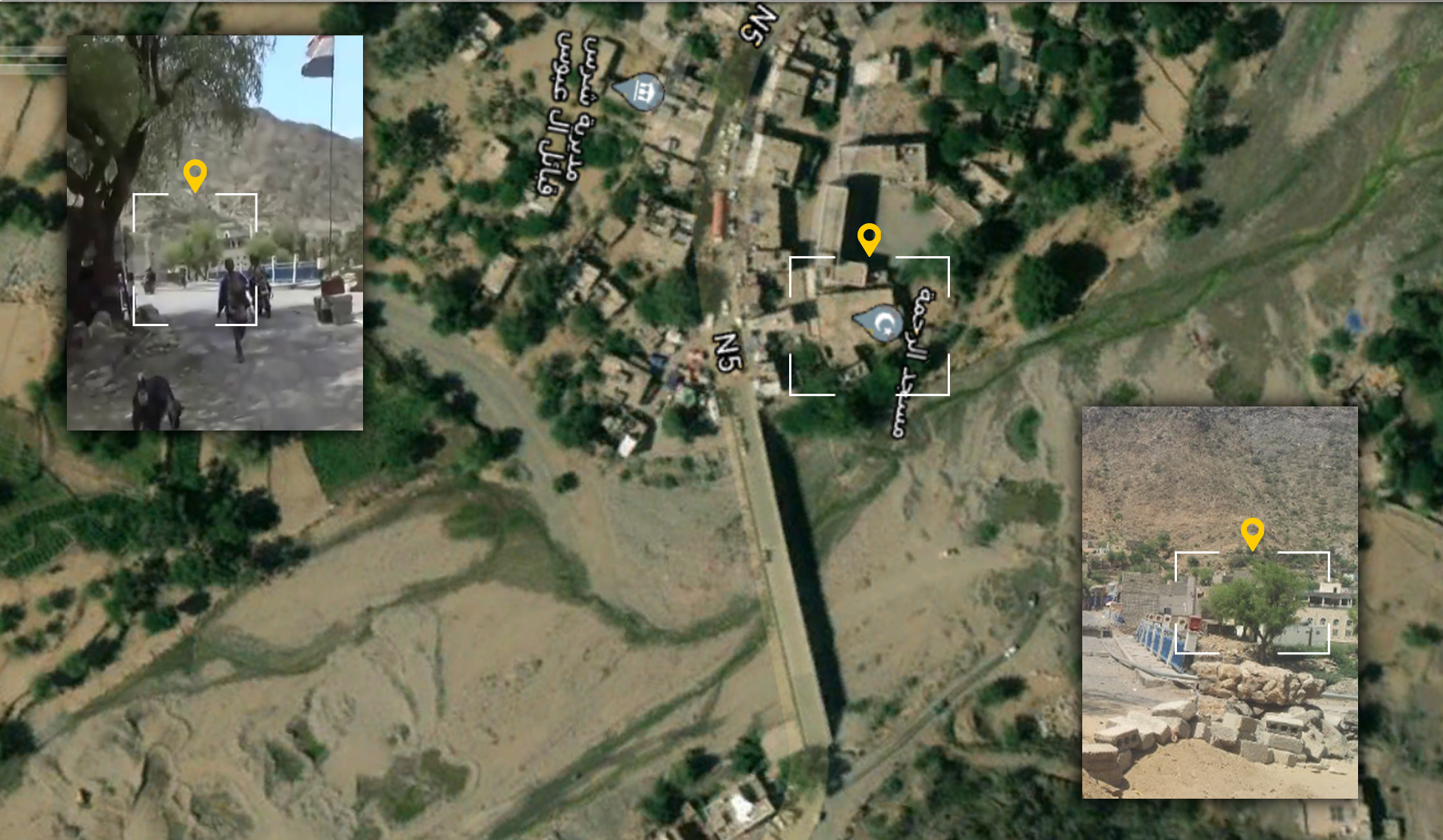 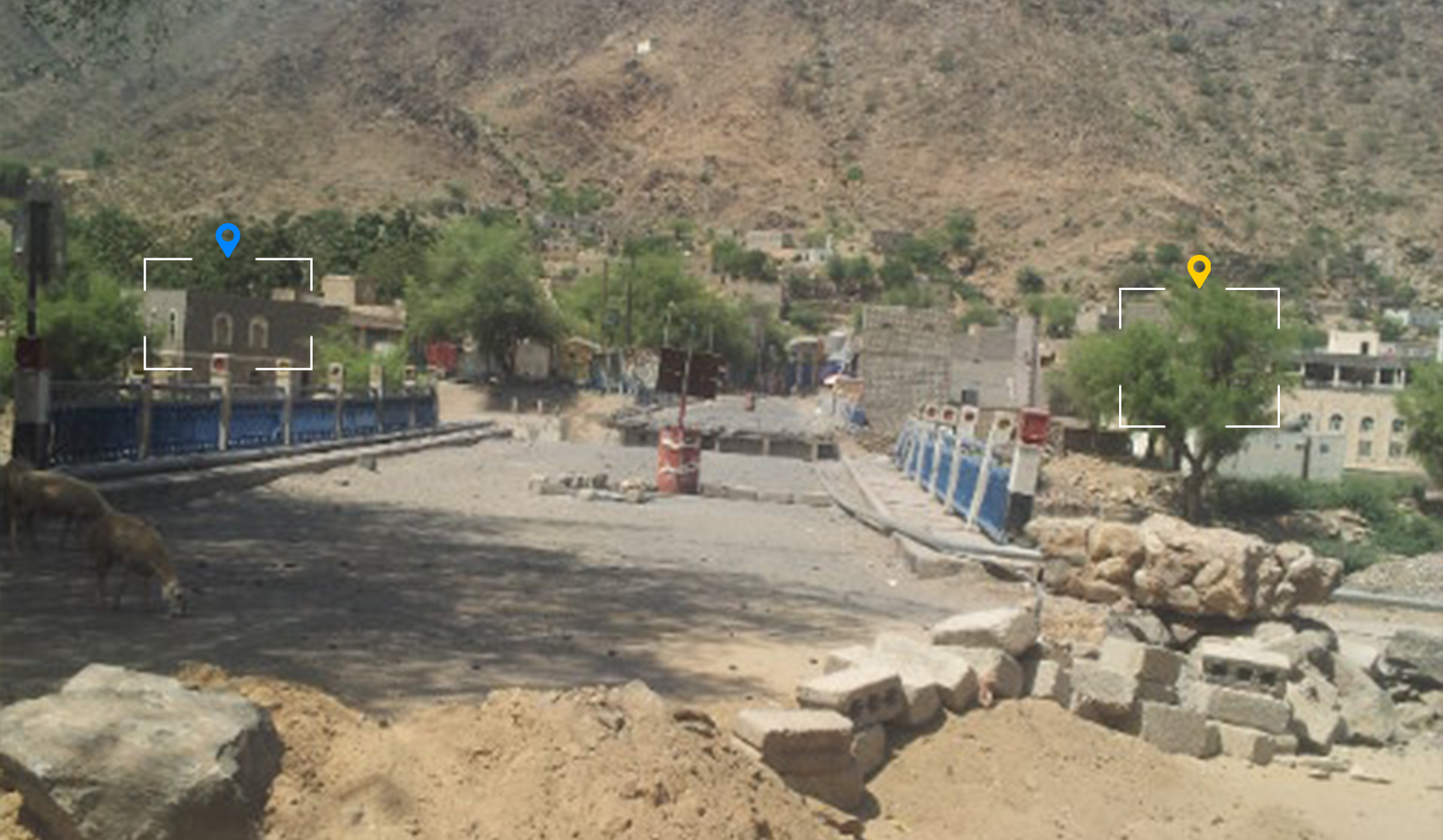 After analyzing landmarks and matching them with satellite imagery from Google Earth, Yemeni Archive was able to geolocate the images and videos posted online showing the aftermath of the attack on Sharis Bridge and determined the location of the attack to be at the coordinates 15.727889 43.639861.

According to a post by the General Corporation for Roads And Bridges official Facebook page, the attack on Sharis destroyed a 20-meter-long portion of the bridge and partially damaged the five lanes on the bridge. This destruction led to a complete interruption in the usage of the road. 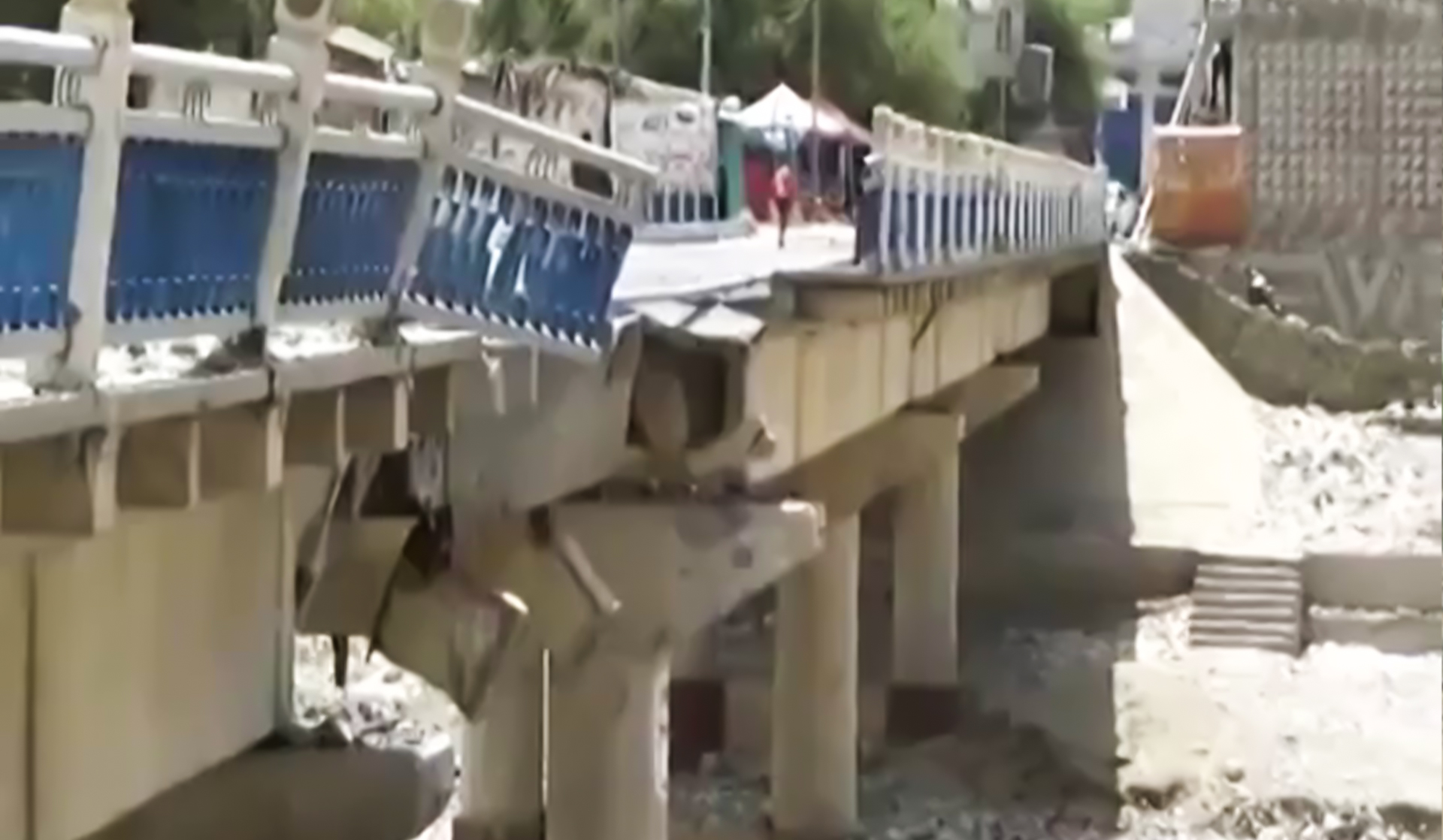 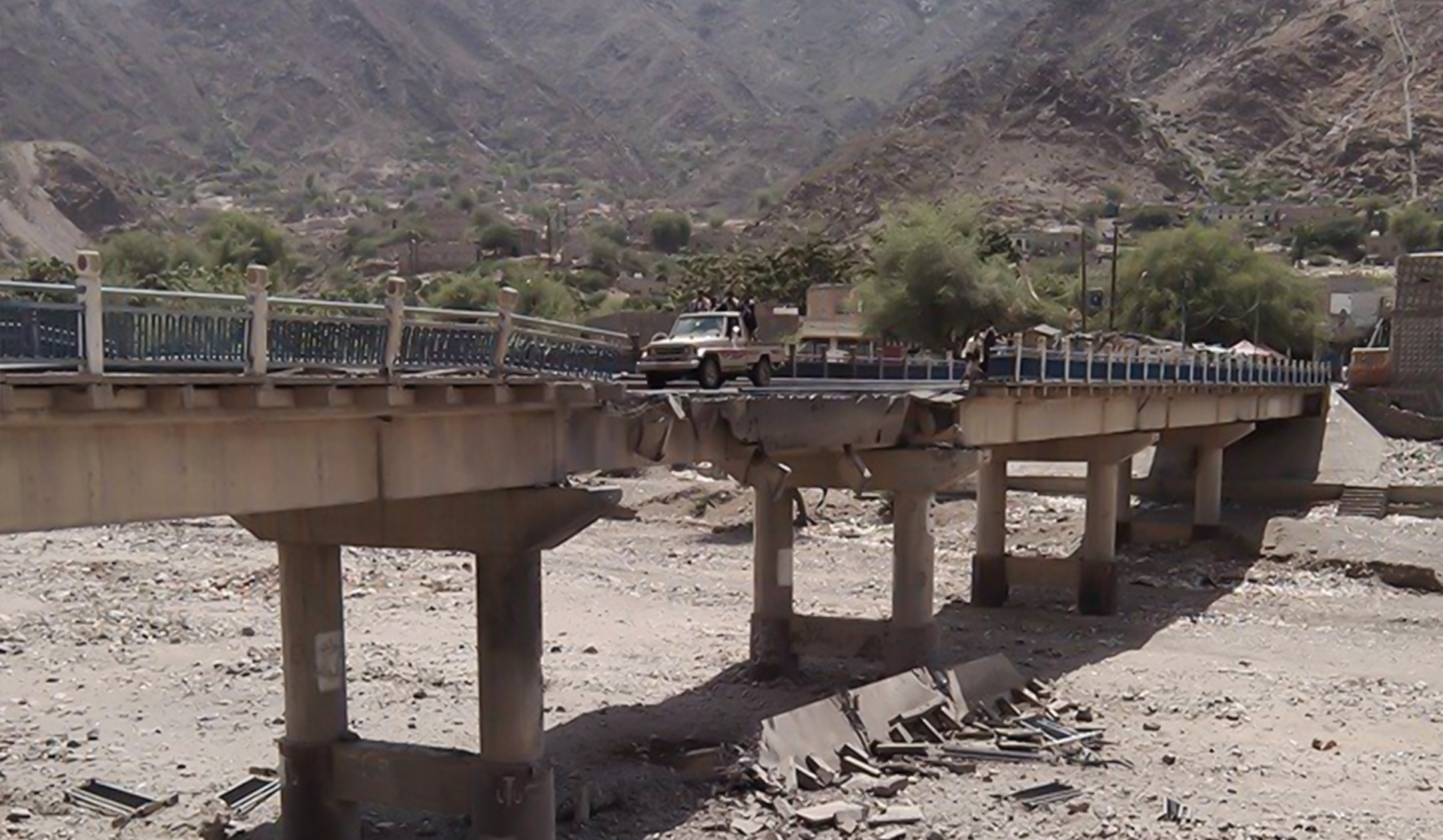 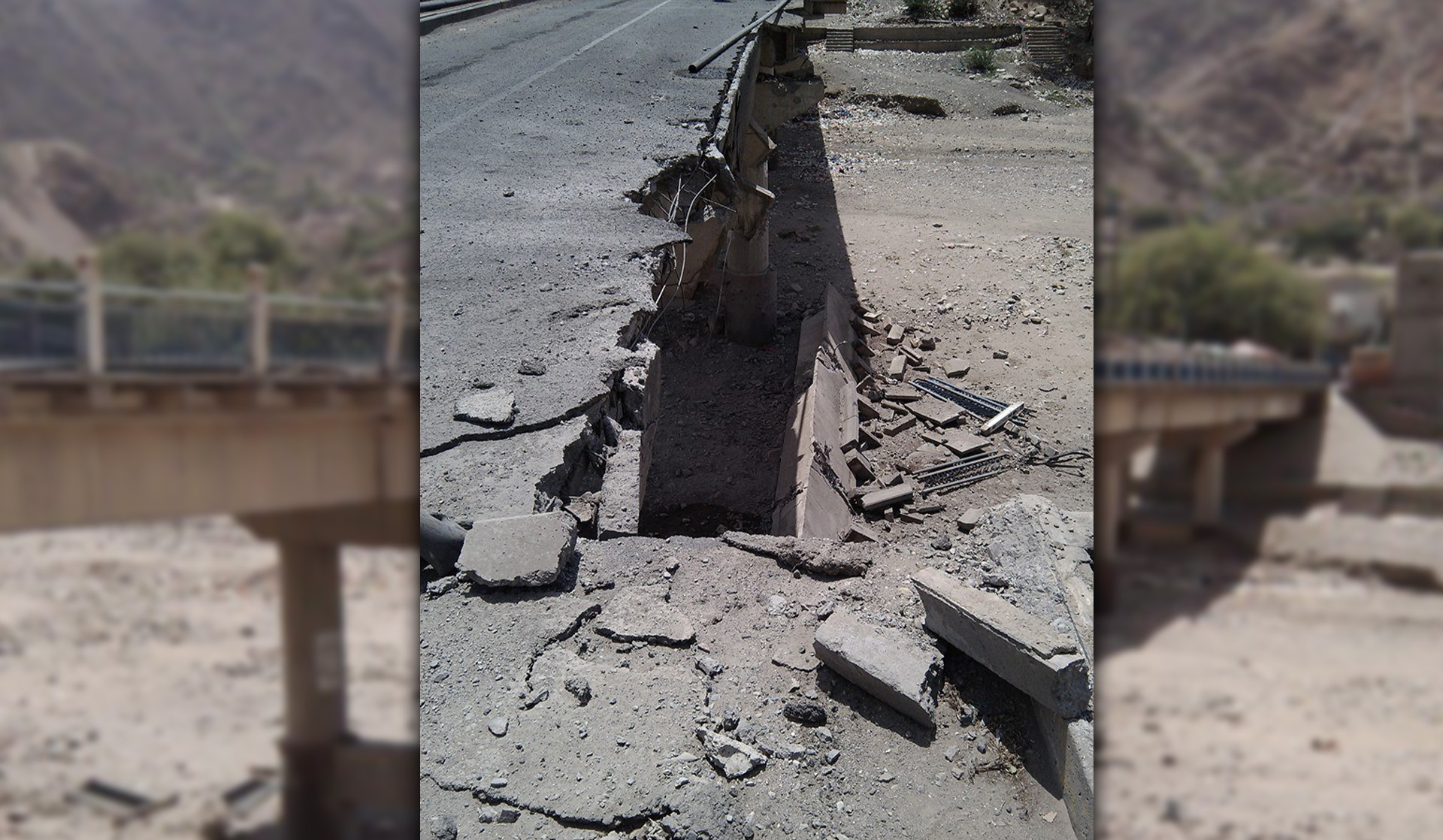 Pictures posted on Facebook from the General Corporation for Roads and Bridges, “Mithaq Al-Sheikhi”, and “Fatimah Almukhtar” showing the destruction from the third attack.

The impact of the attacks on civilians

As a temporary solution, the General Corporation for Roads and Bridges built a secondary road for vehicles and trucks passing through the torrent corridor.

In April 2016, a few months after the alternative road’s construction and during the rainy season, several sources on social media and satellite channels shared video reports showing how torrents from heavy rain destroyed houses near the bridge and swept away everything that stood in the water’s path.

An image from the local source “Amir Sharif”.

Flooding from the rain killed 14 people in the area. Flood water covered the alternative road from the bridge causing a traffic jam. The flood waters additionally swept away a number of vehicles and trucks in its path. As reported by citizens and workers in a video shared by local source Khaled Massad on YouTube, this included the equipment and concrete structures belonging to the Roads and Bridges corporation, which was working at the time to reconstruct the bridge. 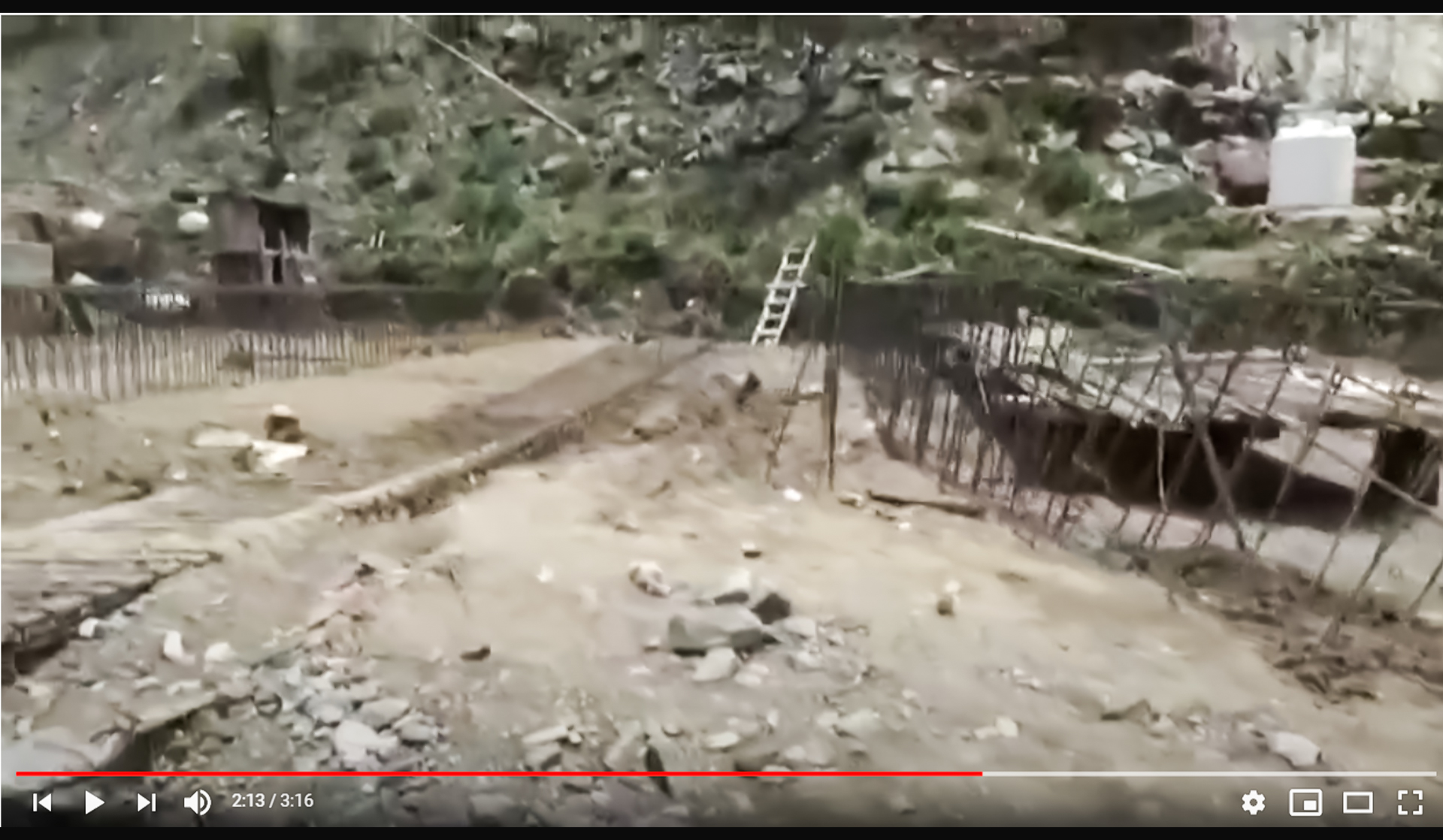 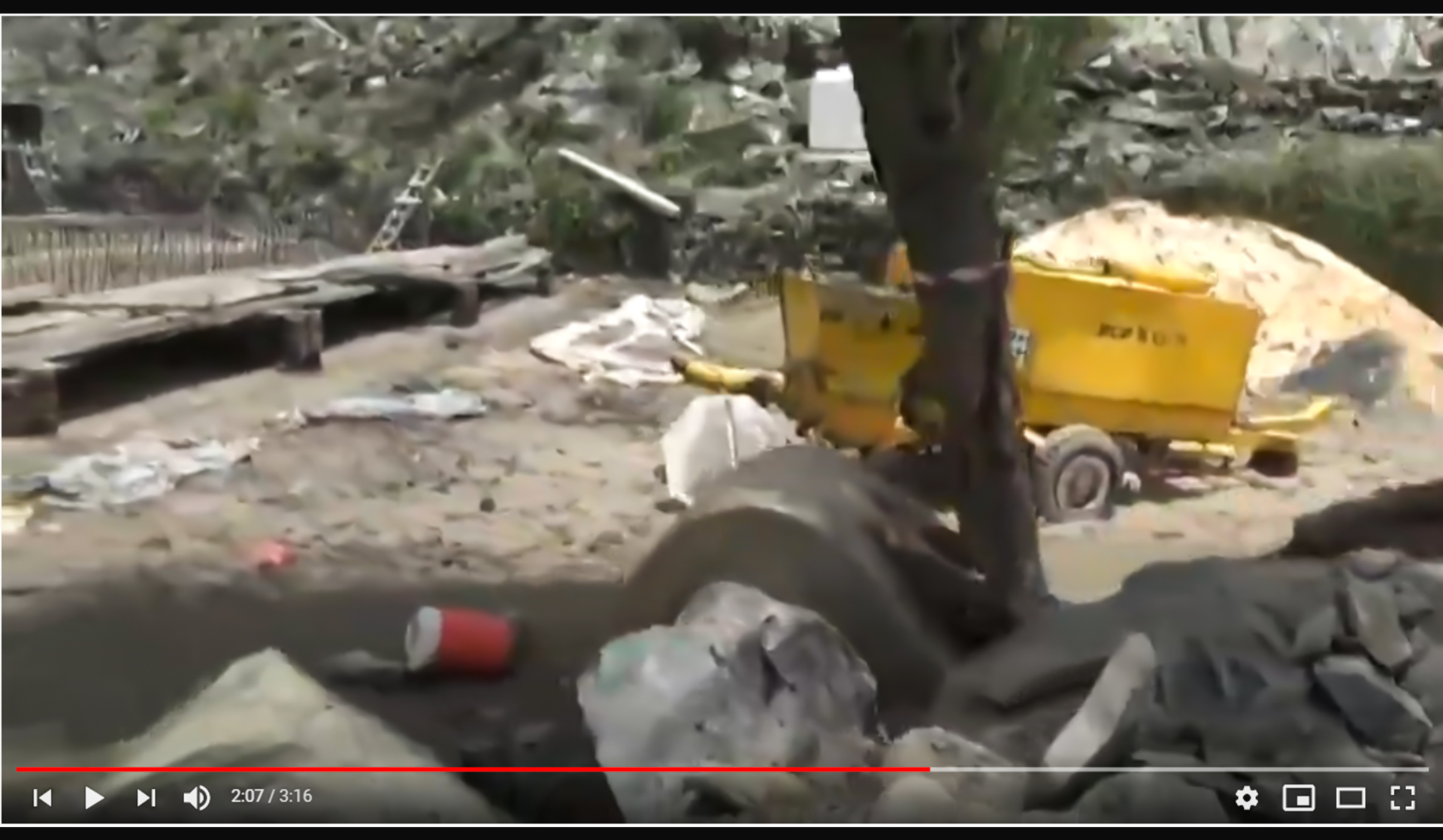 Scenes of the torrential floods sweeping away vehicles were also shared by ”Al-MasirahTV” and ”Abdul Latif Al-Elfy” on Facebook as is shown below. 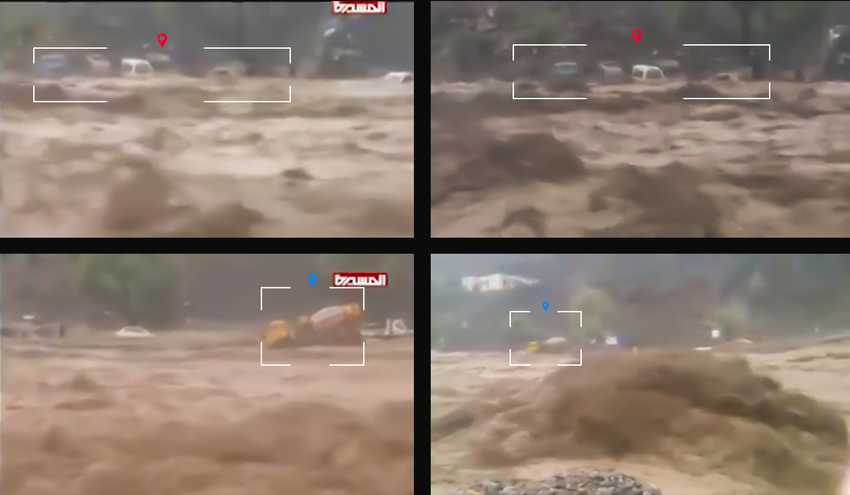 The next day, the “Al Masirah TV” report documented the damage caused by the torrents to the vehicles and trucks of citizens stuck on the road waiting for the torrent to end, waiting vehicles included trucks loaded with household gas cylinders. 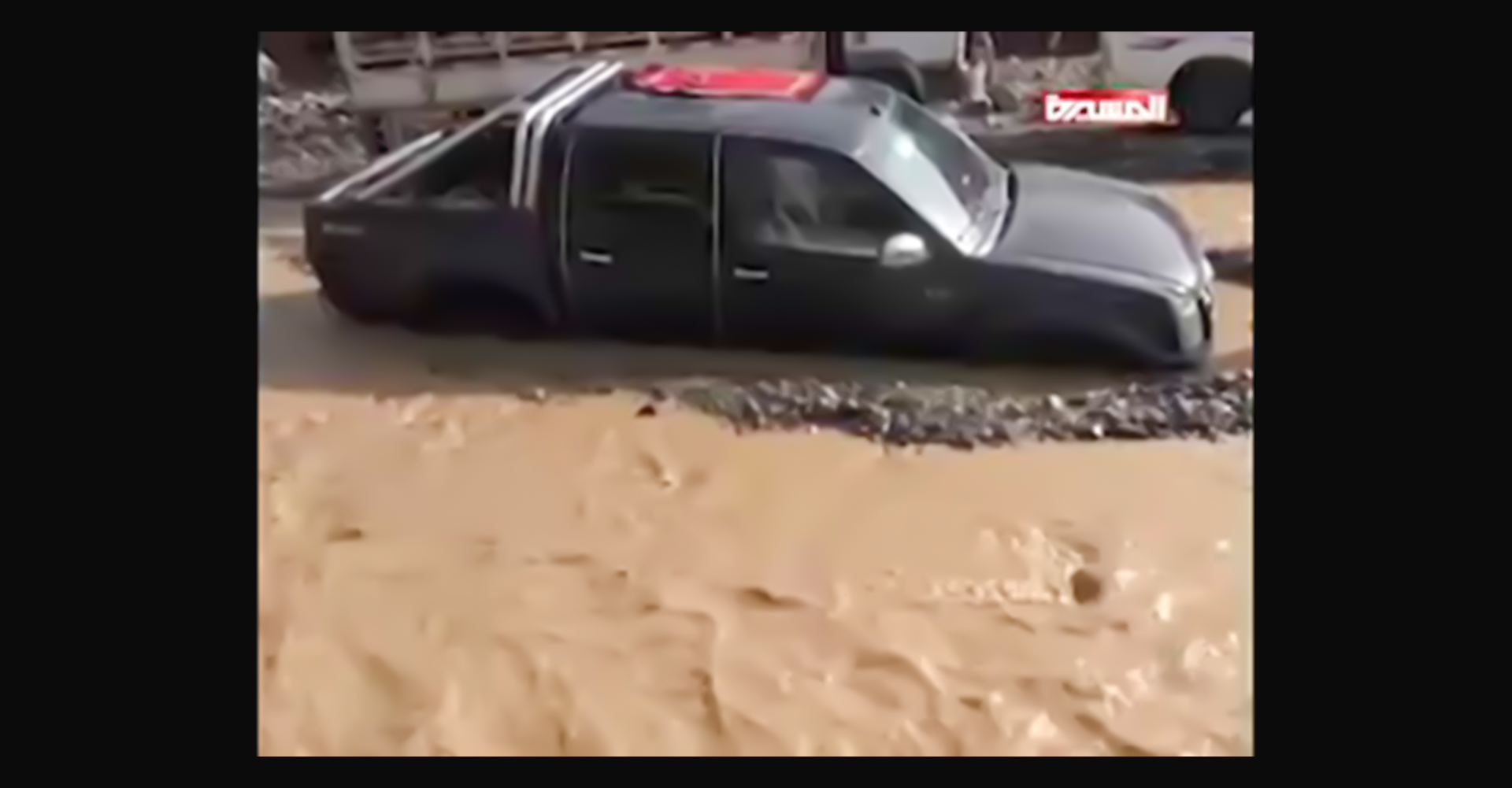 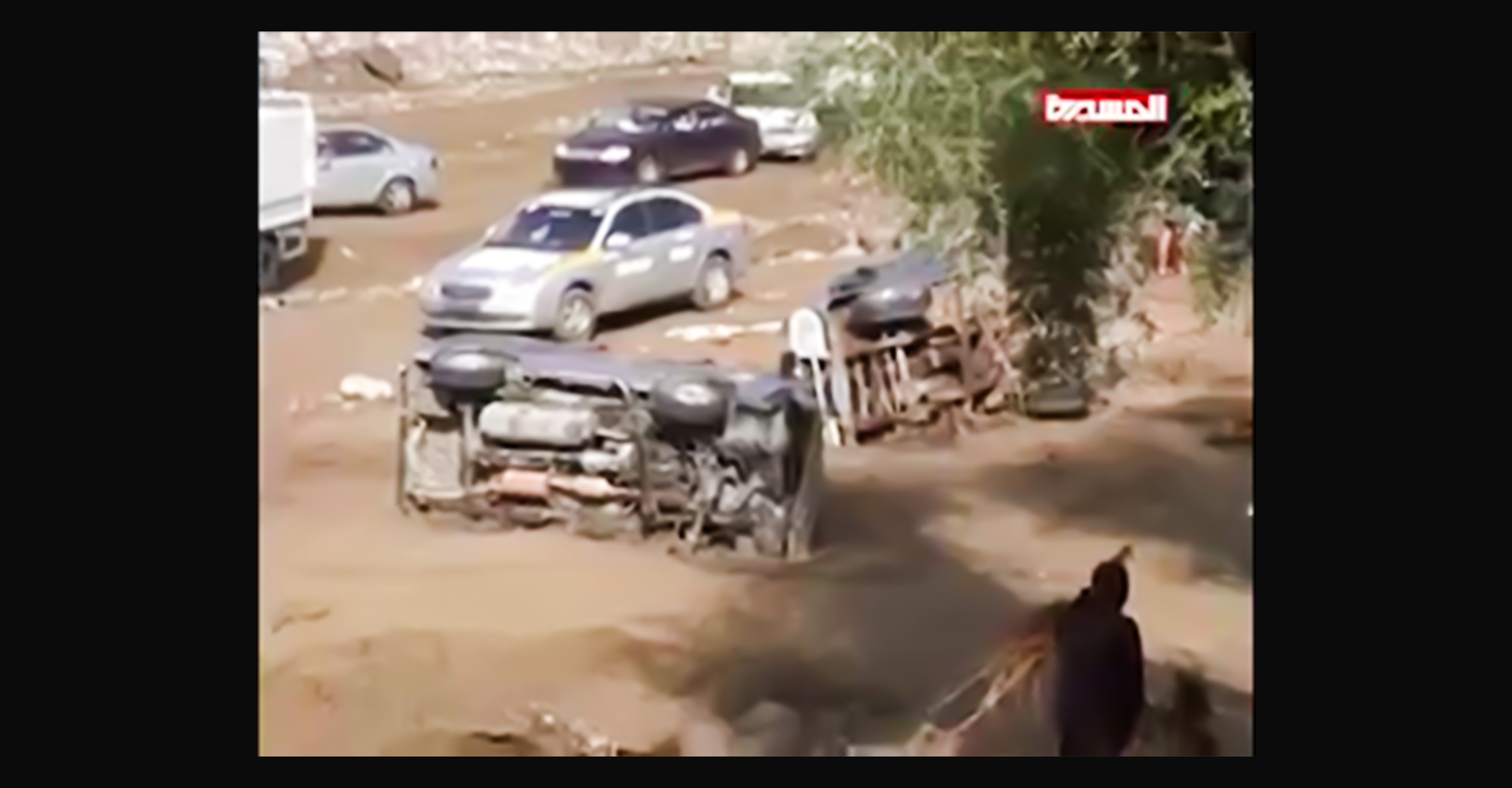 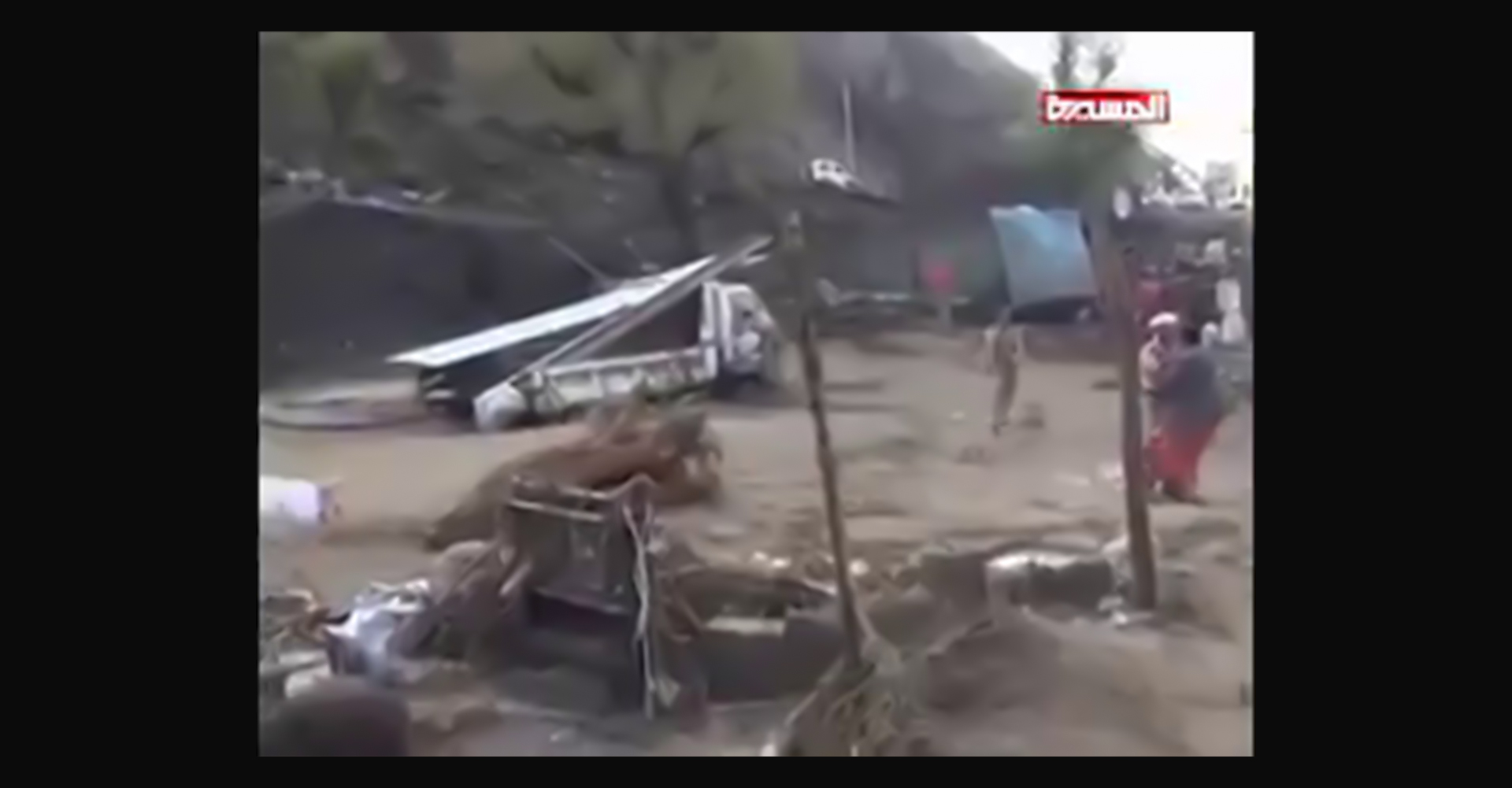 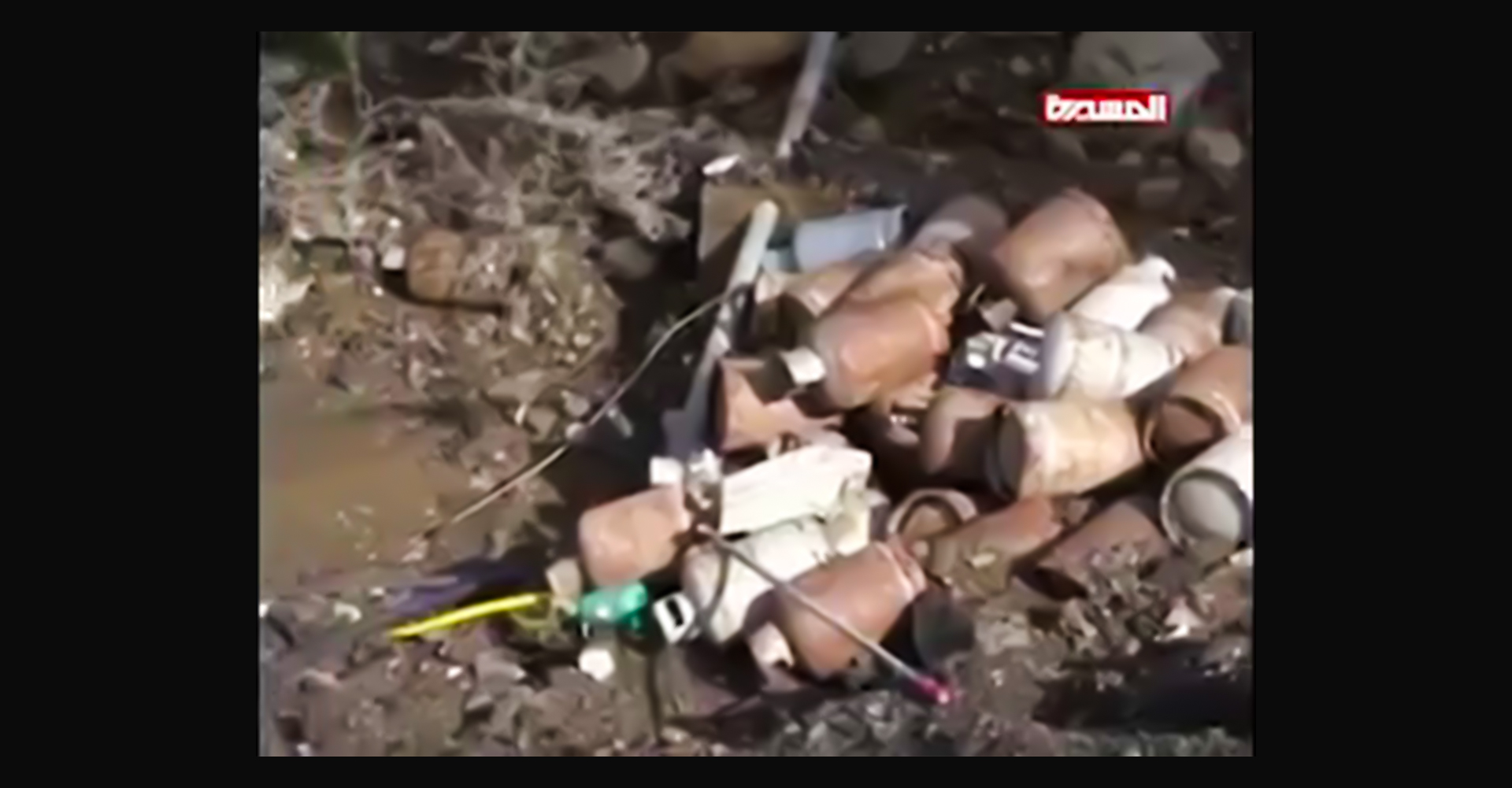 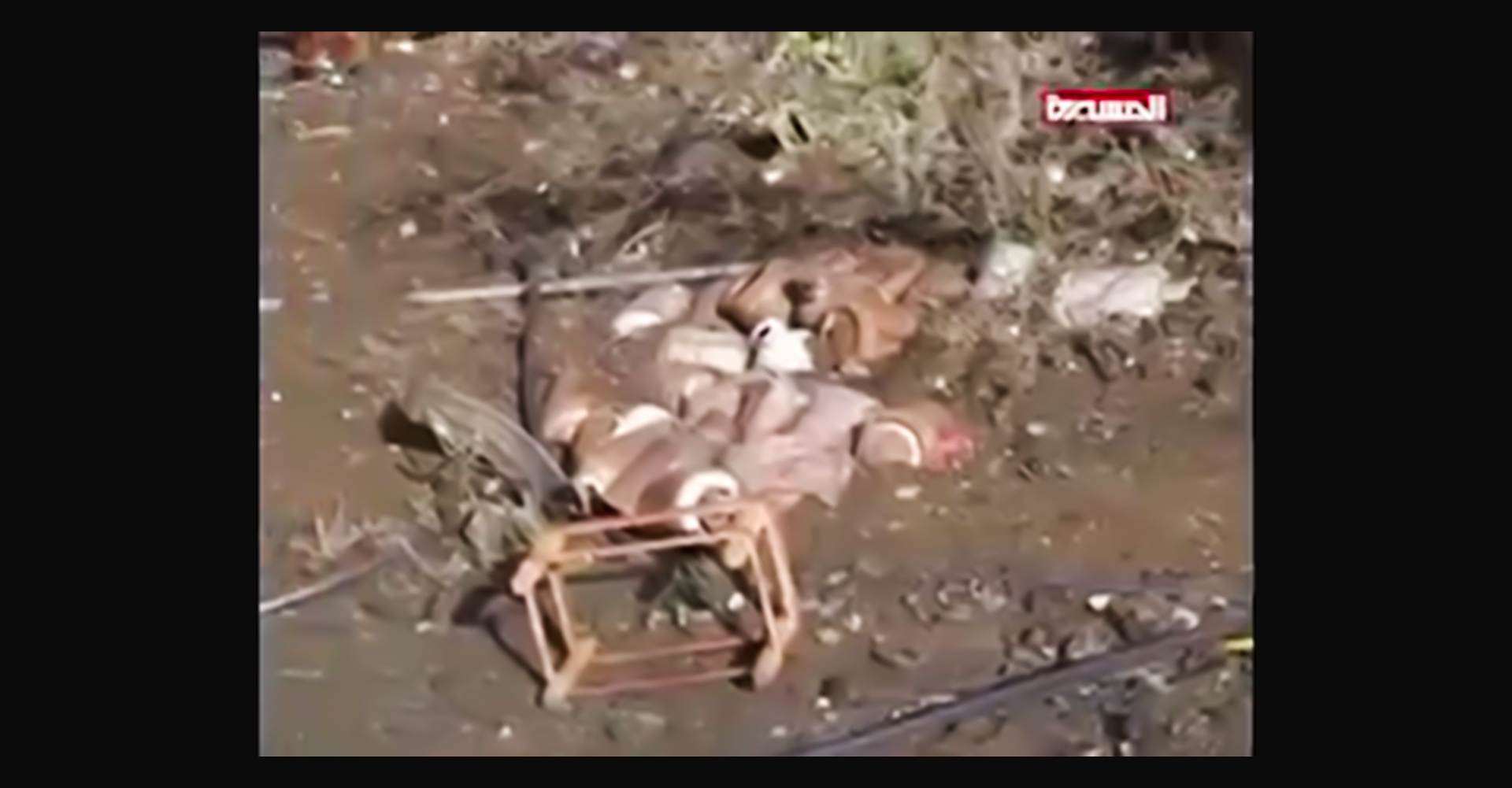 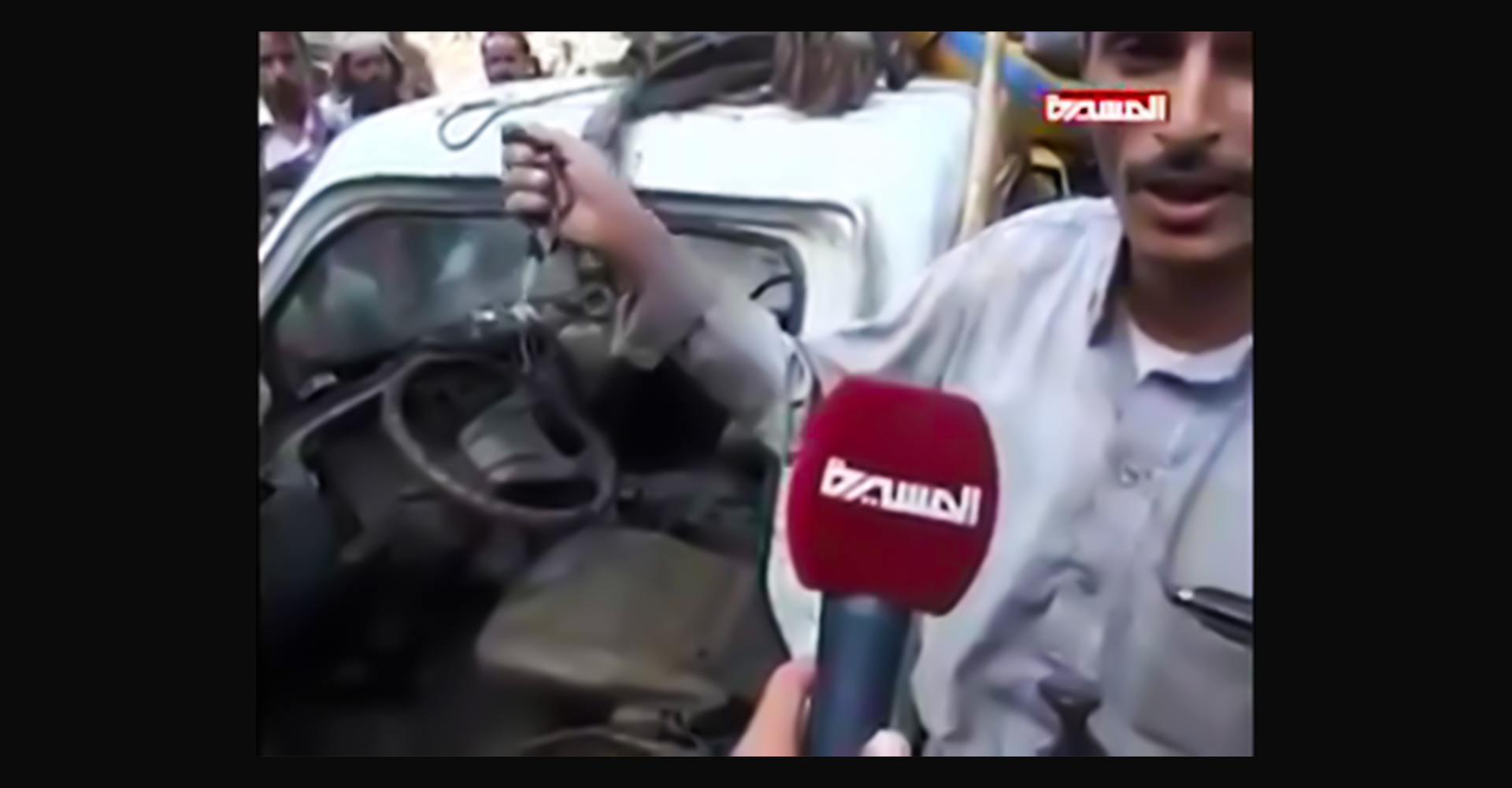 In a video report shared by “Al-Yemen Today TV”, a resident from the area said at 01:14 min: “we appeal to all organizations and authorities to help and provide relief to the people in Sharis who have been affected by the torrents that swept away the houses and the vehicles and trucks that were stuck on the road as a result of the airstrikes on Shari’s bridge on the side of the valley.” He added, “the vehicles were stopped on the side of the torrent road until it ended, but the torrents were larger than expected and swept away many cars, transporters, and equipment.

Several stills taken from the Yemen Today TV video showing vehicles parked on both sides of the bridge after their passage was cut by the torrents.

One of the travelers said in the same video at the min 02:40: “we are travelers heading to Sana’a, carrying vegetables and fruits, and we are now stuck on the Sharis – Hajjah road due to the torrents that cut off the road and swept away some trucks and citizens’ possessions. And we are now stuck here because the bridge was attacked.” The resident also attempted to appeal to officials to fix the road so people, patients, fruits … etc, can pass.

From late February to early October, the rains in Yemen are considered monsoon rains. The rainfall is highest in the central mountainous region with annual rainfall between 400-1100 mm and an annual average close to 750 mm. According to the Yemeni Civil Aviation and Meteorology Authority report, the Sharis area has the highest number of rainy days in Yemen with an annual rate of 94 days per year. This rate can sometimes reach more than 156 days per year.

Multiple sources, such as Al-Yemen Today Channel report, the documentation of the Saudi crimes in Yemen, the Motabaat new site, and the Yamanioun news site, reported that the attack on Sharis bridge on September 15, 2015 killed 10 people and injured 13 others.

Weapons used in the attack

After analyzing the open source visual content and searching for remnants of ammunition that may have been used in the targeting, Yemeni Archive was able to find, in a video shared by “Yemen Today TV” after the first attack on September 15th, visuals of a piece of metal that appears to belong to a missile. However, Yemeni Archive was unable to determine the exact type of ammunition used in the attack due to the lack of evidence and images. Only small unidentifiable remnants of the ammunition used in the attacks were shown in the open source visual content published after the attack. 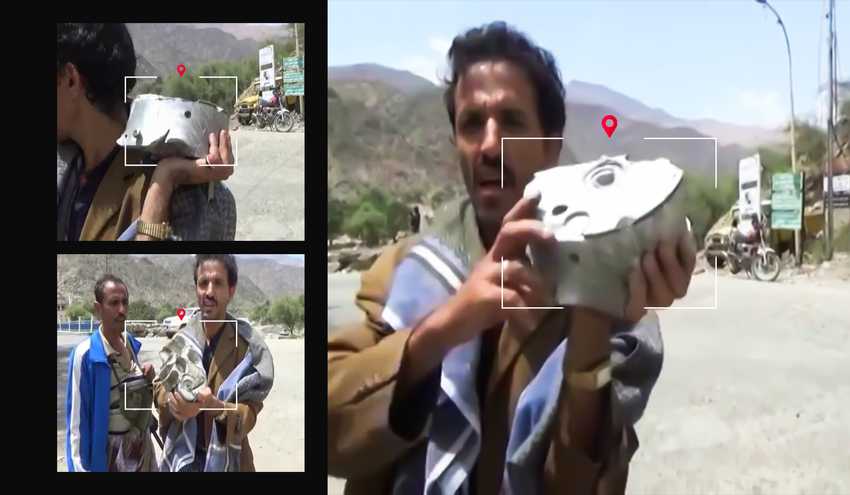 Nevertheless, photos published by the local source “Fatimah Al-Mukhtar” on Facebook reveal two craters in the upper and lower concrete structures of the bridge. These craters feature traces on the asphalt from four directions, most likely from the wings of a missile. These craters indicate that the attack was likely carried out by a powerful missile launched from a warplane.

After verifying and analyzing open-source information, the Yemeni Archive team concluded that Saudi-led coalition warplanes carried out three separate attacks on the Sharis Bridge in Sharis district of the Hajjah governorate between September 15 and September 23, 2015. In total, these attacks killed 18 people and injured more than16 others. The airstrikes destroyed a 20-meter portion of the bridge cutting off the Hajjah road. This forced civilians to build a temporary, rough alternative road that is often covered by torrents during periods of heavy rain. With the bridge out of service, torrents washed away many vehicles and impeded the movement of citizens for months after the attacks.