In October of this year, Yemeni archive published a new report ”Attacks on Access”, documenting 131 attacks on bridges in Yemen between 2015-2019.

Yemeni Archive gathered open source information available on the Internet that published news related to two incidents on the Muqasam Selahah bridge in the Al-Ahjar area of the Shibam Kawkaban District in the Al Mahwit Governorate within one week. The first attack happened on October 31, 2016 and the second attack happened on November 7, 2016. The bridge is located on the 303 highway, which connects the Sana’a, Al Mahwit, and Al Hudaydah governorates.

The attacks destroyed the bridge and forced it out of service, in an area that has not witnessed any clashes or military presence since the start of the war in March 2015. These attacks had a direct impact on civilian lives and necessary aid deliveries during the war. After the attack, residents were forced to build an alternative road adjacent to the bridge as there was no other road in the area.

The Muqasam Selahah bridge is located in the Al-Ahjar area of the Shibam Kawkaban District in the Al Mahwit Governorate on the main road connecting the governorates of Sana’a, Amran, and Al Mahwit with the western coastal governorate of Al Hudaydah. Along the road to Sana’a, there are many small bridges, 7 km away from the capital governoate’s administrative borders that are extremely important for food and medical supply delivery as well as for civilian travel. The attacked bridge is located at a narrow road that has been built on a mountain in order to ease the passage and movement of citizens and goods between governorates. The area around the bridge is hilly and ​​ difficult to navigate as shown in Google Earth’s terrain view. 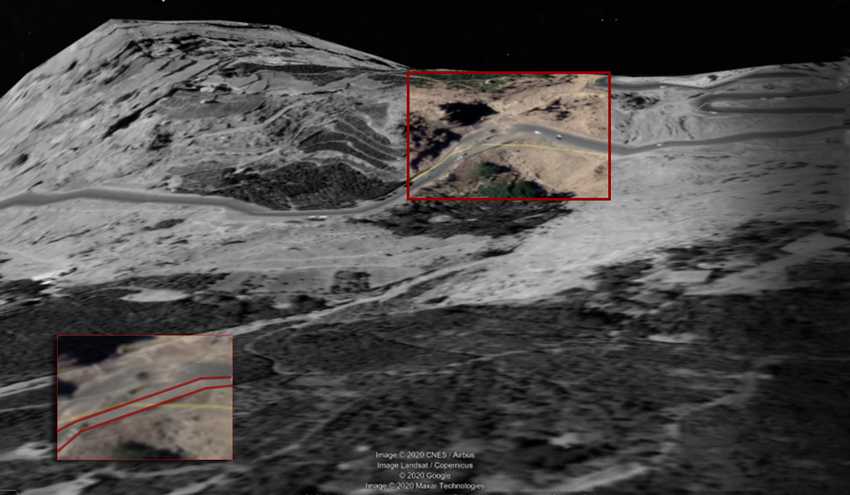 An Image of the bridge from ground level via Google Earth

Open-source information indicates that the Muqasam Selahah bridge on the main road connecting the Sana’a, Al Mahwit, and Al Hudaydah governorates was attacked by several airstrikes with two incidents within one week between October and November 2016.

After searching for social media posts reporting of an attack, Yemeni Archive was able to find the first posts online alerting of the airstrikes on the bridge. One of the first alerts was a post on October 31, 2016 by the ”Yemen Life News”, an independent Yemeni news site on Facebook, at 00:15 after midnight local time, according to the results of the TimestampConvert tool.

A picture of the first claim by ” Yemen Life News ” on Facebook about the incident.

Fifteen minutes later, the local source “Saddam Al-Sayyadi” posted on his personal Facebook account a picture taken at night showing a crater, which he claims is on the targeted bridge. A few minutes later, the same image was also shared by the ”Where is the explosion now?” Facebook page.

On the same day, the Yemeni News Agency “Saba” published a news report, mentioning that the bridge had been targeted by two airstrikes. The news agency additionally reported that the airstrikes destroyed the bridge serving the Al Mahwit - Sana’a Road.

A picture from Saba News Agency about the incident

After analysing the timestamp of the ”Yemen Life News” post on Facebook, Yemeni Archive was able to confirm that the attack occurred at 12:15 AM local time.

A week after the first attack, on November 7, social media posts, news websites, and TV reports stated that the Muqasam Selahah bridge was attacked again by several airstrikes. The first post online alerting of the attack was a tweet published by a local source, ”Al-Mihdhar Shafi Jrouha,” on Twitter at 23:28 local time.

A screenshot of the first claim by “Al-Mihdhar Shafi Jarouha’s” on Twitter about the incident.

About eight minutes after “Al-Mihdhar’s” tweet, a local source, “Abdullah Hizam Suleiman,” posted on his personal Facebook account an image taken at night that allegedly shows a crater on the targeted bridge. Abdullah Hizam Suleiman also posted another picture of the crater later at 00:46 AM. 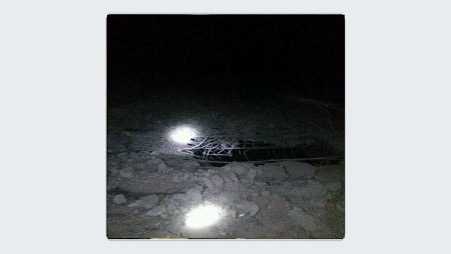 The picture shared by “Abdullah Hizam Suleiman” on Facebook about the incident.

“Abdullah Hizam Suleiman” mentioned in his second post, at 00:46, that the attack was an hour before he published the photo. Comparing “Suleiman’s” reported time with the first post online alerting of the attack (posted at 23:28), Yemeni Archive was able to confirm that the attack occurred between 23:00 - 23:30 local time.

Yemeni Archive created a panoramic image, using the ”Al-Masirah TV Channel” video published after the first attack, showing the geographic landmarks visible from the northern side of the bridge. These landmarks include a mountain range that matched with terrain level satellite images taken from Google Earth. 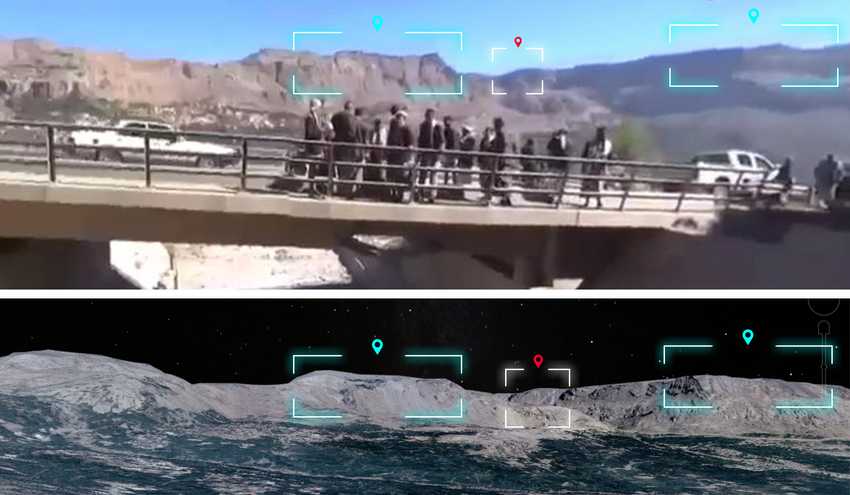 A Panoramic image from the Al Masirah TV channel, and the satellite image via Google Earth

Taken in the same direction as the Al Masirah TV report stills a picture was published on the ”Yemeni Press” news site showing a few houses in the middle of a valley, behind a large rock. Satellite imagery from Google Earth clearly shows these landmarks. 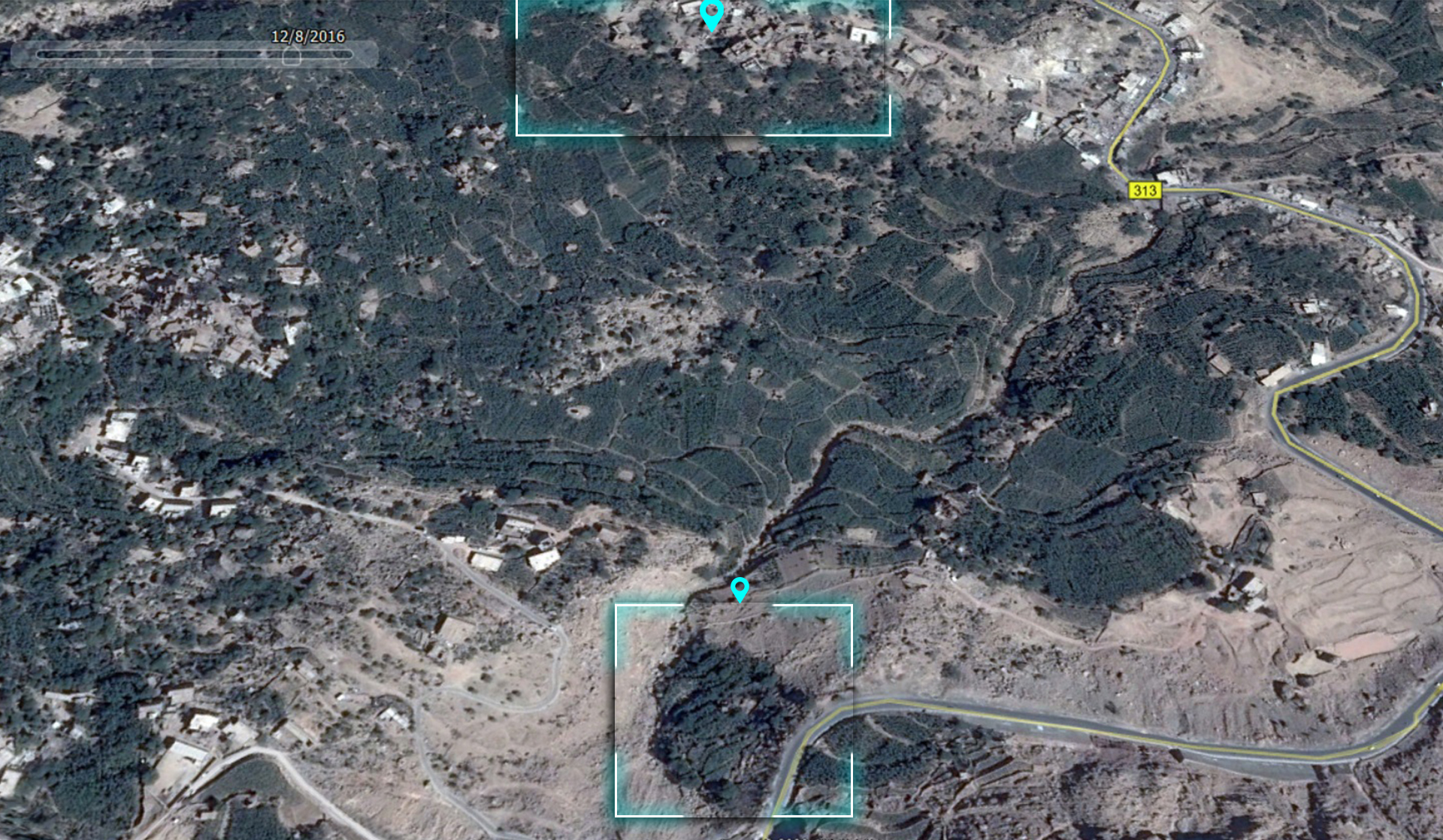 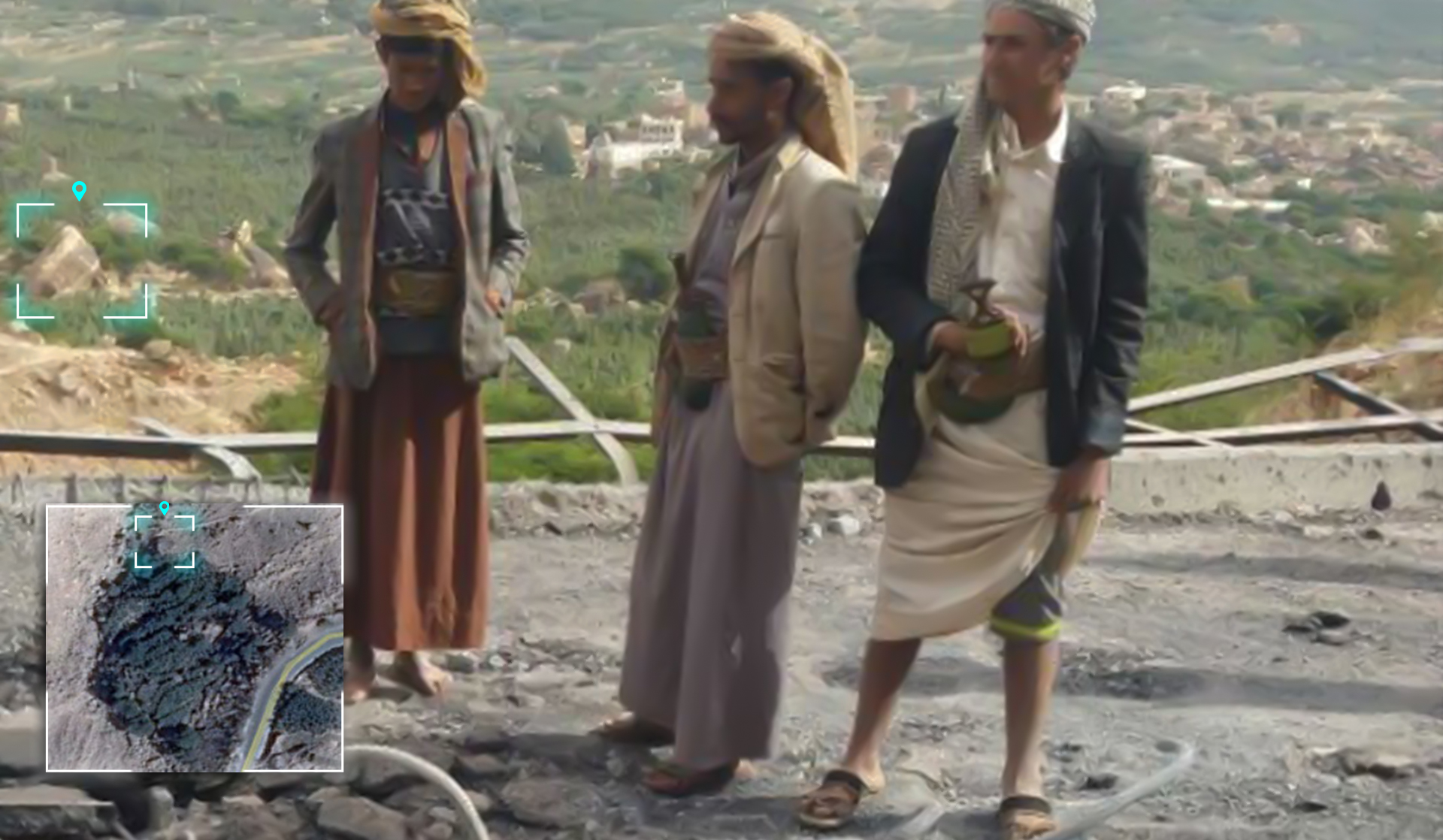 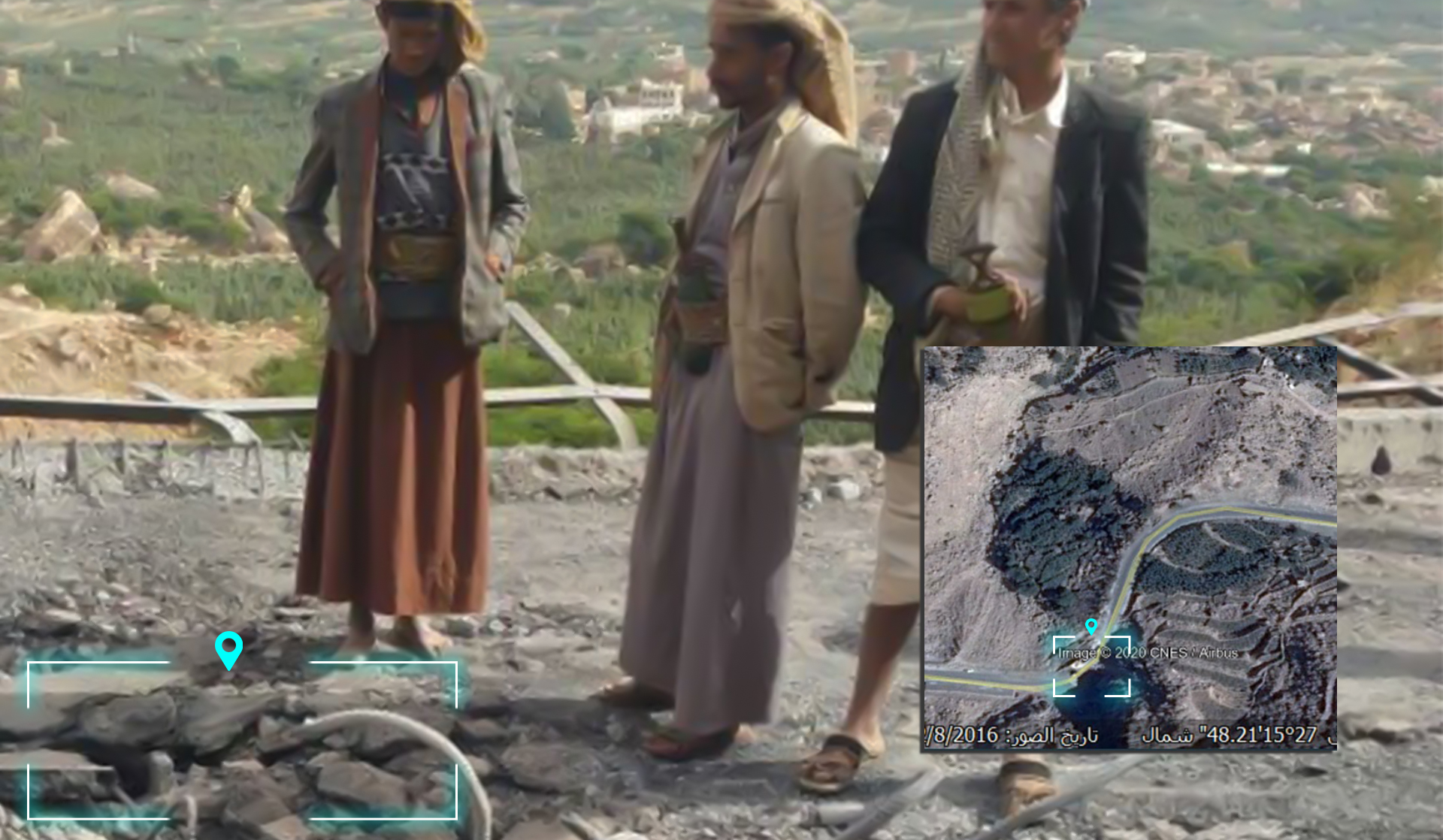 Additional landmarks confirm the location of the two attacks. As shown in the comparison below, a stone building further along the road is seen in multiple videos and images taken around the bridge. 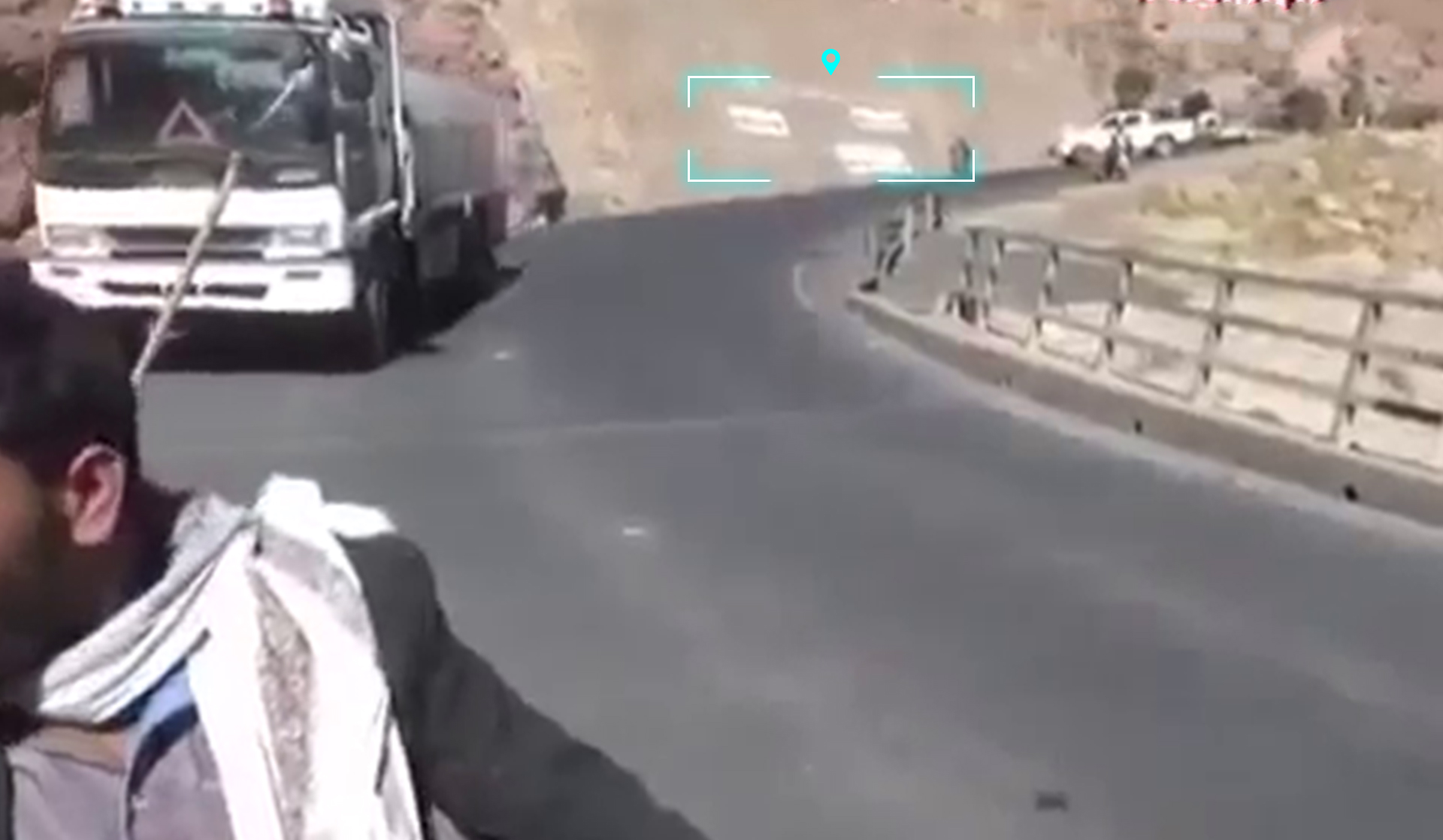 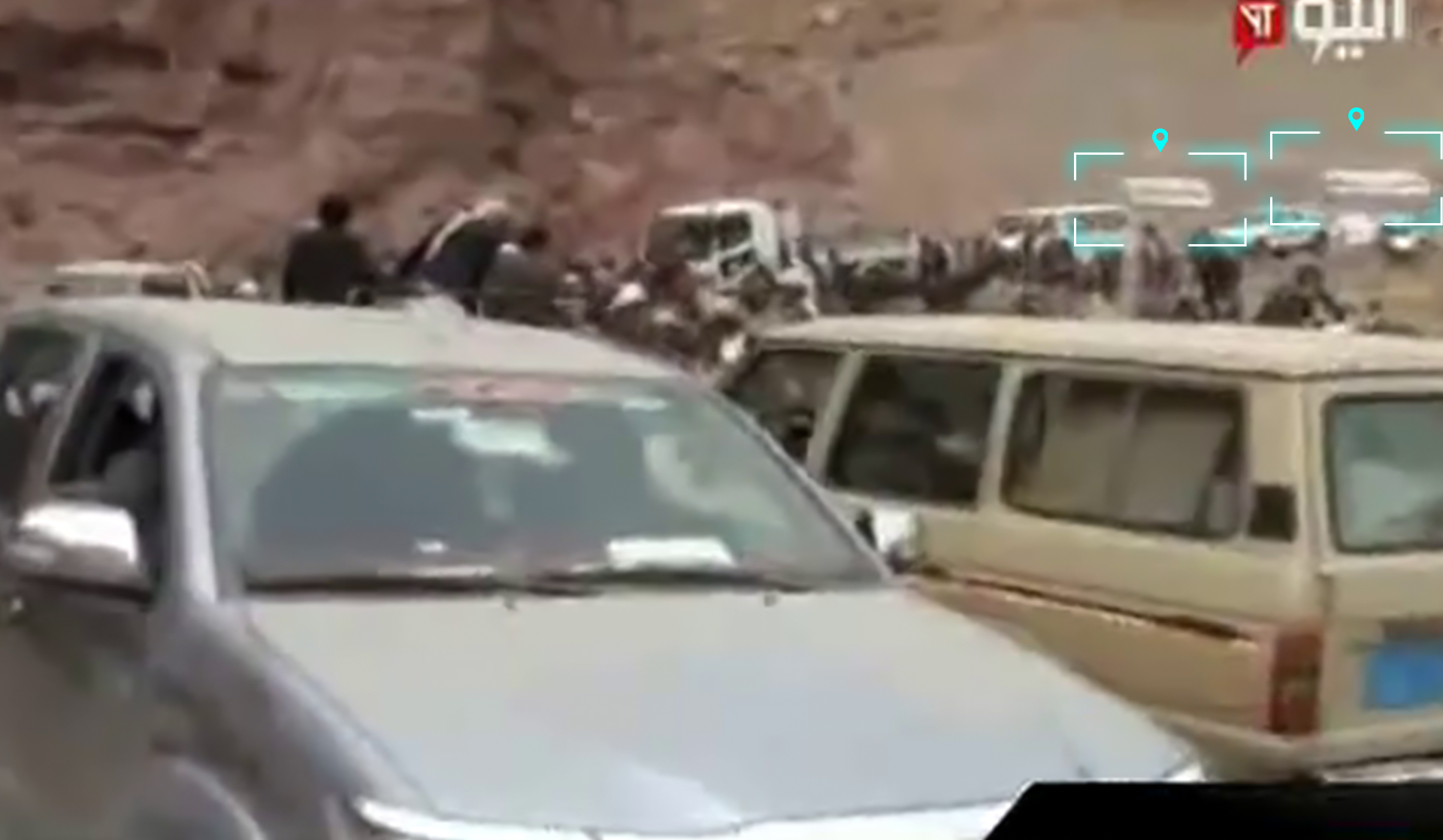 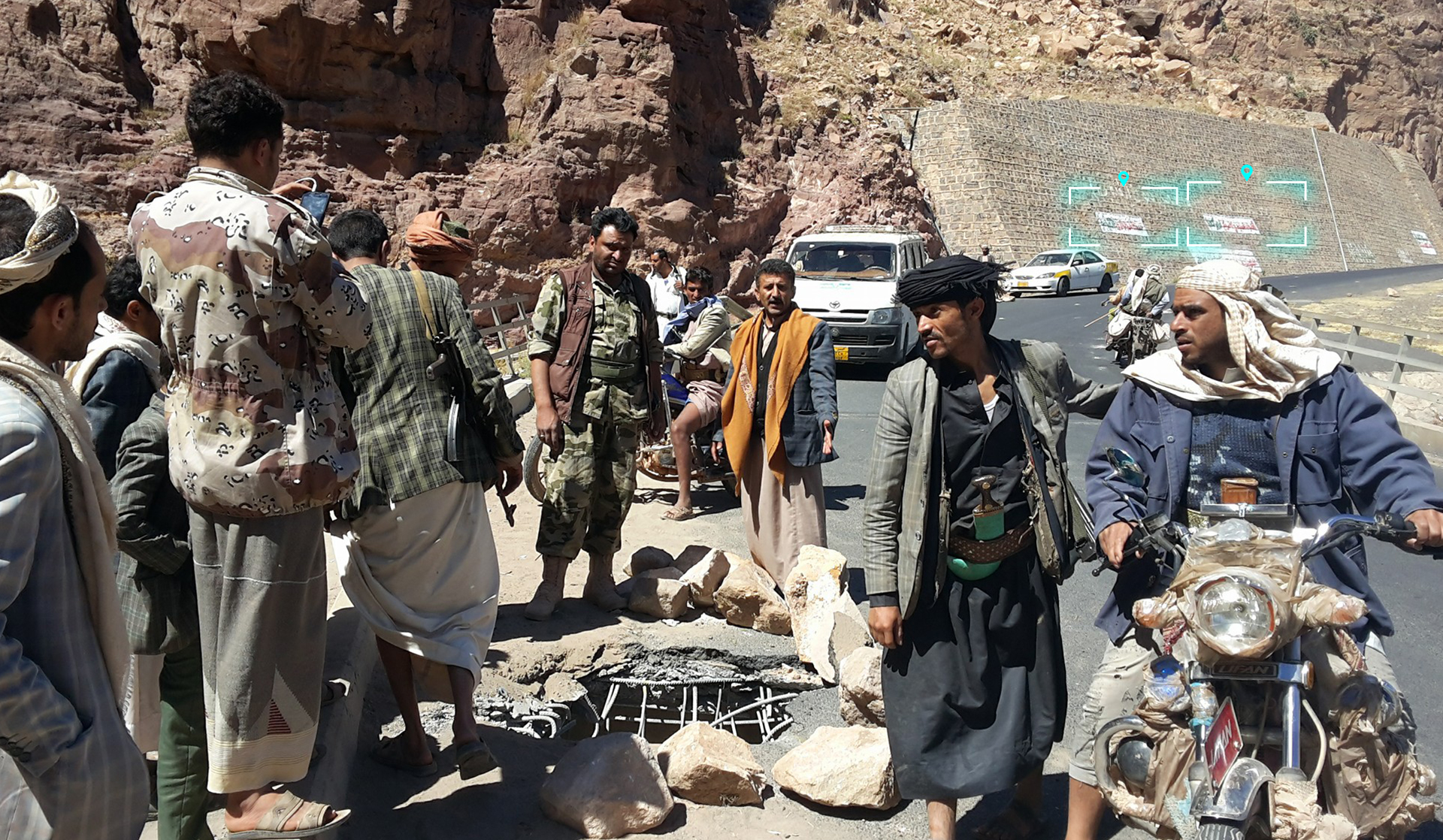 From the opposite direction of the stone strcuture, other matching landmarks can be seen in the videos and pictures posted by Yaman Today TV Channel, Abu Muhammad Muhammed Musaed, and Al-Hudhud news site. As shown in the comparison below, a small rockside on the side of a mountain adjacent to the bridge is seen in multiple pieces of media posted online further corroborating the identified location of the bridge. 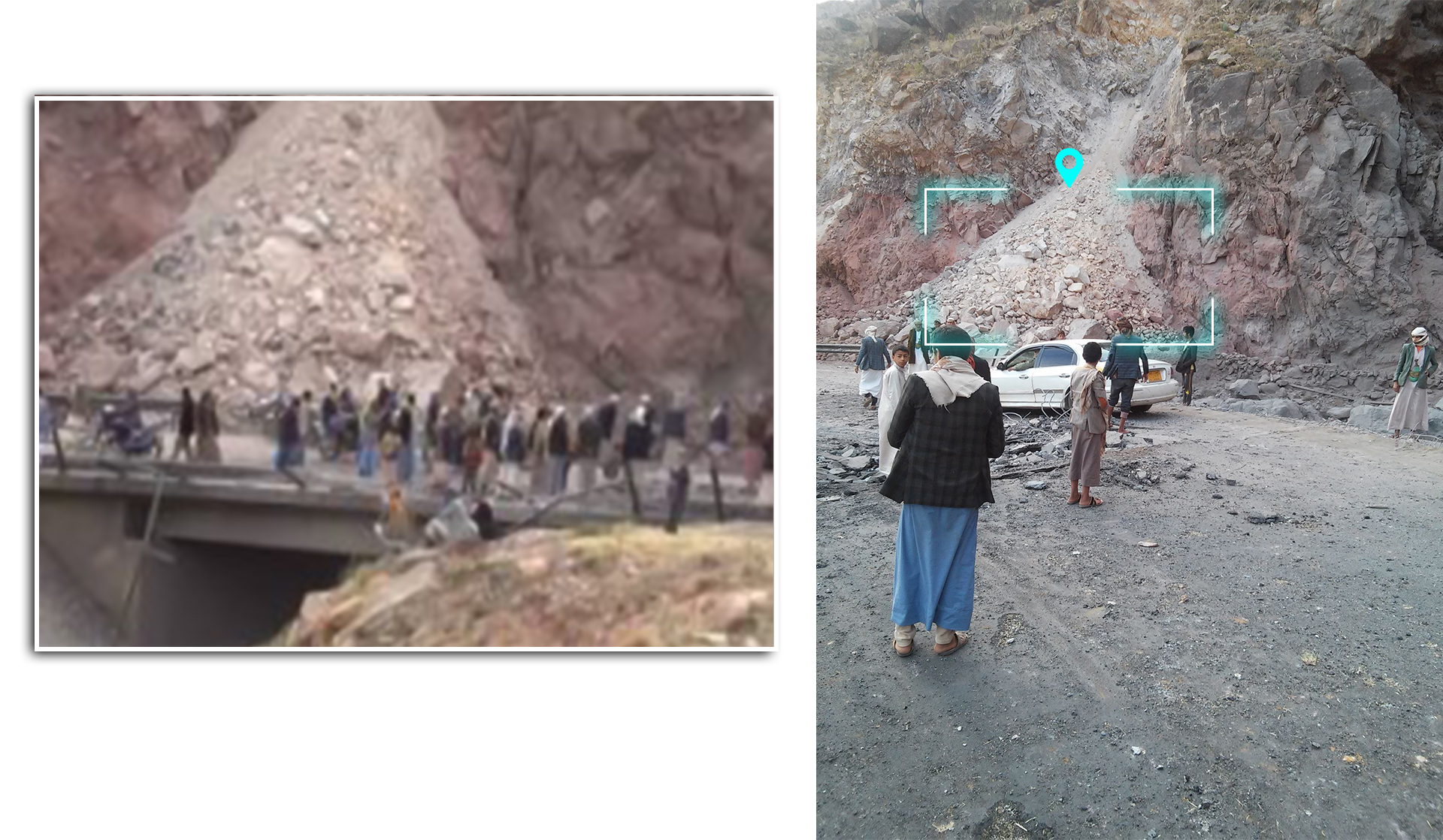 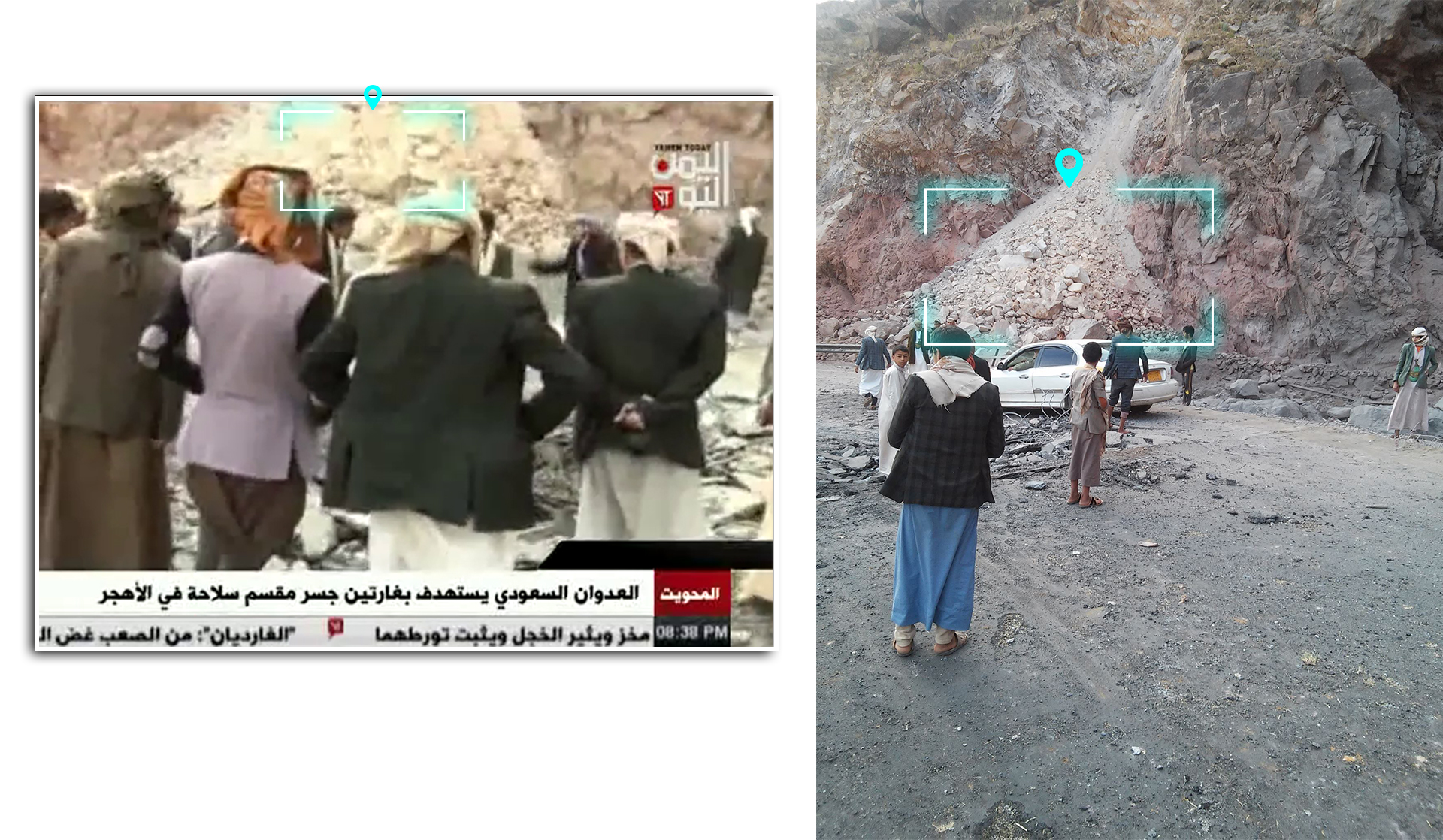 After analyzing geographic landmarks and matching them with satellite imagery from Google Earth, Yemeni Archive was able to geolocate the images and videos posted online showing the aftermath of the attack and determined the location of the attack to be at the coordinates 15.461795, 43.858825 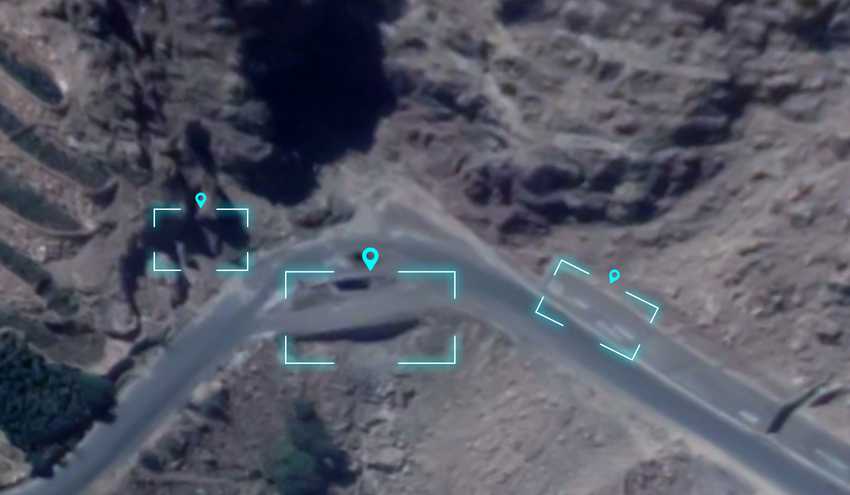 By the afternoon, Al MasirahTV published a video report on their YouTube channel, showing the scenes of destruction on the bridge. A local source, ”Amin Saleh Al-Qahhali,” also posted photos and a video of the damaged bridge on his personal Facebook account. Yemeni Archive was able to match the picture taken at night with ones taken during the day. 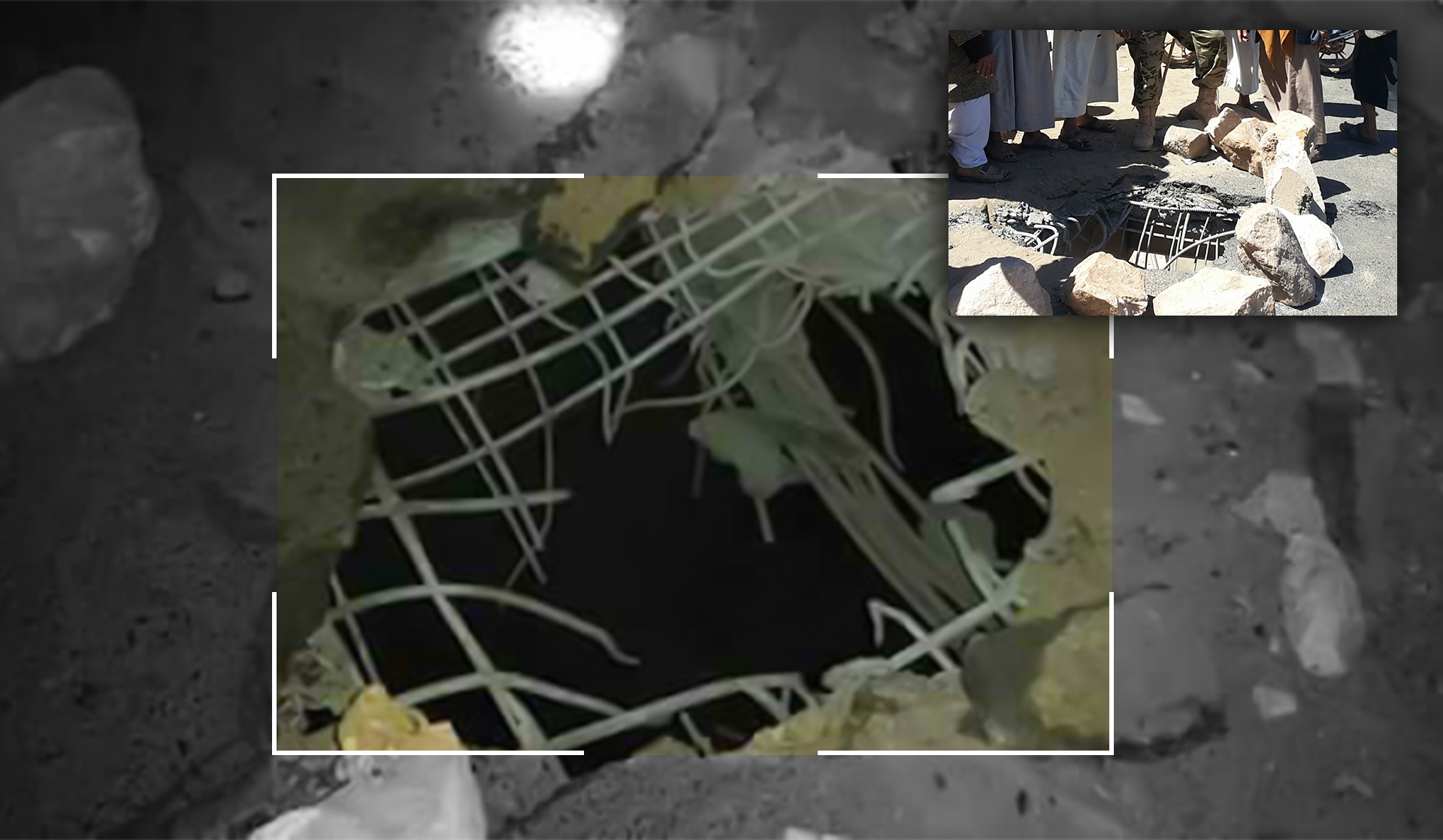 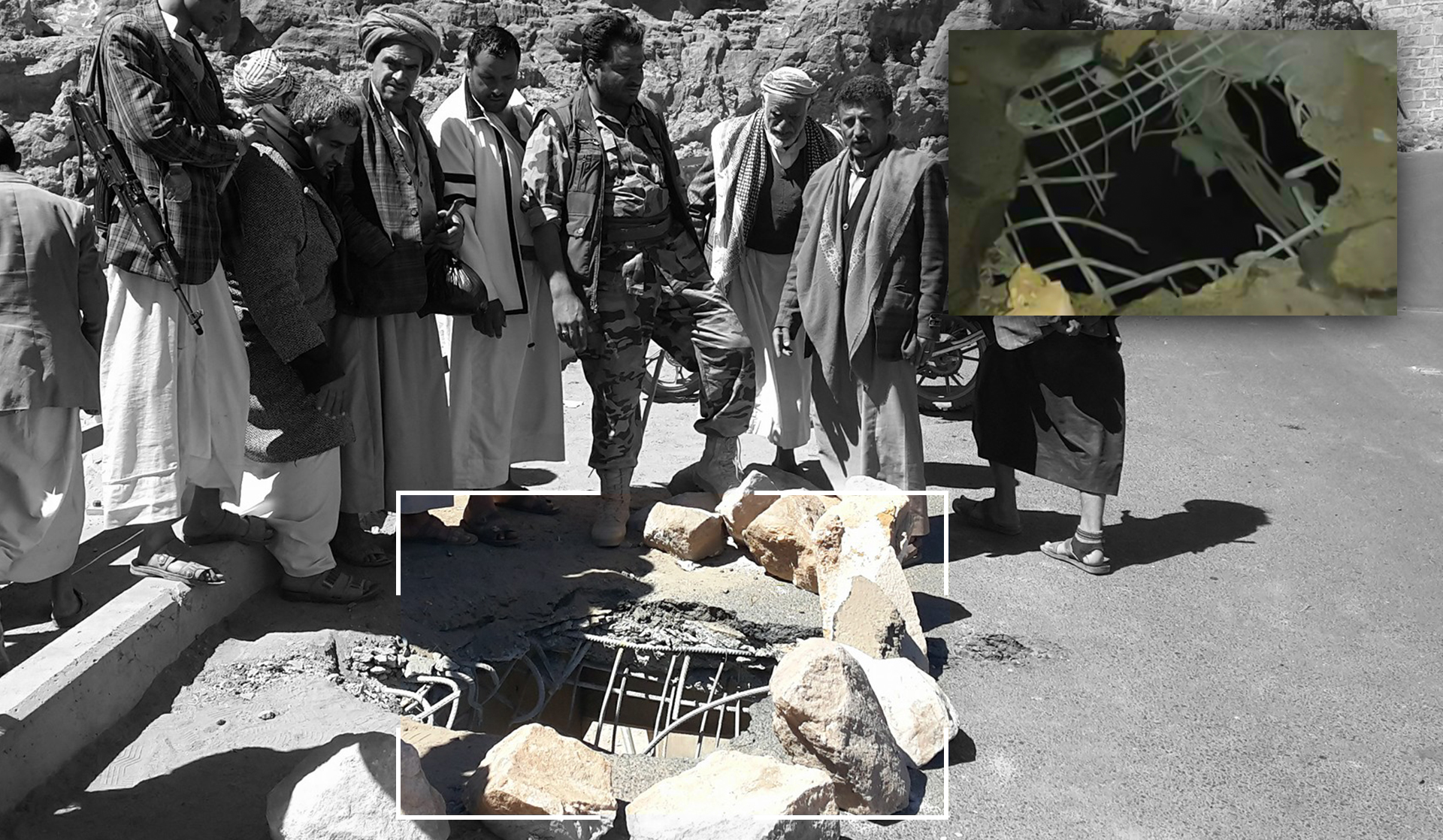 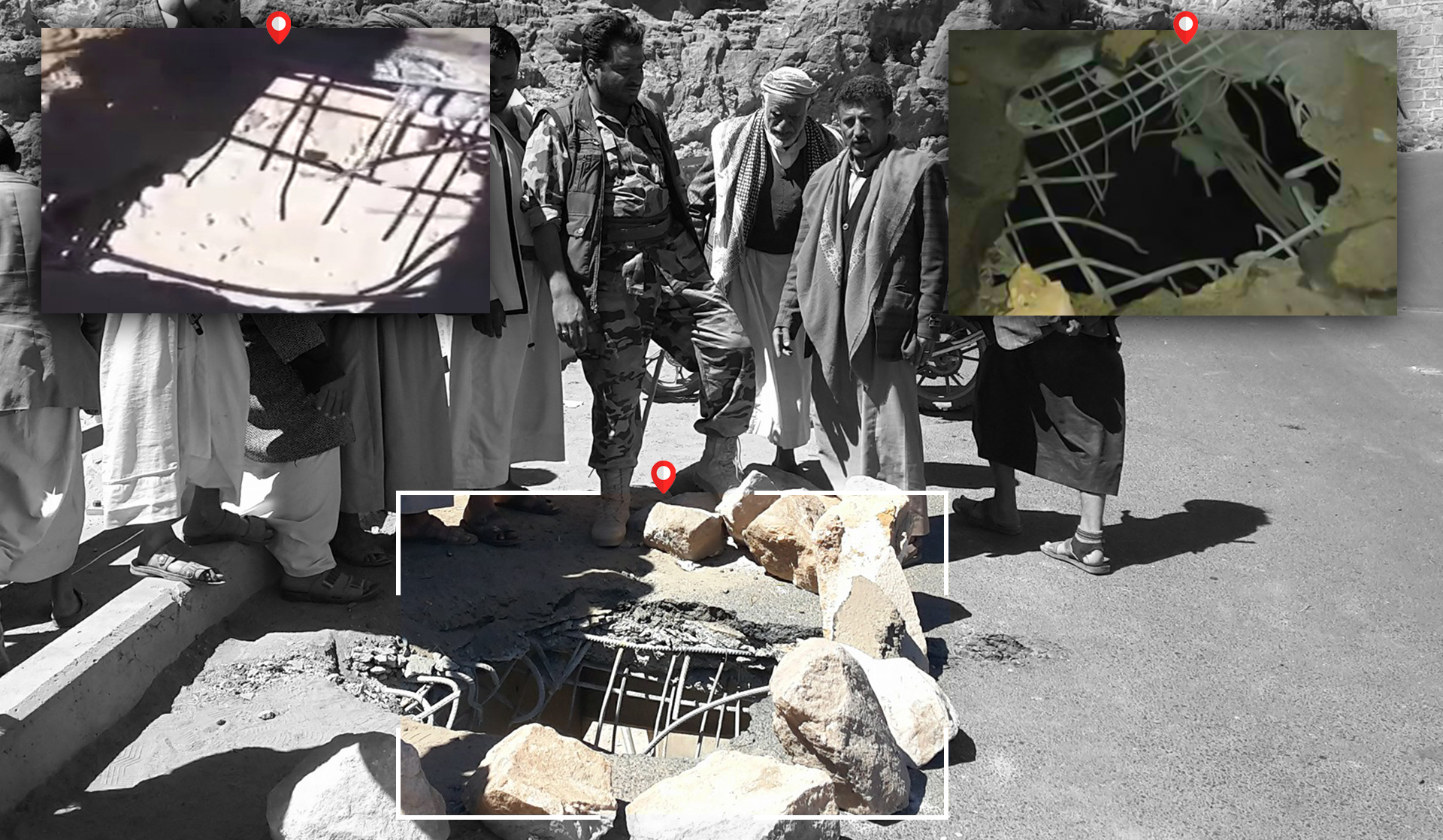 Several images shared by the two local sources “Saddam Al-Sayyadi” and “Amin Saleh Al-Qahali” on Facebook, and a still image from the “Al-Masirah” TV report

Taken at a different angle, the image shared by “Abdullah Hizam Suleiman” on Facebook was identical to the picture published by the “Yemen Press” news site the following day as the comparison below shows. 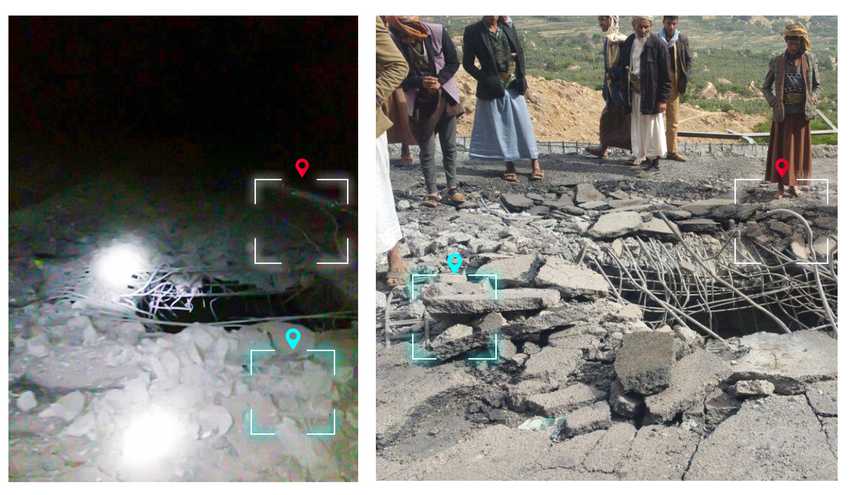 There was no information, in the open source content published after the two attacks, on civilian casualties caused by the airstrikes.

The impact of the attack was limited to the damage on the bridge’s structure, which had two craters of varying size. One crater had a radius of approximately 1.5 meters, and the other crater had a radius of approximately 0,6 meters from the 8 meters width of the bridge. This means that the bridge was partially destroyed and subsequently out of service, preventing the passage of large trucks across the bridge. However, given the severe extent of the damage, small vehicles were still able to pass across the bridge, but with great difficulty, causing severe congestion as is shown in several videos taken after the bombing. 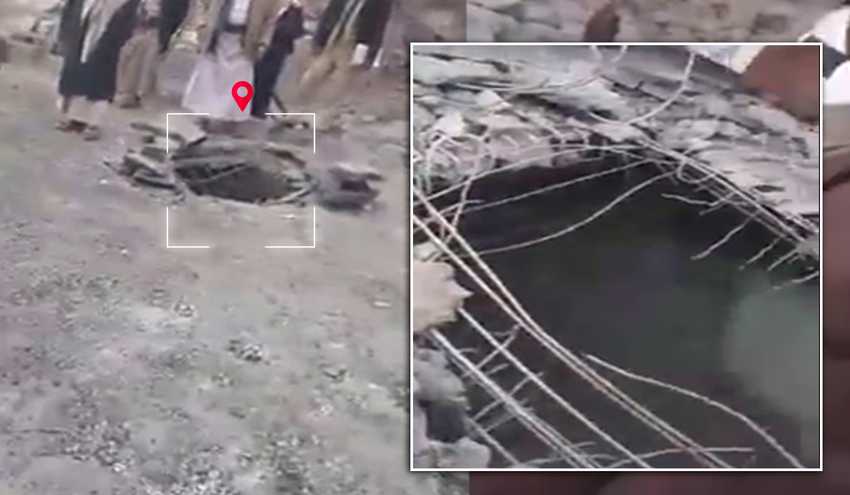 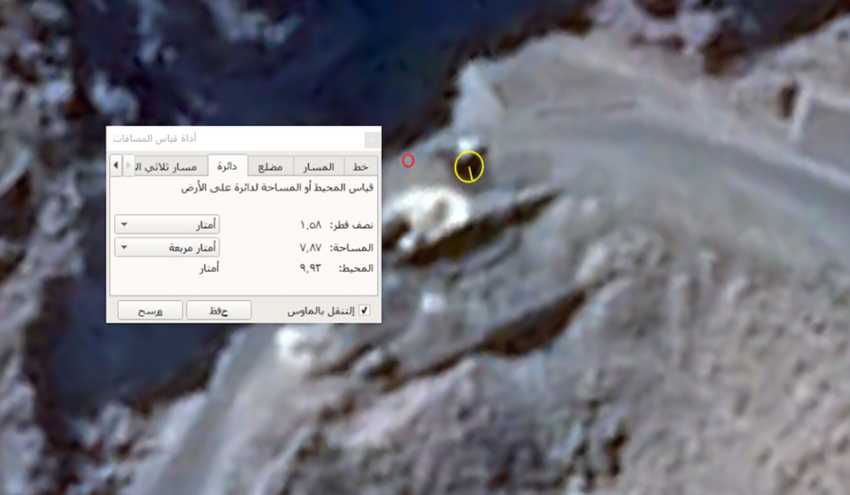 Munitions used in the attack

“Al-Masirah TV ” video report, taken after the first attack on the bridge, showed people from the area carrying the remnants of the munition allegedly used in the attack. However, given the limited imagery, Yemeni Archive was unable to find clear evidence to determine the exact type of ammunition used in the attack. 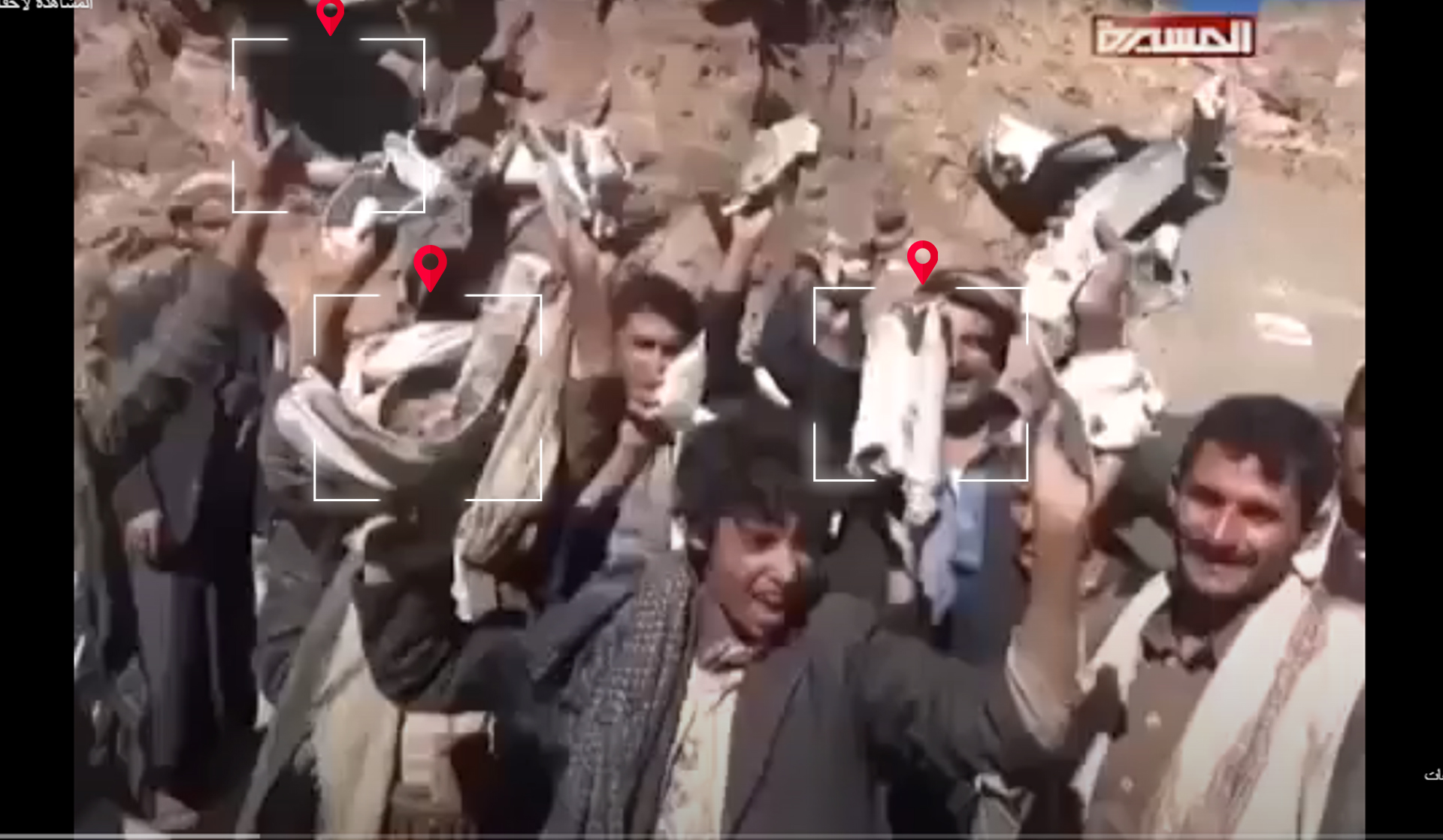 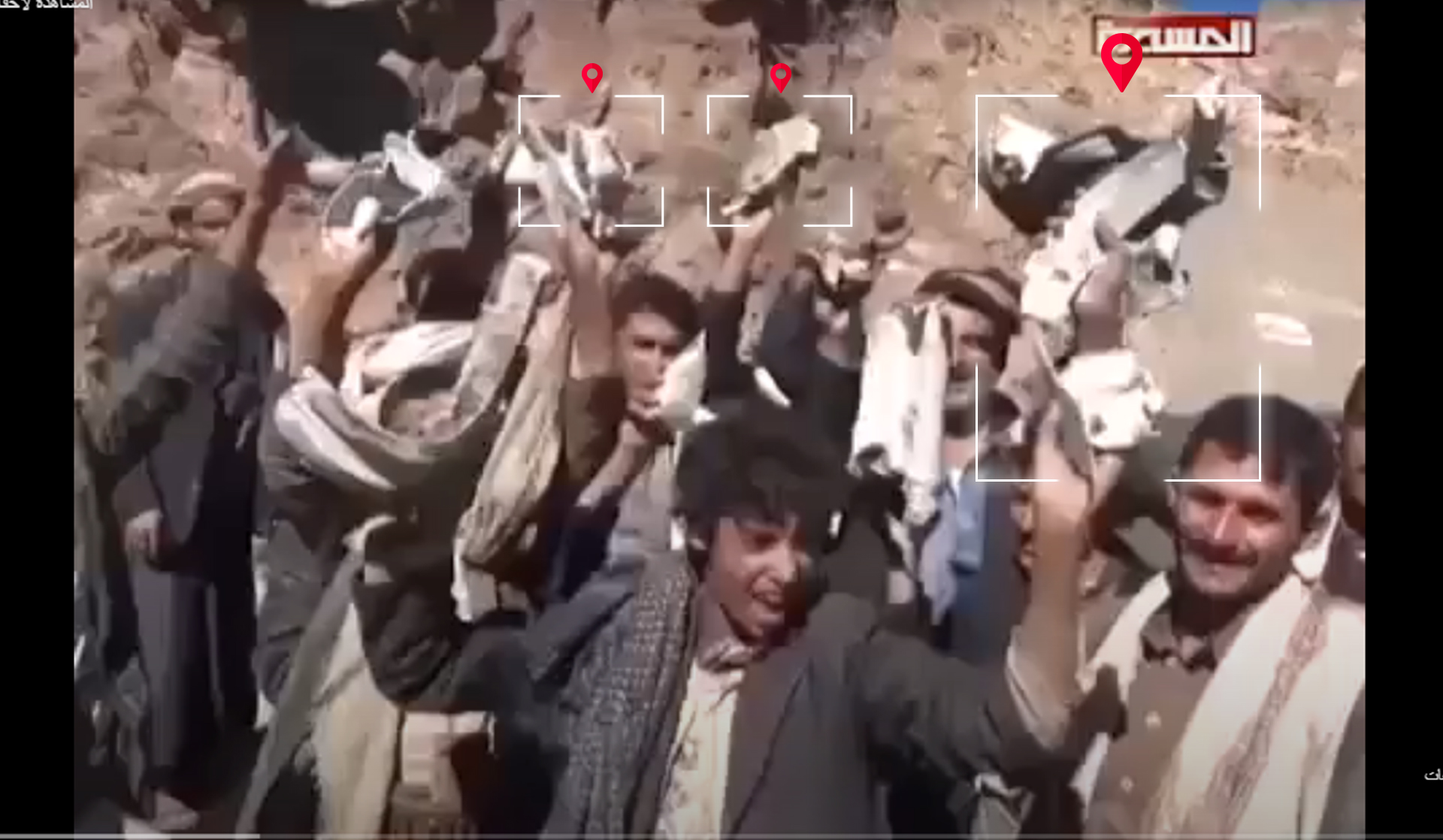 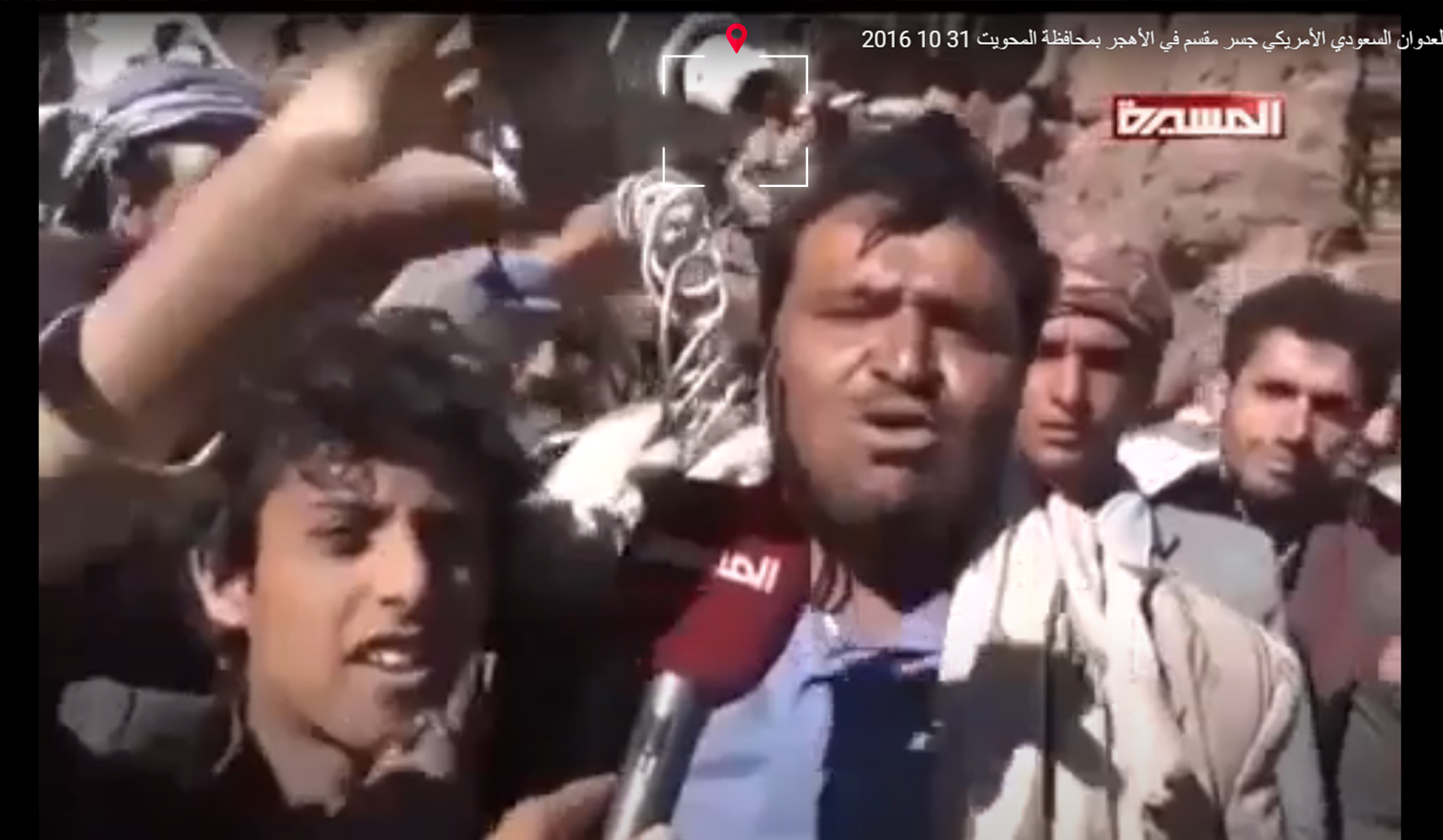 Nevertheless, by analyzing the munition pieces from the first attack and the damage caused by the second attack, It is likely that the attack was carried out by Saudi-led coalition warplanes.

After verifying and analyzing open source information, the Yemeni Archive team concluded that Saudi-led coalition warplanes carried out two attacks, the first one at midnight on October 31 and the second around an hour before midnight on November 7, 2016, on the Muqasam Selahah bridge in the Al Mahwit Governorate, which is located on the main road connecting the governorates of Sana’a, Amran, and Al Mahwit with the western coastal governorate of Al Hudaydah. The attacks destroyed the bridge forcing it out of service and cutting off the road to large trucks.