At dawn on 26 March 2022, Saudi led Coalition bombed Haddah neighborhood in al-Sabeen District, southwest of Amanat Al-Asimah hitting by two air strikes hangars and houses of the insurance building guards in the yard of the “General Authority for Social Security and Pensions” and damaging neighboring houses. The raid killed 8 civilians, including 5 children and 2 women. Four others were wounded.

Hadda neighborhood is located in al-Sabeen District, southwest of the capital Sana’a. The neighborhood houses government agencies and foreign embassies, as well as the headquarters of the United Nations High Commissioner for Human Rights and the United Nations High Commissioner for Refugees, as well as the courtyard of General Authority for Social Security and Pensions that was bombed near the Turkish embassy and the Hadda villas complex. The targeted area houses the yard of the Safer Oil Company, which contains several gas tanks, in addition to hangars and houses for the Authority for Social Security guards. The nearest civilian residential building is located about 10 meters away from the attacked site.

After the “Houthis” announced the targeting Aramco in Jeddah and the Samtah electricity station in Saudi Arabia, the “Where is the explosion now” page published the news of hearing heavy overflights and sounds of explosions at 3:42 am on Saturday, 26 March 2022.

A screenshot from “Where’s the explosion now?” Facebook page

Minutes later, journalist Ahmed Jahaf published a photo on his Twitter of a fire in Haddah neighborhood, which he said was the first strike on the Authority for Social Security yard near the yard of the Safer Oil Company.

A screenshot of the tweet by journalist Ahmed Jahaf at 03:55 AM

According to the time stamp of the reports by Ahmed Jahaf, and “Where is the explosion now” Facebook page, in addition to the testimony in Al Masirah Mubasher video, who stated that the bombing was at 03:35, the probable time of the attack is between 03:35 and 03:55 on 26 March 2022. The first advance warning regarding Sanaa was published by Al Hadath Breaking Twitter at 05:02 am, about an hour and a half after the bombing.

Air strikes hit the yard of the Authority of Social Security in Saana, also came minutes after Saudi-led Coalition issued a warning to civilians in al-Hodeidah at 2:49 a.m, not to approach any oil site or facility, 12 minutes before the bombing started al-Hodeidah.

A screenshot of the tweet by Al Hadath Breaking Twitter, the first warning to civilians in Haddah neighborhood 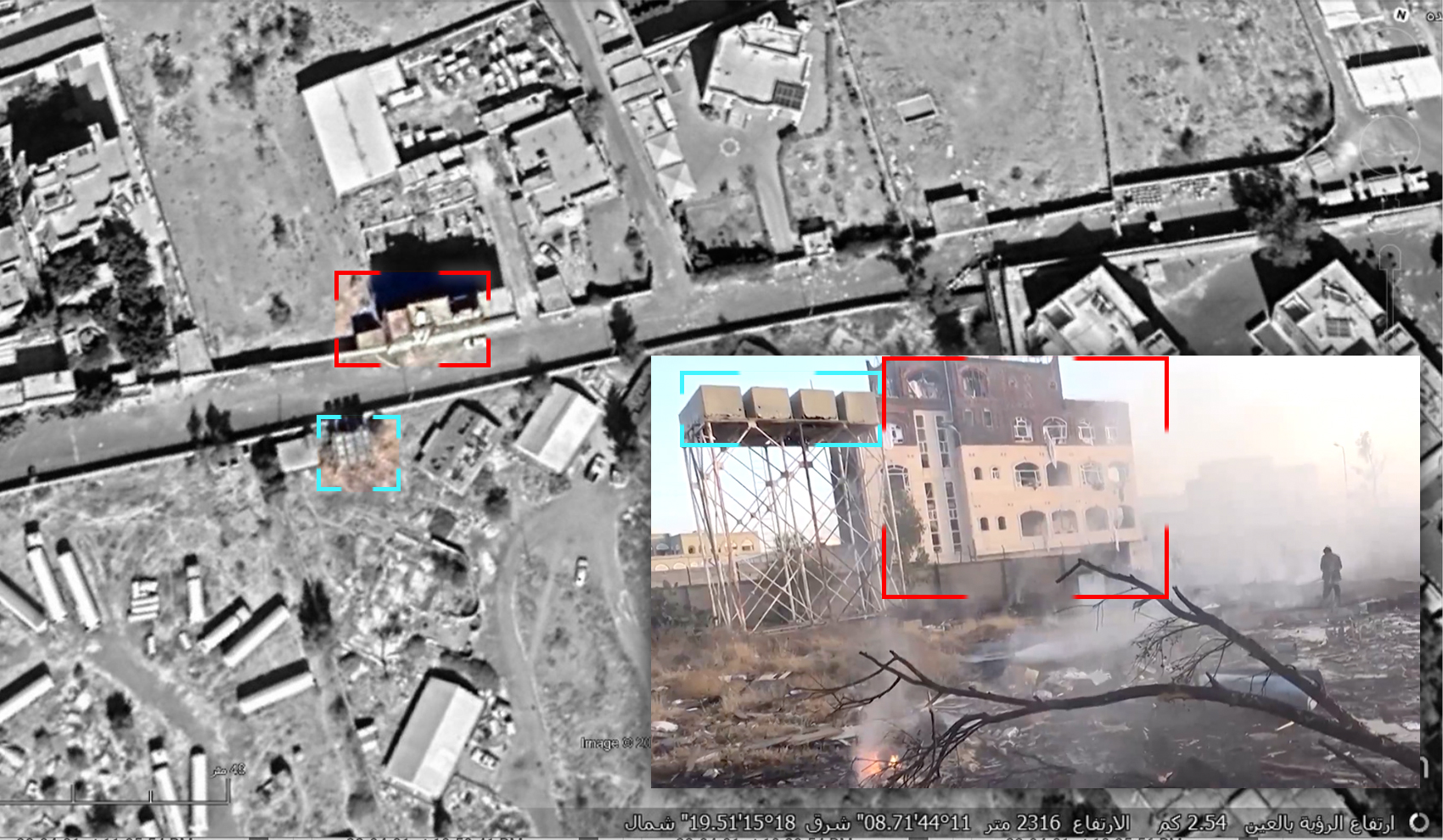 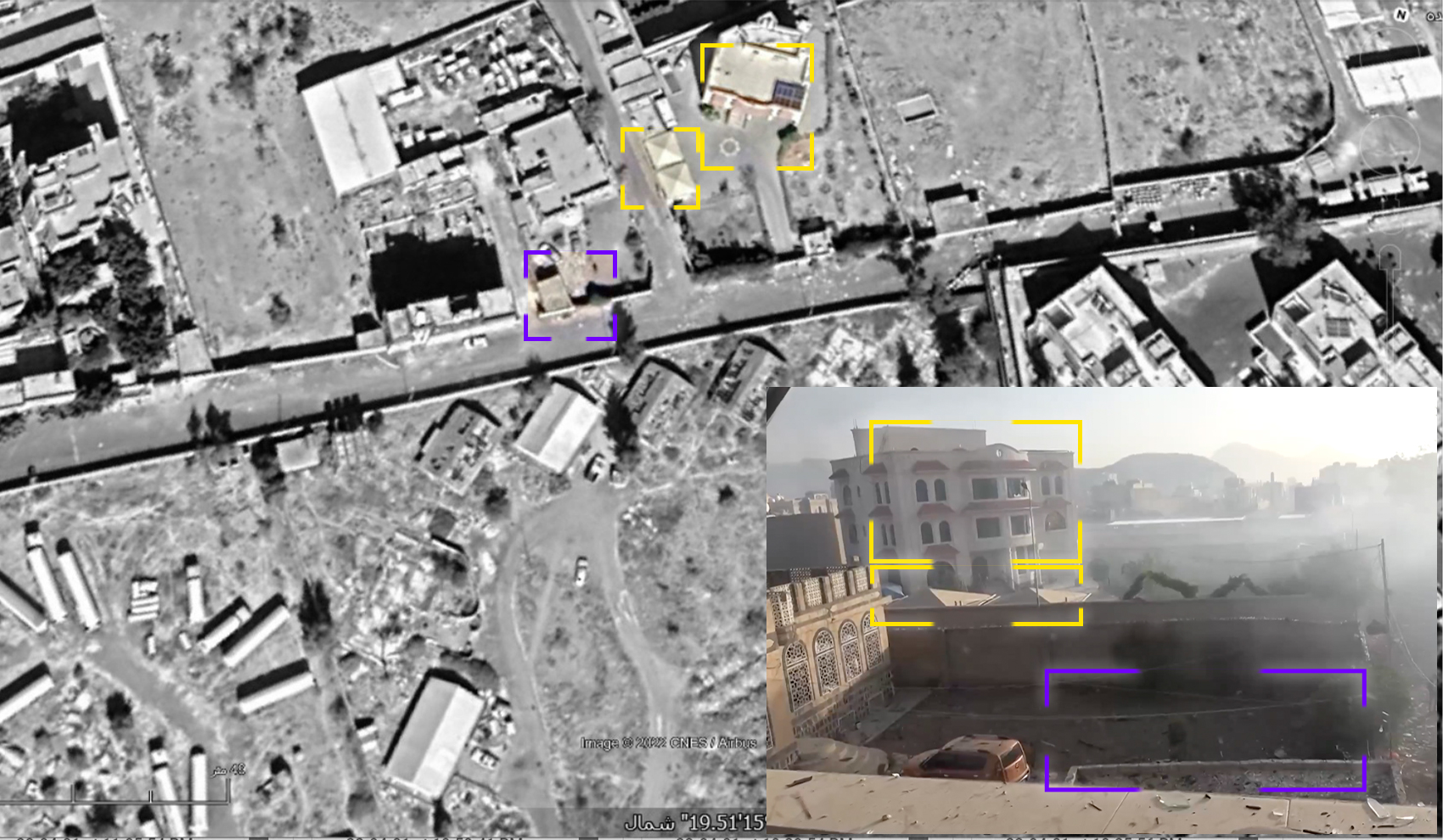 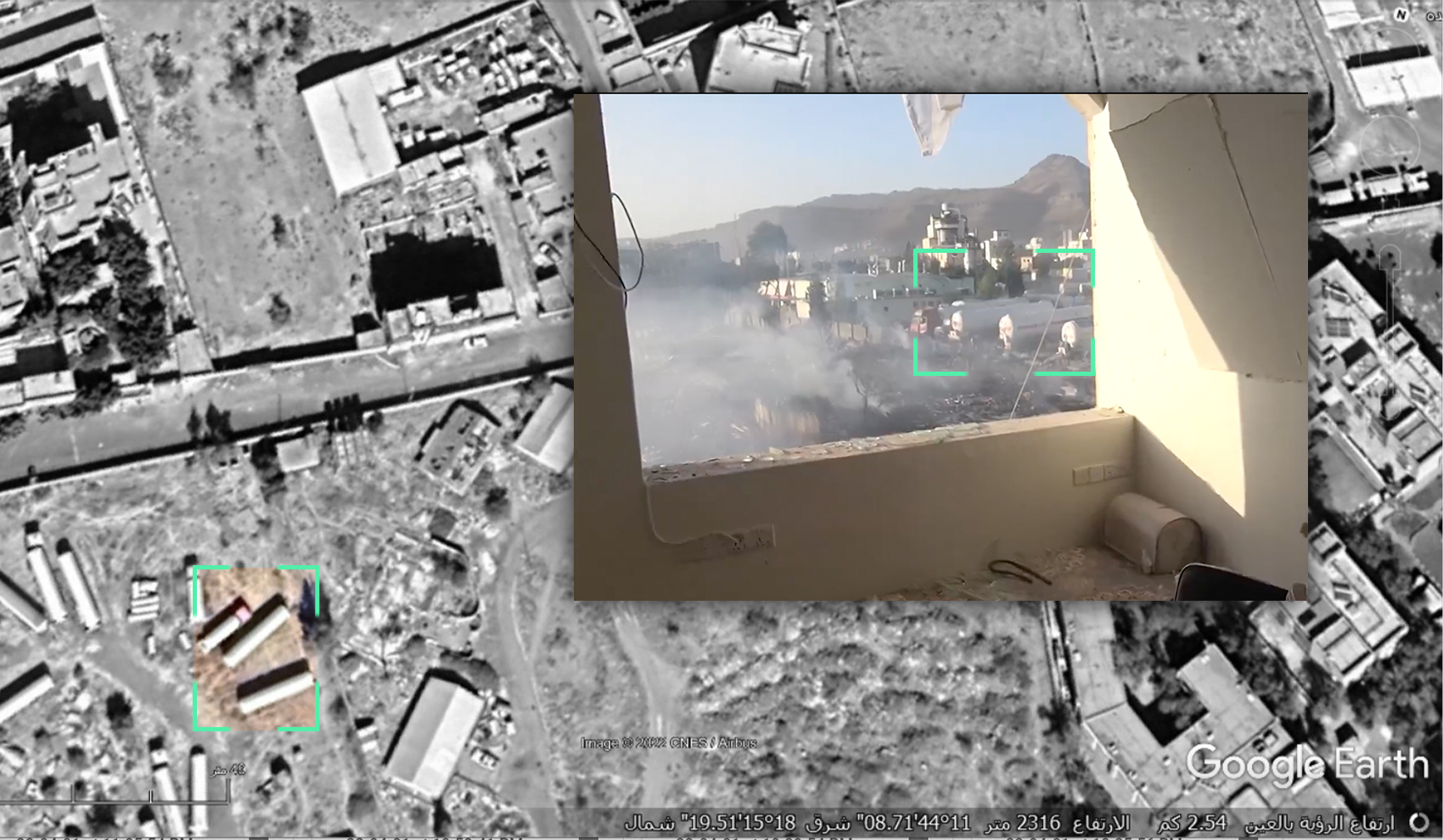 Screenshots from Al Masirah video, and a satellite image from Google Earth 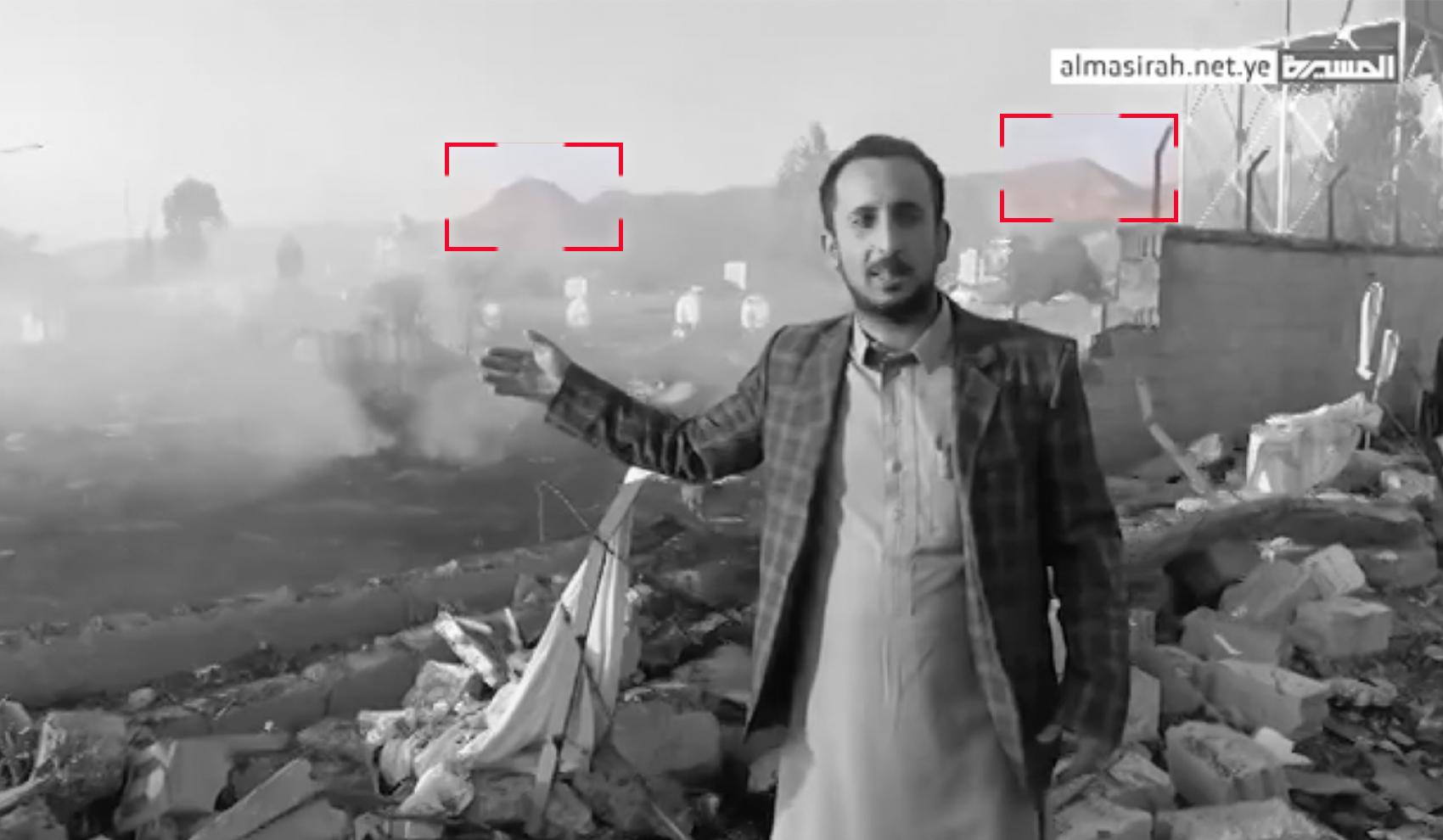 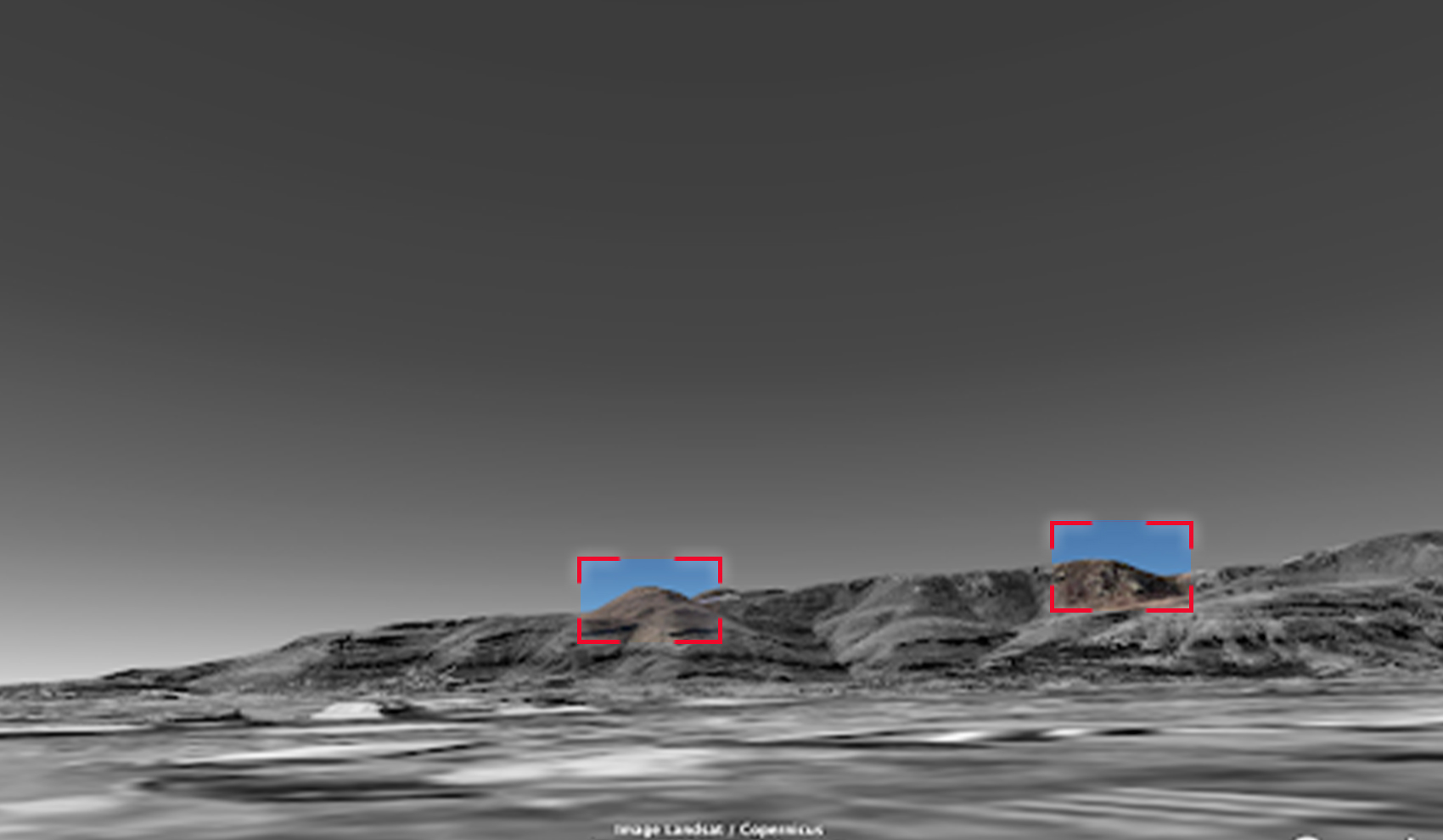 A screenshot from Al Masirah video, and a satellite image from Google Earth

Nature of the target site:

The yard contains 8 hangars that existed before the outbreak of the war. Open street map data indicates that the yard was previously affiliated with the Hunt Oil Company, and may have become affiliated with the Authority for Social Security after the company stopped its activities in Houthi areas.

A screenshot from the Open street map of the yard, which was previously affiliated with Hunt Oil Company

The hangars were subjected to a change from December 2019 - until July 2021, according to satellite images. Three were completely destroyed before the last bombing in an unknown way and was not directly reported. Two of the hangars were destroyed in March 2021 when the Coalition carried out strikes on the Attan area, which is about one kilometer from the courtyard, while the third was destroyed between June and July 2021, at a time when no strikes were reported close to the place.

The visual content documented by the Houthi media – the Houthis prevent independent media agencies from freely working in their areas of control - does not show any evidence that indicates the actual activity on the site. Satellite images from Google earth show, during June-July 2021, shipping unknown components near the entrance to one of the hangars targeted in the last bombing, at the same time as the destruction of the aforementioned third hangar. After the bombing, there was no trace of what was in the hangars.

The work of the Authority, according to Yemeni law, is limited to securing an adequate standard of living for retirees after the end of service and providing for their families in the event of death, in addition to many jobs and tasks related to the financial aspects of state employees after retirement and death, in tasks that do not usually require the presence of sites and hangers for storage.

In the video of Al Masirah Mubasher, people at the site said that the bombing targeted two houses of families of guards of the Authority Building in the yard. The video shows household furniture and children’s clothing, in addition to the exhumation of the body of a child, meters away from the targeted hangar, which confirms the presence of civilian houses made of wood and bricks at the targeted site. 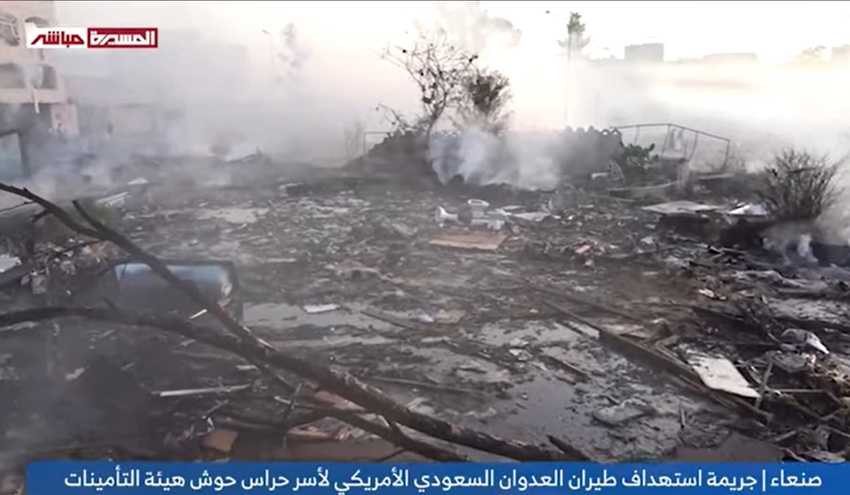 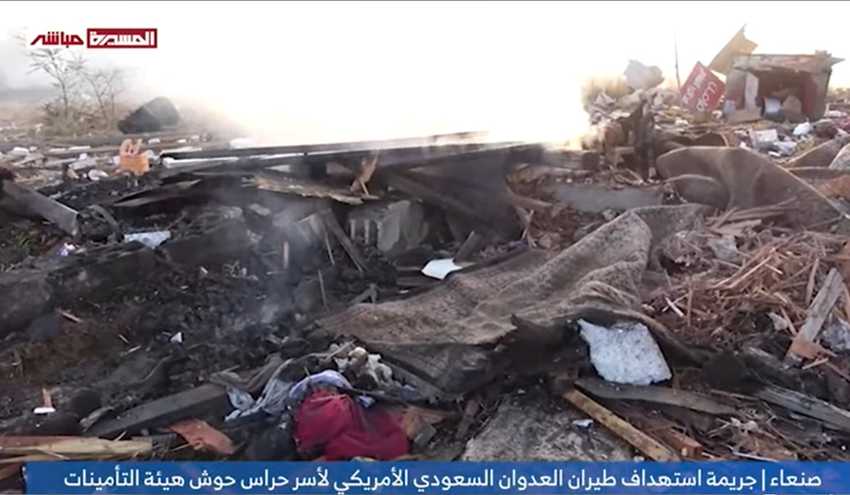 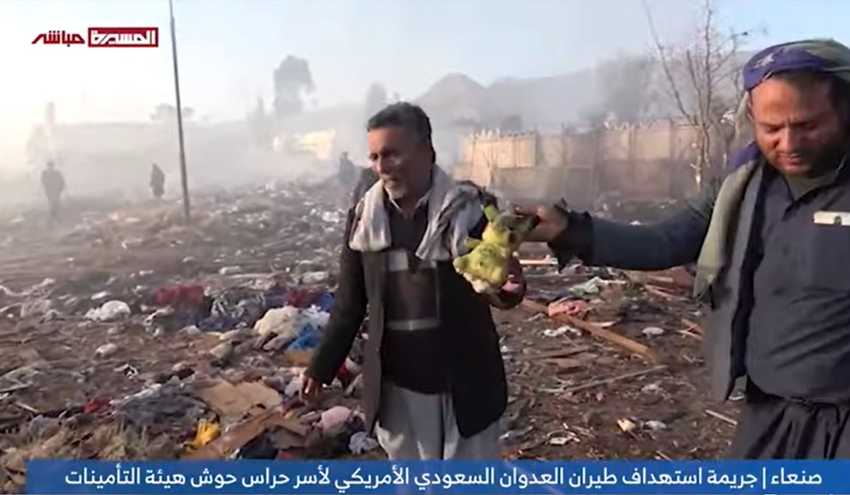 We could not confirm that there are weapons stored in the yard due to the lack of evidence in addition to the previous bombing of the destroyed hangar in June-July 2021. Given the nature of the sites targeted by the coalition on 26 March 2022, in the governorates of Hodeidah and Sana’a, the targeting of the yard, which is adjacent to the yard of the Safer Oil Company and where gas tanks are located, may be a part of the Coalition air campaign in response to the Houthi attacks on oil facilities in Saudi Arabia.

The Saudi-led coalition. Saudi official media said that the air raids - which they described as a response process - aim to stop targeting oil facilities or affect energy security in Saudi Arabia, by targeting sources of threat in Sanaa and Hodeidah.

At 00:20:09 in Al Masirah Mubasher video, an armed man raises a piece of shrapnel of ammunition allegedly used in the bombing of the yard. They appear to be part of the guidance fan blades of the GBU-12 Paveway II guided bomb manufactured by the American companies Lockheed Martin and Raytheon and used by the Saudi Air Force. 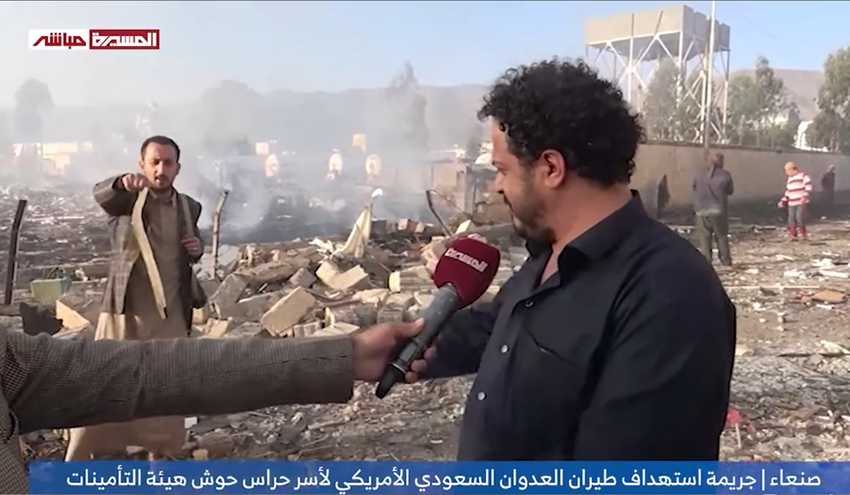 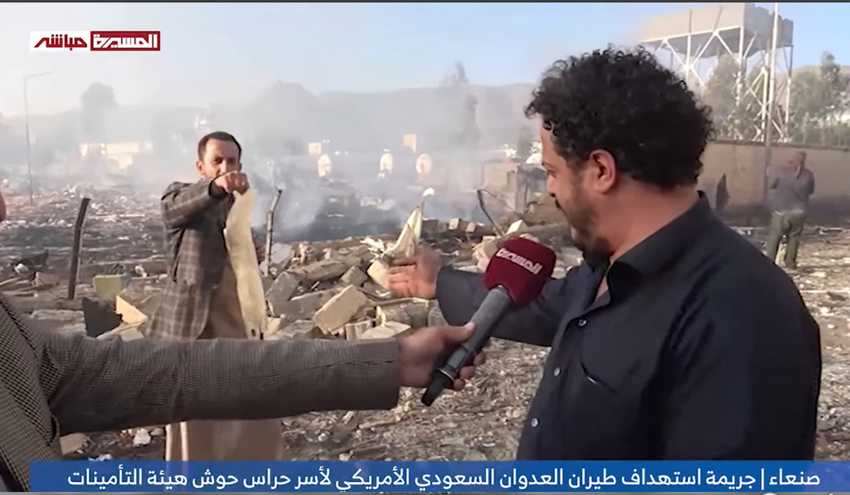 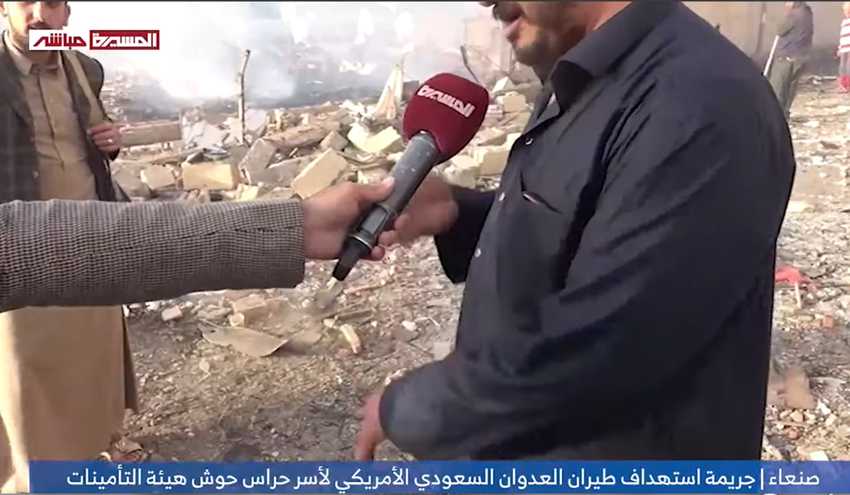 We examined the clips from Al-Masirah and Al-Masira Mubasher videos, which show where the ammunition remains were found at different times in the video reports, and we found that they were near the bricks in many of the clips before they were displayed directly by one of those present at the site. 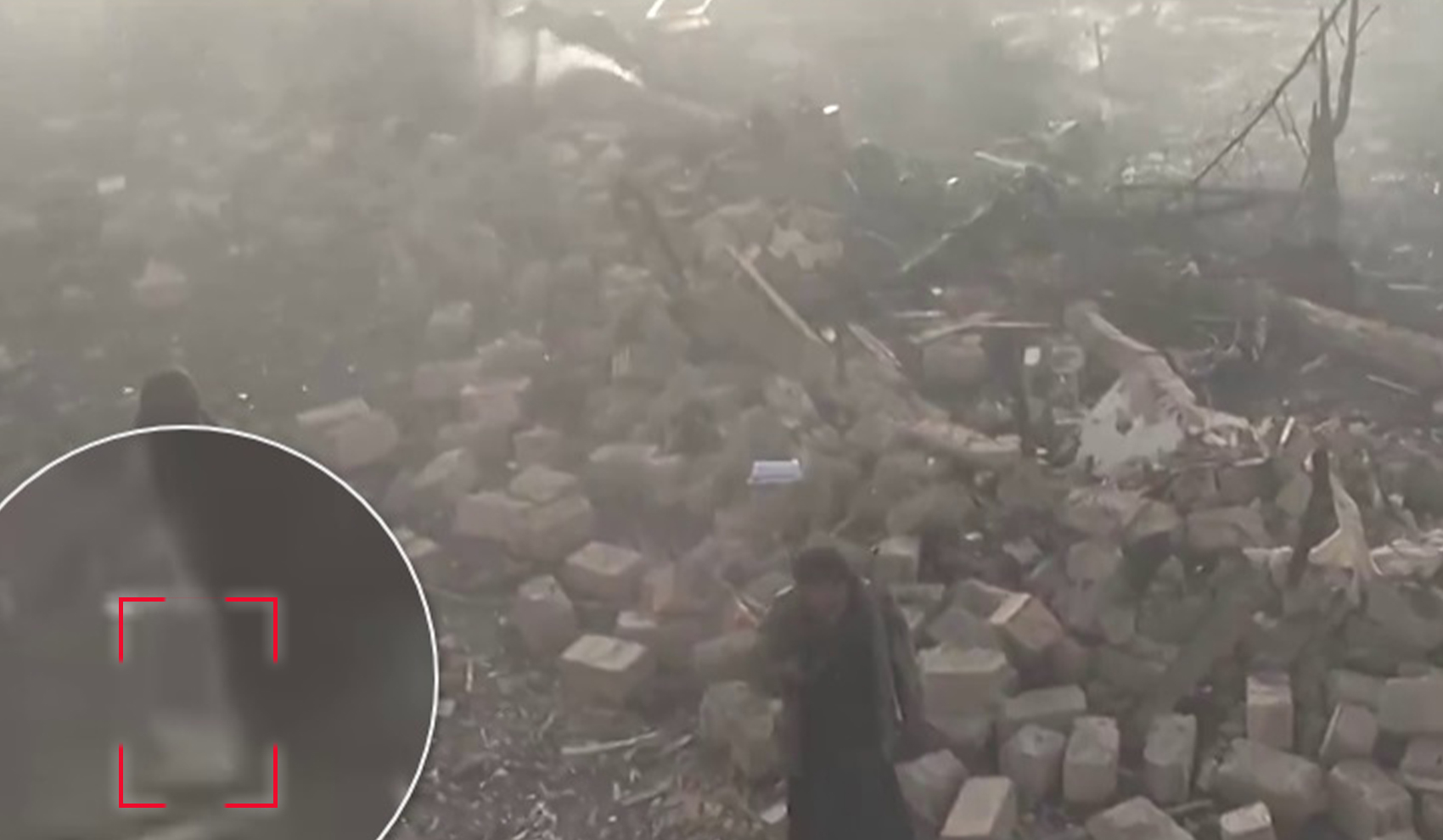 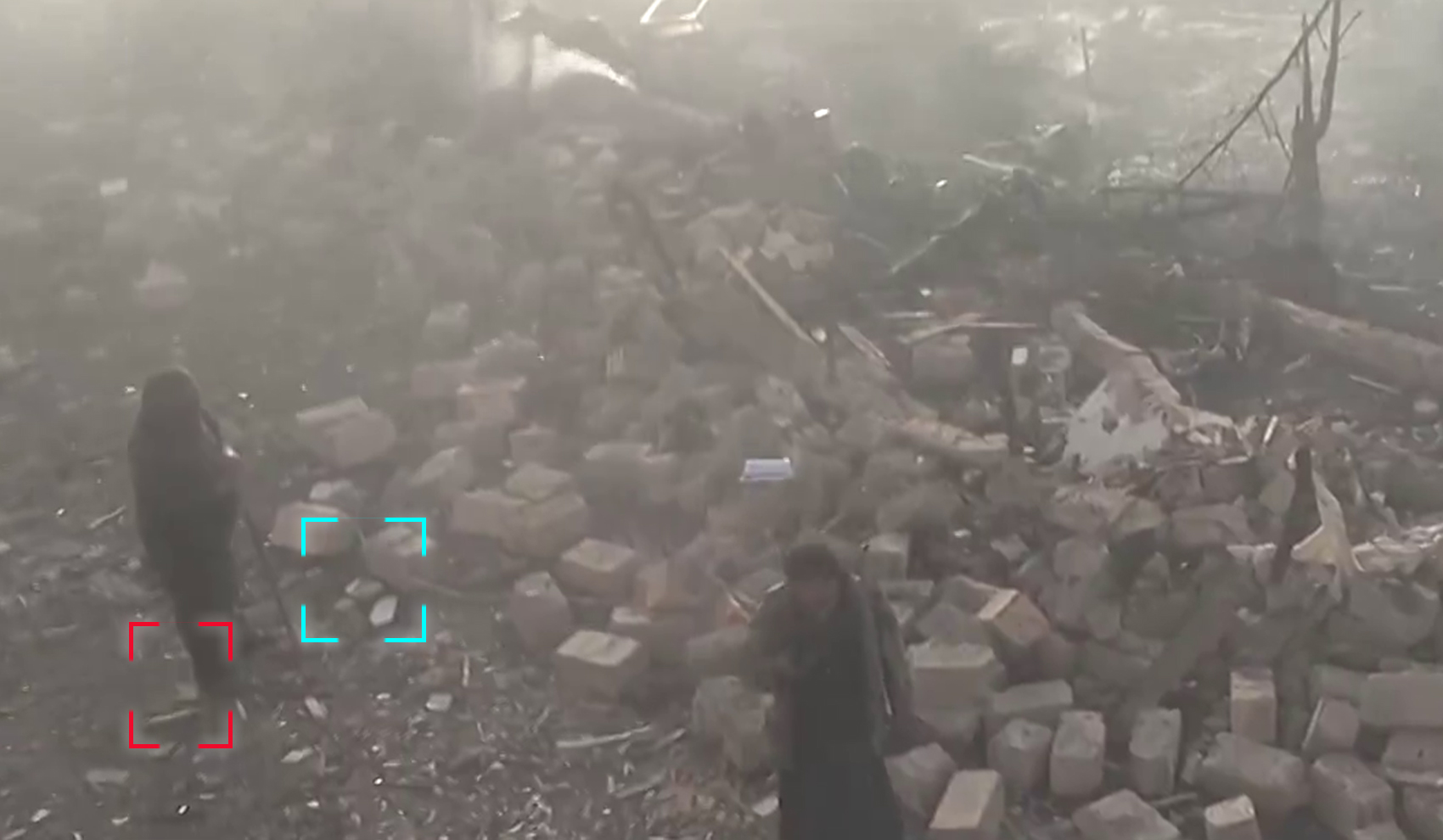 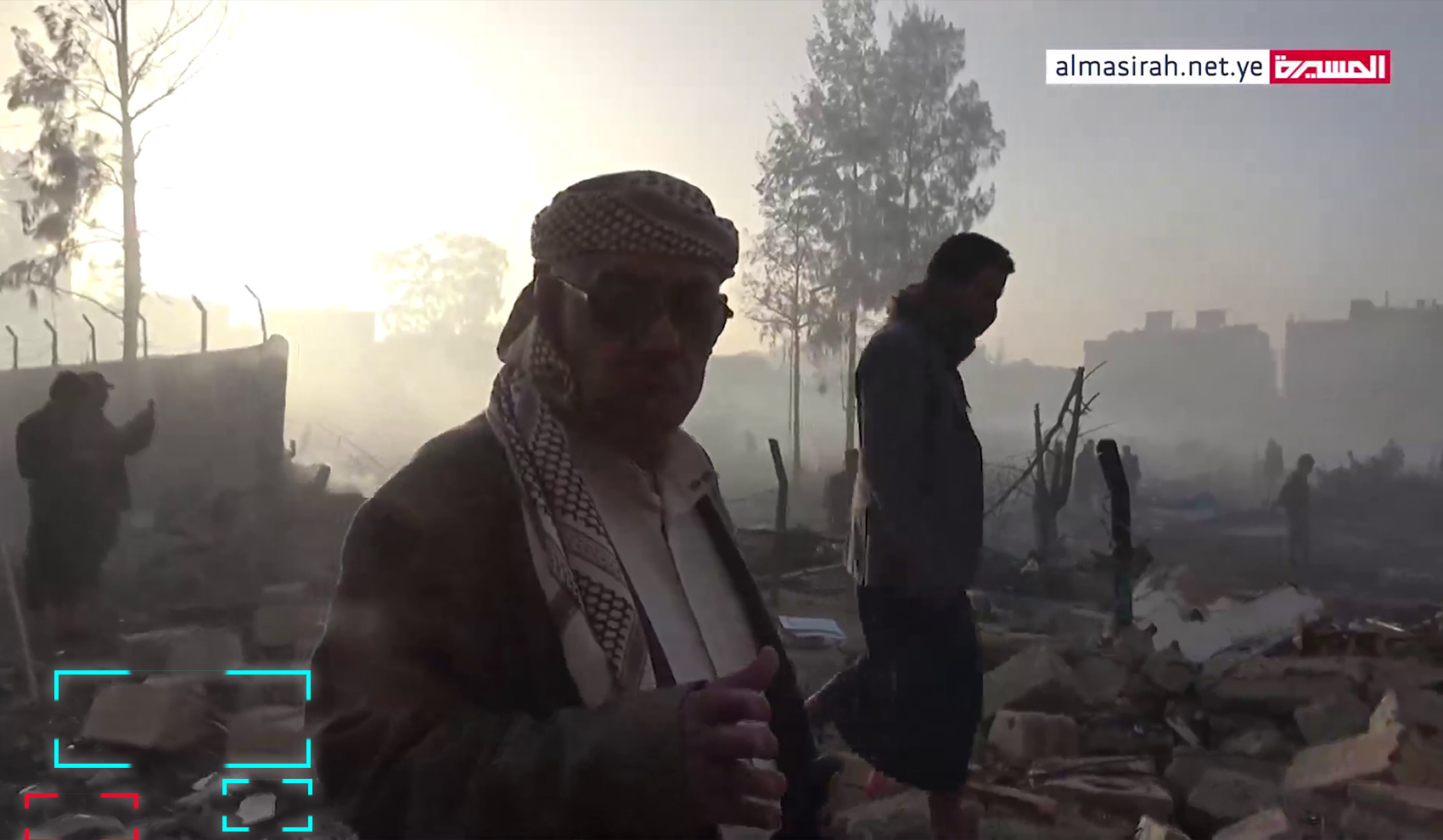 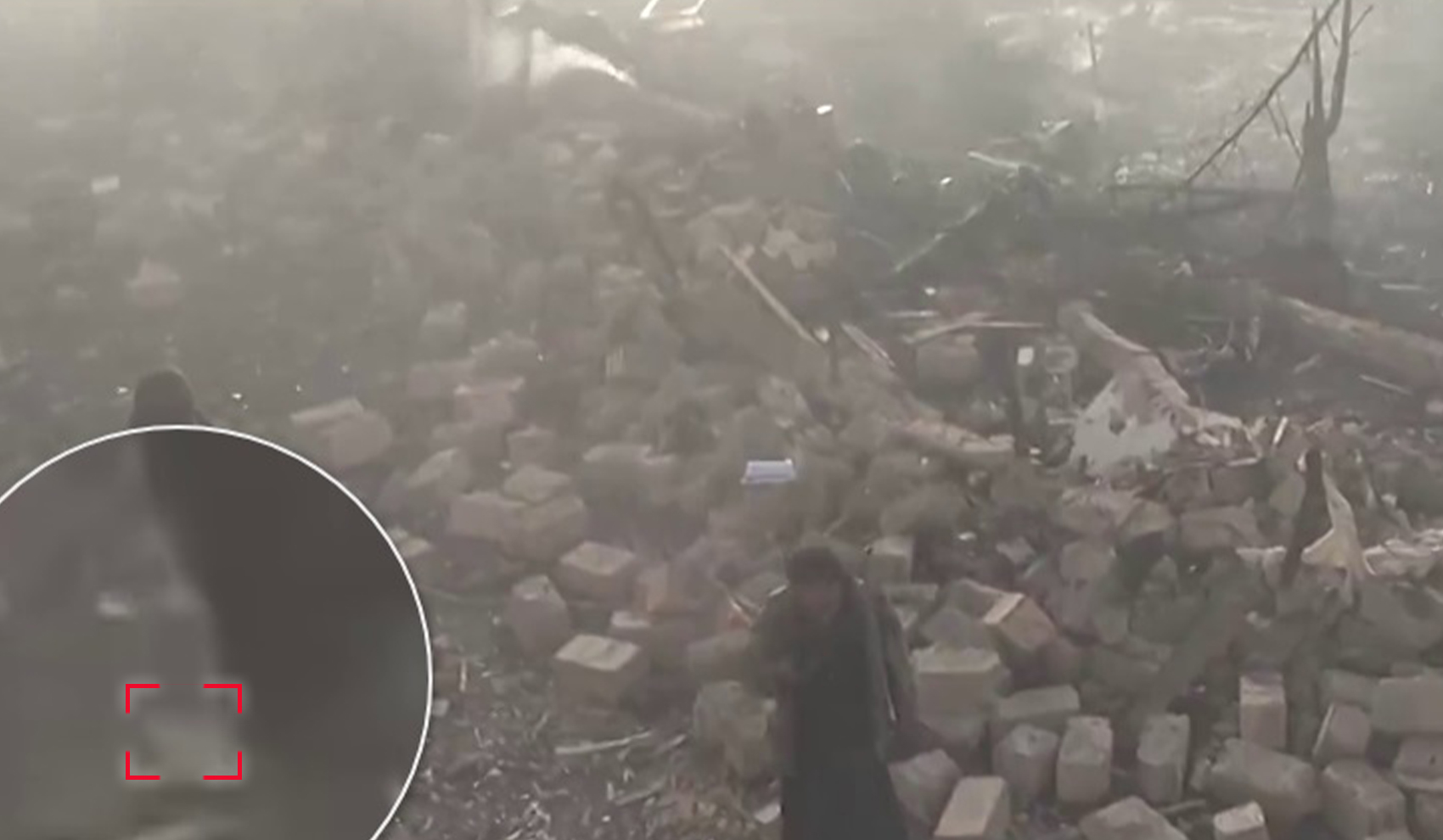 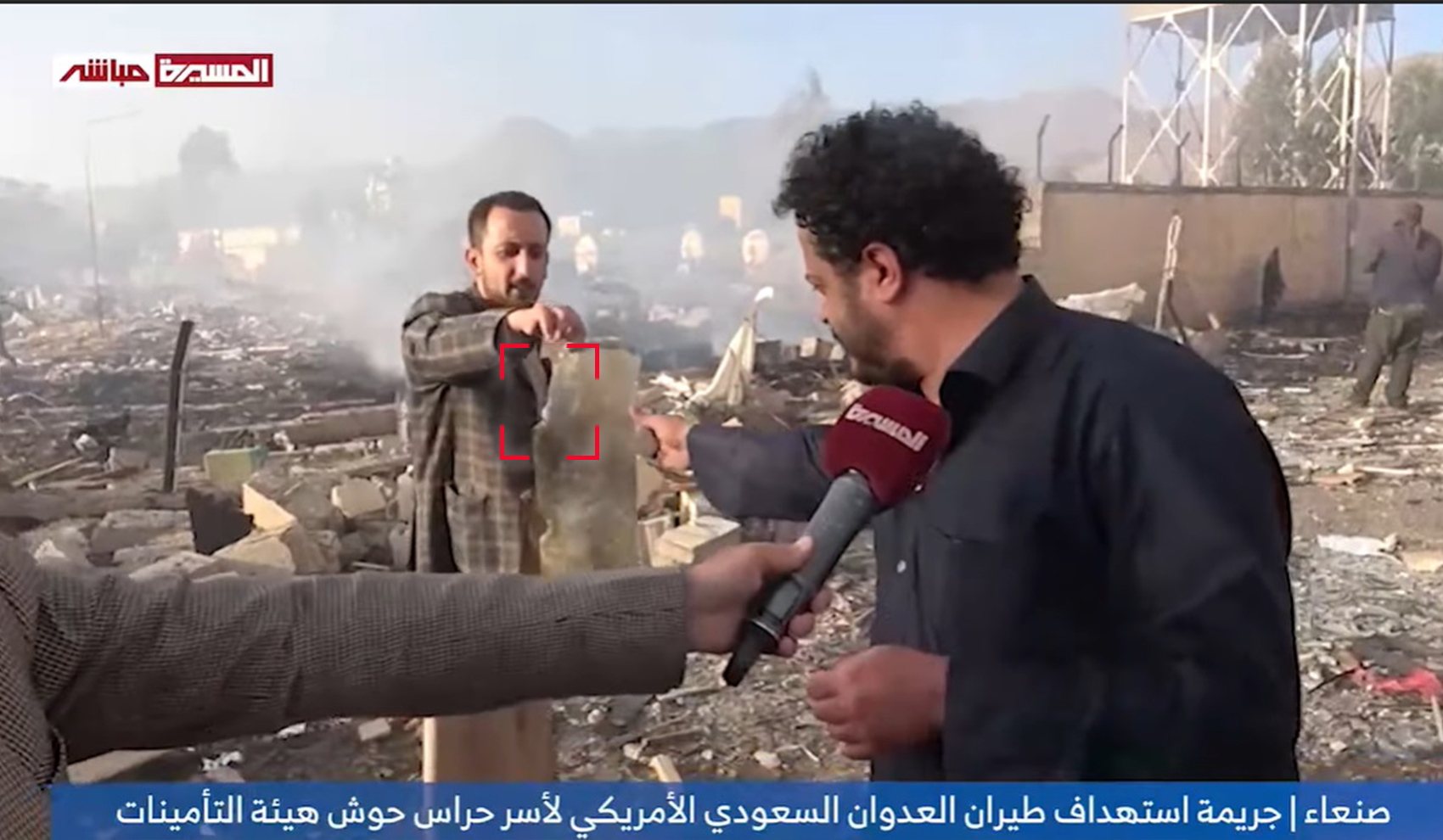 The strikes resulted in material losses to the property of civilians living near the yard. These losses were the partial destruction of the house of a salesman, the windows of another house next to it were broken, and a car was damaged. 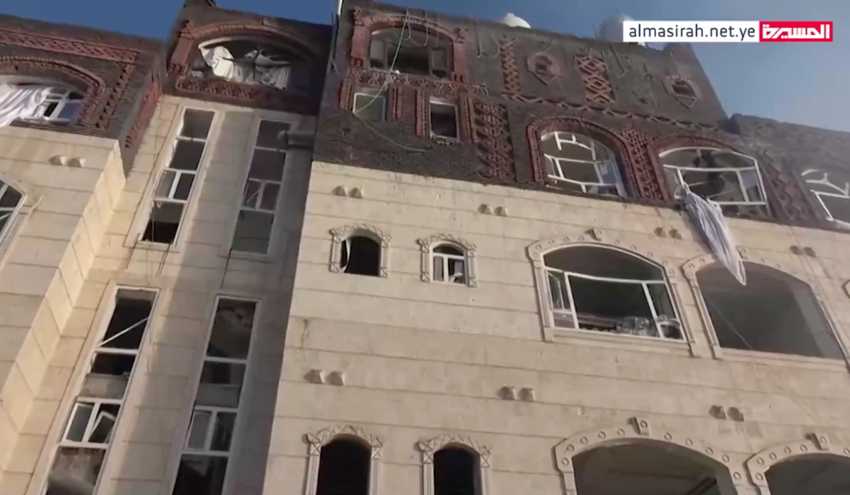 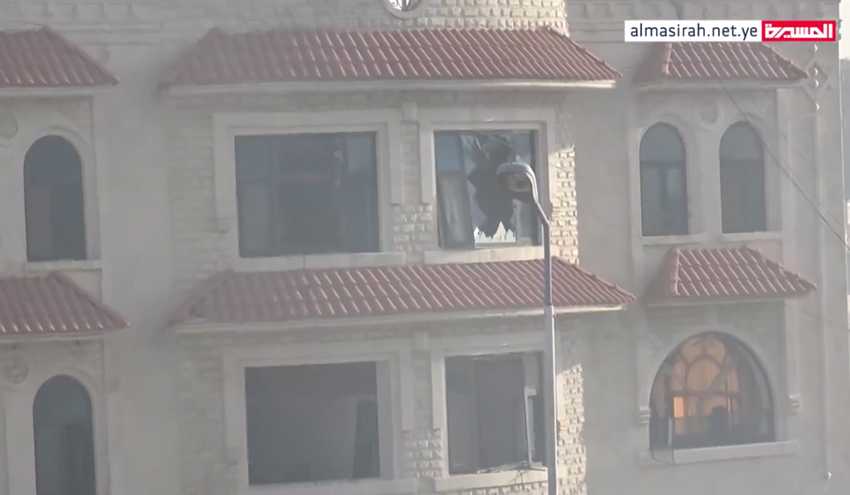 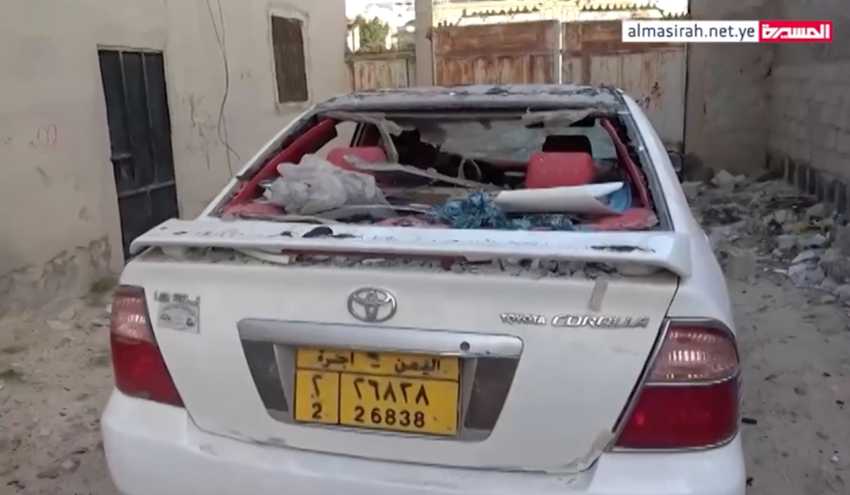 The nature of the targeted sites and the timing of the attacks suggests that the Coalition conducted retaliation, revenge or belligerent reprisals in reaction to allegedly unlawful acts by the Houthis, hours after they targeted oil facilities in Saudi Arabia. However reprisals acts are not exempt from international law requirements of taking measures to protect civilians. Military commanders have the duty to implement precautionary measures with regard to war methods. Humanitarian law specifies the individual responsibility of each member of the armed forces with regard to such actions. Under international law, “effective advance warning shall be given of attacks which may affect the civilian population.” The Coalition’s advance warning of impending attacks did not appear to be effective or meaningful. It came via Twitter one hour and half after the strikes that killed and injured civilians. It seems that the Coalition’s purpose of this warning was to propagate that it is taking measures to protect civilians and respect international law. However, the warning was not effective nor appropriate. The Coalition should use effective methods of advance warning. The purpose of the warning is to enable civilians to protect themselves from an impending attack.

Yemeni Archive concluded that between 03:35 - 03:55 am, 26 March 2022, the Saudi-led Arab Coalition bombed the yard of General Authority for Social Security and Pensions with two air strikes in Haddah neighborhood in Al-Sabeen district, southwest of the capital Sana’a, in response to the Houthi bombing of oil and service facilities in Saudi Arabia. The bombing killed 8 civilians and wounded 4 others. The courtyard contains eight storage hangars that belonged to the Hunt Oil Company before the outbreak of the war in Yemen, then they become under control of the General Authority. Satellite images showed transporting unknown goods in one of the hangars, in addition to the continuous presence of four-wheel drive vehicles. Yemeni archive did not find conclusive evidence that the hangars stored weapons, or that there was confirmed military activity.