Incidents gathered and identified by Yemeni Archive from open-source information originally collected in our “attacks on infrastructure by the Saudi-led coalition in Yemen” database reveal that the Lahmah Bridge that is located in Al-Qeta’a area, Al-Mahwit District, Al-Mahwit Governorate was attacked by a number of airstrikes on September 15, 2015, using “”Mark 80” munitions. And another four consecutive incidents during the period between August 29 and September 18, 2016, which resulted in the complete destruction of the bridge and cutting off the Al-Mahwit road, which connects the Sana’a Governorate in the north with Al-Hudaydah governorate in the west. These five incidents resulted in killing a at least one person, a driver of a wheat truck was killed by the airstrike while passing over the bridge

The location of the attack site is located in the Al-Qeta’a area, Al-Mahwit District, in the central of the governorate. And is one of the smallest Yemeni governorates, about 70 km away from the Sana’a Governorate. The area has a number of bridges connecting between the north and western districts and provinces.

Ten bridges were targeted and destroyed by the Saudi-led coalition with the aim of cutting off “Ansar Allah” Houthi supply lines to the Houthi controlled Al-Hudaydah coastal city. This included the Lahmah Bridge located at: 15.432444, 43.482583. 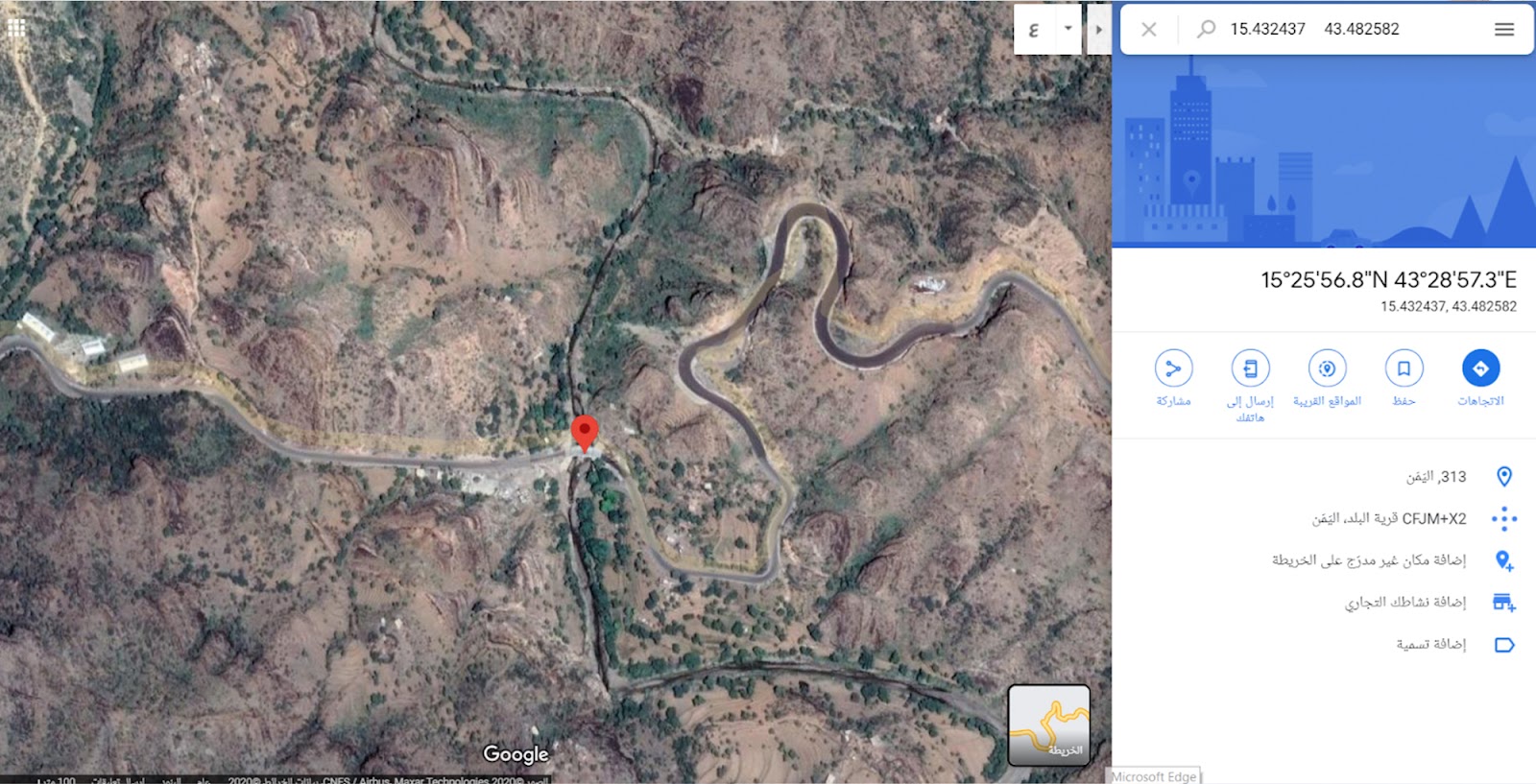 When did the attacks occur and how?

Open-source reports published on news sites, Twitter, and Facebook covering the airstrikes on Lahmah Bridge in Al-Mahwit district indicate that the bridge was bombed five times, four of which happened during a period of approximately 20 days between August 29, 2016 and September 18, 2016. These consecutive attacks completely destroyed the bridge.

The first attack took place on September 15, 2015. The bridge was partially damaged and a driver of a wheat truck was killed by the airstrike while passing over the bridge.

A picture from the news article that was published by the “Yemen Press” news site.

The second attack occurred at nine o’clock in the morning on August 29, 2016. Lahmah bridge was targeted by three airstrikes. One missile hit the bridge, while the other two missiles did not explode, but fell nearby.

A paragraph from an article on the attack by “Akhbar Alsaa” news site specifying the timing of the strike.

The fourth attack took place three days after the previews attack, in the early hours of September 8, 2016. The attack was carried out by two airstrikes, when a local source “Sami Al-Hajjaji” posted on Facebook, indicating the attack.

The fifth attack took place on September 18, 2016 at 02:04 am, and carried out by two airstrikes, according to a citizen interviewed on a news report by the Yemen Satellite Channel.

Several social media accounts, news sites, and news networks circulated photos and videos of the attacks on Lahmah Bridge in Al-Mahwit district. These pieces of media provide visual information and geographic landmarks that Yemeni Archive analyzed, verified, and matched with satellite imagery from Google Earth to pinpoint the exact location of the attacks.

It should be noted that Video by “Yemen today” YouTube channel, which was published after the fourth attack, contains previous footage from the first attack on the bridge. The video shows a burning wheat truck due to the attack, as it shows in the following picture, and after comparison with an image by “Yemen Press” news site published in September 2015. 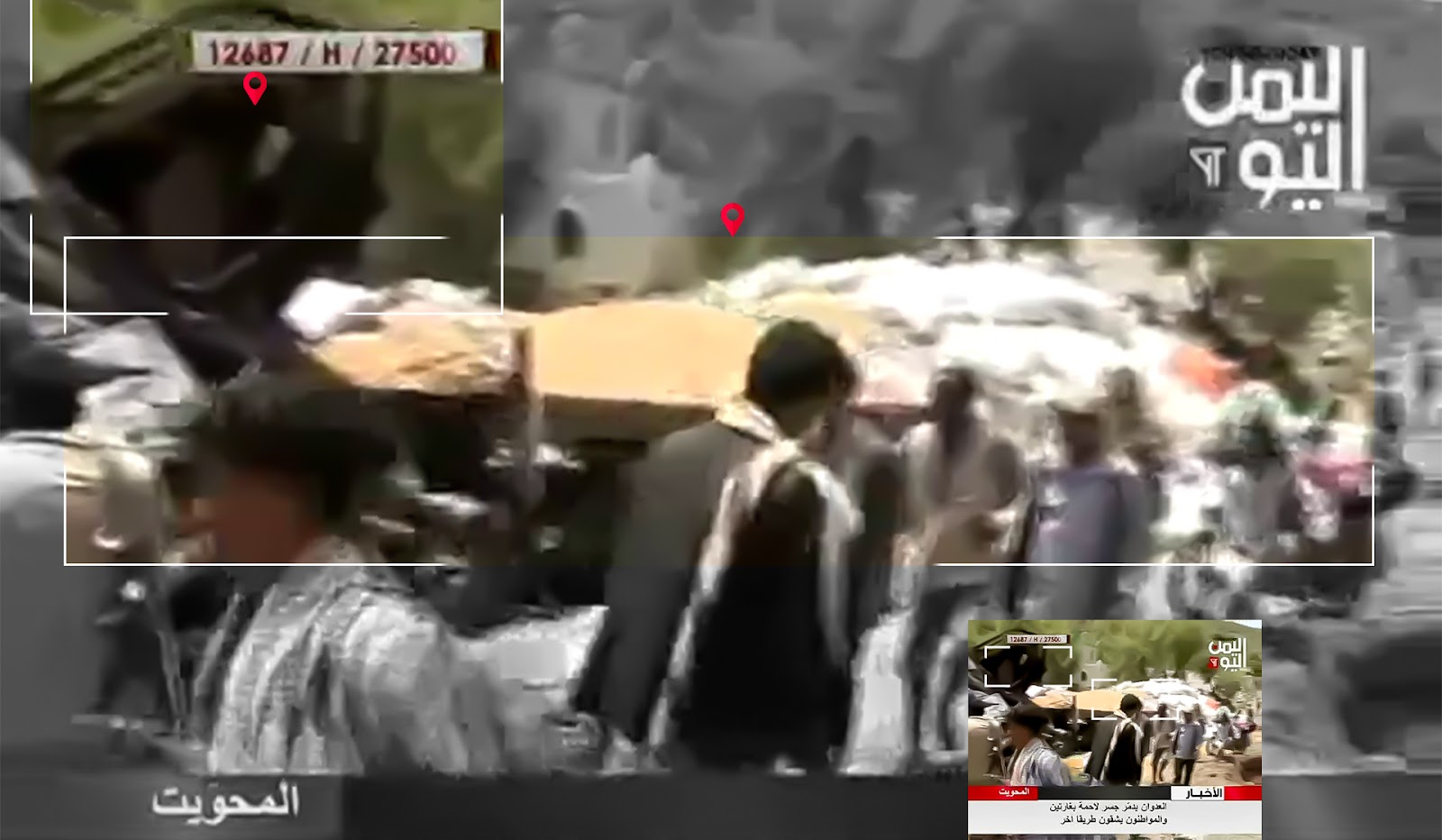 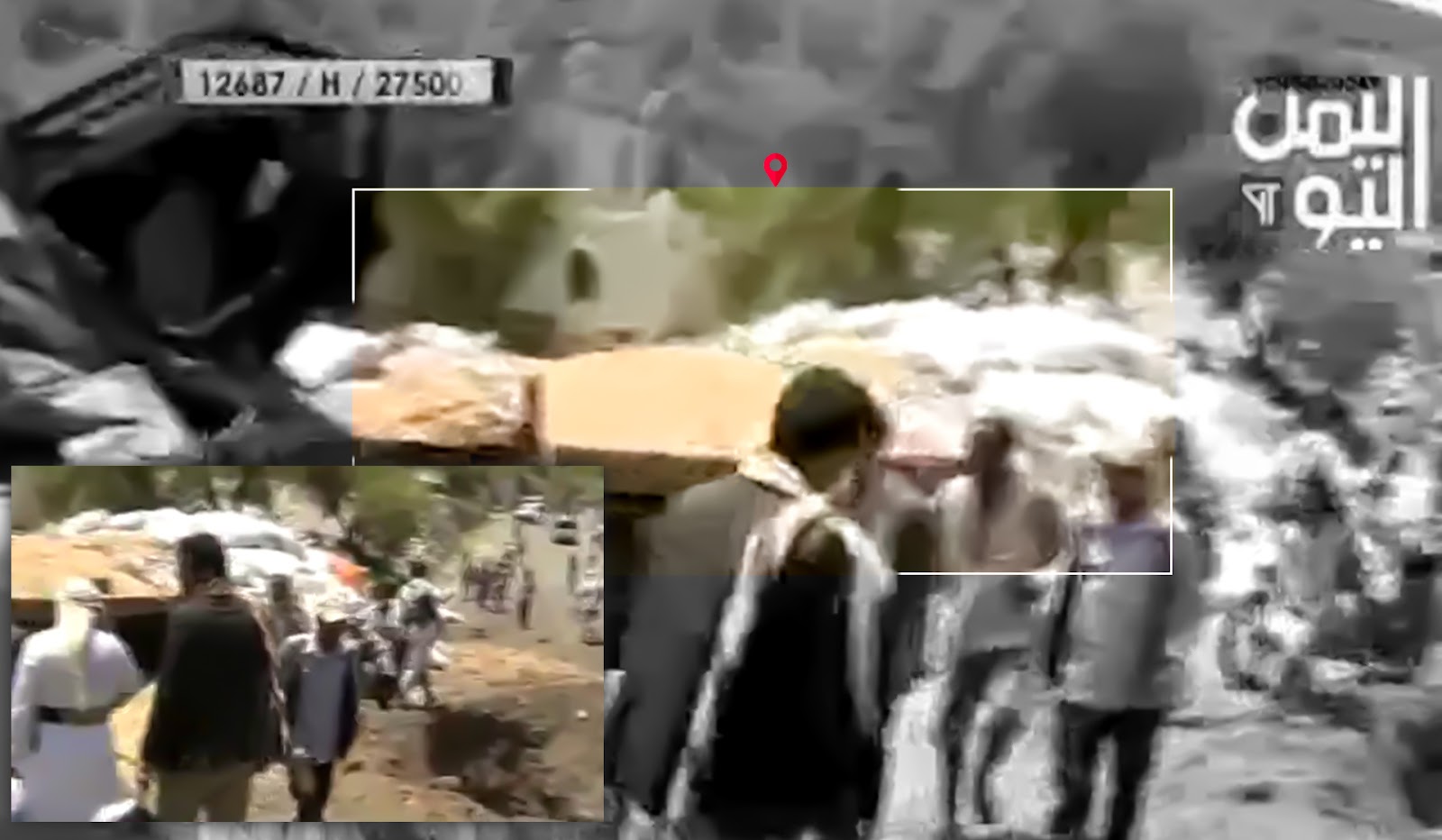 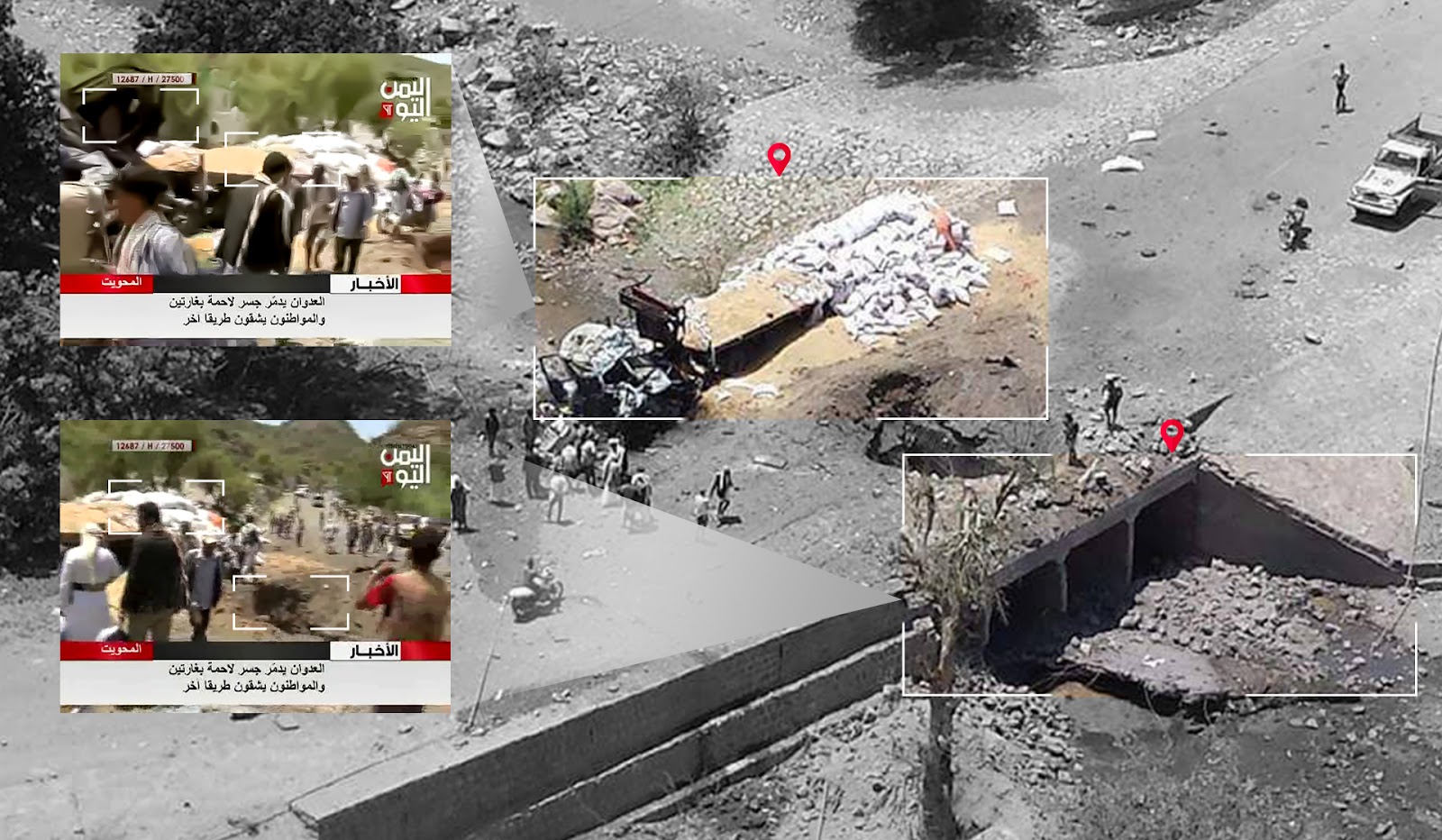 Two screenshots from Video “Yemen today” YouTube channel and “Yemen Press” news site showing the truck that was targeted a year before this footage was published.

The landmarks and bridge shown in the previous photo also match landmarks in footage in Video by Al-Masirah TV and Video by “Yemen news” TV on Youtube, which were published on the same day after the fifth attack on September 18, 2016. Landmarks of a small mosque and trees near the bridge confirm that it is showing the same place. 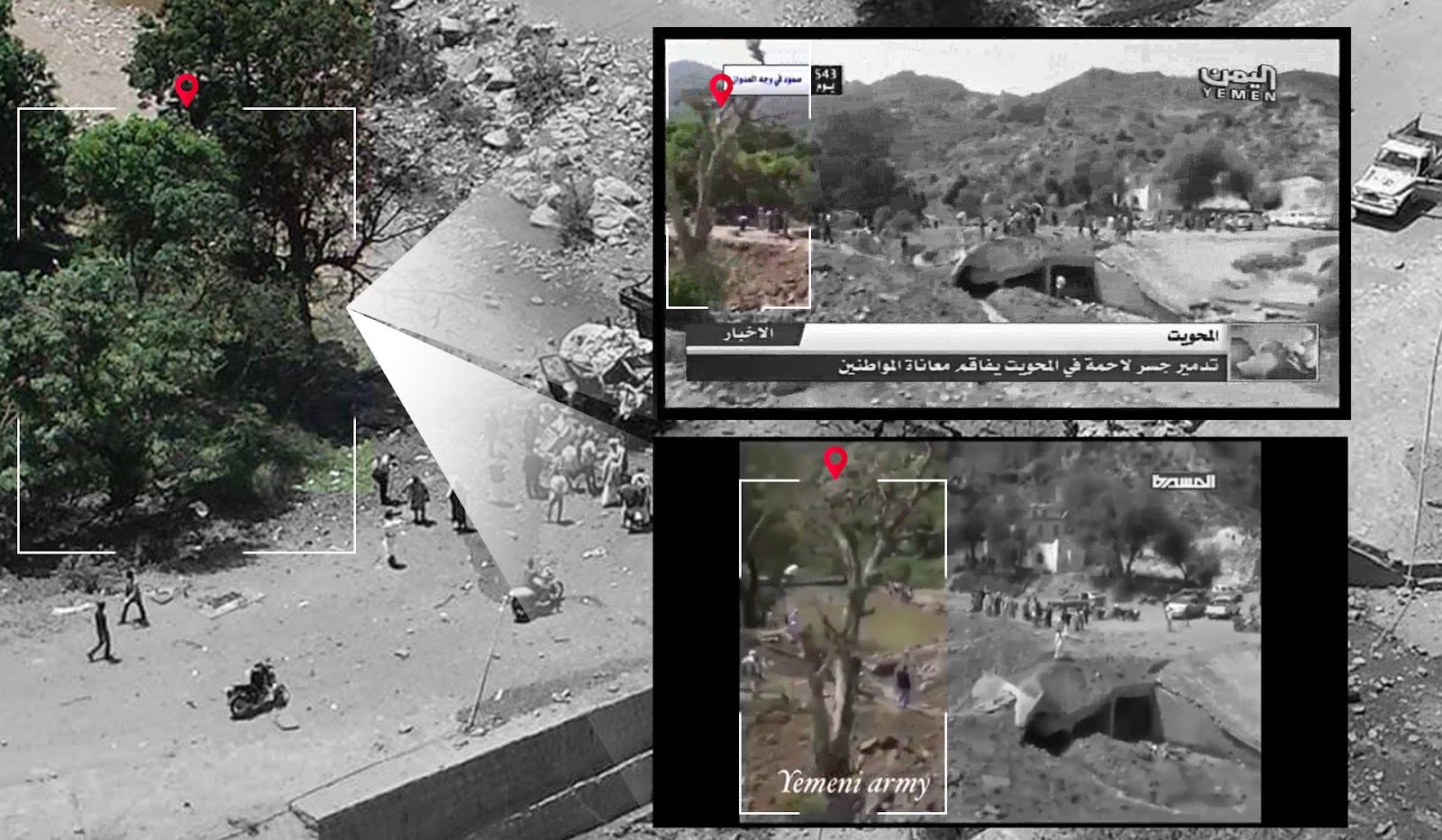 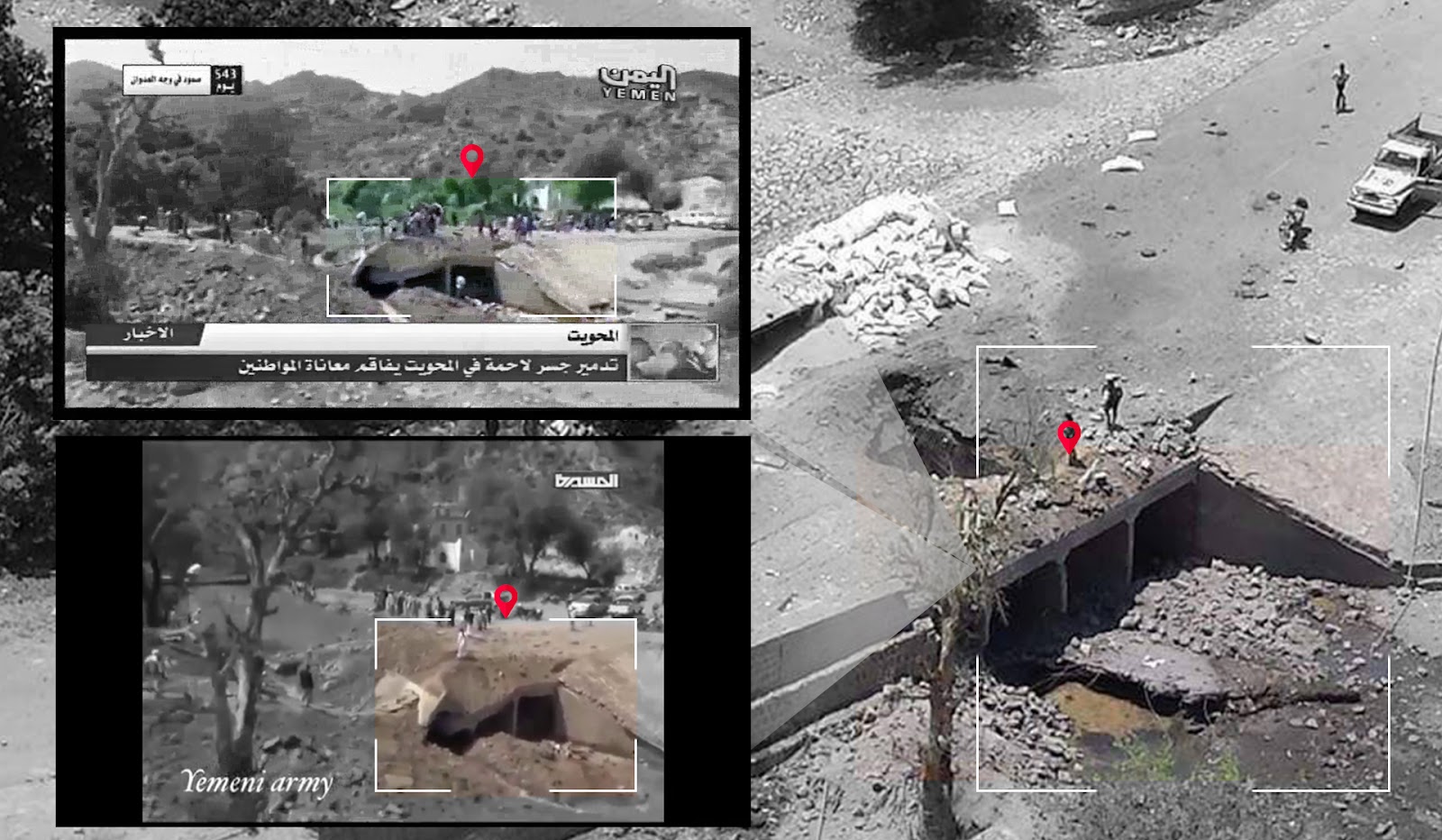 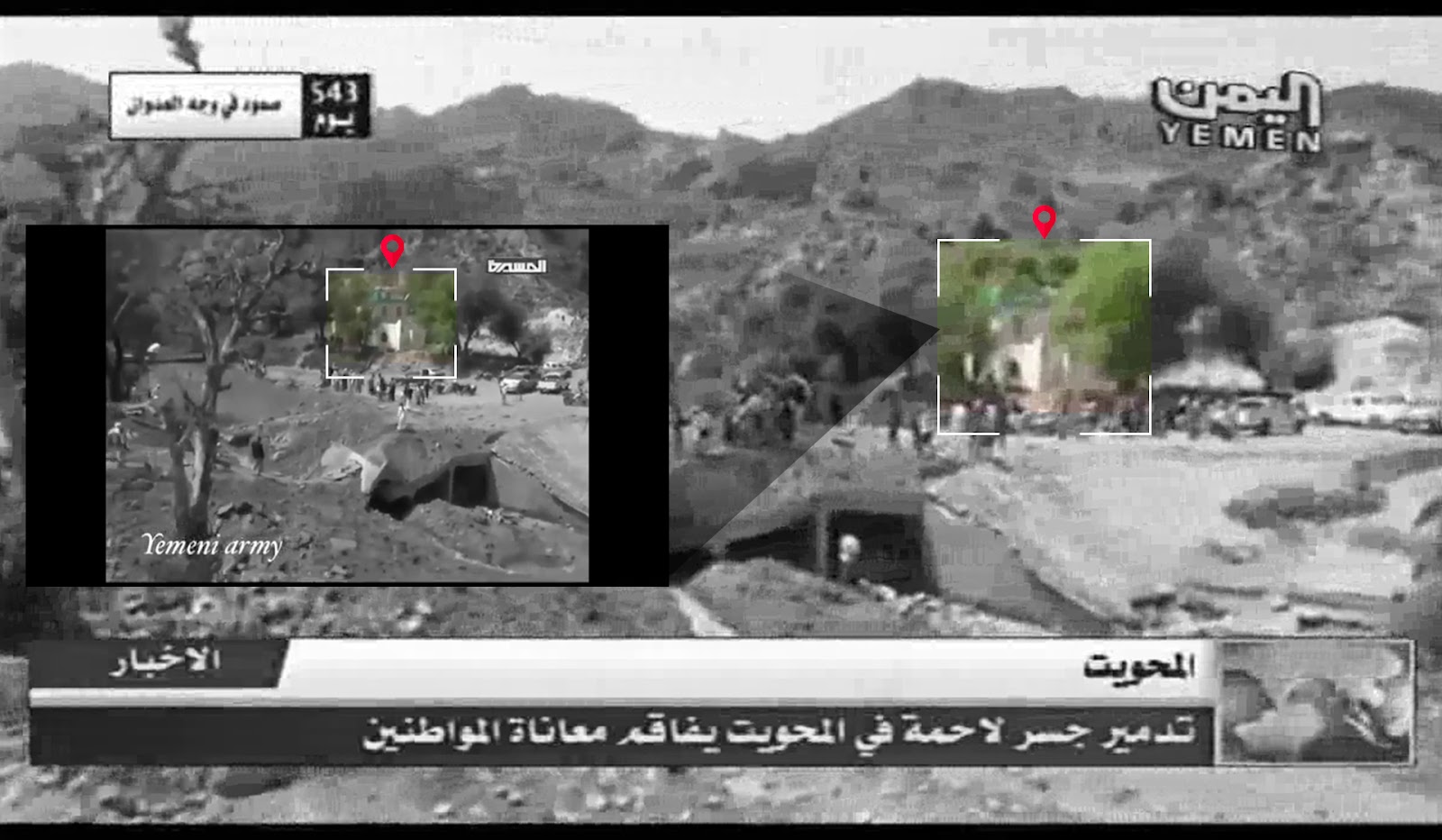 Moreover, matching landmarks of a popular market meters above the bridge, and a number of different buildings in white and gray are also shown, were published by separate sources ( video by “Yemen Today Tv on Youtube, Video by Al-Masirah TV), and taken from different angles. Other footages also show a small building higher than the mosque, (outlined in yellow), can be seen in Video by “Yemen Today” TV on Youtube and in a tweet posted by a local source “Abbas Ali” on Twitter. The two footages were published on September 18, 2016 after the fifth attack. 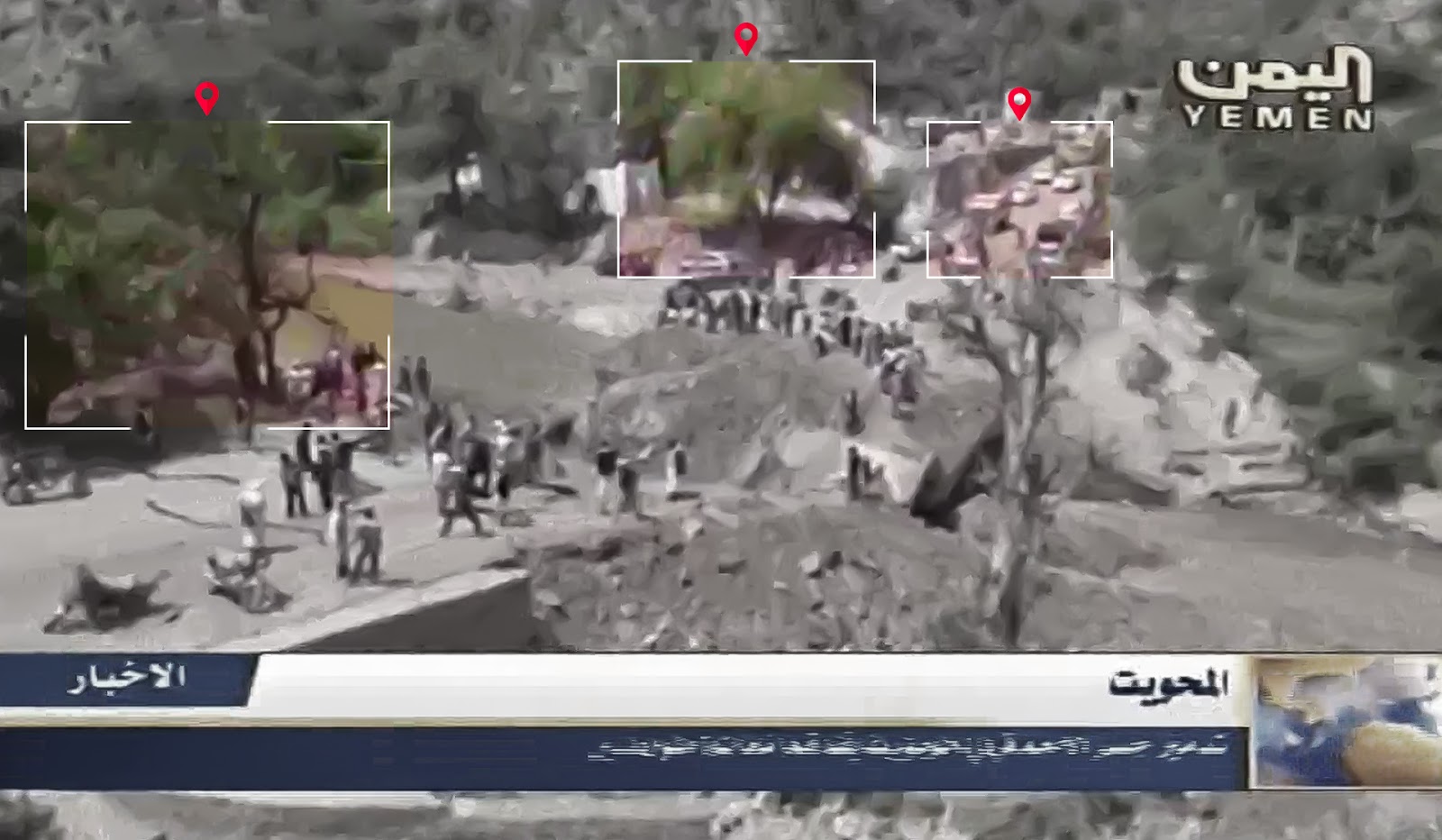 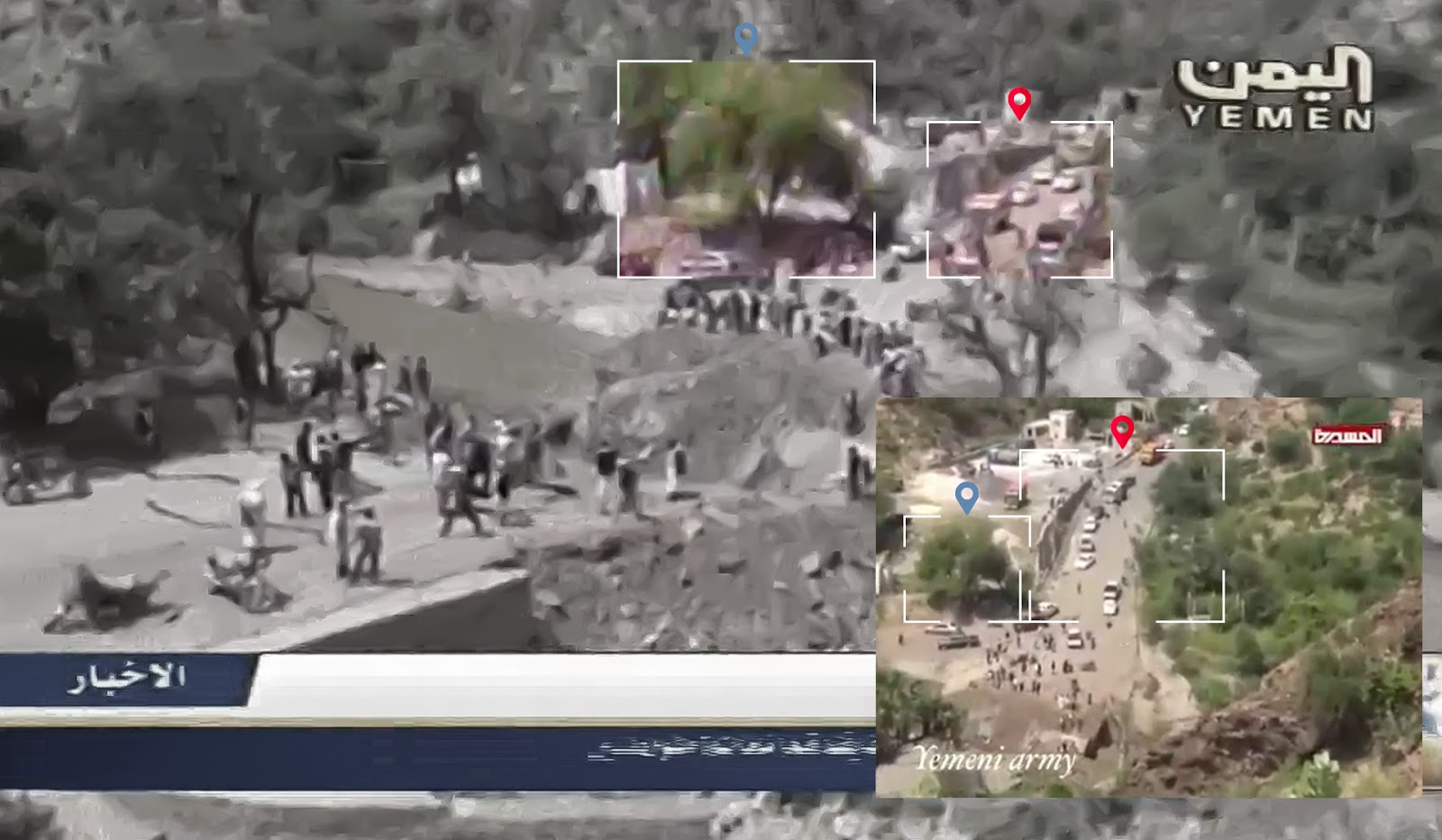 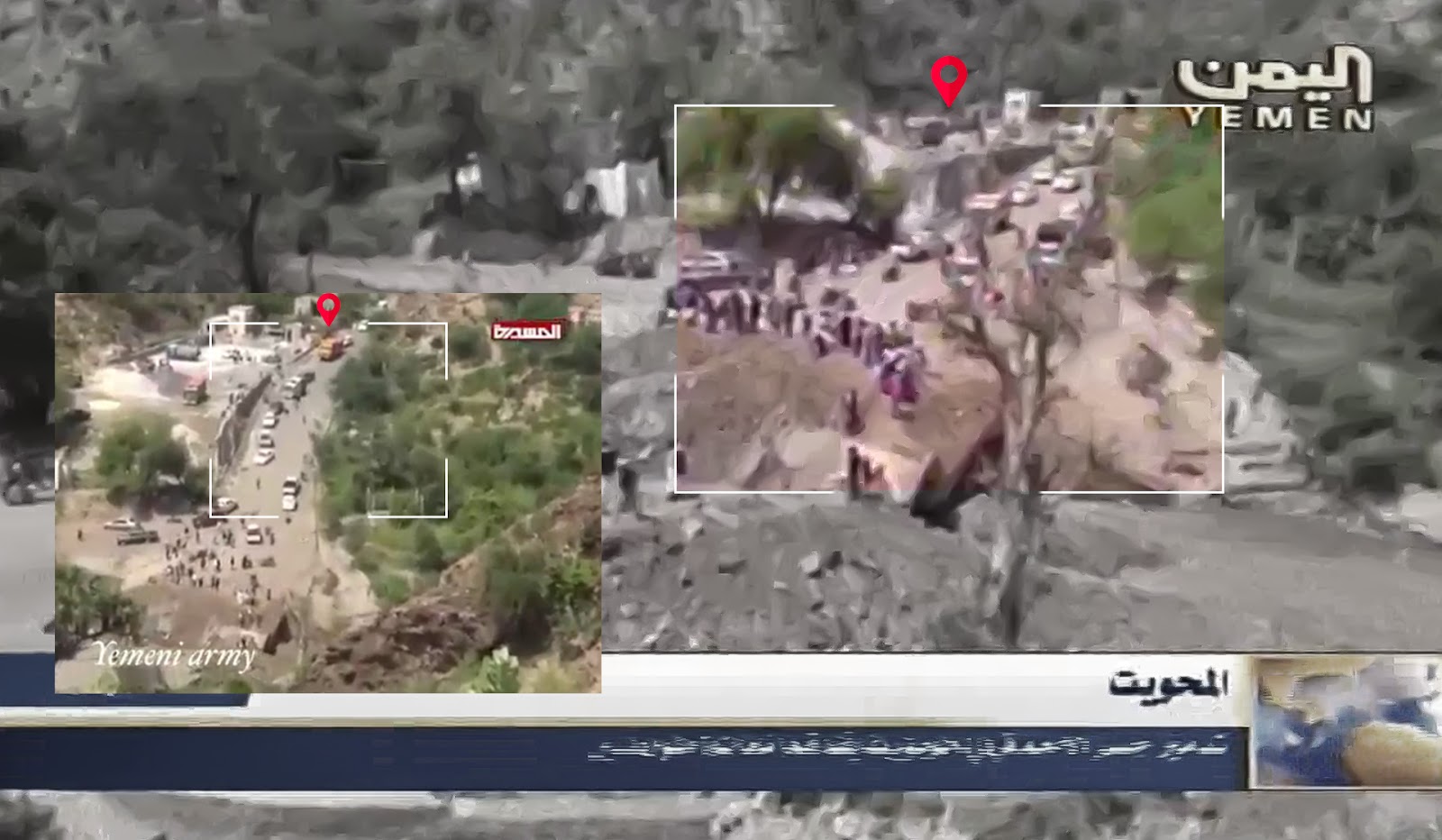 While searching, Yemeni Archive found a video by “Aden TV” on Youtube, of a visit by the Governor of the Al-Mahwit Governorate in 2018 to check on Lahmah bridge and the damage it sustained from flooding. Similar to other analyzed videos, the small mosque appears next to the bridge further confirming the landmarks shown in previous videos and photos of the attack site. 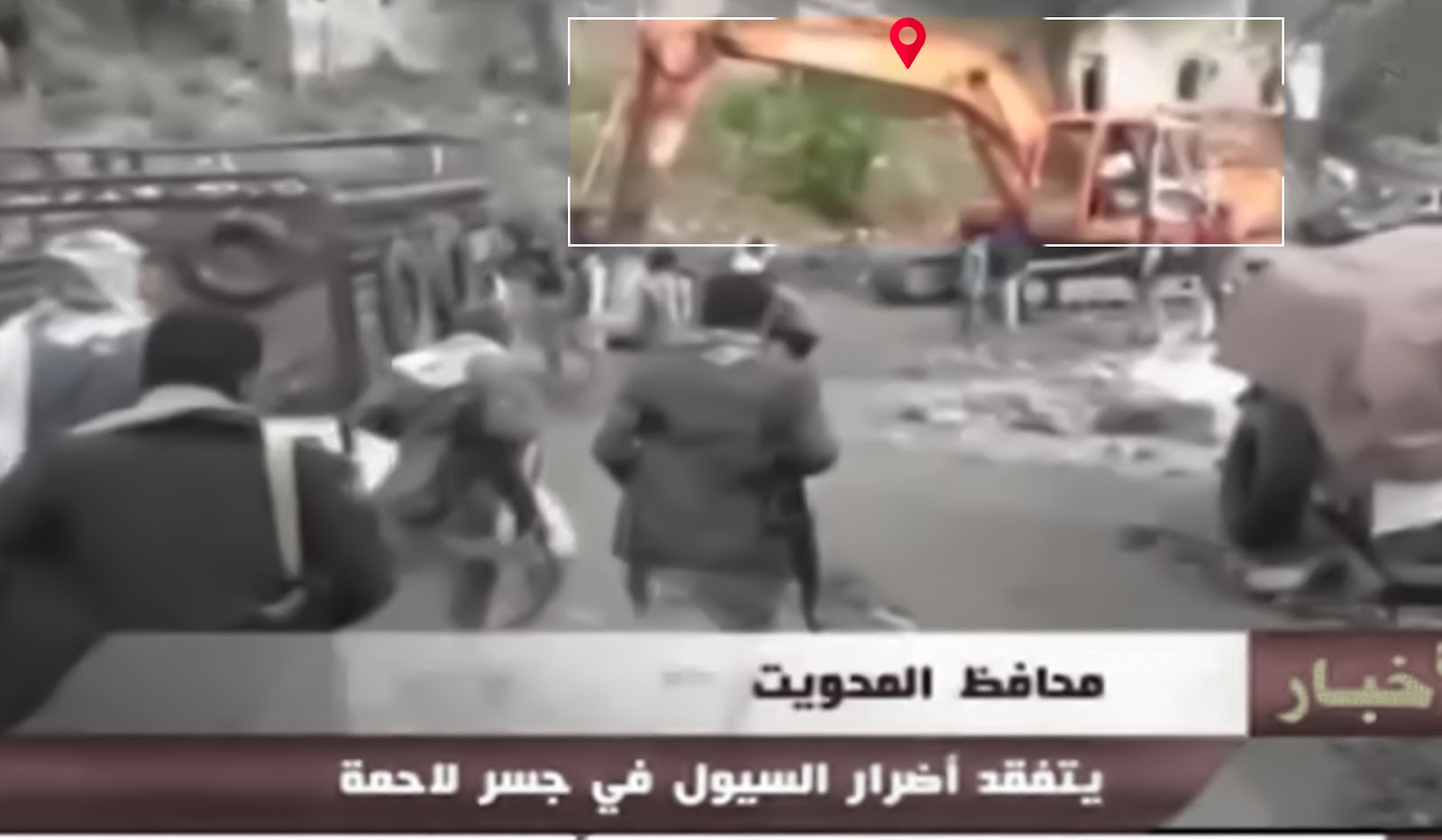 In the following comparison, the features of the bridge, the mosque, and hills in the back shown in a screenshot from Video by Yemen news” TV on Youtube, match Google Earth’s terrain view imagery of the same location. 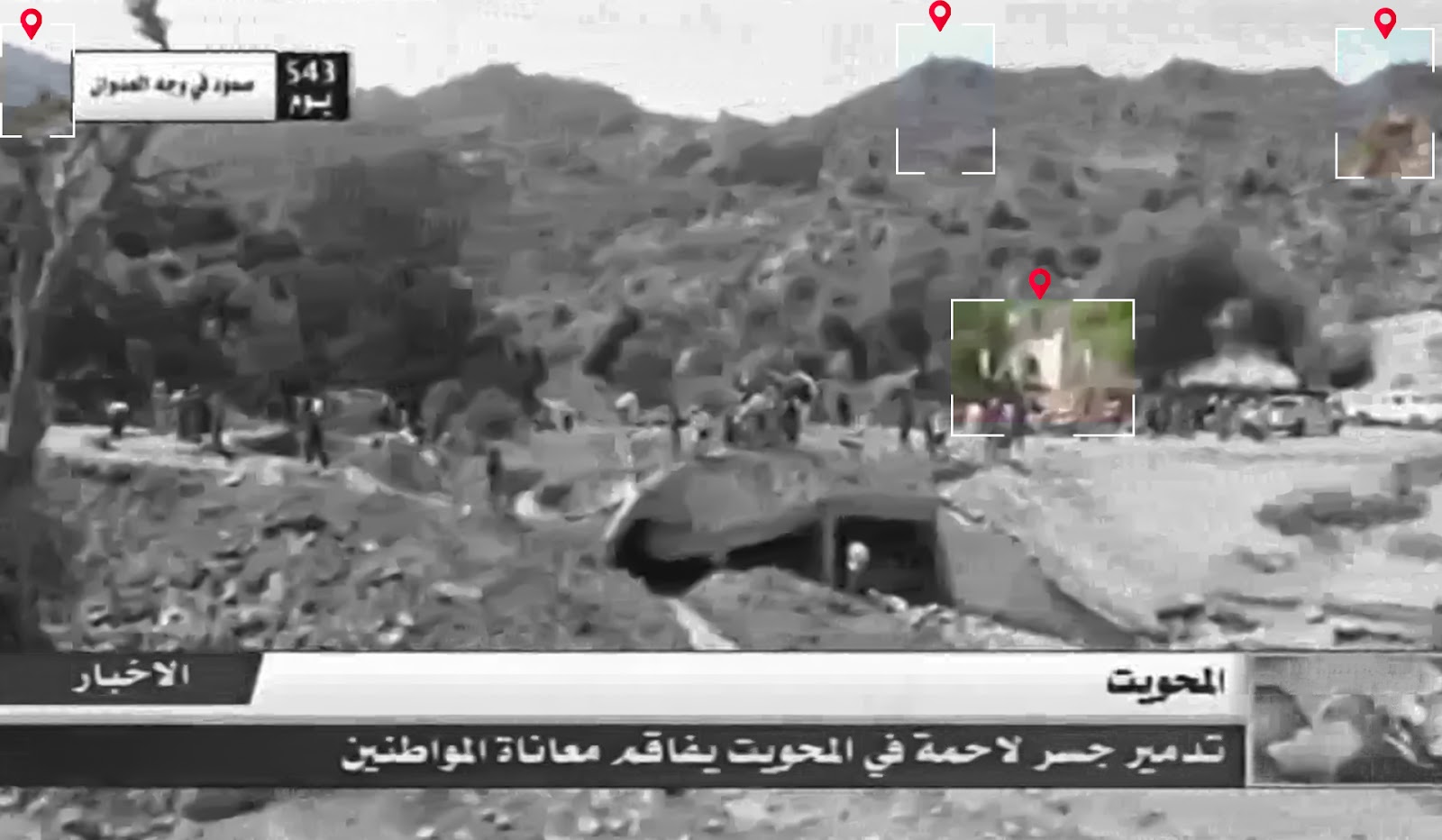 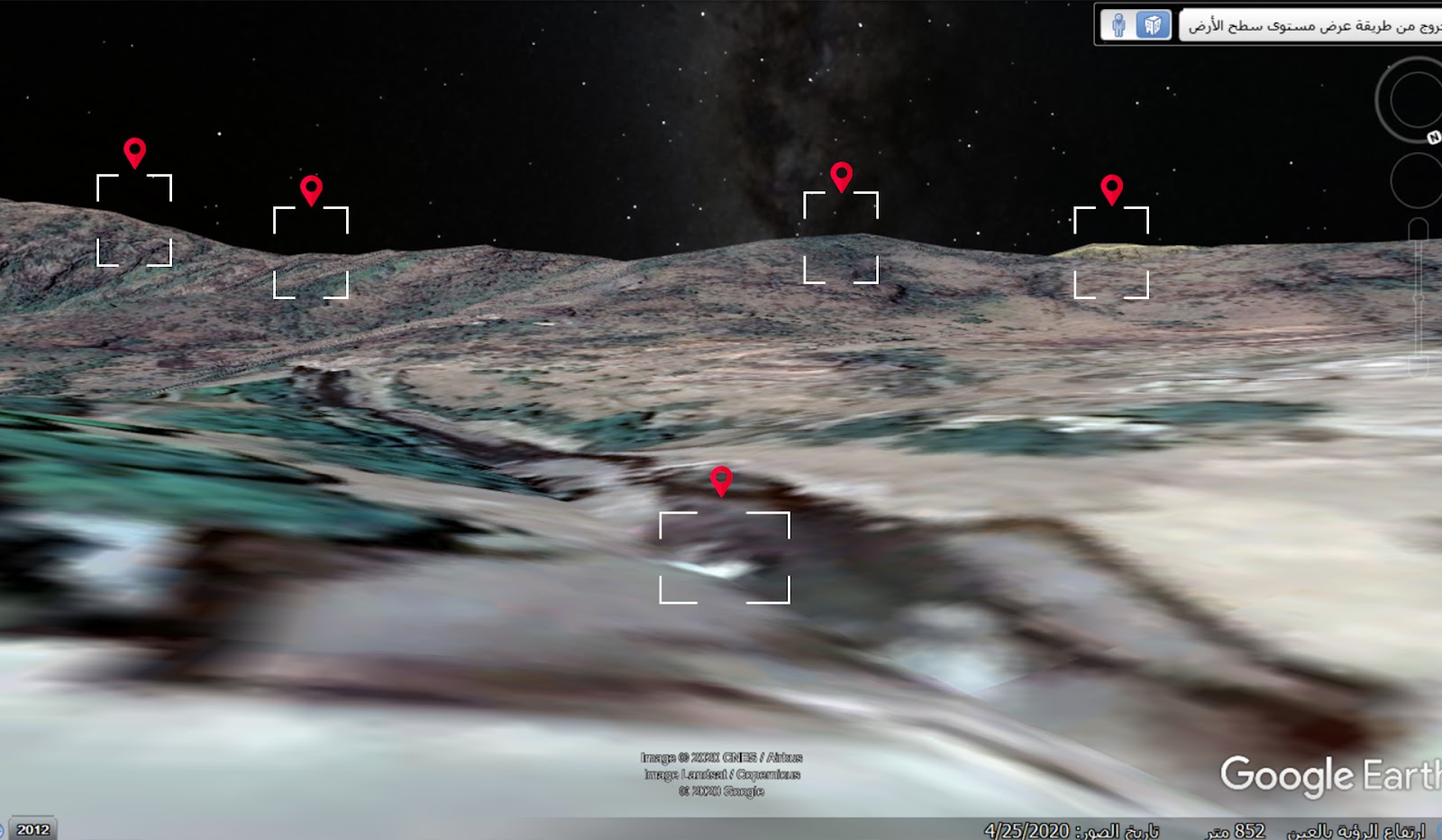 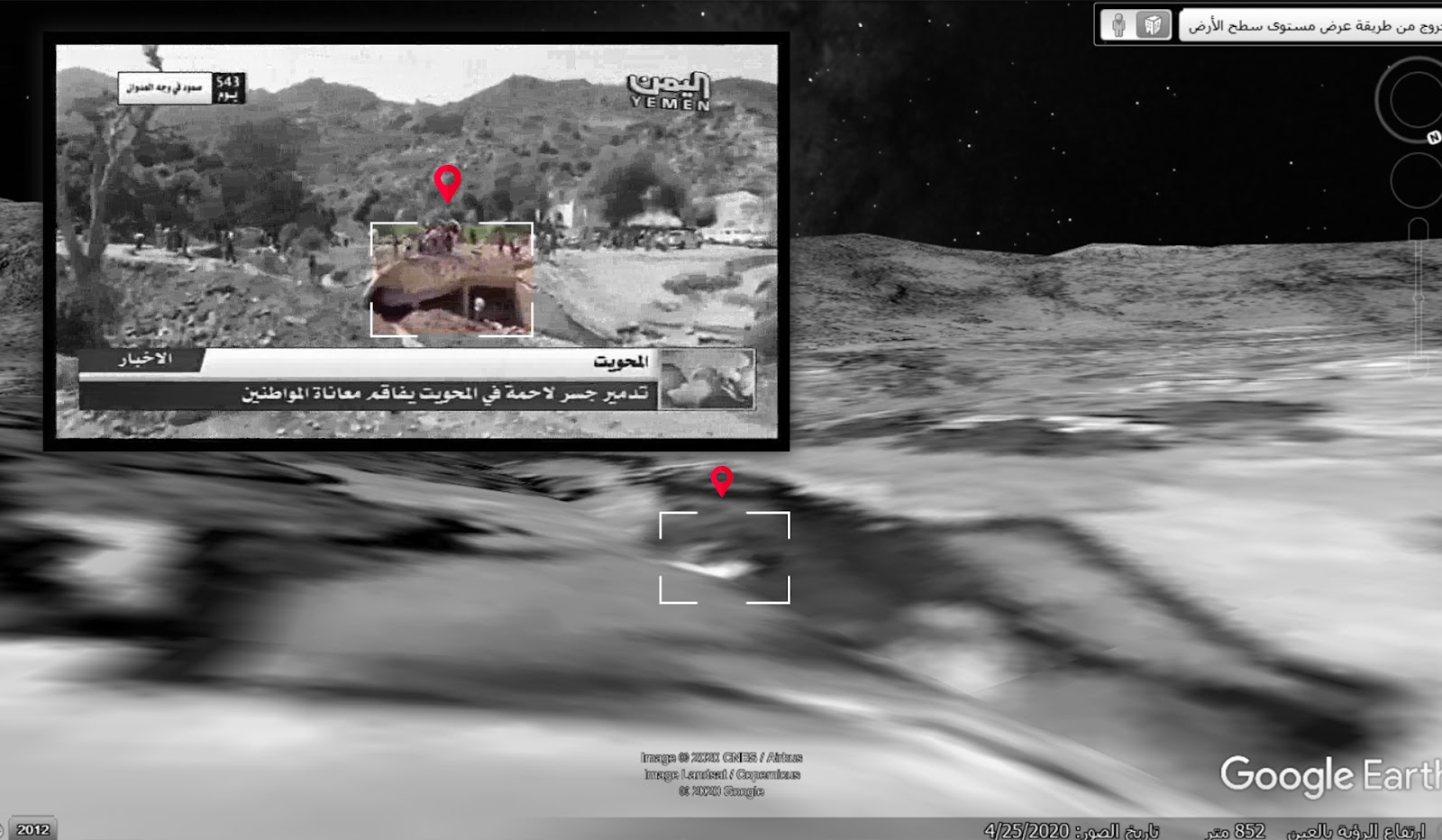 A screenshot from the previous video by “Yemen news” TV on Youtube, and behind one of the local resident standing in front of the bridge, also shows a white building behind trees and near the road, which all the geographic features and landmarks shown in the open-source content posted about the incident match the satellite imagery from Google Earth. 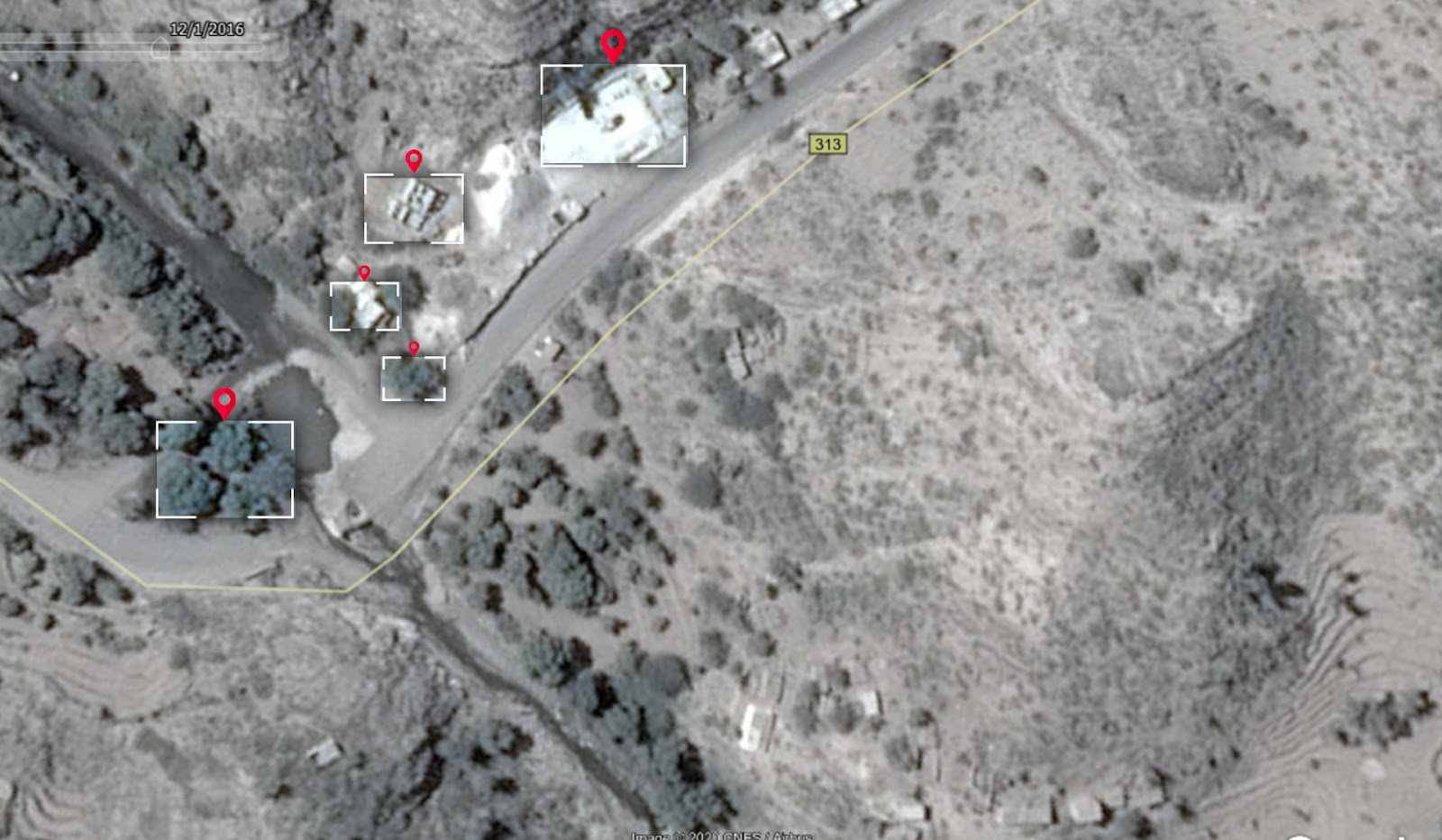 Satellite image of the area by Google Earth.

Pictures published by the “Al-Mahwit District Local Council” Facebook page after the second attack on August 29, 2016 show remnants of an unexploded missile that reportedly landed on the same day in an area near the bridge.

According to reports by local organizations, the remnants of the missile match that of

The “Arab Defense Forum” stated that a missile factory producing “Mk 80 guided air bombs” was opened by the “Military Industries Corporation” in Saudi Arabia. Before that, Saudi Arabia had purchased and imported thousands of these types of missiles, according to documents published on “The New Arab” news site. 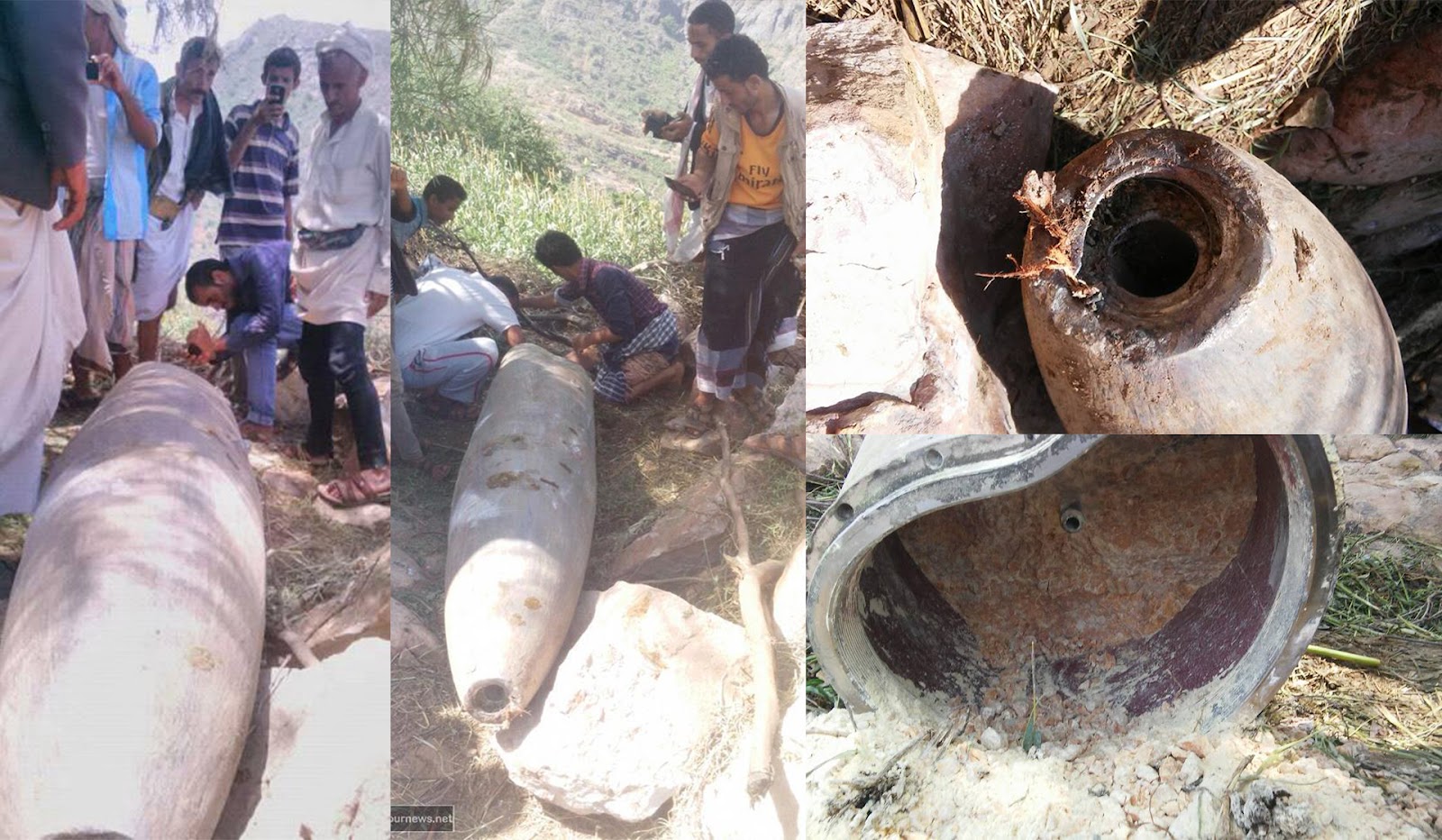 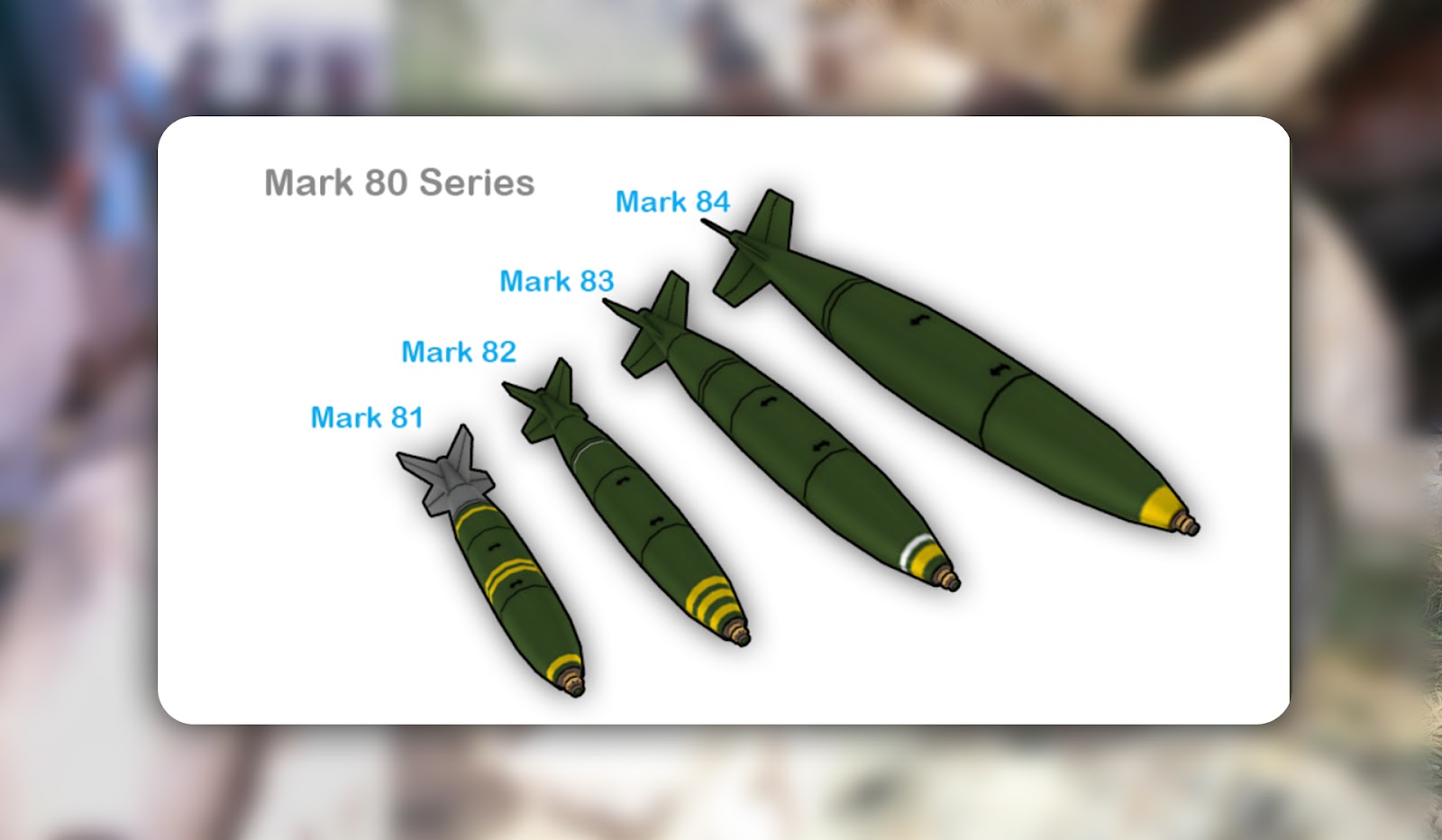 A picture of the “MK 80 guided air bomb” published by the “The New Arab” news site. 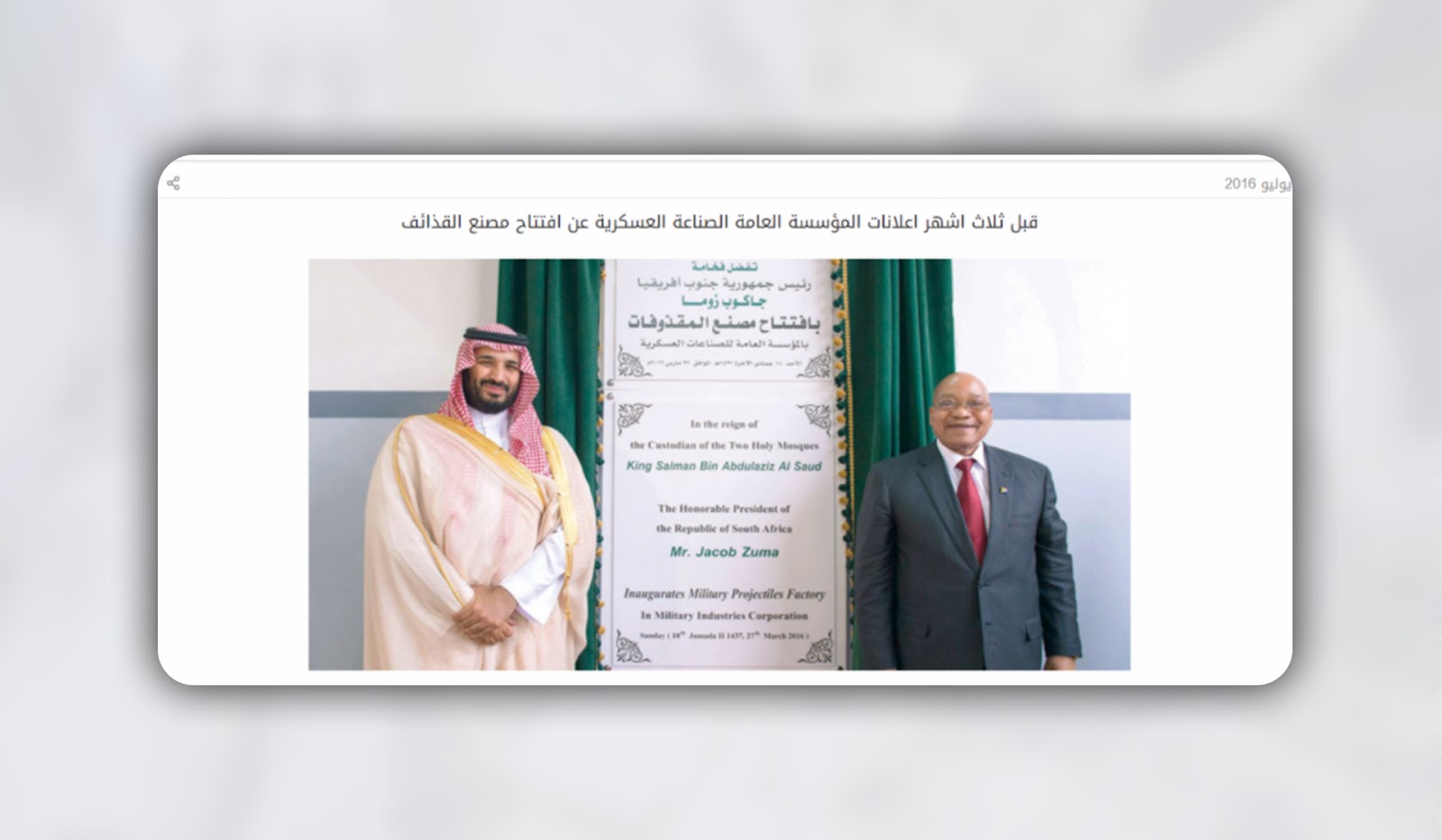 A picture published by the “Arab Defense Forum.” 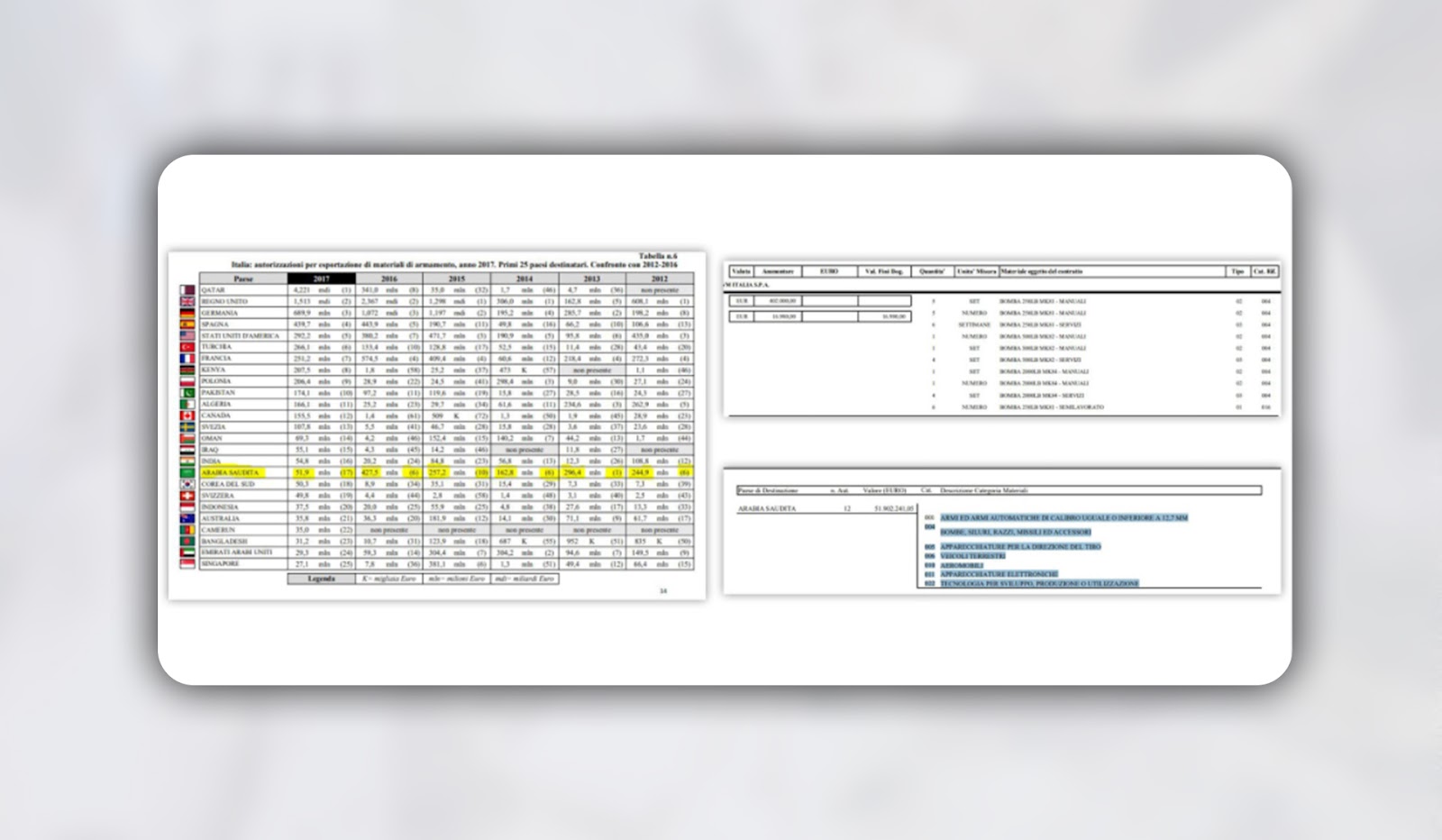 The footage posted online after the various attacks show that the bridge was gradually destroyed by the five aforementioned incidents. The footage in Video by “Yemen Today” TV on Youtube, which is from the first attack on September 15, 2015, shows the possibility of vehicles crossing the bridge despite it being targeted and partially damaged. 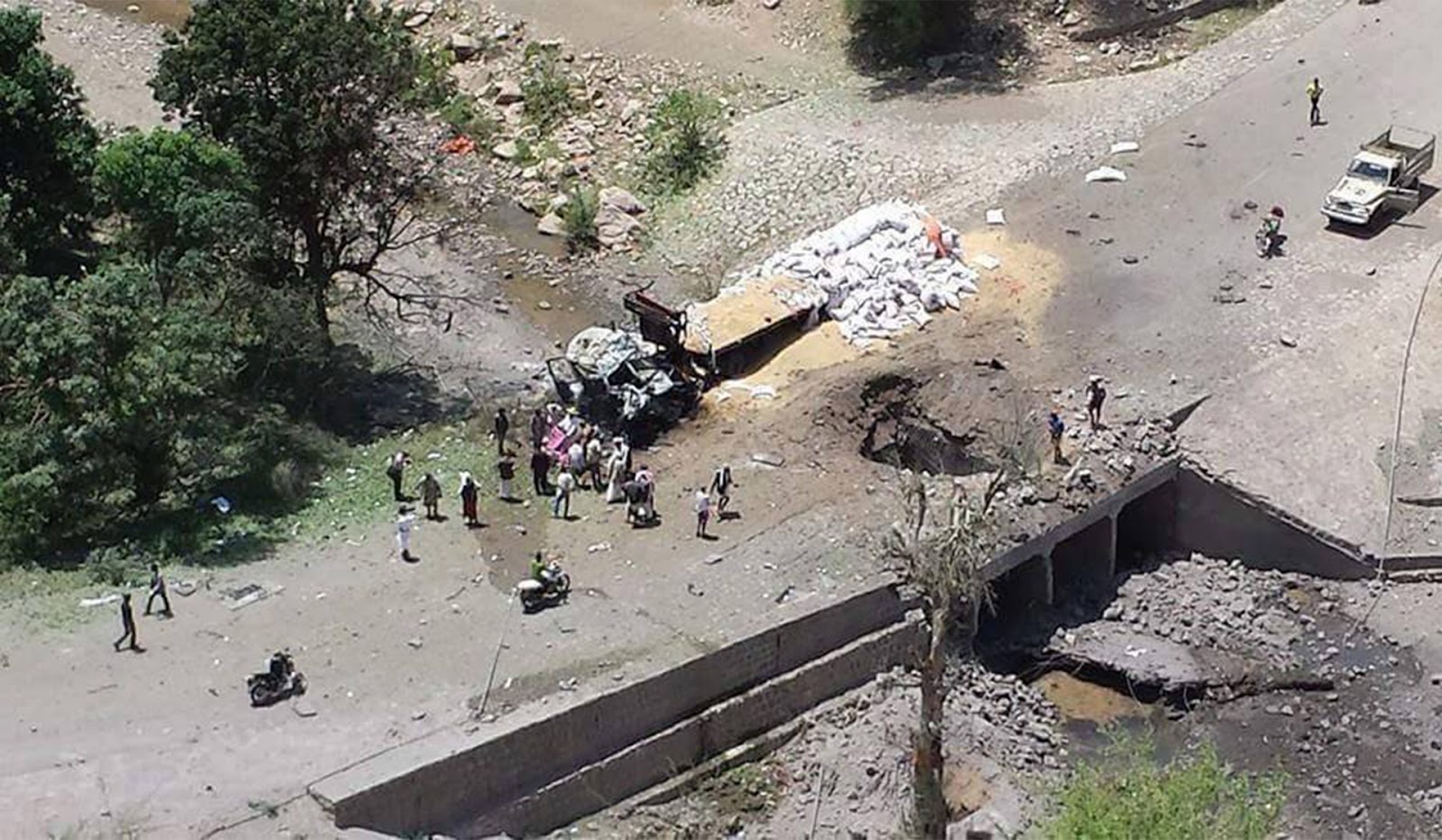 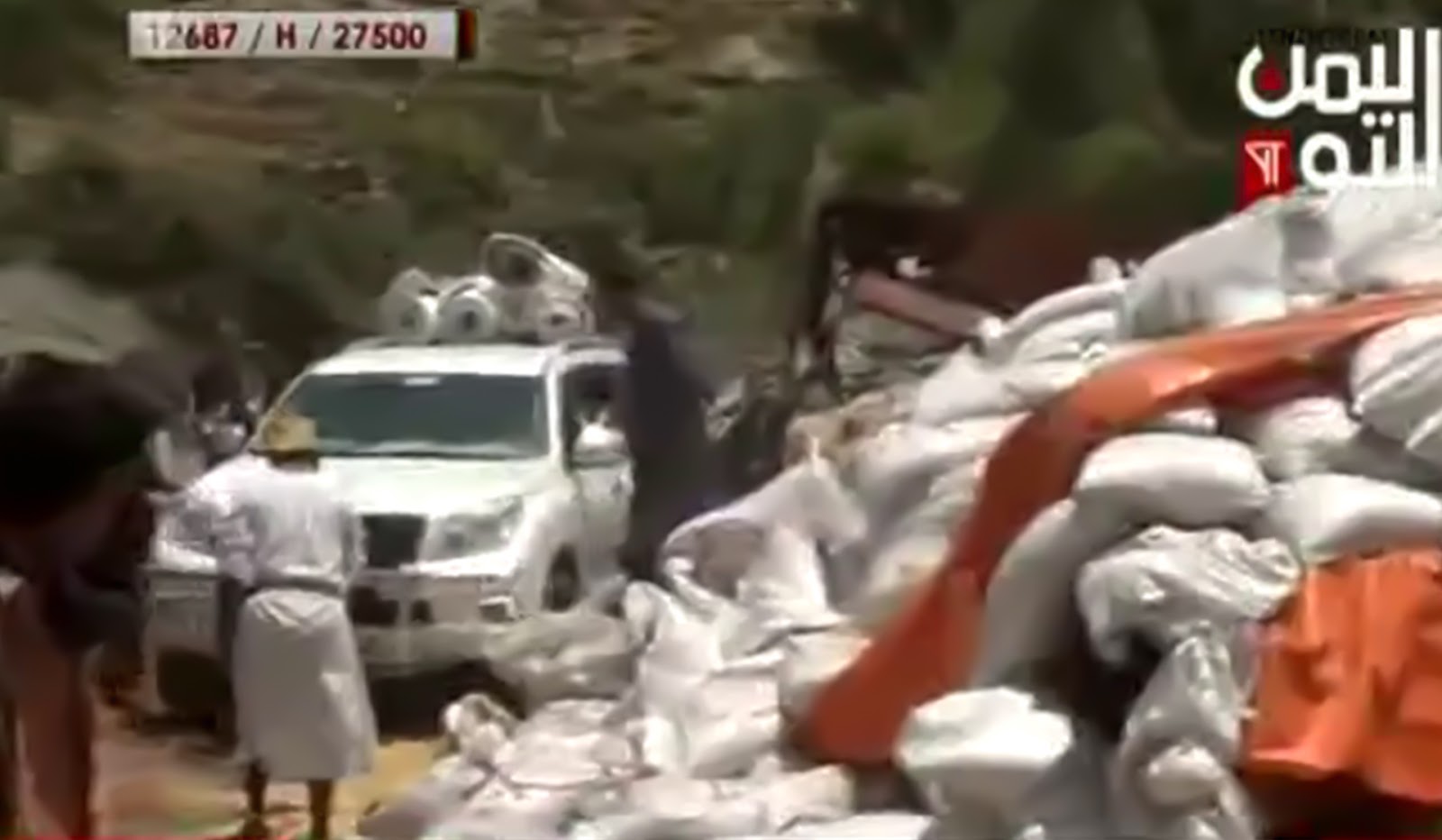 Archive footage in Video by“Yemen Today” TV on Youtube, which was published after the fourth attack.

Moreover, after the second attack the bridge was not completely destroyed as shown in photos published by the “Al-Mahwit District Local Council” on Facebook on August 29, 2016. 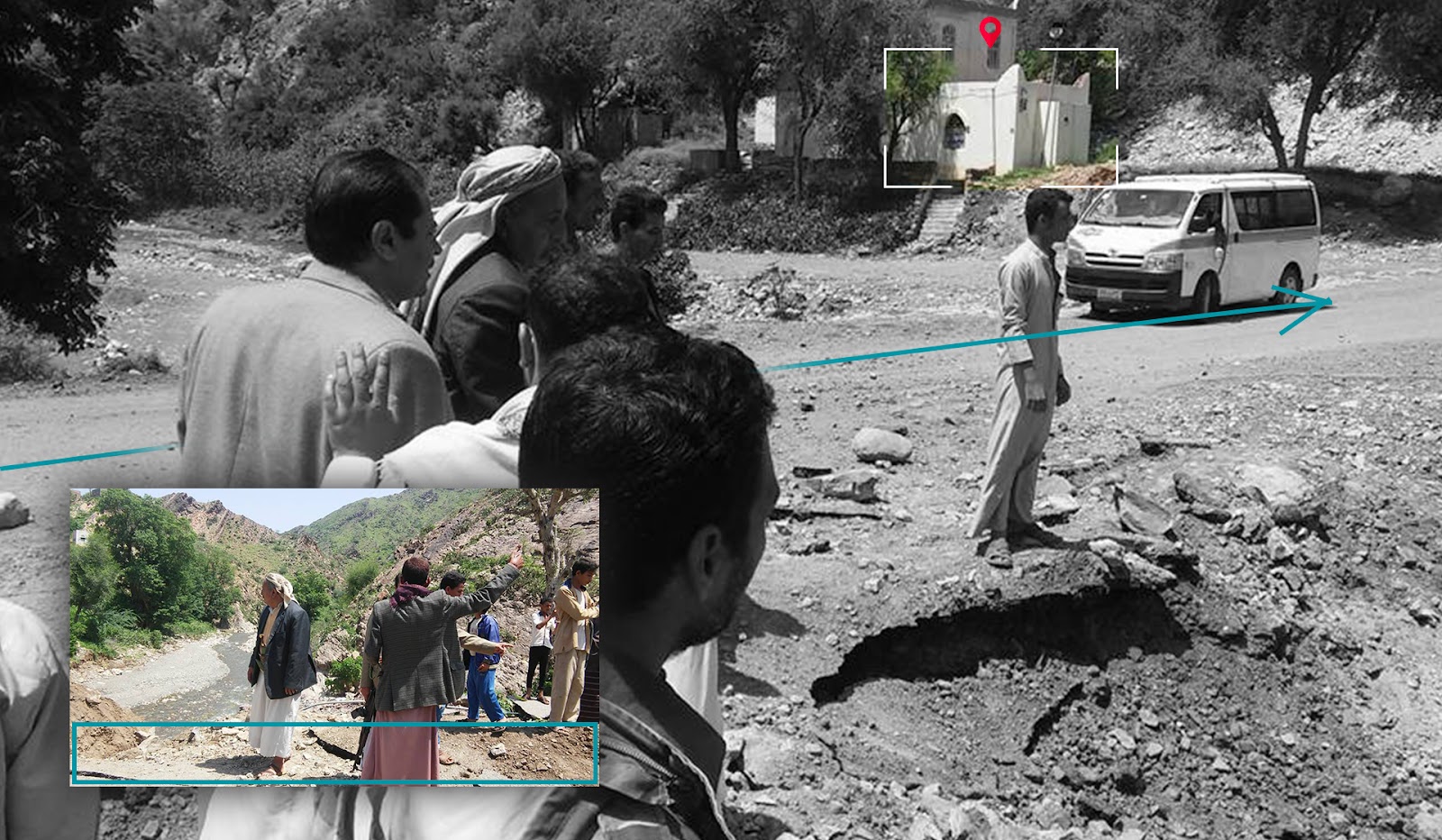 In the photos from the fourth attack published by the “Al-Mahwit District Local Council” on Facebook, and dated September 8, 2016, residents are shown standing on the bridge indicating that it is still only partially damaged. 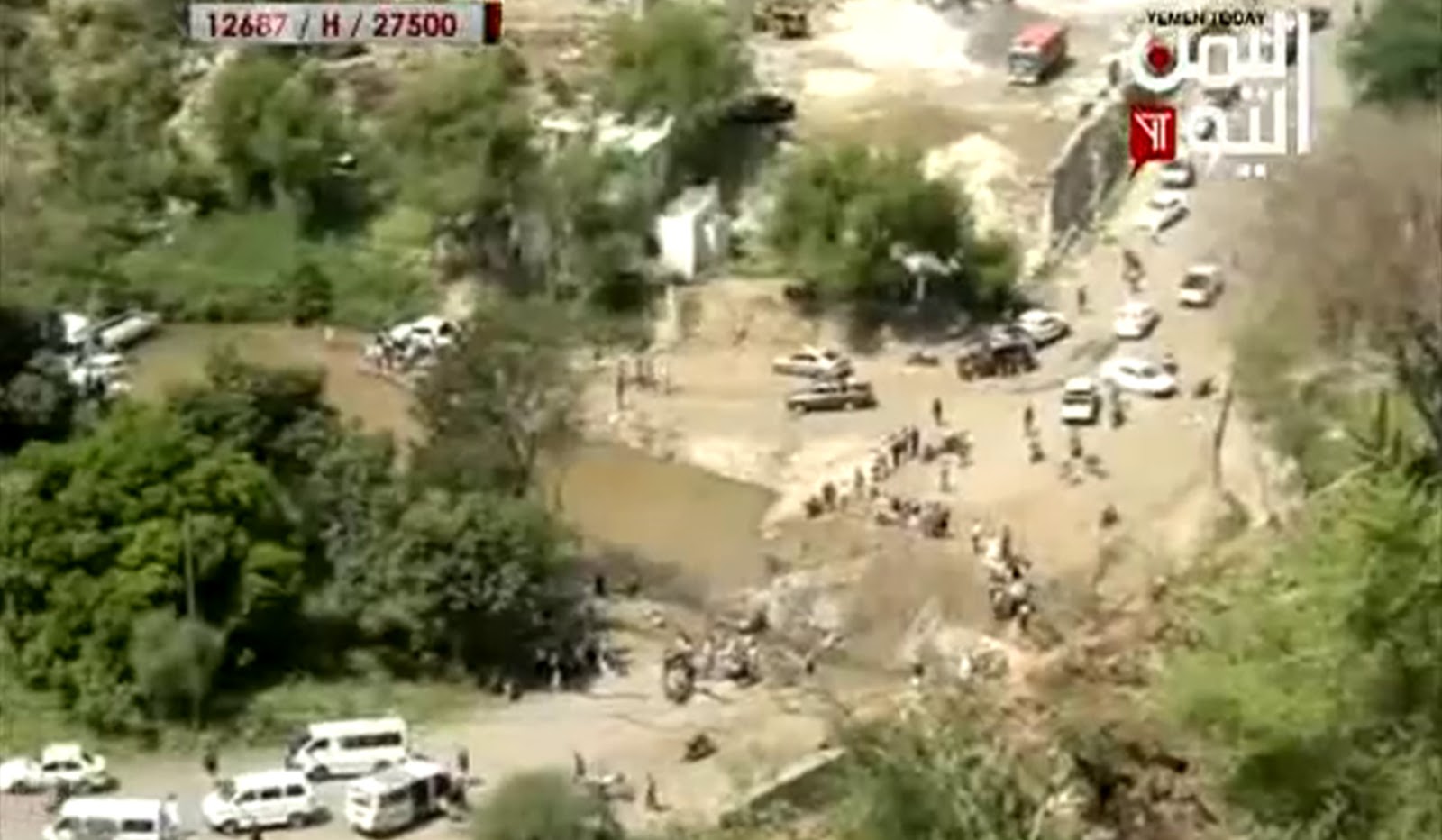 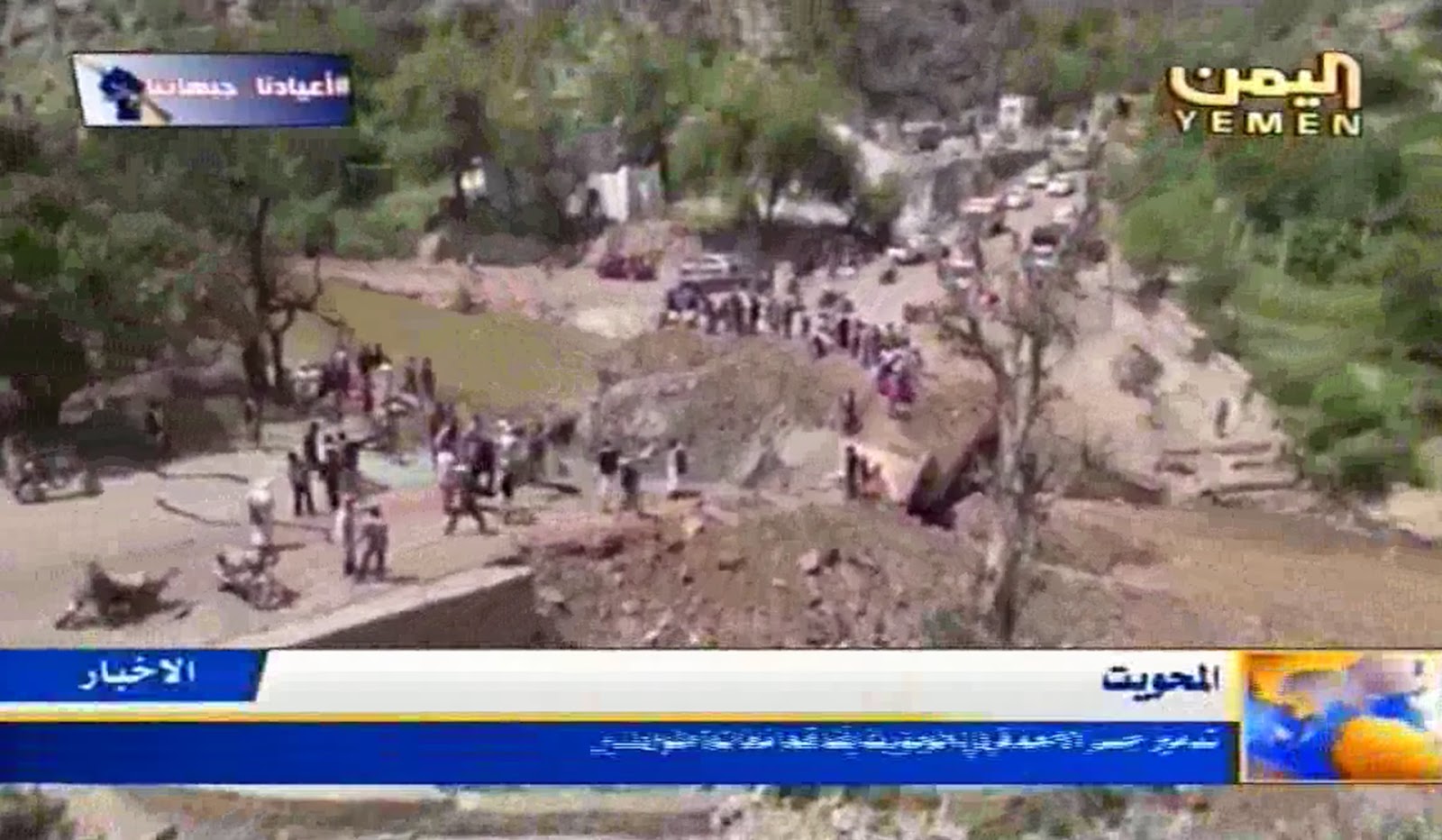 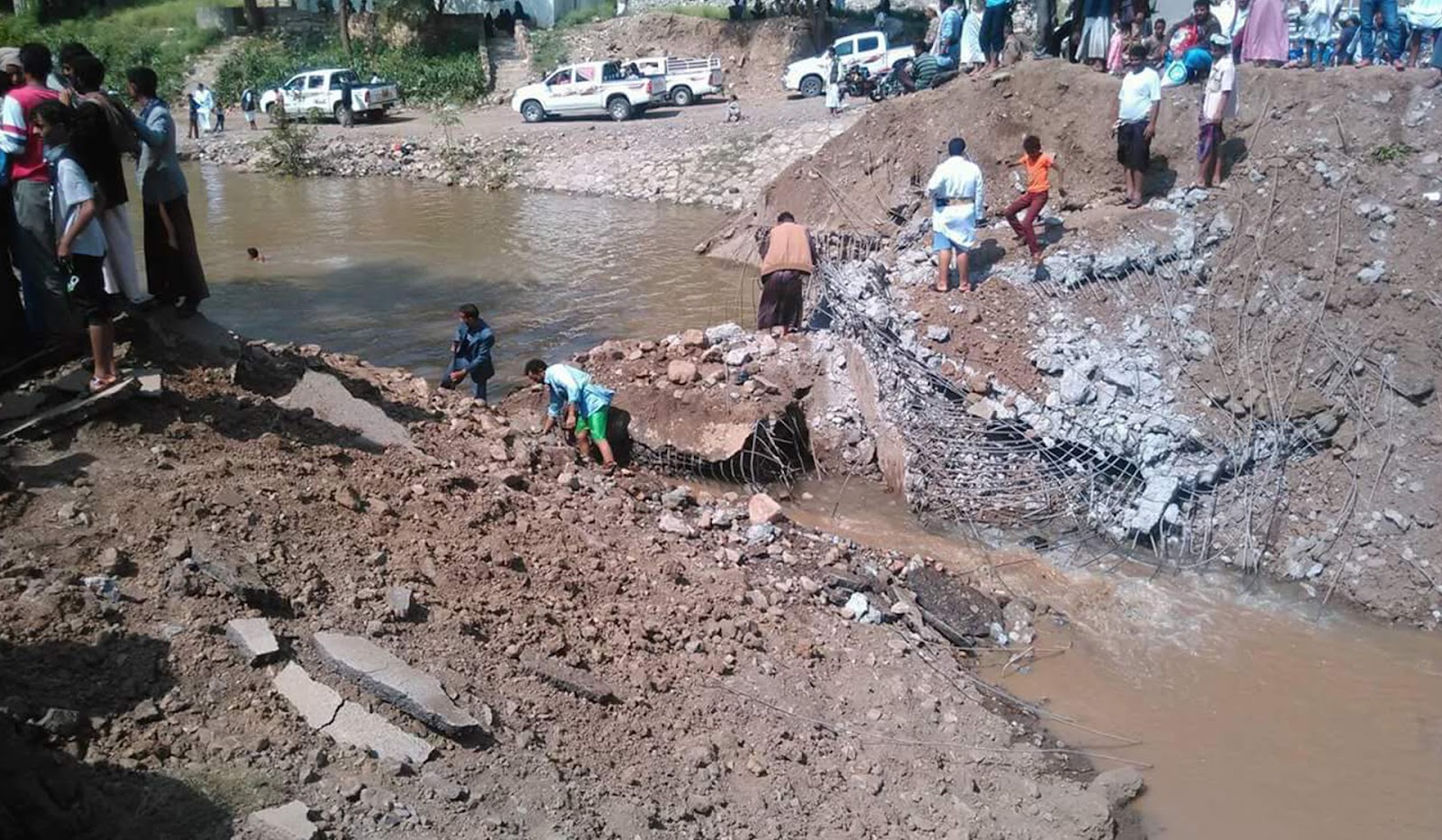 A picture by a local source “Abbas Ali” on Twitter.

There are no official statistics on the number of those killed in the five incidents, but multiple sources confirm that a truck driver was killed on the first attack on September 15, 2015 while crossing the bridge. 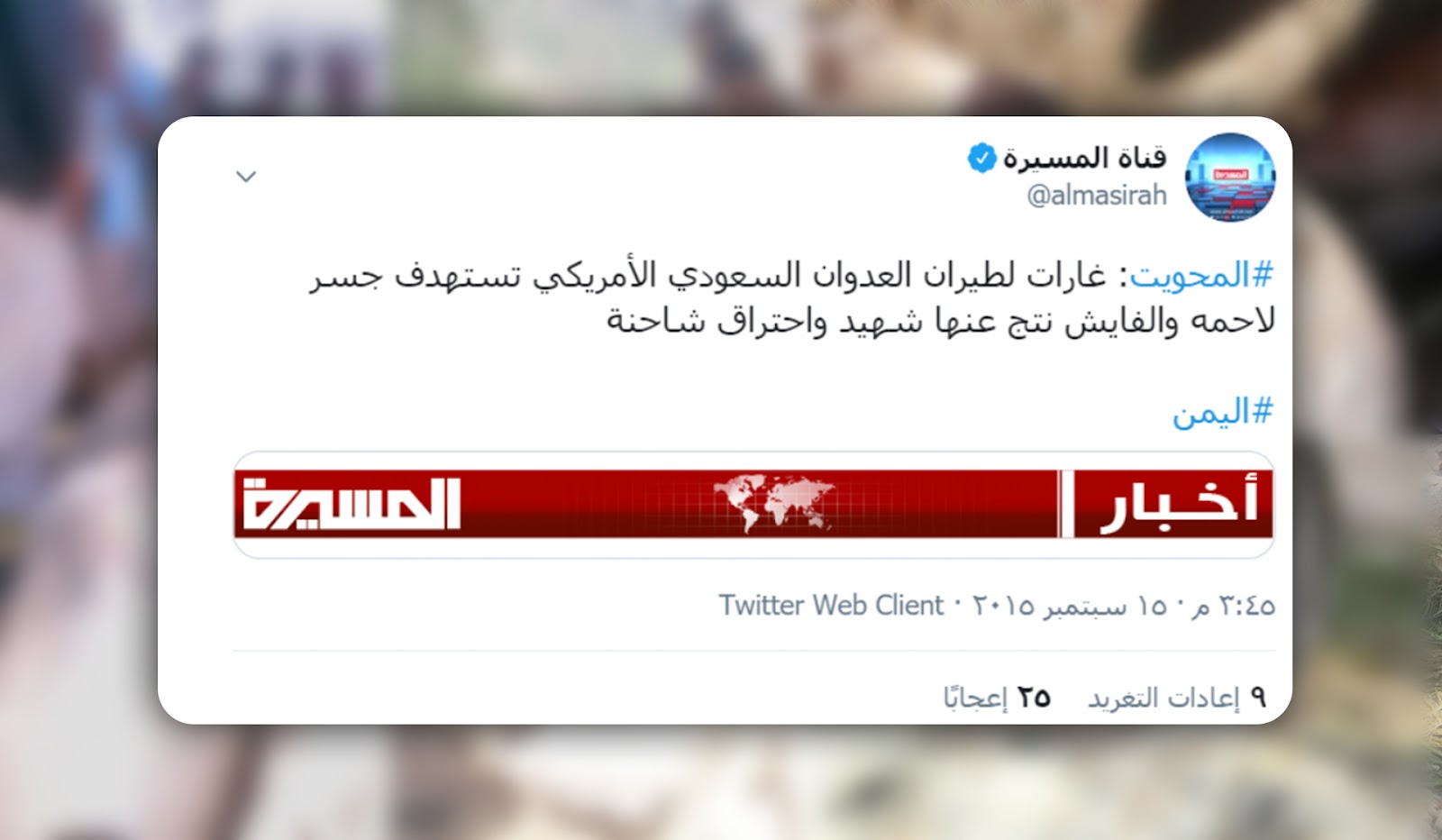