several bridges on the main roads in Al-Dhalea destroyed

several bridges on the main roads in Al-Dhalea destroyed

Blasting bridges (flood water bridges) on the main roads in Al-Dhalea Governorate; during the escalation of military actions in 2019, made the movement of civilians more difficult, and changed the route of trucks through the main Sanaa-Aden road, which is one of the most important transport routes in Yemen. Then those roads were closed permanently, because some of them are located on the lines of engagement between government forces and “Joint Forces” on the one hand and “Ansar Allah” (the Houthis) on the other.

Al-Dhalea governorate is located in southern Yemen and has an important strategic location linking the southern and northern governorates, and it has borders with the governorates of Taiz - Lahj - Ibb - Al-Bayda, from the four directions. The shortest main roads between Sanaa and Aden pass it, so it became at the heart of the military battle, as Houthi forces took control of it while heading to Aden in the first quarter of 2015. Like the rest of the Yemeni governorates, an anti-Houthi armed resistance formed in Al-Dhalea, which was able in a short time to tighten control over Al-Dhalea city, the provincial capital, in May 2015. While the rest of the area in the governorate was subject to hit-and-run battles changing the map of military control, until it took a relatively stable status, shared by both parties. 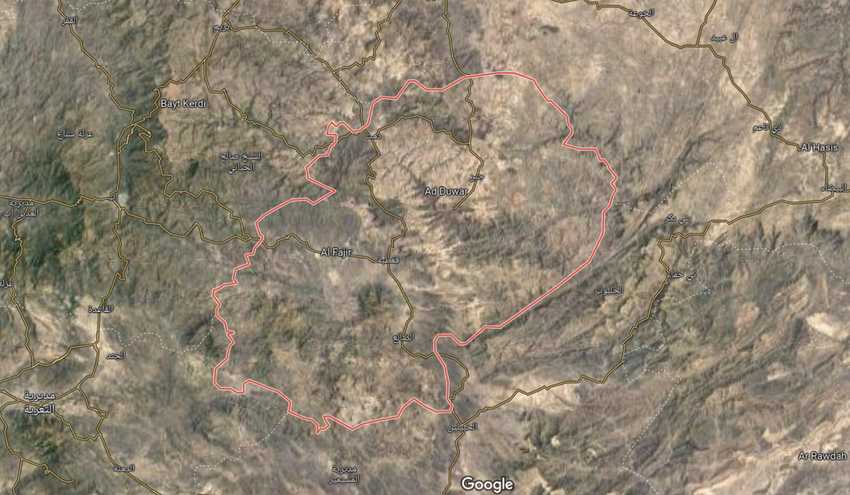 For two months in 2019, several bridges ´on the main roads linking the districts of Al-Dhalea governorate were blasted, in conjunction with military confrontations in the northern and northwestern part of the governorate. Specifically, on the roads from the Qataba city, which leads north to Maris - Damt - Sanaa, and west to Al-Fakher area and Ibb governorate.

Geographical location of the bridges

According to the available information about the blasting of several bridges on the main roads of Al-Dhalea governorate, there is visual content of three bridges, of which we were able to determine their geographical location: on Qataba - Damt road and Qataba - Al-Fakher road, which is Qardah Bridge and Al-Zayla Bridge, and a third in Shakhb area between Qataba and Al-Fakher.

Qardah Bridge, located less than 2 km north of Qataba, was blasted on 21 May 2019, at the time of battles after which the Joint Forces advanced in the area. YouTube accounts posted videos documenting the bridge and the surrounding area. The most prominent landmarks appeared in the Yemen Today video of a distinctive building near the bridge at coordinates: 13.869278, 44.703778. The bridge is located on the only M45 main road that connects Qataba, damt and the surrounding villages. While most of the other sub-roads are rough. The bombing of the bridge impedes the movement of civilian vehicles and large transport trucks coming from Aden to Sanaa and vice versa. 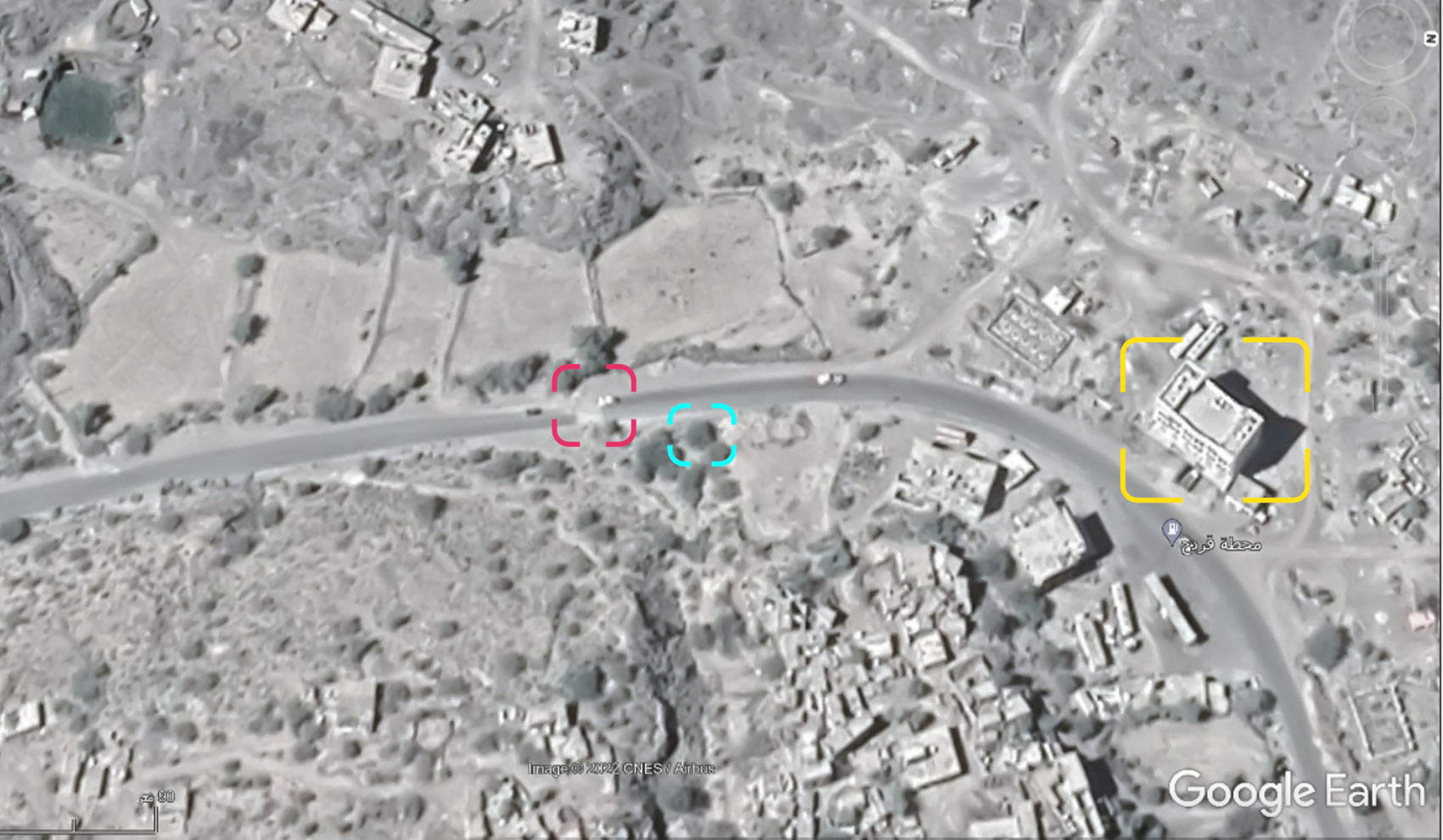 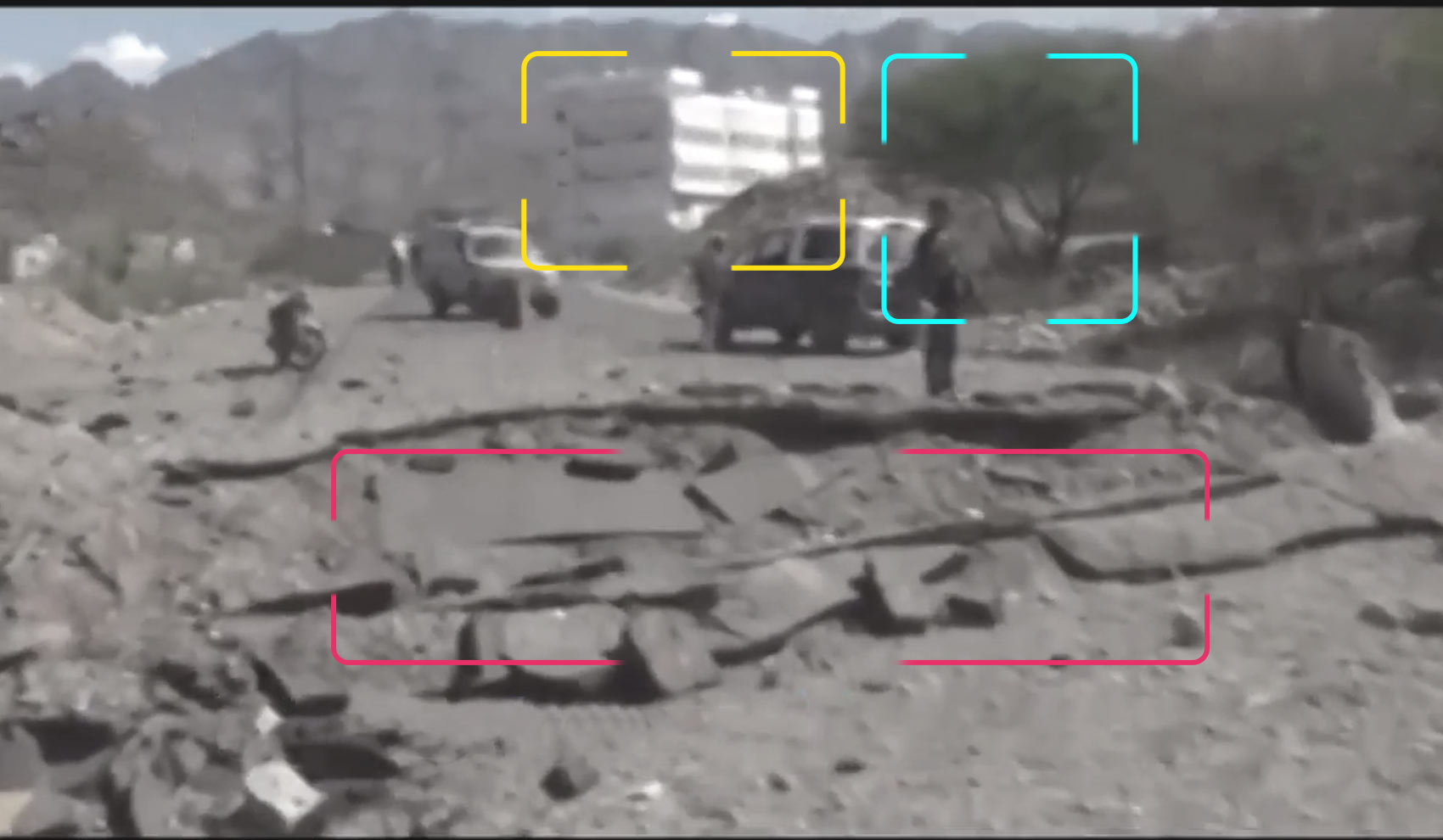 A screenshot from Yemen Today YouTube video of Qardah Bridge, and a satellite image of the Bridge location, Google Earth.

Al-Zayla Bridge is located north of Maris in an area on the main road separating government forces and Houthi forces. The bridge was blown up on 24 July 2019, according to a video posted by the Maris Press Facebook page, with the line of engagement there unchanged. The footage published by Maris Media YouTube showed another destroyed bridge a few metres away, in addition to booby-traps in car tires, according to the video, blocking the main road, at coordinates: 13.972444, 44.675500. Al-Zayla Bridge is located in the middle of the only M45 main road that connects Qataba and Damt, between two mountains. This location complicates the possibility of constructing an alternative secondary road the size of the destroyed part of the road, which impedes the movement of civilian vehicles and large transport trucks coming from Aden to Sanaa and back, or those travelling between the northern districts and Al-Dhalea. 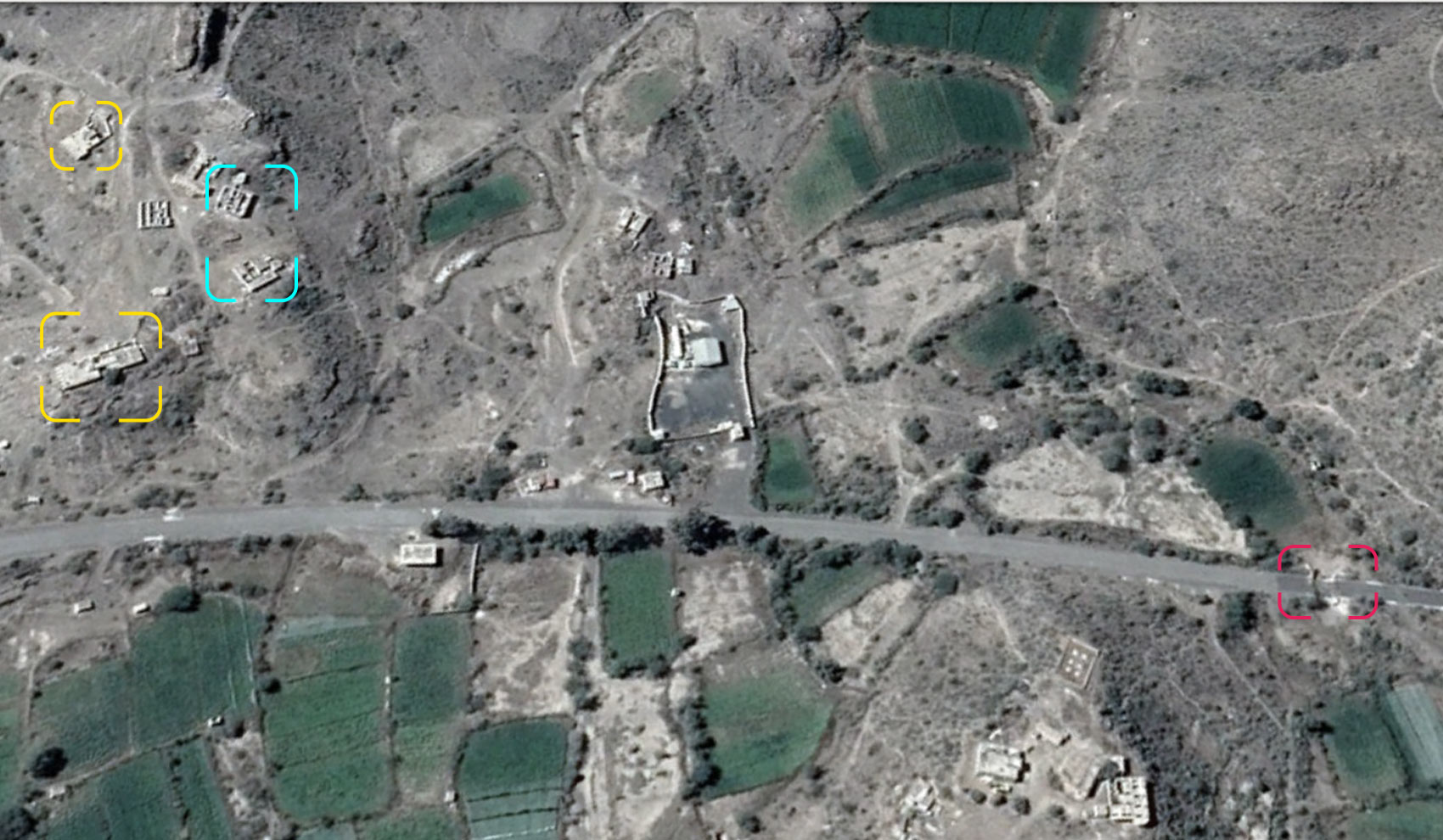 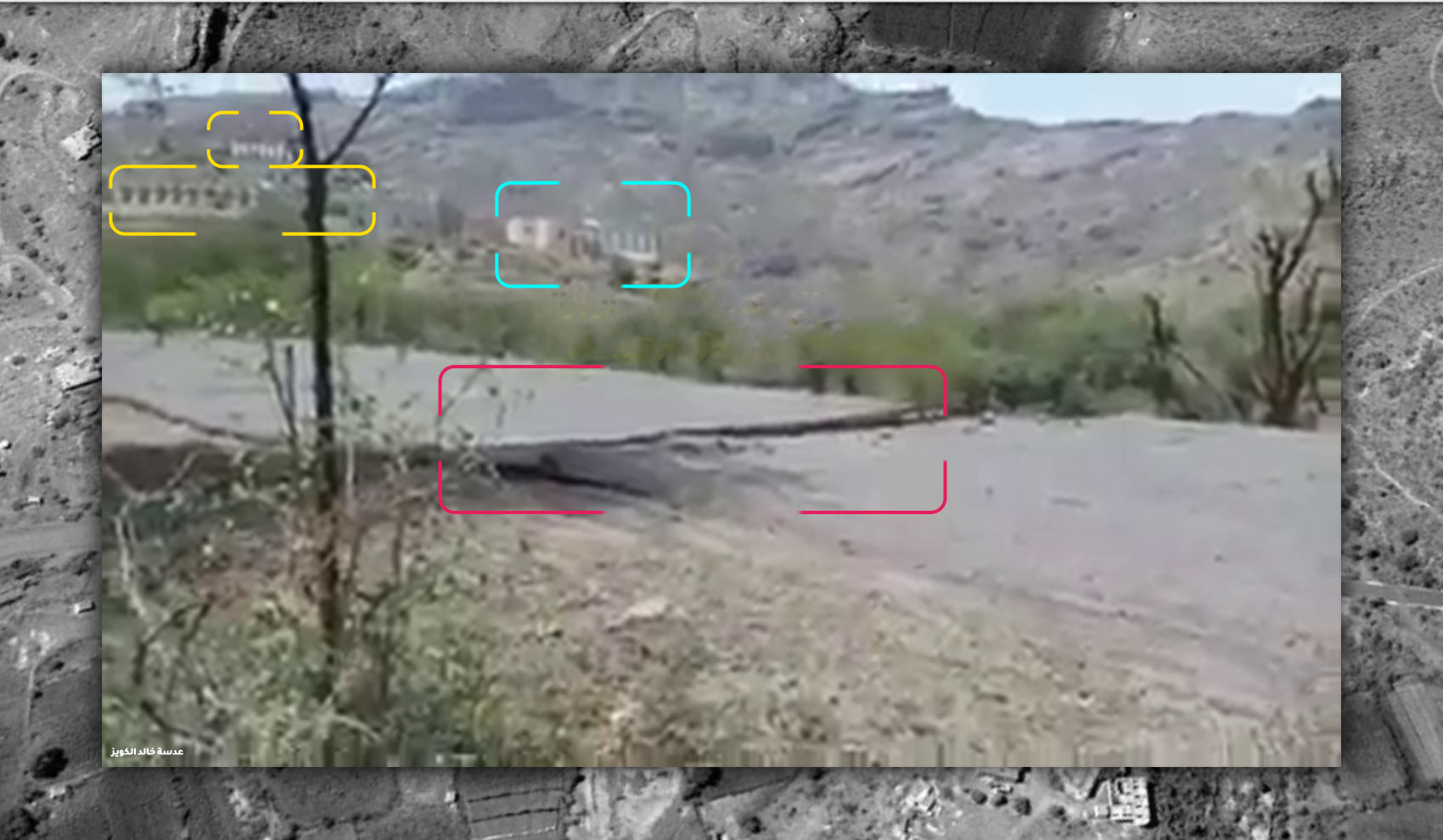 A screenshot of Al-Zayla Bridge from a video posted by Maris Press Facebook page, a satellite image of the Bridge location, Google Earth. 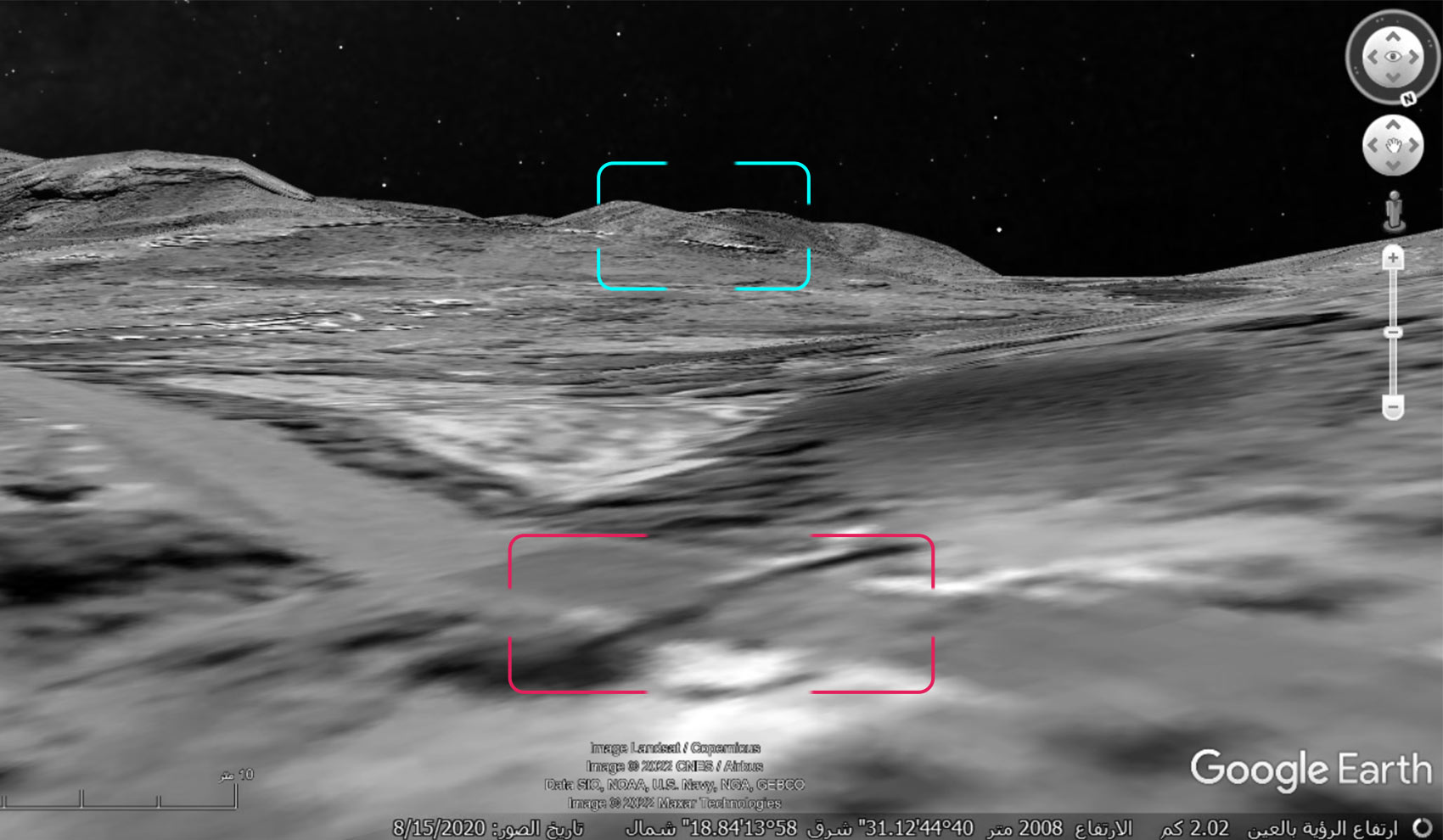 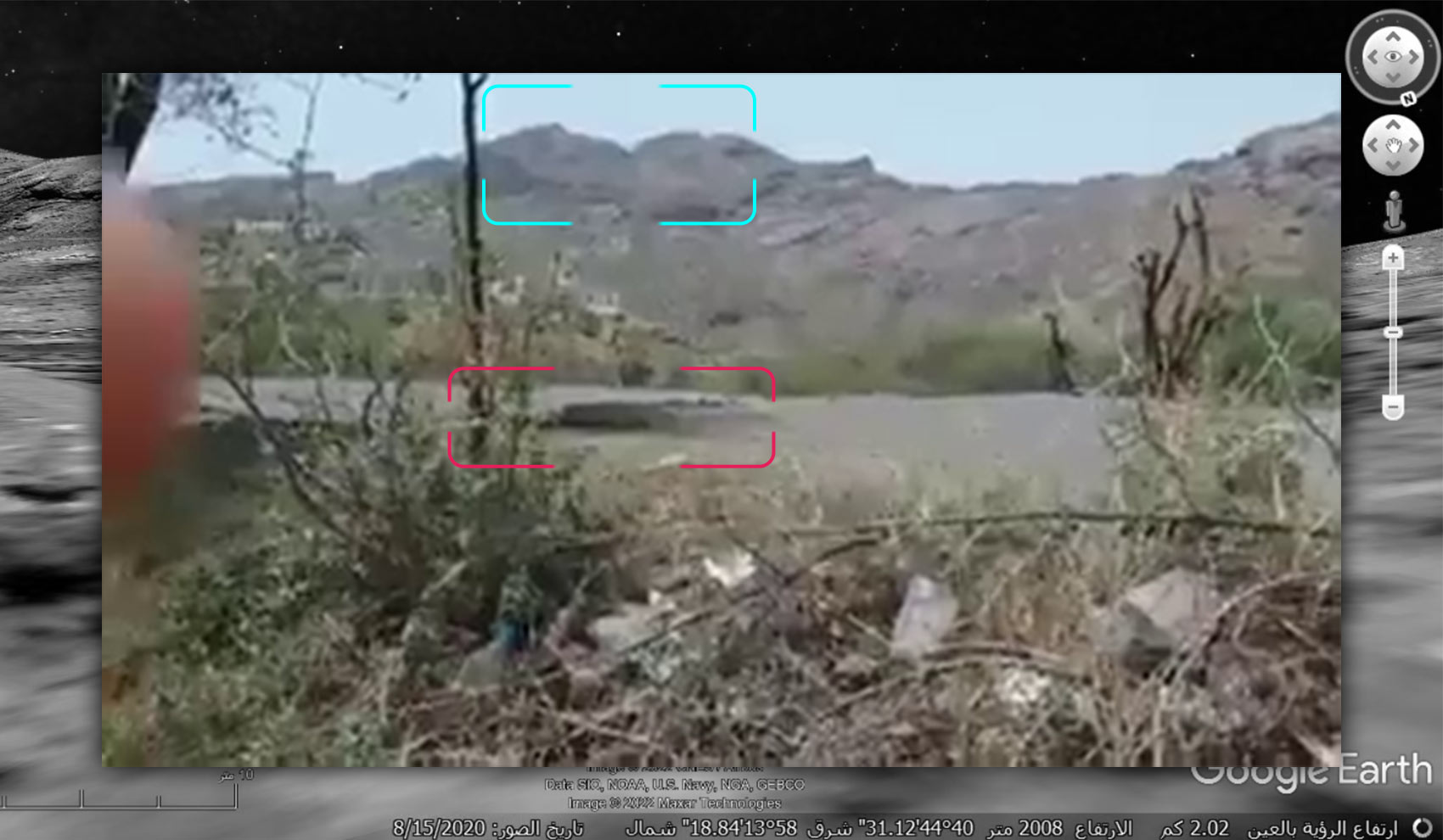 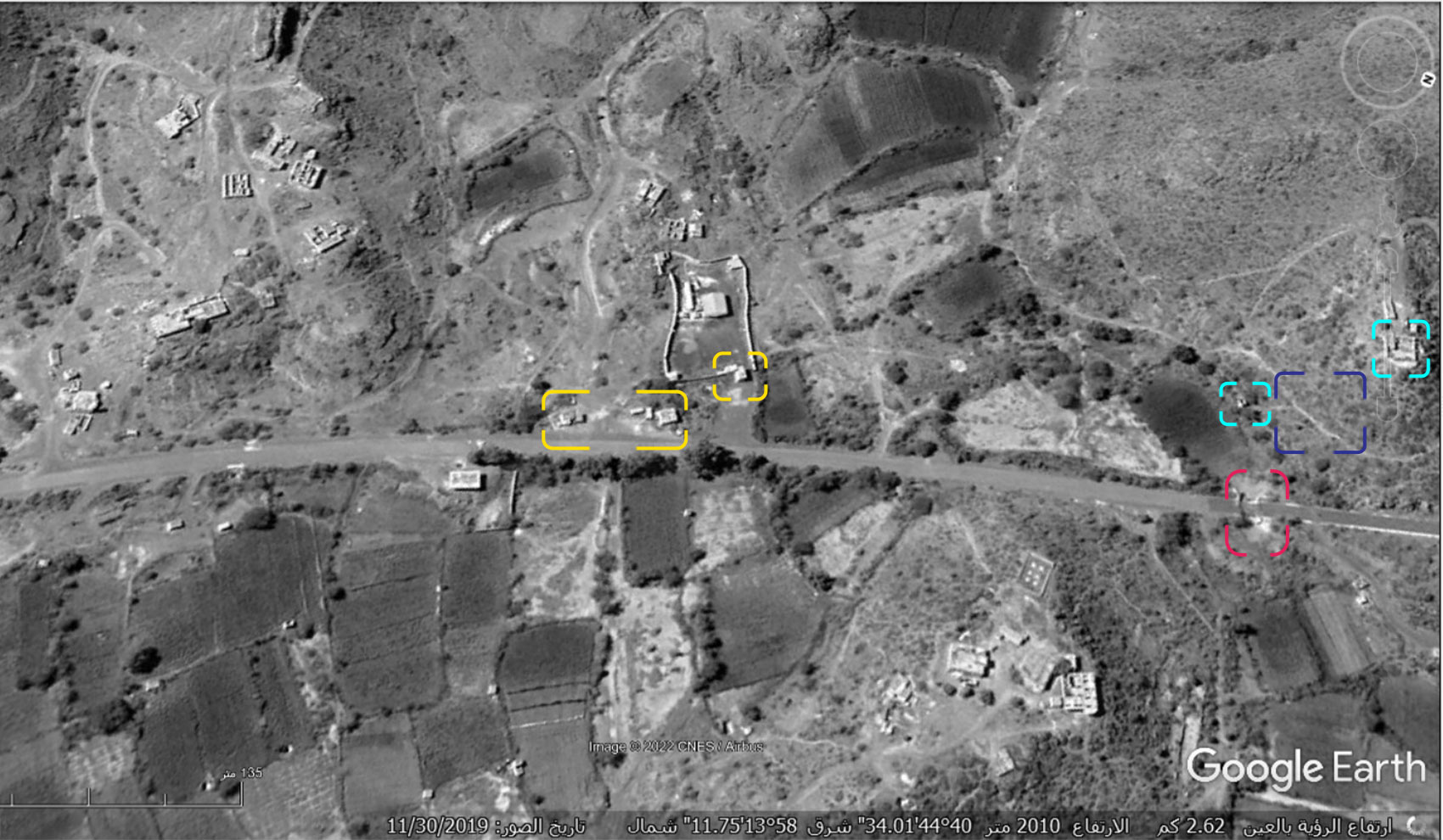 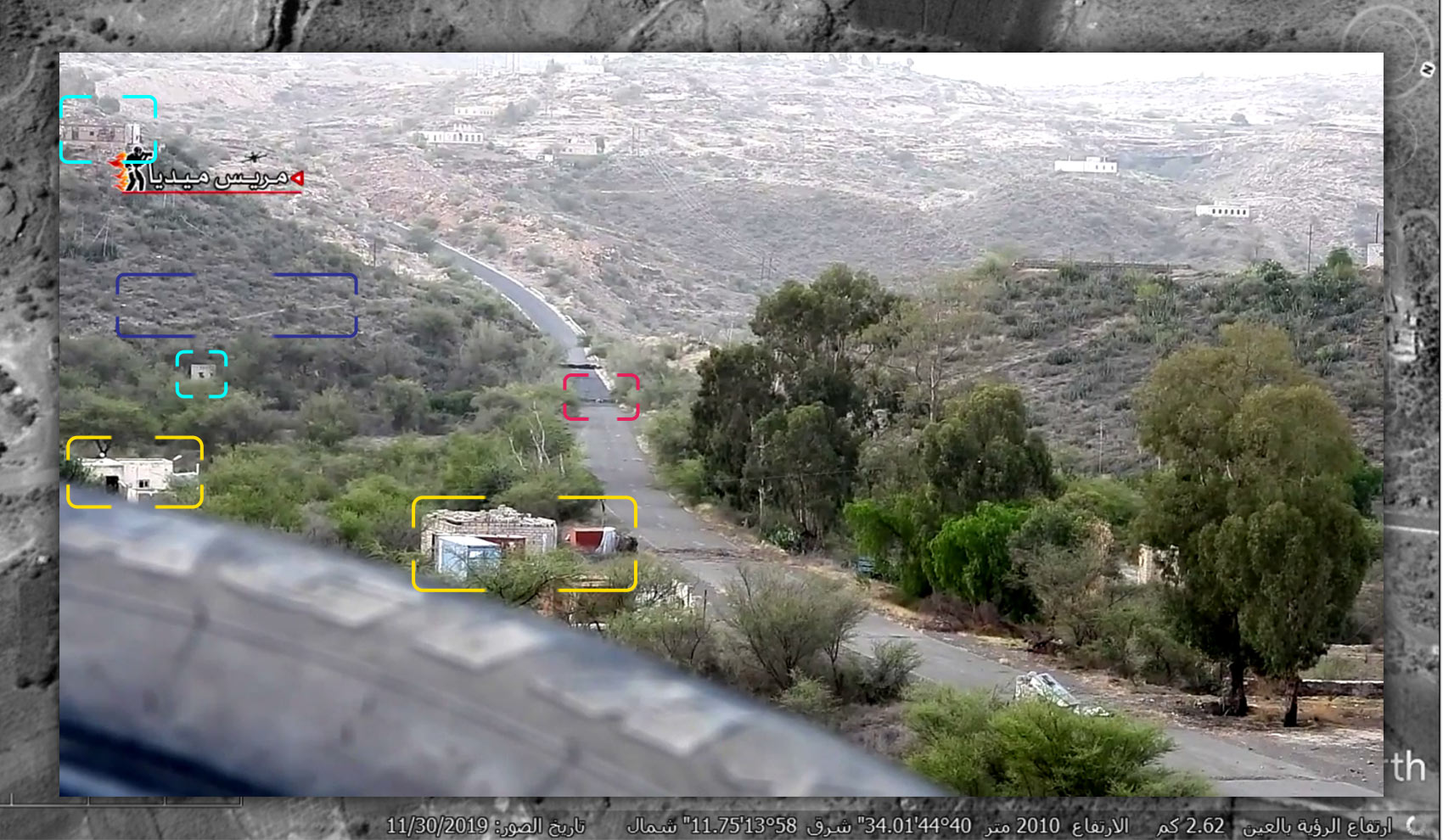 A screenshot from a video posted by Maris Media YouTube showing another destroyed bridge next to Al-Zayla Bridge, a satellite image of the Bridge location, Google Earth.

On 26 May 2019, a bridge on the road linking Qataba and Ibb the Shakhb area, one kilometre west of Qataba was blown up We located the bridge depending on the landmarks visible in the Maris Media YouTube video, at coordinates: 13.851570, 44.686401. The main R125 Qataba - Ibb road is the alternative option for civilians and transport trucks- if the Qataba-Dimt road is closed- for reaching Sanaa from Aden and vice versa, or reaching Damt. The destruction of the bridge in Shakhb area complicates the movement of civilians and trucks on a main road, and the delivery of goods, forcing them to use roads that are rough and difficult for civilians to use, with greater economic cost. 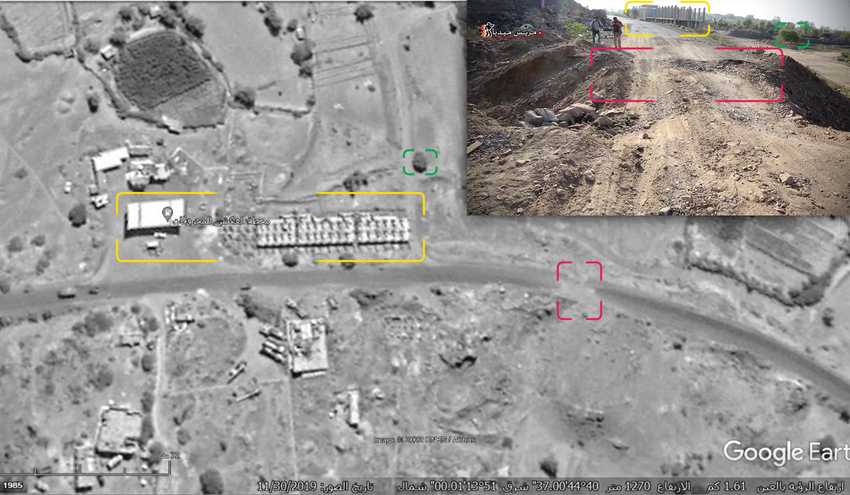 A screenshot from Maris Media YouTube video of Shakhb bridge between Qataba city and Al-Fakher area, west of Al-Dhalea, a satellite image of the Bridge location, Google Earth.

The Qardah Bridge, north of Qataba, and Al-Fakher Bridge, west of Qataba, were under the control of the Houthis, before they retreated after the government and the Joint Forces advanced in those areas. Al-Zayla Bridge is located north of the Maris area on the lines of engagement. On 16 May 2019, Qataba was under Houthi control, according to the Maps and Wars Twitter account. After an attack launched by the government forces and the Joint Forces, Qataba was recaptured, and the battles approached the Qardah area. Twitter accounts circulated images on 20 May from the Qardah area confirming its control, and the next day images showed that the bridge had been blown up. 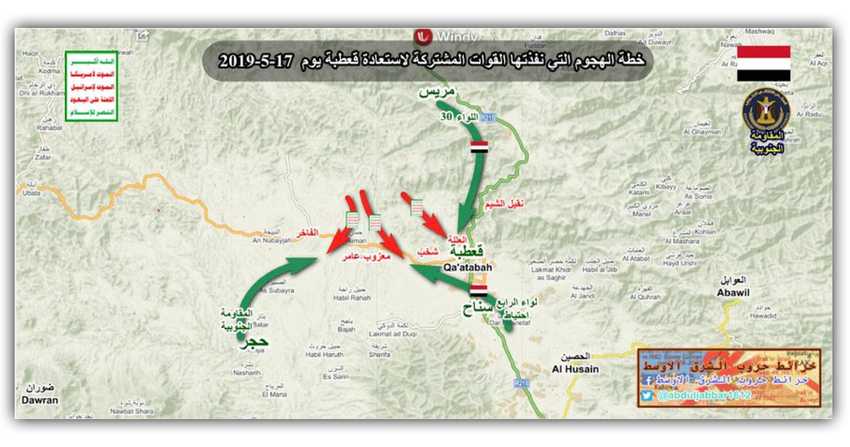 An image from Maps and Wars Twitter account, showing the military situation in Al-Dhalea Governorate in May 2019. 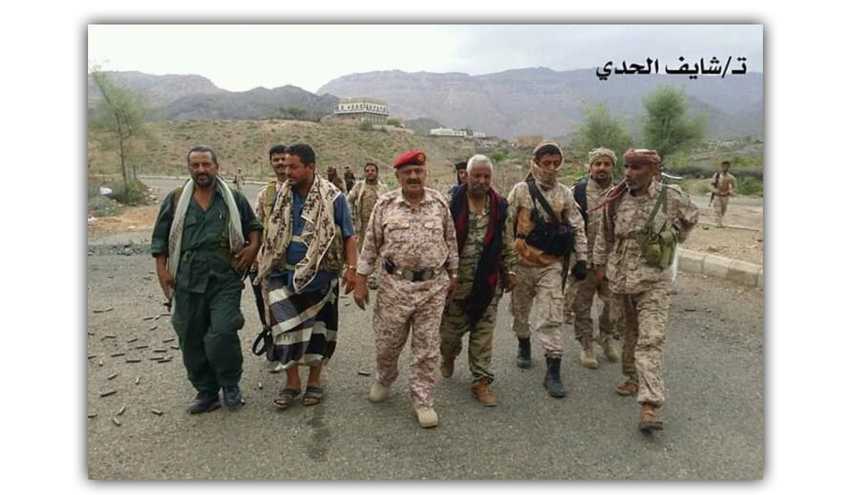 A photo published by Abu Nofan Al-Amari Twitter account, showing the commander of the Fourth Military Region in the Qardah region, north of Qataba city. 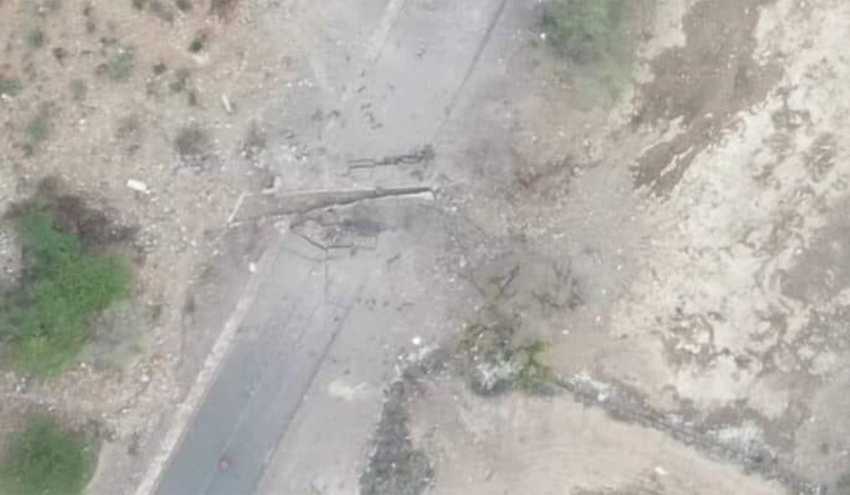 In conjunction with the ongoing battles north of Qataba, other battles were taking place on the western side of the city towards Al-Fakher area. With the government forces and the Joint Forces advancing to Shakhb area on 26 May 2019, a bridge on the main road was bombed in an attempt to impede the advance of the forces that were able to control Shakhb a few days later, and the lines of engagement between the two parties are still in the area between Shakhb and Al-Fakher until now. 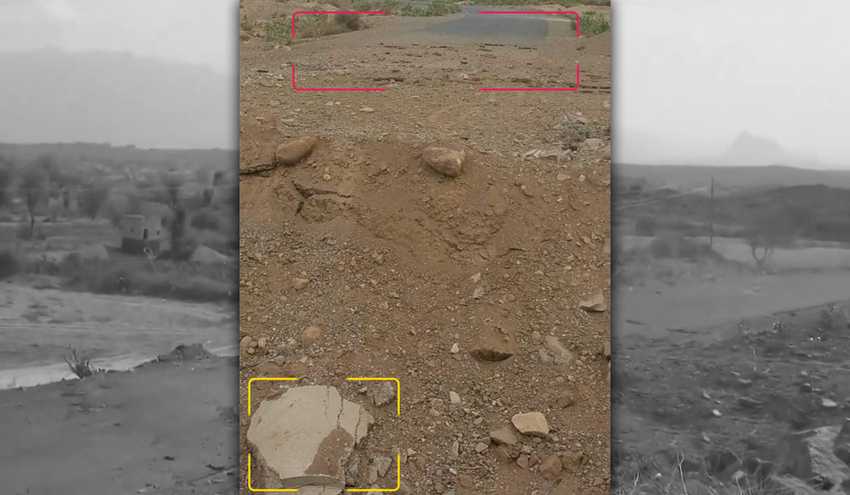 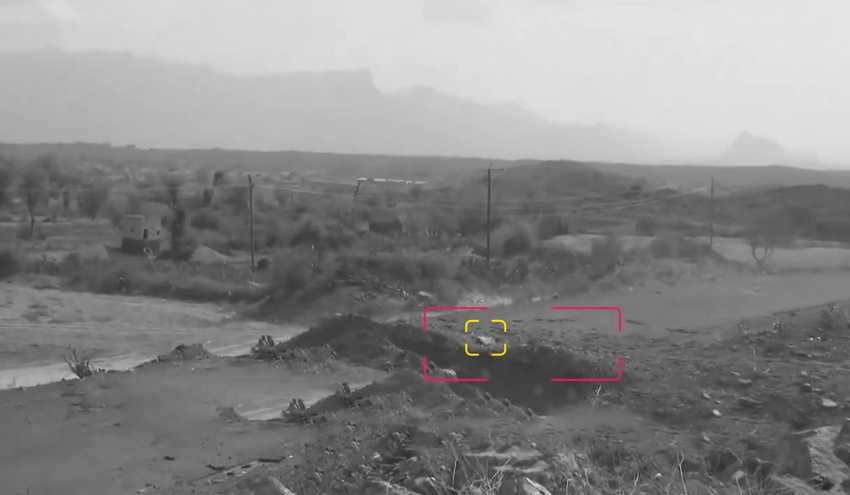 A screenshot from Belqees YouTube video, showing the bridge in Shakhb area after “the National Army” took control of the area

The munitions appear to be improvised explosive devices according to the size of the explosion and the way the debris is blown, but it is not possible to determine which type of explosive was used in the incidents because there are no remnants of ammunition in the visual content that can be analysed. However, the munitions found in another bridge in Al-Dhalea that did not explode; led us to the munitions that the Houthis usually use to blow up bridges. A report by Suhail Channel TV in November 2018 shows the inside of a bridge in Qataba-Damt road containing explosive devices on the walls of the bridge, which were dismantled by government forces. As Belqees report showed, the canisters match those published in a report by the Conflict Armament Research in terms of shape and use. The report indicates that this type, which was found in large quantities on the West Coast, is usually placed under roads in sewage canals. 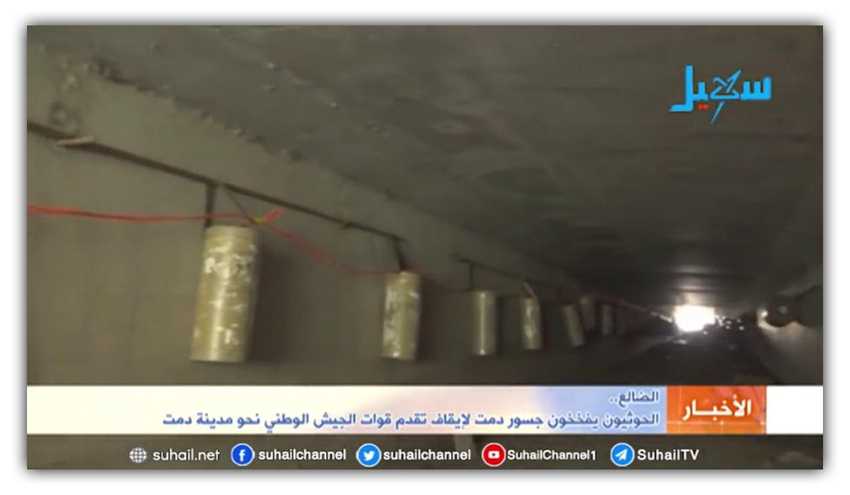 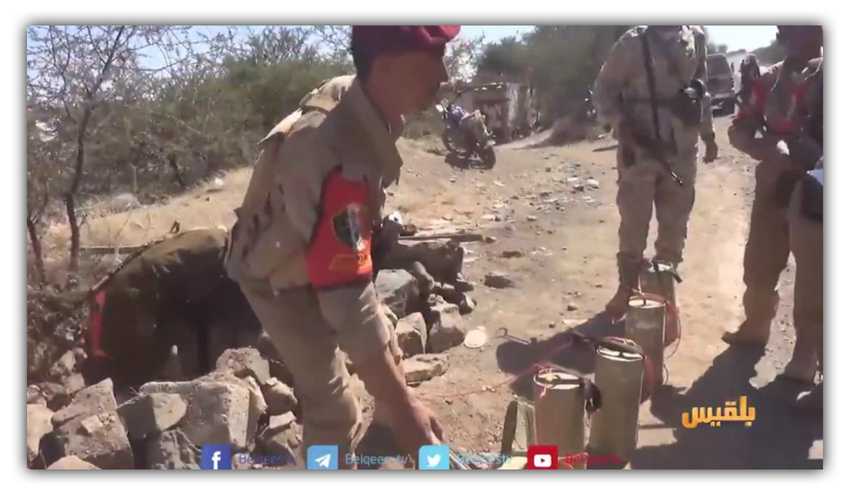 A screenshot from Belqees TV YouTube video of the explosive devices installed under a bridge after they were dismantled. 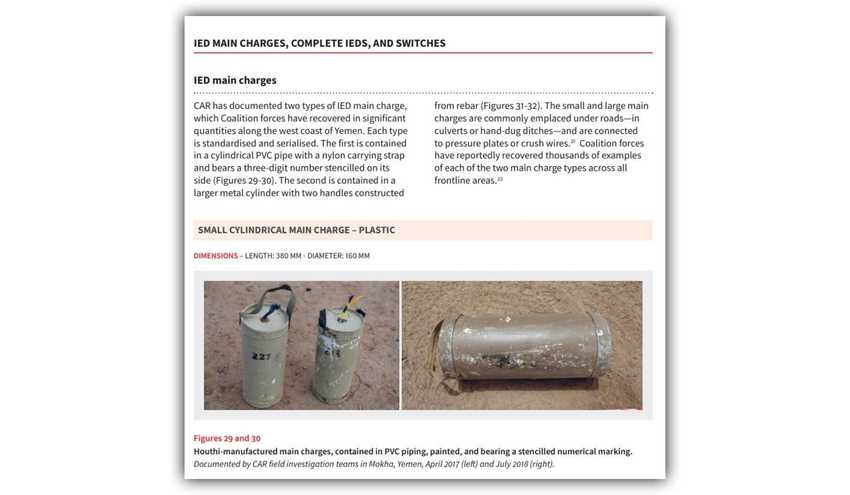 Yemeni Archive concluded that the Houthis blew up three bridges, using improvised explosive devices, on the main roads of Al-Dhalea Governorate. These bridges link Aden and Sanaaa, Aden and Ibb, and Al-Dhalea districts to each other in Qardah, Al Zayla and Shakhb districts. It appears that the bombings took place with the aim of preventing the advance of the National Army and the Joint Forces during from 21 May to 24 July 2019.